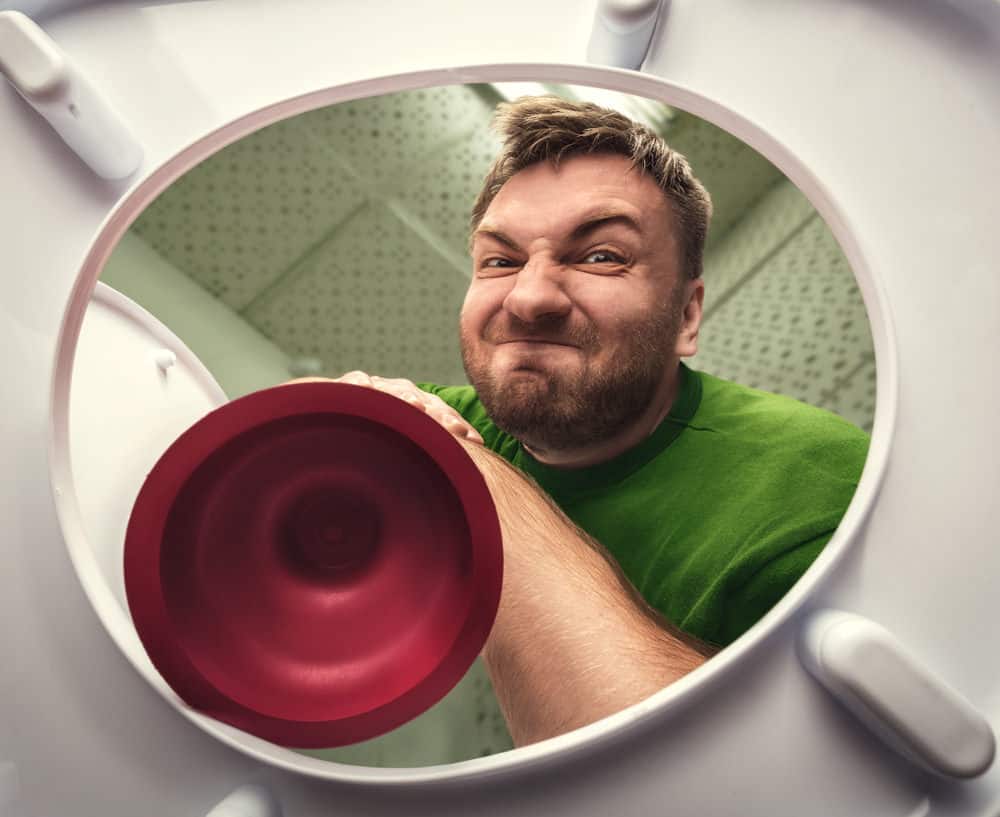 When your toilet is clogged, it’s natural to reach for the closest plunger. Because if you don’t you could have a huge, nasty mess on your hands. But did you ever stop to think if the plunger that’s hanging out next to the toilet bowl is really the best one for the job? And what about other drains in the home? Do they need the same plunger type or something else? We’re here to answer all the plunger questions you probably never thought to ask.

When it comes to toilet plungers, it’s really about knowing which kinds of drains a plunger is designed for. That may be a toilet, the bathroom sink, the kitchen sink, the bathtub/shower or an industrial drain. 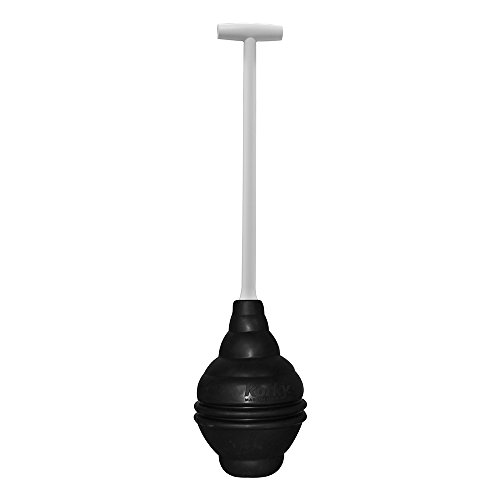 To picture this one, you’ll need to think old school. It doesn’t look like a modern beehive box. Instead, it’s like that bag full of honey — and stinging insects — hanging from a tree.

It’s narrow at the top where it connects to the plunger stick. In the middle, it widens. Then it narrows again at the bottom to perfectly fit over most toilet drains. This narrow tip is called a “flange“.

This design works well because if you have a wide drain you can press the narrow flange further down into the hole to create the seal you need to plunge. It also works on narrow drains as the flange can rest on them, creating that seal. 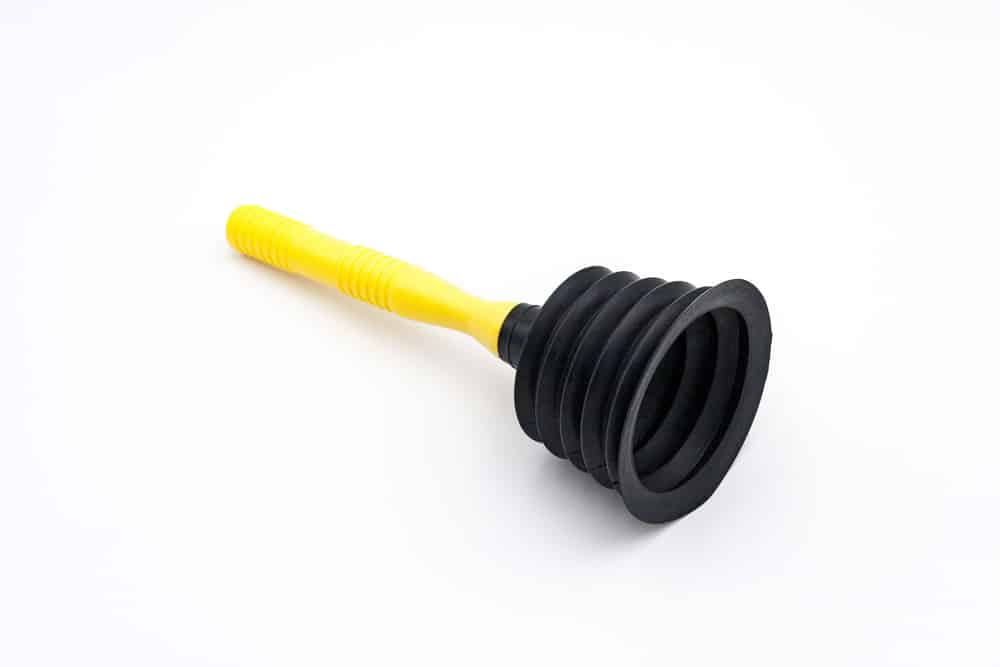 Blacksmiths once used bellows to draw in air and direct it onto a fire to make the fire hotter. Given how common and important blacksmiths once were, forging everything from weapons to horseshoes, it’s no wonder that someone might apply a similar design to a toilet plunger.

Or you might think it looks more like an accordion with folds that allow it to expand and collapse quickly. If you thought of an accordion instead, you’re not far off. In fact, the bellows-style plunger is also called the accordion plunger.

This type of plunger gives you extra force with which to plunge as the bellow creates a vacuum sucking a large amount of water into it before you force it out quickly. This repeated displacement of the water helps dislodge even stubborn clogs.

So if you have a toilet that repeatedly clogs, you may need this extra power. But don’t tell your plumbers we told you.

Like most heavy-duty devices it does have its drawbacks, though. It’s larger and may not fit as discreetly in a bathroom, especially if the room is on the smaller side. If you have a stubborn toilet (or small children), you may want to find somewhere to store this while keeping a smaller traditional plunger next to the toilet.

You’ll probably find this one most recognizable. It’s usually a reddish-orange or black rubber with a wooden stick. The base is in the shape of an upside-down cup and may or may not have a smaller flange underneath to help you create suction. Although some people try to use them, plungers without a flange do not work well on toilets. So you should always get one with a flange for your toilet, according to home improvement expert Bob Vila.

While small, the traditional plunger takes more human force than the other two do. Each plunge only slightly displaces the water so it may take some time to work through a tough clog. But for the quick clog, the compactness of the traditional can’t be beat.

a. Traditional Plunger with Flange 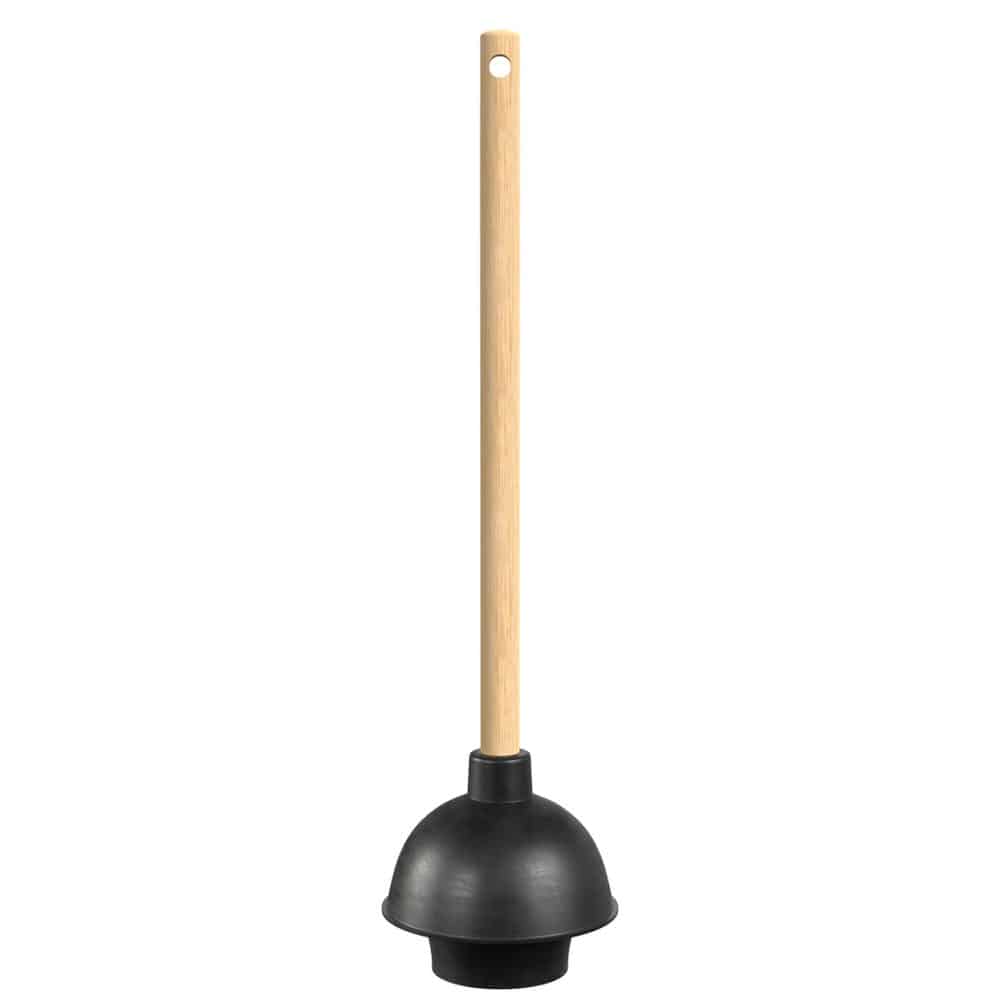 b. Traditional Plunger without Flange 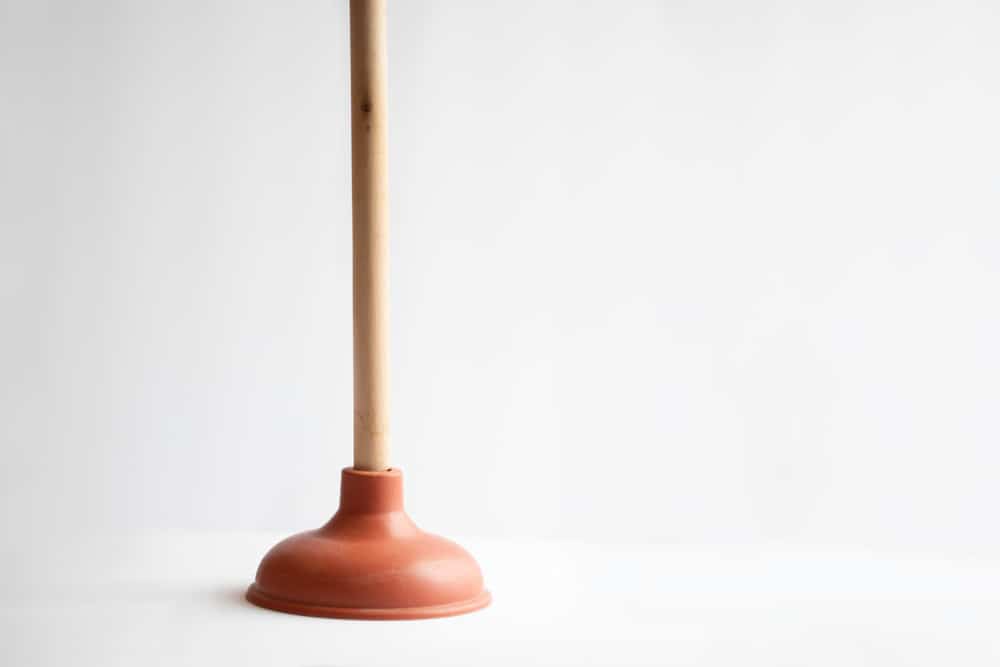 More recently, we’ve seen the invention of automatic plungers. These plungers are powered by CO2 gas and are very powerful. It’s fast and easy to use. Just insert the tip firmly into the drain hole then send a burst of CO2 into the drain to dislodge the clog.

As a negative, you do have to buy single-use CO2 canisters. But as a positive, this clears the clog more thoroughly than other approaches. So you probably won’t need to use it as often. 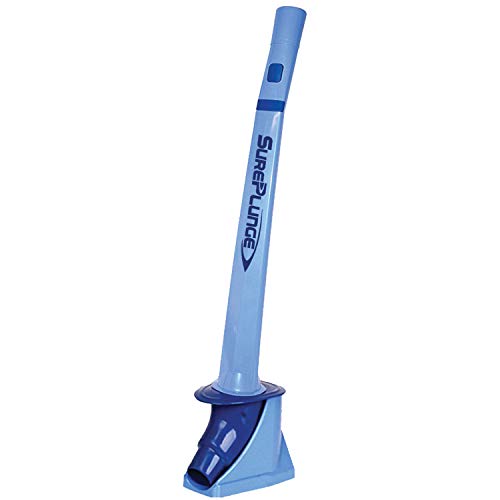 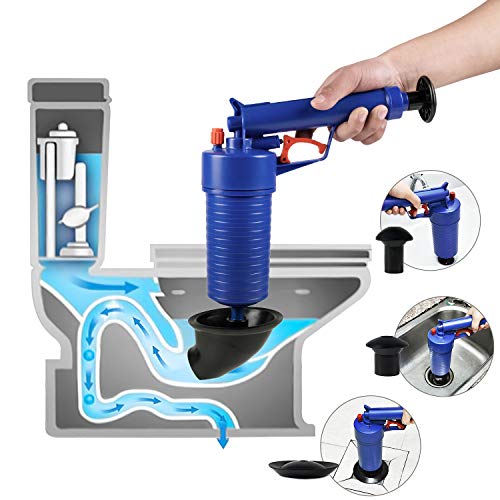 Additionally, you’ll find variations on typical plungers from various companies. For example, this bellows plunger on Amazon is longer than the typical bellows with a shorter handle, making it easier for everyday use like a traditional plunger while still giving you the greater power of a bellows. These non-traditional approaches to tried and true designs may be exactly what you’re looking for. 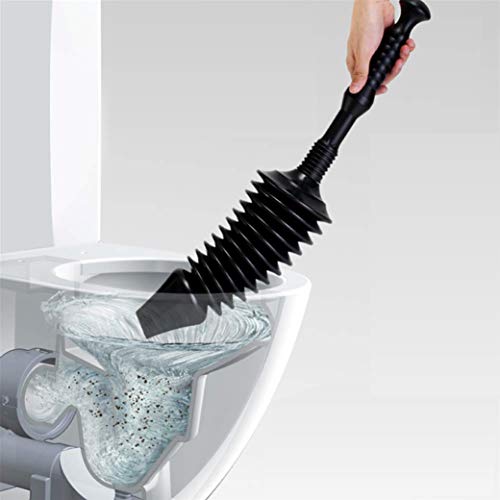 Another modified plunger combines the traditional plunger model with a manual bicycle tire pump. So you pull up and press down on a handle repeatedly, creating a vacuum in the drain that pulls the clog free. 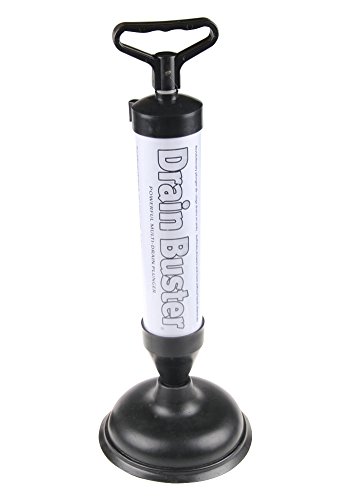 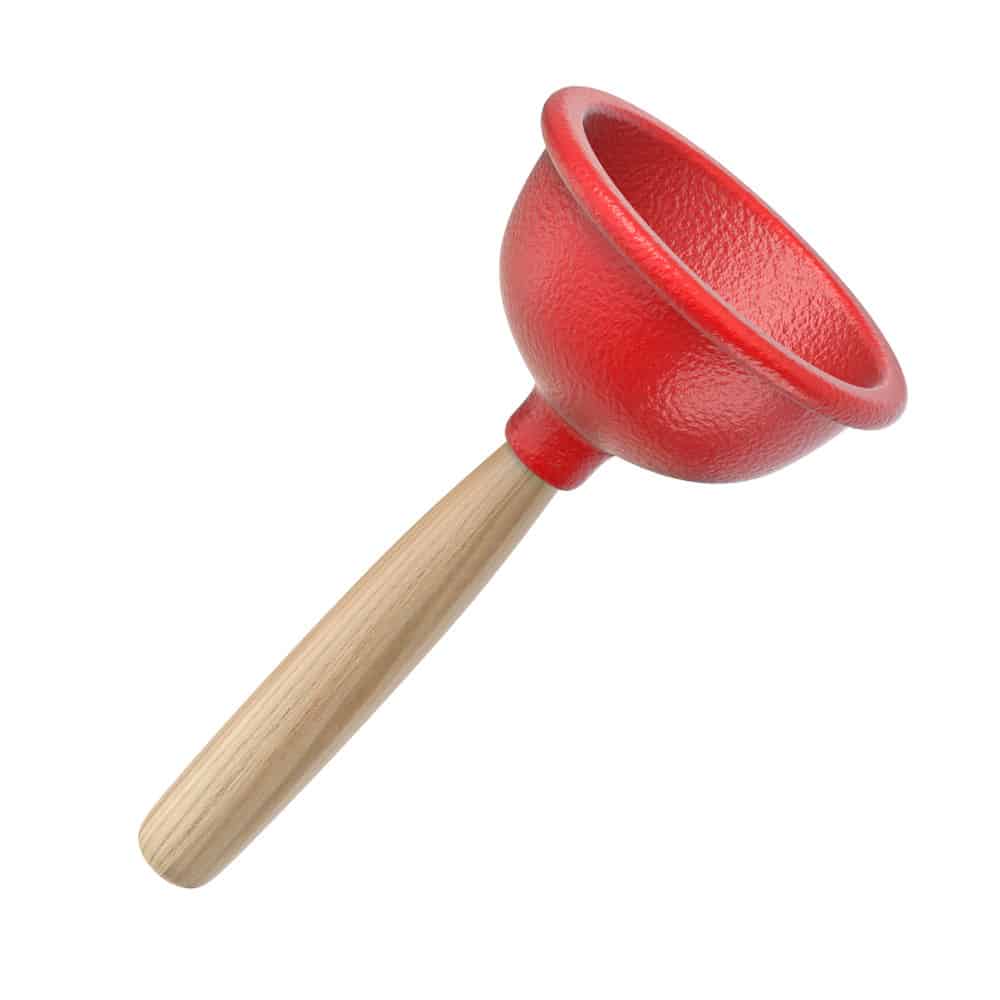 Sink plungers often look similar to a traditional without the flange. And they have a much shorter handle. That shorter handle is important because the sink drain is usually closer to walls, the ceiling, faucets and your eyes. A shorter handle allows you to plunge with less leverage and more upper body control. 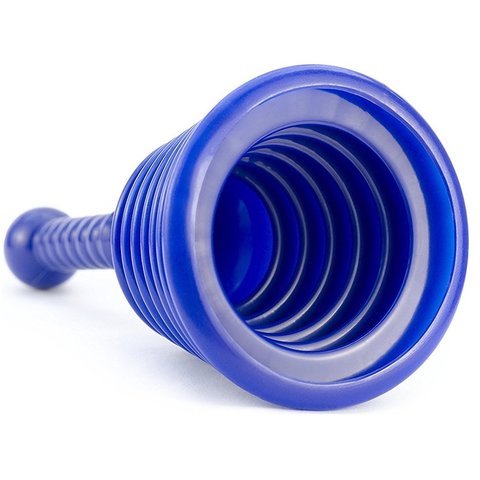 You can use either a toilet or sink plunger for the tub drain, but ideally, you won’t use the same one you use on the toilet. Get a separate one. Label it. And keep it away from the toilet so that a guest doesn’t use it by mistake.

A taze plunger is another plunger that you might mistakenly think works for your toilet. But taze plungers are generally only effective on very large pipes and drains, not found in the typical household. These plungers have a disc formed to fit a specific pipe size for a certain use by a professional, and a steel rod that pushes the disc into the pipe to create a seal. Since taze plungers as designed for a specific purpose, they vary in appearance and you won’t find them readily available in a home goods store or Amazon.

How to Use a Toilet Plunger Propery

Automatic plungers will have their own sets of instructions. And it’s vital that you follow them precisely because, otherwise, you waste a single-use tank of CO2. Manual plungers, on the other hand, follow generally the same principle.

Beehive and bellows plungers, on the other hand, pull significant water up into them. This water is then forced down against the clog dislodging it. For these two, take slower more deliberate plunging approach. And visualize that clog getting swept away.

Here’s a video showing you how to plunge a toilet properly (most people do it wrong):

What is the Safest & Fastest Way to Clean a Plunger

While you may be tempted to just rinse it off in the shower, think again. Toilet plungers harbor all kinds of germs that can get you seriously sick. Ideally, you should wash your plunger immediately after use and with this method that’s easy to do even when you’re in a hurry.

Follow these steps, which you can do in under five minutes.

As long as you keep a bottle of bleach in the bathroom and don’t have to hunt for it, this should take only four to five minutes, so no excuses. If you don’t have bleach, 1-2 cups of vinegar added to the toilet bowl works the same way.

Here’s a video on how to clean a plunger:

How to Tell When Your Plunger Needs to be Replaced

Your plunger is designed to create a vacuum. So if it can no longer do that, it’s time for a new one. Some common signs of this are:

In the average household, you may need to replace once a year because if you’re rinsing the plunger correctly each time you use it, this will slowly erode the rubber. However, this really depends on whether it’s working. If you do choose to keep a plunger well beyond that year mark, you may want to make sure there’s a backup in the house because you could have a disaster on your hands if you happen to find out that your plunger no longer works while the toilet is overflowing.

Shutting off the water won’t do you any good because the water entering the bowl is coming from the basin behind the bowl.

Where to Buy a Plunger?

Like so many things today, you can get them on Amazon or eBay if you want to get it online. You can find most of the plungers discussed above in online marketplaces like these. You’ll even find a beehive plunger that looks like the poo emoji because everyone needs one of those. It’s from the makers of Squatty Potty, which was featured on Shark Tank several years ago: Poo Emoji Plunger.

If you’d like to see your plunger in person before you buy it, you can still get plungers at places like Target, Walmart, Home Depot and Lowes. You may even find a small selection in your cleaning supply aisle at the grocery store or in a gas station but expect to pay more there.

How Was the Plunger Invented?

The story of the toilet plunger is a curious one.

Like all functional tools, the plunger came into existence to solve a problem. It’s simple yet effective design makes it easy for even a young child to use and it’s been keeping our plumbing bills down for over 100 years.

But originally, the plunger wasn’t invented to solve the problem you’re thinking of.

The first known patent for a plunger-type design was issued in England in 1777. It was called the “plunger closet”. But instead of the plunger being the emergency device for rising waters that it is today, this patent was for a plunger that could be used to flush the toilet, before flushing toilets were widely available. In the plunger closet, the plunger’s ancestor was on the side of a plunging closet. When the plunger was pulled out, it released the water and waste from the bowl. The waste then traveled down into waste pipes, the precursor to modern plumbing.

While quite inventive, the device wasn’t quite sanitary as the plunging action actually drew some of the waste into the plunger itself. The waste would then sit there, rot, and smell. The plunger toilet was short-lived for this reason. Just a year later, Joseph Bramah got the patent for a flush valve toilet, which is very similar to what we have today.

It’s unknown when someone put two and two together as the plunger has no clear inventor. It may have come into existence in several places at once as unconnected individuals with toilets all sought to find a more sanitary way to quickly clear a clog.

No patents for the plunger in its current state exist or have ever existed. But it’s believed to have come into existence somewhere in the mid to late 19th Century around the same time as the Industrial Revolution and the invention of the automobile. The synthetic rubber needed to make plungers affordable and durable was becoming a more common material around that time.

We do know that the modern plunger would have to have been invented after 1852 when the s-drain for the toilet was invented. Otherwise, the design would not work.

On more than one occasion, a traditional plunger has been used to save someone’s life. While it may seem like a bit from a comedy routine, according to the Chicago Tribune, plungers have been used to perform chest compressions when the heart stops beating. And caregivers have been able to successfully re-start their loved one’s hearts with them. The FDA has approved a CPR device inspired by the toilet plunger that doctors and other healthcare professionals now use during CPR. It’s only available by prescription.