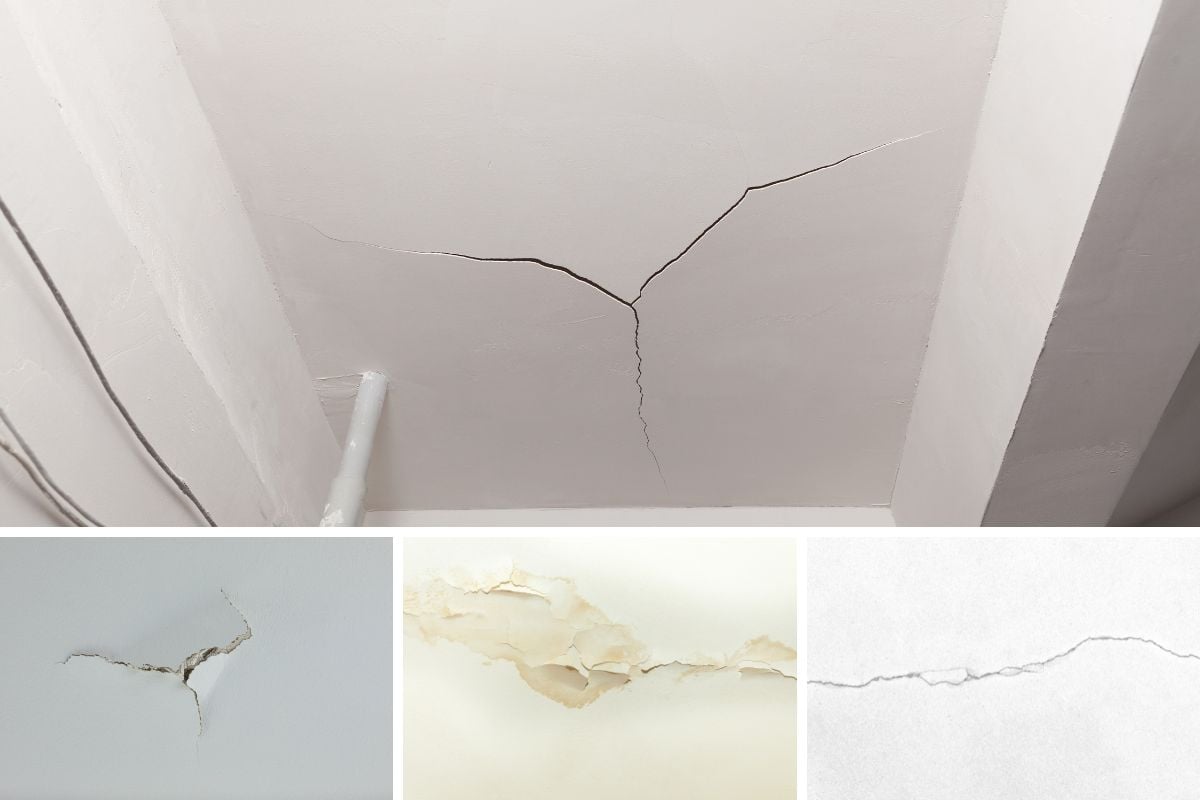 A house is both a home and an investment. It’s understandable to be worried at the first sign of a ceiling’s drywall splitting apart. Damage like ceiling cracks puts its value as both at risk, and residential buildings account for 37.3% of structural collapse deaths.

Ceiling cracks point to some flaw or malfunction in the structure of the ceiling, and the potential risk ranges from negligible to immediately life-threatening. Cracks are commonly divided into several types based on their location, shape, and concurrent symptoms. 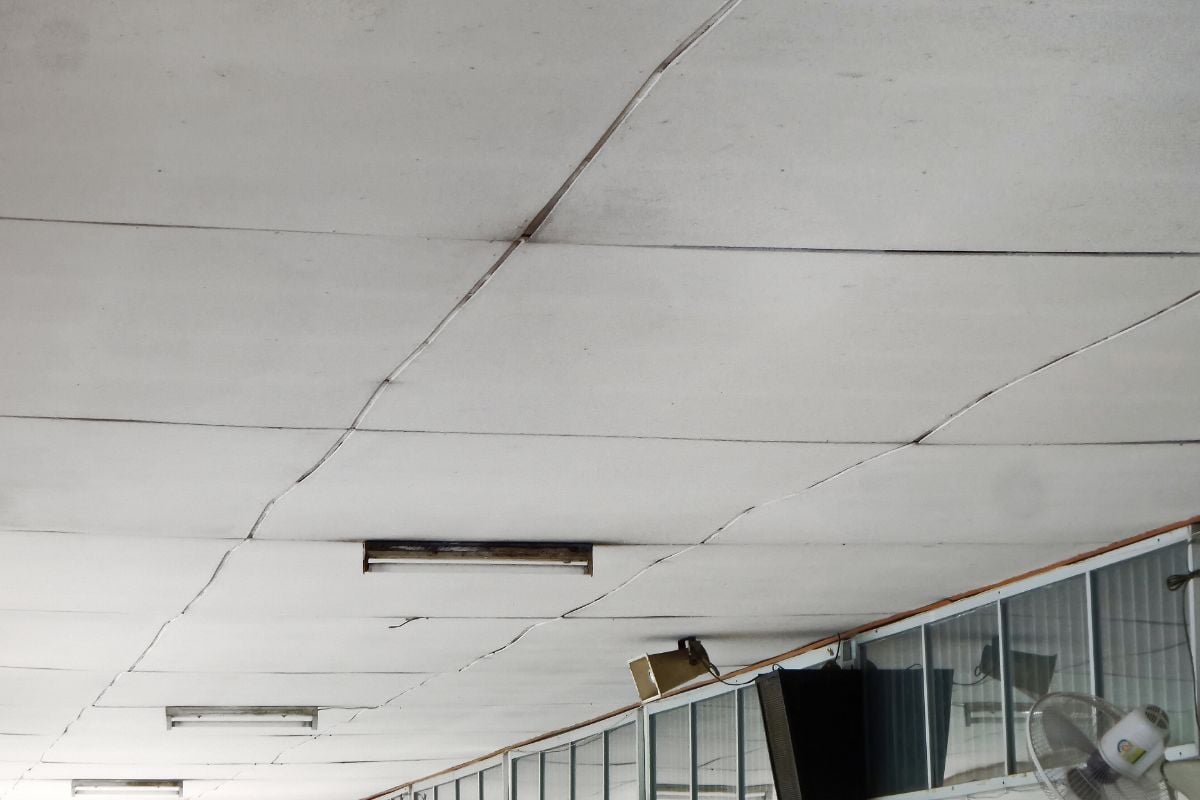 A cracked ceiling that droops, sags, or is otherwise out of position shouts the loudest structural warning signs. Although the drywall used for most roofing isn’t the toughest material, it’s still strong enough that a droop shouldn’t happen without an underlying problem that demands attention.

First, the structure of the building that supports the ceiling could have been damaged. Perhaps a support beam rotted after a few decades of service, the foundation shifted enough to crack the drywall, or an alteration that removed a supporting wall could have reduced the ceiling’s ability to bear a load. Whatever the exact cause, this kind of damage will be permanent and progressive until fully repaired.

Next, the ceiling could have too much weight bearing down on it. Multistory buildings with heavy furniture on the upper floors might see a bit of sagging, and it can happen during heavy precipitation like snowstorms that overload the roof. Removing the weight will help solve the problem, but permanent damage may already have been done.

Water damage is the other common cause of a sagging ceiling. Pipes run through the ceilings in many styles of house and general building construction. Unless there’s a sudden and substantial leak filling up the physical space, damage from water over time usually comes with other symptoms covered in the next category of ceiling cracks.

Is a sagging and cracked ceiling dangerous?

In a worst case scenario, a sagging ceiling that’s riddled with cracks is a sign of imminent structural collapse on some level. If the sag is noticeably getting worse or is accompanied by other warning signs like the structure moving or audibly shifting, then immediately vacate the area until professional help arrives. It may not collapse, but it’s not worth risking injury.

For a minor sag, the danger ranges from immediate to inevitable. Check the floor above the ceiling in multistory structures to make sure there’s no corresponding sag that could give way if someone were to walk over it. There is some level of risk to staying in any building with a sagging and cracked ceiling, so err on the side of caution and seek a professional opinion as soon as possible.

Can I repair a cracked and sagging ceiling?

A ceiling that’s cracking and sagging may be repairable on your own when the damage is minor and stable, but it tends to be a professional-level repair job. The likelihood of more serious issues like broken water pipes or rotting structural elements could drastically increase the difficulty.

Minor sagging that’s localized is repairable by replacing the drywall. If you’ve ever replaced or repaired vertical drywall, the process is similar if trickier due to the height and orientation.

The convenient part is that removing the damaged ceiling will also give you a chance to peek at the structure above. Even minor drips or cracks can contribute to ceiling damage, so don’t neglect any potential causes in your inspection. A single drop of water a minute is about a third of a cup of water every day. 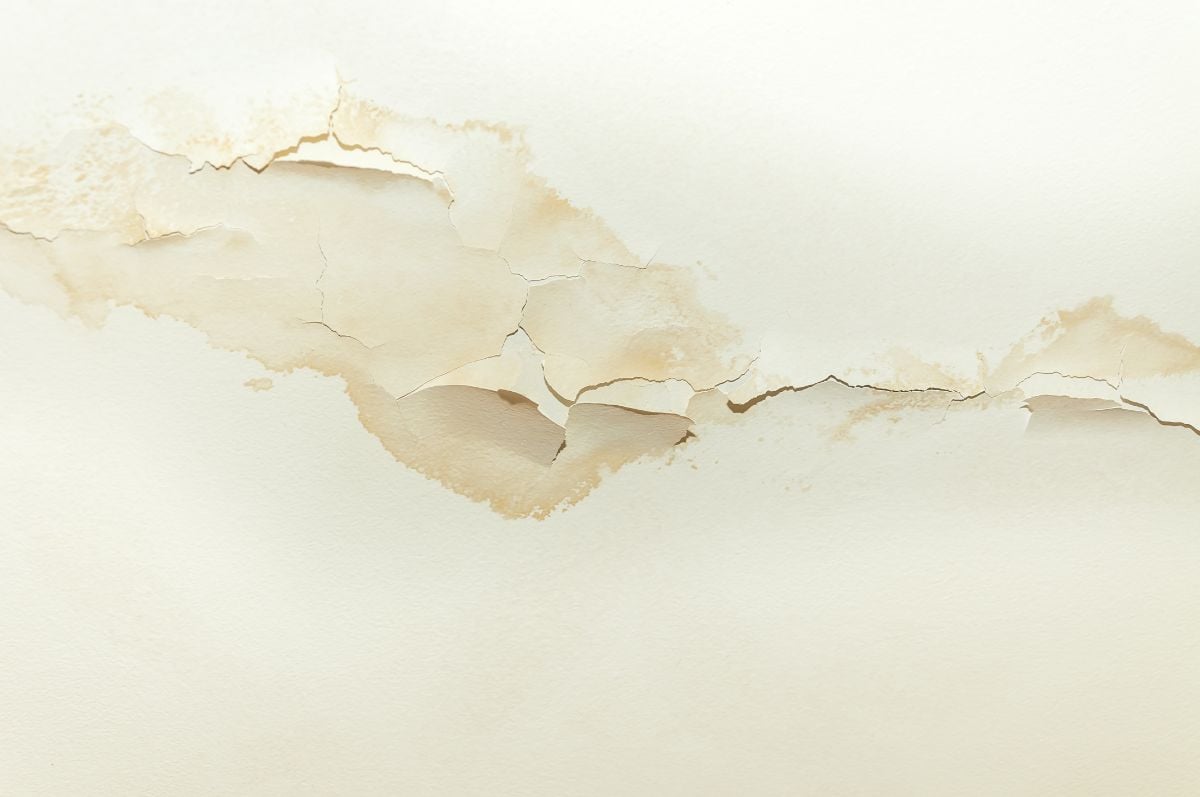 Sometimes a crack will have an area of discoloration around it. The material might turn yellow, black, green, or just look a little darker than normal. Water damage stands as the most likely culprit if the crack has the accompanying discoloration..

When a pipe leak, common household materials like wood and drywall will absorb the water and other liquids that come out of it. The material then warps, bloats, and rots. Drywall is a relatively soft form of wood, so it bloats and rots faster than studs and supports. That leads to cracking along with the changes in color.

Discoloration and cracking can happen over time from just the dampness in the air or rainwater managing to reach it, so there may not be a leaky pipe to blame.

How dangerous is a cracked and discolored ceiling?

Discoloration with the cracking is an immediate concern, but it’s only an emergency if there is a sudden change in the color, the discoloration is accompanied by sagging, or you discover a large section of compromised material. Discolored ceiling panels may also be a health concern if the water damage has facilitated mold growth on the drywall panels.

Water damage will definitely lead to serious issues if left untreated, so don’t waste any time on calling a professional for a case-specific opinion and assistance with repairs. If the ceiling is below a higher floor, mark off the corresponding section on the floor above to warn of potential structural issues until the issue can be evaluated.

Can a discolored and cracked ceiling be fixed?

The difficulty of repairing a cracked roof with discoloration will depend on the cause and how early the problem is diagnosed. Replacing the damaged sections of the ceiling may resolve that symptom, but a leaky pipe above it will just cause it to crack again later.

If the damage is due to the age of the material or you remove the primary cause, then fixing the damage should be within the skill level of a DIY project. Call in help as soon as you can if you can’t identify or fix the issue causing the damage or if it has spread to a large area with significant cracking. The longer you wait, the more likely it will progress into serious damage that costs much more to repair and puts your family at more risk.

When a crack extends down both the ceiling and the wall, the weight of the building is uneven and trying to pull itself apart. It could have been for just a moment, such as when an earthquake rattles the structure. The panels of the interior walls and ceilings are relatively weak, so they are the first to start caving to the demands of physics.

Is a crack that travels on the ceiling and wall dangerous?

A crack that goes from the ceiling down the wall is a major warning sign for problems with the foundation or other support structures. You may not have to evacuate the building immediately if it’s a very thin crack with no other warning signals, but the house should not be occupied until inspected if at all possible.

Can I fix a crack that travels from the ceiling down the wall?

Call for a professional inspection and repair as soon as a crack traveling from the ceiling down the wall is discovered. The higher likelihood of major structural issues warrants an expert’s eye on the job.

The crack itself may be fixable just like any other form of drywall damage. This repair would only cover the superficial problems, so don’t patch the crack and ignore the house falling apart. 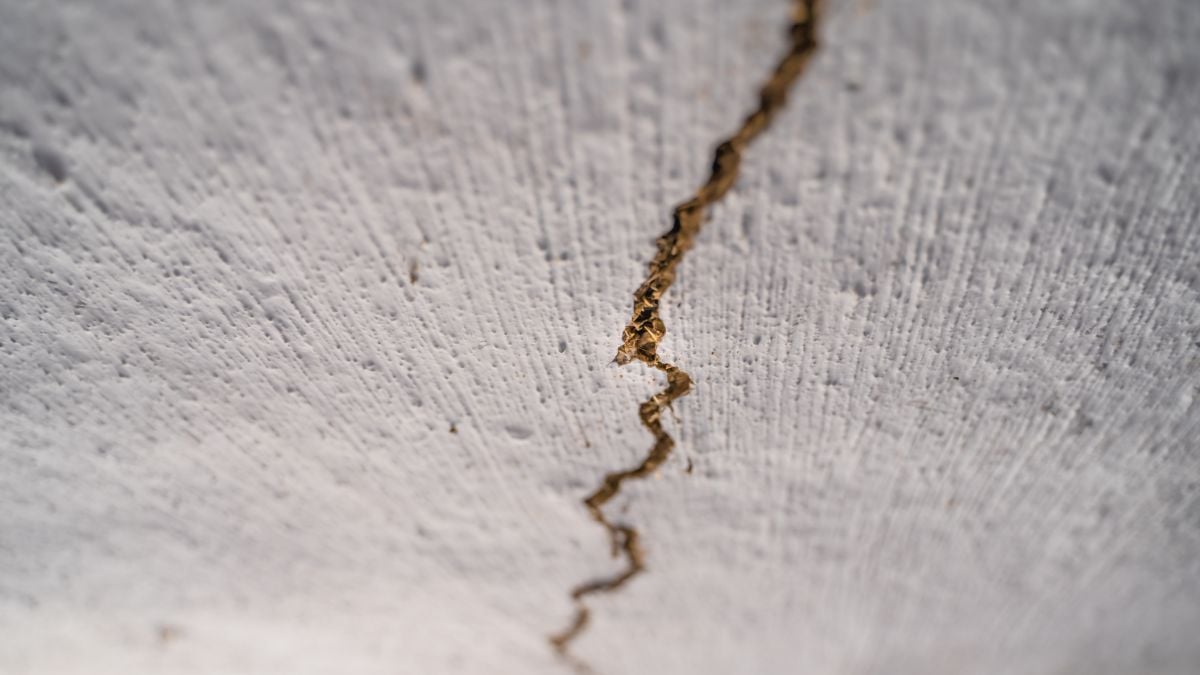 Trails of hair-like cracks cover many ceilings. The cracks are so thin that it may seem like the joints are pressing into one another. In most, they only exist on the very bottom layer of plaster coating for the drywall panels.

It’s easy to think of houses as stationary, but they shift and move with the environment. The plaster is continuously undergoing small changes in temperature and humidity that cause it to increase and decrease in size. These minor motions are the most common cause of hairline ceiling cracks.

Are hairline cracks in a ceiling dangerous?

The danger of a hairline crack in the ceiling depends on the number, length, size, and depth of the cracks. Thin and shallow cracks on the surface are superficial and not dangerous. Larger hairline cracks could indicate a structural problem, especially if they suddenly develop.

Can I repair hairline cracks in a ceiling?

Small hairline cracks are primarily a cosmetic issue and can be fixed quite easily. Sand down the outer layer, coat the cracks with drywall putty, and let it dry. Paint over the repaired sections if necessary to match the surrounding ceiling. 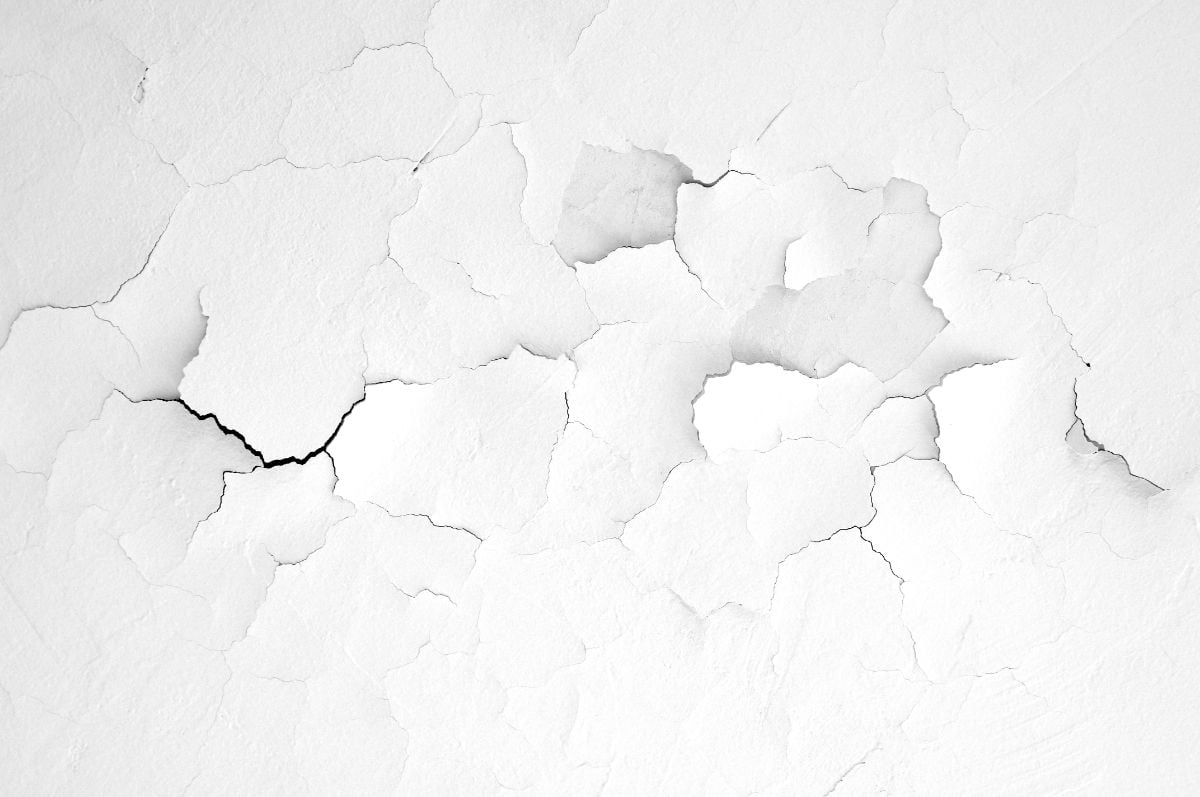 Some cracks look like a spider took up residence inside the drywall and tried to make a web. Hairling cracks and web-like cracks are similar, the potential causes are slightly different.

Ceilings may have multiple layers of putty and paint. As the coatings sit after application, they dry up while gravity continuously pulls them downward. With thicker coats or additional layers, this creates ridges that crack and separate as they dry.

Can I repair web-like cracks in a ceiling?

Web-like cracks in the ceiling are typically an easier repair project as long as the cracks are only surface-level. The extra material will need to be sanded down so you can apply a new layer of plaster or putty.

Straight cracks are a common sight on ceilings made with drywall panels. The installers use tape, drywall putty, or a similar material to seal the joints between the panels. When there’s not enough joining material, the gaps between the panels start to show.

Despite being called “straight” cracks, they can have minor wobbles along a long line or unique shapes in areas where the drywallers had to cut panels to fit the space.

Is a straight ceiling crack dangerous?

Since the source of the crack is most likely the finishing touches on the drywall joints, straight ceiling cracks are not usually dangerous. The joints don’t bear any load, and there’s little worry about an underlying issue like water damage.

In rare cases, a straight crack may form due to a more serious issue. Always treat any cracks wider than about 1/8 of an inch as potentially dangerous.

Can I fix a straight ceiling crack?

Repairing the joints between the drywall panels is a minimally difficult home repair task. All you really need is a ladder, joint tape, putty, and a putty knife. Apply the tape to the crack, spread the putty over it, and wait. 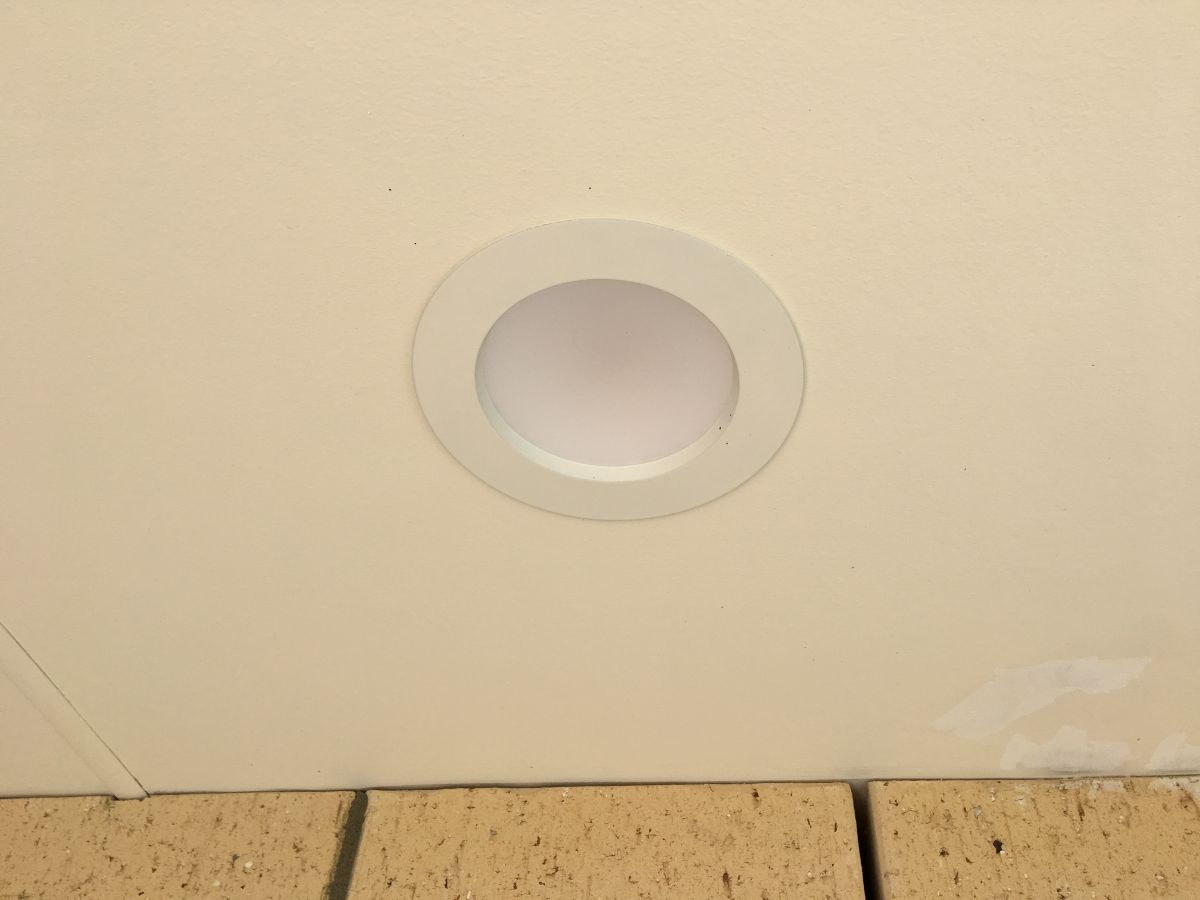 The joints between the ceiling and the wall may separate from one another, leaving an opening that could be called a crack. A phenomenon known as truss uplift is a frequent cause of these gaps as the ceiling bows up and comes back down with the weather. In other cases, the gaps form due to the house shifting as the foundation settles.

Is a crack between the wall and ceiling dangerous?

Can I fix a crack between the wall and the ceiling?

Repairing a crack between the wall and ceiling in a small section is similar to replacing drywall anywhere else, except the perpendicular joint adds an extra layer of complication.

Longer gaps between the wall and ceiling are usually the result of truss uplift or foundation problems. While either problem persists, fixing the gap would only be temporary.