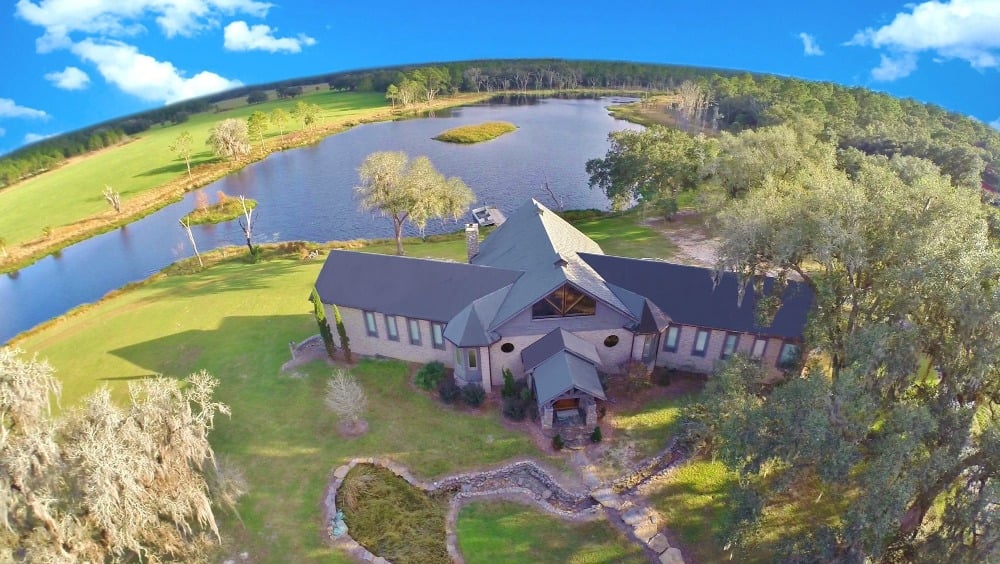 Avid pilot and businessman Will Radcliff of Slush Puppie Corp is selling his Umatilla, Florida ranch, priced at $3.9 million!

The Slush Puppie Fly’n R Ranch in Umatilla, Florida is now listed on the market for sale, priced at $3.9 million.

Owned by an avid pilot, Will Radcliff, the ranch includes a 19,990-square-foot airplane hangar-barn, a 3,200-foot grass runway a 7,750-square-foot lodge and several private lakes, stands of oaks and pasture. The lodge offers a massive stone fireplace and glass walls installed in the living space.

The Slush Puppie Fly’n R Ranch is a place for family or corporate retreat. For just $3.9 million, it could be yours!

Slush Puppie had already become quite successful in 1980 when Will Radcliff, an avid pilot, was visiting friends in Florida and came upon some land in Umatilla, Florida that piqued his interest. He bought 3,594 acres of pasture and wetlands and named it Fly’n R Ranch, flying often between his new ranchland and his Ohio home. The first improvement he made was a 19,990-square-foot barn and workshop with sawmill so the lumber for the house he would build could be cut and milled on-site.

In 2000 when he sold the ice business for $16.6 million, Will started on his next project: restoring the previously drained Fly’n R Ranch pastures back to their original wetlands. Highly conservation-minded, Will did most of the work himself bringing back the wildlife habitats and increasing their numbers.

Before his death in 2014, Radcliff made arrangements to leave 3,106 acres to the St. Johns River Water Management District, the negotiation of which took years to complete. His heirs would inherit the ranch that would retain 500 acres with an easement to prevent its later development and the remainder would be turned into a Florida state-owned water and wildlife sanctuary.

Now for sale, the ranch includes a 7,750-square-foot lodge constructed in 2012, 19,990-square-foot airplane hangar-barn, 3,200-foot grass runway, several private lakes, stands of oaks and pasture. The lodge is built with custom-milled timbers and beams, constructed using mortise and tenon joints fastened with wood pegs. The massive stone fireplace reaches the vaulted ceiling giving a warm focal point after the sun goes down; by day the view of nature through the glass living room wall.

A retreat for a large family get-together, a corporate retreat or private sportsman’s club, Will Radcliff’s dream and dedication to conserving original Florida land can now be enjoyed by the ranch’s next owner. Priced at $3.9 million.