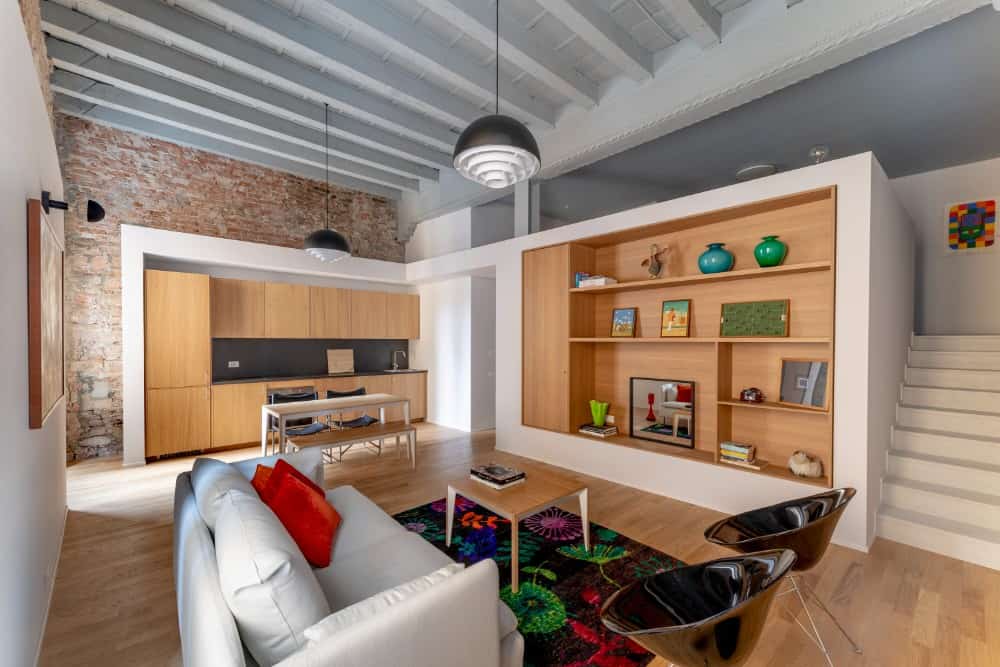 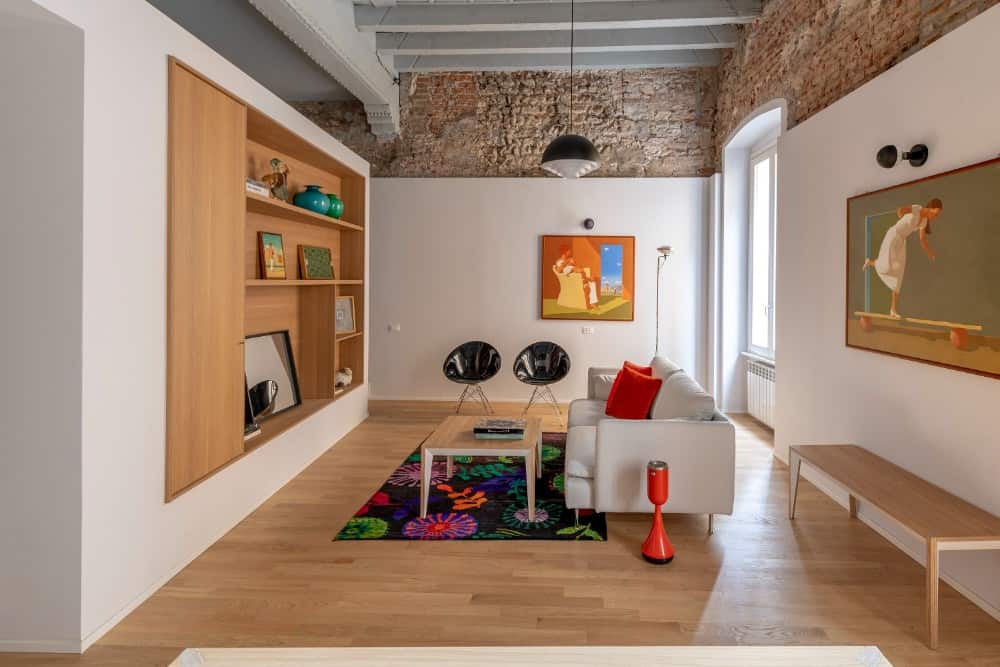 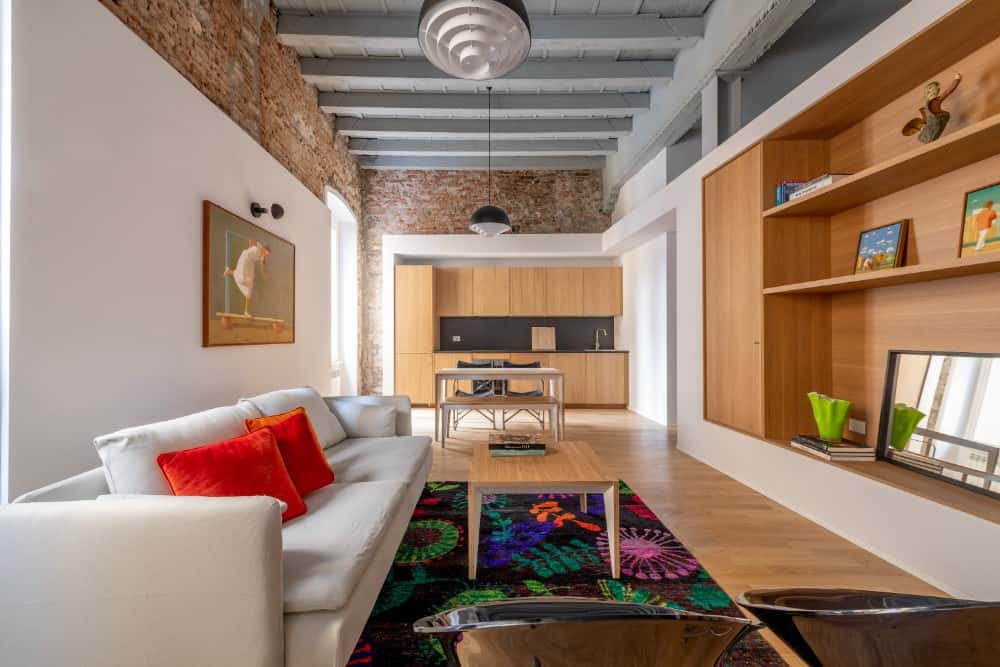 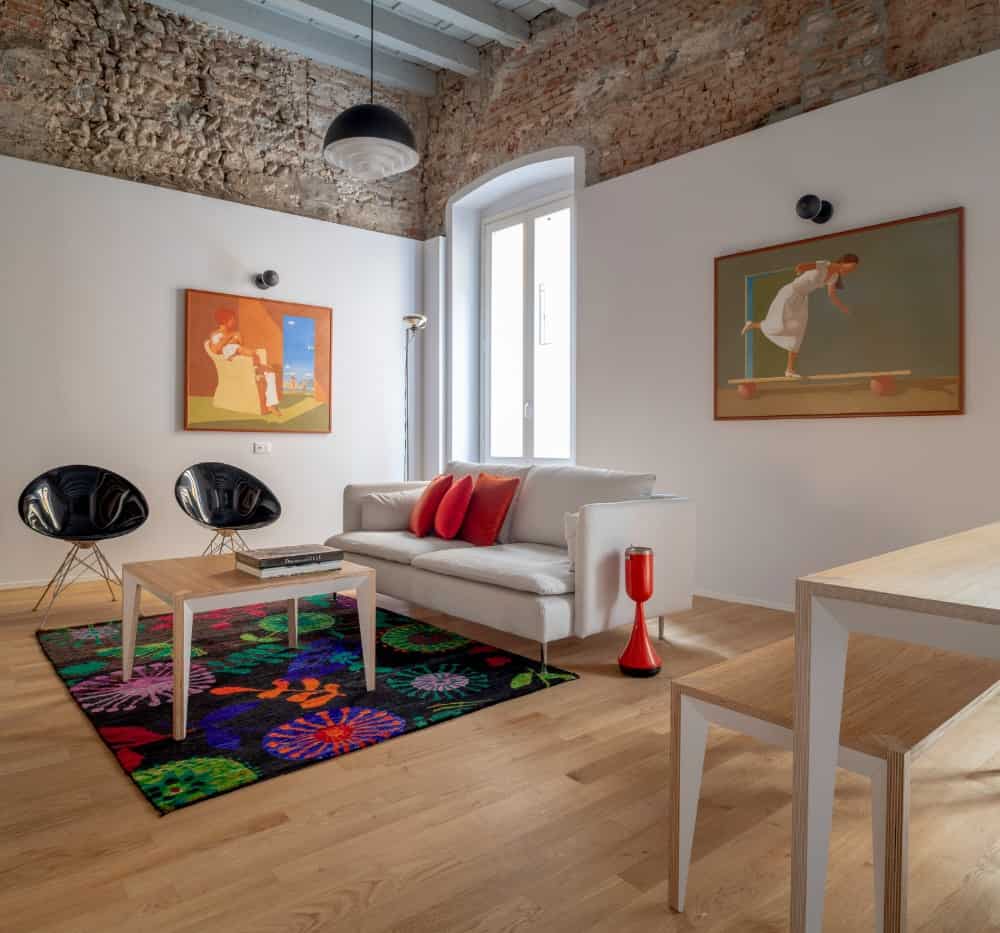 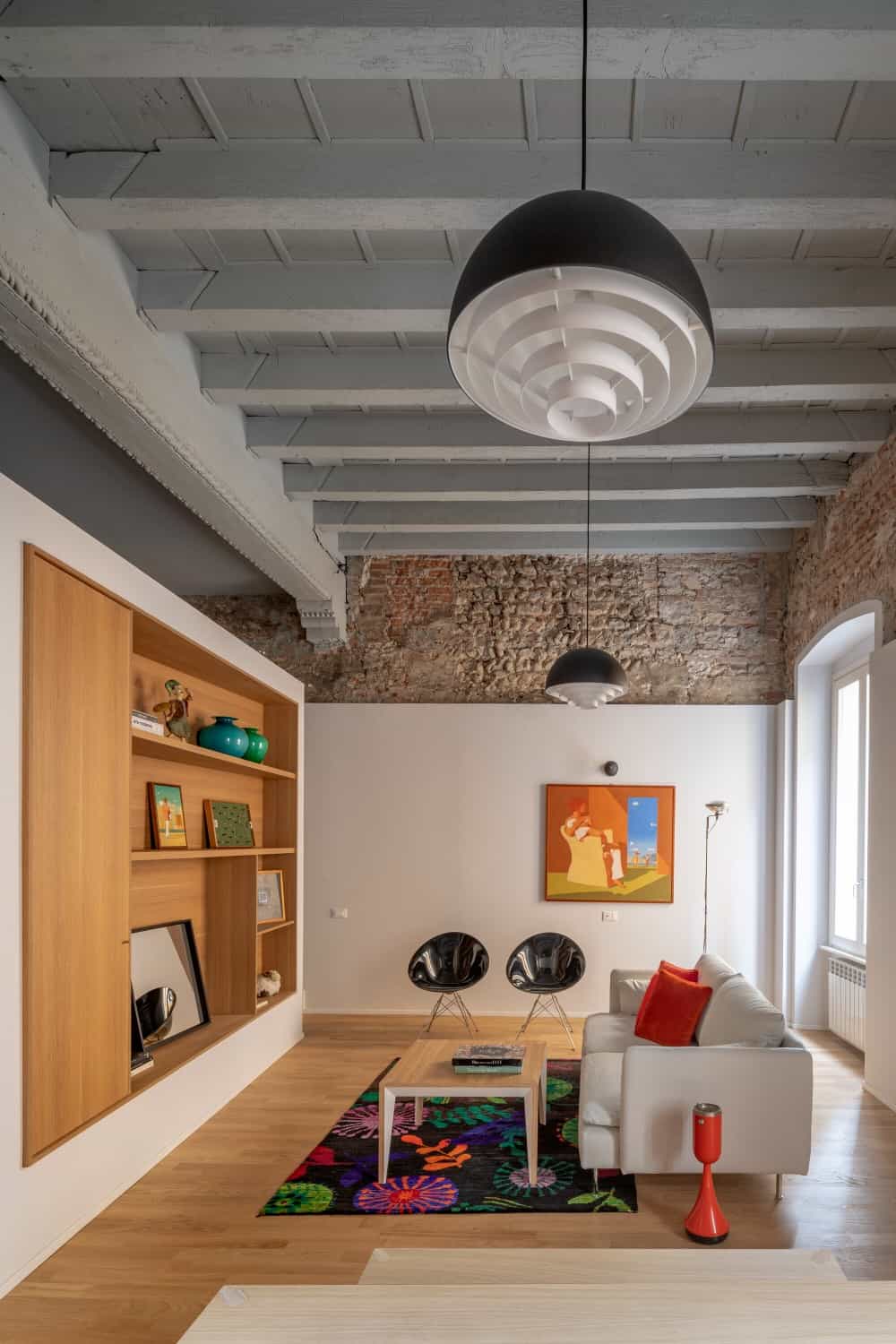 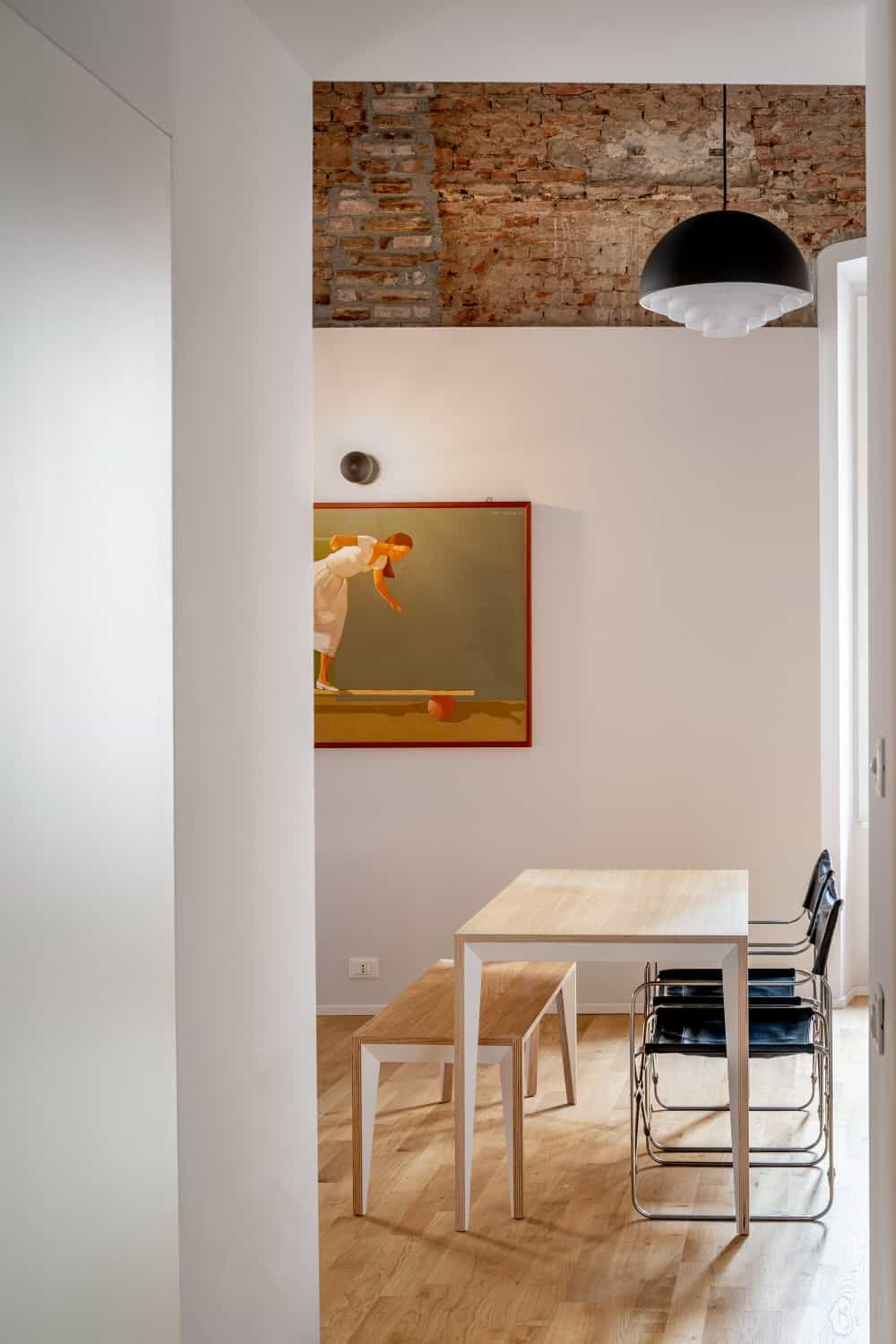 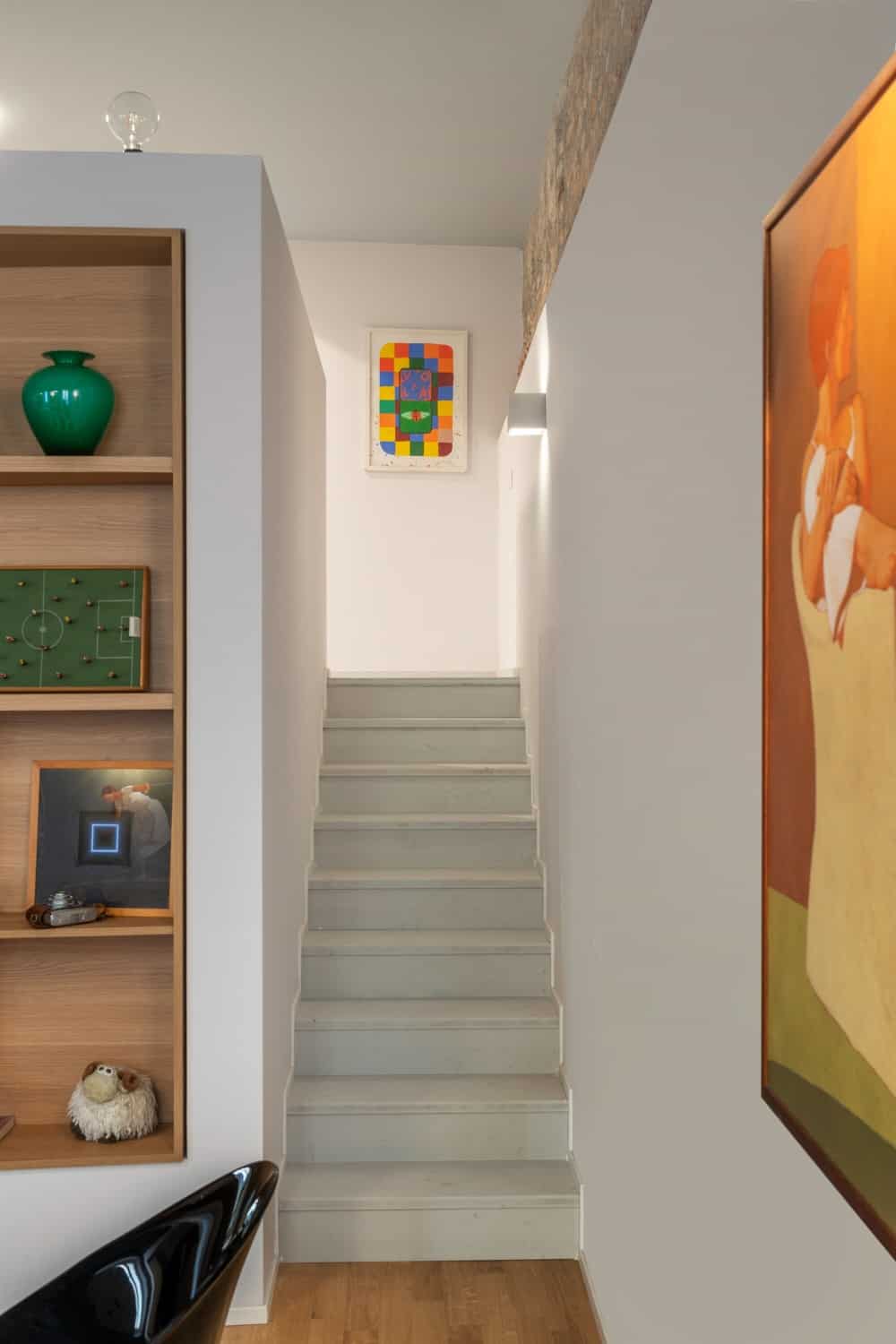 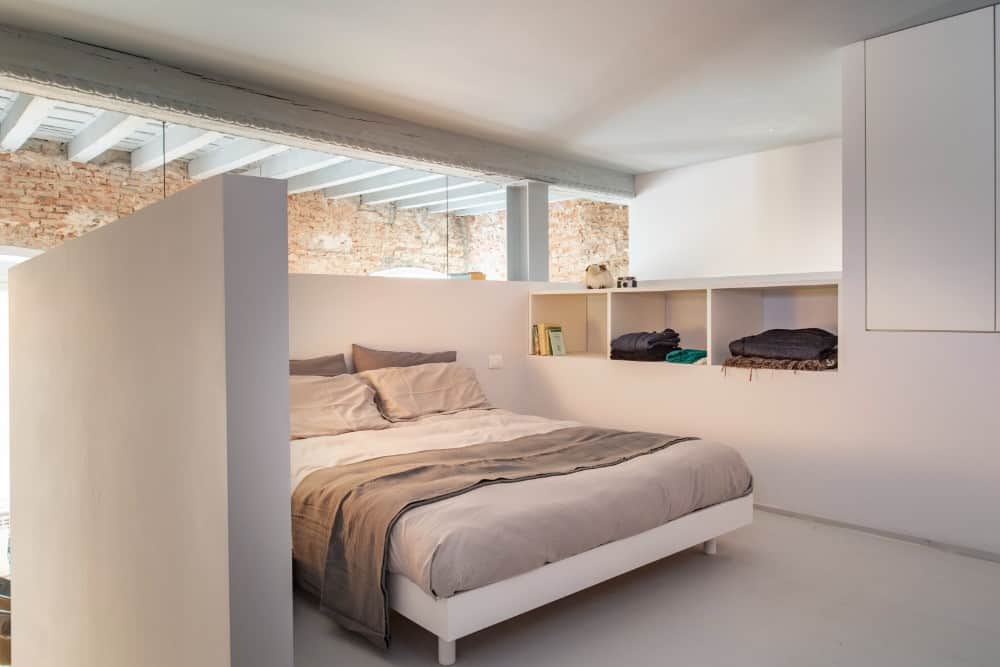 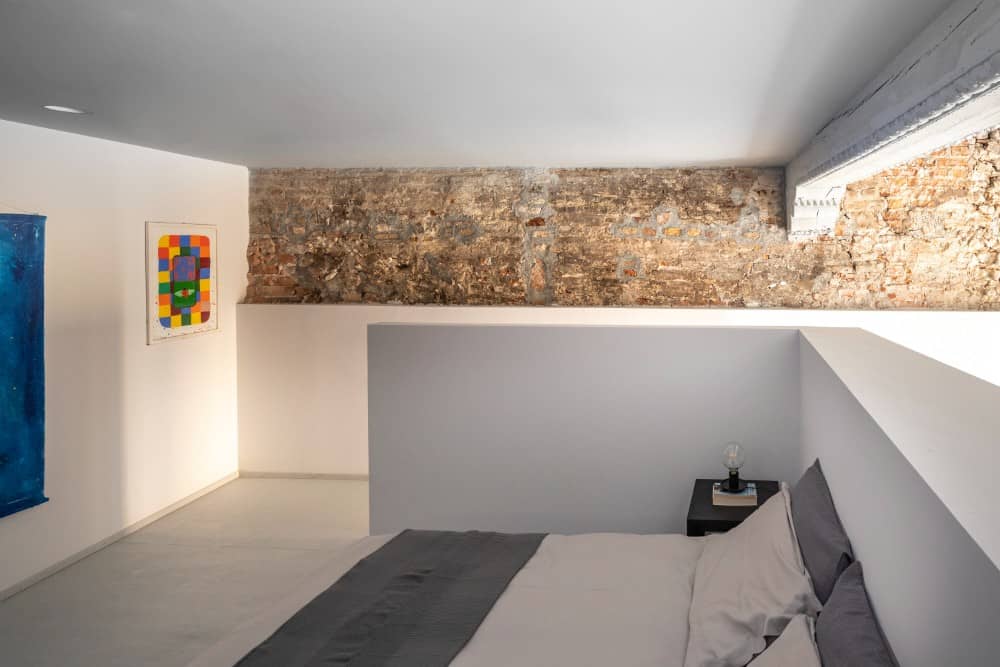 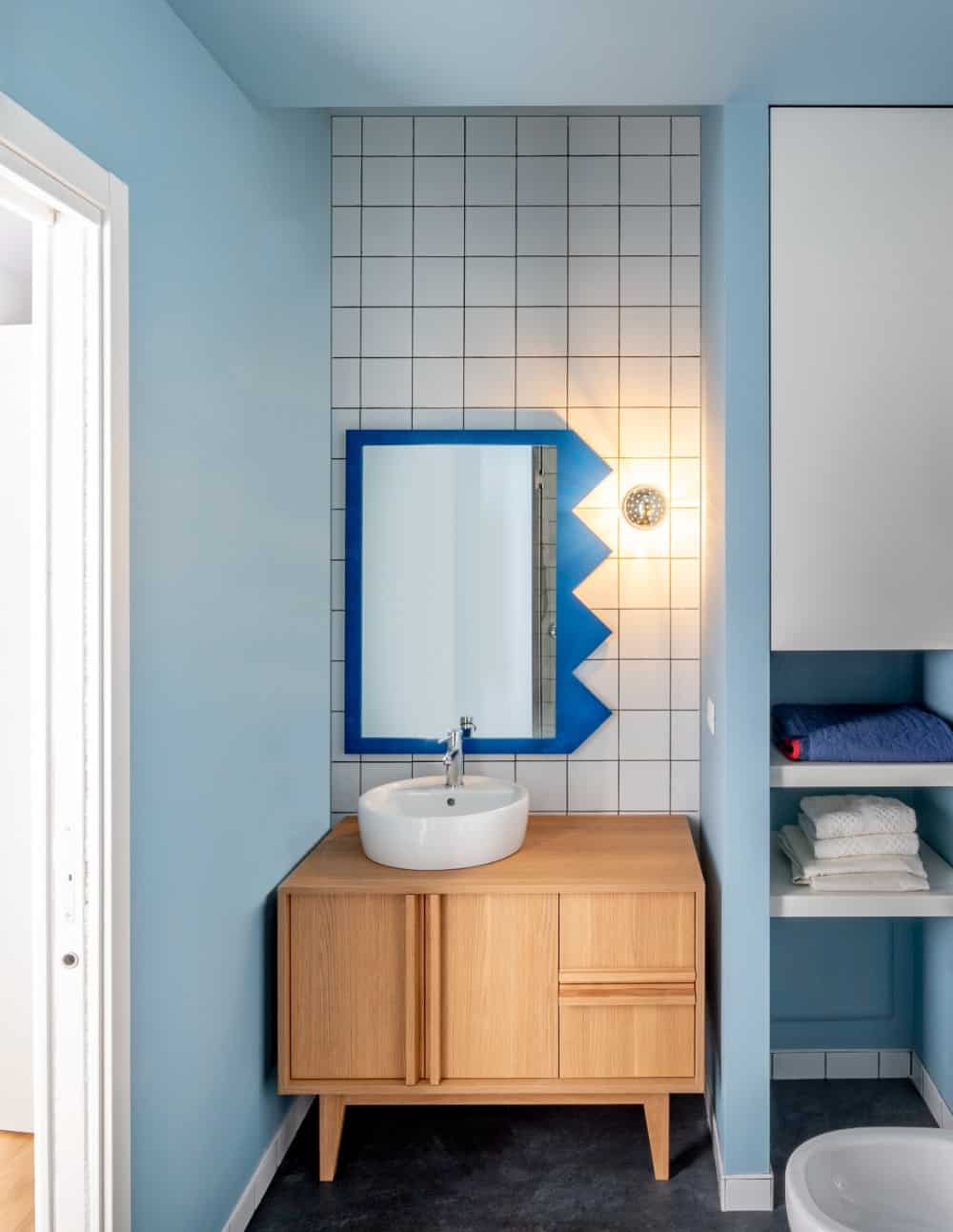 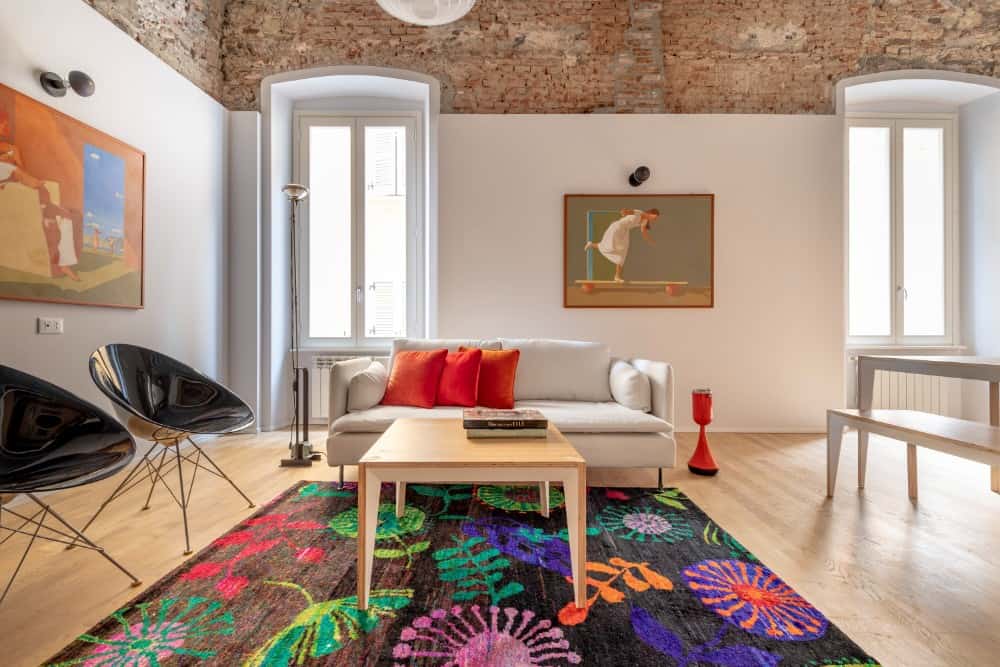 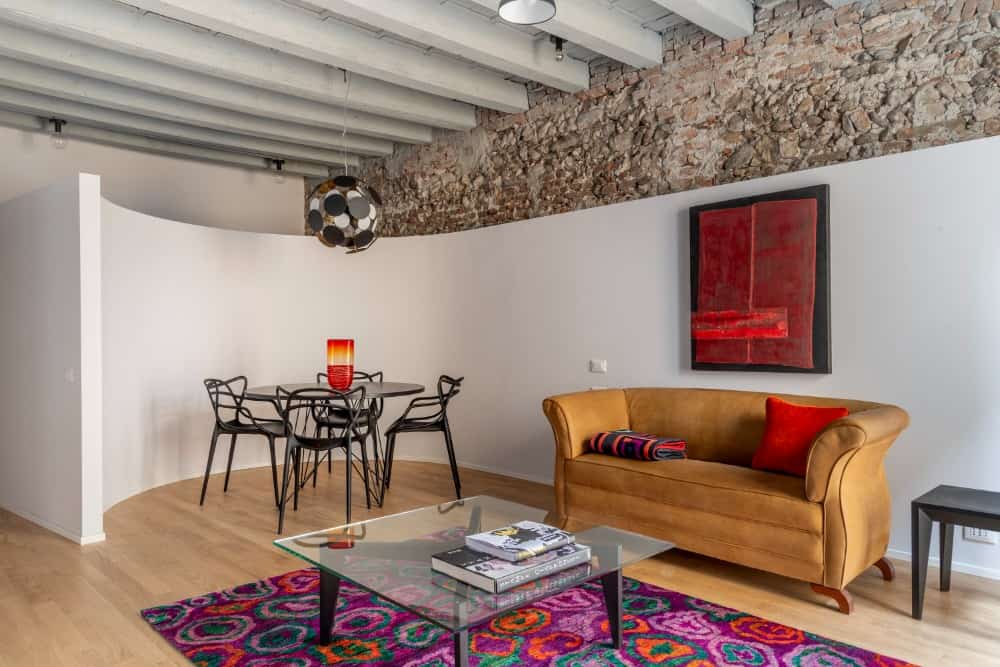 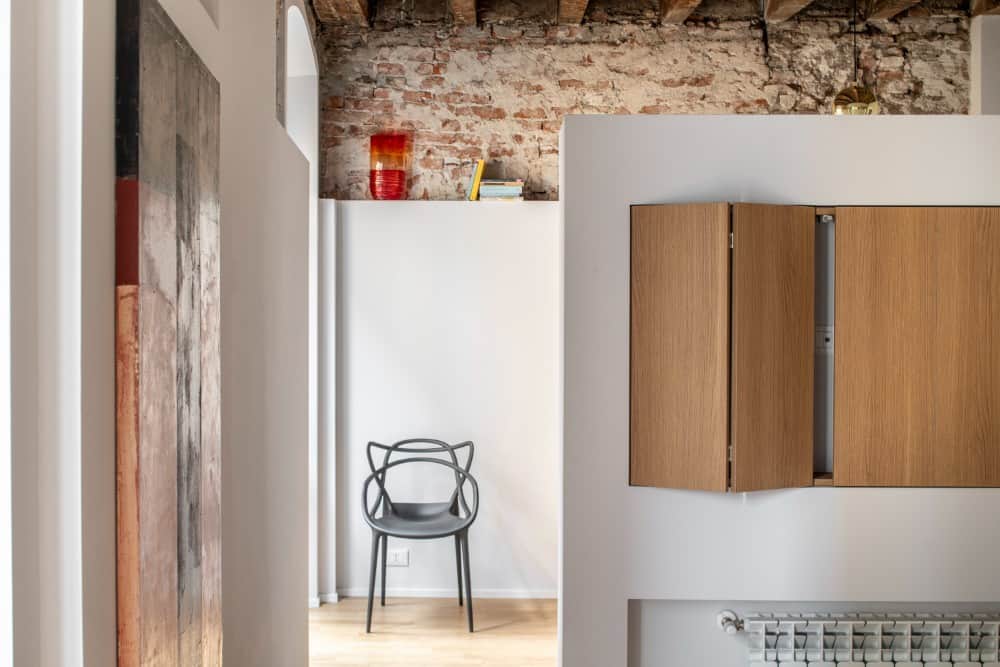 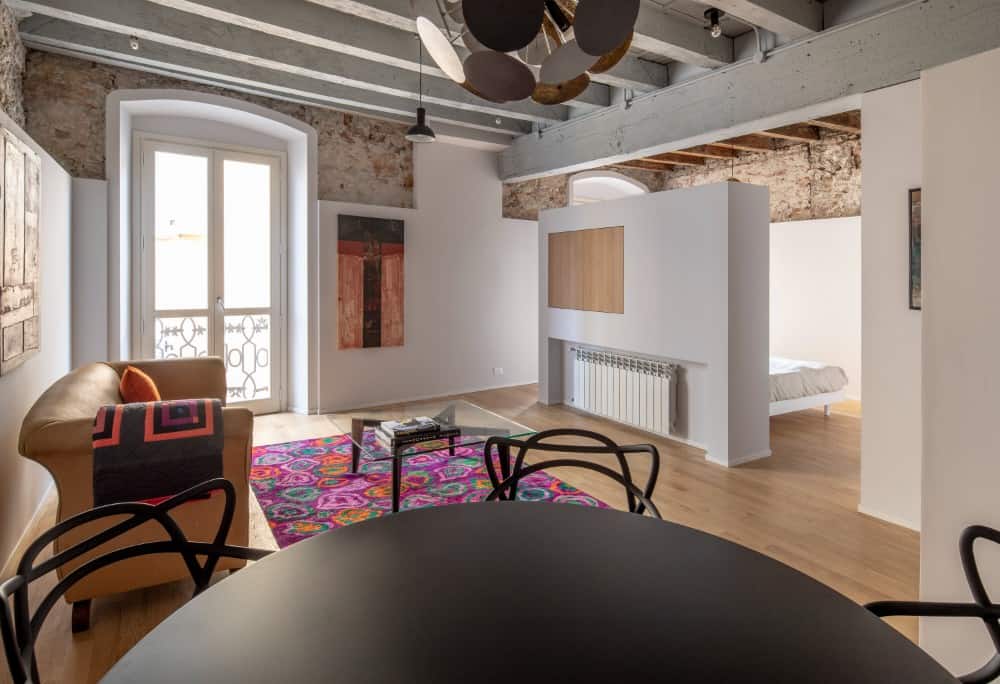 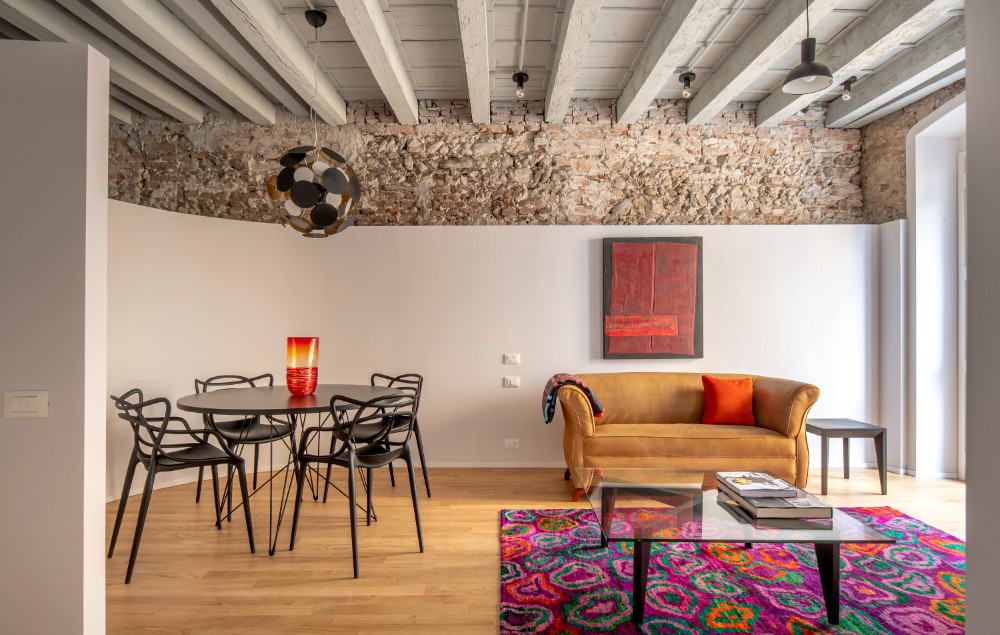 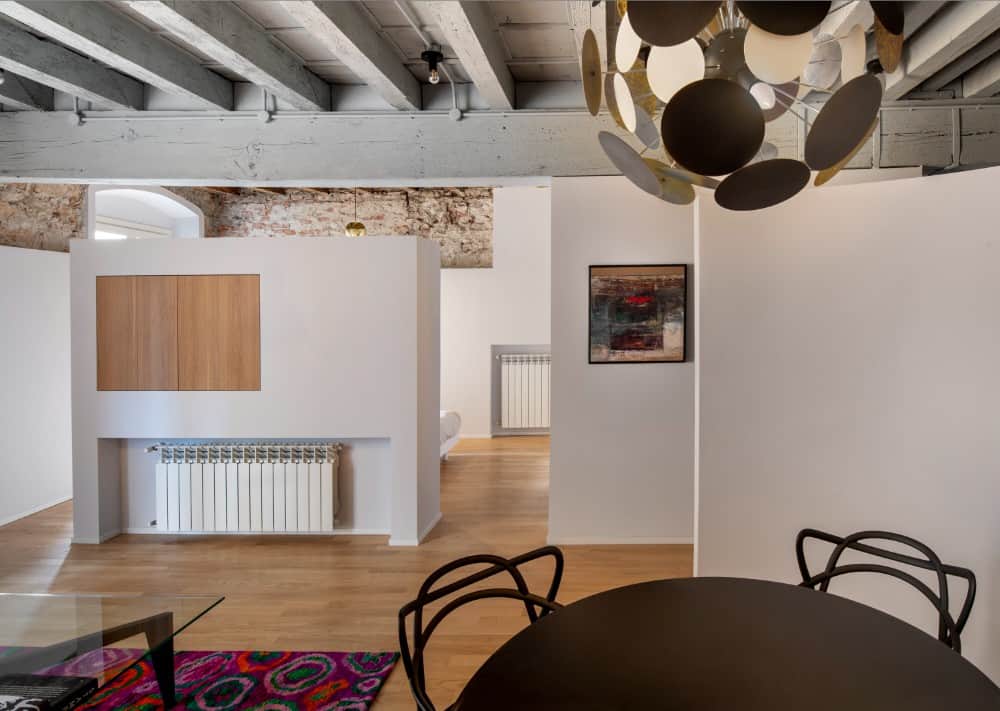 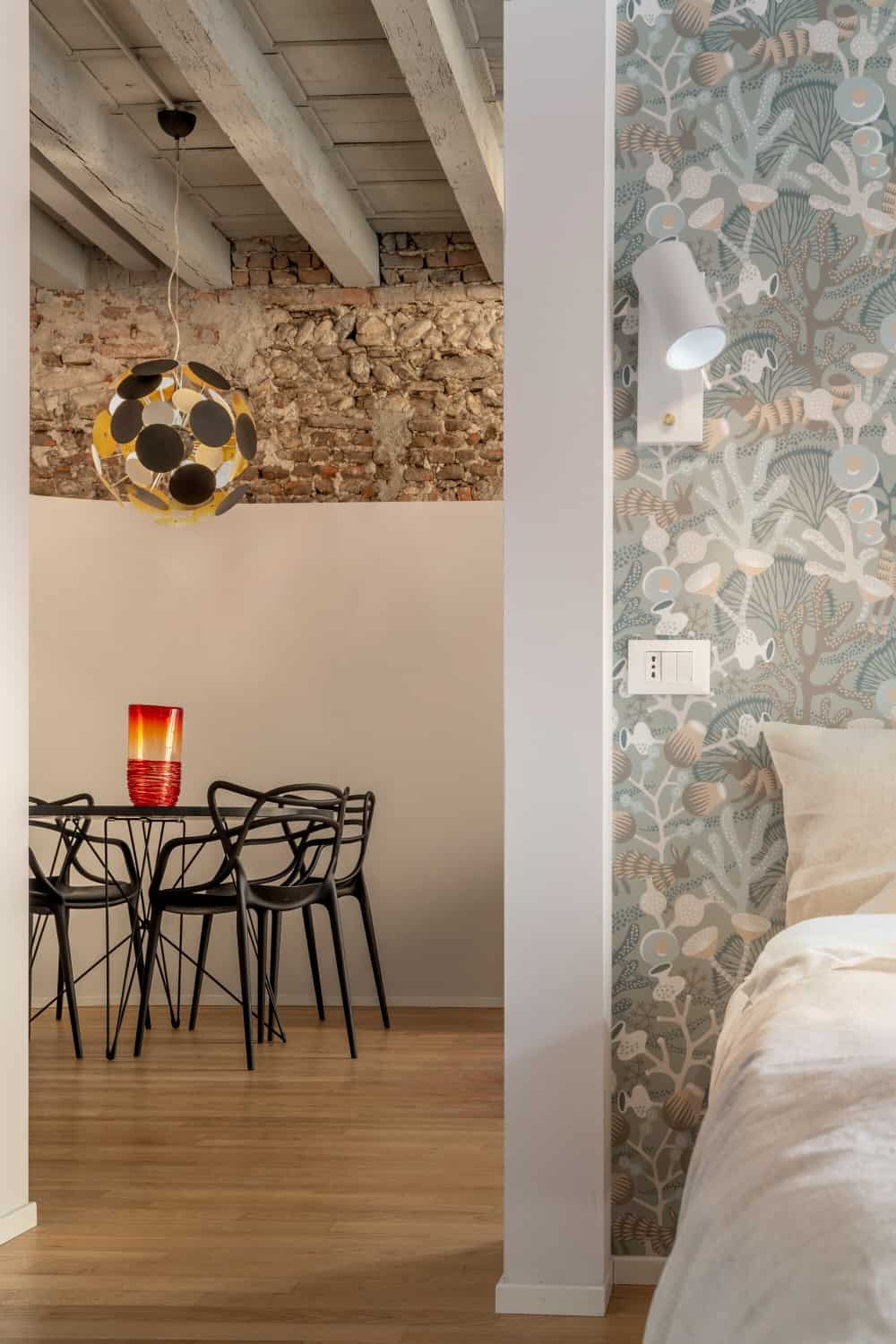 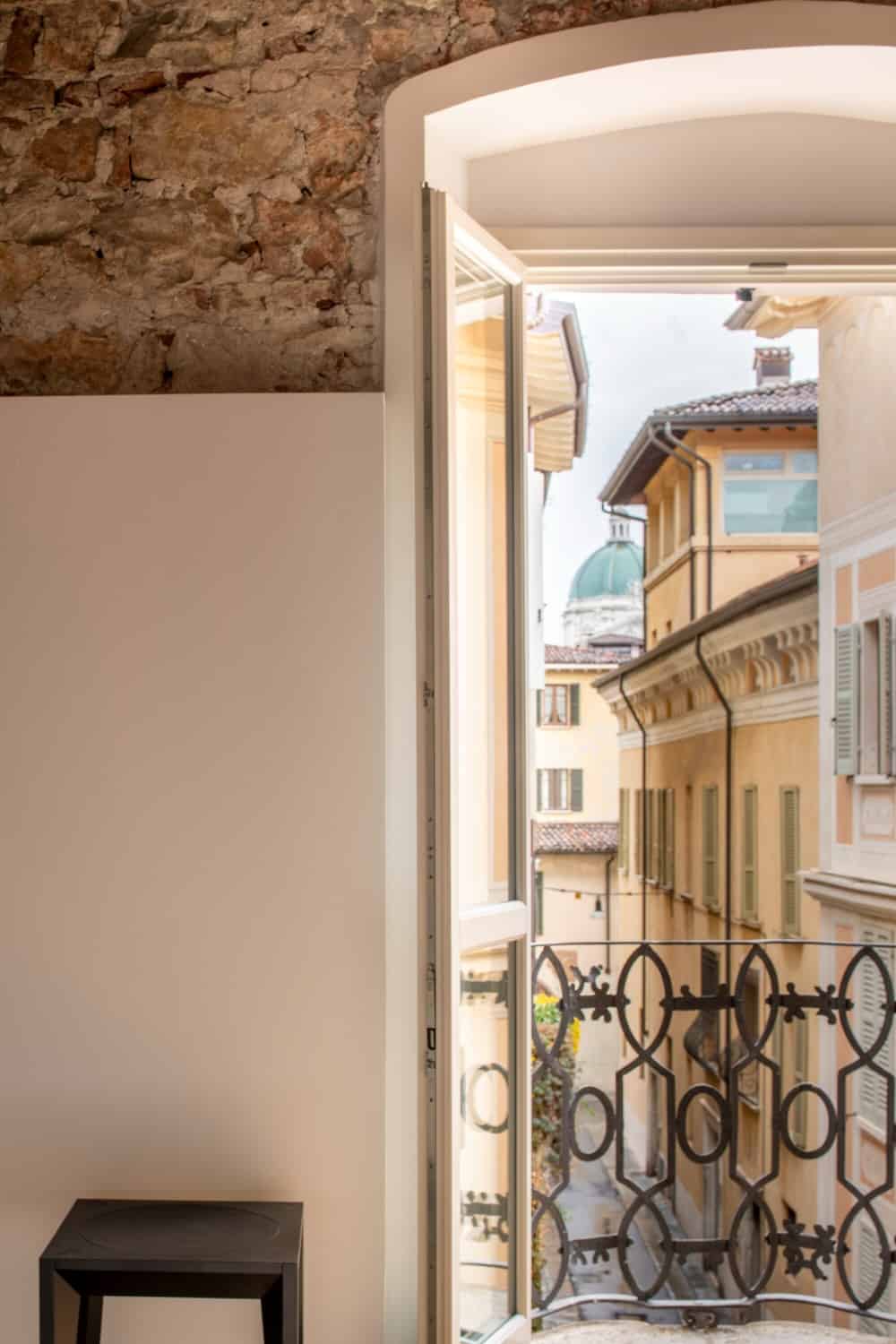 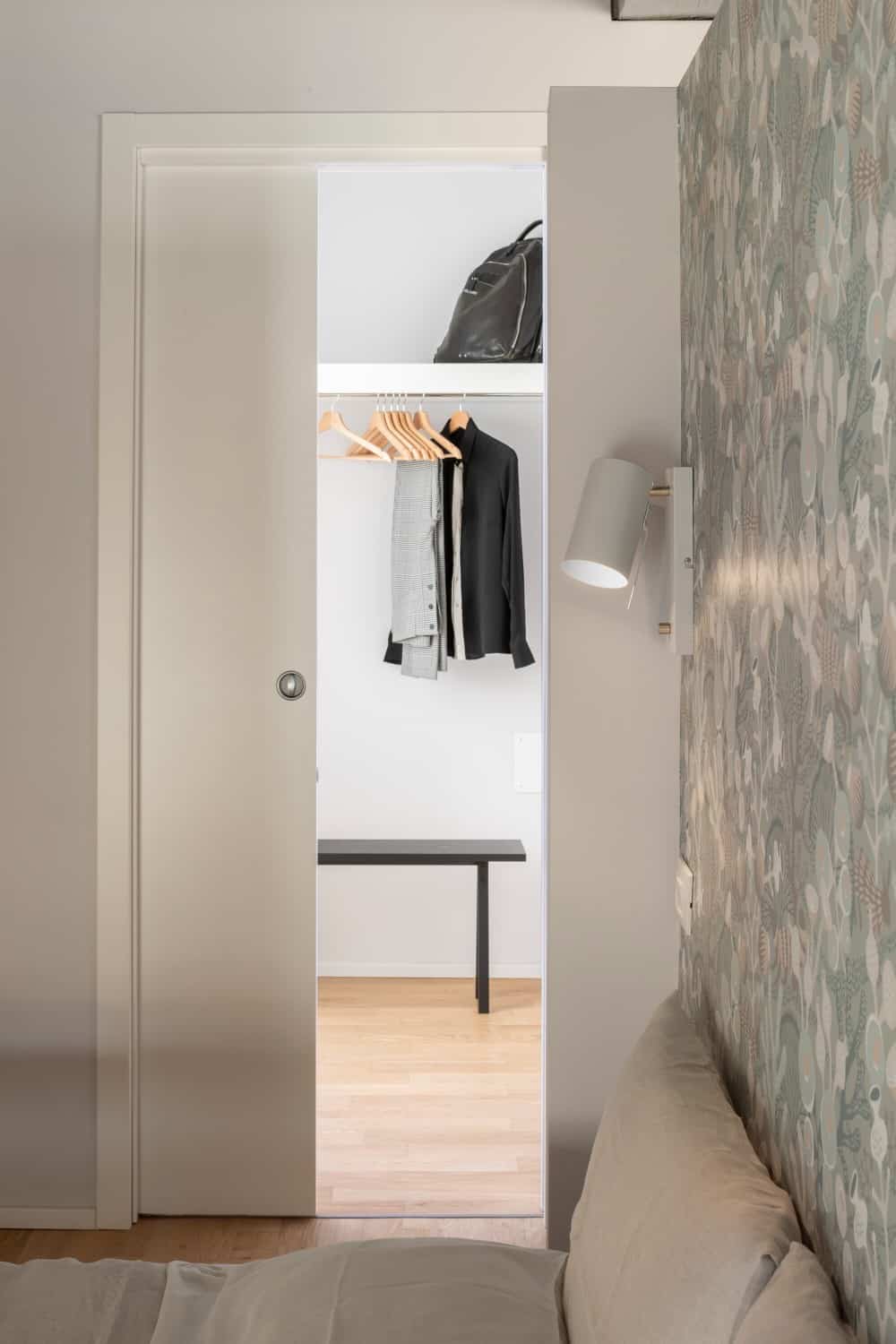 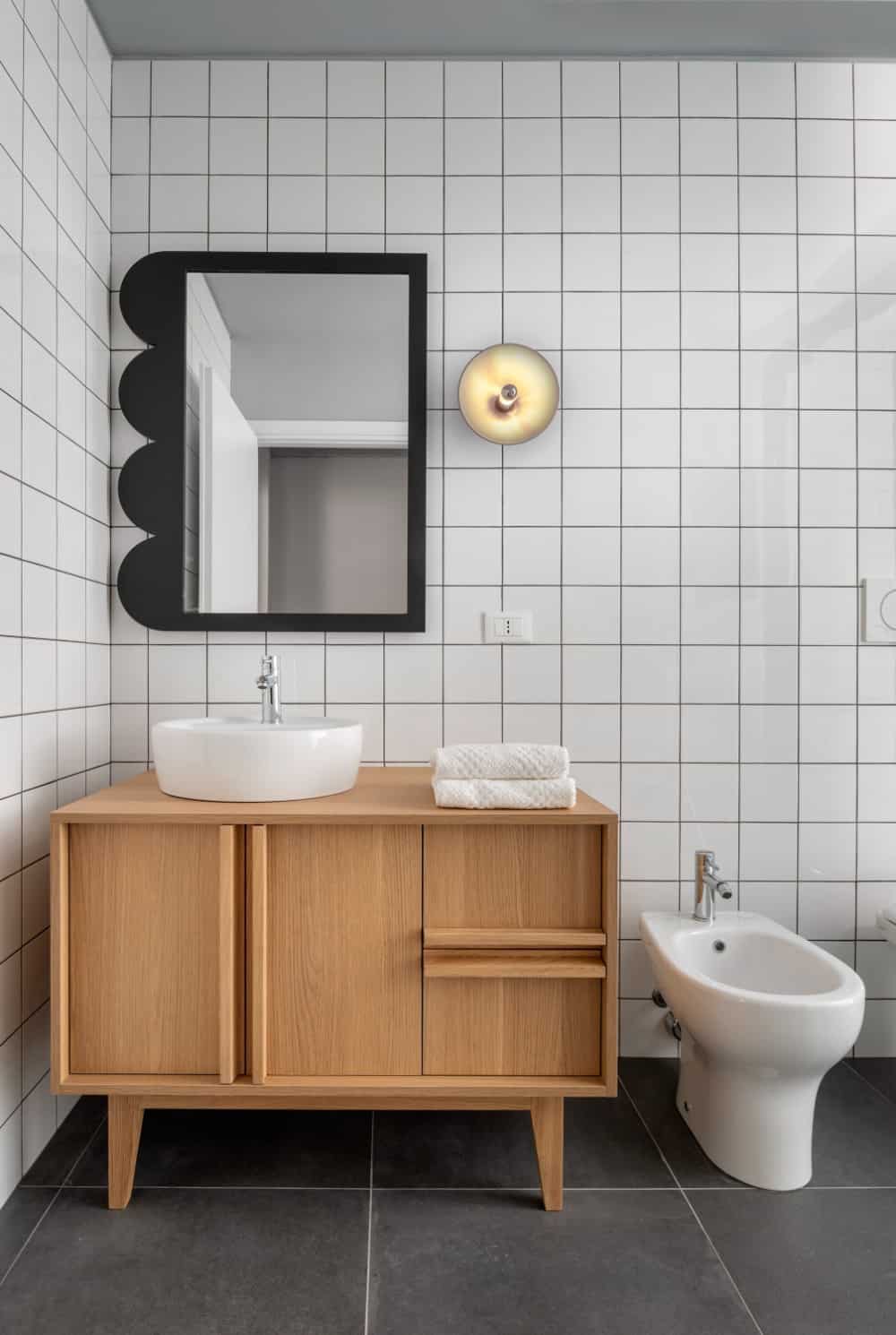 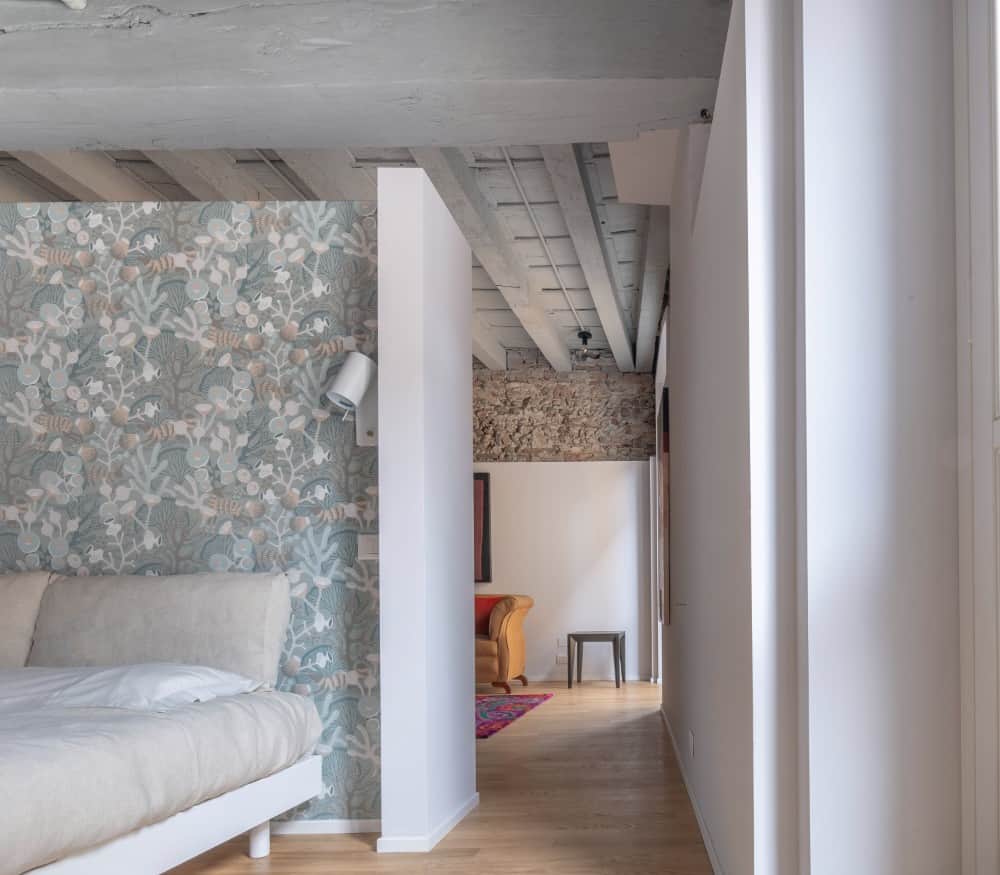 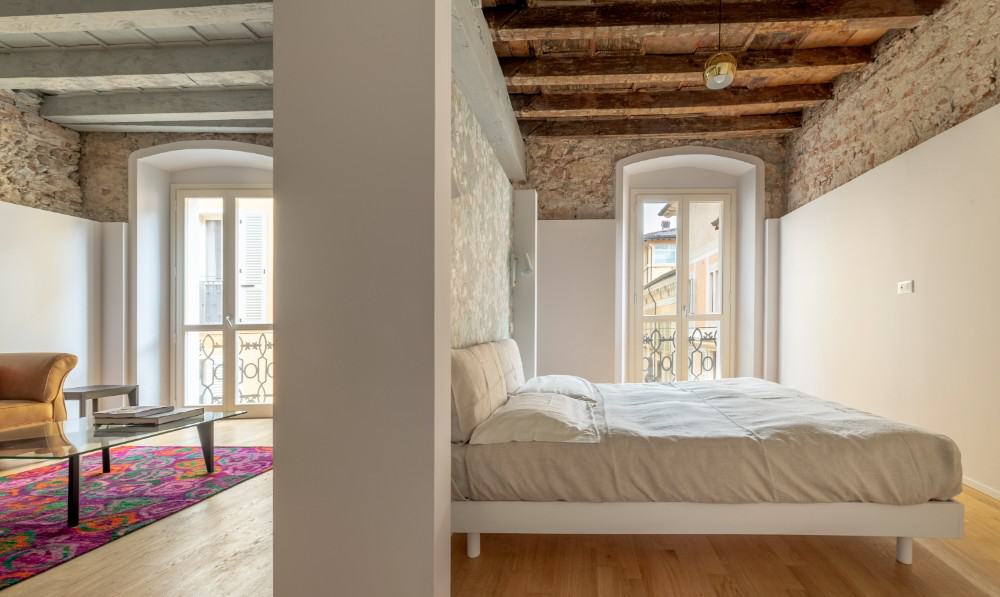 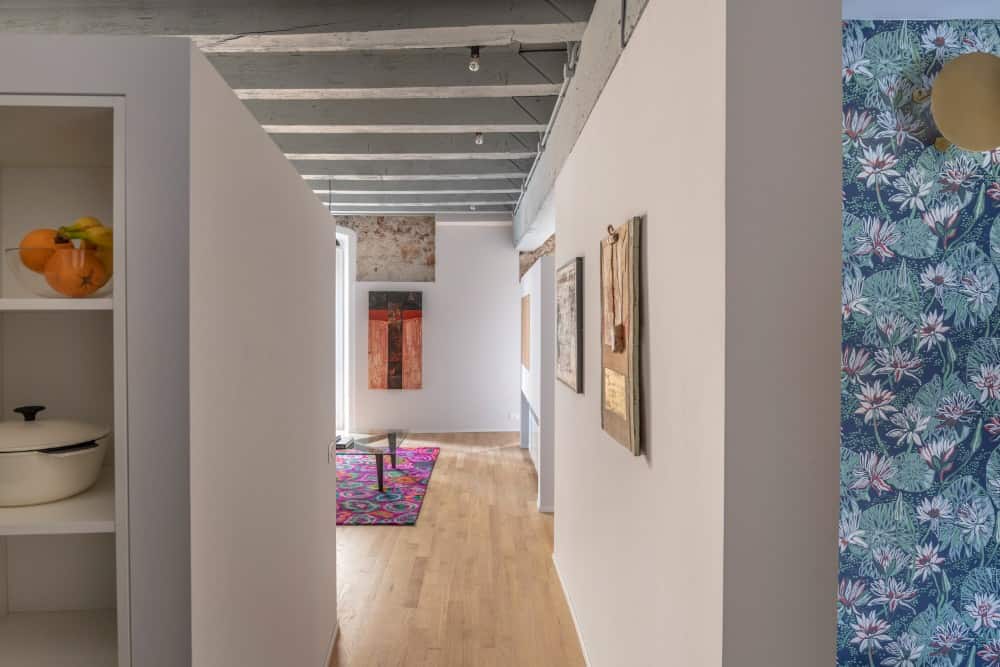 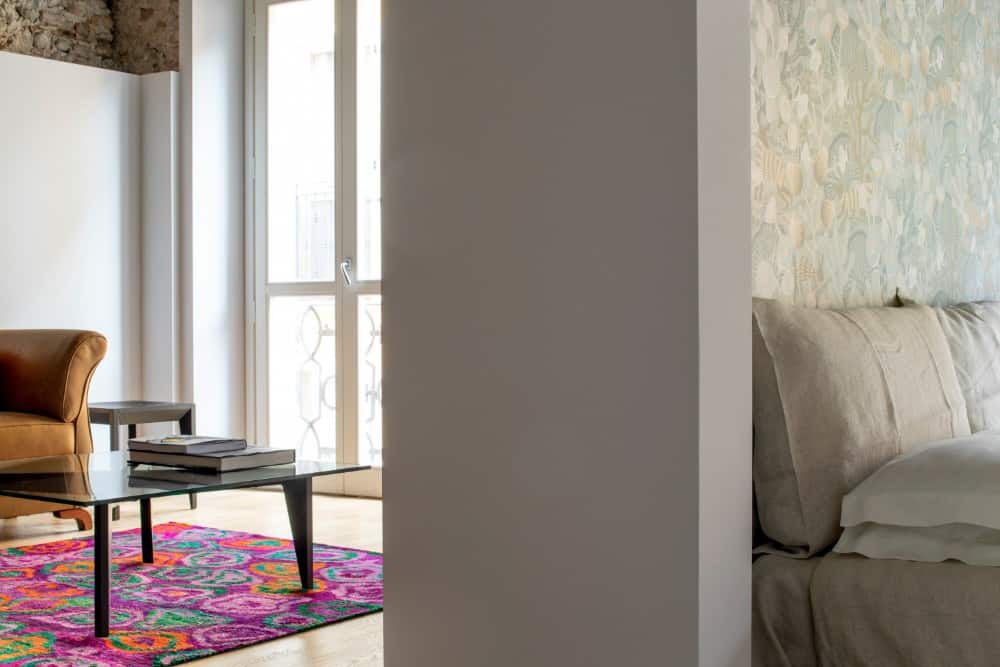 This gut renovation opens up and modernizes the interiors of two apartments in a dilapidated historic Palazzo in Brescia, Italy, while restoring the original grandeur of the spaces. Interestingly, the units are positioned on subsequent floors, sharing, as it were, the same perimeter outline. By virtue of their different ceiling heights, however, they engender discrete architectural responses.

On the second floor, the Piano Nobile Loft expands vertically, taking advantage of the 4.4-meter high ceiling. The Round Wall Studio, on the third floor, develops horizontally with a series of partial-height partitions.

Both apartments were in a state of complete disrepair and were subdivided into multiple small rooms, many with no access to daylight. Several of the most exciting features of the original architecture, such as the decorated primary beams and the coffered wood ceiling, were concealed by plaster-dropped ceilings and revealed themselves in the demolition phase.

Structurally, the apartments were unsound–the central wood beams spanning the Piano Nobile Loft’s width and the Round Wall Studio’s length were both sagging. In addition, several secondary beams had been haphazardly cut to make space for chimney flues and were unsupported. The installation of steel columns, brackets, and reinforced screed at floors addressed these issues.

For light and air, each unit could only rely on two large windows facing the street, and none of the utilities were up to code.

The architecture strategy brought back the sense of the scale of the original rooms while at the same time ensuring a well-defined and efficient allocation of residential programs. Wall “objects” within the space–whose contemporary formal language creates a counterpoint to the existing texture of the historic fabric–ensure such programs’ separation. These elements live at a scale between interior architecture and furniture.

To allow light to travel as deep as possible into the room, these “objects” are partial height. A thickened perimeter sheetrock wall aligning with the datum established by the partial-height partitions addresses the unevenness of the existing walls. Additionally, it creates a cavity for services (electric/plumbing) and a shelf for display.

At the Piano Nobile Loft, the intervention left the majority of the ceiling plane uninterrupted, recreating the expansive scale of the original space, which was initially the Palazzo’s main living room. Formally, the bathroom and mezzanine volumes are expressed as inserted and interlocking objects within this historic fabric. The mezzanine volume solves two purposes.

Firstly, it acts as a storage “superwall” containing various storage niches with closets, shelving, etc. Secondly, it houses an elevated bedroom that is accessed through a stair and overlooks the living space. Here, the sheetrock thickened solid railing doubles as a headboard and night table.

At the Round Wall Studio, partial height partitions–one round, one rectangular–and an L-shaped volume housing the bathroom/walk-in closet separate space and imply rooms without fully subdividing. The round partition creates a cozy dining room with a round table on one side and separates the kitchen. The rectangular partition separating the living room and bedroom doubles as a headboard on one side and as a TV/radiator niche on the opposite side.

The furnishing is sparse yet curated. The Loft’s oak and white furniture pairs with the custom oak millwork and kitchen, while ebonized black at the Studio provides contrast. Many of the furniture pieces in the images are designed by alepreda for miduny furniture (the studio’s sister company).

Miduny’s furniture combines timeless form with warm materials and whimsical accents. Made in Verona by master artisans, these pieces express a tension between the softness of hand-craftsmanship and the minimalist form–this tension resonates with the play between old-new at the architectural scale.