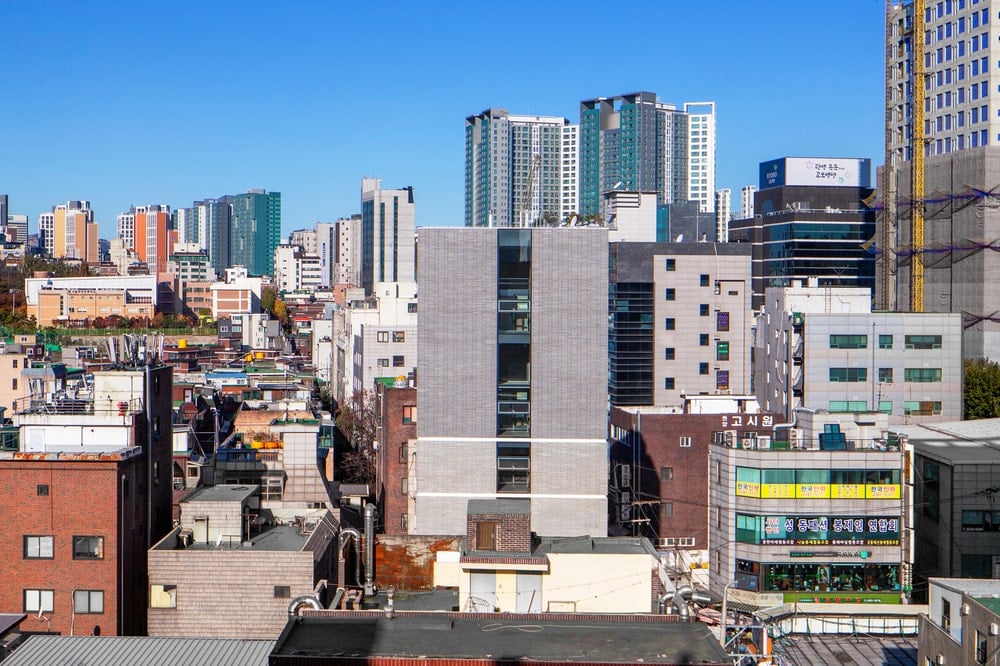 ”Two worlds of different gravities under the same sky”

The movie <Patema Inverted> is set in a world where opposing gravities exist sharing one sky and is a story about recognizing disparities through each other and achieving harmony. The studio apartment ‘Patema Inverted’, located at the entrance of Haengdang market, talks about how conflicting things that seem rather heterogeneous for an efficient apartment to be built can coexist.

First, the disparate level difference between the three types of building groups that form the district raised an issue. There are countless one- or two-story stores that form the market. Behind them four- to five-story office buildings are sparsely located, and high-rise buildings are widely spread out. ‘Patema Inverted’ utilized red bricks and transparent glass as exterior materials of the first and second floors, and a cafe that is open towards the market intersection was placed.

The lower floors were made into white volumes of similar levels to the neighborhood living facility buildings nearby, and the residential area on top was finished with two tones of gray cement bricks. The volume of red bricks on the ground floors naturally blends in and dissolves with the complicated market buildings in the surrounding, the relatively bright-colored middle floors are emphasized, and as the two tones of gray seem to retreat upwards for the upper floors, the heterogeneity caused by the level difference in the region is diluted and embraced.

The problem that came afterward was the inherent heterogeneity of efficient apartments in terms of functions and life patterns. The boundary between the multiple people of the market and the residents of the efficiency apartment is broken and formed again in the wide-open cafe on the first and second floors.

The upper floors were planned as housings for one- to two-person households, which are mostly university students, graduates, and newlyweds, in an attempt to bring young generations into the stagnant market. The smaller the area is, the more things there are to carefully consider in the design process. The privacy issues have to be suitably mediated while solving the lighting problem, and studies on anthropometric measurements as well as new ideas for space utilization are also required in order to avoid any areas being wasted.

We used a method of securing personal areas while bringing sunlight into the interior as evenly as possible by placing uneven windows in the interior. We hope that the external situations in the city center are attracted into the internal architectural environment and that the internal programs are sometimes naturally projected and displayed to the exterior to appear as the building’s envelope, allowing the interior and exterior to flexibly react to each other so that it becomes an architectural form that grows and evolves by itself.