This Pebble Beach Mansion inside of one of the most beautiful golf courses in the world is now available on the market, priced at $34.9 million!

The Pebble Beach Mansion inside of one of the prettiest golf courses in the world is now for sale on the market priced at $34.9 million.

The golf course was originally designed by Jack Neville and Douglas Grant and opened on February 22, 1919. The property also offers several spectacular mansions and other buildings, one of these buildings is the Pebble Beach mansion, which is set on the ocean cliffs near the golf course lodge with views of the course and the white-sand beaches of Carmel and Point Lobos State Park and is one of the most dramatic homes in the area. The 8,413-square-foot home boasts a three-car garage and a separate guest house.

The main house has a large great room, a chef’s kitchen and a wine cellar that can hold up to 1,000 bottles. Outside, the custom infinity swimming pool awaits including the outdoor kitchen and dining.

Now available on the market, the Pebble Beach mansion is priced at $34.9 million and the listing agents are Mauricio Umansky and Cicily Sterling of The Agency, Beverly Hills.

Selected as the No. 1 Golf Course in America by Golf Digest in 2001, the Pebble Beach course wraps around the coastline of Carmel Bay with staggering views of large waves crashing along the rocks on the south side of the Monterey Peninsula. The golf course was originally designed by Jack Neville and Douglas Grant and opened on February 22, 1919.

Though several architects have made revisions over the years, Jack Nicklaus was the last when he recreated the 5th hole in 1998. Formerly known as the Bing Crosby National Pro-Am tournament when it began in 1947, every February the last of four rounds of AT&T is played at the Links course. Pebble Beach has hosted the U.S. Open five times, the last in 2010, and will be held at the Links again this year in honor of its centennial. With its dramatic setting, it’s not surprising that the greens fees are some of the world’s highest with off-season rounds at $425 per round, increasing to $525 each April 1st. Plan on an extra $100 for a caddie.

In addition to its beauty and history, Pebble Beach is unique for one of the West Coast’s favorite Sunday car trips on 17-Mile Drive with views of the golf course, seascape, and spectacular mansions. One of the most dramatic homes, set on the ocean cliffs near the golf course lodge with views of the course and the white-sand beaches of Carmel and Point Lobos State Park, is currently for sale, priced at $34.9 million.

As one of only 31 waterfront properties, the home is on the only two-acre lot and gently curves around the cliffs of Pescadero Point. Gated and private, it is nestled among cypress trees down a cobblestone drive through lush landscaping and cascading pools. The grounds contain the 8,413-square-foot home, a three-car garage, and a separate guest house.

The main house features multiple venues for entertaining with a large great room with vaulted ceilings, formal and informal living and dining areas, a chef’s eat-in kitchen with large island and walk-in pantry, a wine cellar for up to 1,000 bottles and multiple terraces, one with outdoor kitchen and infinity swimming pool. With a total of five bedrooms and seven baths, four-bedroom suites open to ocean-view terraces including the primary suite that includes a sitting room, glamorous marble bath, and enviable closets.

This Pebble Beach mansion that is befitting a champion golfer or anyone who expects the best and a fan of heart-stopping views, is now available for sale, priced at $34.9 million. Listing agents are Mauricio Umansky and Cicily Sterling of The Agency, Beverly Hills. 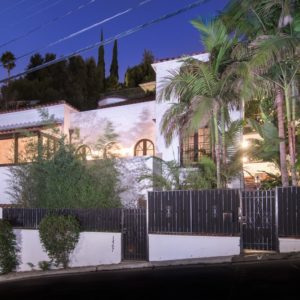 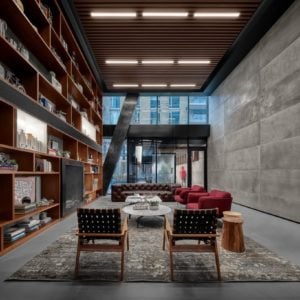