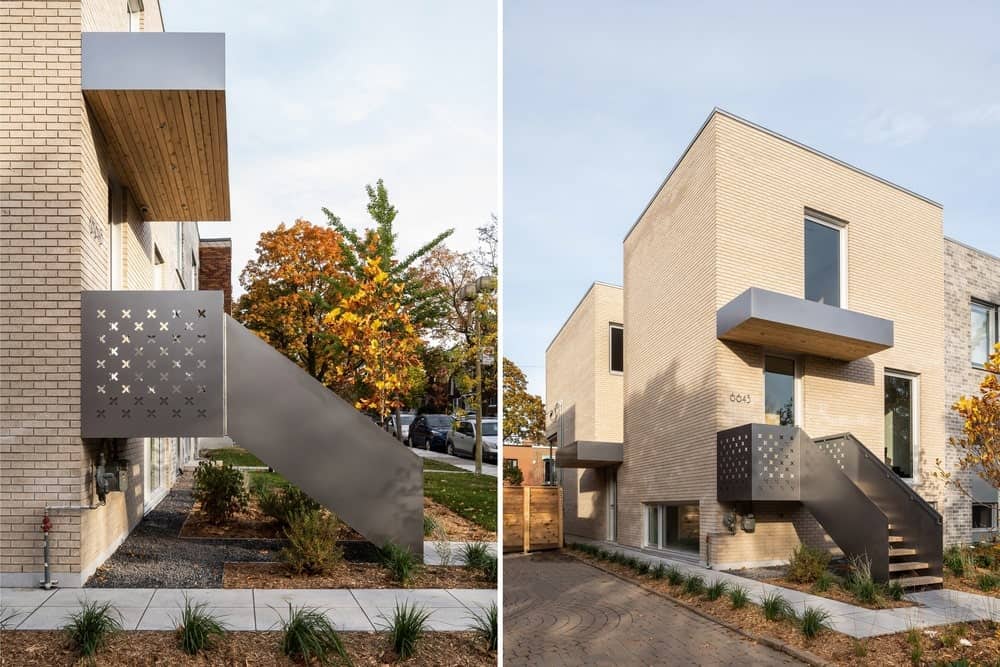 A new home for two families brings new life to a quiet Montréal neighborhood dating back to the ’50s and ’60s. In its own, unassuming way, this recent building is part of a movement that is gradually transforming Montréal’s traditional streets, as a growing number of young families are moving in. They are looking for friendly surroundings, but also for a contemporary way of life.

Named La DUETTE in reference to the duet, intended for two performers, this new house was designed for a brother and a sister wanting to live under the same roof with their respective families. One of them occupies the upper two floors while the other one is on the lowest level. The challenge of bringing natural light to both interiors despite strict zoning regulations was a welcome opportunity for Natalie Dionne Architecture.

La DUETTE literally evolved from 3D models, which allowed the architects to explore the potential of this narrow site without contravening existing regulations. The virtual model was extremely useful in shaping the project, but it also helped the designers discover unexpected views and exterior living spaces.

The upper unit of this new three-story duplex is accessible from the front façade, off the street. Access to the lower unit is from the side alley. A small marquee above each entrance signals their presence from the street and helps create a feeling of intimacy for both families.

Set slightly below ground, the lower unit is a two-bedroom apartment with a living area extending outside to a small private courtyard. Light floods in from the large openings at the back as well as from side windows.

At the front of the house, stairs lead up to the upper unit, which is raised above the street level. The ground floor is treated as an open-concept living space. The kitchen and the dining area are directly connected to a generous covered terrace overlooking the back alley. The primary bedroom, two children’s bedrooms, and a small play area are on the upper floor.

Two solutions for maximizing natural light were envisioned. The first was to “fold” the lateral façade inwards, creating a recess large enough to accommodate two sets of windows facing each other. A major source of natural light, these windows also provide unexpected views. The other solution was to incorporate a skylight intended to cover the stairwell so completely as to appear practically invisible.

Transparency is key to this project, particularly in the upper unit where light abounds and unexpected views pop up, out of the blue. The sculptural stairs, which float above the floor, create magical moments. Everyday gestures become poetry. A seamless glass partition separates the primary bedroom from the stairwell, reinforcing the effect of transparency. Long curtains insure intimacy.

Maple veneer is used throughout on huge doors and partitions meant to keep services out of sight. The warm presence of wood makes up for the cooler feeling of materials such as the floors’ polished concrete and the windows’ aluminum frames.

The black staircase stands in stark contrast with its white surroundings. Partially suspended to a sheet steel divider, its sculptural effect is accentuated by the shadows created by the natural light coming from the skylight above.

The building is predominantly clad with light-color clay brick, conferring the narrow structure with a monolithic expression. The choice of this durable, noble material for all three façades was intended to stress the importance of dealing respectfully with Montréal’s urban landscape, including its back alleys.

A playful entry porch enlivens the minimalist composition of the tone-on-tone façade. The gray-painted steel stairs and marquees contrast with the light-hearted graphics of the laser-cut guardrail. Eastern cedar used for steps and soffits adds a final touch to the overall composition.

La DUETTE evolved from a desire to provide two families with modest yet comfortable homes on a tight urban site. This recent addition to the neighborhood is the expression of a renewed urban typology. It is also the built proof that contemporary ways of life, and close connection with nature, can be integrated into the city’s traditional fabric. 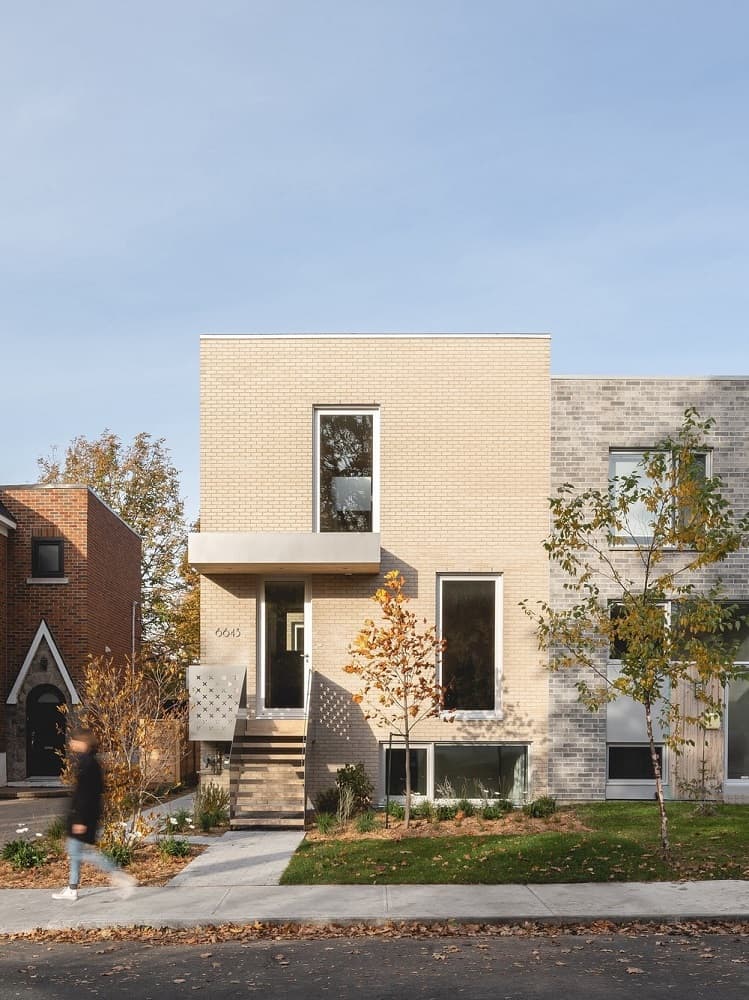 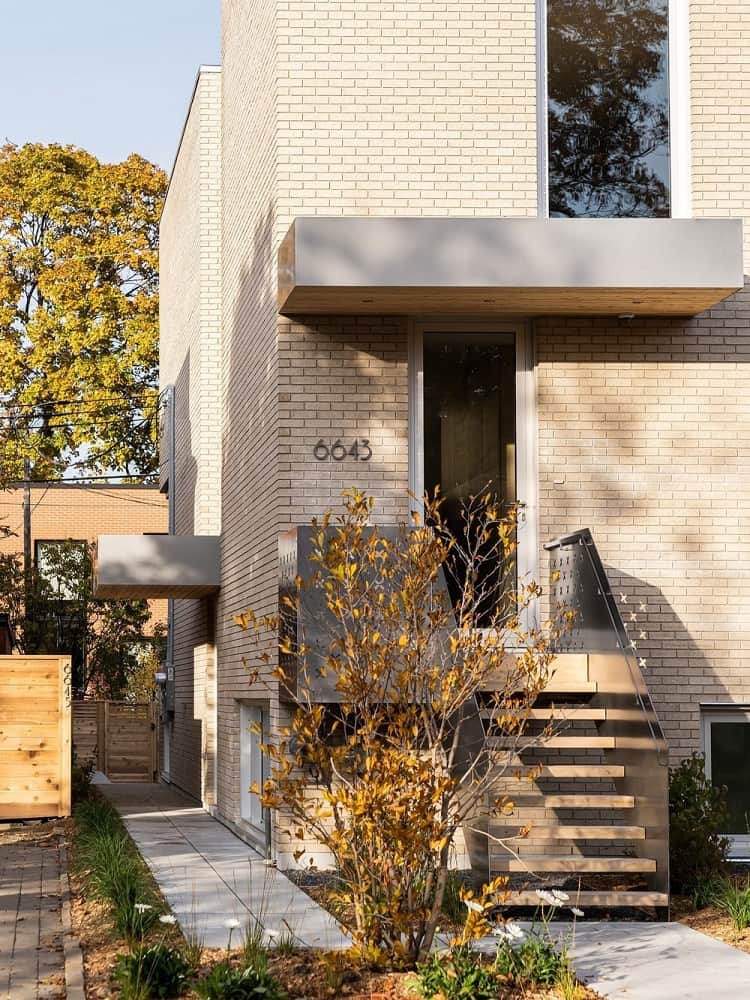 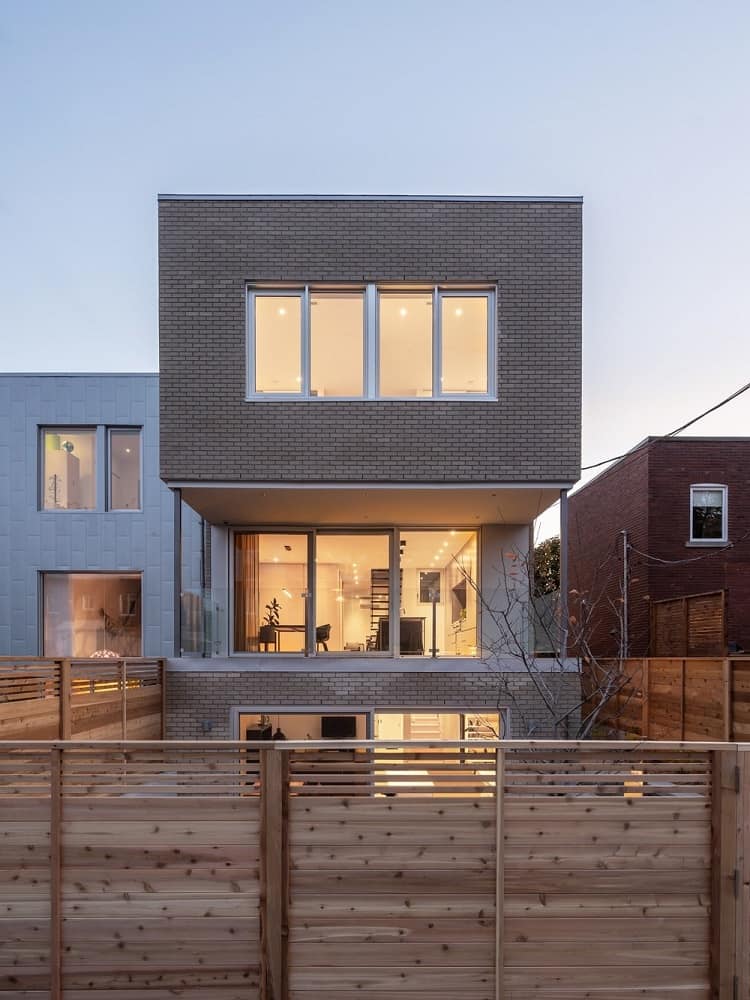 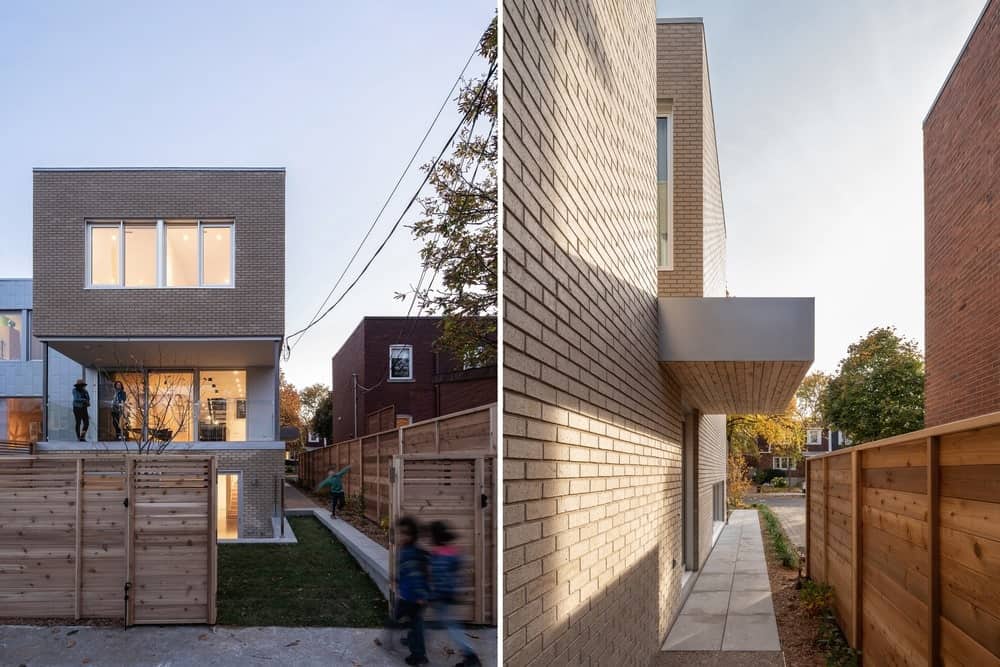 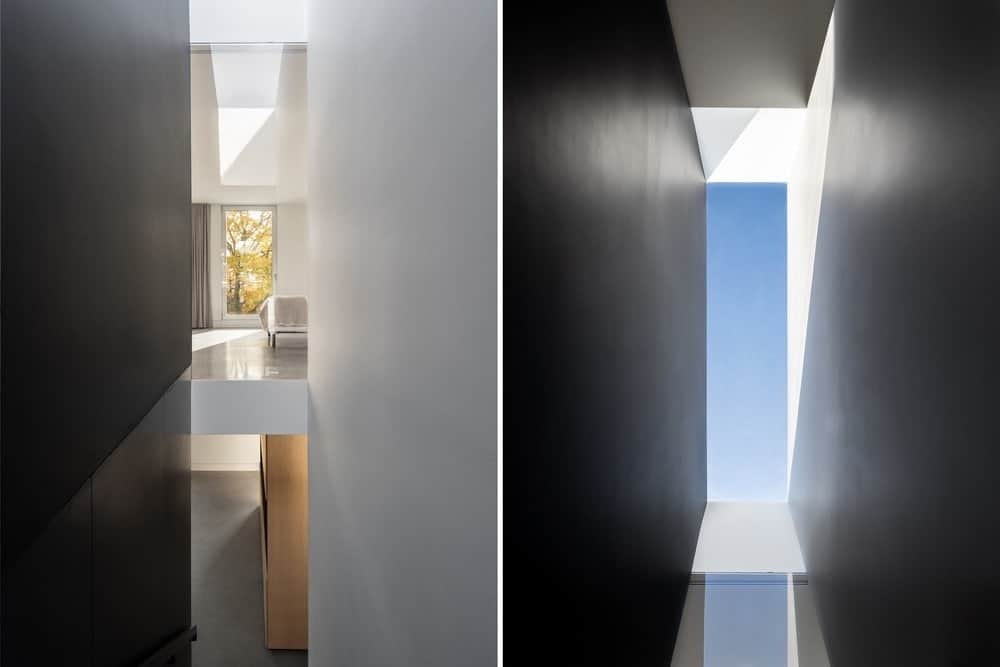 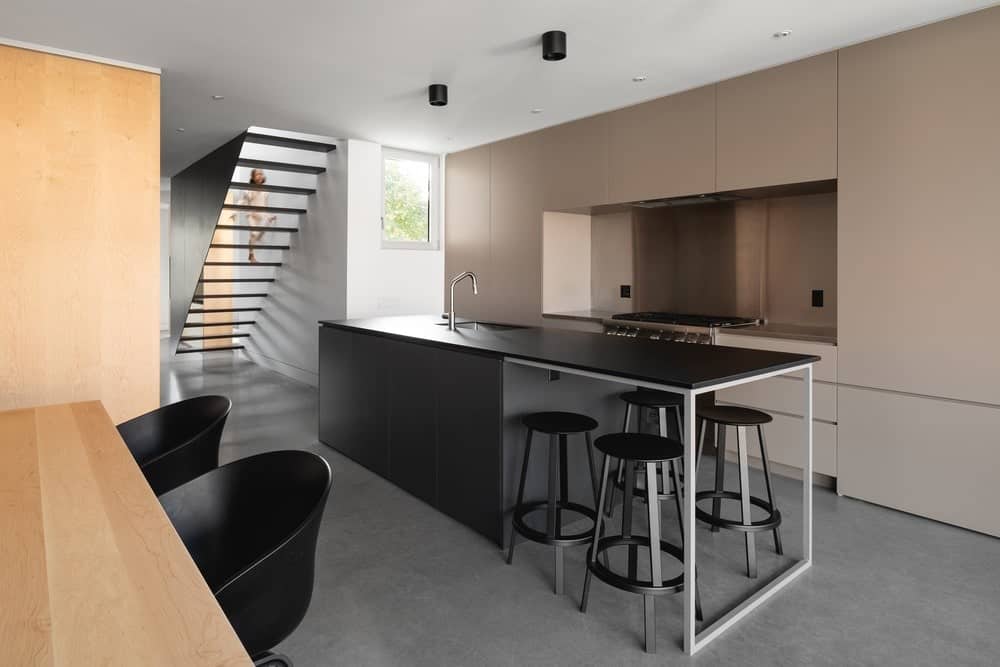 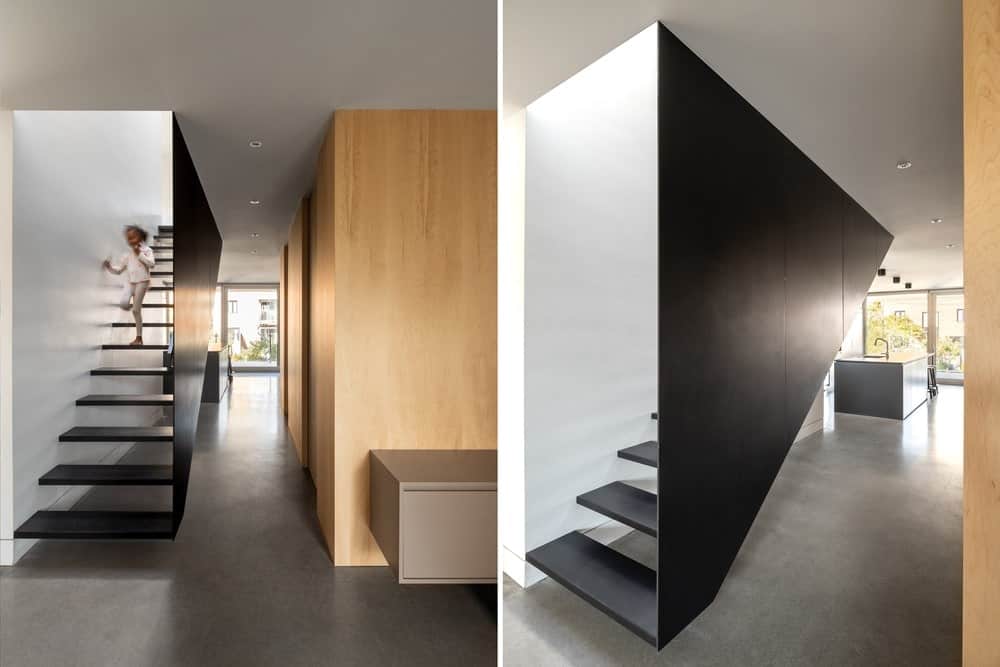 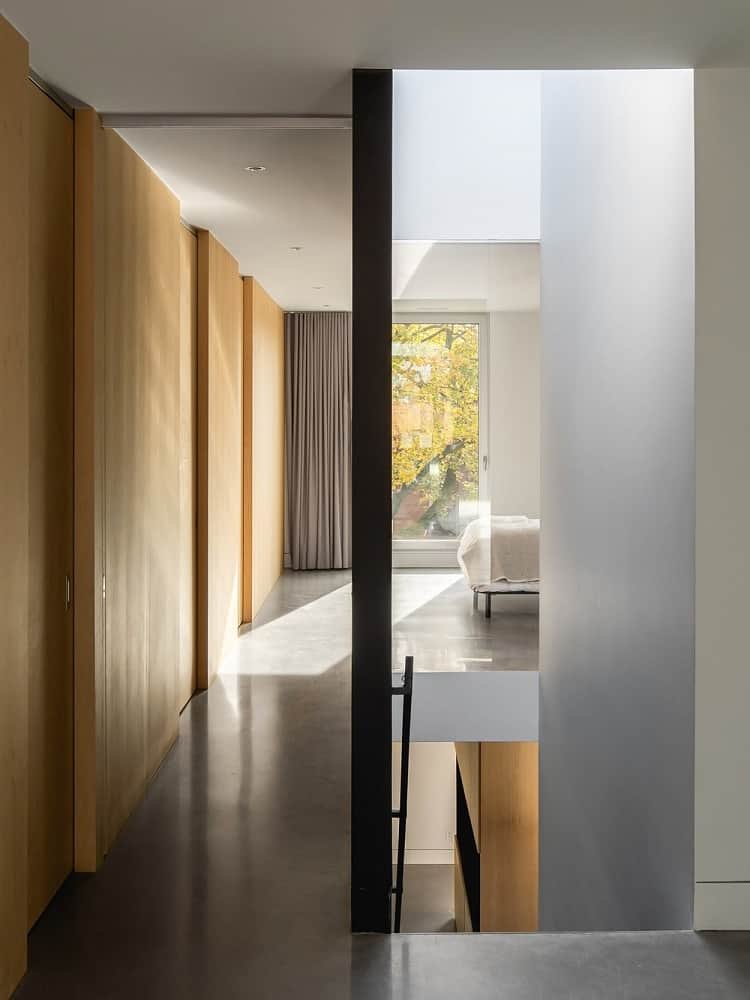 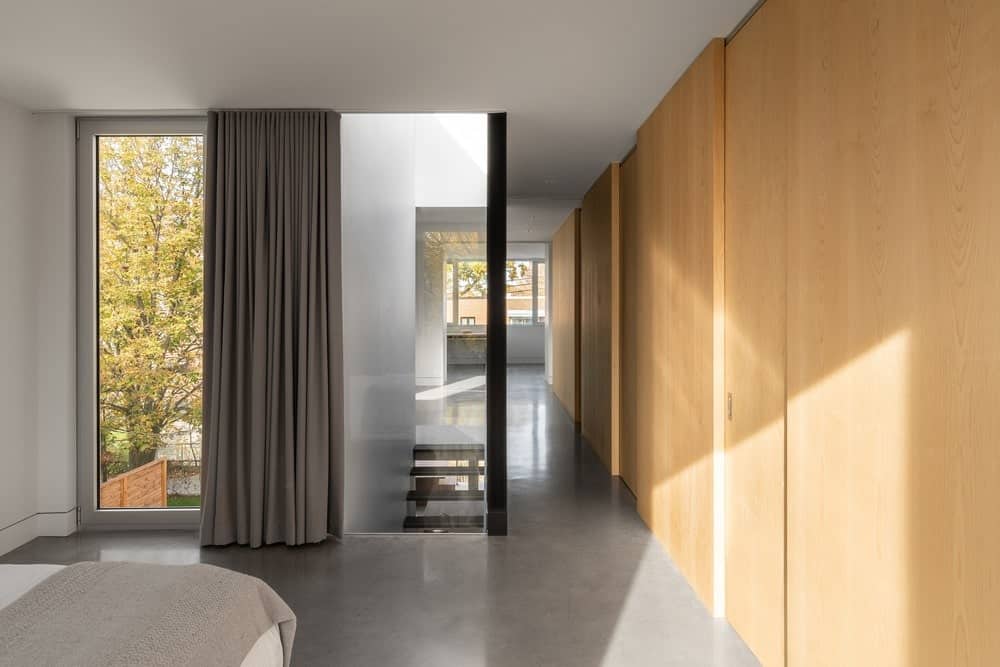 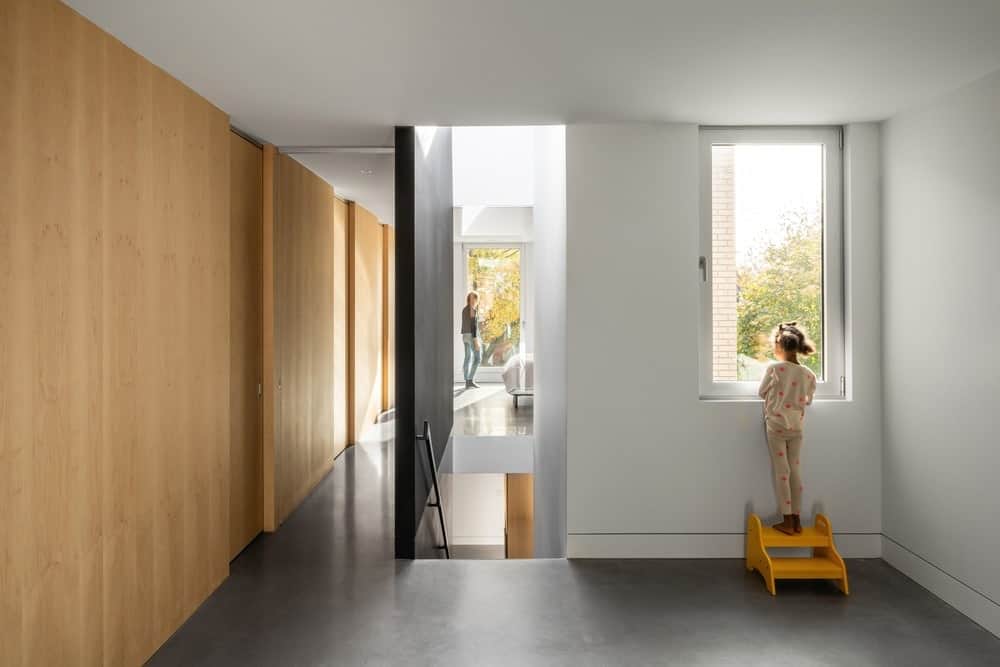 Name of the project: La Duette

Led by architect Natalie Dionne and her partner Martin Laneuville, the firm Natalie Dionne Architecture has received widespread attention over the last few years for its residential work. Known for their ability to transform stern interiors into vibrant living spaces, the architects have renovated and built several homes in Montréal’s older neighborhoods. Their thorough understanding of the city’s fabric, and its housing stock, has led them to search for respectful and innovative solutions in every one of their projects.

Their first significant work was the U-House, which the firm designed as a home/studio on a derelict Montréal site. In 2009, this project received a major architecture award as did, a few years later, the T-House they built in a country setting. These two houses, as well as their most recent interventions, have appeared in numerous publications. Previously involved with visual arts and in the film industry, Dionne and Laneuville possess a deep understanding of lighting and scenic effects. Clearly visible in their projects, this knowledge has helped them come up with unusual concepts that bring poetry to daily life.