Tete-a-Tete Chairs face opposite directions, so how are they head to head? What was the purpose of this piece of furniture that is probably making chiropractors sob tears of joy at all the billings they’ll get, and why is it resurfacing on Twitter? Let’s find out!

As per usual, I was shitposting on Twitter and came across something that piqued my interest. It wasn’t just another viral meme I wound up hopping on, like the color commentary on Dr. Phil’s son’s completely batshit house inspired by several Tim Burton flicks. But I saw the above couch and a few others like it, and wondered what kind of contortionist would’ve come up with it!

It turns out that these S-shaped couches were introduced by the French in the early 19th century, then became incredibly popular furnishings in the Victorian era. Dubbed “tete a tete” which is French for “head to head”, the S shape isn’t necessarily the defining characteristic but it’s seen in many Victorian pieces. In order for a chair to be a tete-a-tete, it must share a center armrest while the two seats actually face the opposite direction.

Wait, so if they face opposite directions, how the hell are they head to head? What was the purpose of this piece of furniture that is probably making chiropractors sob tears of joy at all the billings they’ll get, and why is it resurfacing on Twitter? Let’s find out!

Related: YourSpace Launches Home Offices | Why I Stopped Working From Home and Leased an Office | Adjusting to Working From Home | Urban Planning and Home Design After Covid | Urbanization 2023 | Would You Take $10k and Move to Alabama to Work Remotely | Start a Gay Communist Game Developer Collective with Rural Development Multi-Family Housing

The Victorian Origins of the Tete-a-Tete Chair 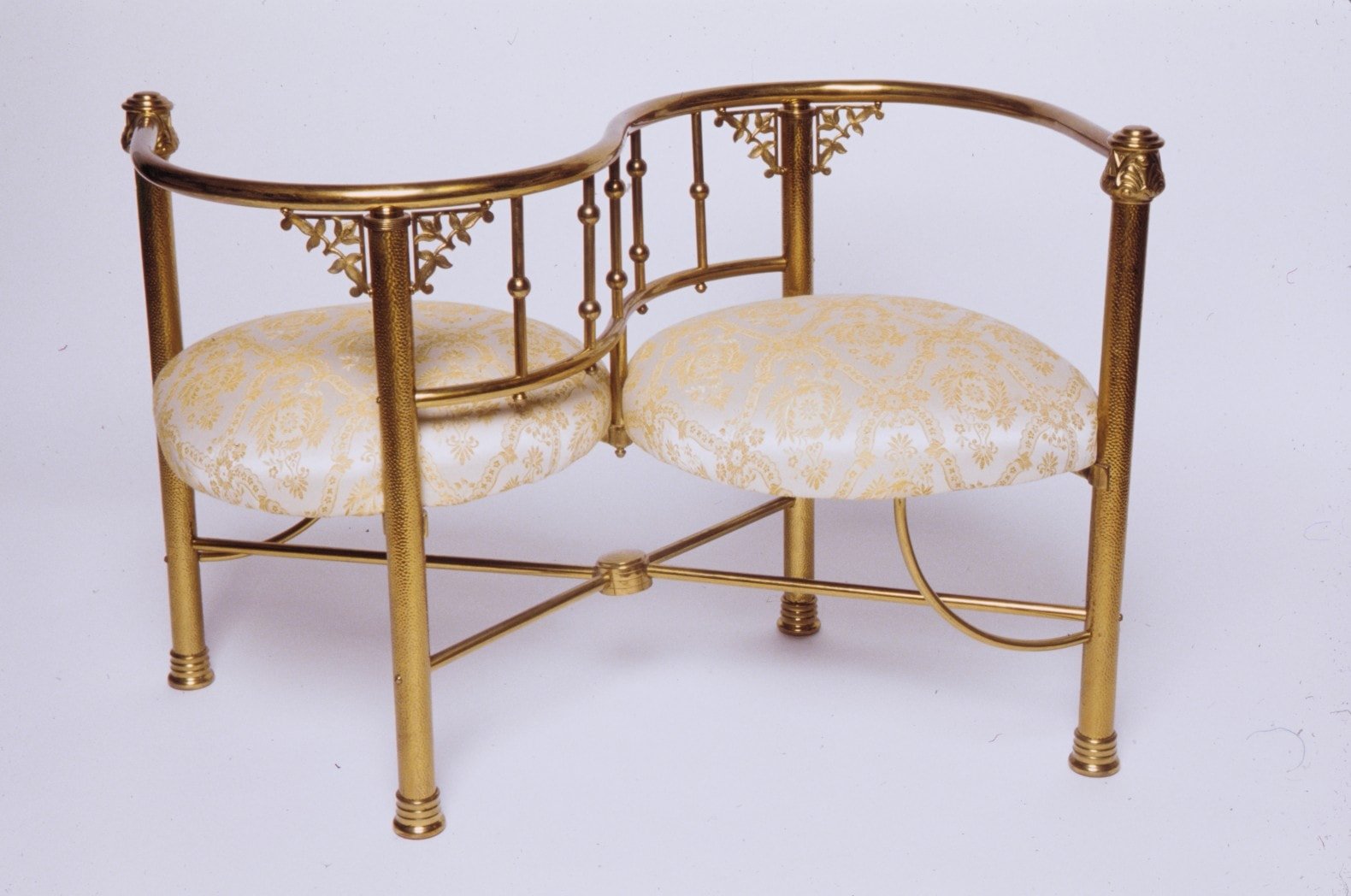 Brass couch on display at the Metropolitan Museum of Art.

Apparently, the whole idea is that these benches were made for dating in the Victorian era.

It was very no-touchy, women are indecent sluts for showing their ankles, and men are such slaves to their nether regions that goddamn TABLES need to wear leg coverings, and subsequently, young couples were under microscope-close parental supervision or perhaps snitched on by series of underpaid governesses. Hence, tete-a-tete chairs were also known as courting benches or a “kissing bench”, even though I’m getting a back spasm trying to imagine making out with someone sitting in this thing. Pretty much, the entire concept was that your parent or guardian wouldn’t be too far away and you could speak face-to-face while sitting in this contraption and be able to steal a kiss without your hands or other body parts actually touching.

But while the tete-a-tete chair was predominantly associated with Victorian era courtship, it was also called a “conversation bench” or “gossip chair” because the design supposedly made it easier for two people to comfortably lay back and talk to one another.

This made the S shape prevalent among actual antiquities because it was easier to work that distinct French style in, what with the ornate polished wood and tufted cushions that were designed for people who never did a day of manual labor in their lives. But tete-a-tete benches don’t need to have the S design, they can be in straight lines and employ metal and other materials provided that the other seat is facing the opposite direction. 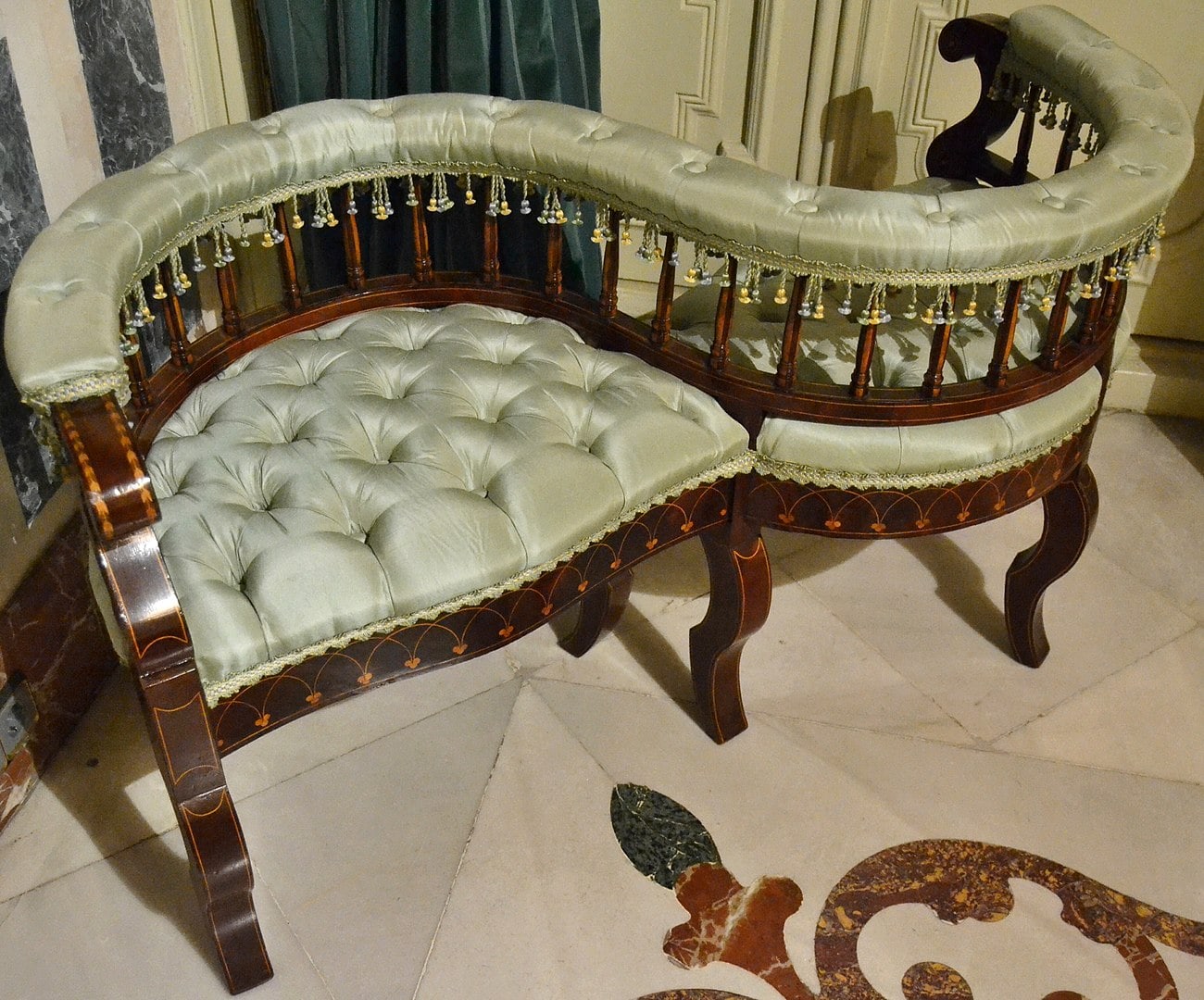 Like with many well-known Victorian pieces, this was not the kind of chair that was found in your average working class home. No, us plebes sat on normal fucking chairs. It was the gilded gentry that had tete-a-tete benches in parlors, sitting rooms, or right by the front door where it was more tenable for a member of the household to keep a watchful eye on any gentleman callers. In some ways, things never really changed what with the trope that was so present in 80s and 90s movies with the babysitter or oldest sibling trying to catch a snog on a larger, single-direction couch with no parents around. These days, it’s trying to keep your roommate’s Tinder date from messing up your side of the couch in the shitty old apartment you both share well into your thirties.

You know, I’m starting to really understand the anthropological origins of this particular meme now. Gentlemen callers had to contort themselves in furniture like this, nowadays it’s considered a step up if it’s not a real, literal bird-like nest made out of clothes. This was the work of 120 years of various grades of social repression.

My (24 F) boyfriend (25M) sleeps in a “nest” of clothes and towels and refuses to buy a bed. https://t.co/ngeylSwMlW pic.twitter.com/RsKkfTRtCf 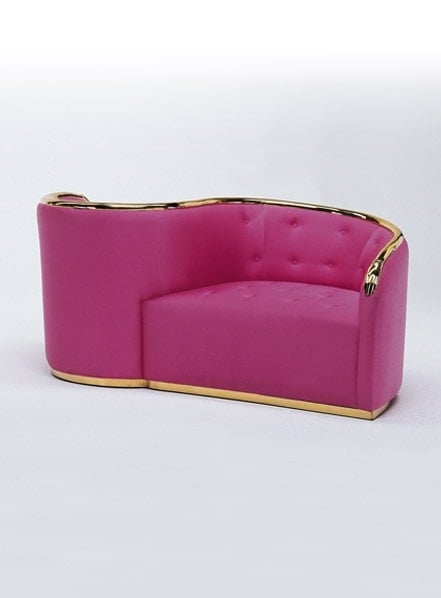 This semi-modern couch by Barcelona Design takes the Victorian concept to the 80s with that berry pink tufting that just SCREAMS “Boomer lady boss about to give some smarmy Wall Street asshole a what-for” with the cocaine magnate gold railing.

There’s now thousands of modern takes on the tete-a-tete bench, even if you won’t necessarily find them at your local IKEA. Actual antique tete-a-tetes from the Victorian era are incredibly rare and difficult to find, and more likely to be at a museum or an incredibly high-end auction house like Sotheby’s than your average yard sale.

But while there’s more economical and ergonomic versions of the tete-a-tete loveseat out there today from West Elm, Anthropologie, and even Wal-Mart among countless independent furniture designers, I think that this particular furniture piece is going to see a surge in popularity as a result of COVID-19. Here’s why.

Right now, everyone’s focused on the imminent danger that we face by cramming too many people together in an enclosed indoor space. Regardless of which types of chairs are being used, keeping buildings at 50% capacity or lower is paramount to avoid transmission. Whether that bench seats one or three people, keeping it at least six feet apart is the best way to mitigate the risk of spreading this disease. Because the air flow is more constricted indoors and can get exacerbated by dirty air conditioner filters, the best thing to do is avoid going indoors with strangers for now. It sucks, but it is what it is.

Now let’s look a little farther into the future: sitting across from someone isn’t going to be a very risk-averse prospect unless you live in the same household, in which case you’re probably sick of each other by now. 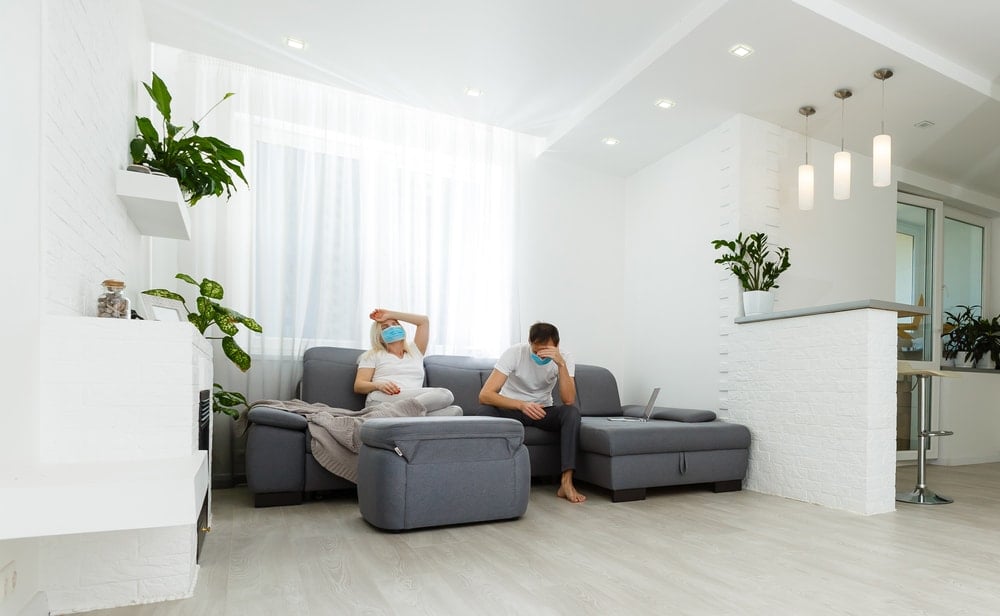 NO ONE can even freelance, let alone hold down a job now conducted through Microsoft Teams, and run a coronavirus homeschool at the same damn time. We’re going to hear so many tales of COVID divorces 10 years from now.

When things start to reopen at a more rapid pace, thousands of people are still going to be incredibly cautious. This pandemic isn’t just a minor inconvenience that caused hundreds of thousands of deaths, it’s a traumatic event that is likely going to shape several generations to come. The whole social distancing thing has been incredibly hard on us, but people are going to be overly cautious getting back out there. When you can end up dying with a tube up your nose just from going to a party? Well, it’s going to be a while before we’ll feel safe hugging our friends and cramming into jampacked nightclubs, convention centers, and so on.

The tete-a-tete bench can help minimize contact among friends without placing two separate chairs several feet apart to the point that conversation becomes impossible. Most of all, you can tilt your head or even just stay still so that any respiratory droplets are less apt to go in the same direction compared to sitting across from each other. It’s only even more effective if you’re both wearing masks and sitting outdoors.

While millions of people can’t wait to dive back into the tete-a-tete chair’s original intents of gossip and dating without the use of apps, this whole episode is making us reasonably cautious. You’re probably not going to wear a Hazmat suit after jumping at your first chance to take that random Zoom date to the next level, but regular masking and the whole “risking grievous lung damage or death while being served hot wings by a waiter in a face shield” thing really puts a damper on getting back to normal. It’s going to be a long and gradual process where infectious disease experts butt heads with every level of government plus the sentient Target parking lot that is Facebook.

But regardless of how you feel about this, simply talking can generate respiratory droplets that linger up to 14 minutes regardless of which direction those droplets are headed. Coughing and sneezing generate thousands of times more droplets that could cause the virus to spread, but talking alone can also contribute in enclosed settings.

Extended face to face conversations need to be on moratorium right now, but as society begins to reopen, talking without having to face each other is a prospect we just might have to look forward to. If you just don’t like making eye contact or asked why you don’t smile enough, or whatever other nosy observations total strangers get in your face about, talking through a tete-a-tete furniture piece just might be something else we’ll get in the future that introverts won’t to come back from!