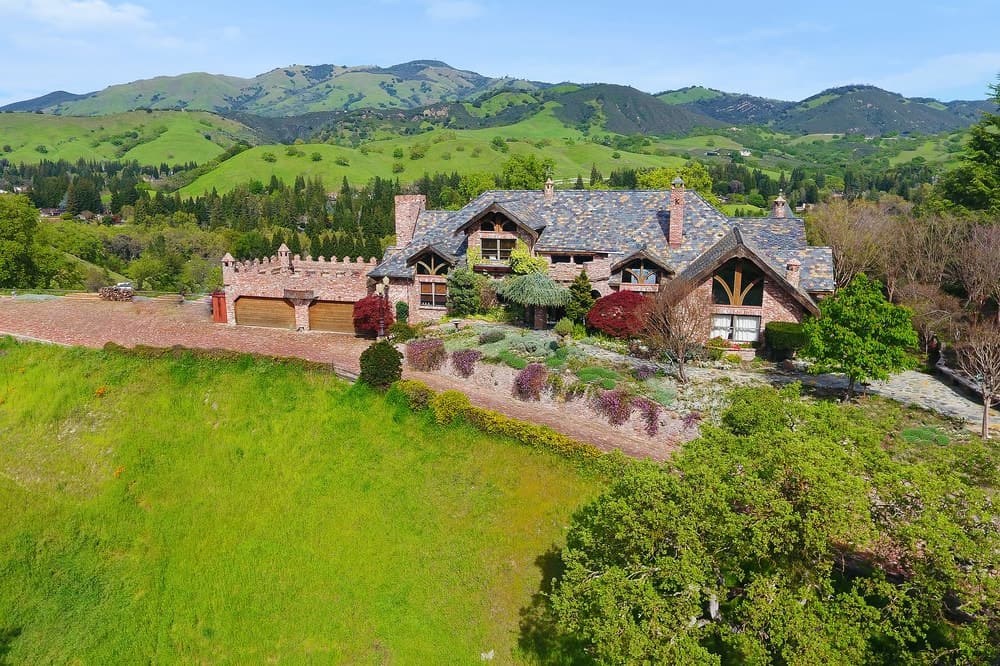 The castle-like mansion known to locals as the Castle of Alamo is now on the market. This breathtaking mansion nestled in the valley of the Mount Diablo mountain range is currently priced at $3.475 million.

The beautiful castle-like mansion is constructed on a hilltop with almost 360-degree views. The 4,476-square-foot home was built in 1988 which was a massive undertaking using mostly recycled materials from various sources.The undulating brick pattern throughout almost all the walls of the home, which was made from 120,000 salvaged bricks, was an original design by Carr Jones, a local architect and engineer.

The listing agent of the Castle of Alamo is Melissa Fulop from Compass Realty of the Sycamore Office in Danville, California.

Nestled in a valley of the Mount Diablo mountain range just east of San Francisco in Alamo, California, a bedroom community of the great city, is a castle-like mansion that takes in the rolling green countryside framed by mountain peaks. Known to locals as the Castle of Alamo, this property takes material reclamation to an unexpected new level with a twinkle of whimsy only 28 miles from lunch at Fisherman’s Wharf. It is now for sale, priced at $3.475 million.

Sited on a hilltop in Alamo with almost 360-degree views on 2.22 acres, the 4,476-square-foot home was built in 1988 taking three years to complete. A massive undertaking, it was constructed from huge recycled beams, wood and ironwork along with 120,000 salvaged bricks found in an old San Francisco warehouse.

Other materials were recycled from barns, old department stores, a bar and even an old highschool gym. The undulating brick pattern throughout almost all the walls of the home was the brainchild of Carr Jones, a local architect and engineer. Each wooden door was crafted by hand to fit its particular opening and the hinges were forged out of a solid sheet of iron. Adding another visual surprise, the formal dining room walls are sheathed with hand-hammered sheets of copper.

Consisting of three bedrooms and three baths, there are slate radiant-heated flagstone floors, an invisible waterfall trickling through an indoor rock feature, soaring beamed ceilings, eat-in kitchen, a mezzanine level overlooking the first floor accessed by a staircase made out of church pews.

Adding yet another touch of interest, the roof rafters that protrude through to the outside of the structure have hand-carved faces, animals and other objects. There is also an attached three-car garage. Outside is a large terrace over the garage with lots of space for entertaining and outdoor dining and dancing with spectacular views. The position of the home on its hilltop ensures privacy and tranquility.

Now for sale, the Castle of Alamo is a sculptural residence composed of hundreds of thousands of reclaimed pieces creatively knitted together to form a majestic home with views of Mount Diablo and the Las Trampas ridgeline. Priced at $3.475 million. The listing agent is Melissa Fulop of Compass Realty, Danville, California, Sycamore Office.