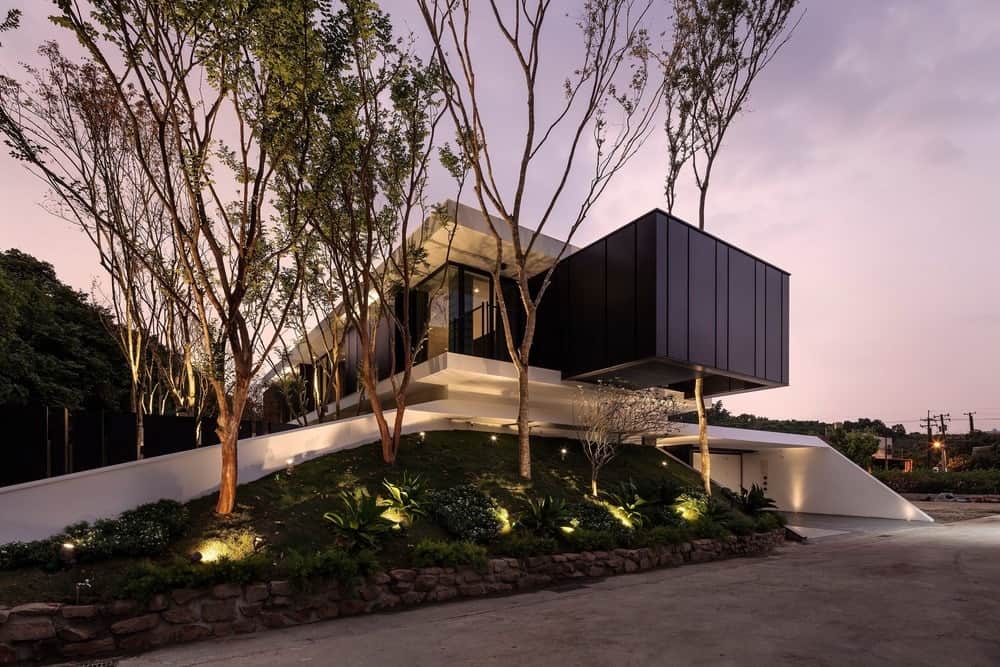 Life in the city is something that everyone tries to escape. It is full of cars, noises, and things that assault our senses. Most people born in a city or who have lived there for a long time quickly grow tired of the hustle and bustle. By stepping out of our comfort zone, people gain the ability to try a new experience. Moving away from the city, and embracing the natural environment.

This project quite far away from the city is what most people in Taiwan would term the countryside. The property is adjacent to the low-density residential area of the Agongdian Reservoir in the mountains of Kaohsiung. At a glance, it looks like an orchard with lots of hills. In front of the property, there is a private 6-meter road that takes into account: privacy and the safety of vehicles entering and exiting. The building is 6.5 meters away from the road.

A green slope was created under the suspended wall on the second floor of the main building facing the southward hilly land. The natural grassy slope in the courtyard echoes the greenness of the hillside slope. A number of Taiwanese beech trees were also planted to further enhance the greenness of the property. All of this allows the inhabitants to easily view the change of seasons while creating a rare atmosphere that is impossible to achieve in a city-like environment.

With this project, the aim was to go further with its connection to the environment. Due to the location of the residence, it was known there would be numerous local wild animals and insect species. A typical project like this would usually cause a lot of disruption to their habitats. The size of the building also affects the combination of internal and external lighting. What was done, was to minimize the effect of the internal physical lighting. This lighting has been positioned in such a way that it doesn’t disturb the habitats in the area.

Many projects try to control the environment, here, the typical south-westerly wind direction was a big consideration during the summer. This wind combined with the facade is why the building is much cooler and requires less usage of electricity to keep it cool. During winter, the hills block the cold wind. The direction combined with the suspended nature of the building means there is greater air circulation which benefits the residents in a hot climate like Taiwan.

Nature doesn’t have to be the second thought for an architect in 2020, it must always be his or her first. The earth isn’t getting any better and everyone needs to do everything they can to reduce the emissions of their projects. That being said, a large number of green trees were positioned around the building taking into the location of the property and attempting to address carbon neutrality.

At the same time, this manages to create shade and filter the ambient air quality. The exterior of the building is made of breathable and environmentally friendly paint with galvanized steel. The interior design is not extravagant and tries to remain ethical and sustainable. Environmentally-friendly recycled materials have been extensively used so the structure is easily alterable. The reduced carbon emissions are expected to preserve more of the planet for the next generation.

The living room has always been the focus of the family. By significantly reducing the cost of construction, critical resources were brought to bear on the spaces inside. The south-facing hilly green slopes situated in the courtyard extends the public space for the family. Over time, the movement of the trees creates light and shadow in the yard which brings a liveliness to the residents. Everyone needs a sanctuary away from the stresses of city life and that is the space that has been created.

Plentiful natural light enters the room through the large floor-to-ceiling windows. This means that we only need a small number of artificial light sources. As time goes by, the owners can directly feel the difference of light, reminding them to cherish the beauty of the moment. 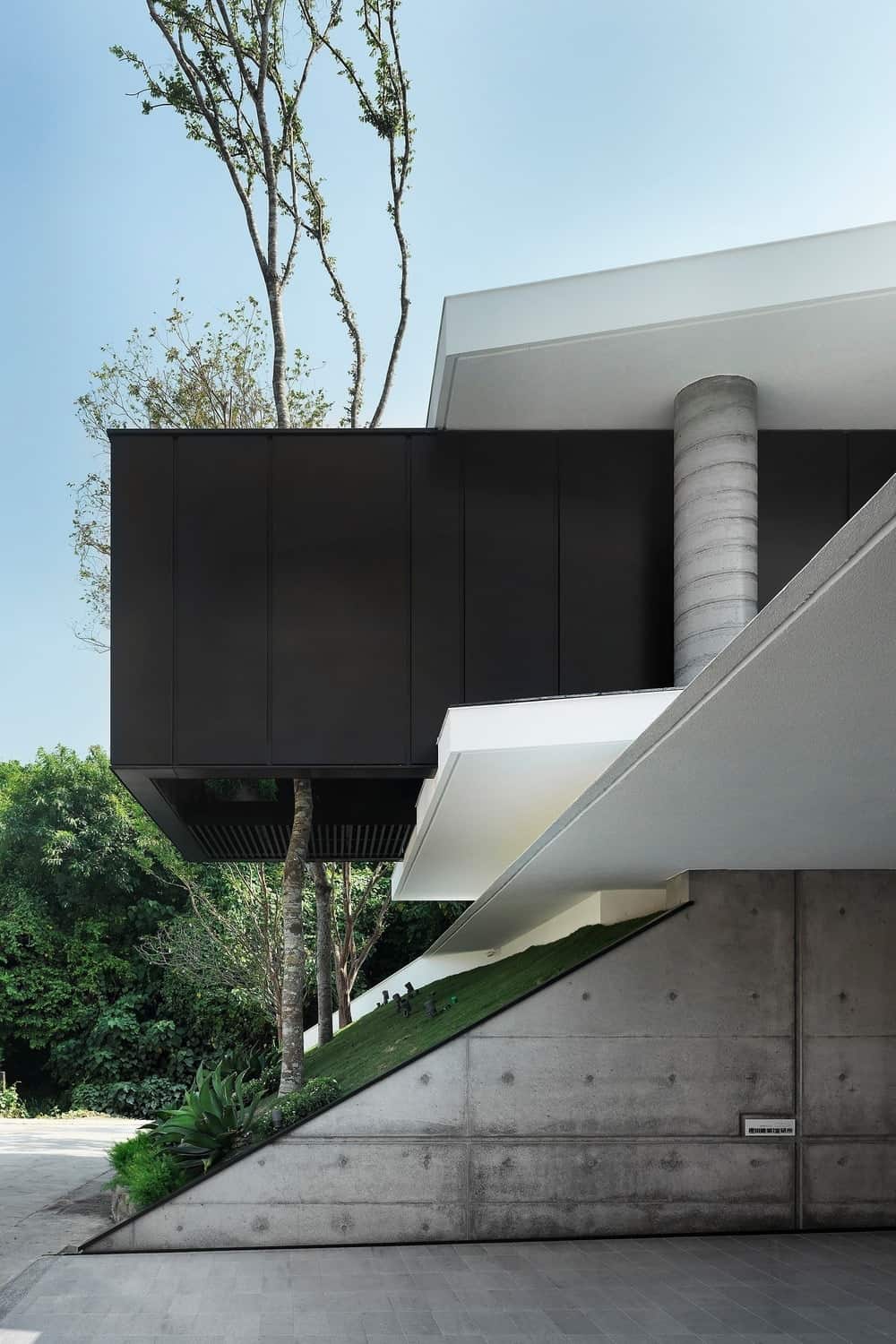 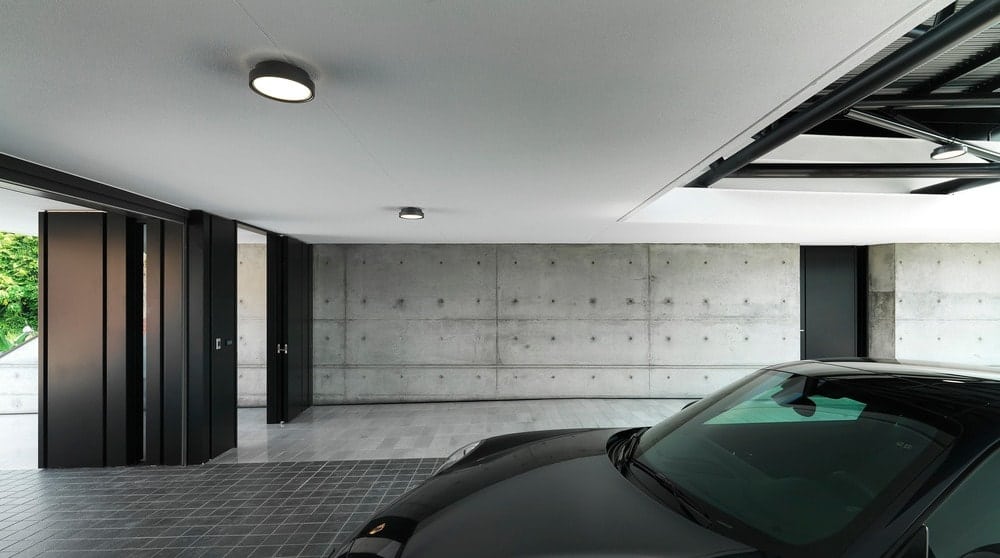 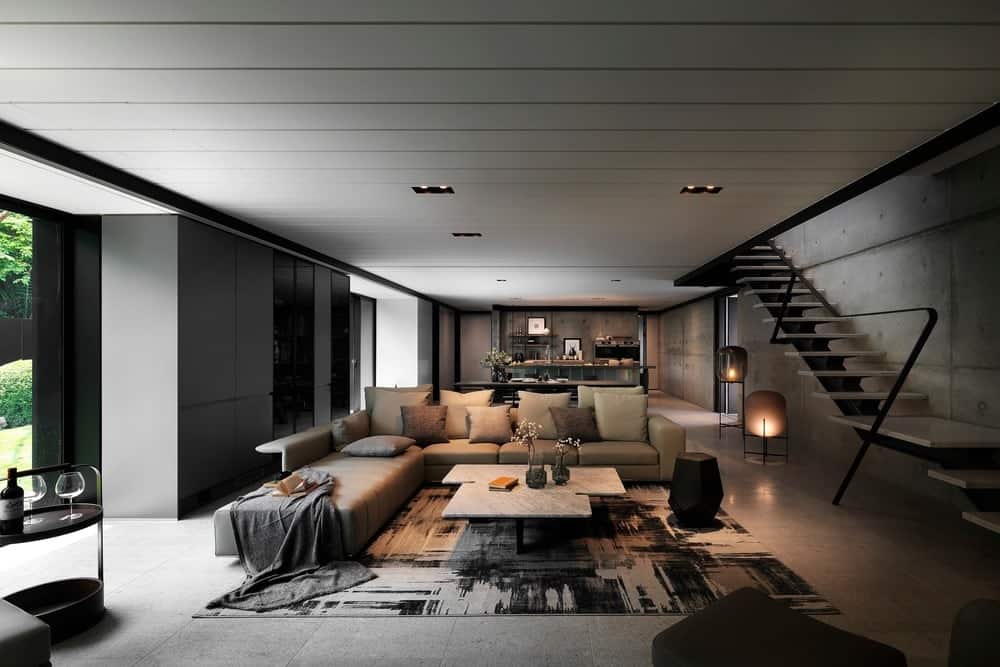 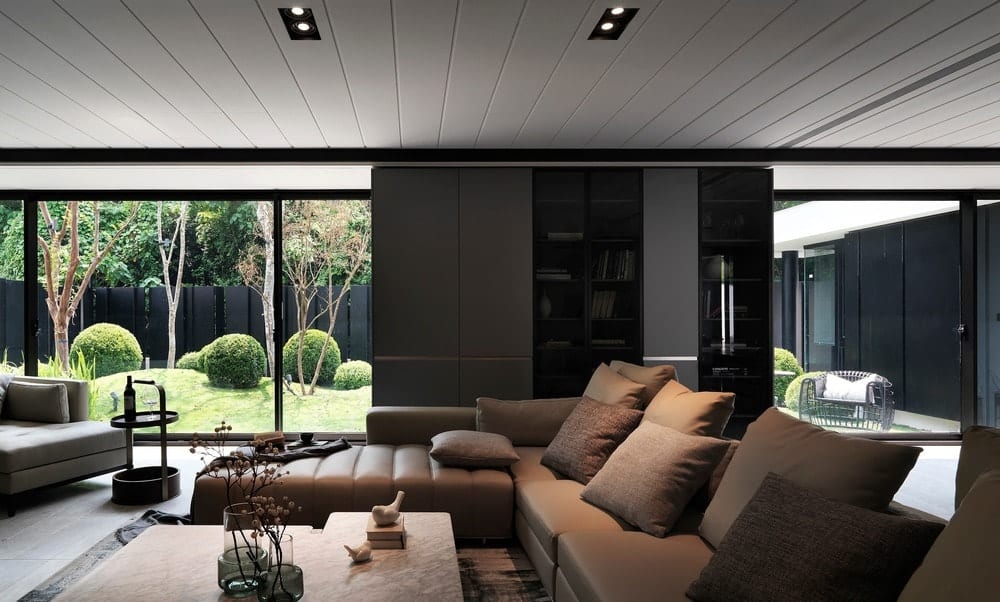 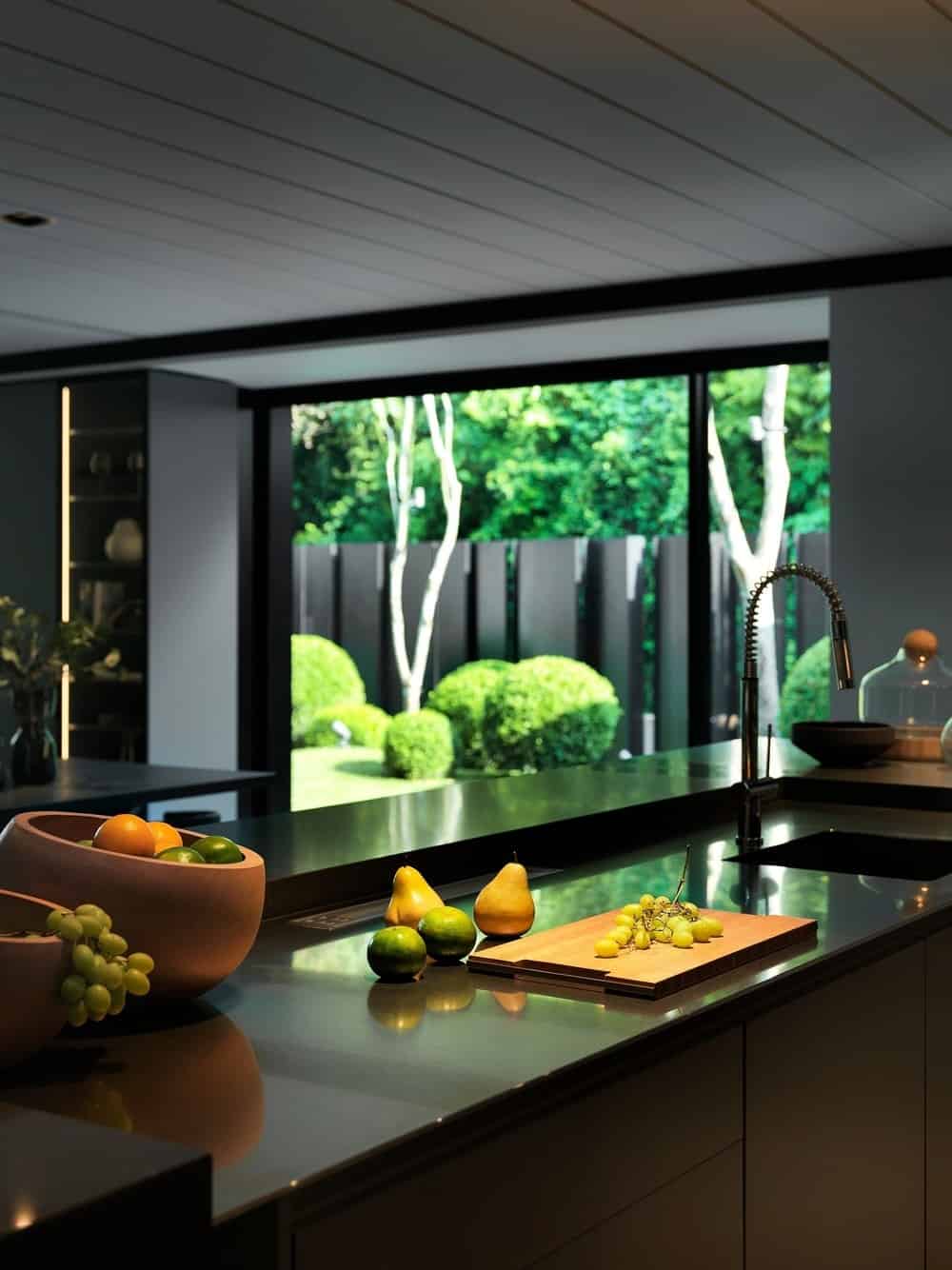 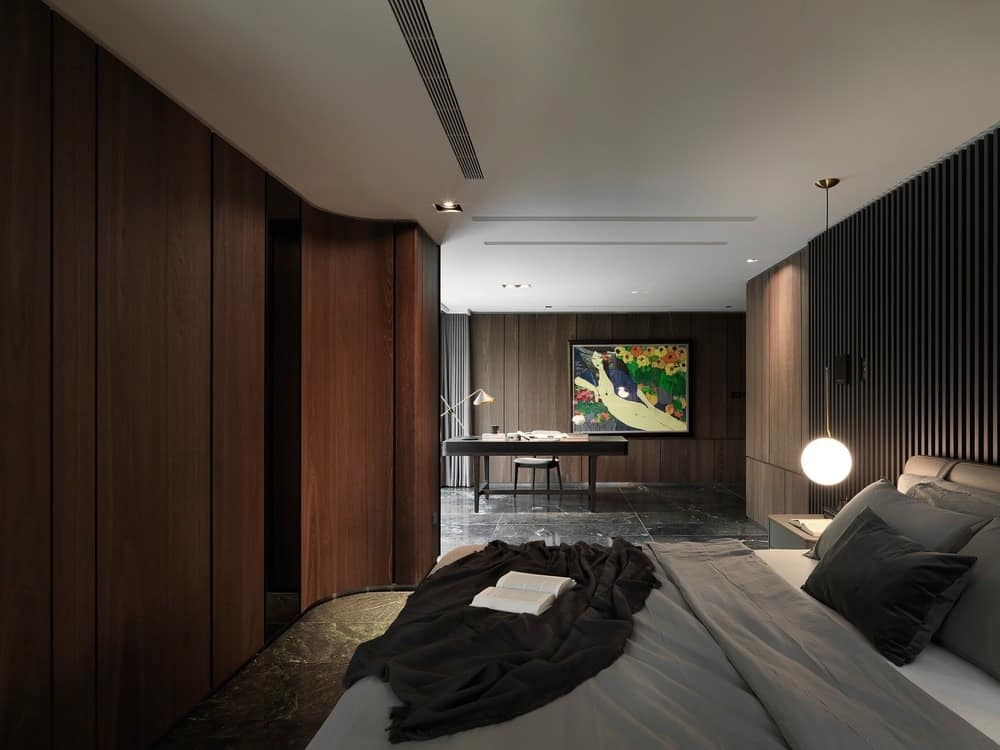 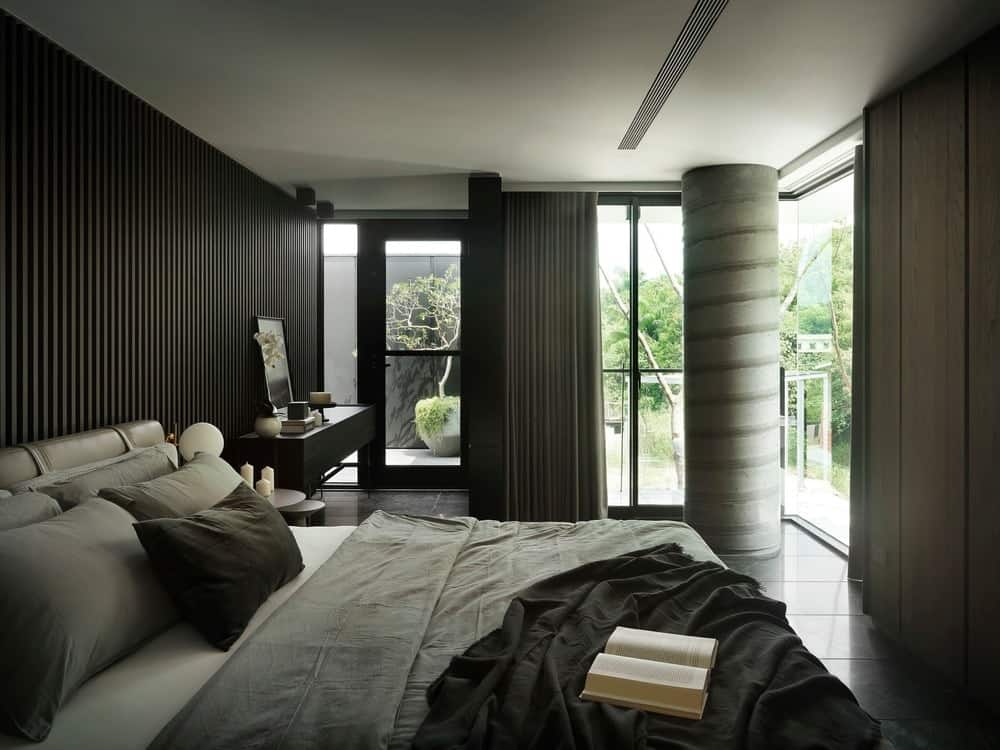 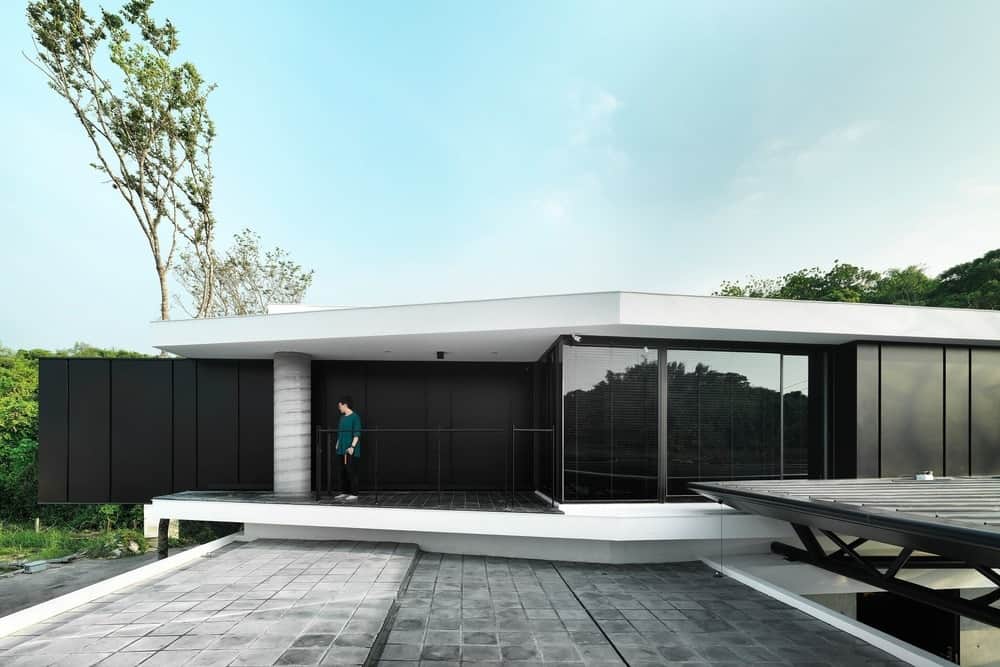 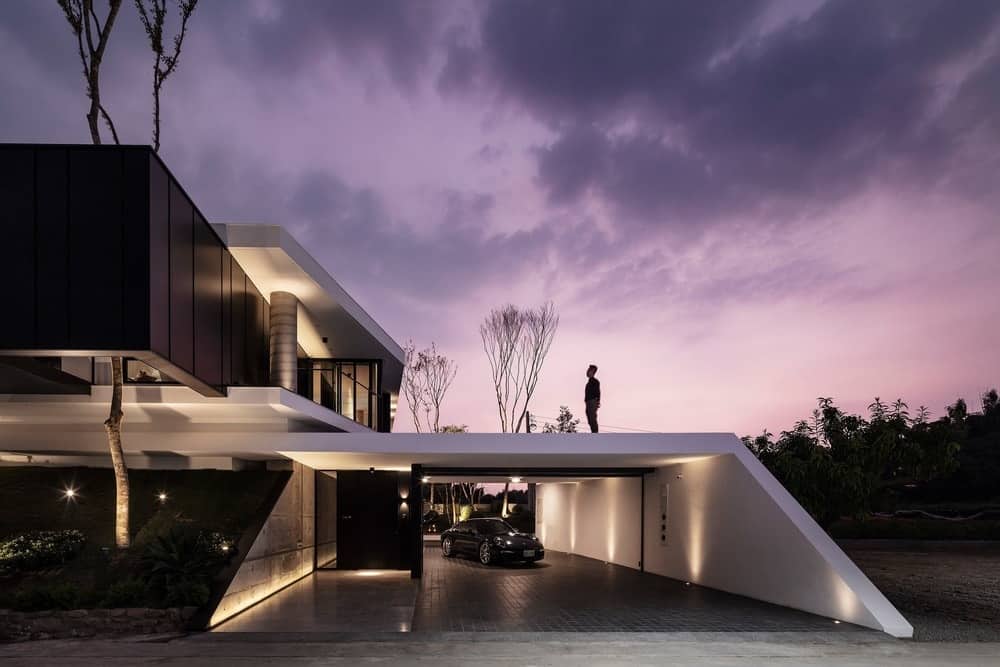 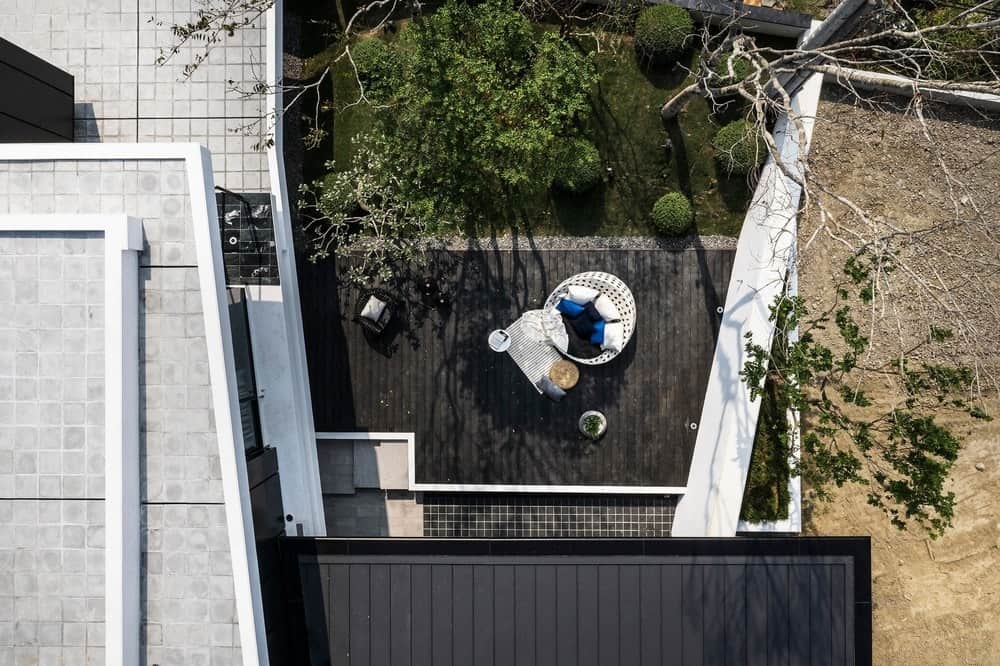 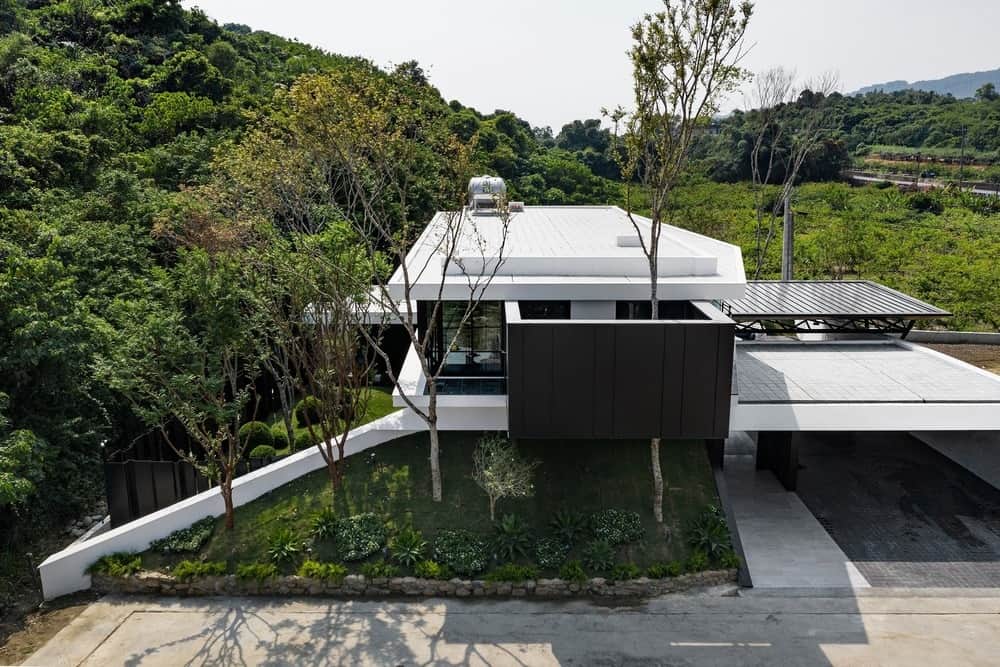 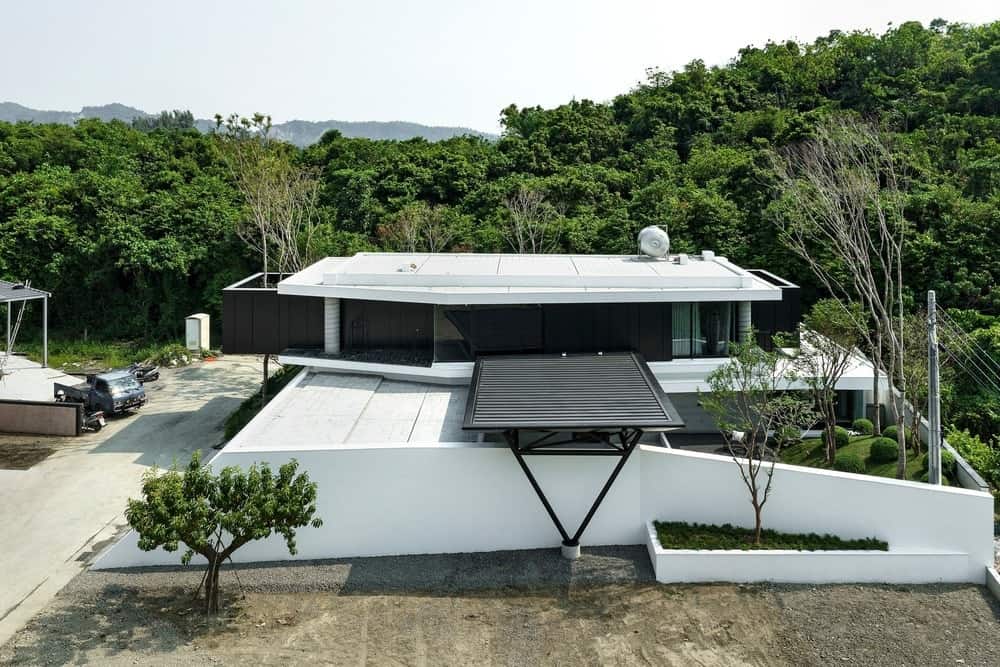 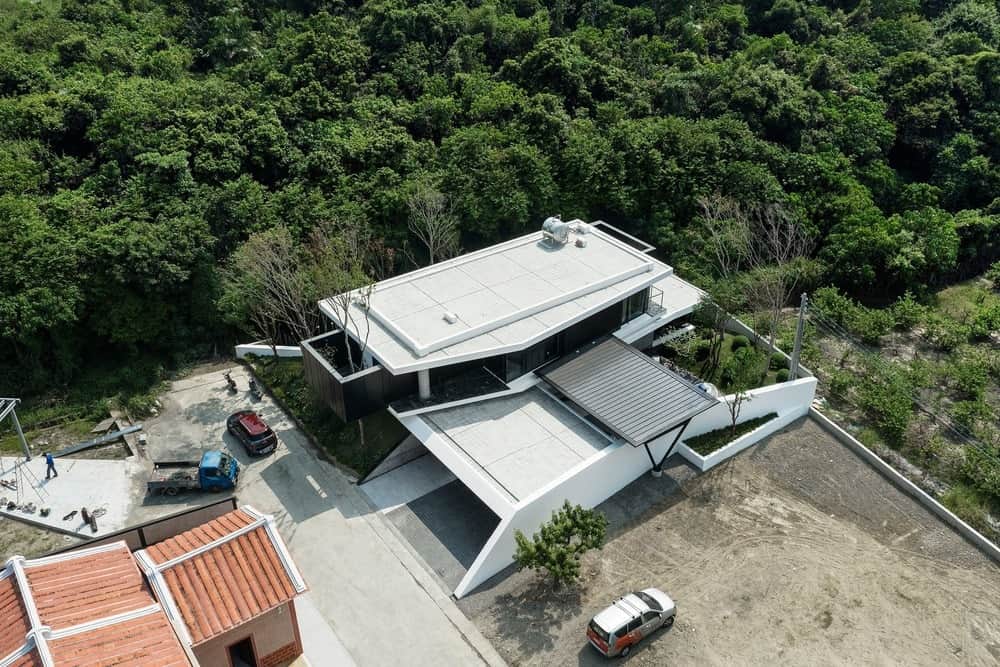 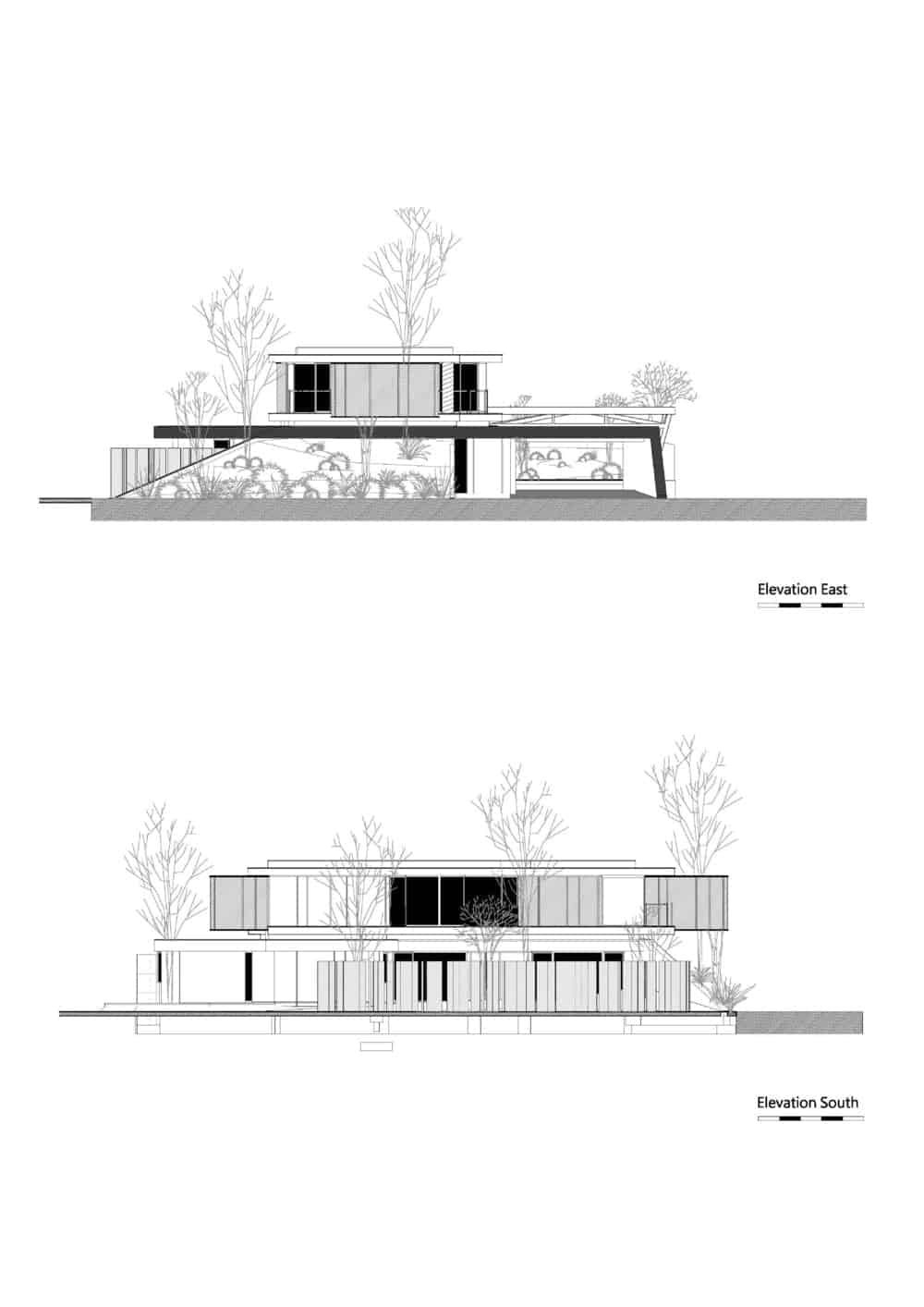 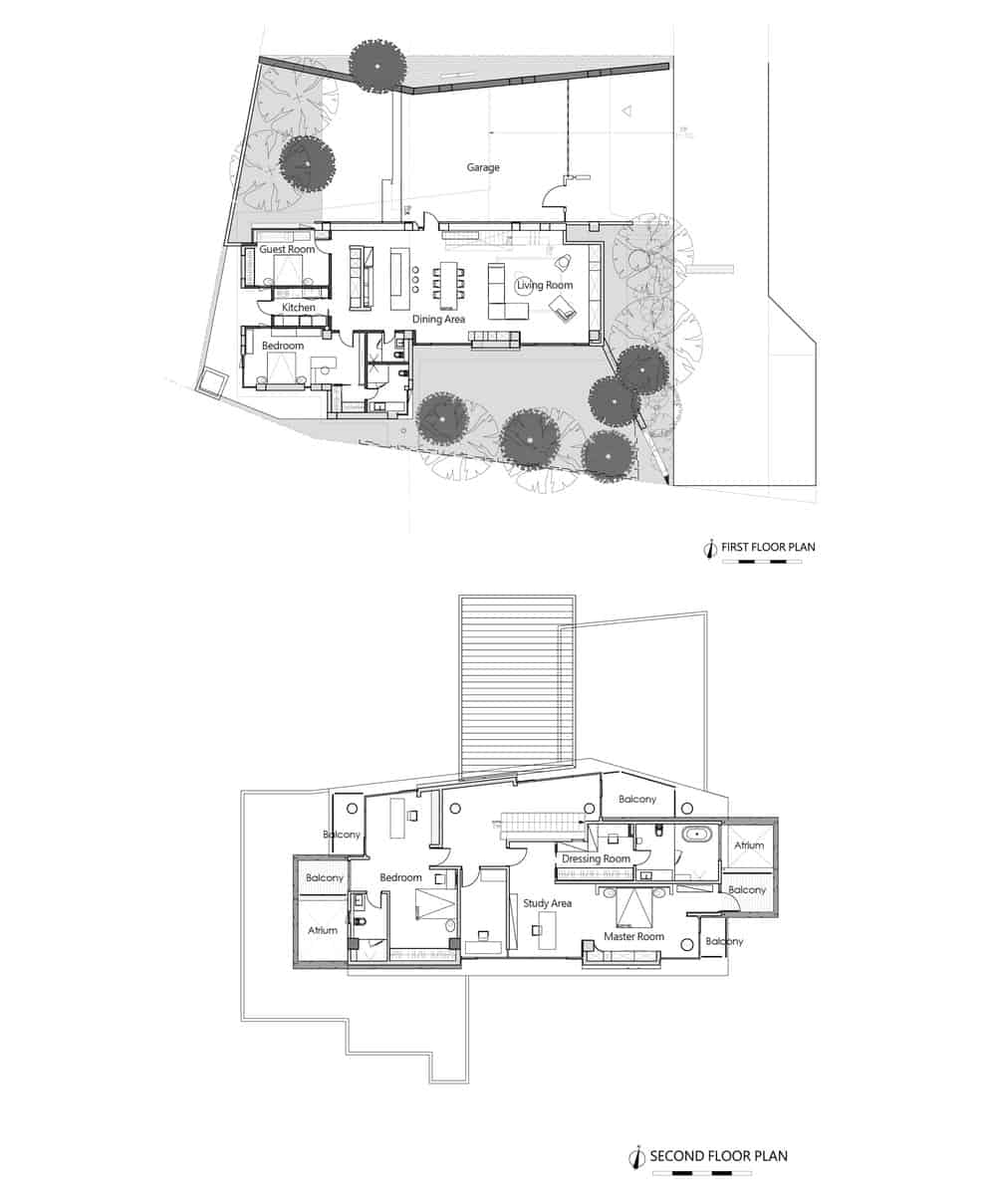 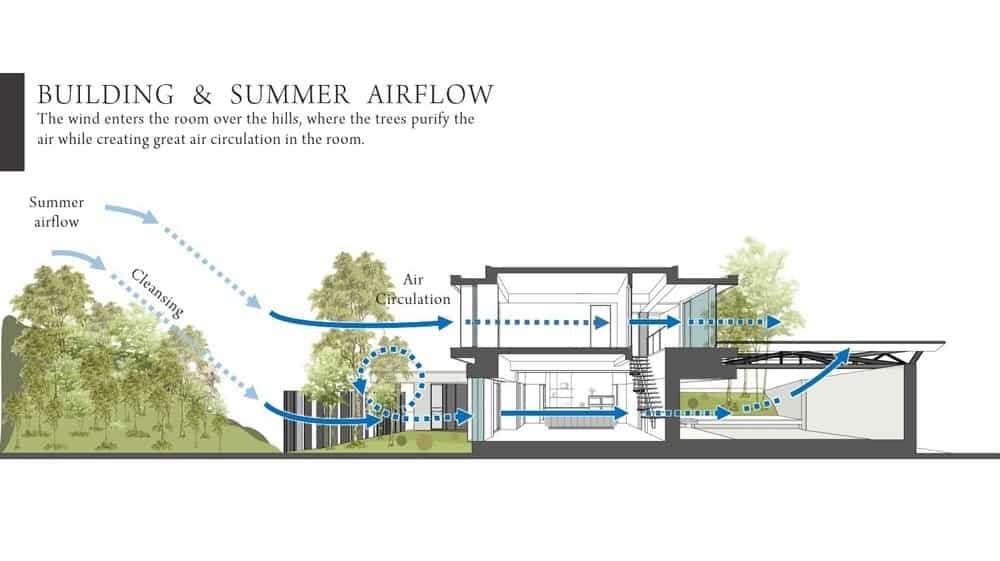 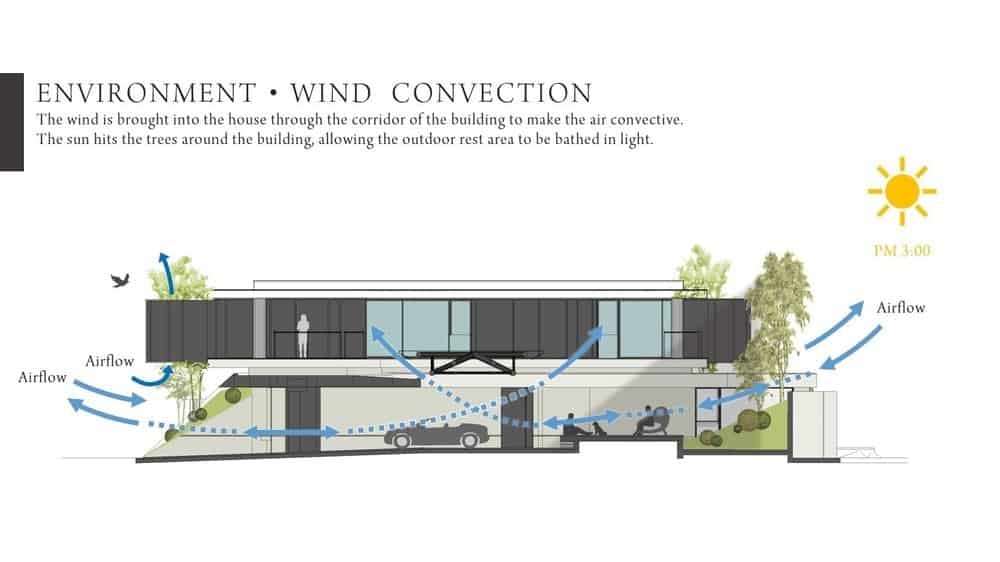 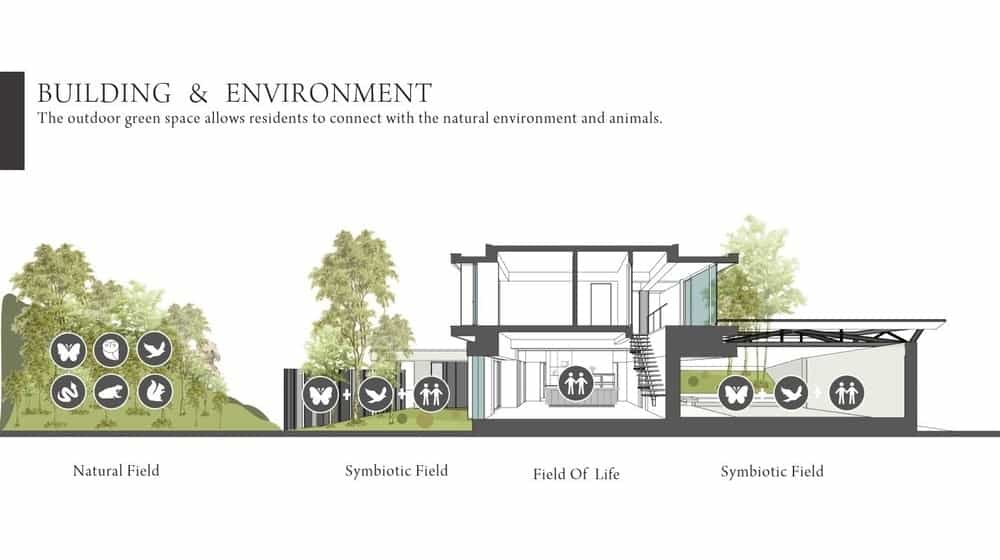 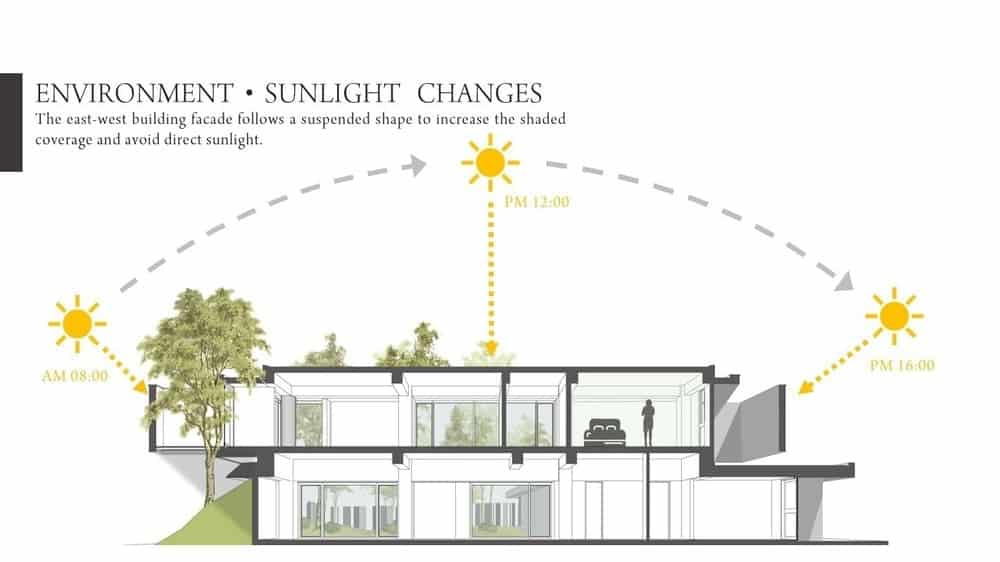 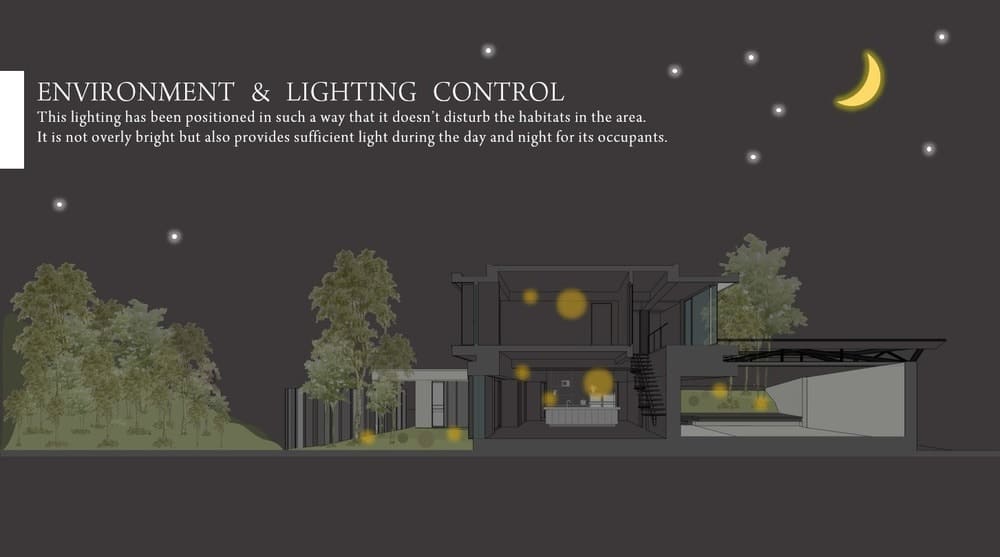 About the designer Ken Lo

Ken Lo is a well-known architect operating a boutique firm in the south of Taiwan. While having no formal training in architecture, in a relatively short time he has managed to assemble an impressive array of projects that have won numerous awards. These days his projects are all energy-saving green buildings. This means that all his buildings ensure adequate ventilation and airflow to minimize the need for extra cooling.

Within a building, the interweaving of natural light and artificial light provides a sense of stability in the indoor environment. Mr. Lo’s relationship with the green environment, architecture and interior space are all presented in his work. This bears similarities between people, life and living space. The thread of nature is something that he has held dear throughout his life and is something he hopes to carry forward into the future.