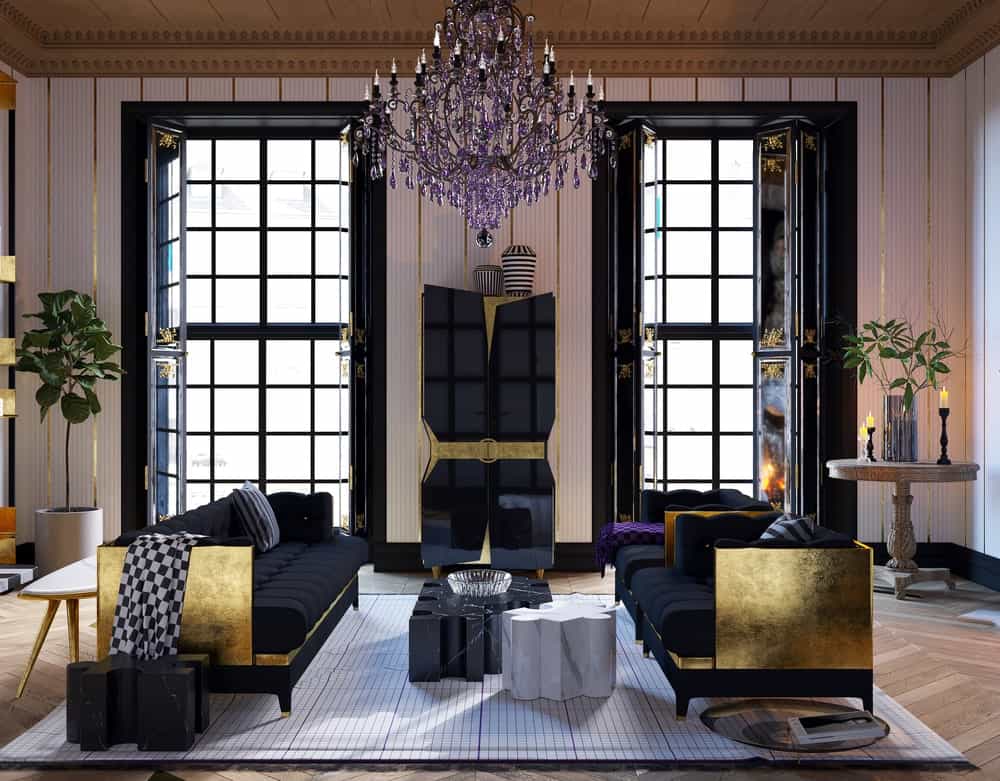 The design project, entitled “Widow Clicquot,” was developed by Ukrainian Design Studio Yuri Zimenko for a young girl from the Fashion industry.

The apartments of this project are located in the center of Kiev – LCD “Chicago Central House”, where the view from the windows dictated to do something unusual and a little crazy!

We gladly began to work on this project. Inspired by the Milan Fashion Show 2019, we came up with the idea to create a similar interior that would not look like more than one interior made earlier that would be in tune with our customer.

The client was ready for any experiments and the only wish was – a love of gold and designer furniture. What we happily helped her with – says designer Yuri Zimenko.

In these apartments, we tried to include the maximum number of authoring developments and techniques in the construction of the space.

Having proposed the concept of apartments to our customer, she accepted the project without corrections and even fell in love with it.

The living room of this house is topped with an eclectic purple crystal chandelier hanging from the middle of the earthy brown ceiling brightened by the pair of tall windows with black frames and folding black covers. 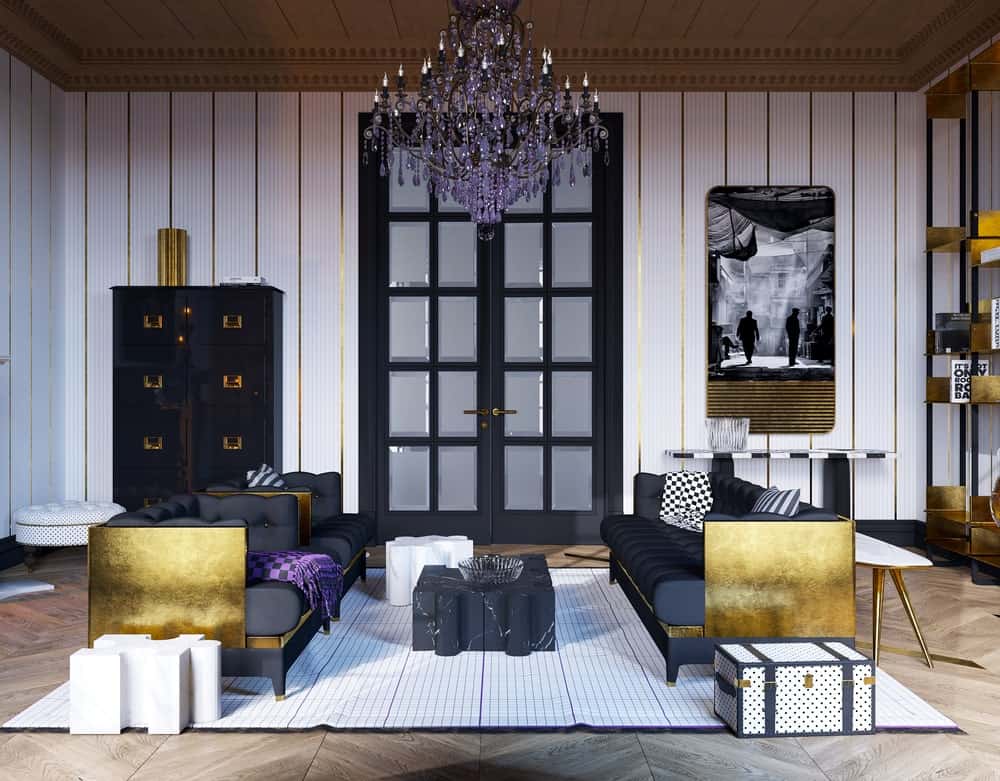 The other side of the living room from the vantage of the windows shows the shining golden sofa set with black cushions on the inside that stands out on the white area rug. 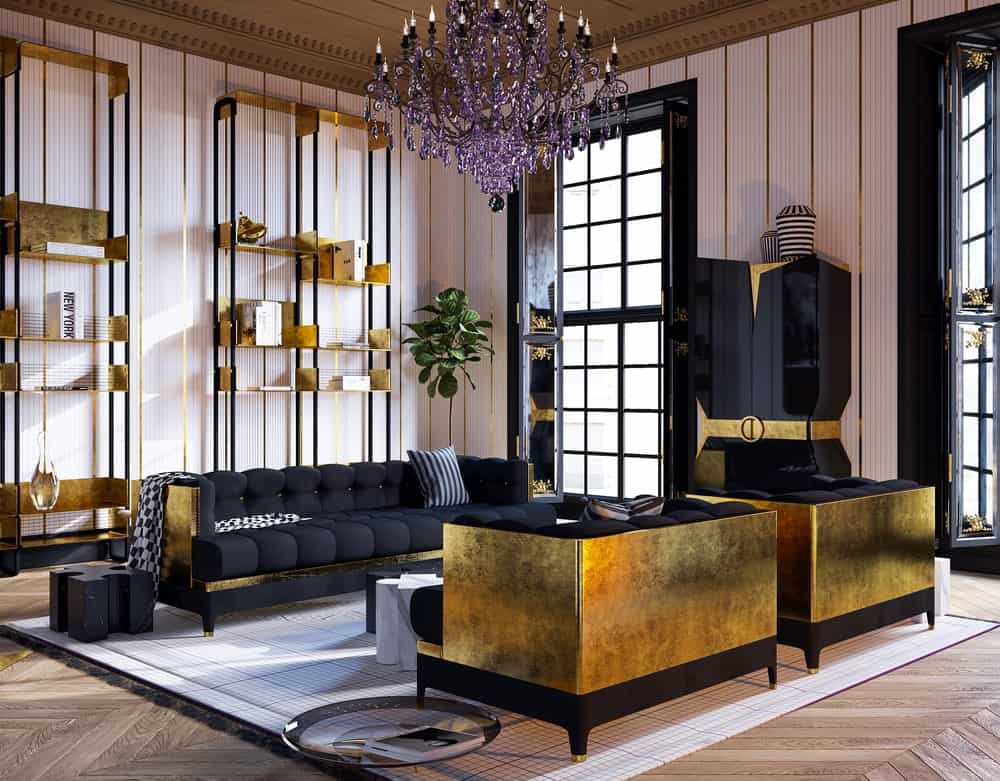 This view shows of a sleek black cabinet with accents of gold to match the sofa set. This cabinet is in the middle of the two tall windows making it stand out against the beige walls. 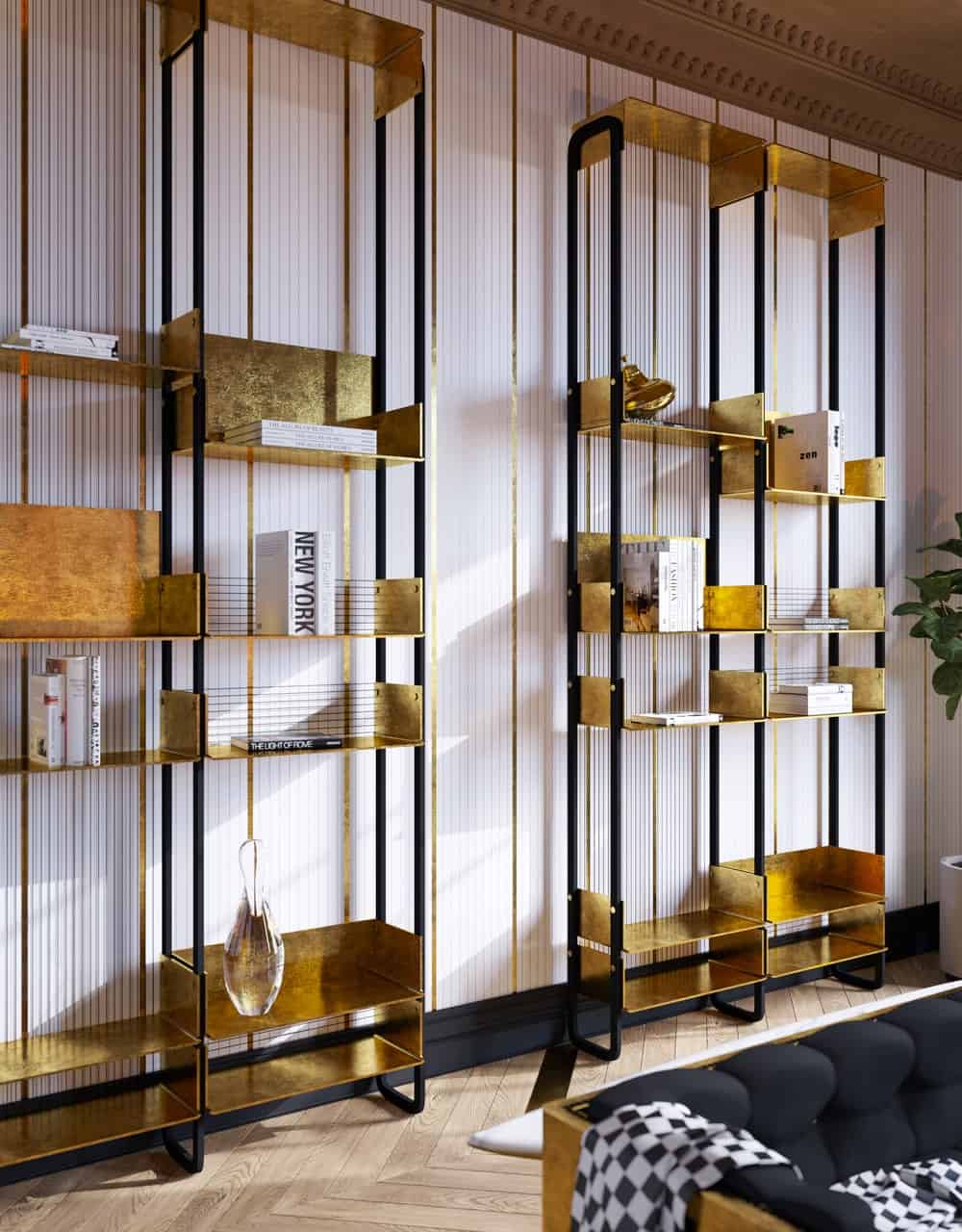 Behind the long gold and black sofa is this couple of modern shelves made of black steel frames and gold shelves to complete the theme of the living room. 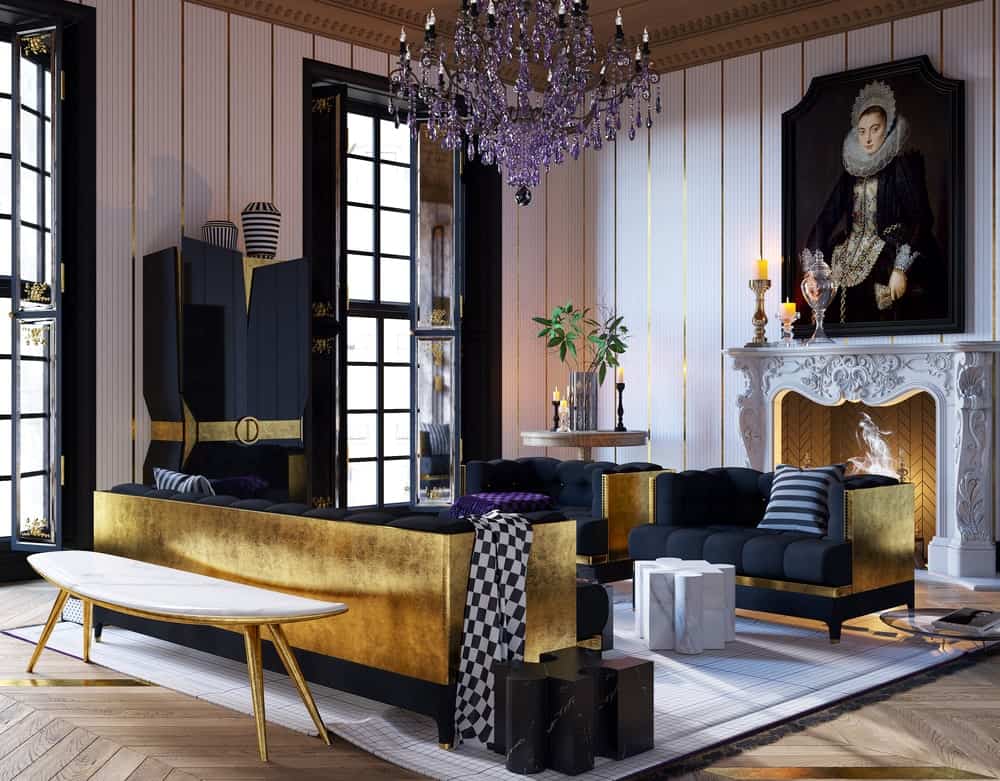 The room is warmed by the Victorian-style fireplace behind the pair of black and gold arm chairs. The fireplace has an elegant design to its white mantle topped with a large painting of a noble woman. 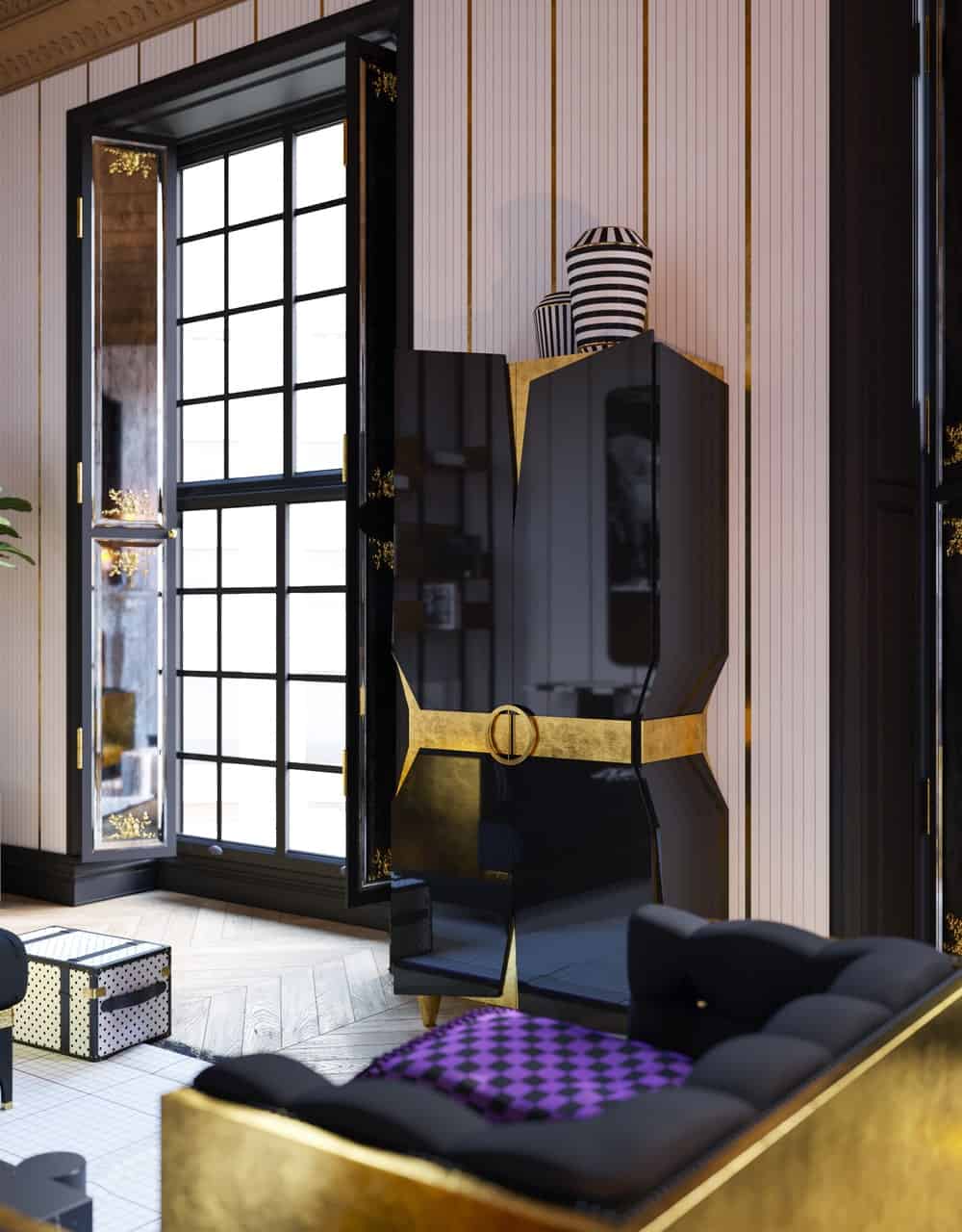 This is a closer look at the black and gold cabinet in the middle of the two tall windows that stands out against the beige walls. These walls are also accented with gold in the form thin striped running vertically. 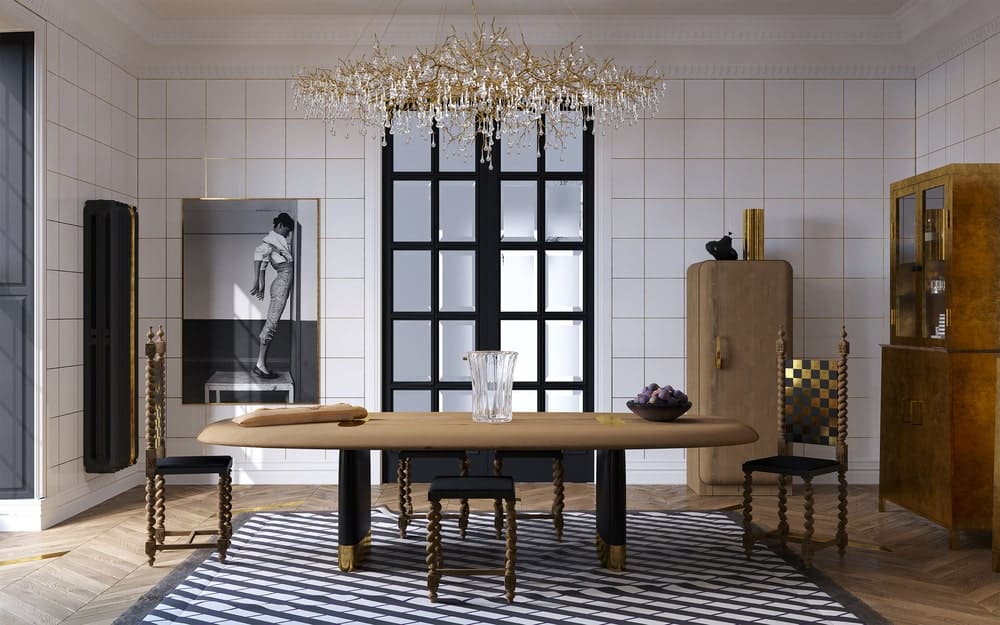 This dining room has a white ceiling that matches with the white walls. These walls are accented with golden details in a checkered pattern. This makes the earthy brown tone of the table stand out complemented by its black legs with gold accents at the base. 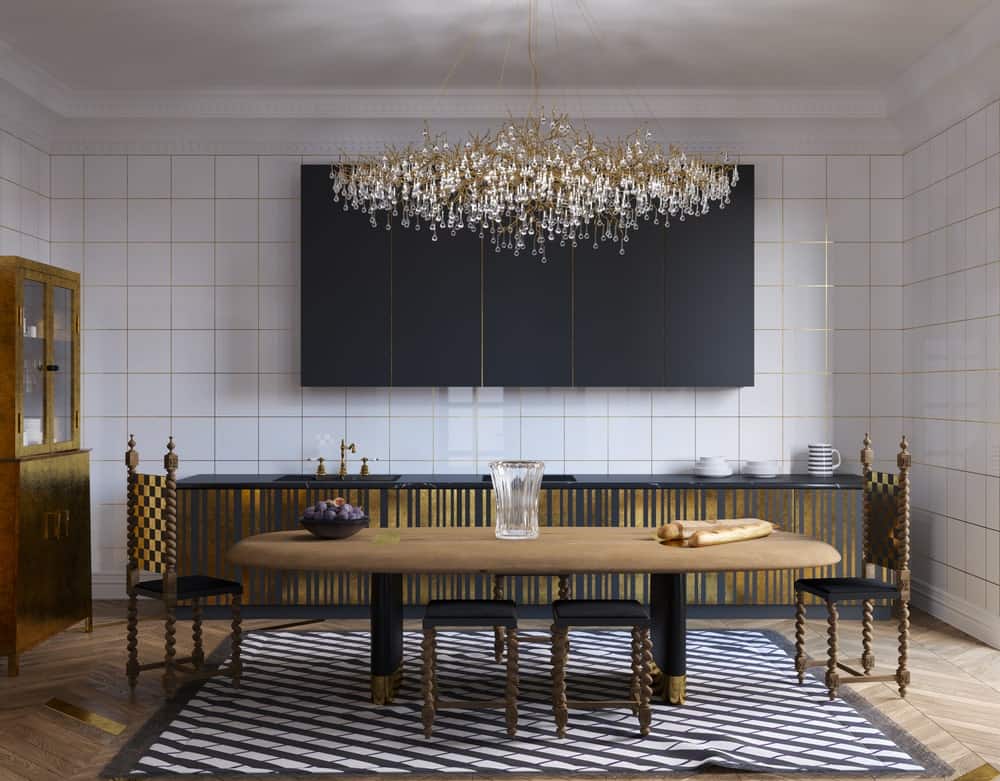 This is the other side of the dining room with the wall lined by a long waist-high black and gold cabinet topped with a black wall-mounted artwork. 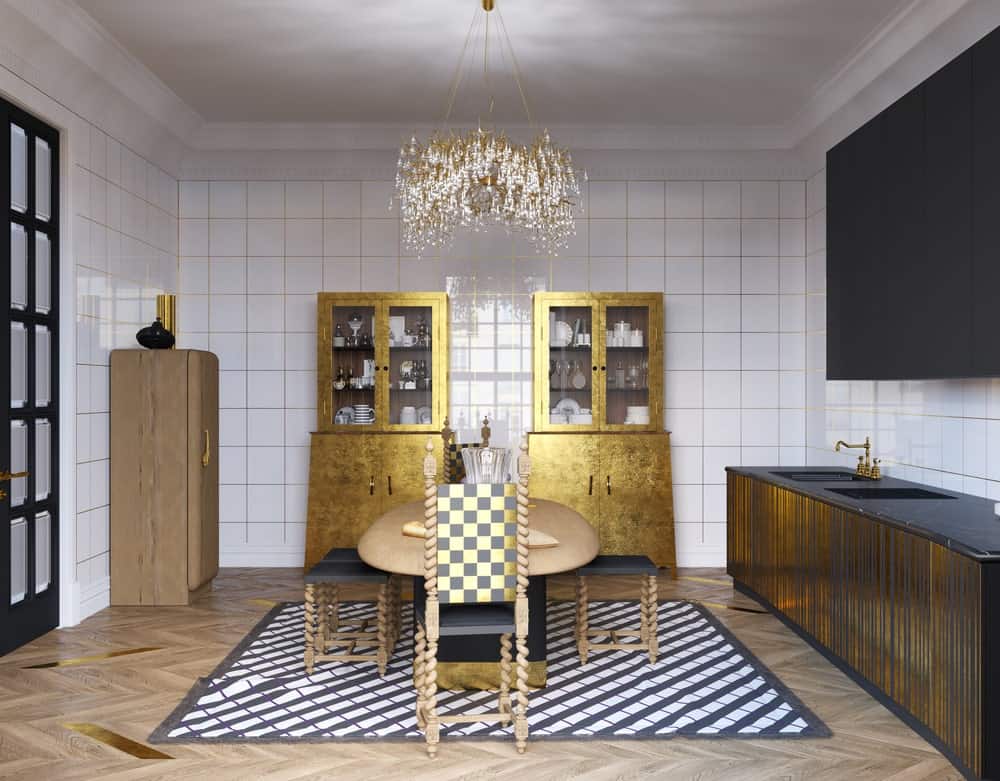 The dining table is paired with dining chairs laced with golden accents that pair quite well with the large decorative chandelier hanging from the white ceiling. This also matches with the pair of golden cabinets by the head of the table. 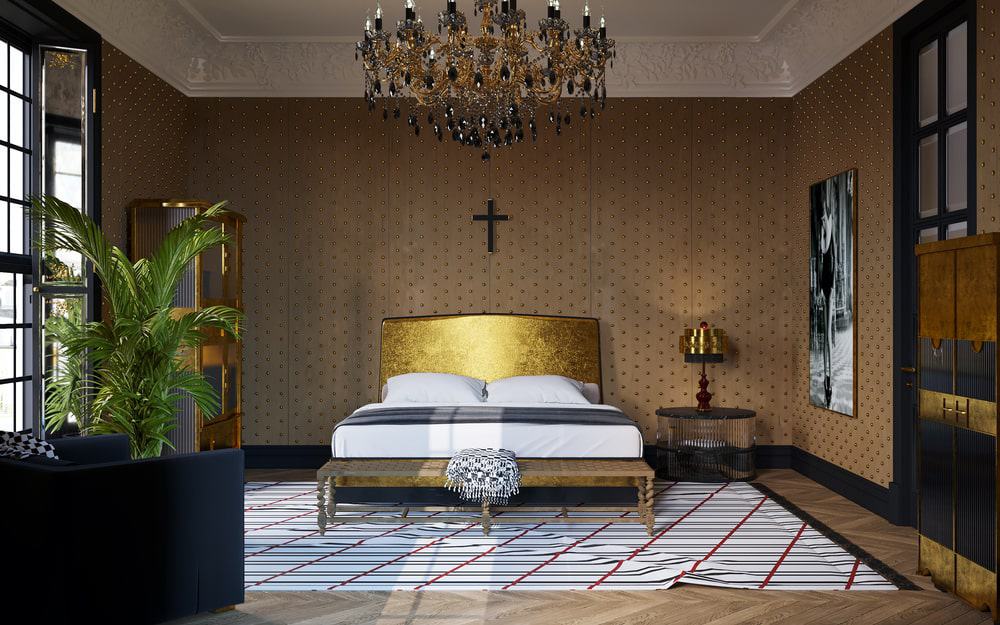 This primary bedroom is dominated by a large bed that has a golden tone to its frame making it stand out against the earthy brown walls adorned with golden studs. 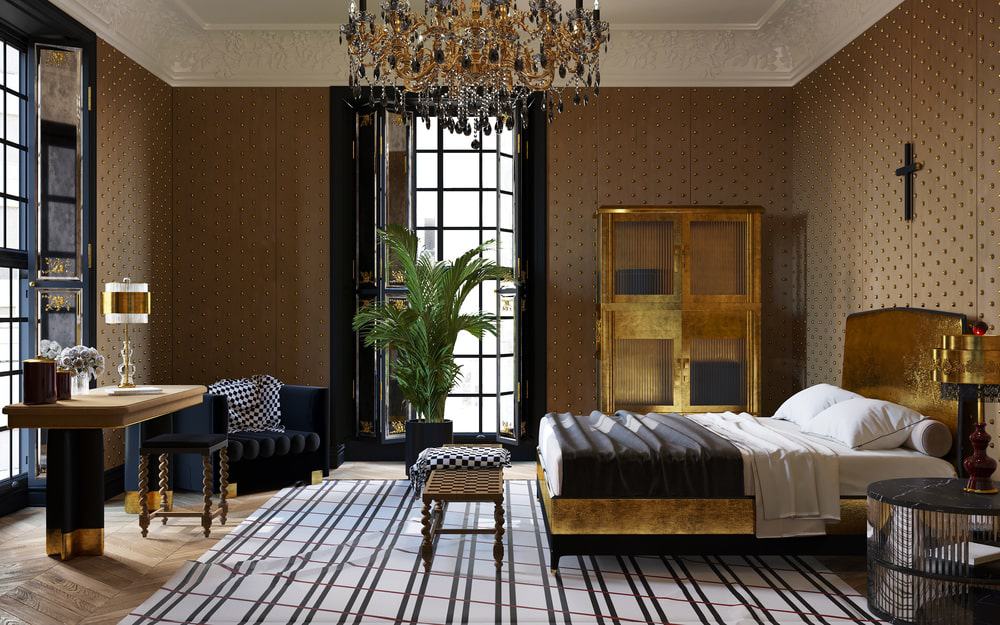 On the right side of the bed is a golden cabinet with opaque panels beside the tall floor-to-ceiling window with folding covers that can be used to control the amount of natural lights coming in. 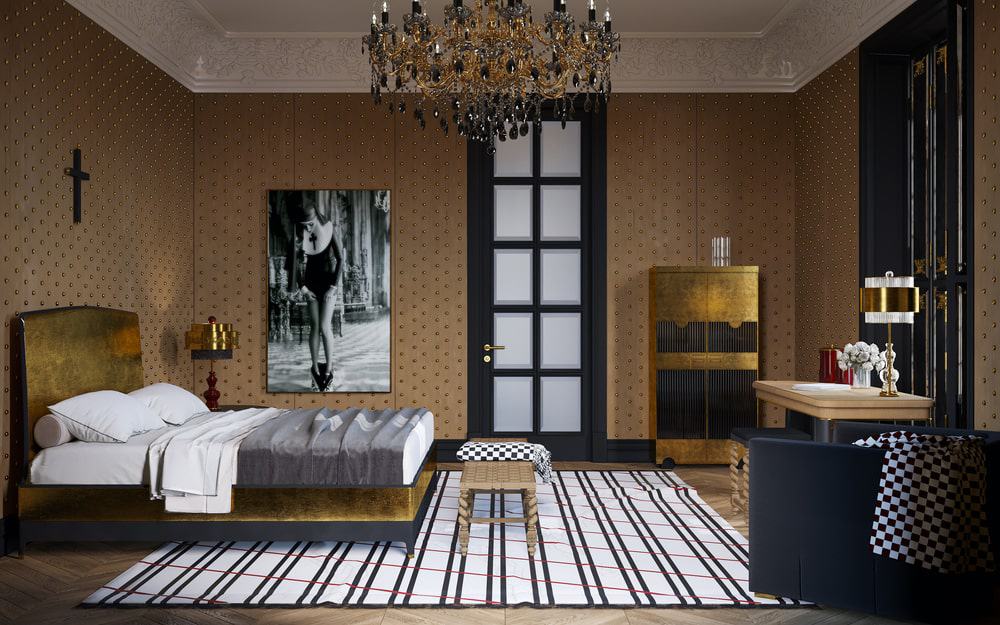 The left wall of the bedroom is adorned with a large black and white photo mounted on the wall beside the tall door that has black frames to match the floor moldings. 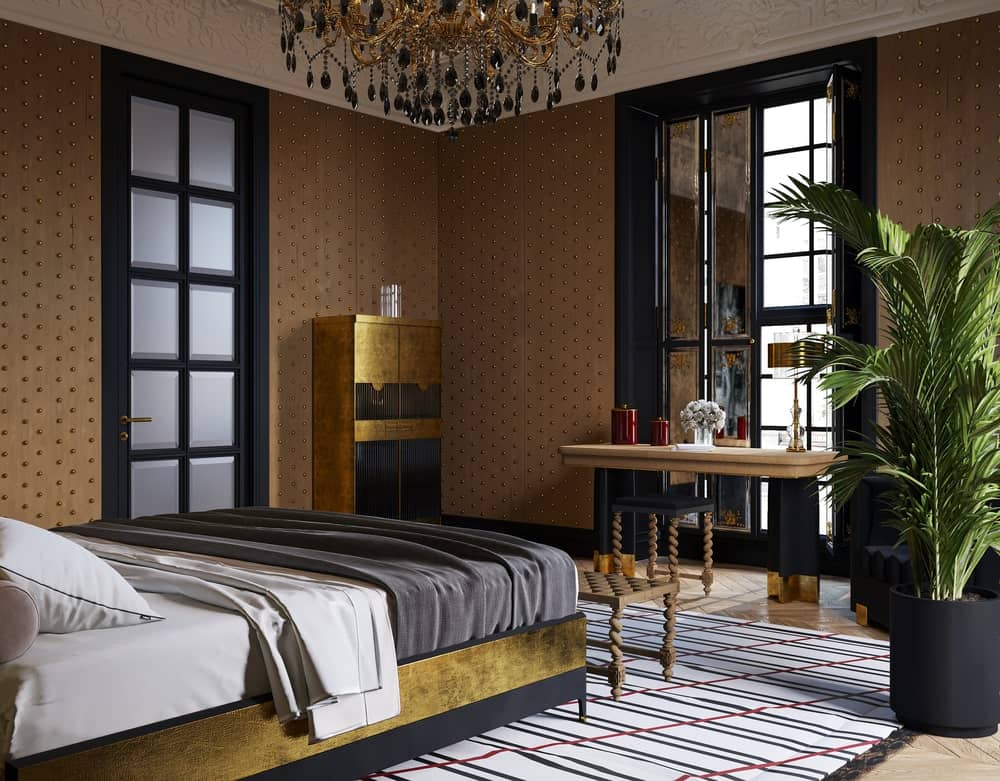 There is also a large window with black frames on the far wall at the foot of the bed. This illuminates a quaint work and study area. 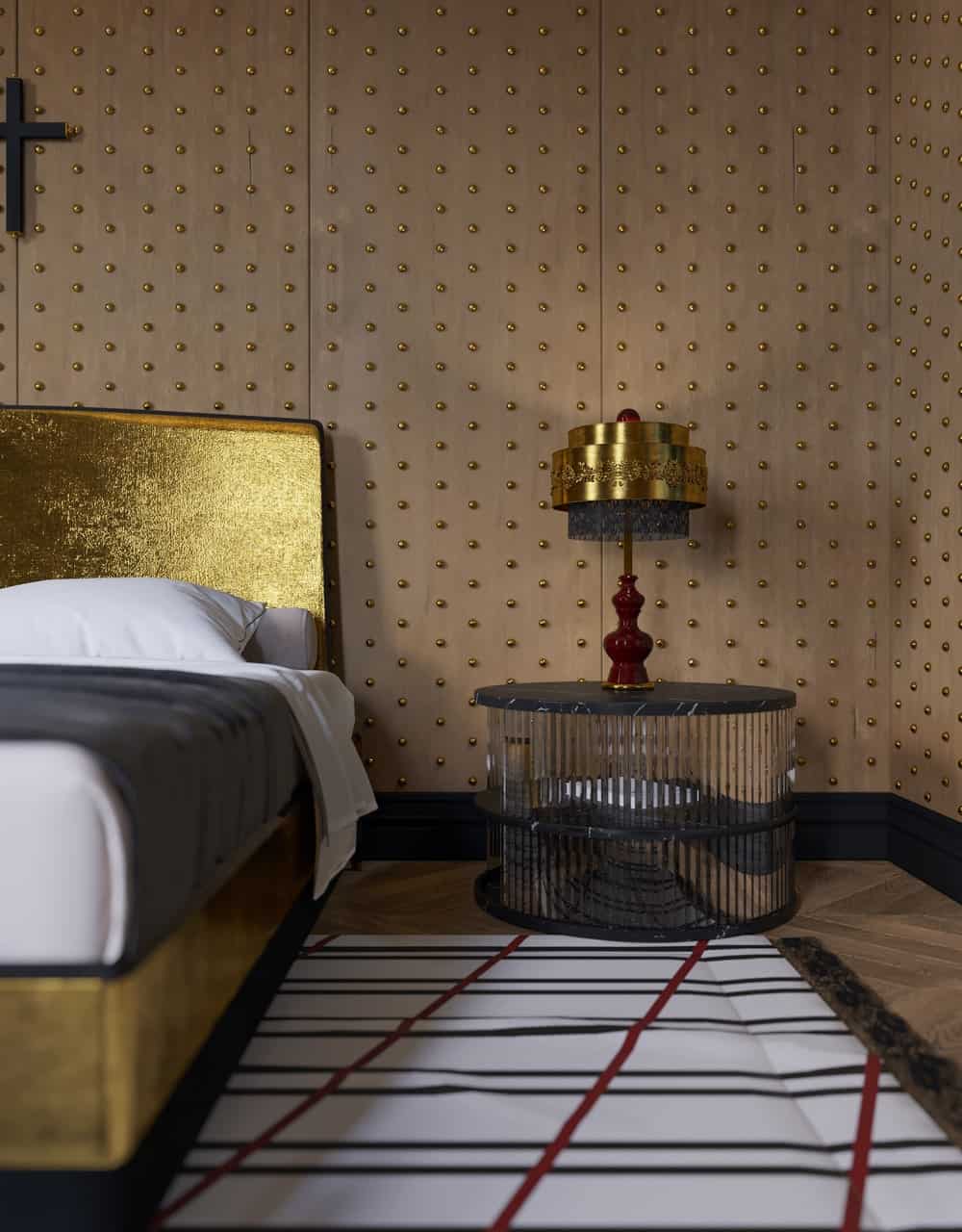 The left side of the golden bed is a circular bedside table with a unique opaque design topped with a decorative golden table lamp. 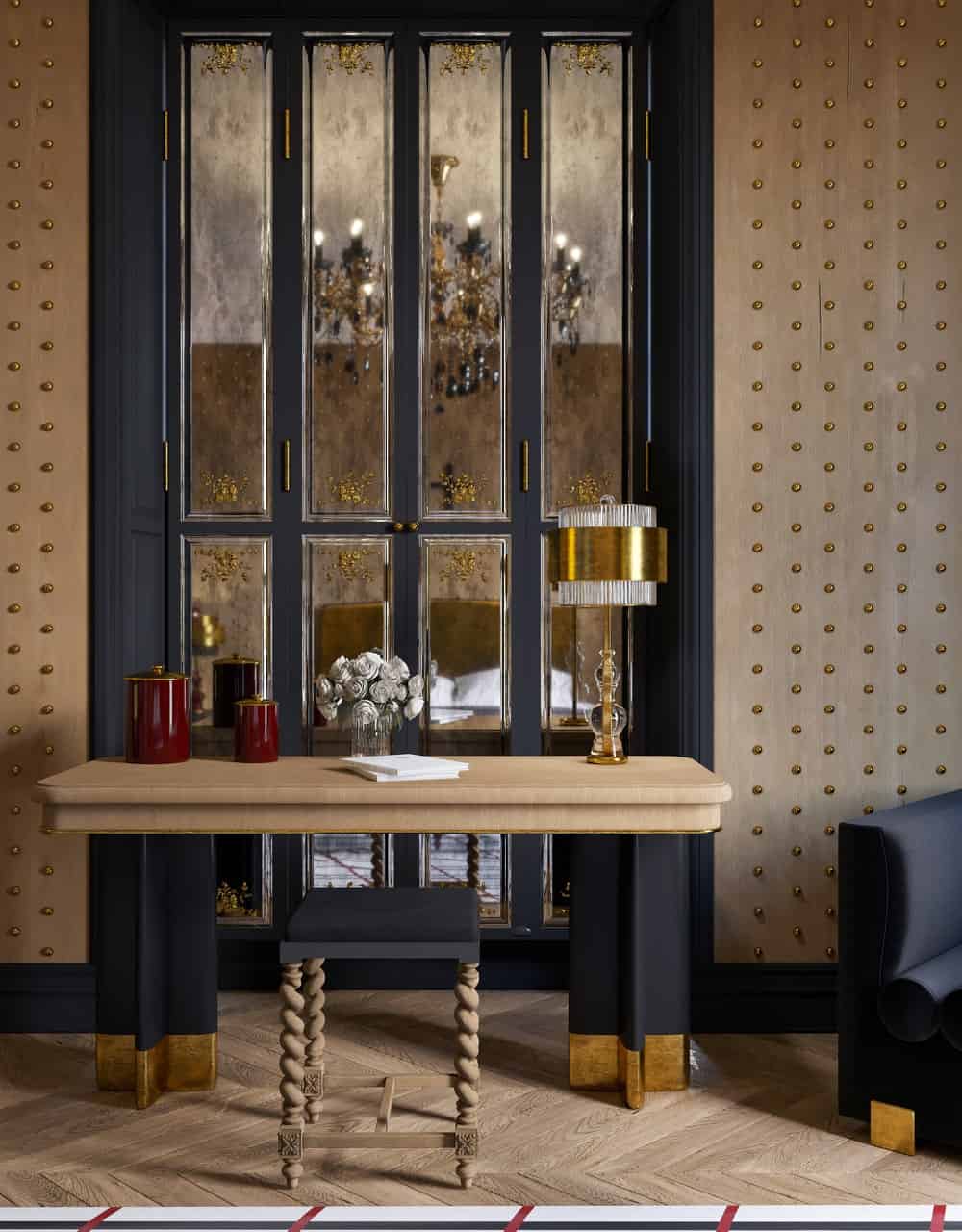 This shows the tall window when the folding covers are drawn. It has mirrored surfaces that reflect the room giving it an illusion of being bigger than it is. 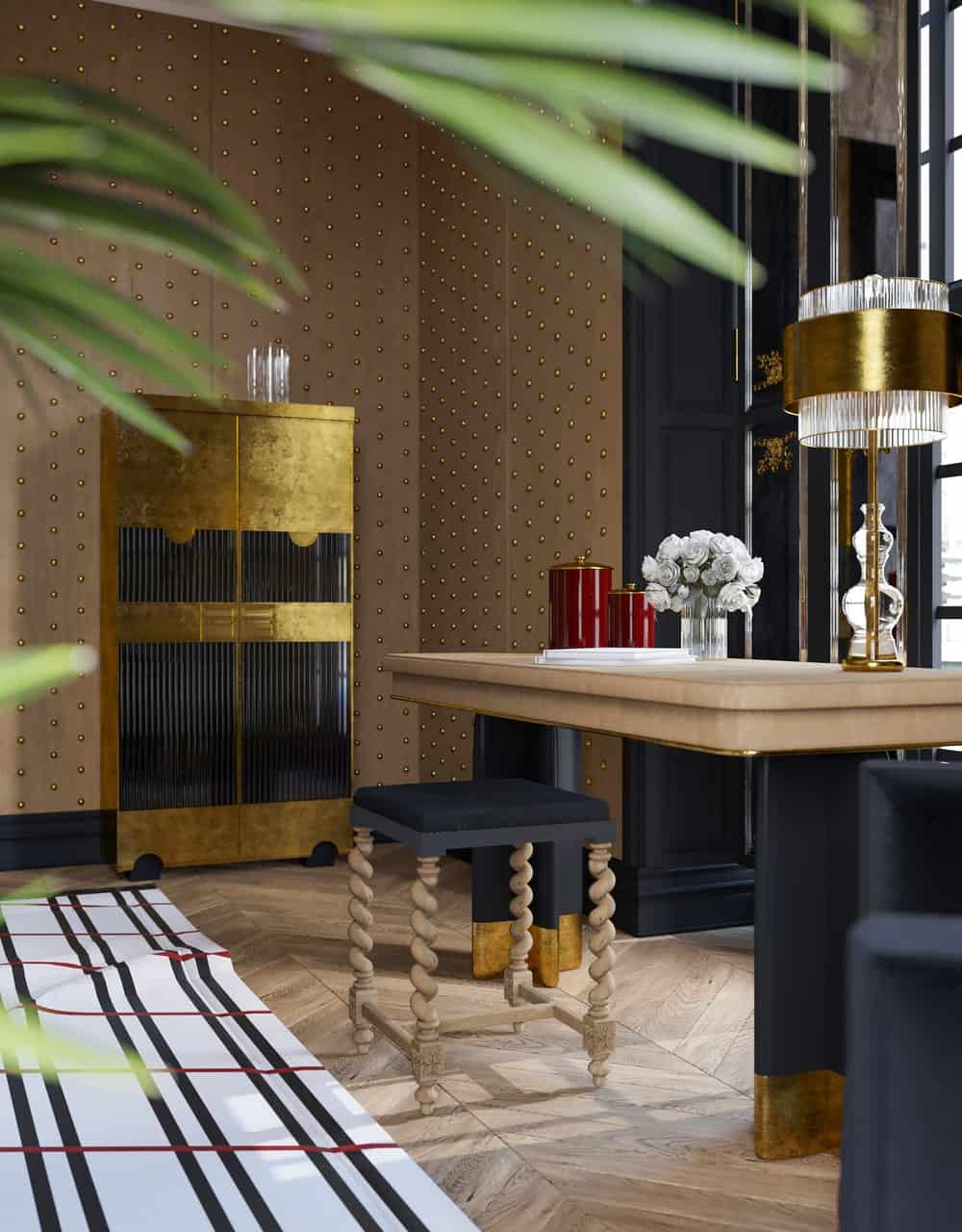 This is a closer look at the work and study area at the foot of the bed. It has a brown top table that has black legs accented with gold at the base. This is paired with a black cushioned stool and beside it is a small black gold cabinet by the corner. 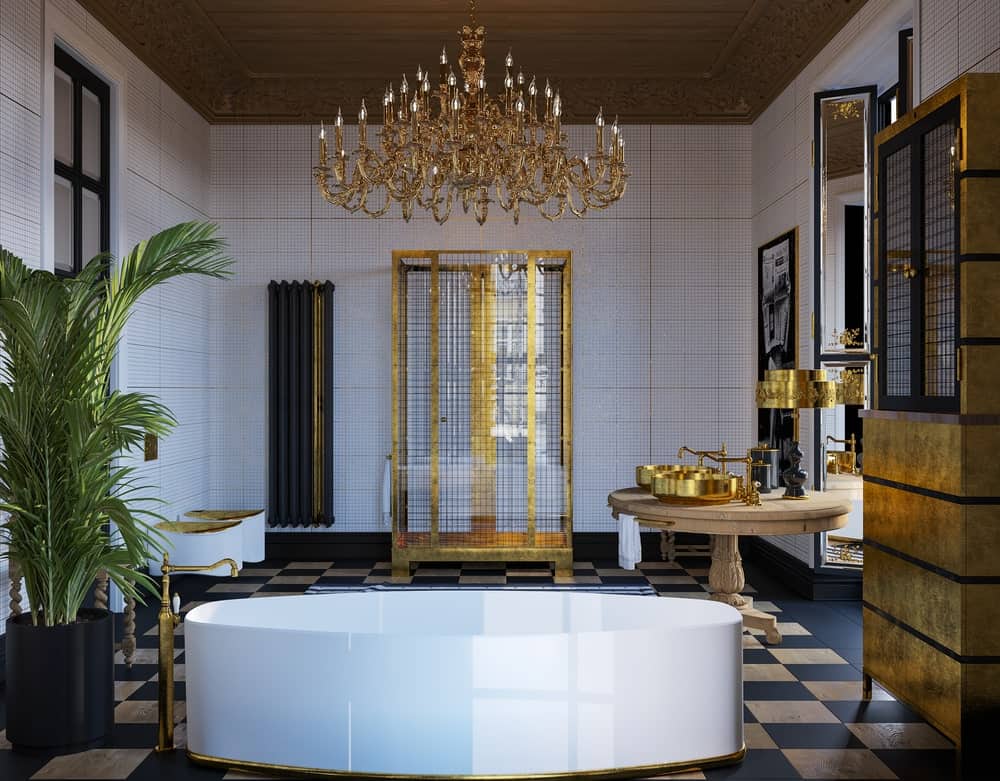 The primary bathroom has a unique eclectic look to it with its elegant white freestanding bathtub that stands out against the checkered black flooring. 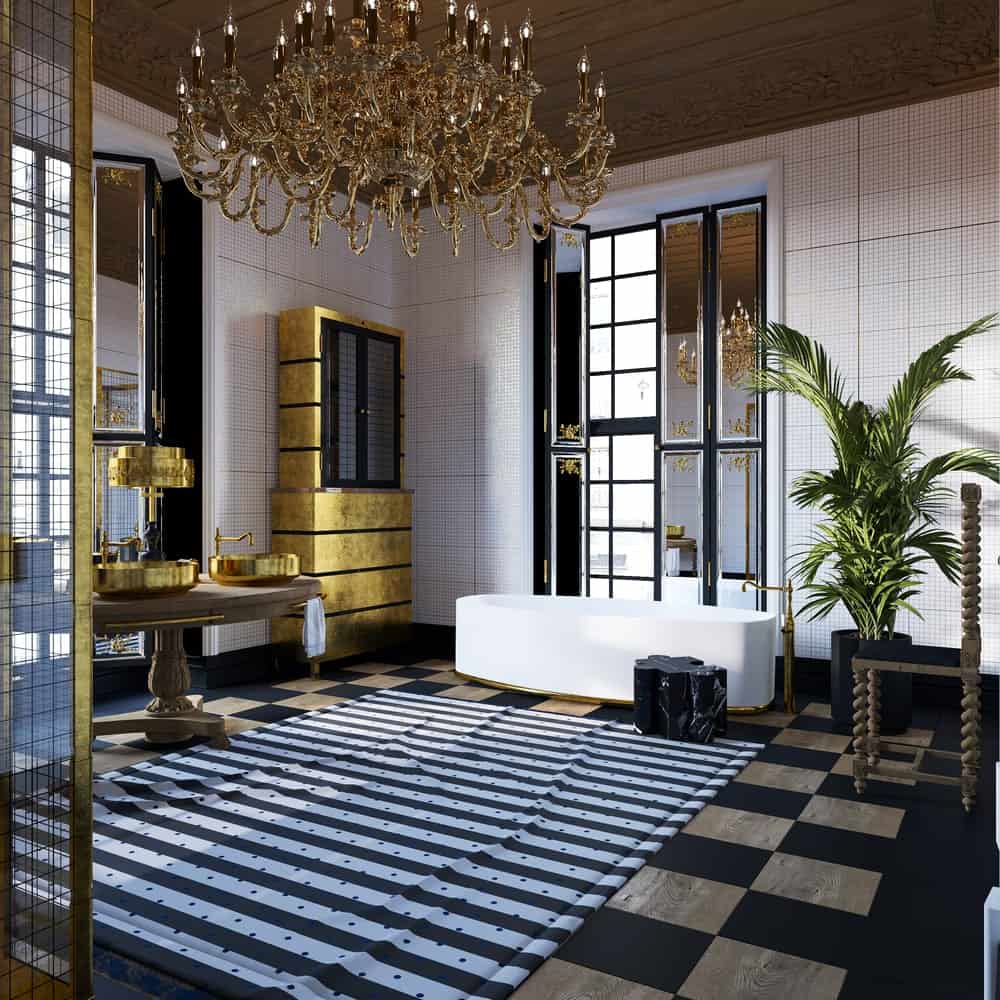 Most of the middle flooring of the bathroom is covered with a large striped area rug that is topped with a large descorative chandelier hanging from the earthy brown ceiling. 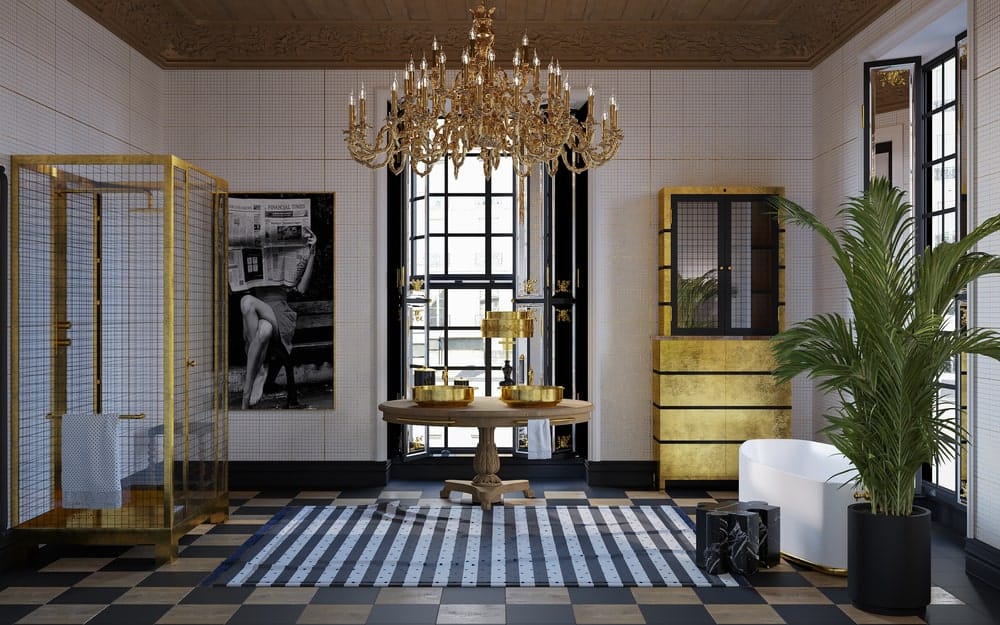 This bathroom has a tall window with the same folding covers as the rest of the house brightening the wooden round table placed by it where golden sinks are placed. 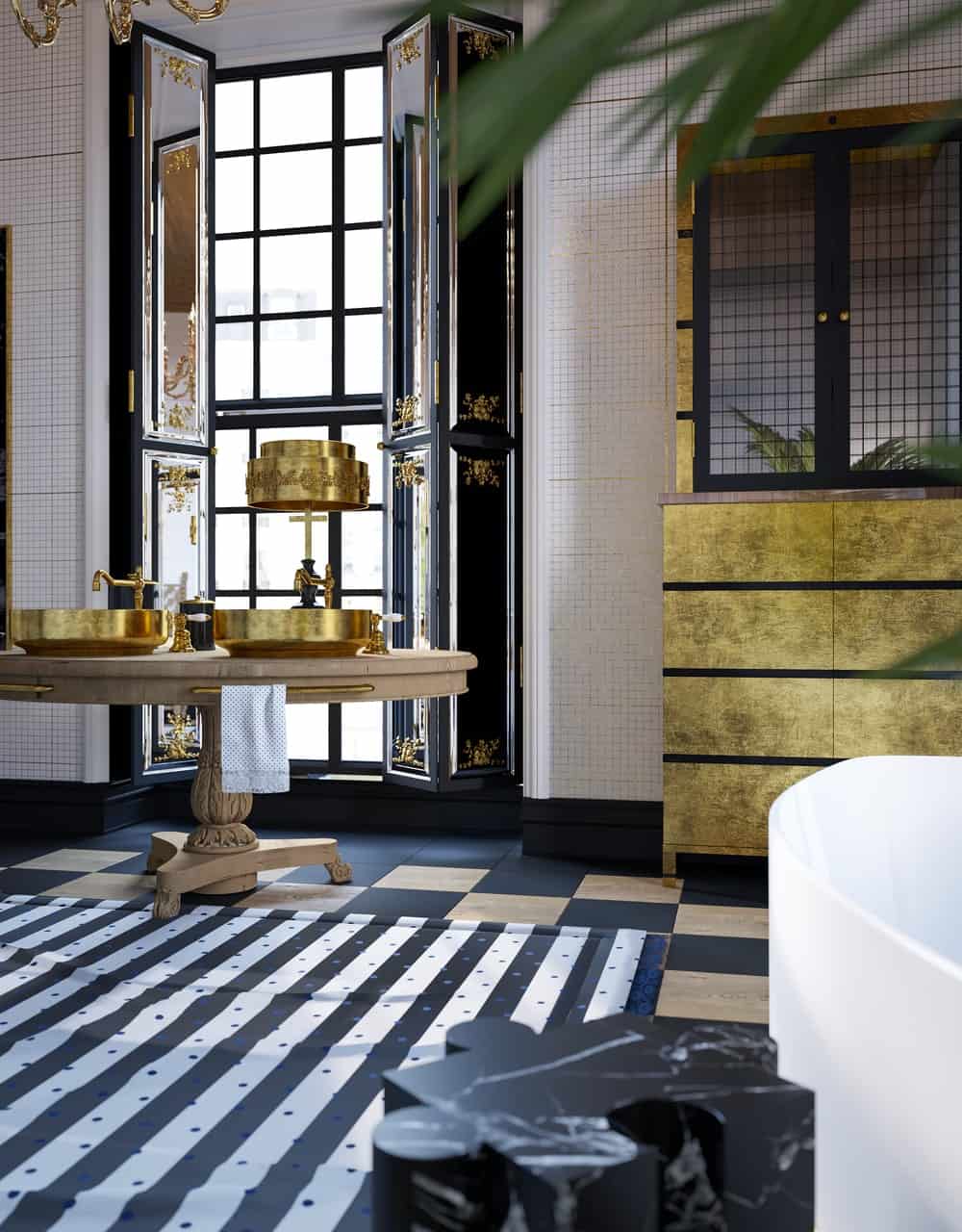 Beside the round wooden table and its golden sinks is a matching golden dresser that stands out against the beige walls illuminated by the abundance of natural lights comingg in from the tall windows. 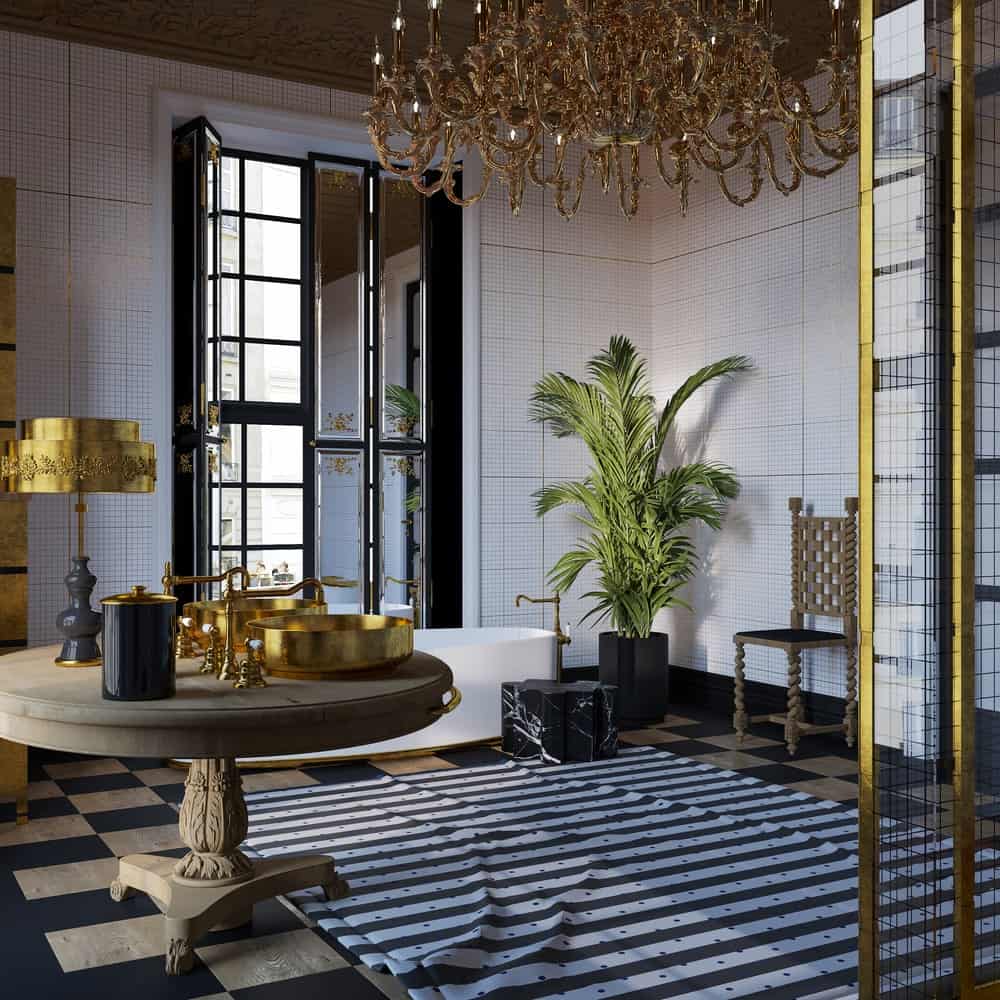 The freestanding bathtub has its own tall window beside it with mirrored covers. This side of the bathroom is also adorned by a potted plant placed on the corner to balance the other elements. 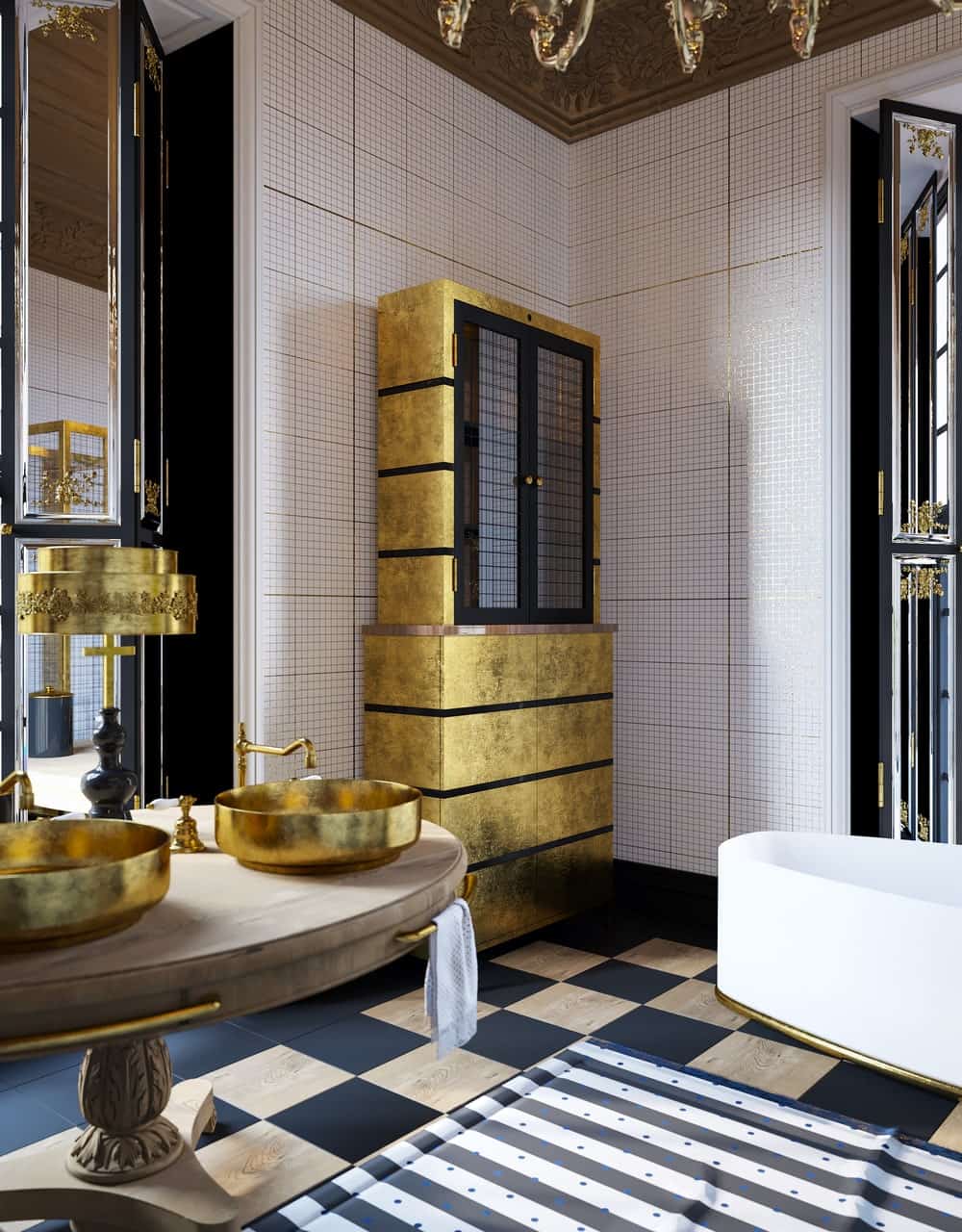 This is a closer view of those unique golden sinks on the round wooden table paired with a golden table lamp in the middle. Here you can also see the textured white tiles of the walls to contrast the black checkered floor and the golden details.

The studio is distinguished by prestigious awards: