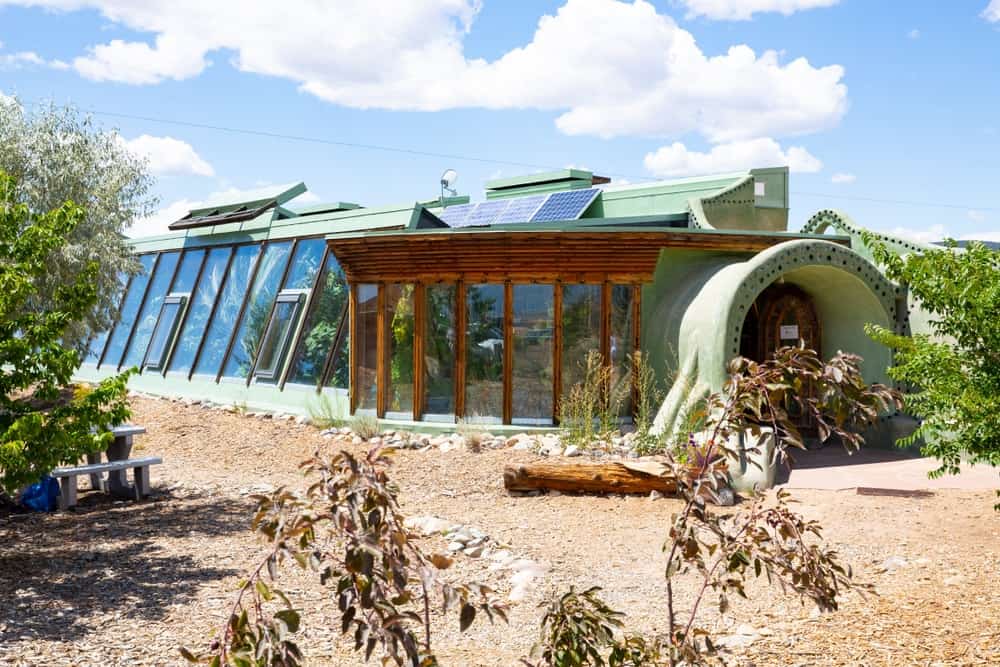 If you’ve ever driven through New Mexico or Arizona, you may have journeyed through neighborhoods that are reminiscent of the planet Tatooine from Star Wars. Not only due to the desolate and striking desert biome, but because of the unique structures that are seemingly built into the landscape.

I myself experienced this when road-tripping from Colorado to Texas and was in absolute awe of the wonky looking homes, the name of which I was already familiar with; Earthships. Each one was entirely unique, with no clear designations for its architectural design.

The Earthship home is growing increasingly popular nowadays, with one’s motive to aid in the healing of the planet. Today we’re going to explore how an Earthship can completely delete your carbon footprint, and how humans living in harmony with the earth will help heal it. (If you’re looking for ways to make our existing home more environmentally responsible, check out this list of Eco-friendly Smart Home Products!)

Table of Contents Show
The Earthship Concept
The Design & Materials of an Earthship
How the Earthship is Sustainable
Thermal Performance
Earth-Packed Tires
South Facing Glass Wall
Ventilation
Solar & Wind Power
Water
Water Harvesting
Grey Water
Black Water
Waste Management
Organic Decay
Packaged Items
In Conclusion…
FAQ
Can you build an Earthship anywhere?
How much does an Earthship cost?
Can you visit the Earthships?

The name “Earthship” is within the same category as a spaceship, or a sailing ship; the vessel must contain absolutely everything required for its inhabitants to survive.

We can thank Mike Reynolds who is the founder of “Earthship Biotecture”, who one day had an epiphany that any object on the planet can and must be properly utilized. Reynolds was based in New Mexico and had always been curious about ways to live sustainably. He wrote his thesis in 1972 titled “The Architectural Record”, and built his own Earthship the following year as a prototype. 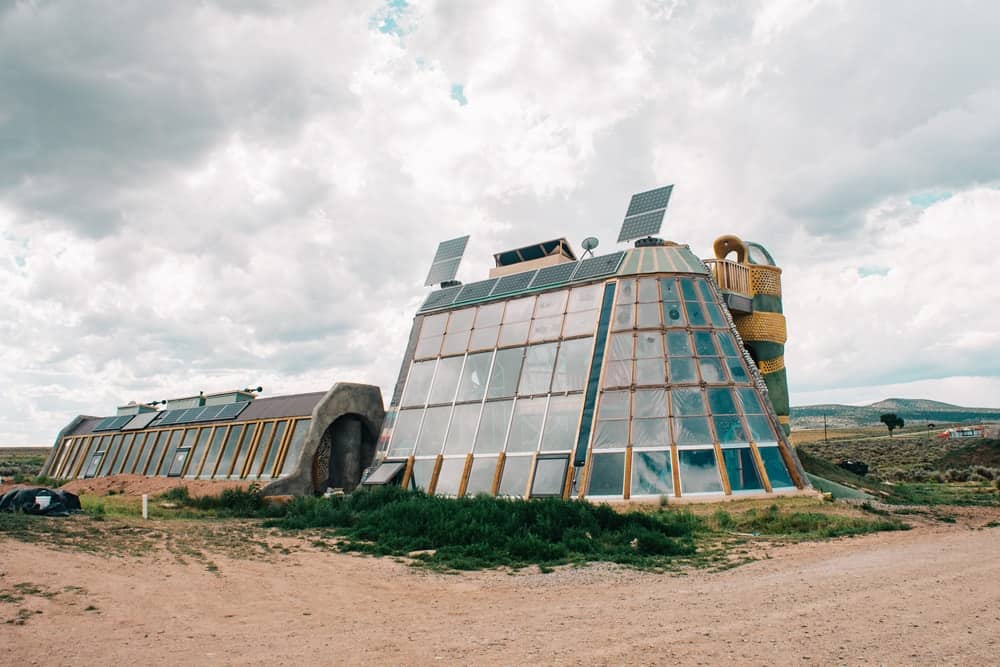 The principle behind Mike Reynolds’ Earthship concept revolves around the six main needs humans require to live comfortable and healthy lives. These are things that all houses are equipped with (except for number 6), but the Earthship is entirely off the grid, meaning it is in no way connected to public utilities. The six human needs are:

In order for an abode to be classified as an Earthship, it must do three things: be created sustainably using materials either harvested from the earth, or materials that have already had a life and need to be reused, it must rely on strictly natural energy (making it independent from the grid), and it must be available to people of all economic backgrounds and constructing skill levels.

The Design & Materials of an Earthship 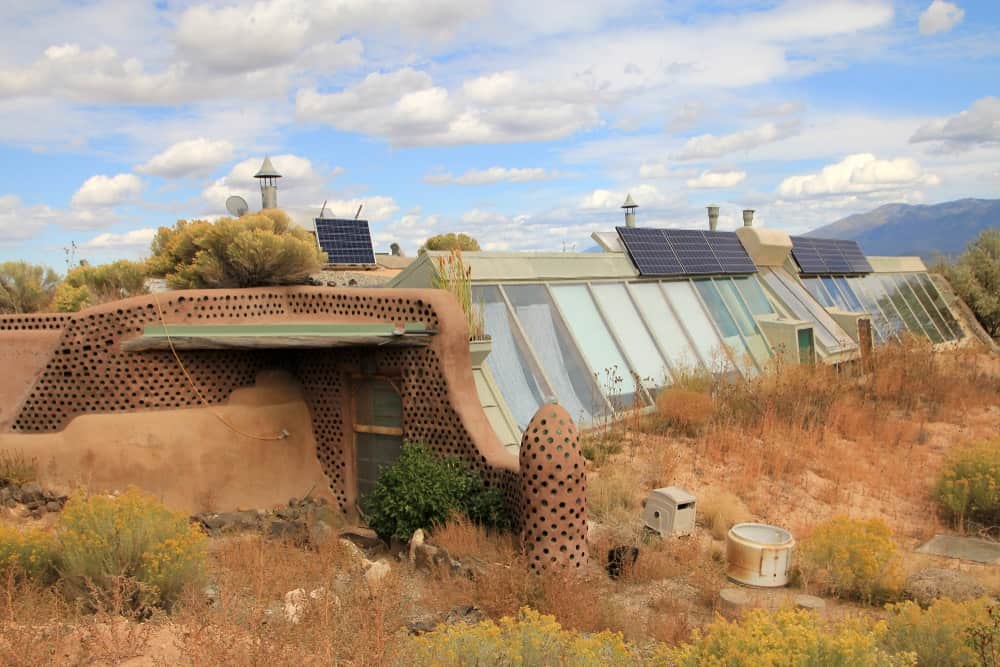 Mike Reynolds’ own Earthship was titled “The Thumb House”, and was constructed from beer cans (that he drank from or cans collected from around town) which were wired together and formed into a type of brick. These were then mortared together and plastered. This ingenious innovation was patented in 1973. His Earthship was made purely from collections of waste he had kept over the years, and from donations of folks in his town.

To build the walls, Earthships are made using old tires that are filled with earth. The earth (soil) is really tightly packed down using a sledgehammer to fill them as much as possible, and then they are stacked like bricks. One completed earth-packed tire comes to be around 300 lbs, and so they’re always made on site.

The choice behind these materials is because they are incredibly weight-bearing, they enable thermal mass as a way to regulate temperature (further explained later), and they are 100% resistant to fire — which is a common issue in dry landscapes like Utah, New Mexico, and Arizona. The tires are formed into a horseshoe shape and molded together using adobe or cement.

The roofs of Earthships are normally made from recycled cans formed into a honeycomb design, further reinforced with stucco or concrete. The roof is not load-bearing but tends to be another well-insulated feature.

These are the main components that will enable a well-functioning, sustainable home. But the whole point of Earthships is that they are designed by the owner, and can be suited to any desire they have. The architectural design can be incredibly experimental, and it is rare to find any two Earthships that look anything alike.

How the Earthship is Sustainable 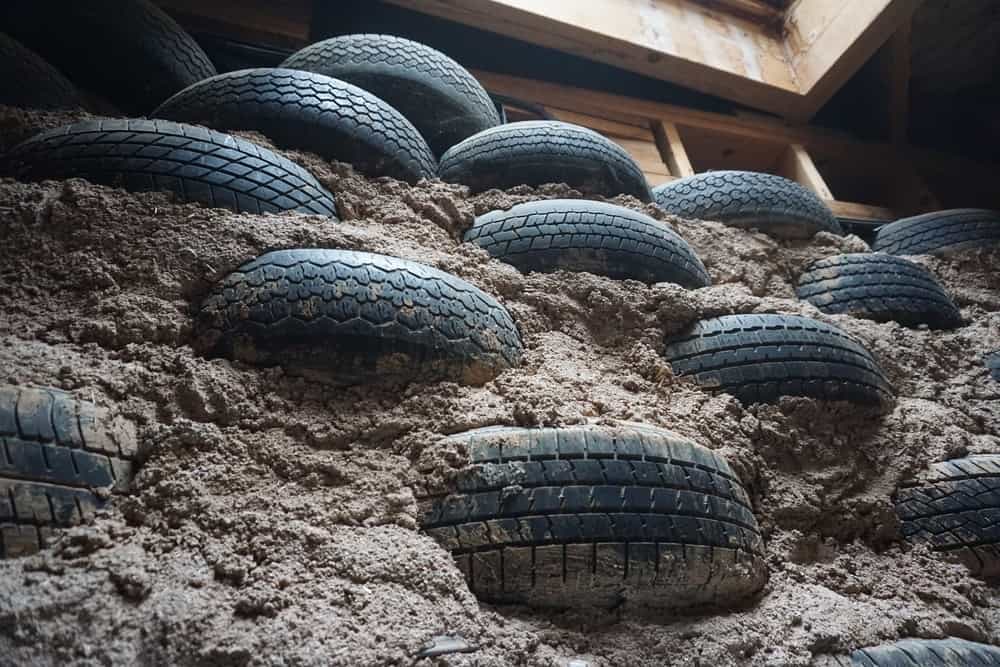 One important feature of the Earthship design is that the structure is often sunken into the earth, making it appear as though it is almost an organically grown entity. The benefit of being sunken in is that the subsoil is a natural way of storing heat.

Note: this is most successful in areas that have no less than 80 frost mornings per year. Earthships in Canada require a more complex design to achieve comfortable living temperatures. 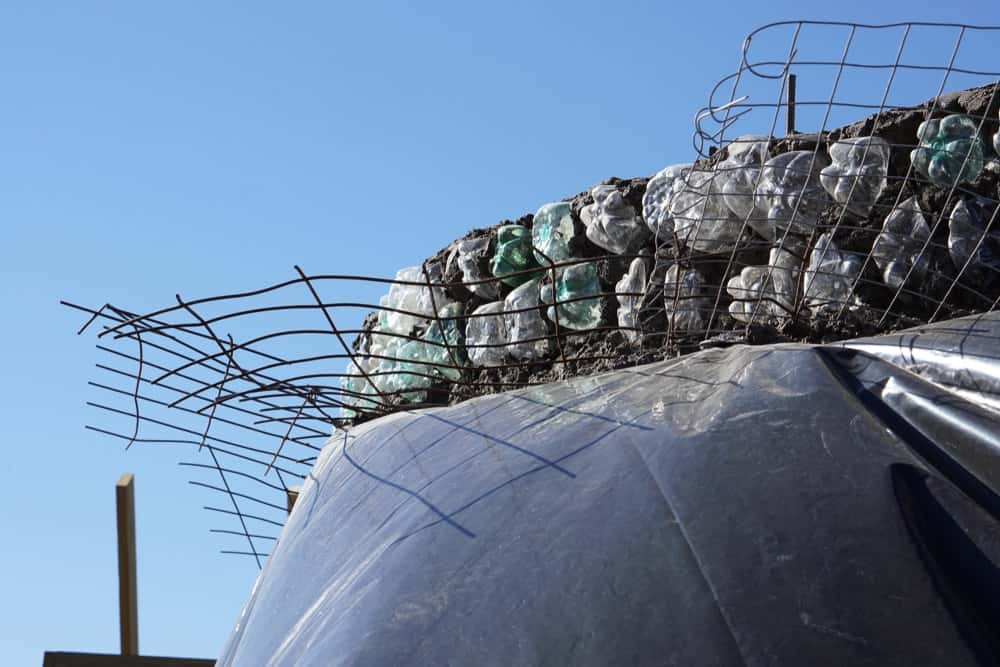 Earthship design always incorporates a principal wall made of glass sheets (to enable sunlight to enter). Geospatial design determines the proper angle to face this wall for the longest sun exposure according to the seasons.

This is usually facing the equator; the angle is perpendicular to the light from the winter sun, allowing maximum exposure when the heat is most needed, and less solar exposure in the summer, when the interior of the may want to be cooler.

Behind this enormous south-facing window, is where the greenhouse will live. If properly insulated, one could potentially grow tomatoes all year long (when their outdoor growing season is incredibly short). Oftentimes folks will have a kind of hallway between the greenhouse area and the rest of the home. This narrow barrier allows for a more regulated temperature in the living area. 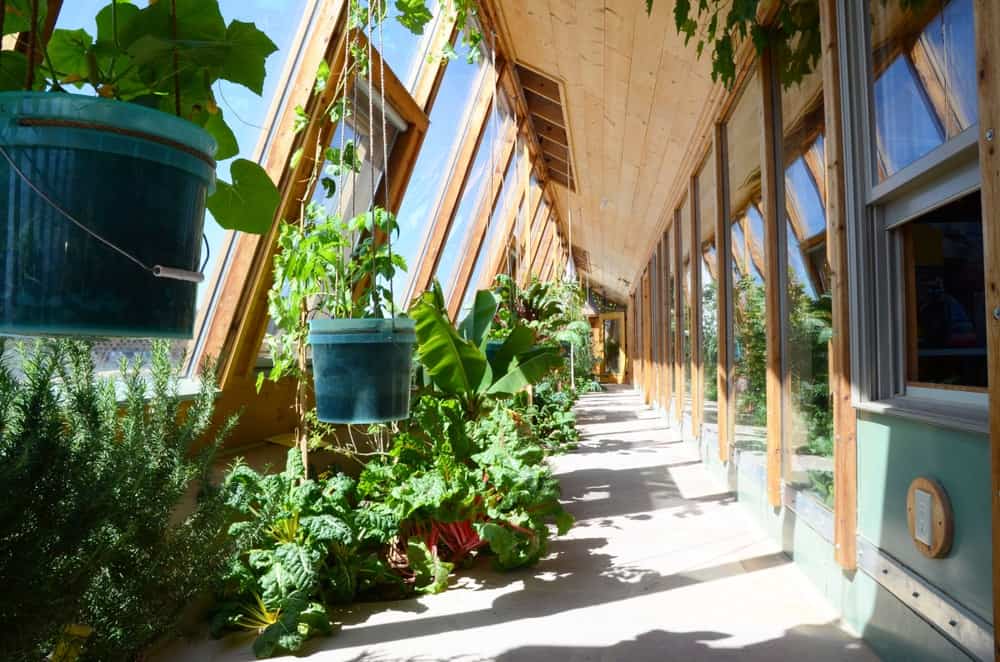 To prevent the interior from getting too hot in the summer, a very long pipe will extend from the exterior berm of the house (protective hill) through the comfort zone. Convection means that hot air rises, and by the time the air reaches the end of the pipe and through the small vented window in the greenhouse, the hottest air will circulate outside instead of into the house. 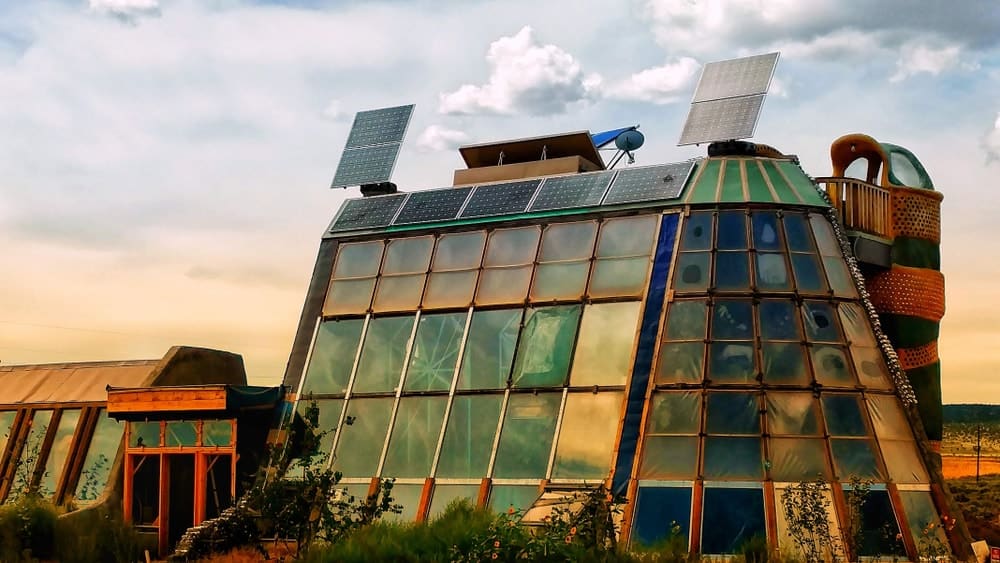 The earth provides all of the energy we really need. With an adequate amount of solar panels or wind turbines, they are capable of powering an entire town. Renewable energy is the most affordable, and the best for the planet. It’s truly a no brainer, and incredibly confusing as to why these systems are not more popularized.

Energy harvested from wind force and solar power is directed into a DC (direct current) generator which is stored in deep cycle batteries. In order to properly direct this stored energy, Earthships use something called a Power Organizing Module (POM). This module includes things like circuit breakers and converters, which is what makes powering kitchen appliances, lighting, vacuums, computers; all possible.

This energy is never used for heating or cooling, as the structure itself is designed to regulate its own temperature. That’s the beauty of renewable energy, after the initial cost of turbines or solar panels, it’s entirely free. 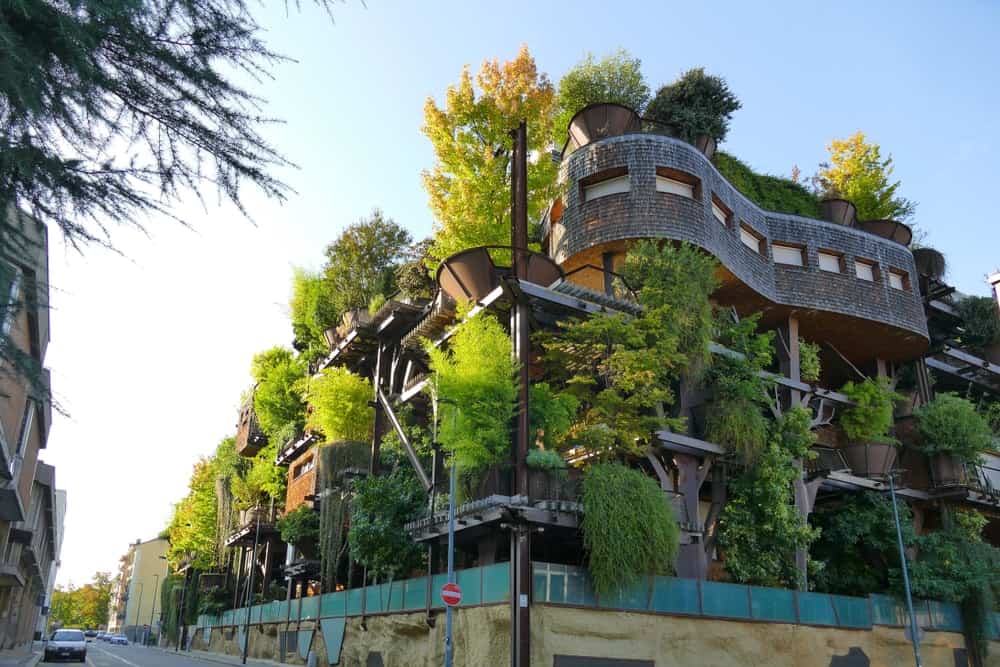 Every drop of water used within an Earthship is harvested from condensation, snow, and rain.  A water catching system is implemented on the roof of the structure. It collects rainwater, and flows through a silt catching device, into a Water Organization Module (WOM).

This module filters out contaminants and bacteria making it safe for any household use. The water is then flowed through a pressure tank to create the common water pressure found in regular households.

The amount of water wasted within a regular household is truly baffling, considering how much effort goes into getting that potable water into your home. Earthships are very conscious of this water waste, and so something called greywater is dedicated to the water that cleans out the toilet when it flushes.

Greywater is unsuitable for drinking since it has already been used once within the household. When water drains down the shower or sink drain, it flows its a separate digester — this is a rubber-lined botanical cell. Bacteria that exist inside these plants oxygenate the greywater to reduce its nutrient load. Once it seeps through the botanical cell, it’s then directed through a peat-moss filter and collects in a reservoir.

When the toilet is flushed, it grabs the water from this reservoir. Greywater is basically reclaimed water. It’s almost like getting a second life out of a single-use plastic bottle. It’s still a bottle, no reason for it to only have one life.

If reusing water once wasn’t already impressive, Earthships also come equipped for black water. This is the water that has been used by the toilet flush, so greywater turning into black water. This water is fed into something called an anaerobic digester.

This is a septic tank that is vacuum-sealed. Organic matter is broken down by bacteria, but since there is no oxygen in the tank, the chemical breakdown turns into biogas. And do you know what we do with gas? We turn it into energy.

You’re basically turning your poop into what powers your lightbulbs. 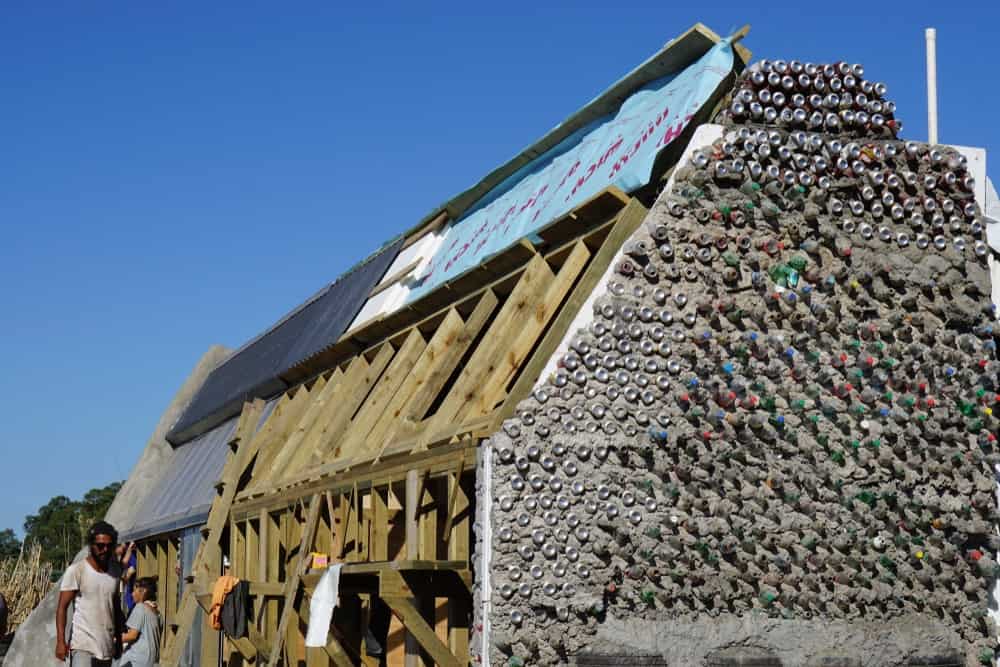 Since the anaerobic digester is still in your mind, let’s further explore why this mechanism is so incredible. So we’ve already established that whatever you flush down your toilet can be turned into energy. Lots of Earthships come equipped with garb-orators built into their sink drains, which will then lead into the anaerobic digester.

Any organic matter can be digested, and subsequently turned into energy. This way if a volcano erupts and blocks out the sun’s UV rays, you can still take a poop and that’ll allow you to turn on your tv.

The anaerobic digester also gives one the option to flow some of that waste into the greenhouse soil. Bacteria breaking down organic matter is what allows for an incredibly nutrient-rich soil. This process is basically the same concept as covering a field with manure as fertilizer.

We are all human at the end of the day, and may not necessarily have the time to make our own beer or wine or soda. It would be foolish to simply send away these colorful bottles to be recycled by someone else.

Once you already live in an entire recycled home, the creativity that comes with these surroundings is boundless. Looking for a small addition to your home? You can build an entire mosaic wall made from recycled bottles. Designing them into whatever pattern or shape you want and surrounding them with adobe clay, the mosaic turns into a colorful series of tiny windows.

There and boundless DIY projects that can utilize garbage. Got a lot of plastic bags? Twist them around until it creates a kind of yarn and weaves it into a front doormat. Don’t know what to do with glass jars once filled with pasta sauce or soap? Turn it into a wind chime. 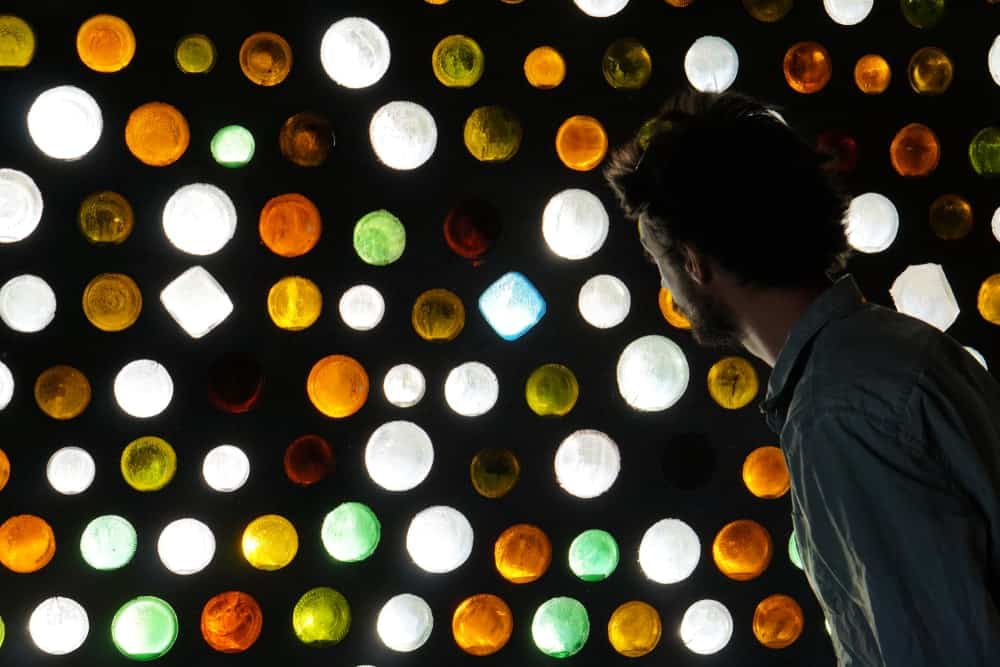 Nothing ever needs to go to waste. You just have to put a little creativity into it.

Can you build an Earthship anywhere?

Technically yes. They were first established in states like Arizona and New Mexico, where the climate is ideal for its type of energy harvesting (very sunny), but next iterations of Earthships are being made so that they can be successful in almost any climate. (I once heard of a man in northern Alberta who was able to harvest tomatoes in January. Have you ever experienced a Canadian winter? It’s horrendous.)

How much does an Earthship cost?

There is really no set cost for Earthship construction. If you’ve been collecting bottles and tires for the past few years, you’re pretty much already halfway there. There are companies on hire who will design an Earthship for you, like these amazing folks: Earthship Global

Can you visit the Earthships?

If you’re around Taos, New Mexico, Earthship Biotecture allows for the touring of an Earthship!