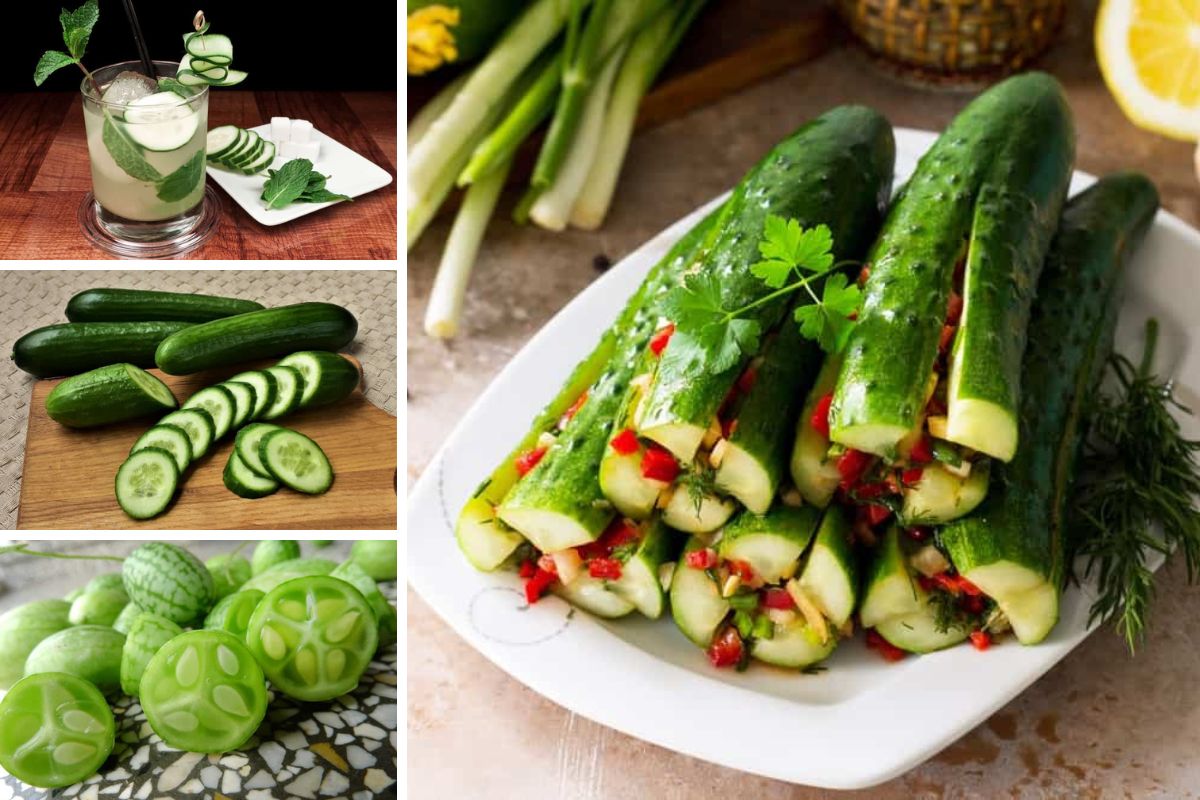 Cucumber is a flowering annual plant that belongs to the pumpkin family. It originated from South Asia and was first cultivated 3,000 years ago in India.

Just like we do today, ancient Egyptians and Romans were also fond of cucumbers and often included the vegetable in their diet. Aside from consuming it, the Romans also used cucumber for treating scorpion bites and bad eyesight. 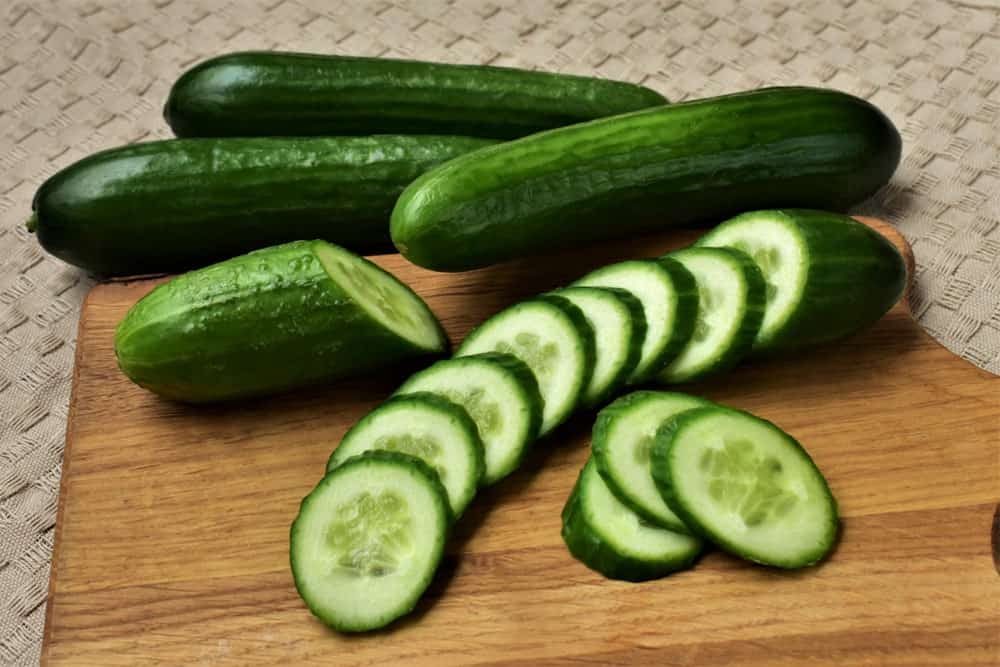 Today, China is the leading producer of cucumbers in the world with 40 million tons produced annually or 60 percent of total global consumption. 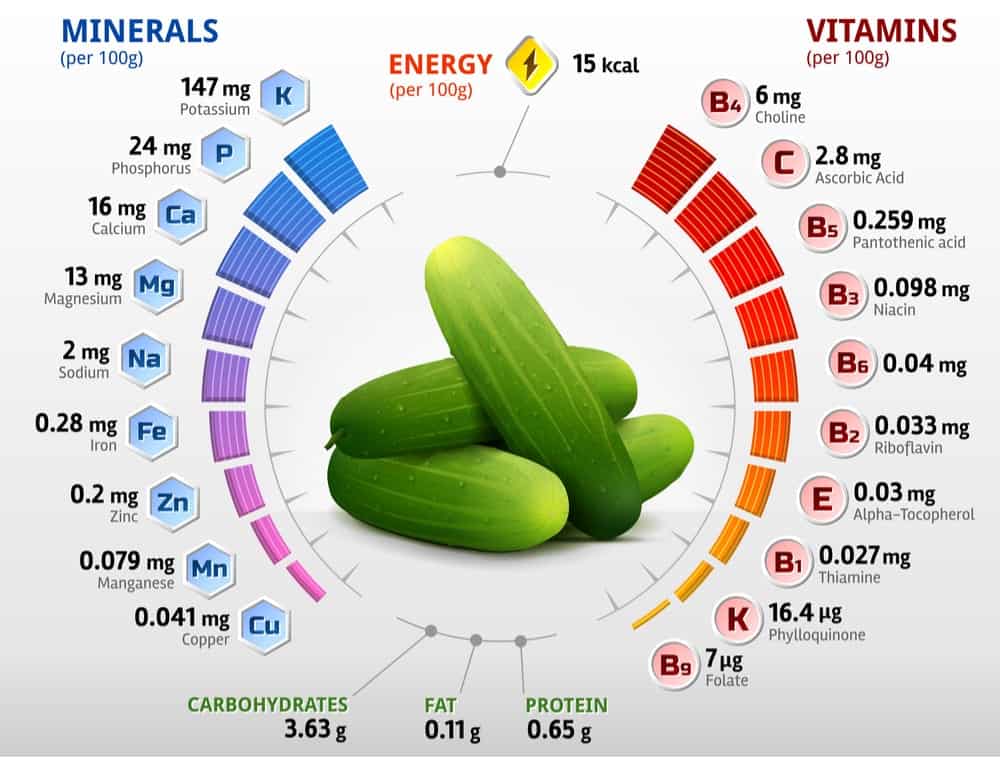 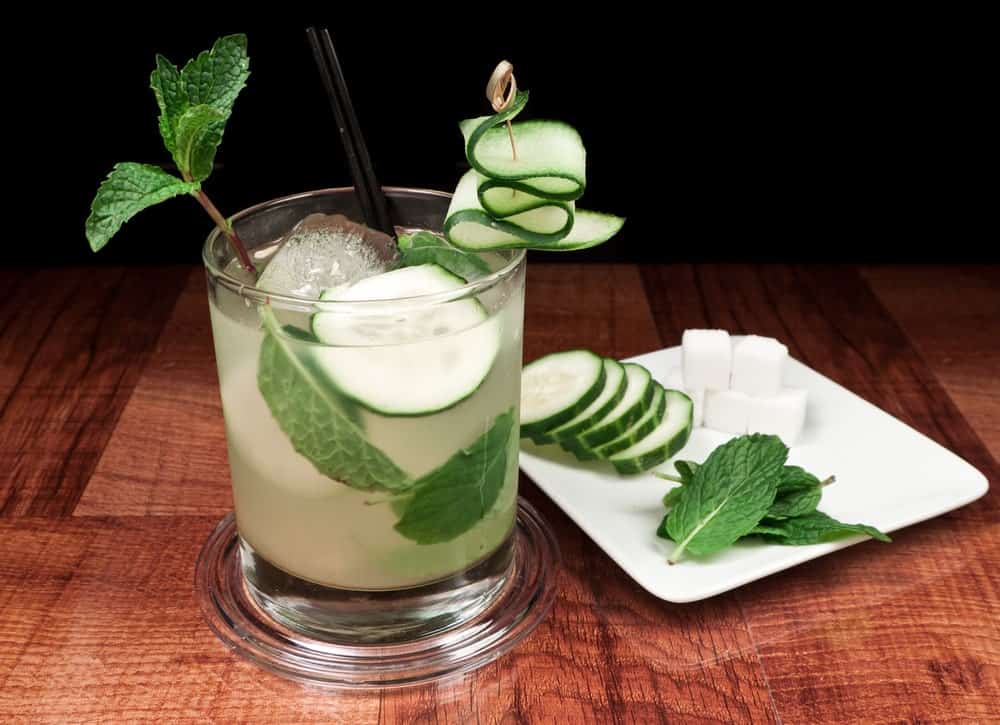 Also called snack cucumbers, cocktail cucumbers are small and have thin skins. Not everyone recognizes this as an official type of cucumber but they are fun to eat because you can devour them in just a few bites. Cocktail cucumbers are good for a quick snack, as a garnishment for your favorite martini, and as a lunch box item. They are petite, crunchy, and delicious and most of them are a vibrant shade of green and seedless as well. 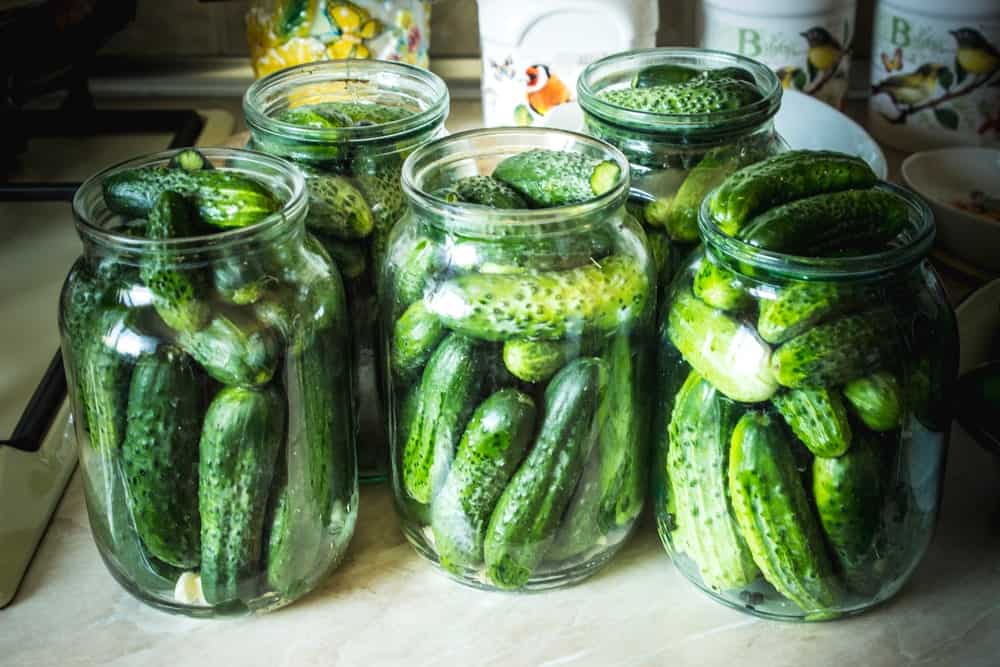 Pickling cucumbers are usually only three to four inches in length, which is shorter than cucumbers used for slicing, and they have thin spines and skins. Their color can be variegated and consists of dark or light green at the end of the blossom.

They can be ready to harvest in seven to ten days and you can tell that they are good for pickling just by looking at them because they have a “ready for the jar” look. You can harvest them at any time and use them for all types of cucumber recipes. They produce large crops of cucumbers in just a few weeks and they are very simple to grow. 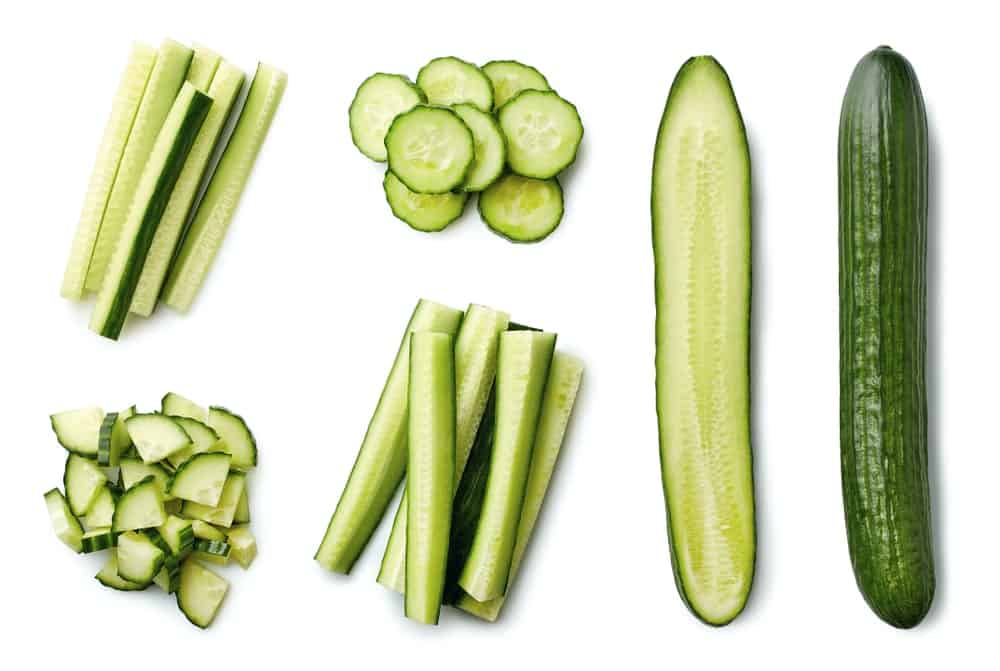 Slicing cucumbers are longer than pickling cucumbers, usually around eight inches in length, and they have much thicker skins as well. They are usually a uniform dark-green color, although some have a slightly variegated look.

Amiga cucumbers are thin-skinned and spineless. They have a delicious flavor and a dark-green color. They can grow up to six inches in length and are resistant to many types of mildew and viruses.

They are not recommended to grow in greenhouses and they prefer well-drained soil with a pH level of 6 to 6.8. As do many other types of cucumbers, Amiga cucumbers need warm air and soil to grow best, which means that they do especially well if you add a plastic-type of mulch to the plants.

Also called snake cucumbers or snake melons, the Armenian cucumber is long and twisted with a dark-green color. It has a thin skin with pale-green stripes throughout and as it ripens and matures, it turns yellow and has a great aroma. The cucumber also has a very mild taste.

These are long, slightly curved cucumbers that are lime green in color with stripes of a darker green. It is a burpless variety and has a crisp, white flesh. Because of their mild and sweet flavor, the Chinese Soyu cucumbers are frequently found in restaurants and farmers’ markets. They are a non-hybrid Asian cucumber.

Diva cucumber seeds come treated or untreated and this is one of the best-tasting cucumbers available. They usually grow from five to seven inches long and they are seedless, extremely tasty, crisp, and tender. They are great when grown in the outdoors and prefer warm, well-drained soil. They also do best when you rotate the crops; keep in mind that they don’t do well if it is too cold outside.

The English or European cucumber is one of the most common types of this vegetable. They are nearly seedless and have thin skins with no spines. They can also grow up to two feet in length.

Iznik cucumbers are a type of cocktail cucumber so they are quite small and thin-skinned. They are spineless and usually only get to three or four inches long. They are seedless and delicious as well.

Very resistant to scab and mildew, Iznik cucumbers should be picked daily if you want them to be high-quality and they also produce several fruits on each node. They need warm, well-drained soil to grow successfully, which means they’ll do even better if you add warm mulch to the plants.

Katrina cucumbers are best when grown in a greenhouse and when harvested at roughly six inches in length. They yield a very large crop and are very uniform in shape and size. They are resistant to various diseases, especially scab, and they are great for either slicing or snacking. Katrina cucumbers also produce early to mid-season during the growing season so you don’t have to wait long for them to arrive. 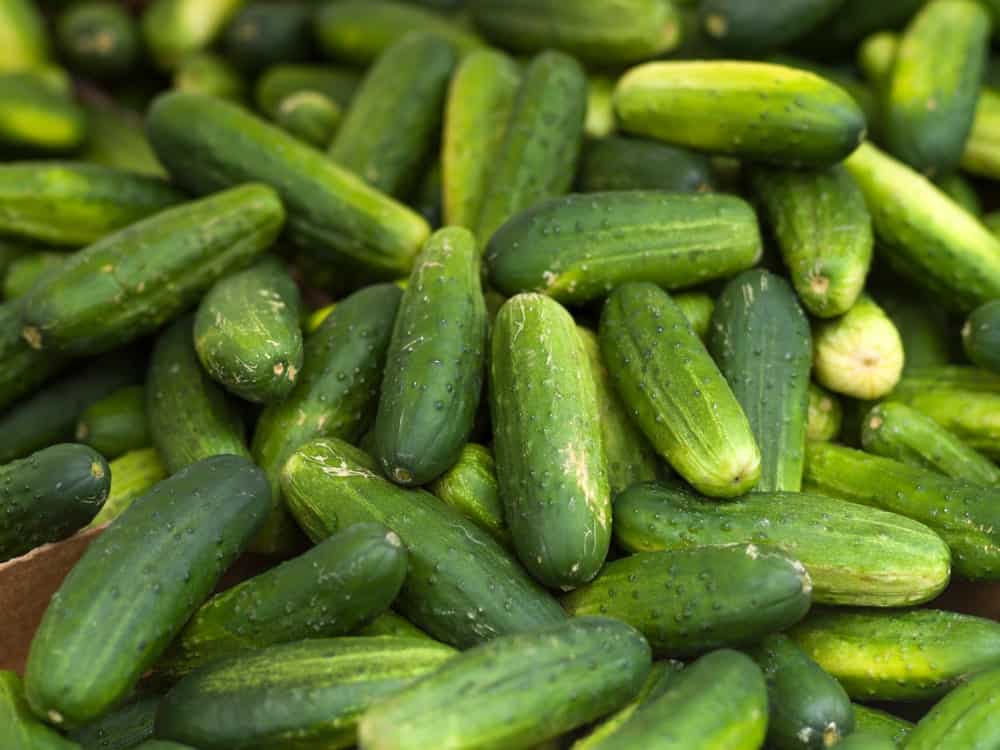 Kirby cucumbers are one of the most popular types of commercially grown cucumbers and they are usually sold unwaxed. They have thin skins, very few seeds, and a very crisp and crunchy taste.

They are firm cucumbers that are perfect for pickling and normally get to around five or six inches in length. They have bumpy skin and are crunchy and delicious. They can be included in salads and even salsas. 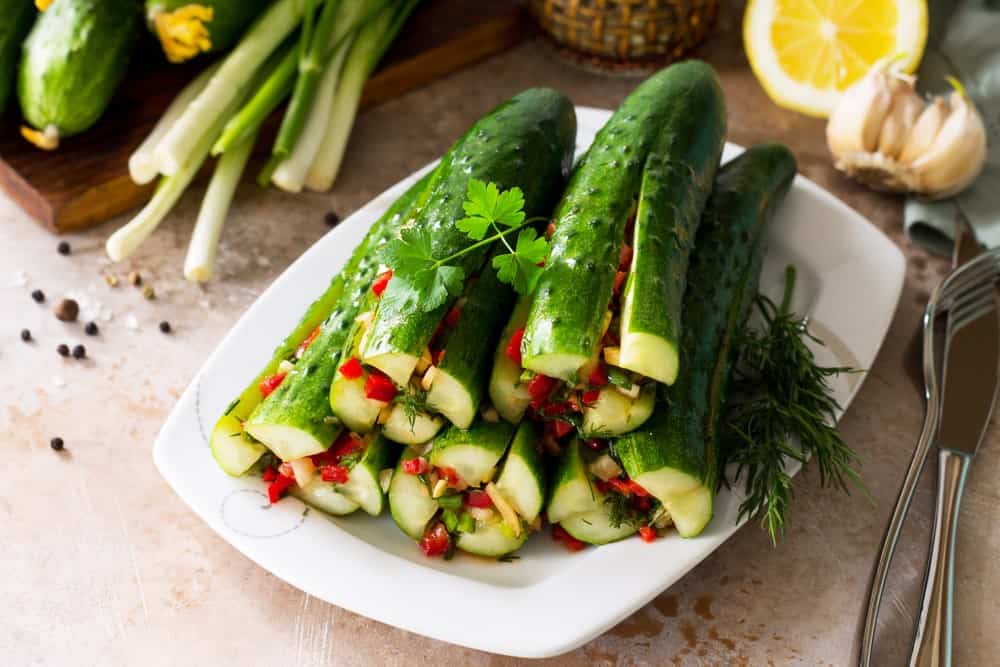 Korean cucumbers are long and slender with small spines and thin skin. If you eat them raw, they are crunchy and sweet without the bitter flavor of some other cucumbers. There are different types of Korean cucumbers, including the White Sun, Summer Delight, and Silver Green, and they are generally longer and thinner than many other types of cucumbers.

These cucumbers are perfect for salads and side dishes as well as for pickling and they are available all year long even though they peak during the summer months. These cucumbers are best when eaten fresh because of their crunchiness and flavor. 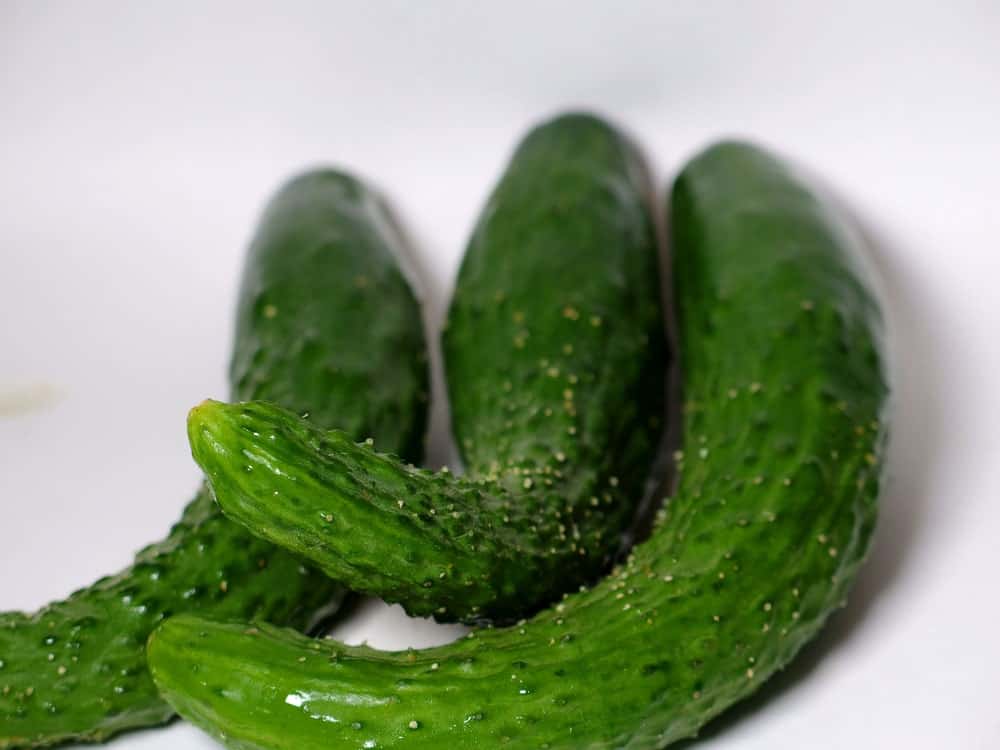 These cucumbers are very slim and have dark-green skin. They have thin skin with small bumps on them as well as very tiny seeds and a crisp, sweet taste. A burpless variety, the Japanese cucumber is extremely tasty and bears a lot of fruit for several weeks.

They also do best when trellised and grown vertically. Japanese cucumbers are related to melons, squashes, and gourds and they taste delicious in salads and as a pickled cucumber. Some of them reach two feet in length and have a three-inch diameter even though the most common type gets to around eight inches long. Although Western cucumbers tend to curve somewhat, the Japanese cucumber is usually very straight. 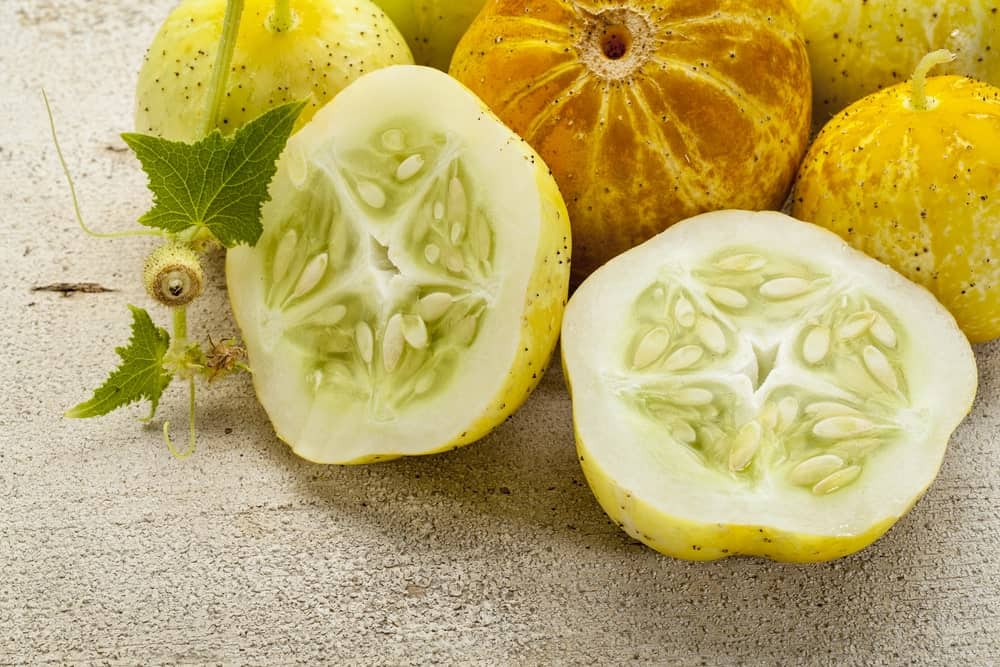 They have a mild taste and very thin skins, which is why a lot of consumers eat them with the skin on. When a recipe calls for any type of cucumber, you can use the lemon cucumber in it because it is a very tasty, very versatile vegetable.

Similar to the American slicing cucumbers, Persian cucumbers are a little shorter and more compact. They are crunchy and juicy and they are sturdy throughout most climate types, even those that are quite hot.

If you’re stir-frying a dish, try tossing in some of these cucumbers because they can be used in a variety of recipes. One of the biggest advantages of purchasing this type of cucumber is that they are available all year round and they have a sweet, mild, crunchy taste that all cucumber lovers adore.

Poniente cucumbers are quite long, up to 13 inches in length, and they are very resistant to scab. They grow straight, have trellising, and are sturdy and produce a lot of fruit each year. Most of these types of cucumbers fill out well and originated in Europe.

To grow this type of cucumber successfully, you have to wait until the soil is at least 70ᵒ Fahrenheit and they do well in soil that is warm and well-drained. In fact, both the soil and air temperatures need to be warm if you wish them to grow right and they do even better when you use some sort of mulch to keep them warm.

These cucumbers are a pale-yellow color, almost white, and get to approximately five inches in length. They have many translucent seeds and a crisp, mild flavor. They grow darker the longer they are left on the vine and they have bumps and black spikes on their skin, hence their name.

Blooming in mid to late summer, Salt and Pepper cucumbers are a hybrid cucumber that tastes best when eaten fresh or pickled. They have also won numerous food awards and they have been used in recipes for relishes, garnishes, and even hors d’oeuvres. If stored in the refrigerator, these cucumbers will last up to one month.

Socrates cucumbers have thin skins, are dark green in color, and are roughly eight inches long. As far as taste is concerned, this type of cucumber has one of the best tastes available. They are resistant to various diseases and if you exclude the pollinators you can end up with a seedless variety. You can easily grow the Socrates cucumber inside and in temperatures up to 82ᵒ Fahrenheit. If you want a more vigorous plant, you can use plastic mulch and row covers to provide warmth and protection from insects..

Tyria cucumbers are very long, averaging about 14 inches in length, and they are a beautiful dark-green color with a few ribs. They are usually grown organically and they are tolerant to stress and very sturdy. Tyria cucumbers are not bitter but have a delicious flavor and you can trellis them if you want cucumbers that are more straight. They are native to Europe and are very good performers so you should get a lot of cucumbers each year that you grow them.

These cucumbers are considered cocktail cucumbers and get no more than four inches in length. They have an excellent crunchy flavor and a great sturdiness. Very resistant to scab and mildew, the Unistar cucumber is going to grow better if you pick it on a daily basis as you do other types of cocktail cucumbers. They prefer warm air and soil temperatures, do better with mulch, and need excellent irrigation in order to grow right.

Watermelon gherkin cucumbers are not shaped similarly to regular cucumbers but instead are small and oblong, usually around one and a quarter inches in diameter. Because of their size and lime-green color with hints of dark green, they resemble small watermelons, hence their name. They are tangy and crisp and they have a slightly tart, citrus-like flavor.

Especially high in vitamins A and K, these cucumbers have become increasingly popular in home gardens because they are high producers and have a unique look and taste. They are also available from summer to the fall. 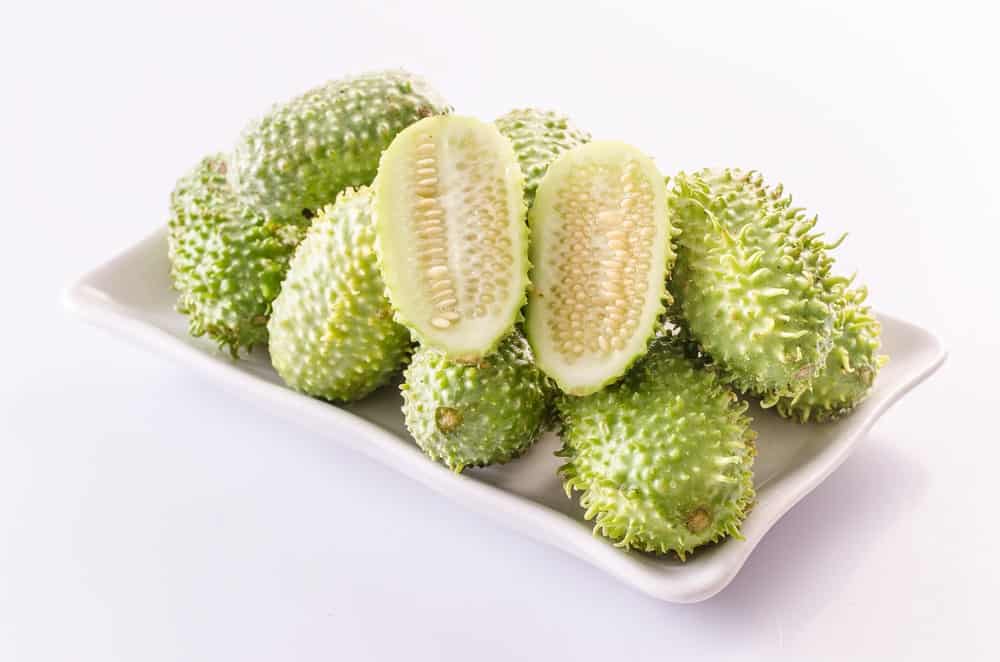 Averaging one and a half inches in diameter and two inches in length, these are small, round, and bumpy cucumbers with a crunchy texture and a strong taste that is a tiny bit sour. Although they peak in late spring, these cucumbers are available all year long.

They are also known as the Prickly cucumber, the Maroon cucumber, and the West Indian gourd and they can be eaten raw or cooked. They originated in Africa and came to the United States in the early 1800s. They are now found in many other parts of the world, including the Caribbean and South and Central America.