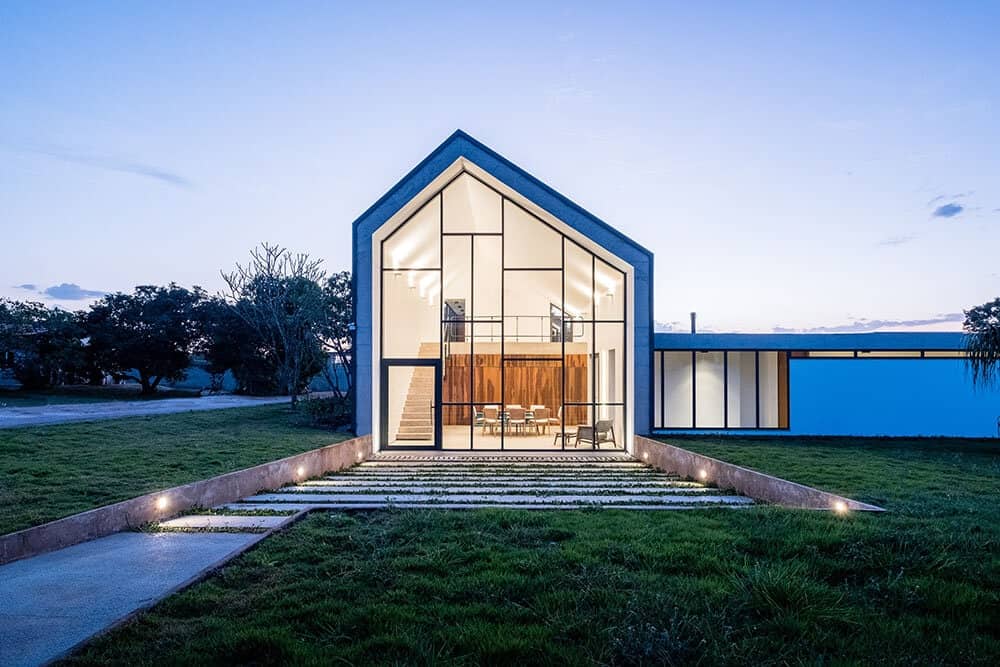 Two distinct volumes that dialogue with the characteristic Brasília flatlands – this was the general concept adopted in Casa Groba’s project. This general scheme presents itself in the landscape through the following hierarchy:

[ 1 ] The main pavilion, whose geometry disrupts with the conventional residential morphology, invites the spectator to overleap public and private domains, differentiated, here, only by a glazed plane. Inside its domains are placed, essentially, the gathering spaced of the housing program, creating a gradation to the more intimate spaces- the secondary block. [ 2 ] The secondary block, with its lower scale – mimicking the horizontality of Brasília’s plains – holds the more private spaces of the family, with fewer openings and more dialogue with the back portion of the site and its vegetation.

Even though the architectural partí establishes two different volumes to structure the project, there is, in fact, a harmonical dialogue that confers singularity to the overall design.

Constructive wise, the main pavilion is structured by concrete porticos that wide a span of six meters long; six of those are repeated with an interval of 4,60m, enclosing the general structural solution of the first block. This general conception is statically guaranteed by longitudinal beams in the upper floor’s slab plan and the roofing inclined slabs – these were carefully designed to create thermo-acoustic insulation when associated with the steel shingles of the façade.

Whereas the main block appropriates itself from an unconventional construction system, the secondary pavilion is built as a rigorous architectural piece with inverted concrete beams, columns, and slabs.