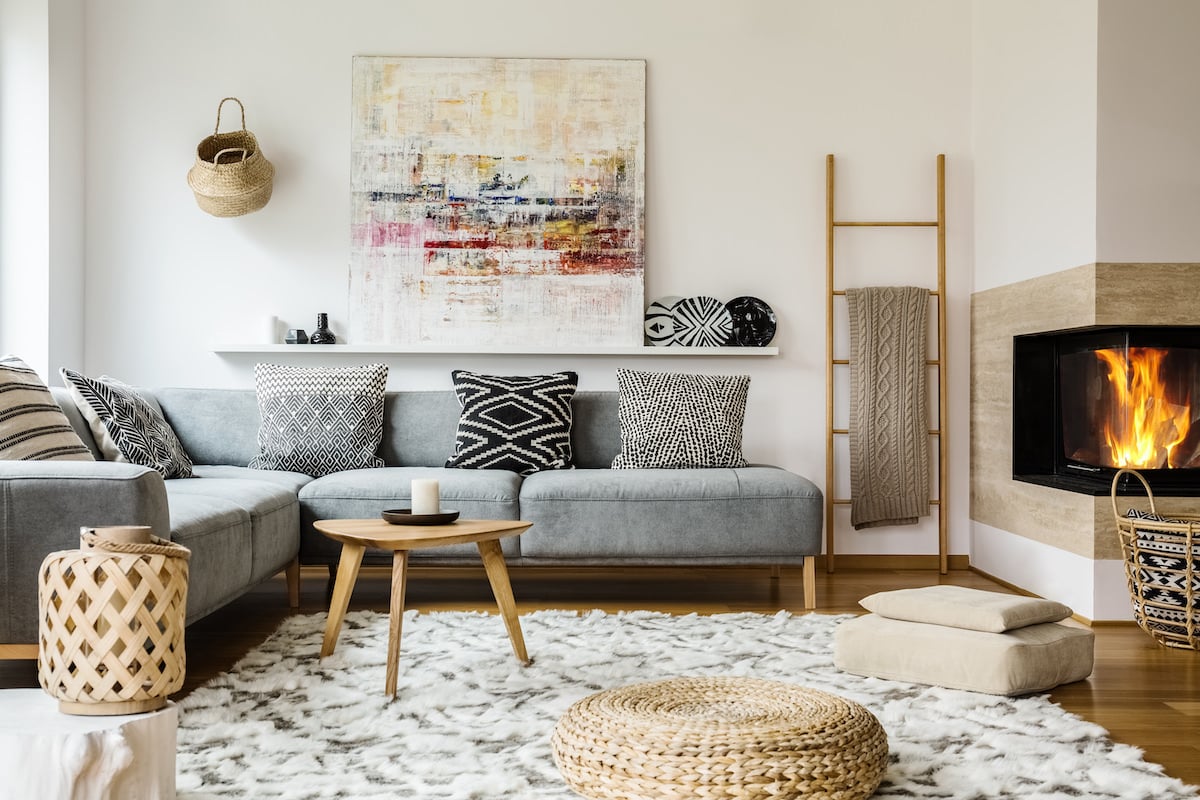 Sectional sofas have become a mainstay of the modern living room, but its history goes back further than you might expect. The casual style and invitation to lounge brought on by the sectional sofa may seem a reflection of contemporary times. However, the sectional sofas Victorian roots, and mid-century renditions say otherwise. Besides, who liked to lounge more than the Victorians? In this article, we’ll discuss the history of the sectional sofa, the socio-political impacts on its evolution through time, and its modern-day interpretations.

What is a sectional sofa? 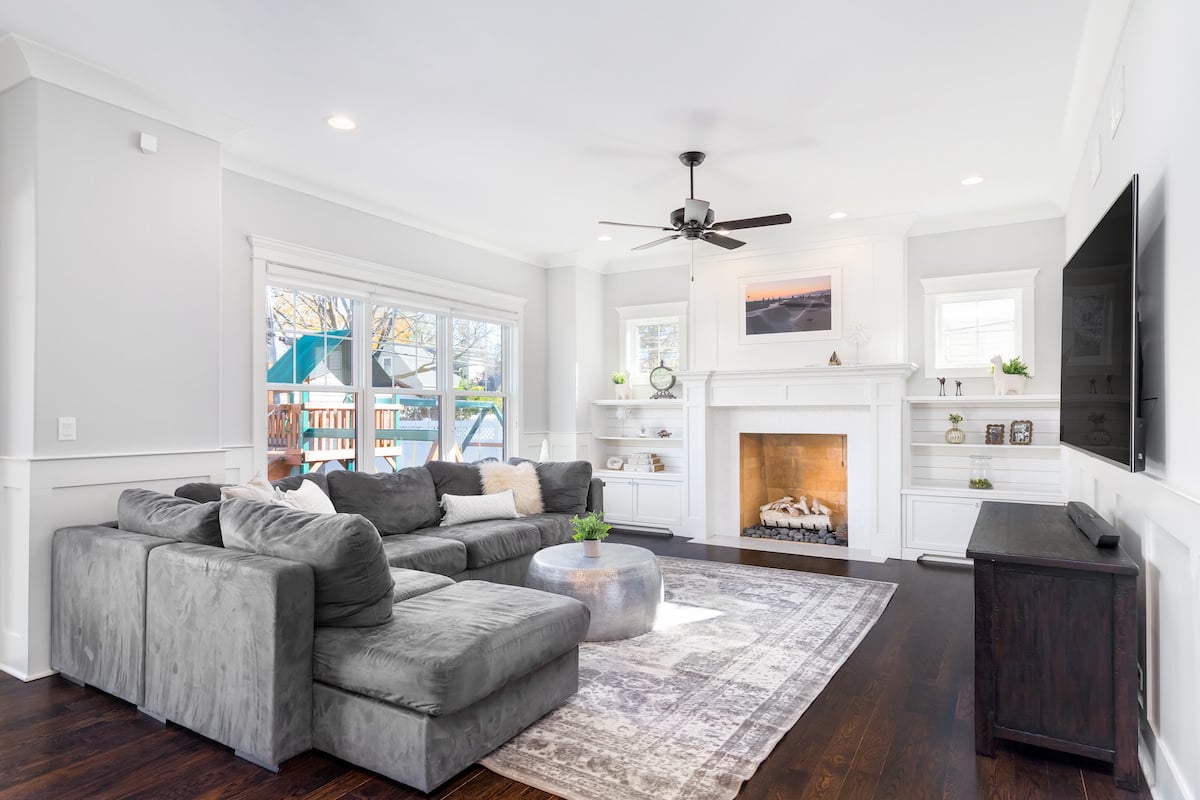 The sectional sofa, sometimes called an “L” shaped sofa, consists of multiple joined sections of seating, often including a longer chaise lounge-like section at its end. Often modular, the sectional sofa is able to transform to the needs of the room or its inhabitants. Able to be “separated and used as chairs at a moment’s notice or simply when the occasion arises”, most importantly “it creates an atmosphere for scintillating conversation”[1] says American decorator Carleton Varney.

The Victorian origins of the sectional sofa

The sectional sofa can be traced all the way back to the 19th century, though its popularity was regional at the time. According to Hunker the sectional originated in Virginia. Due to “the region’s heavy military influence, furniture that fared well on the battlefield — where it needed to be portable, easily separated, and moved from one camp to another — turned out to also fare well in the home”[4]. And so began the production of the early sectional sofa, though its reach would remain limited for the time being.

While the military origins of the sectional were purely utilitarian, it took on the tufted fabrics and wood carved ornamentation typical of the period, when it entered the home. Victorian design often was intended to display lavish wealth, as it was a period of prosperity for England as well as its colonies. The design of the period took influence from the Gothic Revival, and Medieval motifs and rooms were highly decorated. Because of this era of economic prosperity, the middle class was also participating in these displays of opulence, “with furniture, art, fabric, and decorative arts suddenly accessible to common people… People stuffed living spaces with beautiful objects…contributing to a ‘busy’ look that became characteristic of Victorian design, particularly in contrast to modern, minimalistic styles”[6]. During the Victorian Era, the chaise lounge and loveseat dominated the living space, but eventually, the sofa trend found in Virginia would see the chaise lounge and loveseat combined to create the sectional sofa. The sectional sofa would continue to be a mainstay in living rooms across the Western world for decades to come.

Modern Design as a reaction to World War 1

The end of the Victorian period was punctuated by the First World War, and with WW1 came a major social and economic shift across the world, which in turn also affected the ways in which we view art and design. One particularly influential reaction to WW1 was the Bauhaus School of Art, founded by architect Walter Gropius, in Weimar Germany. After the devastation of WW1 “Germany was forced to adapt to the changing governing structures of Western Europe…At the beginning moments of this interwar period, there was a belief that the end of war had driven out the past”[7]. With this ‘driving out of the past’, art and design were transformed. The decorative opulence of the past had been destroyed, and there was a desire for beautiful objects that served a purpose, while also representing this new world. The primary goal of the Bauhaus group was to start from scratch. This would lead to the minimalistic, and at times brutalist look we now recognize as modern design. 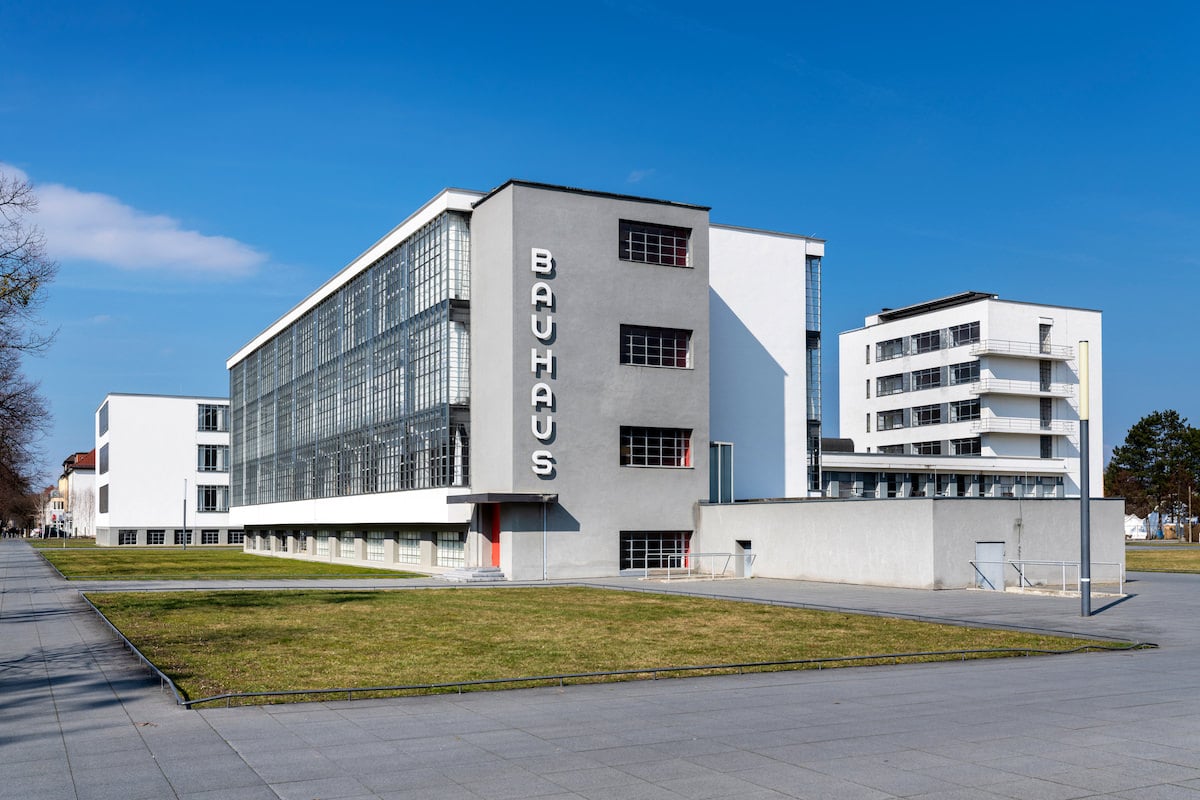 While the sectional sofa remained uncommon mainly until the turn of the century, the relatively new design saw a spike in the 1930’s and 40s. A predominant figure in the newfound popularity of the sectional was American “Gilbert Rohde, a designer for the pioneering modern furniture company Herman Miller”[2]. Rohde was heavily influenced by the Art Deco movement and the infamous Bauhaus school. Rohde was a pivotal figurehead in modern design and defined his philosophy of modern furniture as an “expression of the ancient and simple desire to make beautiful and useful things, suited to their purpose and to the tools and materials and tools available”[2]. Rohde would heavily influence the designers of future generations.

The continued evolution of the sectional sofa

Designers of the 1940’s and 50’s would take much influence from the Bauahaus movement of the 1920s and 30s, and would face another world war. Again creating a renewed desire for the beautification of a utopian society, where everything and everyone serves a purpose. The rising middle class and nuclear family model would also put great importance on the home, as well as community and entertainment. Design would not only display status, it would create an environment to rejoice after several years of conflict and destruction. The importance of hosting and entertaining was pivotal, and with this followed the continued modeling of furniture to facilitate and serve this purpose.

With this new found modern design, the sectional sofa was no longer coated in tufted satins or silks with ornamental wood. Rather it was in brown and black leathers, or brightly colored fabrics, with new futuristic shapes and aluminum detailing. With the underlying intention of the sectional sofa to act as a transformative object to aid in conversation and social gathering, it continued to show up in family homes throughout the 20th century.

Practically every decade since its conception, the sectional sofa has taken on new forms in order to accommodate the ever-evolving needs of the consumer. The 1950s and 60s, saw a departure from the early natural palettes and brutalist design of Buahaus modernism, and took on a new Mod shape, in the form of the ‘round sofa’ and other space-age forms. The influence of early space exploration in the 1960s brought a futuristic and atomic style into the home. Thanks to revolutionary American designers like Milo Baughman, the sectional sofa had remained a household staple through the mid-century.

The hippie movement of the late 1960s and 70s saw the sectional sofa take on a groovier form, into the less modular built-in conversation pit, consisting of a sunken living space completely lined by an arrangement of sectional sofas. The sectional could be found in tufted bright oranges and new geometric shapes. The primary intention of the sectional remained as a way to invite conversation, and elevate the hosting and entertaining ability of furniture, while also providing comfort and beautiful design.

The sectional sofa we recognize today

From the 1980s and onward, the living room began to turn away from entertaining guests, and towards receiving entertainment from the television. The furniture followed, and the new center point of the living room was the TV. With the focal point of the room shifting, the need for modular furniture that could be transformed to accommodate conversation among guests lessened in necessity. The sofa became a solid constant amongst its moving guests, rather than an object to be moved. Therefore its design became larger, deeper, more solid, and it lost its modular capability, leading to the bulky “L” shaped couch that we recognize today. Often blanketed in florals, drab neutrals, and crushed velvet, the sectional sofa had lost its original appeal, and now represented a place to plop down and watch television in isolation. 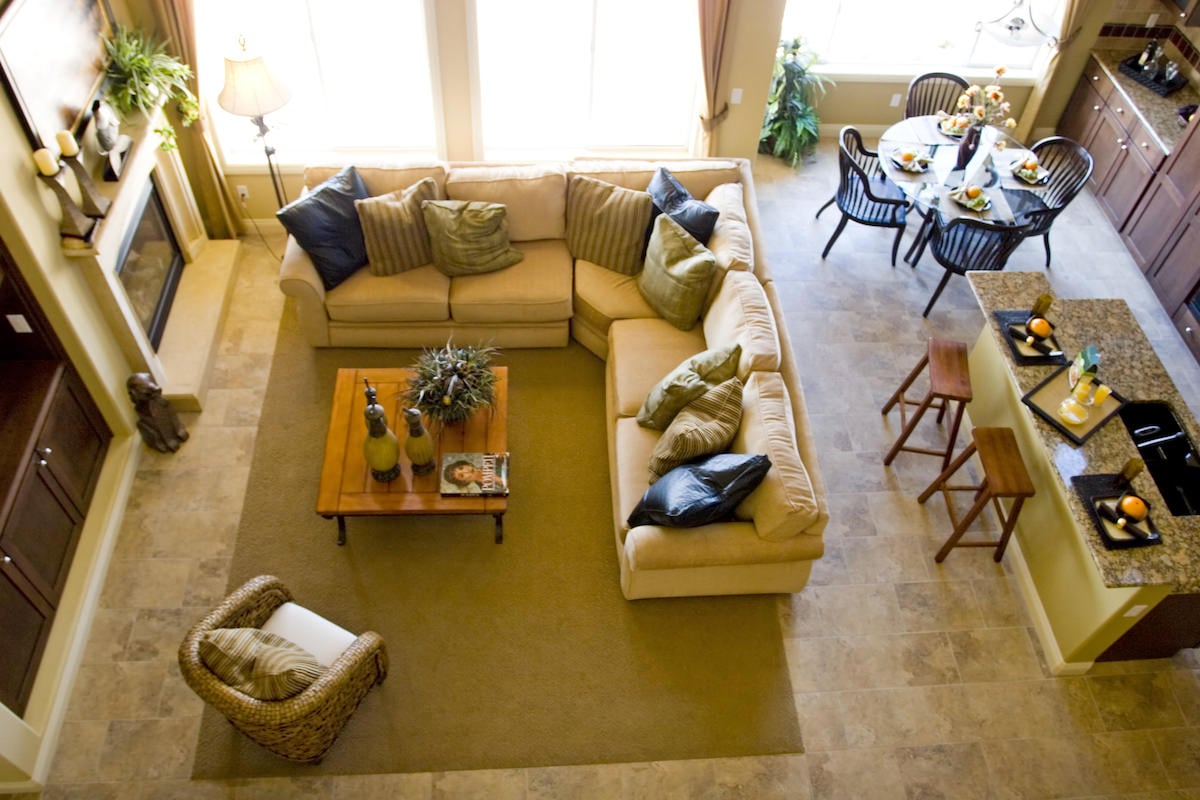 The sectional sofas’ popularity carried into the new millennium due to its ability to easily fill a large space, and its comfortability. In the early 2000s, the sectional sofa was featured with dark bolster leather or suede to match the dark and weathered elements of “faux Tuscan-style décor”[5]. Through the 2000s to 2010s, the sectional sofa was also found in whites, beiges, and light grays as a staple of the California Modern, and Farmhouse design styles popular in the period. 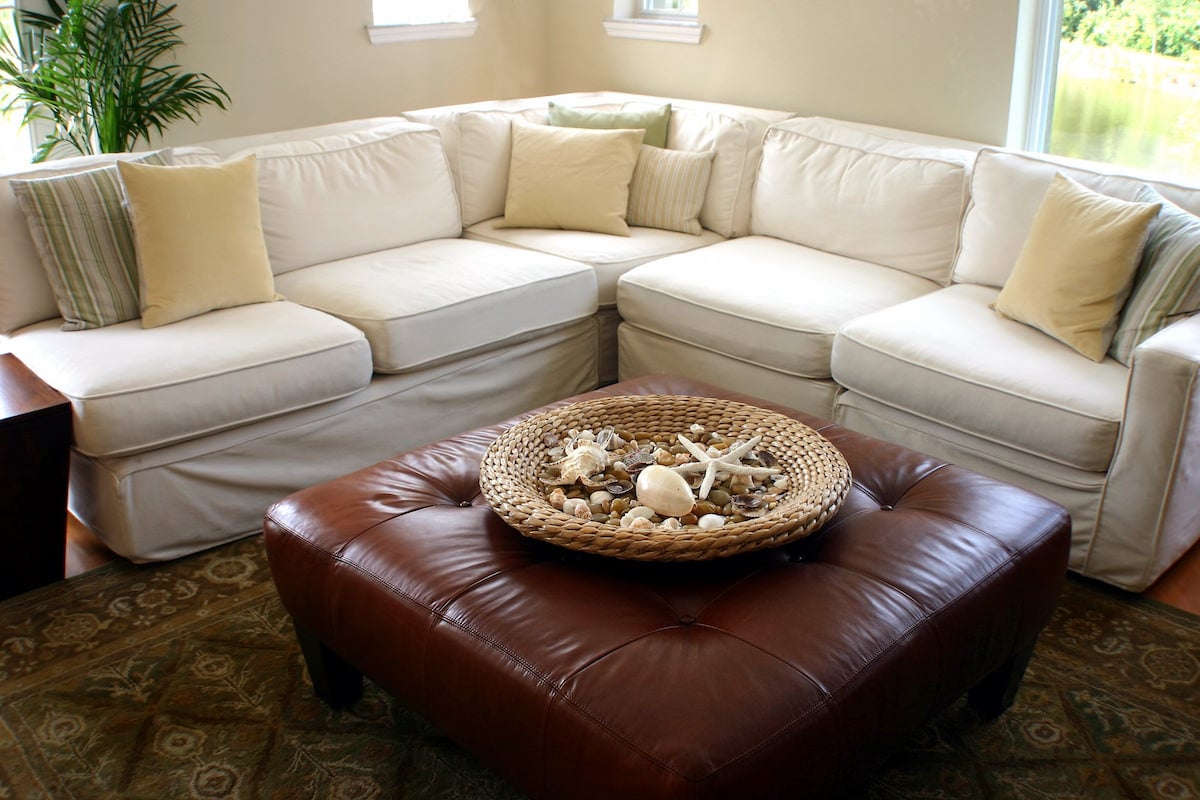 A trip to any furniture store today will evidently display the current resurgence of the mid-century design style, a style that was born in the mid 20th century. The term ‘mid-century modern’ was coined by author Cara Greenberg, “as the title for her 1984 book, Midcentury Modern: Furniture of the 1950s”[3]. The term itself “broadly describes architecture, furniture, and graphic design from the middle of the 20th century”[3]. But why exactly has this style become so popular again? It could be the elusive 20-year trend cycle that saw a resurgence of 1950s design appear in the 1970s, ’90s, and again in the 2010s to current. Or, it could be that the modern world looks back to the Jetsons’ like futurism of the Modernist movement of the 1950s for a design style that encapsulates the love of nostalgia with the ongoing desire of an idyllic future. Or, it could be simply, that good design just holds up through time. The movement from the TV culture of the 80’s to the 2000s has also transformed to mobile technology through the use of phones, tablets, and laptops. The need for a TV-centered living space, with a large dominating sofa, seems to be on the downtrend, as contemporary homeowners and renters look towards a post-pandemic world in which hosting guests can occur again. Why not then look back to furniture design that accommodated this the most fluidly?

The resurgence of 1950s design to the now “mid-century modern” take has also made these iconic designs more accessible through mass production. They are also even more adjustable now than ever, with online retailers allowing for size customizations, additions, futons, etc. The sectional is now more accessible, customizable, and modular than ever before. Current designers have ditched the mammoth sectional sofas of the 2000s for a truly modern, timeless, and sleek sectional more comparable to its original design and purpose.

The resilience of the sectional sofa

The sectional sofa has proven to stand the test of time, and is still in high demand. The viral ‘Cloud Couch’ from Restoration Hardware acts as a good example. Having recently taken the internet by storm, a modular and customizable sectional, the Cloud Couch shows us just how established the sectional sofa is in today’s home furnishing market. The sectional is appreciated for not only its comfortability, but also its flexibility and utility. It may not exactly serve as the impetus for the “scintillating conversation”[1] that it was originally intended, but its versatility surely remains a critical element for buyers. With modern designers nods to the revolutionary designs of the 1930s to the 1960s, the sectional sofa seems to be treated with the same appreciation that it was by the early modernists, who made furniture to act as part of a living breathing ecosystem (the home) rather than simply for adornment, or a surface to rest on.

Hopefully the next time you relax on your sectional sofa, you can feel the extensive history behind it, and begin to view the furniture in your space as an interaction with, and reflection of your daily life, rather than simply an object before you. What purpose does each item in your space serve? And if you’re having some trouble trying to keep your guests entertained, why not put the sectional sofa to the test.