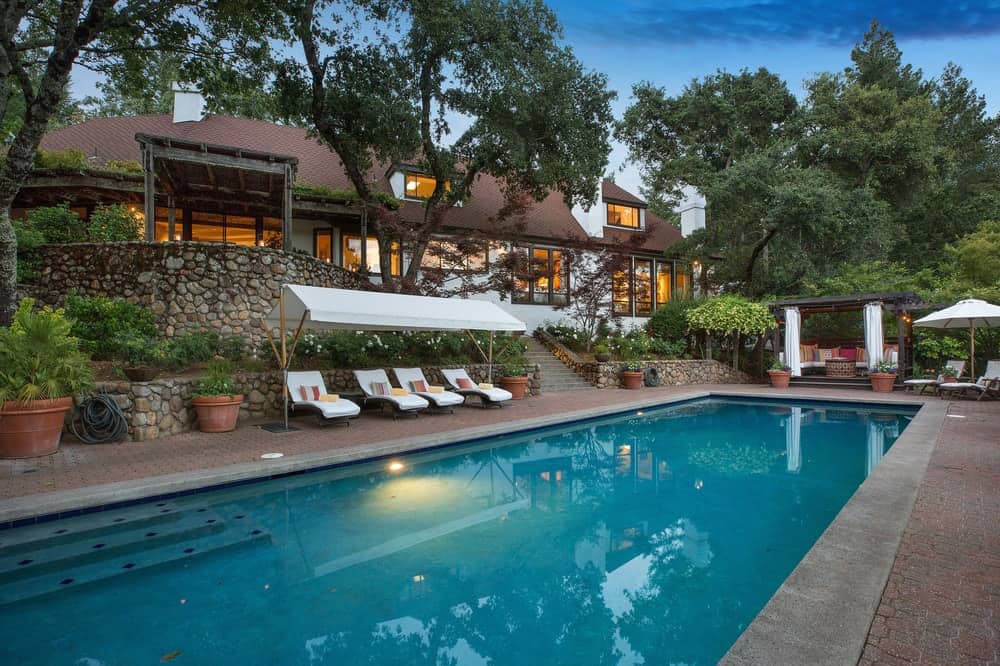 Few actors have contributed as much to the stage and the screen as Robert Redford. He is retired from the acting profession, but he maintains a Napa Valley estate that speaks to the career of a man who has a place in the heart of most Americans born before 1980.

If you’re looking for Hollywood royalty, you couldn’t do much better than Robert Redford. He has been a major presence on the big and the small screen since the early 1950s and has starred in titles like The Twilight Zone, for which he won an Emmy, War Hunt, Ordinary People, Butch Cassidy and the Sundance Kid, and a host of major Broadway hits. Redford is retired today, but that doesn’t stop him from owning one of the biggest and most outstanding properties in central California’s wine country.

The Napa Valley estate is listed for sale at $7.5 million. The floor plan encompasses 5,200 square feet and the entire property stands on ten acres of vineyard.

From the air, the estate appears humble and average due to the heavy concealment by the property’s many trees. The exception to this comes in the form of a truly enormous pool that looks to be about double the length of a standard Olympic sized pool.

First, it must be said that many celebrity homes have ornate ceilings, but few have such tasteful and consistently superior ceilings as the Redford estate. With cross-works of solid, supportive overhead beams in every room, one gets the feeling that the structure must be extraordinarily sturdy.

The living room is open and airy, with all the masculine solidity you’d expect from the Redford name. The vaulted ceiling makes the space even more inviting. Light-colored pine wood flooring covers the foundation from wall to wall in this room and it seems to vastly multiply the amount of available light.

The furniture is light, and there is little to sit on. It would seem that this room is meant more for planning than for lingering. For that, the Redford home has other offerings.

The kitchen is noticeably darker than the other rooms. A stove-top range is built into a central prep island. Horizontal pizza ovens can be seen off to the right of this. There is more cabinetry than anything else, which is a curious configuration.

The primary bedroom has the most outstanding ceiling with thicker, heavier pine beams. The room is surrounded on all sides with walls full of sliding glass doors. The floor is fully formed from white marble, and all around the very open room is a verdant Californian forest. This same forest has been a great part of Redford’s life as he is exceedingly fond of walking it at every given opportunity.

This unique home speaks to the spartan and purpose-driven mind of the man who has given so much to the stage and the screen.