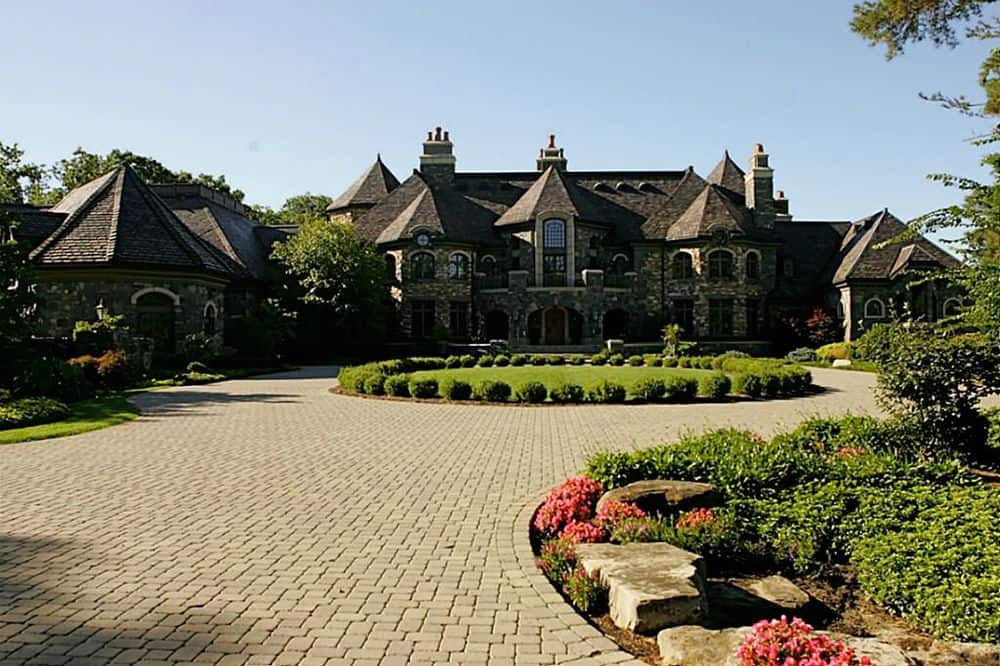 The mansion of the late Richard Freeland, former owner of a massive of Pizza Hut and KFC chain, has to be seen to be believed. As one of the most elegant multi-million dollar homes we’ve covered, it’s truly outstanding. As with the splendid Anheuser-Busch mansion, we mustn’t judge too quickly.

Pizza has been around for at least a couple of thousand years. Inspired by the portable lunch food of Roman road builders, the food item has undergone numerous makeovers since then. One of these makeovers might very well be represented by the establishment of one of the nation’s biggest and most successful fast-food pizza chain restaurants. The fast-food chain tycoon, Richard Freeland, made his fortune in Kentucky Fried Chicken and Pizza Hut outlets. Despite his passing, his family is the proud owner of a truly awe-inspiring mansion: the House that Pizza Built.

All photos are used with permission from TopTenRealEstaeDeals.com

Coming up the main drive to the front of the house, it looks rather Gothic with multiple spires, arched stone windows, and bigeminal chimney pipes dotting the apex of the roof.

As we ingress via the entryway of The House That Pizza Built, we find ourselves in palatial surroundings with large marble columns, arched, porcelain lined recesses, an exposed upper level with a wrought iron banister, classically inspired sculptures, marble tile flooring, and a pile of old pizza boxes in the corner. (Just kidding.)

The main living room or sitting room is as elegant as can be, with delicately tiled and beautifully polished hardwood flooring. Crown and vertical molding all around the room speak to classical architectural sensibilities, and the furniture is graceful and contemporary- hearkening back to the mid to late 19th century.

The dining room is equally delicate with not one tomato sauce stain to be found. The dining table seats 10 and is rendered in subtly but beautifully detailed oak construction. An unusually ornate fireplace stands behind the head seat and appears to be made of gloriously detailed red marble. Now, we’ve never heard of red marble before, but that is what it looks like and it is stunning.

The kitchen truly is a marvel with marble tiled flooring, a full complement of chromed and steel appliances, and all-redwood cabinetry. In the center of it all is the king of all kitchen islands. It appears to be six by twelve feet and about four feet high, standing on finely crafted wooden legs. It would appear that this “kitchen island” is actually a massive table lined with cabinetry of its own.

In the primary bedroom, we find an even more refined sense of interior decor has been expressed. The headboard and the high arched windows are decked in what looks like very expensive drapes. Light browns dominate the scene to create a feeling of warmth and comfort.

One would not anticipate so much high taste and class to be expressed by a fast-food chicken and pizza chain owner. But the home of the late Richard Freeland is a revelation and has proven us to have been far too quick to judge.