Palatial Asherwood Estate -- former home of shopping mall magnate Mel Simon -- is now listed for $25 million. The property boasts a number of amenities, including a two-story library, many lush formal rooms, a professional gym, and an indoor pool. Outside, a private 18-hole golf course surrounds the property. 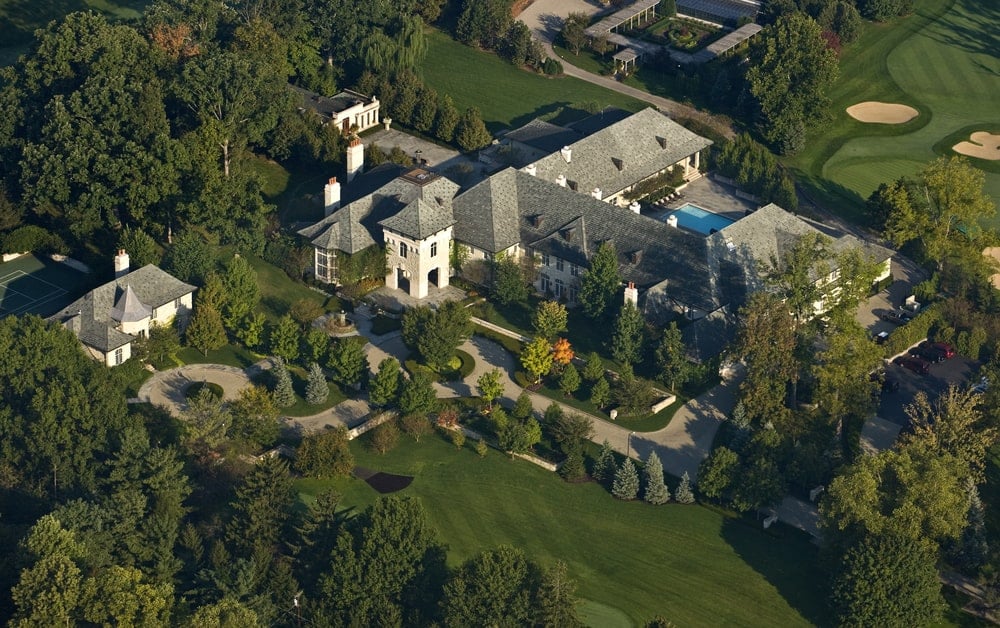 Mel Simon was known as a co-owner of the Indiana Pacers basketball team and as a shopping mall magnate. His palatial Asherwood estate is now on the market, listed at $25 million. The estate boasts sprawling square footage, and a number of additional features, including a private 18-hole golf course.

Mel Simon, who died in 2009, established his real estate empire by building strip malls in Indianapolis and expanding outward in the Midwest. He went on to shape the theme of suburbia by developing beyond strip malls, into shopping malls, eventually becoming a developer of the Mall of America in Bloomington, Minnesota, as well as other notable developments across the globe. During his life, his property company developed and owned nearly 400 properties in North America, Europe, and Asia, and was the largest mall operator in the United States.

Those who knew and worked with Mel Simon knew he always carried an aura of excitement, a colorful and refreshing description of a man who helped develop the business model for modern mall operators.

At a time when many feared that the Indiana Pacers basketball team would move to Sacramento, Simon and his brother stepped in and bought the team to keep them in the state.

The mansion in the suburbs of Indianapolis comes in at a whopping 41,517 square feet. The estate features seven bedrooms and 16 bathrooms, a full caterer’s kitchen, and many lushly-decorated formal rooms — including a billiards room.

Other notable features are a home theatre, a library, a full professional gym, and private indoor and outdoor pools. Outside of the main building is a private 18-hole golf course, entirely within the property, that surrounds many of the buildings. A full guest house, clubhouse, and greenhouse, as well as a handful of maintenance buildings, can also be found on the property.

Tall trees and lush lawns surround much of the property, making this estate comfortable and inviting, especially as you first approach the main house. Many of the formal rooms are home to multiple chandeliers and coffered ceilings, giving the entire mansion a palatial feel. The library in the main house features two levels, with balconies and sweeping windows.

All in all, this estate is one of the largest in the country. It features luxurious design and numerous amenities and sits in one of the top suburbs in the country, just a few miles north of downtown Indianapolis. The suburb, Carmel, features an Arts and Design area, a Farmers’ Market, and regular functions at the City Center. The public outdoor space also makes a mark; Carmel provides sophisticated home town charm through miles of well-kept walking and biking trails, in addition to the regular community events.

The Asherwood estate was originally built in 1999 and is now on the market for $25 million.