The home that was the set in several seasons of Keeping Up With the Kardashians is now for sale. Asking price: $8.995 million. Modeled after an Italian castle, the mansion is nestled in the Hollywood hills. Discover why this Palace of Dreams, as it's called, really is a dream house. 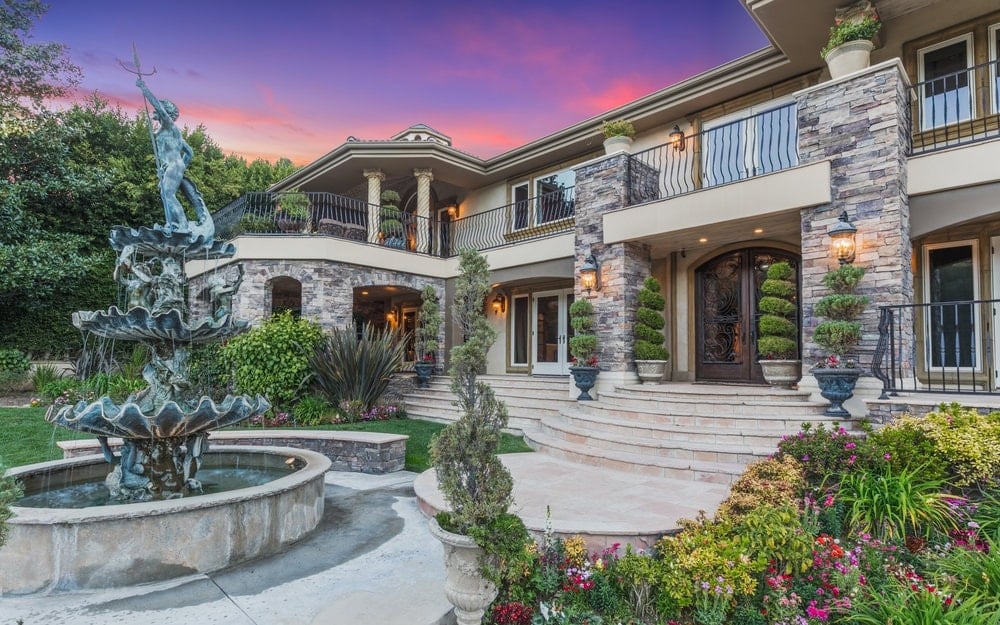 Ever wanted to go behind the scenes to check out the sets for reality shows? Here’s a virtual tour of the Studio City, California TV set for Keeping Up with the Kardashians. What’s so special about this gated house nestled in the Hollywood Hills? Its impressive size and amenities, of course. Besides, it’s for sale at the modest price of just $8.995 million. It’s located in the Fryman Estates neighborhood, home to Bruno Mars, George Clooney, and Miley Cyrus.

Welcome to the Palazzo die Sogni — that’s Italian for “Palace of Dreams.” It’s designed after the castle that was built by the powerful Medici family, who ruled Florence, Italy from the fifteenth through the eighteenth centuries. The Studio City mansion was built in 1983, long before reality TV became a “thing.” This iconic home has been the set for other shows, too — True Blood, Entourage, and Rome. It served as the made-for-TV Kardashian-Jenner home for ten seasons.

Situated on about one acre of meticulously-manicured lawns and exotic plants, the home got a serious makeover in 2005. The “palace” is decked out in intricate woodwork and Venetian plastered walls and ceilings. In keeping with the Italian theme, some walls display murals by artist Giorgio Tuscani. Seventeenth-century chandeliers hang from the ceilings, too, giving the home an aura of elegance fitting for a Mediterranean castle. Sconces hang on the walls, adding a bit of a romantic ambiance. Plus, there are plenty of places for candles in case of a power outage.

Measuring an impressive 7,800 square feet, the home has enough space for all the amenities you’d expect, plus several “extras.” When you climb the steps and pass through the palatial entrance, you’ll enter a two-story foyer, which leads to a formal living room, dining room, and paneled den. Equipped with Viking appliances, indoor and outdoor kitchens offer more casual dining areas. At-home movie nights take on a new look in the screening room/home theater, complete with a 12-foot screen. The billiards room has been the site of many a lively tournament. Another highlight of the Kardashian mansion is the 2,000-bottle wine cellar.

When overnight guests want to retire for the night, they can enjoy luxury lodgings and plenty of space. The Palace of Dreams has seven bedrooms and eight bathrooms. Balconies wrap around much of the second floor, offering majestic views of the lush landscaping.

Although the lot is modest in size, it makes the most of available space. Besides the house, one of the most striking features on the property is the saltwater swimming pool and waterfall. There’s also a mini-parking lot on-site, with room for up to ten vehicles.

Created by executive producer Ryan Seacrest, Keeping Up with the Kardashians is in its 18th season but has already begun filming for the 19th, making it one of the longest-running reality shows in the US. Robert Kardashian, who passed away in 2003, was well-known for defending O.J. Simpson during the former football player’s highly-publicized 1991 trial.