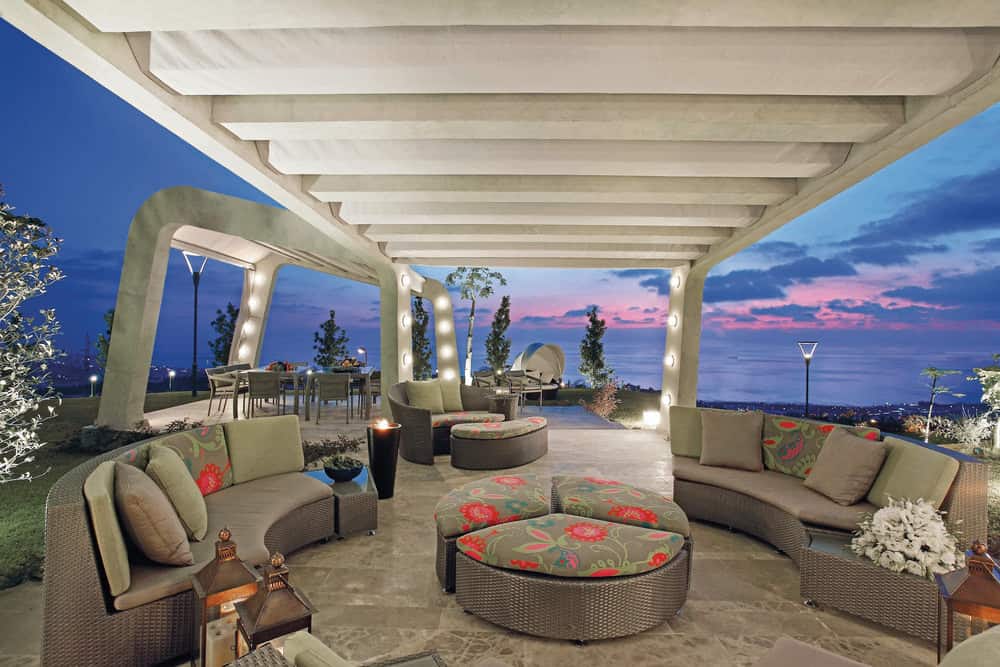 At Wael Farran Studio, Senses was nothing short of a challenge! Located in South of Lebanon, Senses is a pool house that was conceived and built as an extension to an existing residence. Therefore, the project is a beautiful exercise in fusion, where interior, exterior and landscape unite to create one holistic lifestyle canvas that speaks of design excellence.

The aim was to create a hidden zone interrelated to the villa, yet isolated enough to respect the family’s privacy. Over a year and a half, the 3000m2 olive grove was transformed into the perfect spot to receive guests, party or relax. The pool house includes a big family room, a gymnasium, a bedroom, 2 bathrooms, a hairdressing area, outdoor showers, a service kitchen changing rooms, and sink zones. A pool house is not completed without a pool and Senses boasts not one, but two pools as well as a Jacuzzi.

Olive groves in Lebanon are characterized by their various levels for optimal use of the land. While the olive trees were carefully transferred into a different area, the levels in the land were used to build a Jacuzzi overflowing into an infinity pool that merges with the horizon and ends with an 8m waterfall pouring into a smaller pool on the lower level. The area also includes a swimming pool for kids. Two modern Gazebo sculptures enhance the connection with nature and add a subtle grip on the open spaces. The space’s zen feel during the day turns more mystical at night with the strategically placed lighting all over the area. With lights from the sides rather than the top, the gazebos offer a unique spaceship feel enhancing the mystique.

The outdoor area is equipped with showers of different heights reminiscent of the level nature of the project with a waterfall like flow when turned on, for a pleasurable after swim experience, as well as a sink and bathroom area for guests.

Choice of material was made with meticulous attention: because it goes well with the Bisazza mosaic tiles of the pools, Indian limestone was the dominant material for the facades. To emphasize the project’s open-air nature, the ceiling was combined with the upper zone garden, while the dividing walls of the interior space were built in a way to maximize visibility of the whole area from inside creating an outside experience.

The indoor of the pool house is uniquely divided giving a flow in the space for additional comfort and privacy. Sliding massif wood doors allow smooth movement from area to the other, adding the nature element to the indoor space. Hues of greens and blue bring the outside in, while the custom-made furniture marries comfort with style. The bedroom has its own private access to the garden as well as en-suite bathroom made of marble and mosaics as are the outdoors bathrooms.

“The idea was to blend the indoor into the outdoor in form and feel. Through that unique blend, Senses speaks to the heart and the soul” explains Wael Farran, Founder and Lead Designer.

It is almost impossible not to be seduced by this fanciful flight of the imagination … discerning taste, a critical eye for detail and the gracious architect’s manipulation of space make this pool house a pleasure for the eyes, inside and out.

Wael Farran Studio is a Beirut-based interior architecture practice and home of FORMITABLE, a special line of one of a kind tables. With successful completed residential and commercial projects in Lebanon, Paris, Dakar and Cairo the studio specializes in bespoke homes and refined projects.

Founded in 2000 by Wael Farran, the design studio made its mark in the market due to its innovative and versatile designs. “A designer should never repeat himself” explains Farran, “nor should he limit himself.” This is why the firm’s designs span across various styles from Classical to Contemporary, passing by Neo-Classical, Art Deco and Modern, sometimes with a twist.

Over the years, we have created an environment of trust with our clients, utilized our excellent relationships with suppliers and craftsmen and managed the project in its smallest details leading to a perfect final execution and a seamless project experience.

Born in October 1975, Wael Farran grew up in Tyr, his native city where he was “raised by illusions and reality, molded by the music of the world.” as he likes to describe his childhood. He came to Beirut and after a year of studying law, he shifted to design and graduated in 2000 from the Lebanese American University with a BA in Interior Architecture

If at first, Farran thought that interior architecture was about furniture layout and drape selection, he quickly learned there was more to it and embraced the search for elements and space with passion. Today he has over 18 years of experience under his belt with a myriad of satisfied clients.

Farran, the interior architect sees himself as a sculptor. For him, each elevation has its beauty and its potential. “A good design is one that is both beautiful and functional,” explains Farran. This is why the human being is at the core of his creations. Each space must serve the person using it, providing aesthetic and functional comfort. Hence great flexibility in design that spans in various styles and currents. “I have been transforming spaces for over 17 years, without restraining my signature to specific structural designs and techniques, drawing my inspiration from the city of cultures and contrasts, Beirut.”

Farran’s signature hides in the attention to details. Details that turn a space into a home or a personal area. “Being aware of the client’s psychology is essential. I keep in mind that the space I am designing is made for a specific individual, hence it should fit their lifestyle and reflect them in addition to serving its function “

Farran is also the lead designer of FORMITABLE, a line of custom-made, one of kind line of tables. “Because tables are the focal point of a space and of our human interactions, they deserve a special attention.”

For Farran, designing is giving part of one’s self. He believes that every creation he does starts and ends with the heart. “A piece of art, a piece of my heart,” he always confirms, smiling.