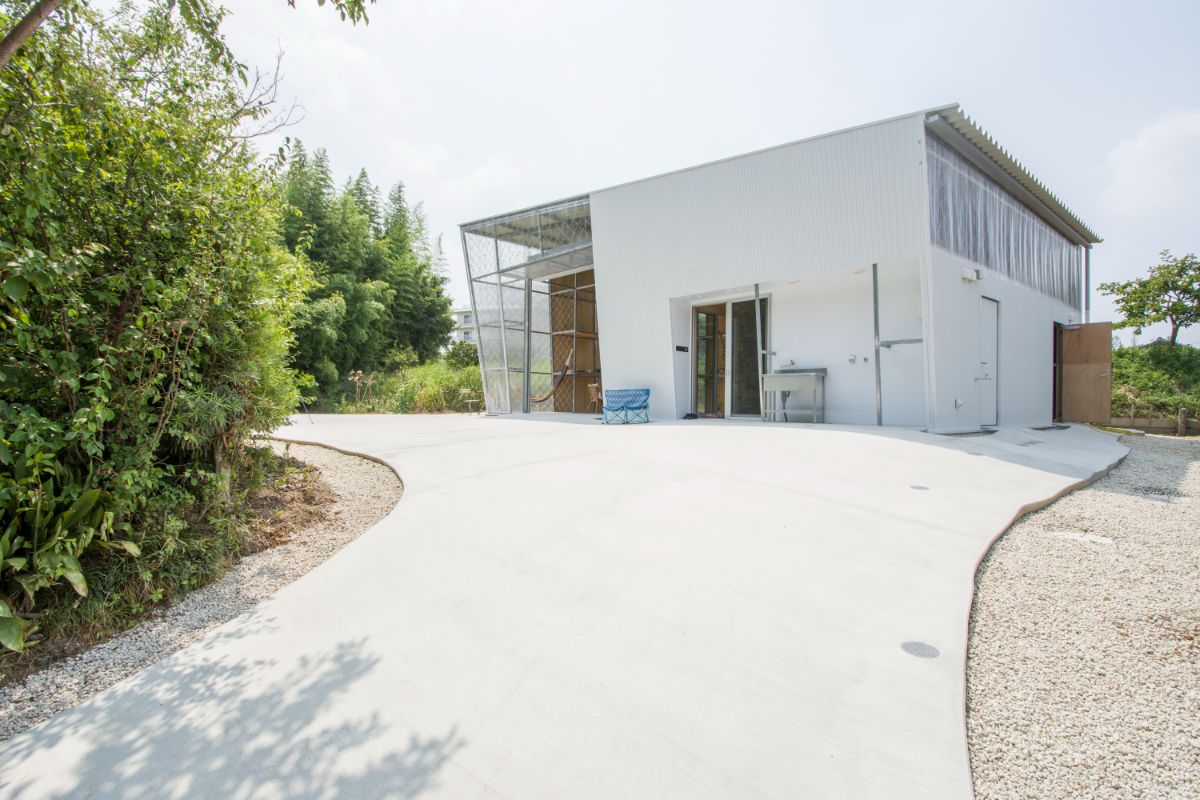 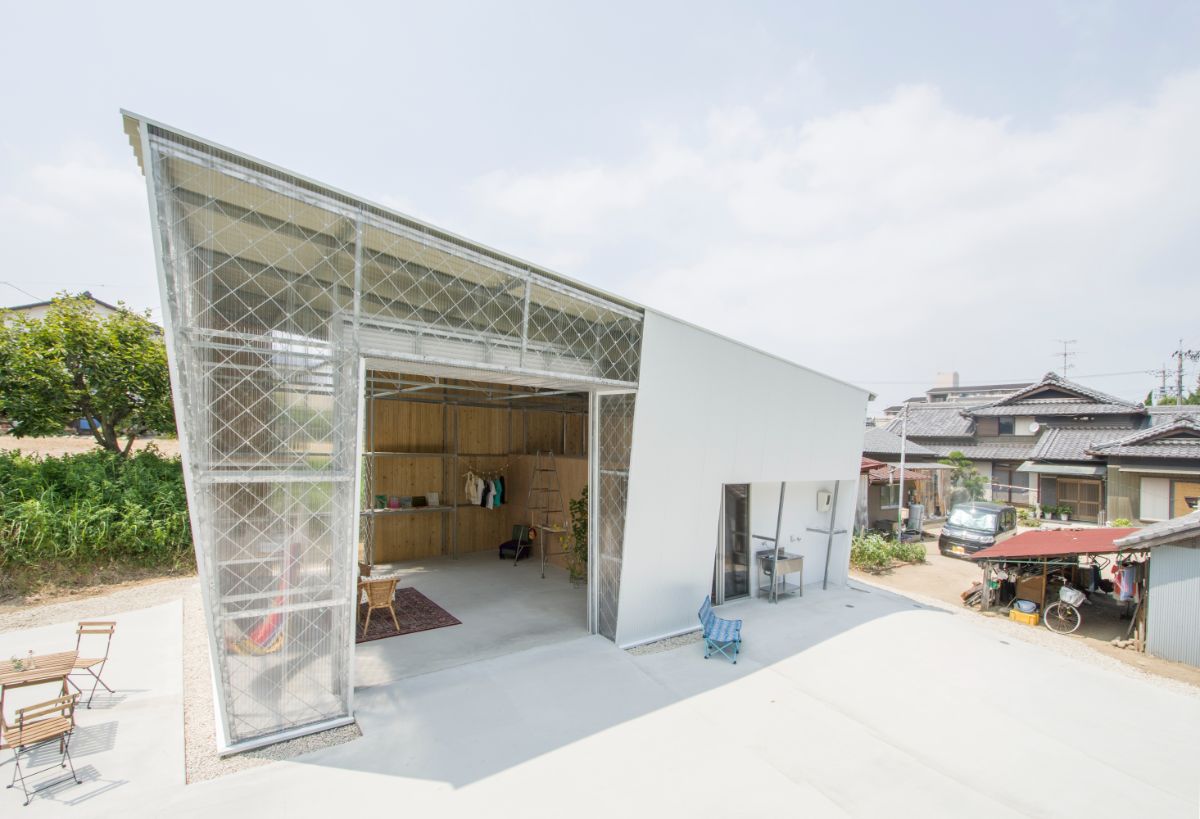 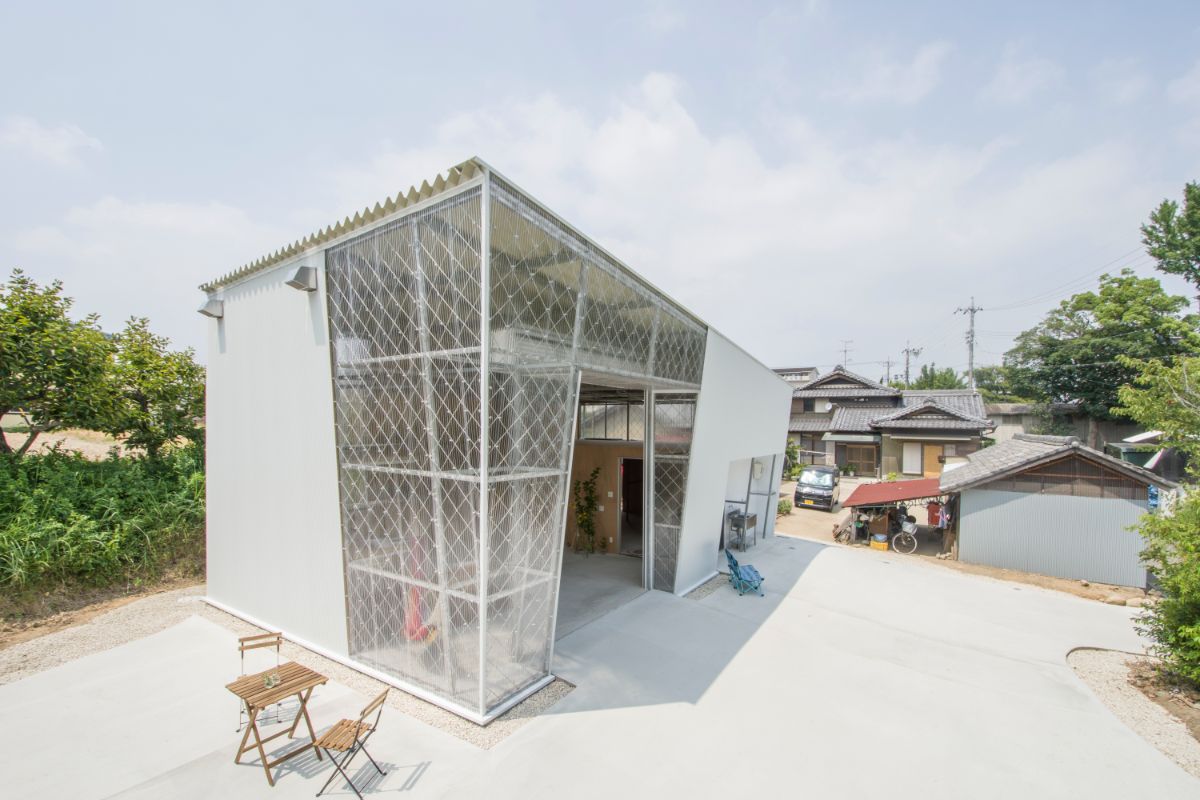 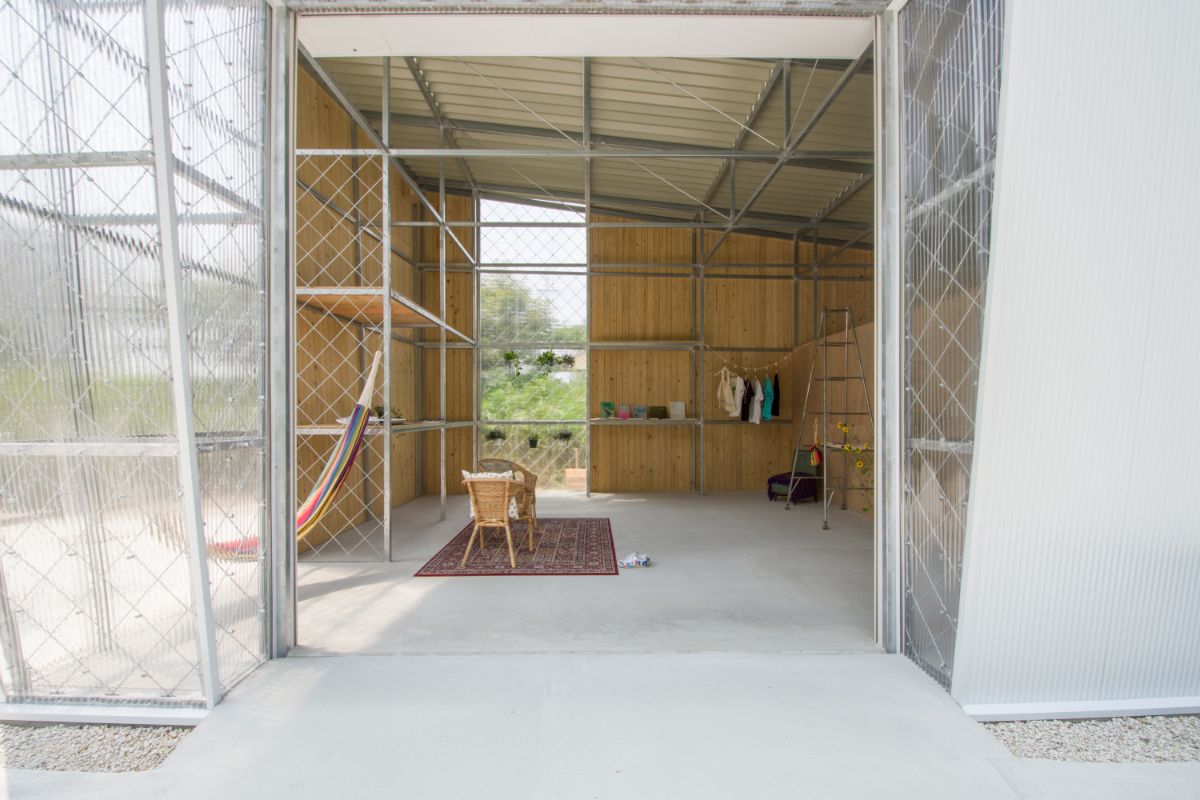 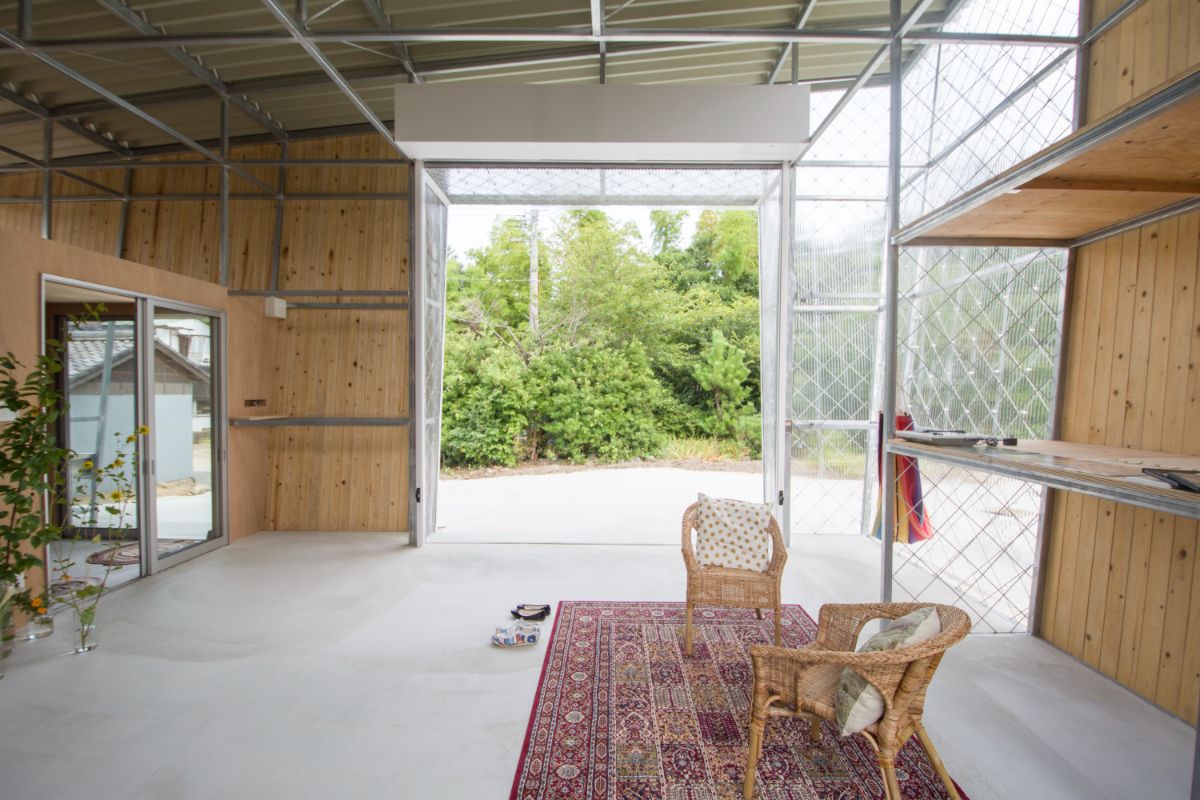 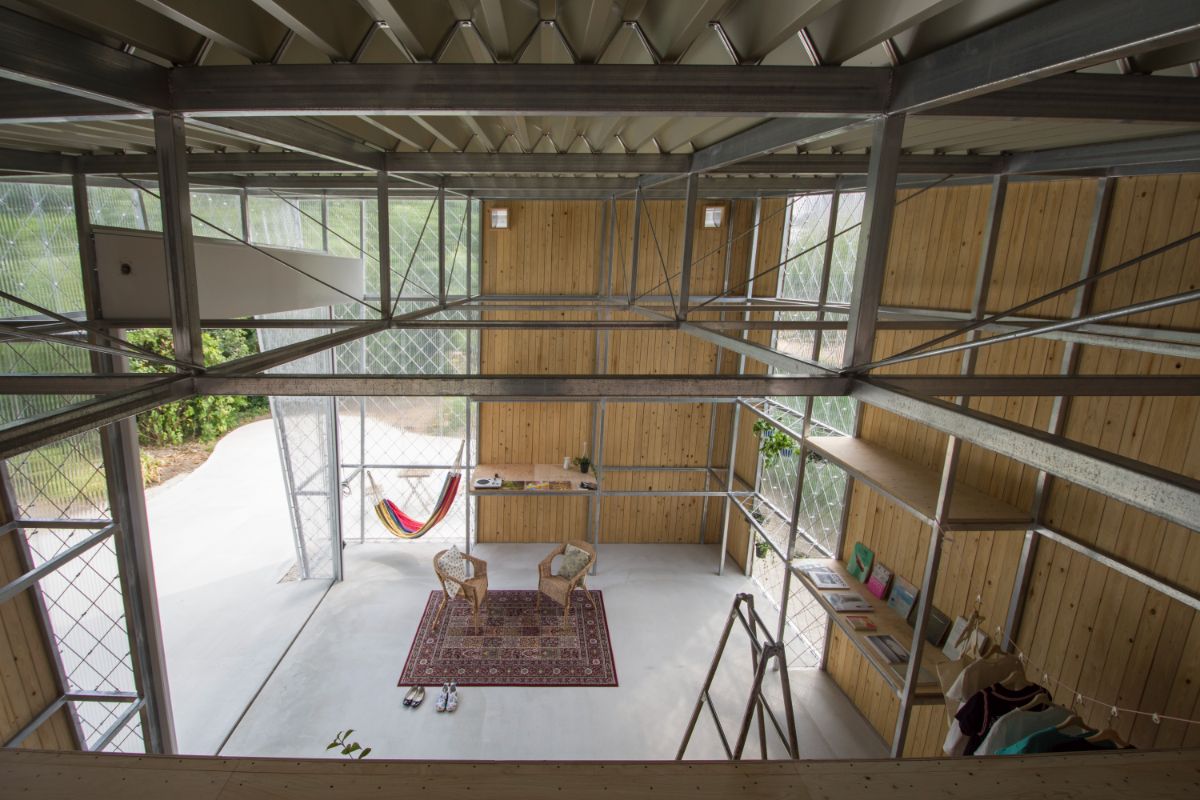 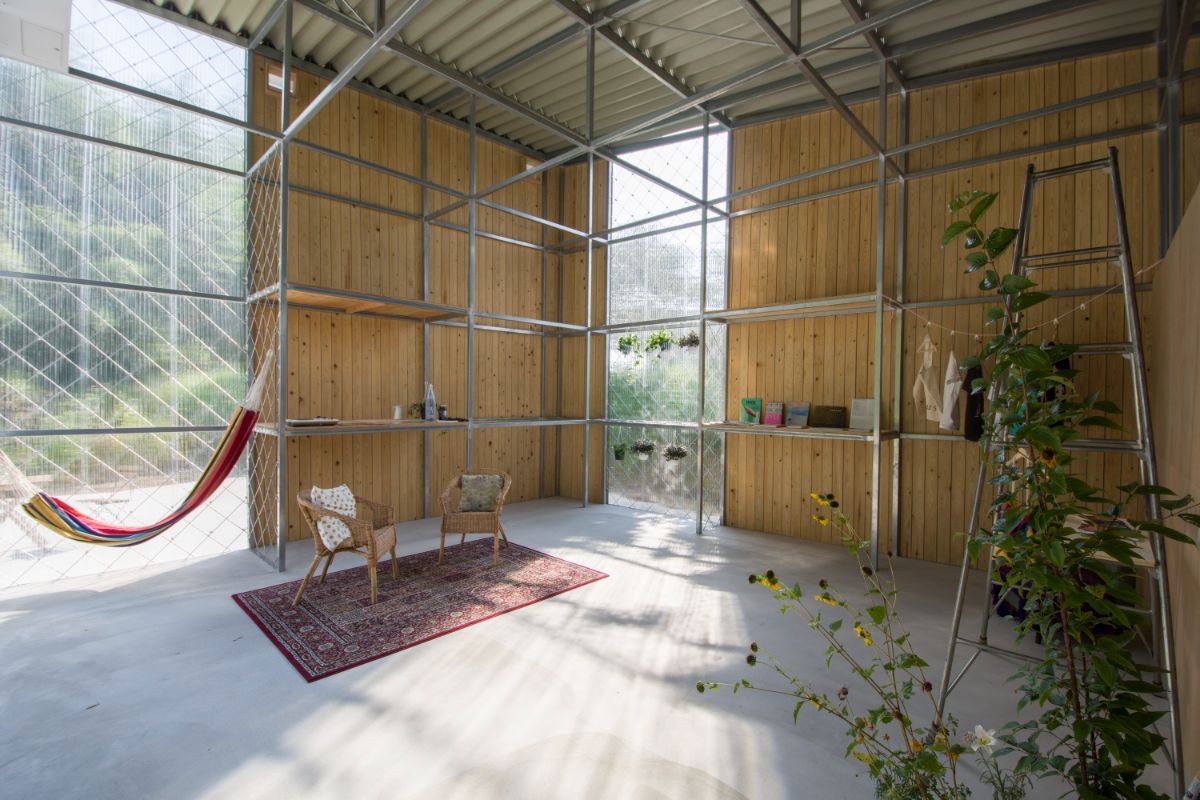 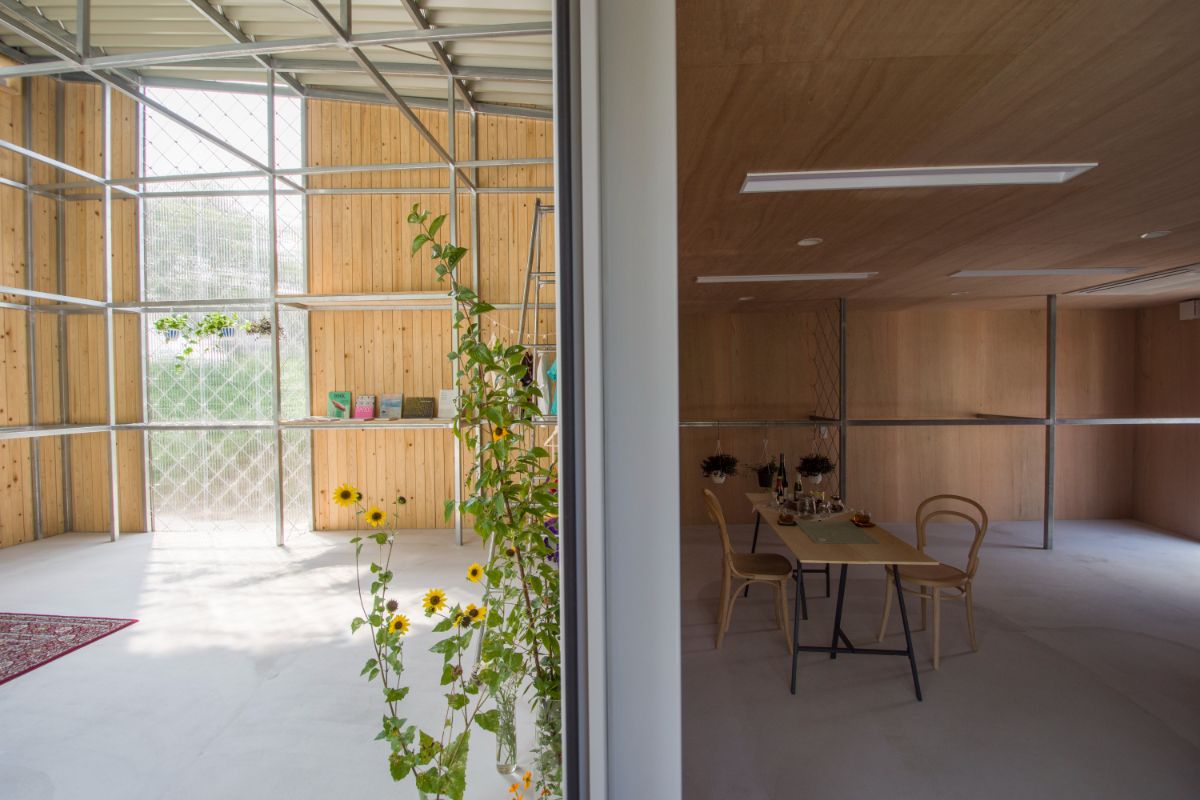 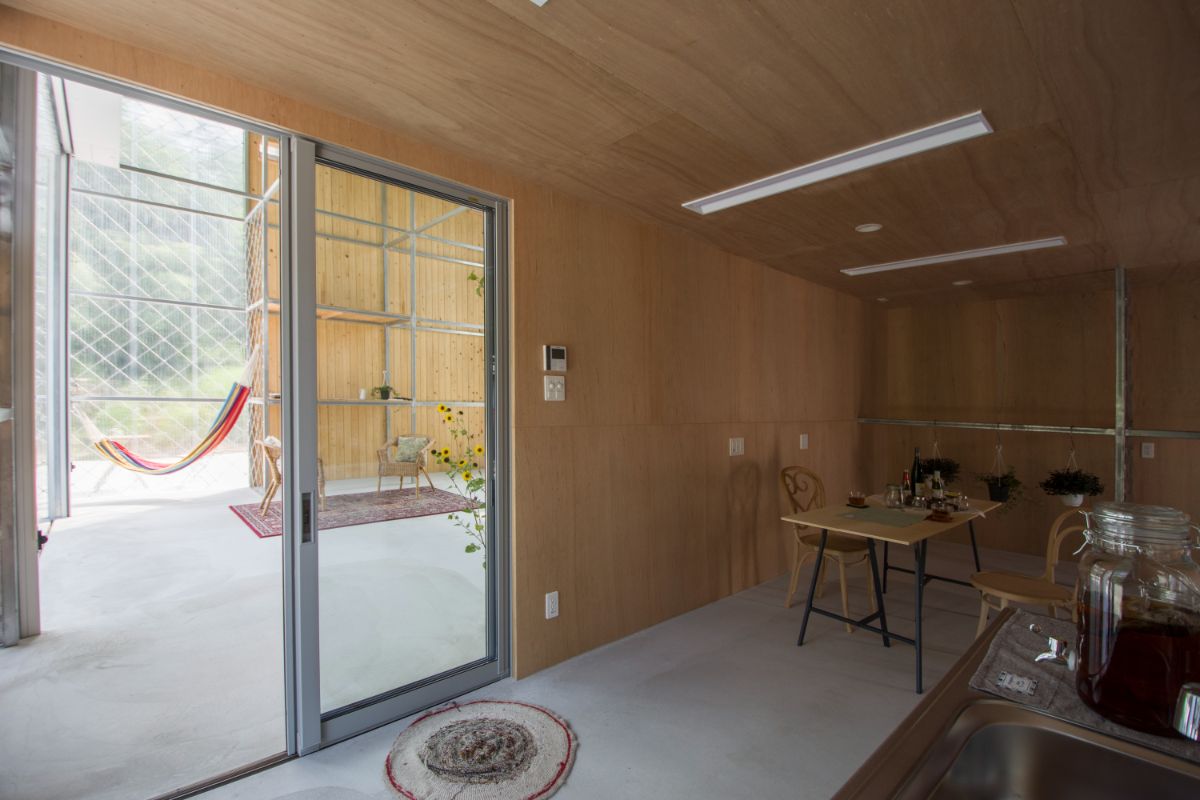 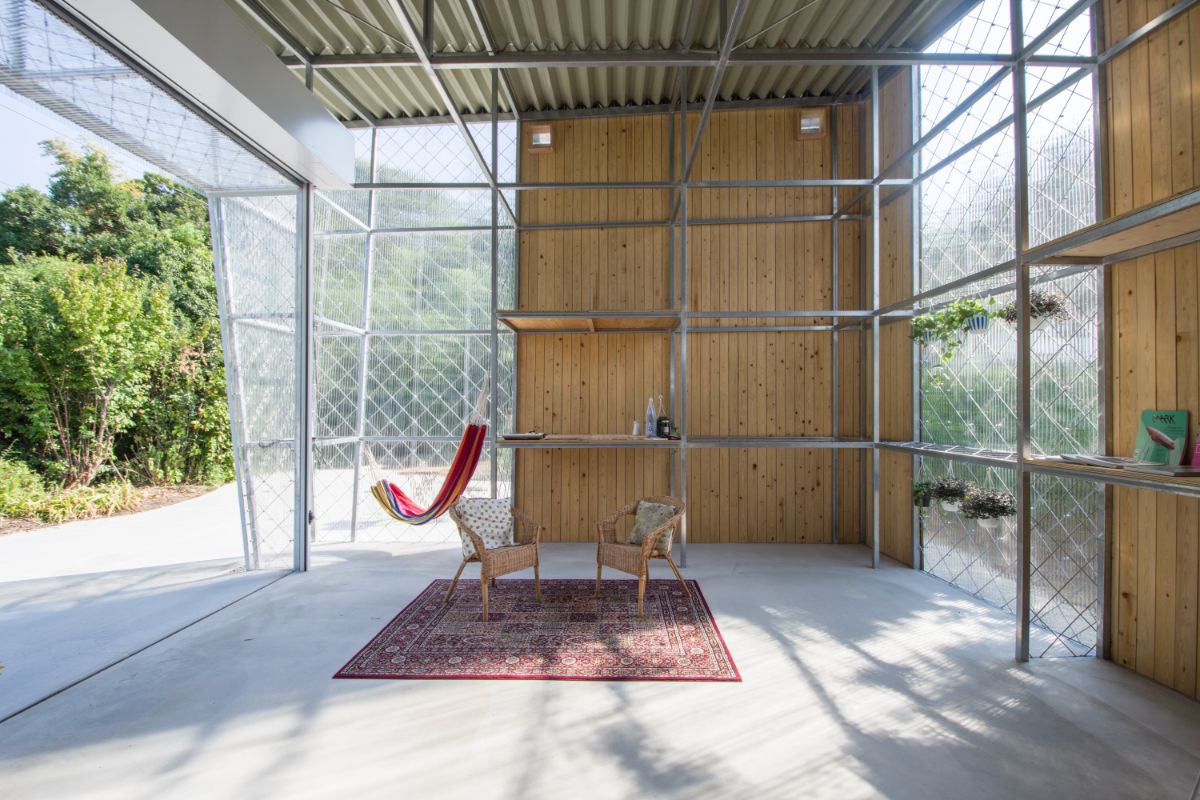 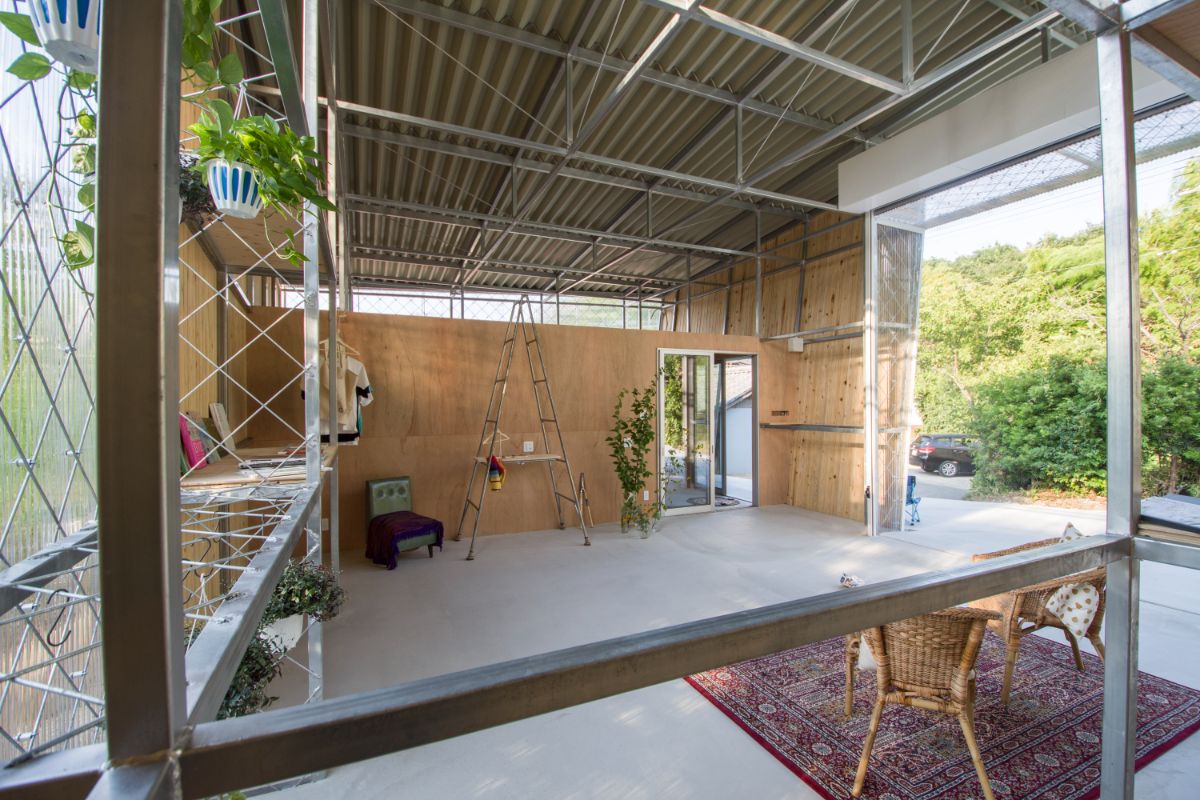 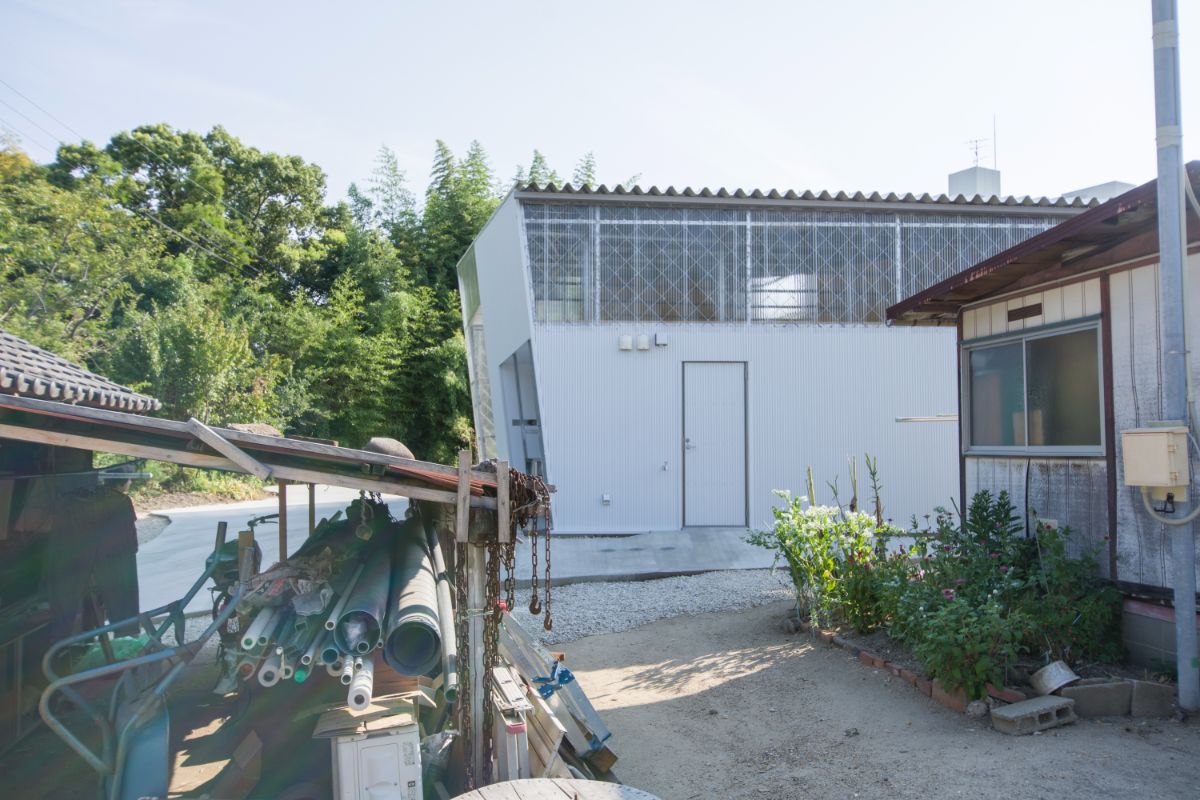 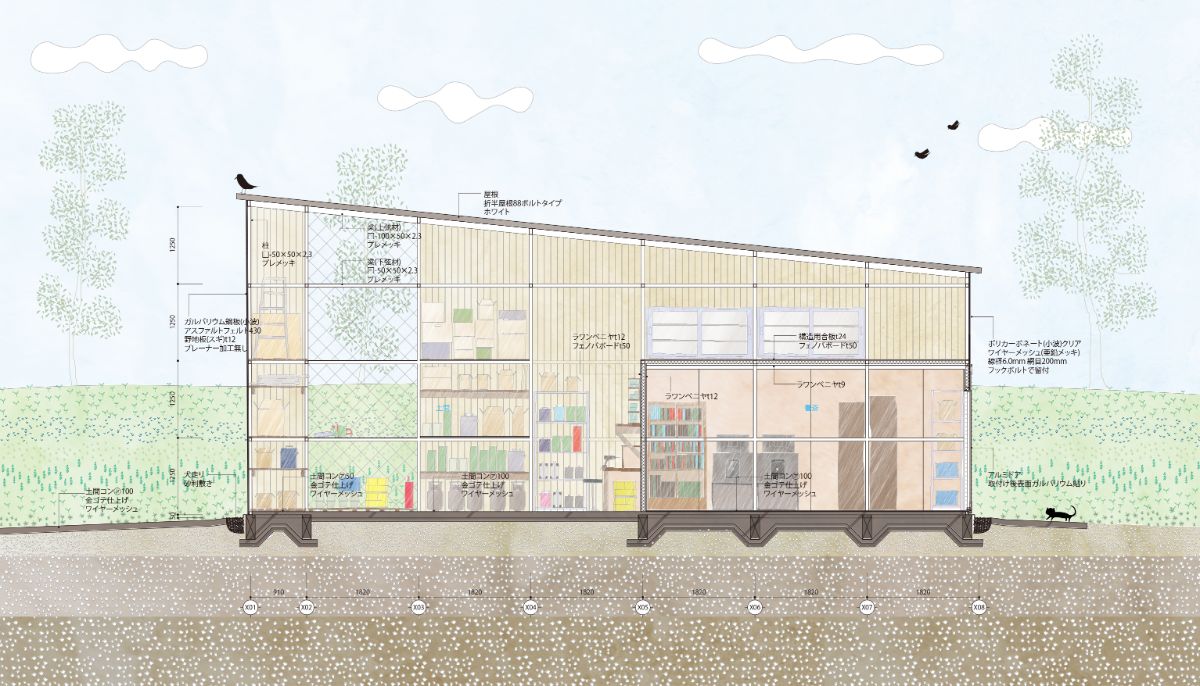 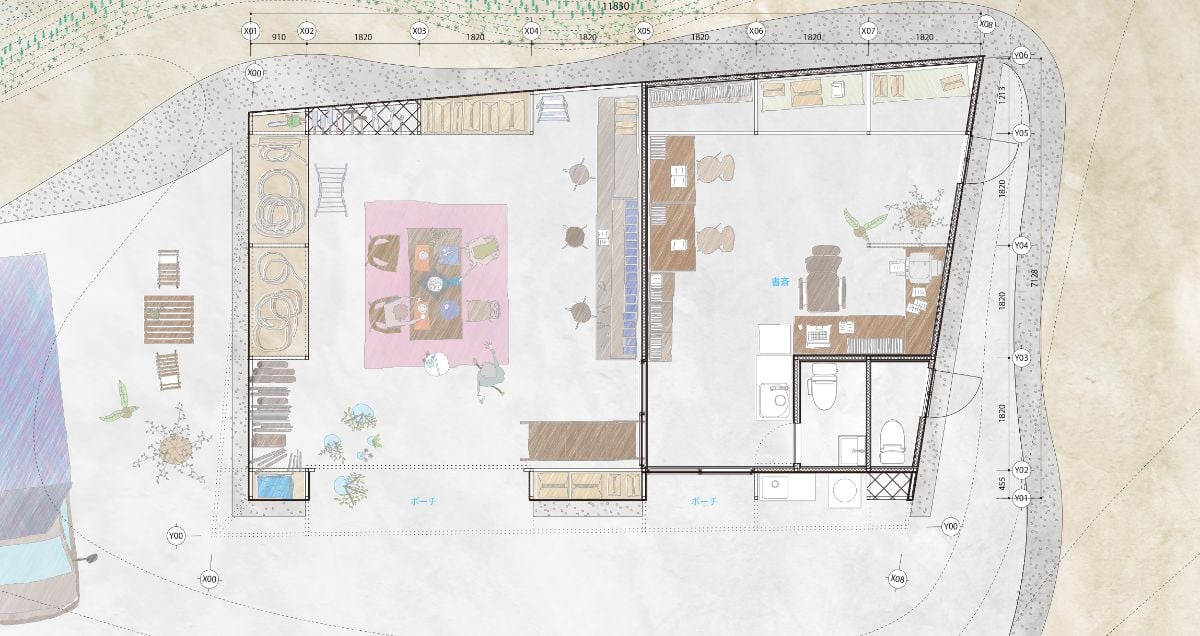 This building is a hut-like house on the outskirts of Aichi Prefecture. The area around the building is a peaceful place with fields and bamboo forests. The planned site has two main houses, and a study hut and an agricultural equipment shed attached to them.

Several decades ago, there was a livestock hut. There, two or three generations live on a single site with multiple buildings. And they live in a way that keeps building renewed in line with their current life, as they thought of on the spot.

A client working as an electrician requested a room such as a study room and dining kitchen, a storage space for materials, a refreshing space with colleagues at work, and a place where local people gather in the event of a disaster. This plan is like adding a life with a larger society to a main house that is used privately.

There is a need for non-family members to gather comfortably and to have a larger scale of storage than residential furniture. So I planned a solarium next to the owner’s room, as large as the budget allowed, using a combination of rough and simple materials.

Specifically, the structural frame is a pre-plated square pipe (□ -50 × 50 × 2.3) as an assembly pillar, and shelves can be added freely between the pillars. Since the pillar is a thin plate material that can be screwed, secondary members such as furring strips can be eliminated.

The base material of the exterior material is a cedar roofing board that is screwed to the intermediate beam and used in the interior without painting. This building uses wire mesh instead of braces as a earthquake-resistant element.

The opening for lighting is made clear by hooking polycarbonate onto this wire mesh without using a sash. The sunroom has a shutter at the entrance, and when it is opened, the room changes to semi-outdoor. I planned that the solarium don’t have insulation.

On the other hand, I planned the room to keep the air volume as small as possible , and to install insulation and air conditioning. I planned the building as large as possible instead of making the room controlled by the equipment smaller.

I think that the life of a resident is not completed in one house (or one function-defined room), but rather it can become rich by enriching its surroundings. The building is like a hut below a house. However, I think that the life through the hut can create more expanse and richness than conventional houses.