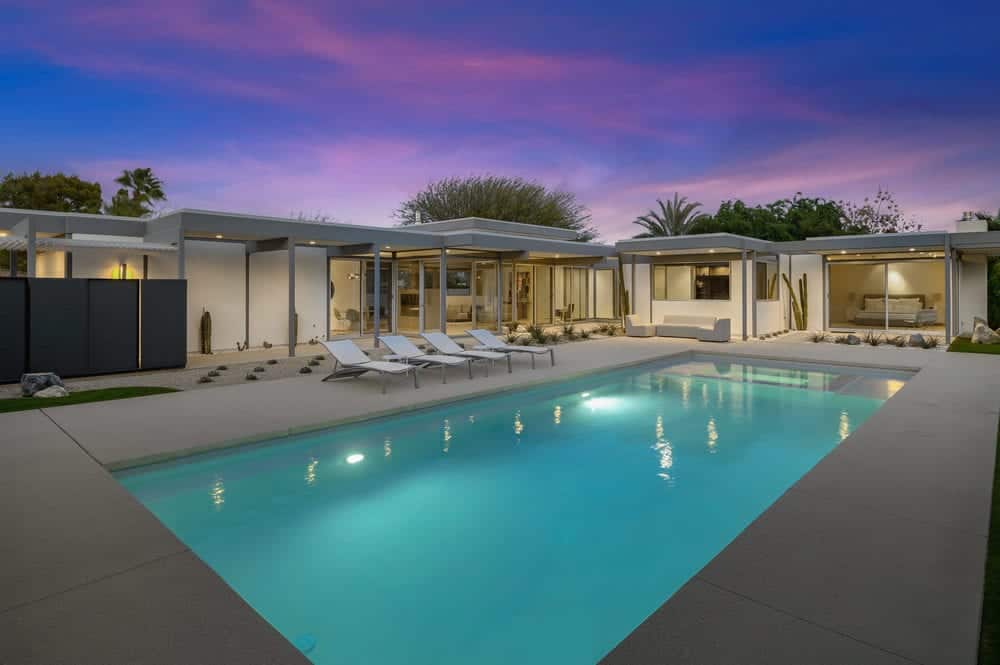 Renowned Mid-Century modern architect Donald Wexler's final home in Palm Springs is on the market for $2.3 million. The 3-bedroom, 3-bathroom, 2,550 square foot steel post-and-beam house is located in sought-after The Movie Colony and features a saltwater pool, traditional galley kitchen, and double-sided fireplace, and is solar-ready.

The Mid-Century Modernist architecture style is iconic throughout the world, but nowhere is it more prized than in southern California. Desert Modernism, as it’s often called, is perfectly suited to the SoCal desert, with a focus on energy efficiency and glass walls that invite the sunshine in.

Donald “Don” Wexler was an extremely influential Mid-Century modern architect. He designed many bespoke structures in his lifetime, including the Palm Springs International Airport, and is widely considered a pioneer of building homes using steel. Wexler passed away in 2015, but before he died — three days before, to be exact — his final home design was approved. “The Last Wexler” is on the market for $2.3 million and its story is just as impressive as its price tag.

The 2,550 square foot, three-bedroom house is located in The Movie Colony, a highly-coveted Palm Springs neighborhood that was once home to A-list celebrities including Marilyn Monroe and Cary Grant. The property itself sits on one half of what was once Frank Sinatra’s Twin Palms estate. It also happens to have been one of the very last undeveloped lots in The Movie Colony. But it almost wasn’t built at all.

In 2000, Wexler drew the original plans for his longtime friend, Marc Sanders. For various reasons, there were significant setbacks in building the house. Sanders eventually grew so frustrated that he sold the lot and didn’t have the home built at all, but he did keep the blueprints. Years later, Sanders became aware that the Sinatra lot had been subdivided and the vacant half was available. This was serendipitous, as Sanders had once lived in the Sinatra House himself. Although he was no longer living in Palm Springs and had no need for the home, Sanders decided to get investors on board and have it built.

By this time, Wexler was 88 years old and long since retired. He also wasn’t particularly well and was eager to see his plans come to life, knowing it would be the last of his designs ever built. The plans had to be completely re-drawn, as building codes and specs had changed considerably in the 15 years since they were originally created. Another issue they ran into was that the house was initially going to sit on a corner lot, but the new one did not. In order to make it work without dramatically altering the blueprints, Wexler shifted the house exactly 45 degrees, an innovative trick he had used throughout his career.

This time around, there were no delays and the City approved the final plans in June 2015, three days before Wexler died. To honor his legacy, the building process was held to extremely high standards. It paid off, because everything about the home screams “Palm Springs Wexler.”

The all-steel, post-and-beam construction home is perfectly situated to maximize both mountain views and shade. In a nod to Wexler’s fondness for efficiency and simple elegance, the house is wired for solar and centers around a reflecting pool. Sustainable, natural materials are used throughout, including birch cabinetry and polished concrete floors. A double-sided fireplace acts as a subtle room divider, separating the living and dining rooms. Keeping it authentically Palm Springs, there’s a saltwater pool out back with traditional desert landscaping. As it’s a true piece of history, the last Wexler home isn’t expected to last long.