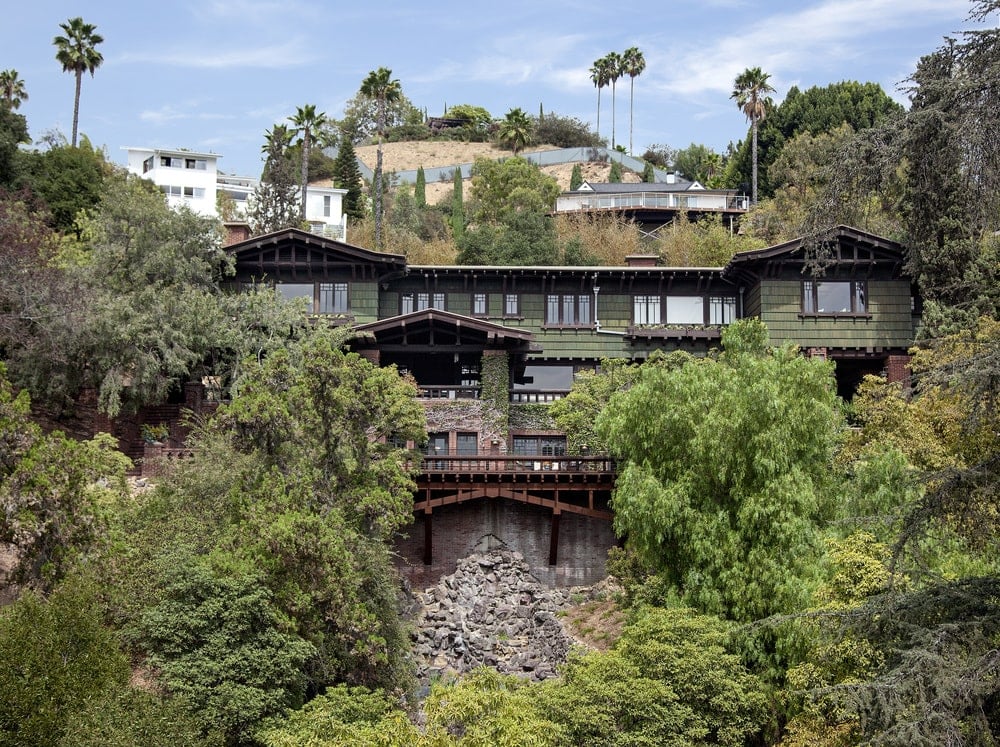 A European-styled Craftsman mansion located on a prestigious perch at the top of the Hollywood Hills is considered as America’s largest Craftsman home. Named Artemesia, the home is now on the market priced at $9.995 million.

The house is measured at 13,290 square feet with eight bedrooms, seven bathrooms, and six Batchelder tile fireplaces. The property consists of three structures including the main house, carriage house, gatehouse, and fireplace pavilion. It also boasts of six terraces, fish pond patio, the kitchen patio, and the carriage house patio.

All photos are used with permission TopTenRealEstateDeals.com

Artemesia, a European-styled Craftsman mansion, is accurately touted as “art you can live in.” After painstaking 25-year restoration by its owner, Leonard Fenton, nothing was neglected, nor was any part of the home rerouted from the original design. Located on a prestigious perch at the top of the Hollywood Hills, the mansion overlooks a wide panorama of city, valley, ocean, and hills. Nestled in almost two acres of a secluded forest, the quiet and tranquility belie its location behind its long gated drive with A-list neighbors close by such as Brad and Jolie just a couple houses down the street.

When the home was originally built in 1913 by Frederick Engstrum, it was built with ecological systems that seem “new” and are expensive today. Some of these early 1900’s innovations were a rainwater collection system that supplied the bathroom showers, a greywater system recycled into the garden, and a tankless water heater that fired only when in use. Who knew that this new fangled money-saver was in use over a hundred years ago?

Engstrum installed a new electric intercom and central vacuuming system and then topped everything off with a fabulous Murray Harris organ – the second-largest residential pipe organ existing in the country today. In addition to restoring almost everything that Engstrum did in the original construction, the current owner has discreetly added network wiring and updated mechanical systems.

The Craftsman home has huge public rooms that can accommodate 500 guests and still have plenty of space and cozy private rooms for family. Overall there are three structures on the property including the main house, carriage house, gatehouse, and fireplace pavilion. Also six terraces including the upper terrace, the ballroom terrace, the sleeping porches with their own Murphy beds, the fish pond patio, the kitchen patio, and the carriage house patio.

Indoors are 13,290 square feet with eight bedrooms including two master suites, seven baths, and six Batchelder tile fireplaces. Fenton was so particular about the restoration that he brought in museum restoration artists to replicate the exact paint color and pattern for tile restoration on one of the fireplaces. For more information.

America’s largest historic Craftsman mansion with the second-largest residential pipe organ. Originally listed at $11.995 million in 2012, the property has been relisted for $9.995 million.