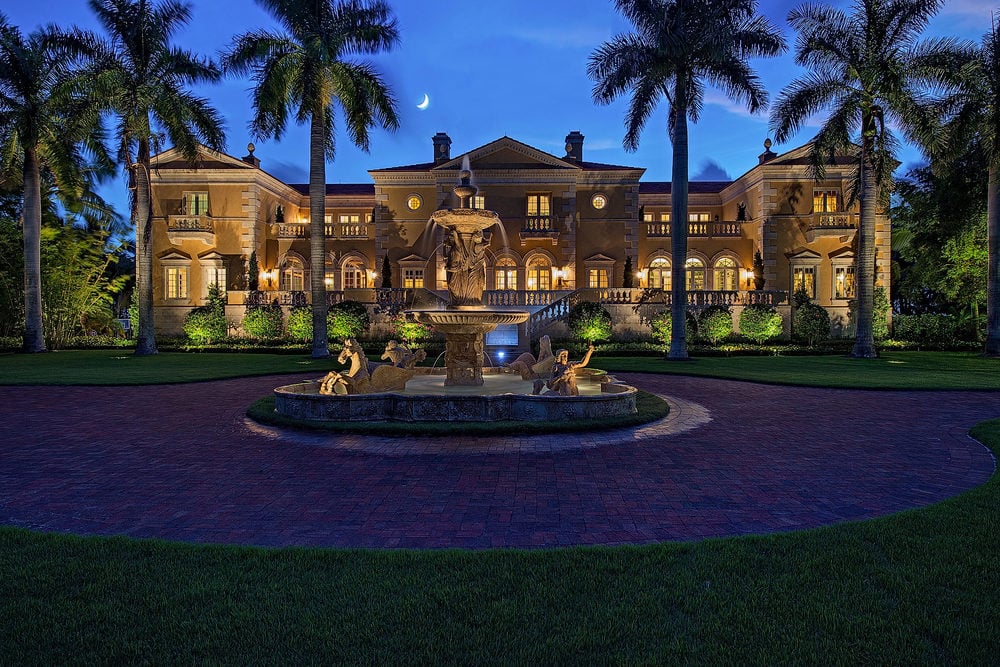 There is a 2009 Island-style Colonial beachfront mansion on 4.8 acres of land with 277 feet of wide white sand beach in Naples, Florida that is now on the market priced at $68 million.

The mansion is measured at 15,996 square feet with five bedrooms, six bathrooms, large formal rooms, family room, large entry foyer with curved staircase and wet bar, large office/conference room, media room, morning room loggia and Gulf loggia with retractable motorized glass walls. It also boasts of a 93-foot terrace with a 66-foot pool with a spa and sun shelf for individual pleasure or entertaining, a gazebo, an outdoor kitchen, a seven-car collector’s garage, and a shower.

The Naples, Florida beachfront mansion that was built back in 2009 is listed by Bill Earls of John R. Wood Properties. 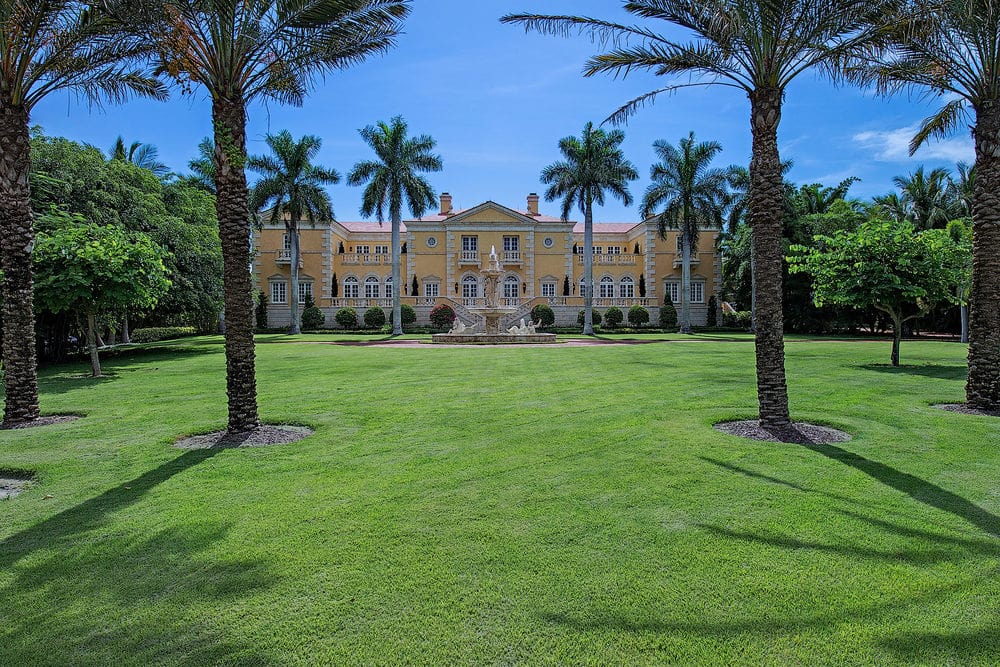 This s a look at the front of the house from the vantage of the large grass lawn. Here you can see the beige tone of the exterior walls that make it stand out against the surrounding landscape of tall tropical trees, grass lawns and shrubs. Image courtesy of Toptenrealestatedeals.com.

This is a look at the interior of the house showcasing the living room. You can see here the patterned ceiling with a golden hue that matches with the chandelier over the coffee table that is flanked by a couple of sofas. Image courtesy of Toptenrealestatedeals.com. 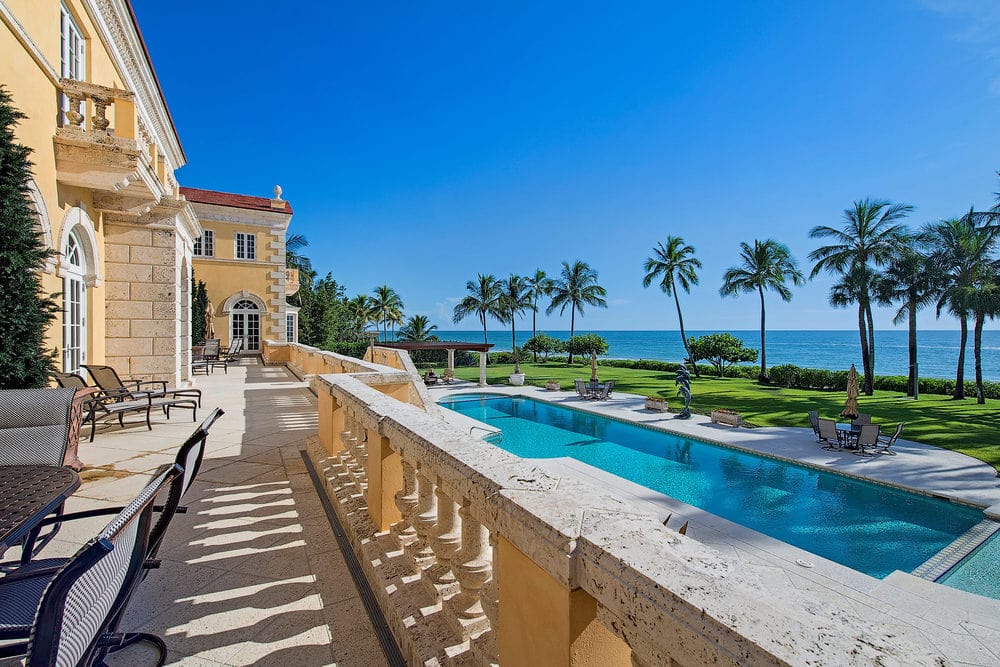 This is the back of the house with a large terrace overlooking the backyard pool. This terrace has concrete railings that match the exterior walls of the house. Image courtesy of Toptenrealestatedeals.com. 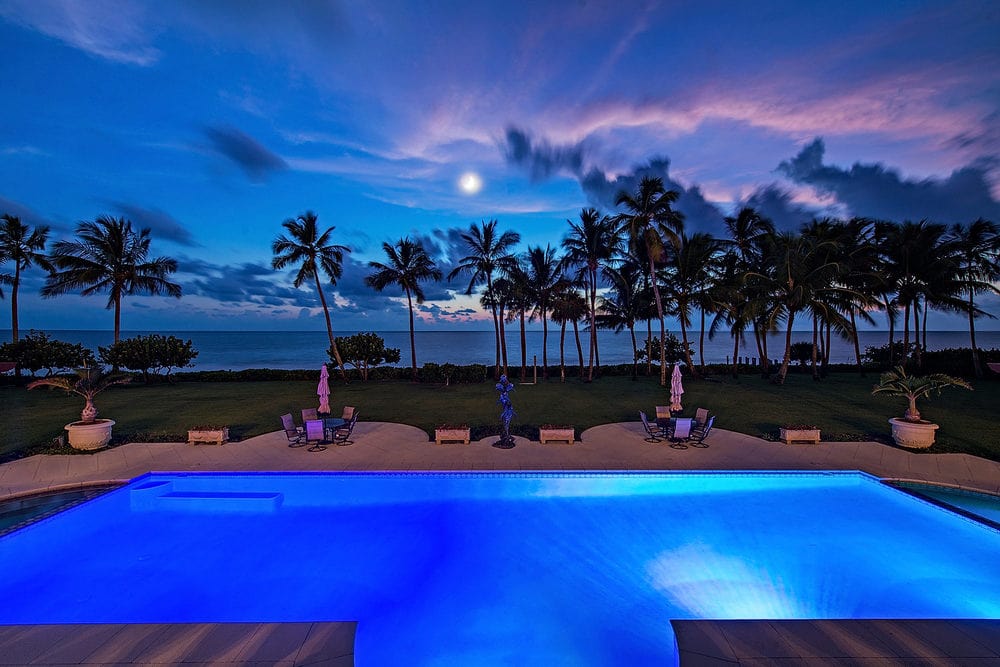 This is a closer look at the swimming pool at the back of the house. This nighttime view showcases the ethereal glow of the pool as well as the view of the ocean with silhouettes of tall tropical trees. Image courtesy of Toptenrealestatedeals.com.

Naples, Florida is no longer the laid back little fishing village that stressed Miamians used as one of their prized getaways from their hectic city lives. It was a perfect distance across the upper Everglades on Tamiami Trail where flocks of migrating birds would tousle each other for standing room and the Seminole Indian villages still had their wood stilt homes near the highway where one could observe their daily life in passing.

Once on the outskirts of Naples, one could grab a bite at the crab shack, where the Tin City shops are today, before going to the well-kept but inexpensive motel with kitchenette on the quiet street across from the Naples pier. But that was in the 1970s when the Hippie culture had started turning into the new breed of go-getter Yuppies.

Once Naples was discovered by the wealthy and the famous, the speed of growth was astounding. The building of Interstate 75 helped with that growth and today’s Naples, with its pristine ten miles of white powder beach, is one of the wealthiest cities in the U.S. with the second-highest proportion of millionaires per capita in the country.

Along with the wealth came upscale shopping, expansion of the cultural arts, and fine restaurants. Residents now include a multitude of corporate moguls, sports stars and film stars with many homes priced well over $40 million.

Overlooking the Gulf is a 93-foot terrace with a 66-foot pool with spa and sun shelf for individual pleasure or entertaining, a gazebo, outdoor kitchen, and shower. The mansion is set back from the road with a large motor court and water feature with a seven-car collector’s garage. Bill Earls of John R. Woods Properties is the listing agent. For more information.