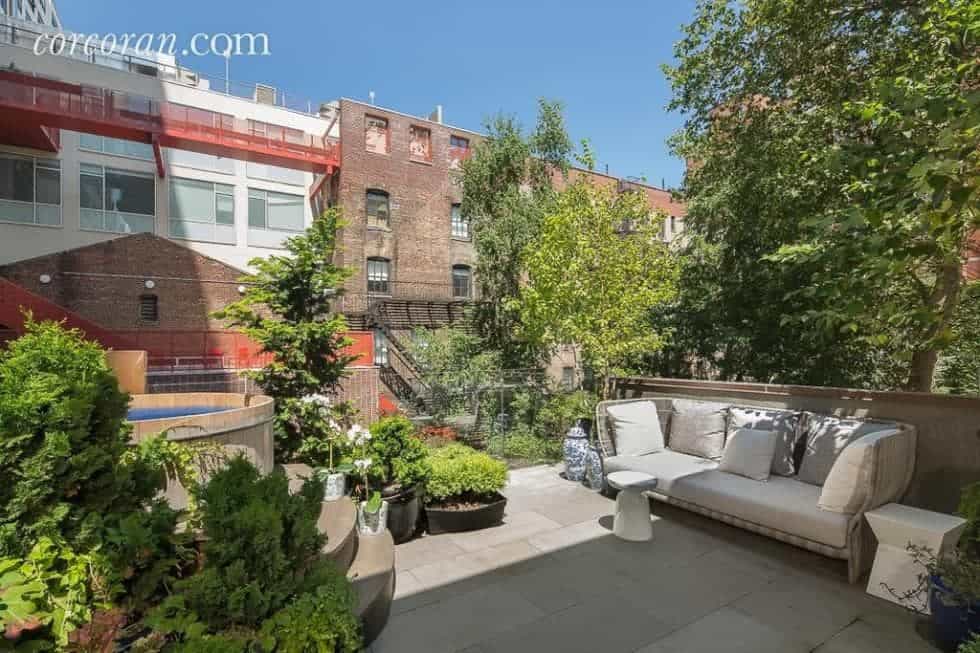 The house is measured at 20 feet wide and 100 feet deep with four levels, five bedrooms, and six bathrooms. The house boasts of a two-story glass curtain wall, six wood-burning fireplaces, formal rooms, a windowed eat-in kitchen, a media room, seven skylights, and a large terrace with a custom Ofuro Japanese soaking tub and Jacuzzi. The house also has exteriors finished in bluestone, a large landscaped garden with a pond, and an outdoor kitchen.

Number 27 of the Charlton-King-Vandam Historic District in Soho, New York is listed under the Corcoran Group. 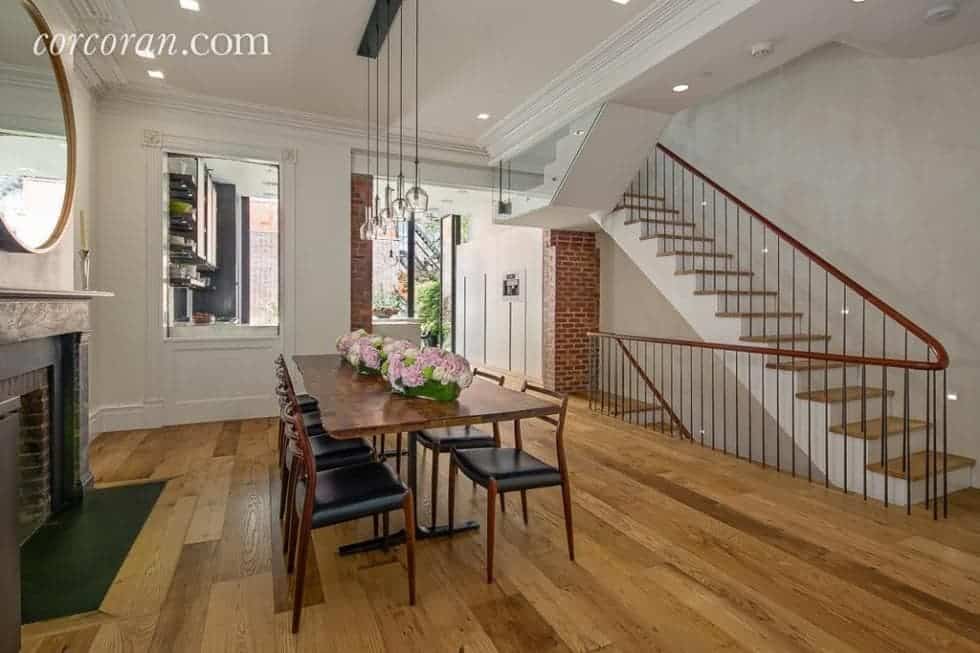 This is the dining room of the townhome that has a long wooden dining table surrounded by cushioned chairs that match the tone of the hardwood flooring. and the banisters of the stairs. Image courtesy of Toptenrealestatedeals.com. 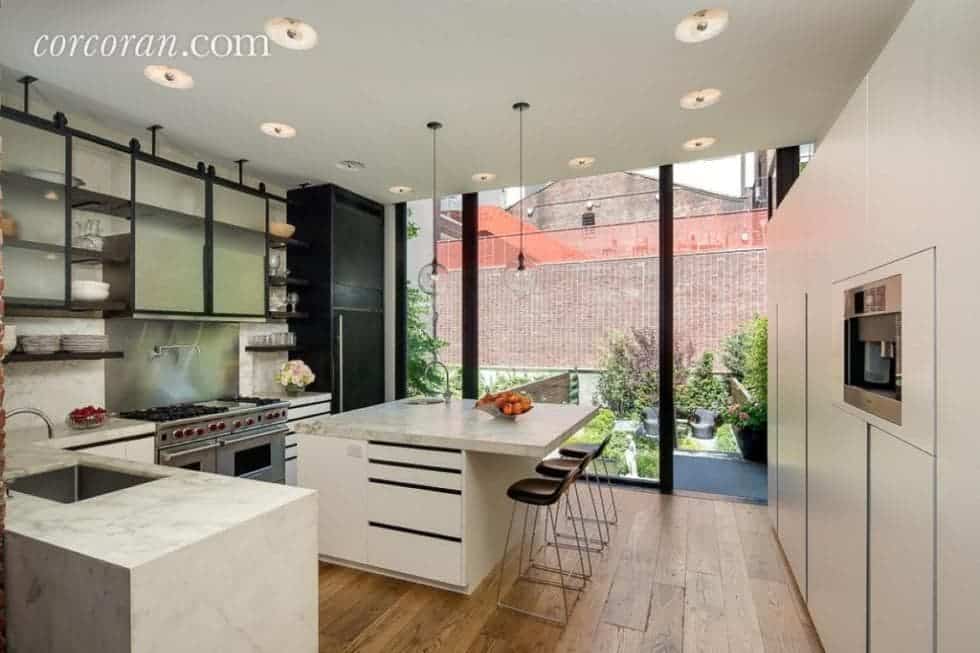 This is a bright kitchen that has a couple of white kitchen islands that stand out against the hardwood flooring brightened by the glass wall. Image courtesy of Toptenrealestatedeals.com. 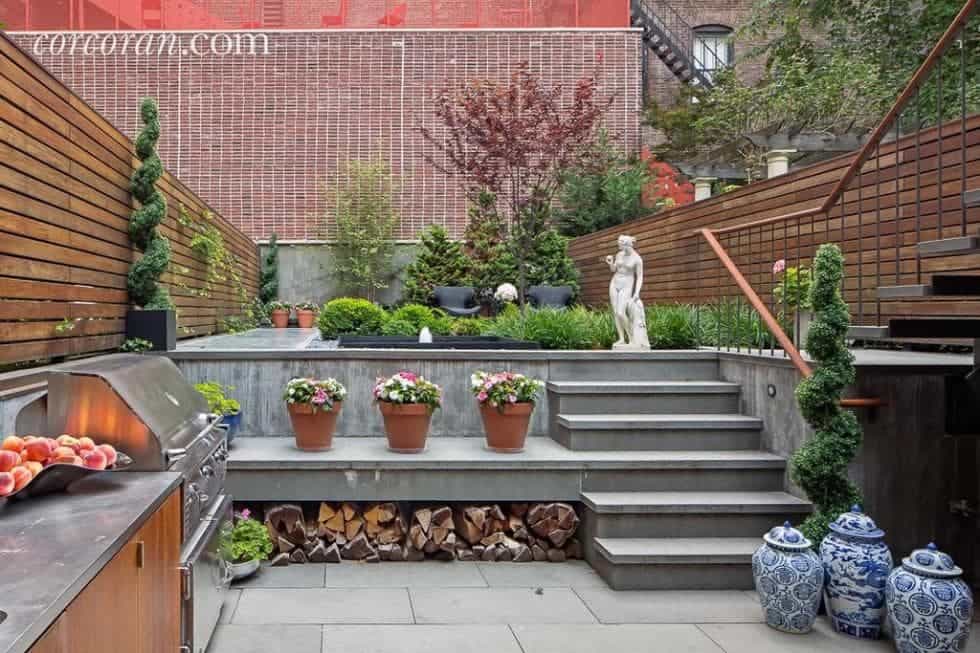 This is the outdoor kitchen that has a grilling station adorned with potted plants, various landscape and small vases and statuette. Image courtesy of Toptenrealestatedeals.com.

A series of three streets in the Soho district of New York City has been preserved as the Charlton-King-Vandam Historic District and walking through the tree-lined streets is like stepping back into the early 19th century. According to the Landmarks Preservation Commission, the homes in this historic district are all that remains of a city plan conceived and mapped in 1797.

The Federal-style townhouses were built between 1820 and 1829 and developed by John Jacob Astor from a portion of a large country estate, formerly known as Richmond Hill. On Vandam Street, four townhouses including # 27, now for sale, remain in the close-to-original state. Their pitched roofs and dormers, their delicately contrived doorways, and their ironwork are representative of the classic and simple Federal style.

Number 27 was built in 1823 and much later was owned by world-renowned choreographer Paul Taylor, who divided it into four units. When he sold it to the current owners, they did a full renovation turning it back into a single-family home and keeping the historical elements, adding updates and technology placing it squarely in the 21st century.

The exterior spaces, all finished in bluestone, include a large landscaped garden with a pond and an outdoor kitchen finished in teak with a grill, refrigerator, and sink. There is a new copper roof, new Pella insulated double-hung wood windows, new cast-iron, and copper piping. Inside are the original six restored wood-burning fireplaces, formal rooms, windowed eat-in kitchen, and media room.