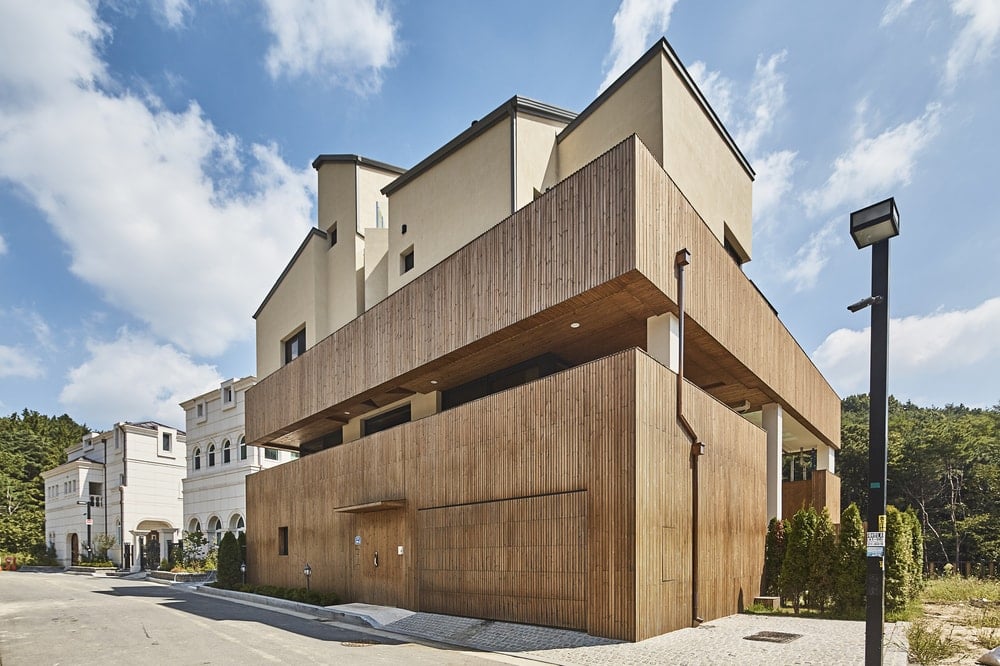 Located at a newly built residential complex in the southwestern outskirts of Daejeon City, the Urban Hamlet is built for four children and their parents. The design uses a novel approach to the use of form and space by experimenting with the significance of what is private and public in a way that captures the needs and the essence of the modern family.

The house consists of three levels, where the first and third contain rooms that serve specific functions and the entire second floor is an open multipurpose space. On the first floor surrounding a patio are a garage, laundry room, living room, kitchen, dining room, and a guest room that doubles as a tea room and other multipurpose spaces. On the third floor, six duplex bedrooms surround a shared family room that connects to a jacuzzi and an open terrace swimming pool that faces the mountains to the south. In each of the bedrooms, the upper level of the duplex leads to a small rooftop space for family gatherings. The entire second floor is an open area whose ceiling weight is supported by a core that contains the elevator and stairs. This core is covered by media shelves, a tv stand, a fireplace, a projector screen, and a desk.

As the boundaries between home and modern life become blurred, and individuality and alienation become more common traits among those in today’s communities, there is a need to address how this will transform social interaction at all levels of society. Residential architecture is no exception. It must create more than just ‘living machines’, as it is tasked with helping people navigate through what it means to be in a modern family. During the approximately twenty years that it takes for the children to come of age, the house must be more than a living machine that supplies function and comfort. It must also be a vessel that holds its inhabitants’ most cherished memories and a facilitator of the relationships between each family member.

It is generally the case that family residences contain individual spaces such as bedrooms, shared areas such as the dining room, and spaces for recreation and leisure. As the title Urban Hamlet would suggest, these individual spaces are small houses in their own right, with their own small roofs and forming a small village perched on the main roof of the house. The individual roofs form a boundary that respects the privacy of each family member, allowing them to maintain their personal and independent worlds within their bedroom. Even so, these worlds congregate as a small community centered on a part of the main roof that bears resemblance to a village plaza.

Such a foundation for a community of love and respect is complemented by the second floor, where the open space provides a full immersion with nature via an unobstructed, panoramic view of the landscape. To understand the function of this area, one must look not to western notions of living, dining and kitchen spaces (LDK) where the three are distinct, but to classical Korean architecture where the boundaries between LDK are blurred. The second floor is in a sense a daecheongmaru, which was traditionally used as an open-air space connecting the bedrooms, a dining room for the family during hot summers and a reception area for guests. It is where parents did laundry by hand, where children napped or read, etc., where each generation shared the same space and the western notion of separating living, dining, and cooking did not apply. In a modern context, the room is multipurpose in every sense of the word. The media core which is placed on this floor may be an antidote to a widening generation gap, as those who are used to playing on electronic devices, watching tv, and doing leisurely activities that involve neither, will all be using the same space.

In the Urban Hamlet, the vertical circulation is condensed as if it were a daecheongmaru rotated 90 degrees and fitted with a glass box. Just as the daecheongmaru connects different rooms and provides a horizontal view of the surrounding world, this glass box connects the floors and displays a vertical panorama that spans the sky. The result is a vertical space that is vacant but seems full, owing to an unboundedness that gives the impression from the inside that it is a part of the natural landscape.

The urban hamlet is thus a vessel for the memories of a family’s first 20 years, a temporal microcosm that goes beyond simple physical architectural function to also oversee the drama of everyday life; it is a space that allows its inhabitants to preserve the modern family’s closeness within itself and connectedness to the outside world.