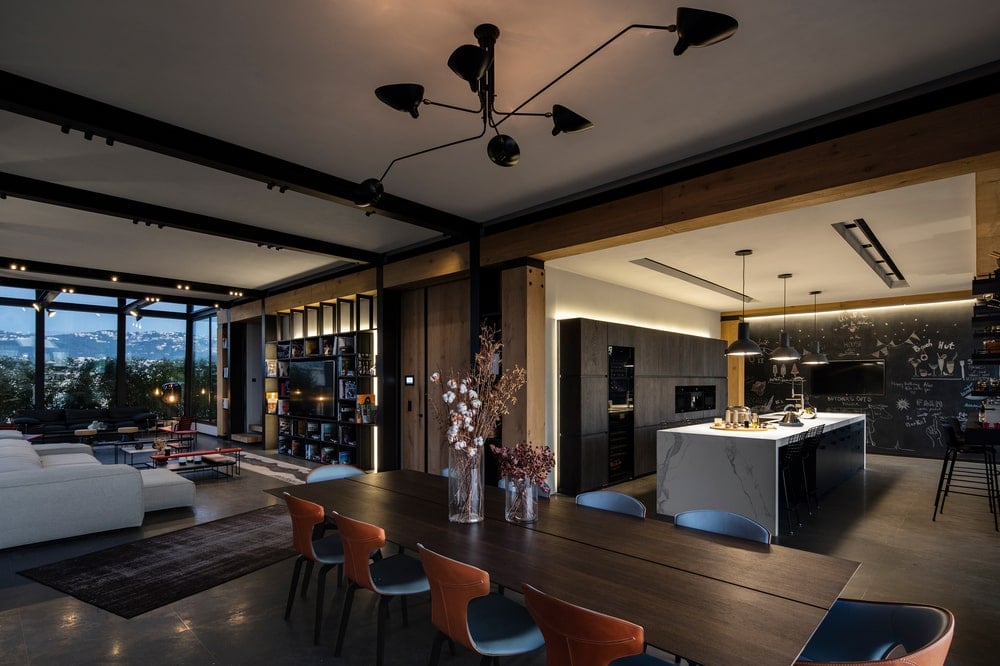 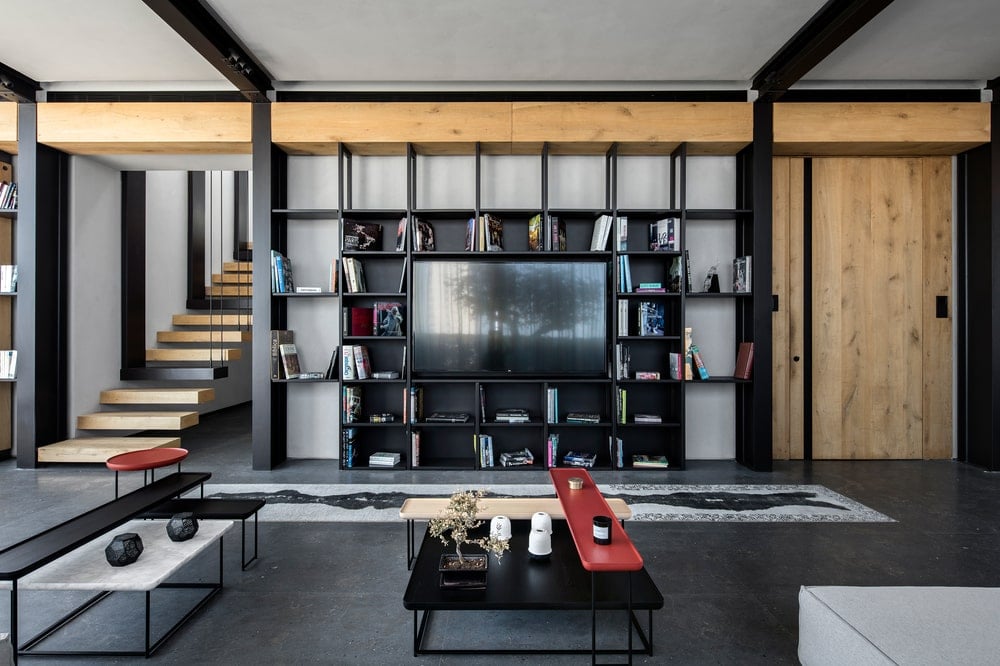 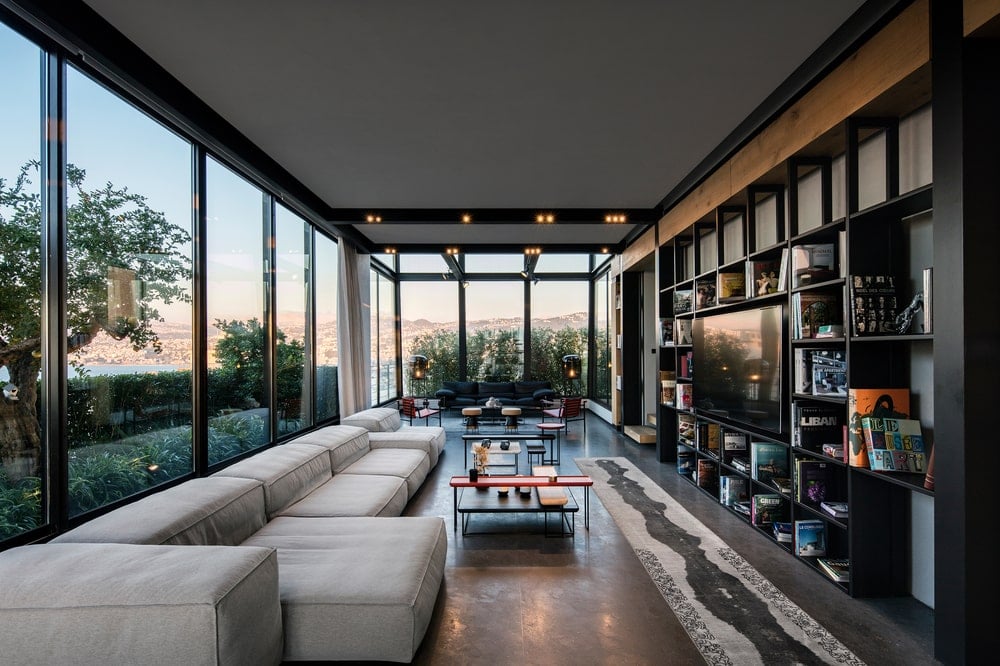 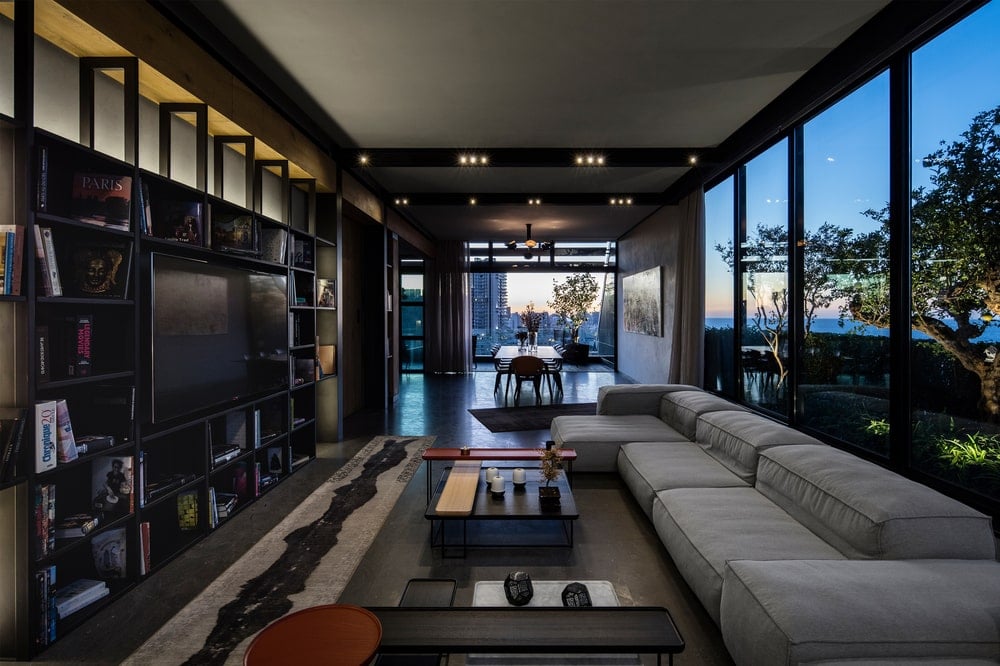 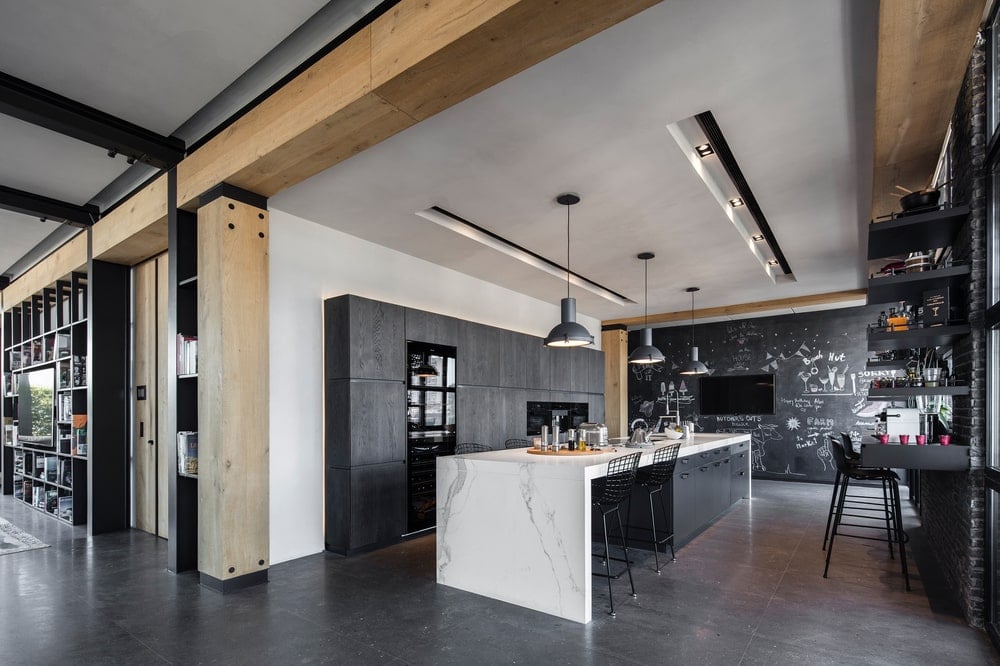 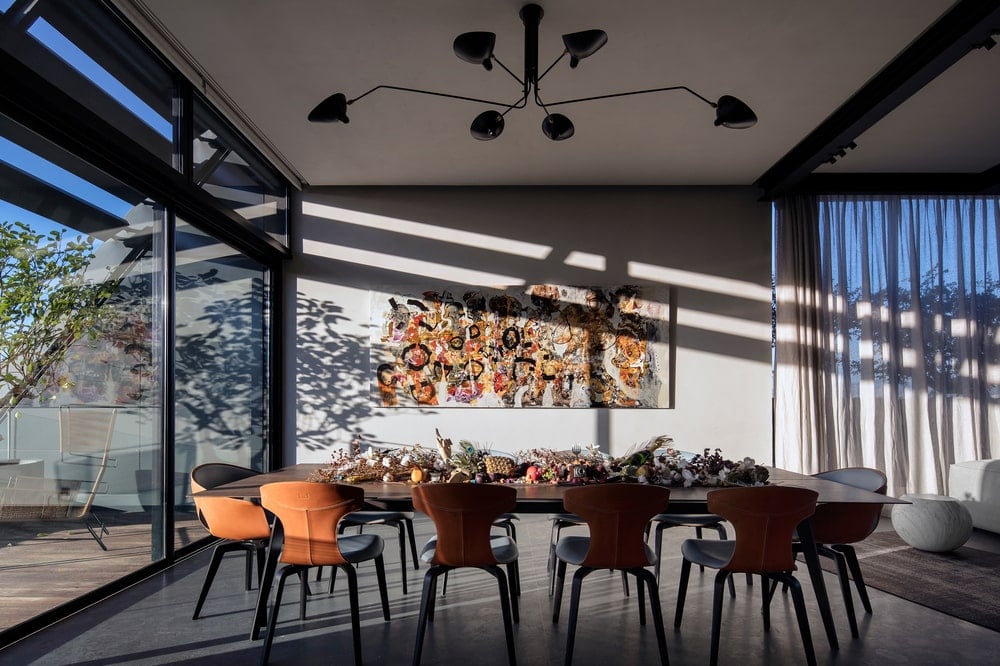 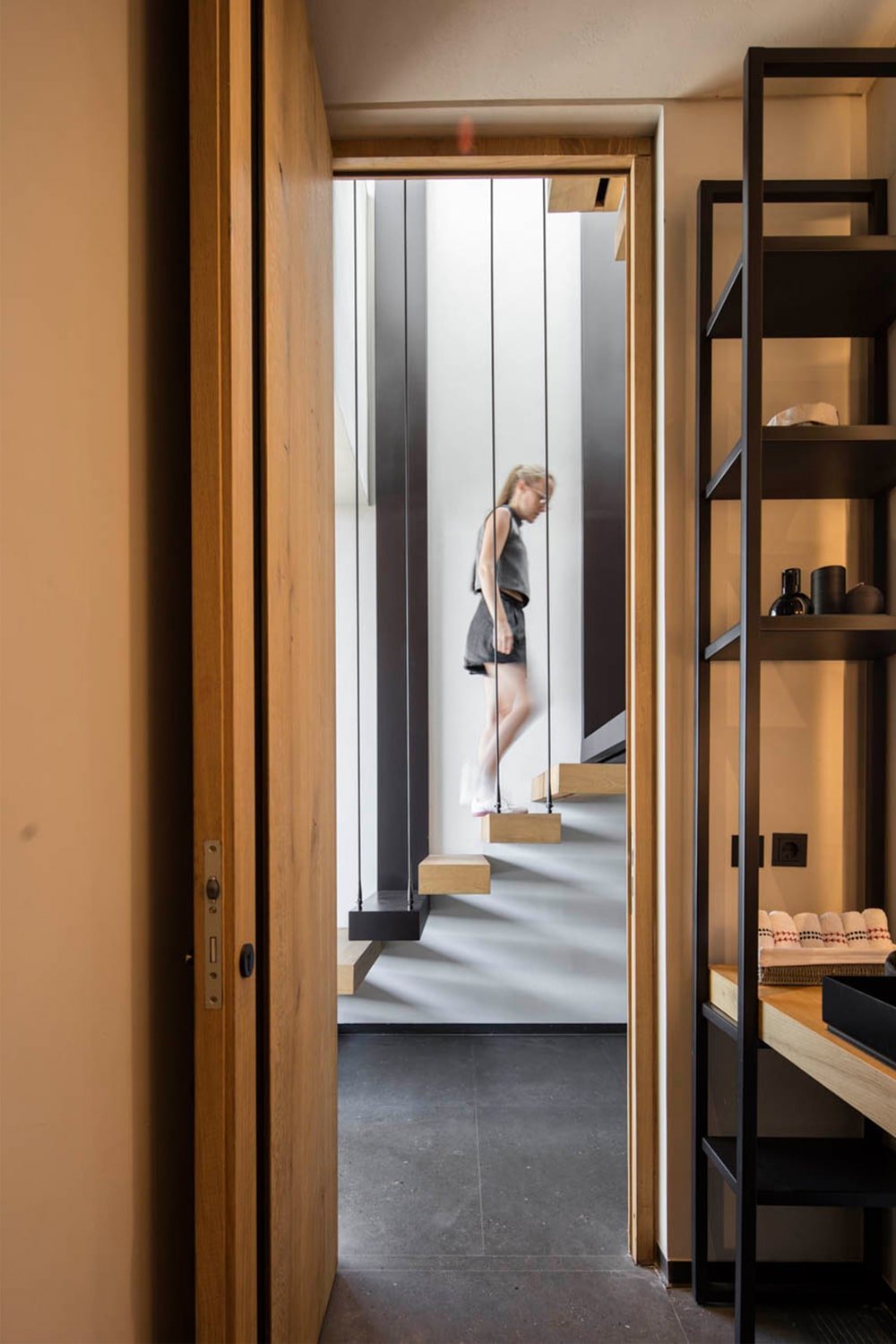 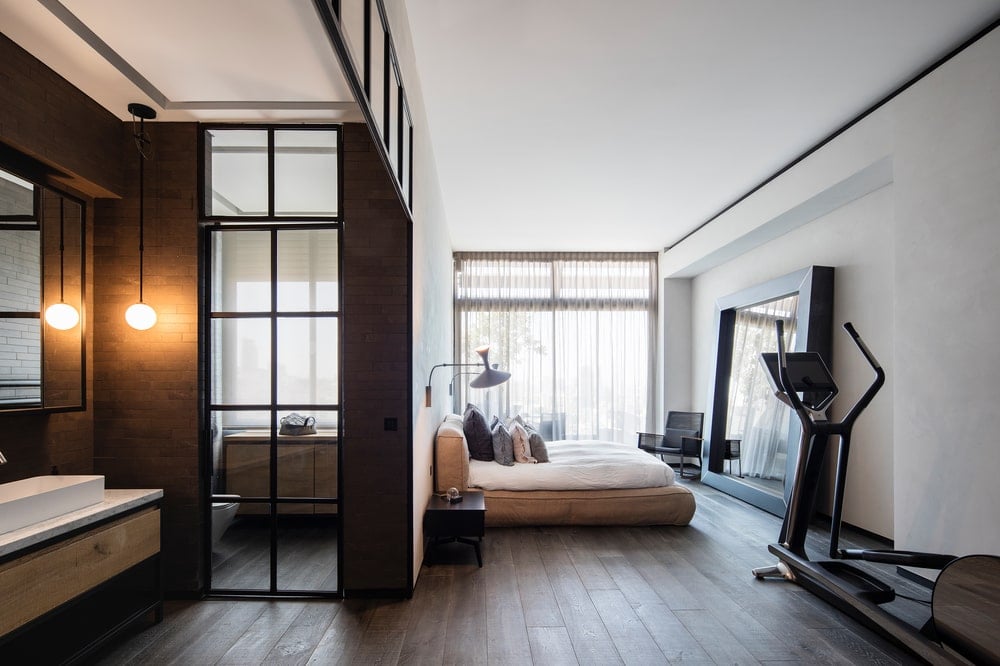 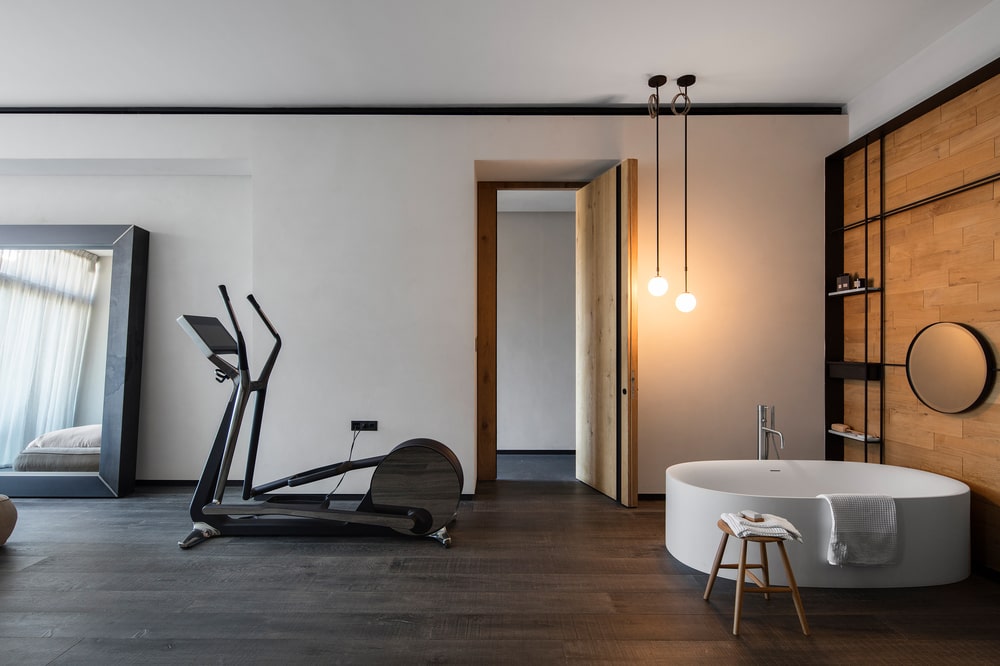 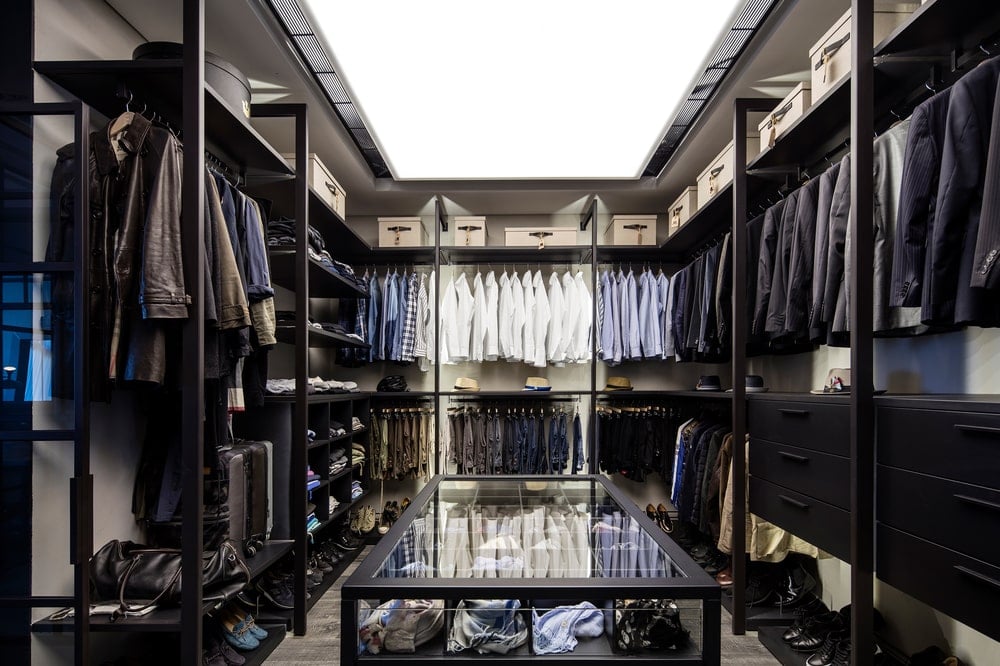 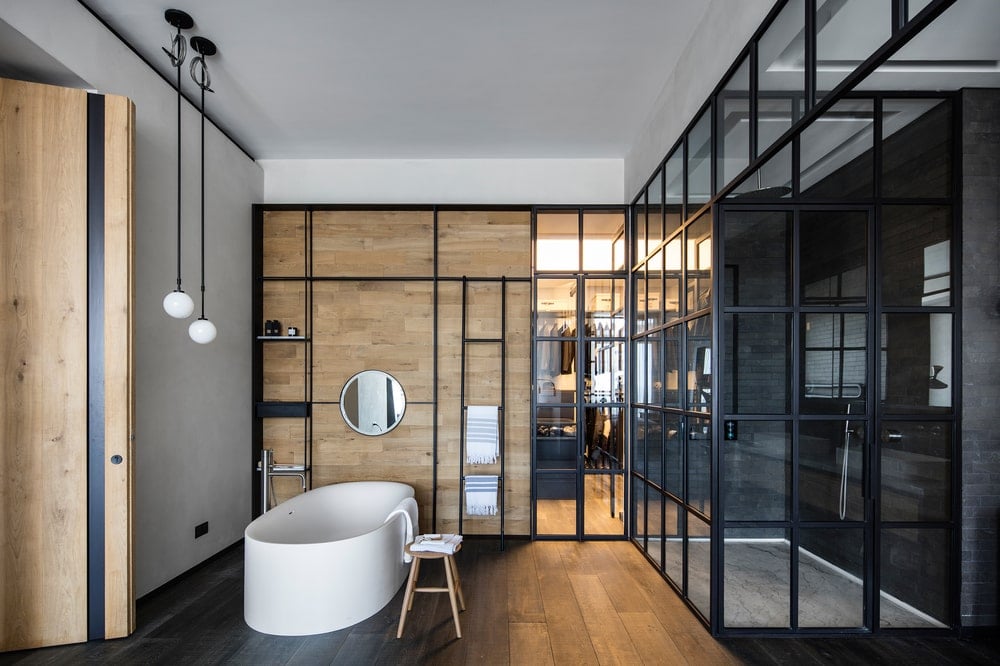 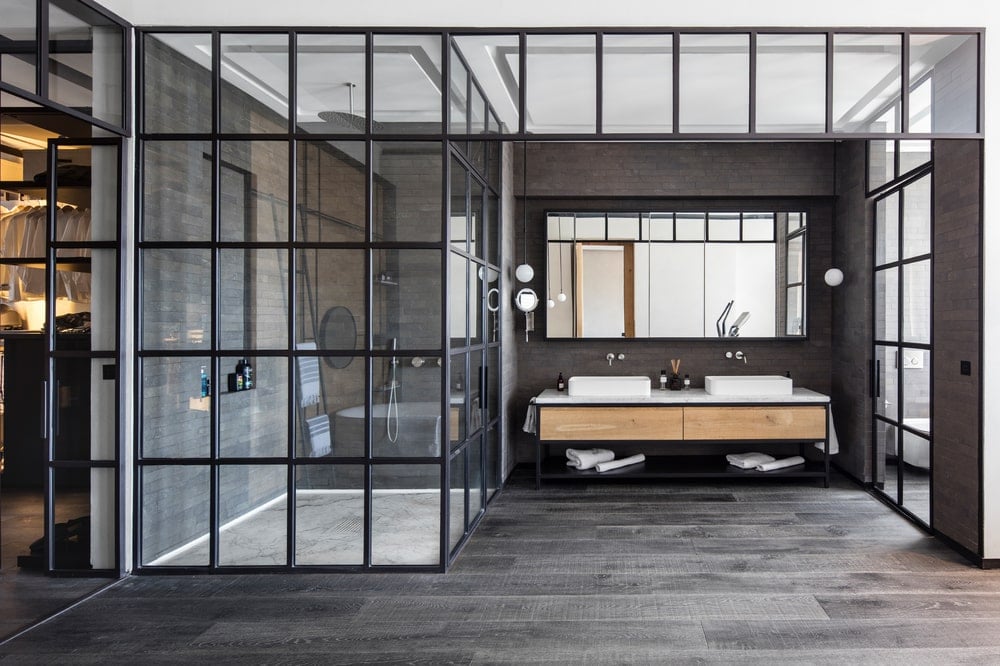 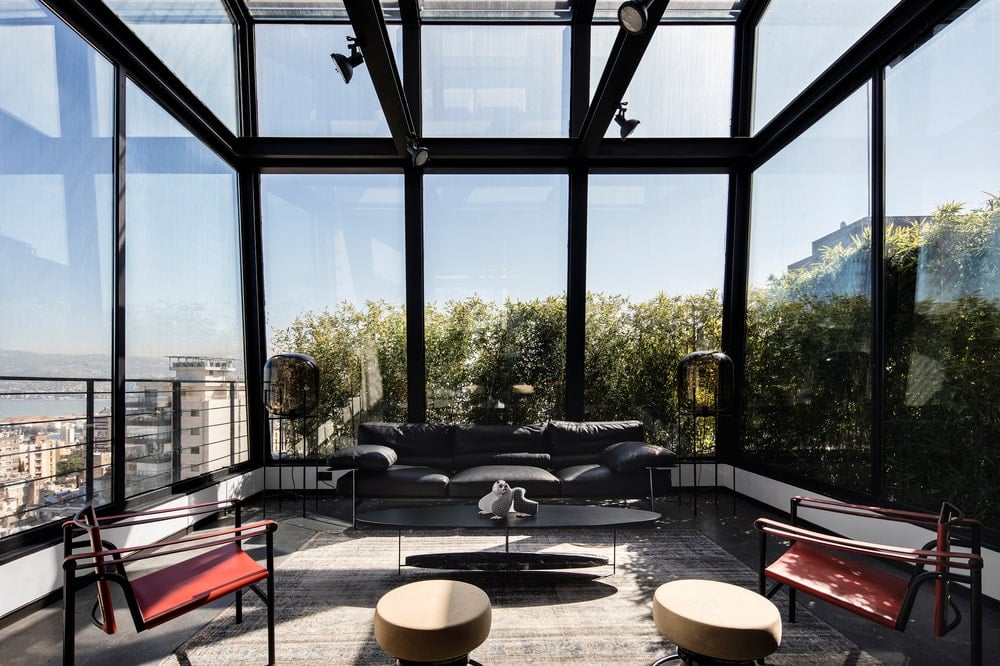 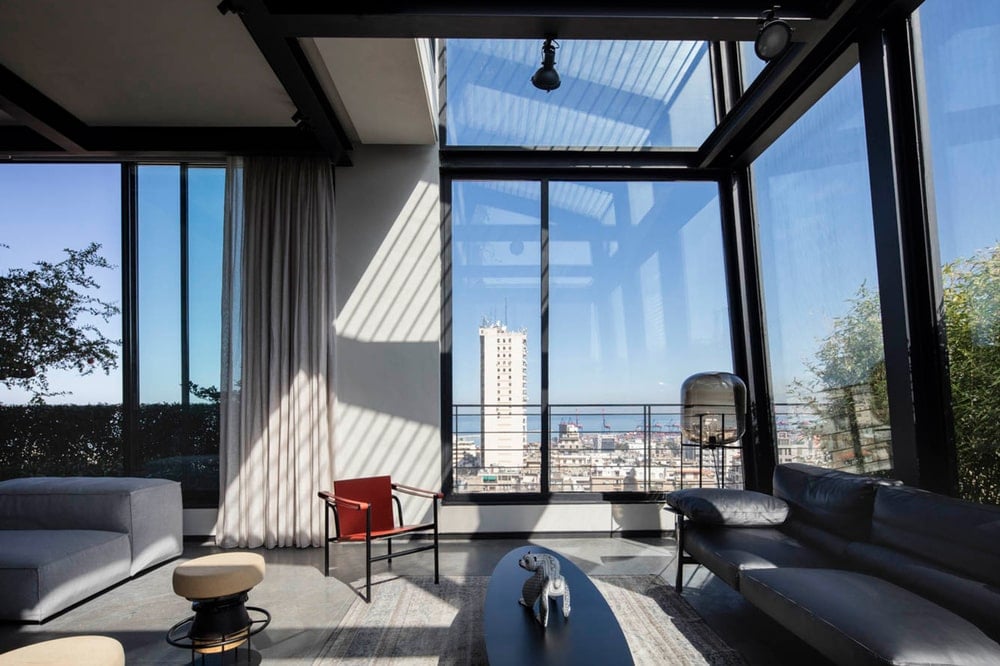 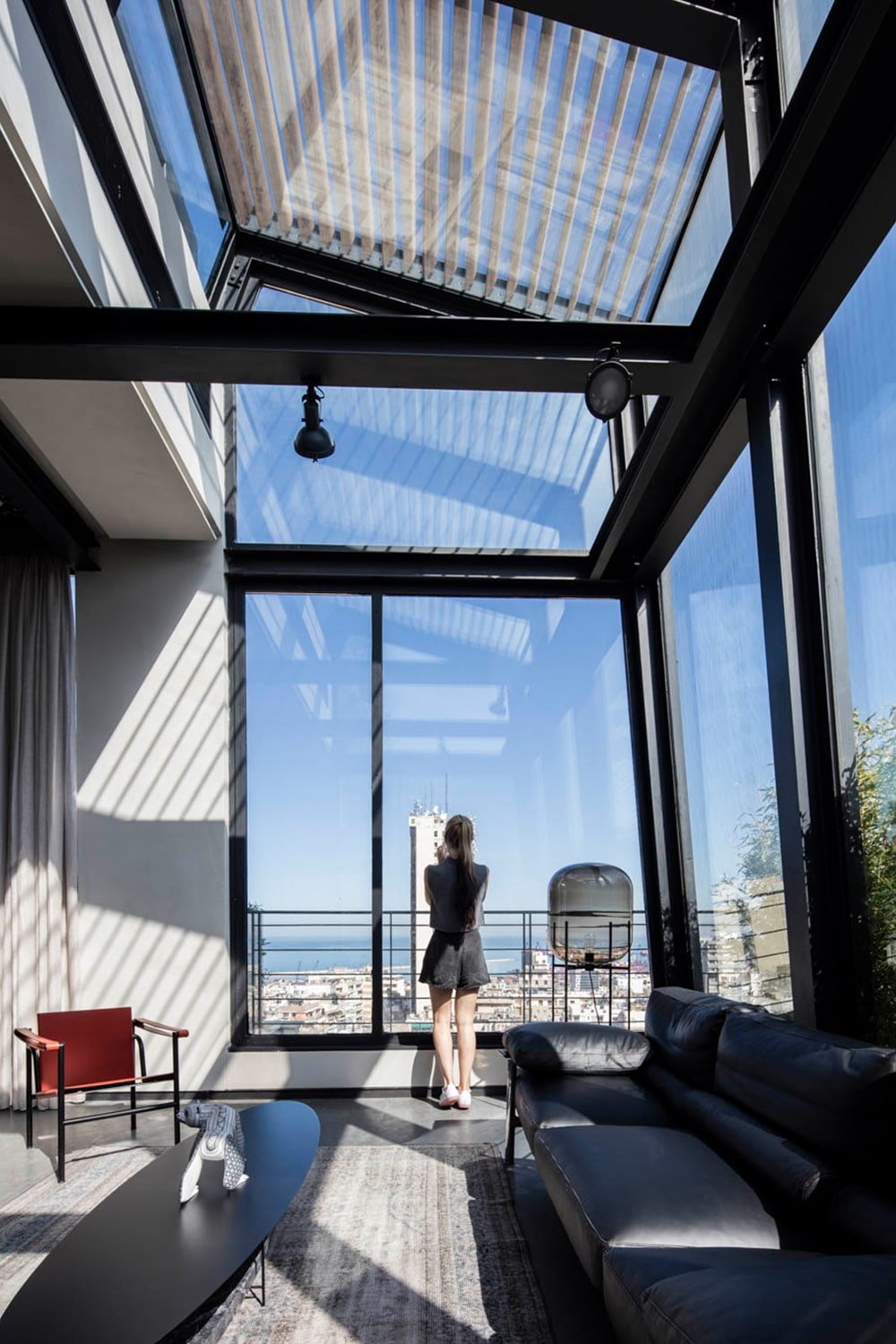 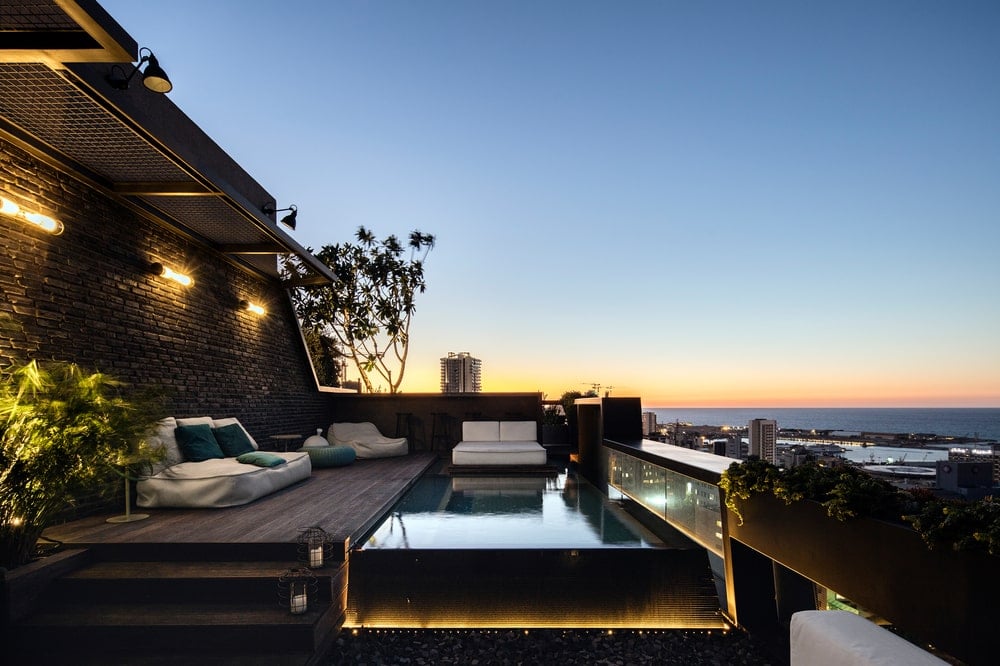 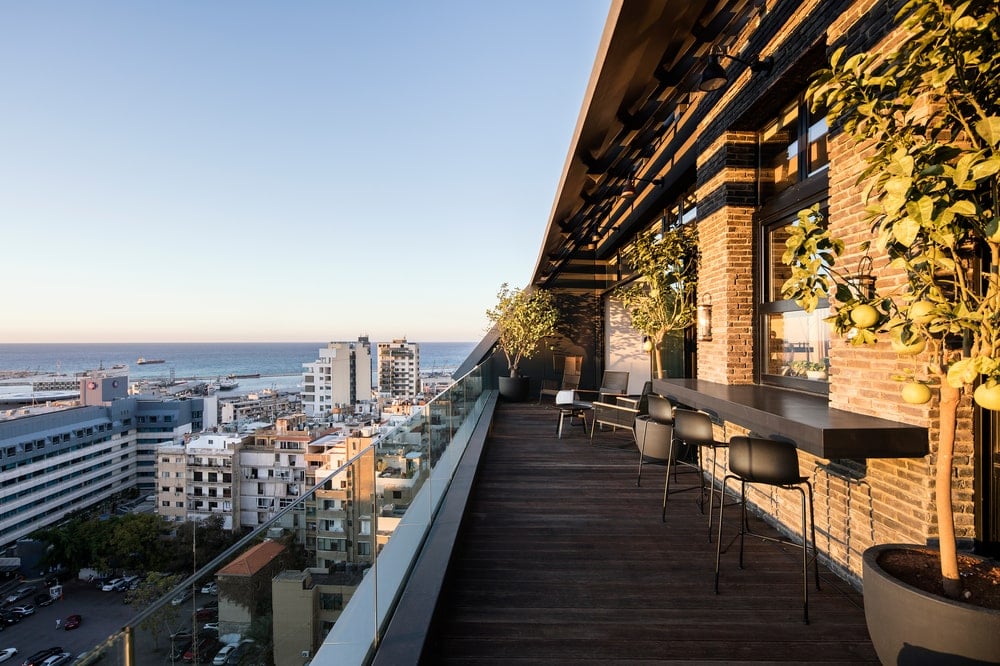 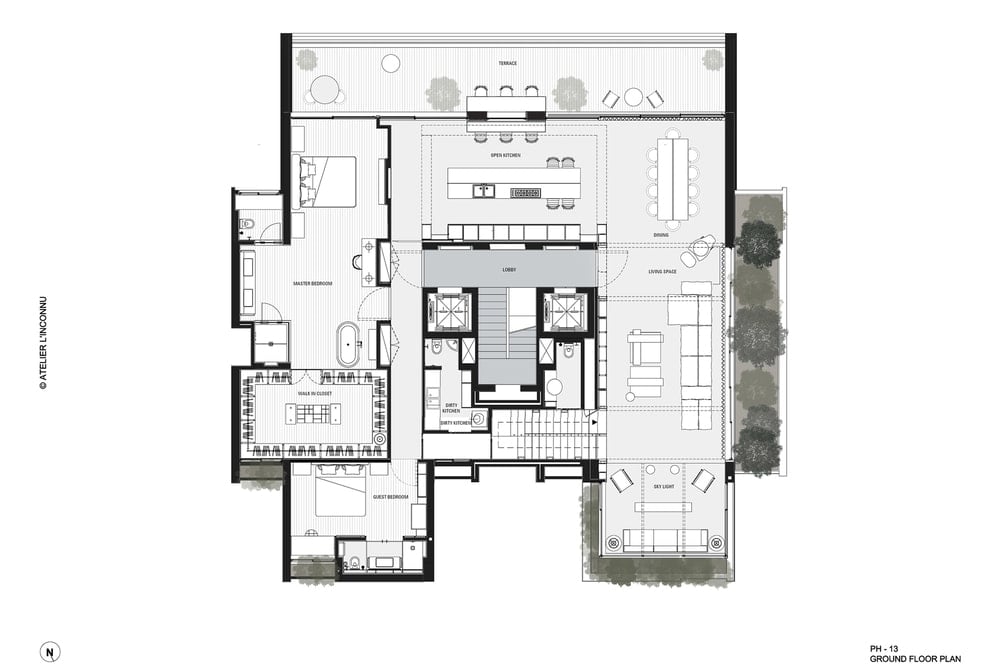 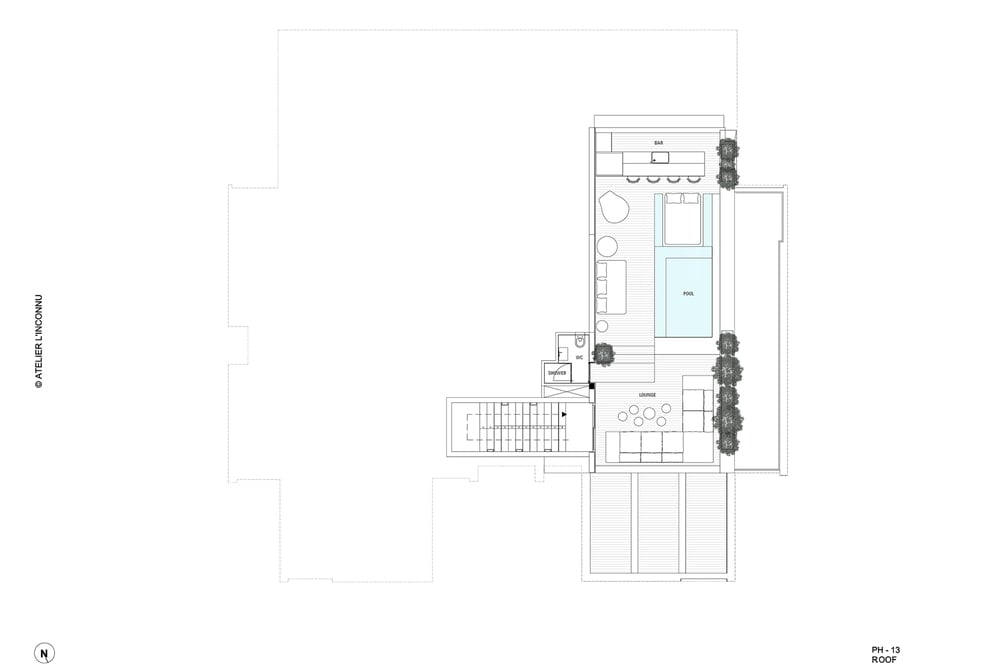 Located off the Charles Malek Avenue in an eastern district of Beirut, PH-13 crowns the building in which it is housed. Though it sits well above the bustle of the dense area in which it is situated, it does not seek to escape the urban fabric of its city but rather embraces it.

Unlike the local culture where privacy seems to be a need rather than a desire, the proposed scheme manifests a desire to blur the limits between interior and exterior spaces. The residence simultaneously seems to be reaching out to the city while inviting it in, achieving a sense of levitation through its transparency and altitude.

The central living space around which the inhabitants dwell is conceived as an L-shaped node open on three orientations, bridging the house’s various activities through physical and visual connections. The reception space is housed within the northeastern arm, opening up onto a lush floating garden, whereas the southwestern arm is bordered by a terrace running along with the dining space, open kitchen, and master bedroom.

The northern corner of the space is capped by a seemingly suspended glass box, its vertical glazed facades folding into a skylight anchored onto the rooftop terrace above, where a dipping pool hovers above the surrounding buildings.

PH-13 is a product of fervent detailing, with various elements studied, reevaluated, and customized; from the bespoke steel, spotlights perched, bird-like, along the ceiling beams of the reception, to the suspended wooden and steel staircase, metal library, or striking skylight capping the reception corner, complete with automatic sun-breaking wooden louvers.

Unlike the traditional residential typology of the region, which tends to clearly draw a very tight limit between public domain and private building, the proposed scheme manifests contextual innovation through its desire to blur the boundary between public and private, in order to take advantage of the region’s mild Mediterranean climate by maximizing natural light and ventilation.

In addition to its prized customized skylight above the northern corner of the reception space, floor-to-ceiling sliding panels allow every space in the house to be transformed from an interior space to an exterior one, extending all living quarters as balconies and terraces directly connecting with the city.

The need for privacy is still addressed with the implementation of deep and wide planters along certain main facades such as the reception, as well as along the edges of the rooftop terrace. The relationship with the exterior is therefore simultaneously enhanced and controlled through vegetal curtains formed by the foliage of the plants. Views, light, and wind seep into the spaces, subtly filtered as shadows are created, all the while transforming the residence seasonally, internally as well as externally.

By attempting to inscribe itself into the fabric of its environment through these understated yet intentional gestures, this project seeks to become a product of its context. It is aimed at presenting a subtle yet different way of inhabiting the city; a particular relationship with the exterior, with the fabric, with the elements.