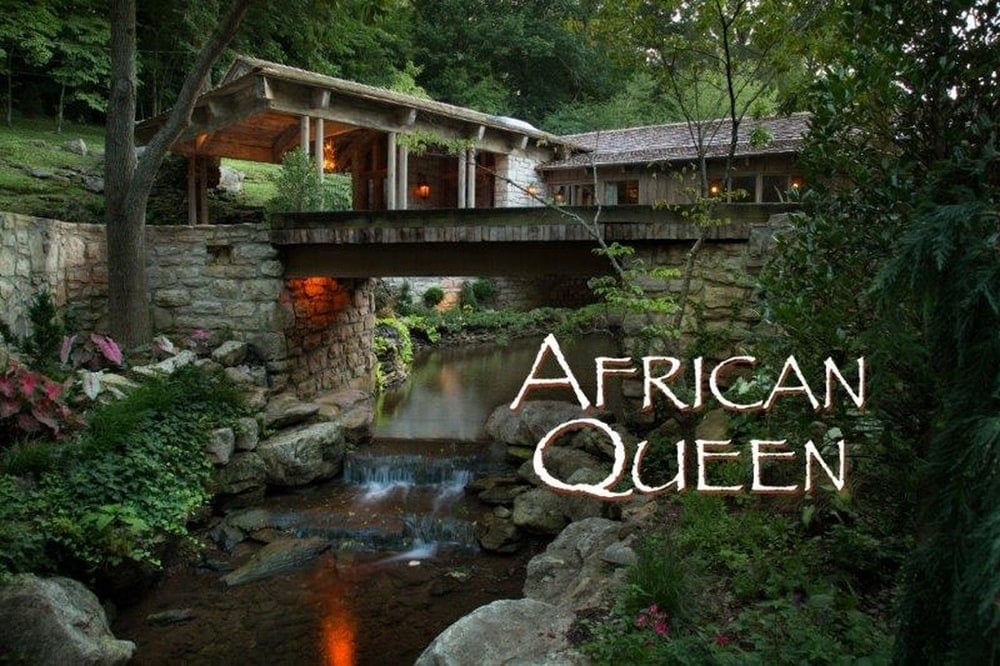 The African Queen is a house in Missouri with a unique African design to its indoors and outdoors. This is now on the market priced at $15 million.

The African safari-style home on six acres of jungle in Missouri is listed under the Real Estate listings of the Zillow Group.

No passport needed for this African safari – one only has to go as far as Springfield, Missouri to get the full impact of a jungle watering hole fed by a spring thick with vegetation and with a rustic outpost home bridging part of the stream that feeds it. The house named The African Queen, now for sale by its owners, is the fruition of a dream and their talent for turning a vision into reality.

With exceptional creativity, they resurfaced the house with reclaimed wood from ancient structures and had an artisan create a textured floor made from 500,000 pieces of inlaid oak, walnut, and ebony in a mosaic pattern that includes a crocodile that appears to be ambling across the room.

The office has a two-inch-thick portion of the glass floor weighing in at 1,000 pounds with views of the creek below with its rainbow trout. The ceiling is thatched with large bamboo beams where one can look out over the water and fountain through its glass wall. Almost all the rooms in the house have unobstructed jungle, water, and fountain views.

Furnishings include imported pieces from taxidermied animal trophies on the walls to animal skin upholstered antiques with horn legs and many African works of art as well as those collected from around the world.

One can forget the overuse of granite kitchen counters in this huge kitchen. Instead, counters and sink have been honed from seamless slabs of Carthage stone weighing in at 3,500 pounds. A hammered copper hot tub is positioned into a rugged rock wall and the bathroom sink is honed from petrified wood.

Out of Africa and located in the middle of the United States, the one-of-a-kind two-bedroom, 3,300-square-foot African safari-style home on six acres of Missouri “jungle” is selling furnished and priced at $15 million.