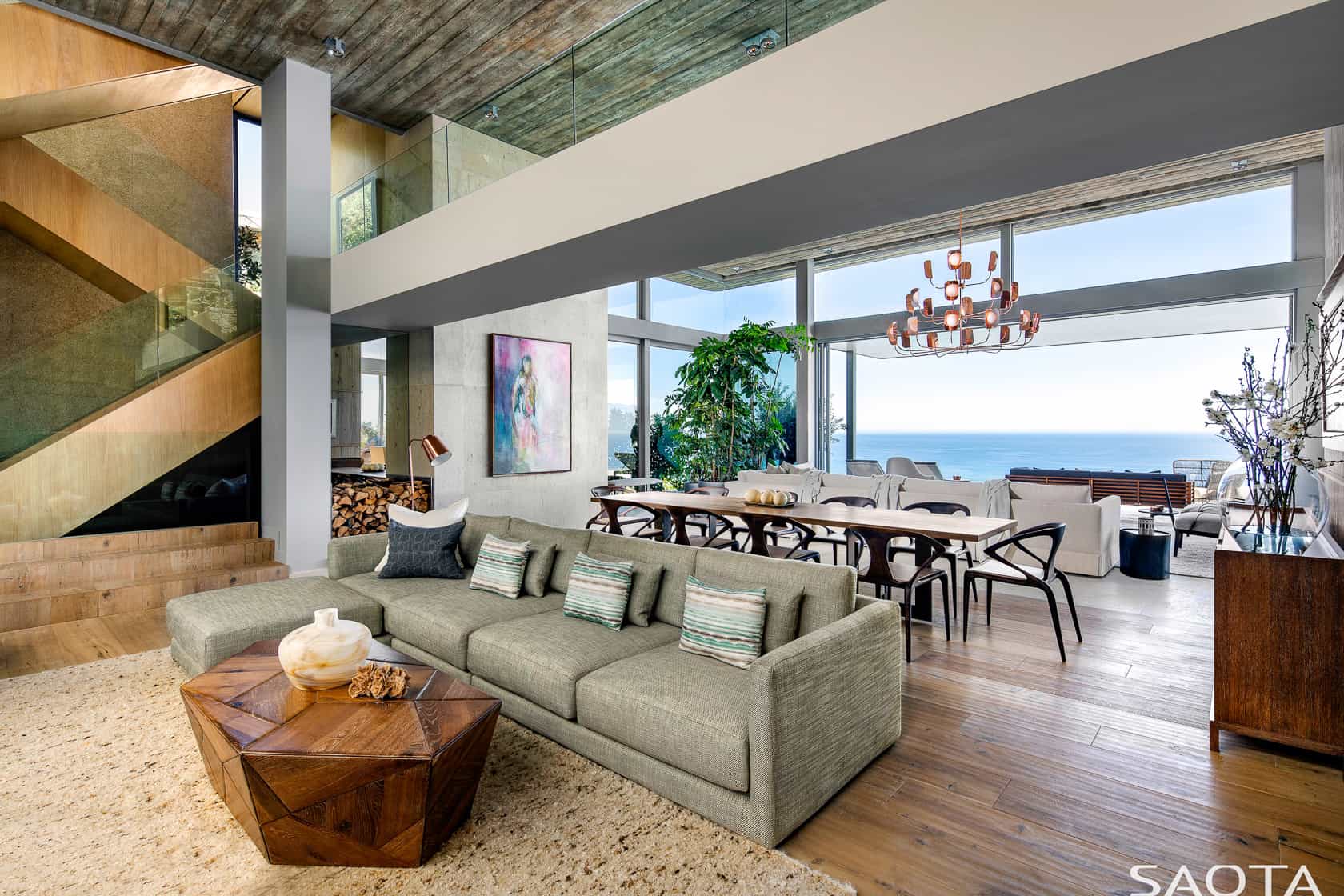 Accessed from Kloof Road, which winds along the western slopes of Lion’s Head, this site is positioned in the wind-protected suburb of Clifton. Years before any development was introduced, this slope was conceivably covered by indigenous forest and fynbos. Today, however, the area is developed and enjoys spectacular views over the sandy beaches, boulder outcrops, and Twelve Apostles mountains towards the south and sunset views over the Atlantic Ocean.

The first aspect of the project that required addressing was the steep slope that would have to be excavated to accommodate the structure. The home was conceived as an arrangement of staggered blocks that rise along the side of the mountain, with the upper, private levels becoming appropriately shielded from both visibility and street-level noise.

‘The conceptual approach to the design was to reinstate the qualities of a natural landscape,’ says architect Phillippe Fouché of South African architectural firm SAOTA, who lead the project. The lower part of the building, an independent apartment, is then expressed as ‘a heavy stone plinth’, its gabion-walled exterior and cocooning interior of dark-stained oak and off shutter concrete reflecting the strata of the mountainside out of which they emerge. On top of this is a transitional space that is expressed as a green terrace and braai area, representative of what would have been the landscape’s foliage level. All levels of the house are connected via a sculptural timber staircase, like a folded ribbon that, appropriate to the home’s design narrative, gradually lightens in tone as it rises.

A vertically slatted box hovers over the terrace, allowing the forest bushwillow trees below to grow into this level, with screens that can be opened or closed to adjust the amount of natural light filtering into the interior, ‘as if you were sitting in the shade of a large tree’. The structure was engineered from a durable yet lightweight aluminium in a finish that mimics the different tones of bark, a durable solution to weathering Cape Town’s capricious seasons.

‘Above this, the living level is set back considerably to follow the slope of the mountain, resulting in added privacy and acoustic buffering while creating the perception that one is on a platform, connected to the surrounding views,’ says Phillippe. ‘The space is visually extended via the introduction of a courtyard towards the mountainside, which allows for ventilation, light and, again, an opportunity for planting.’ The concrete ceiling of this level, shuttered with rough-sawn planks, championing its raw texture. This emphasis on natural materiality can also be seen in the wooden floors and timber-clad scullery in this space. The scullery also forms the base of a mezzanine-level private study, which is accessed via a bridge that spans the length of the room.

The uppermost level, the primary bedroom, sits above the tree-tops and as such the materials – white marble, pale timber – and use of skylights express a feeling of air and openness while fold-away glass walls welcome in the full expanse of the view. 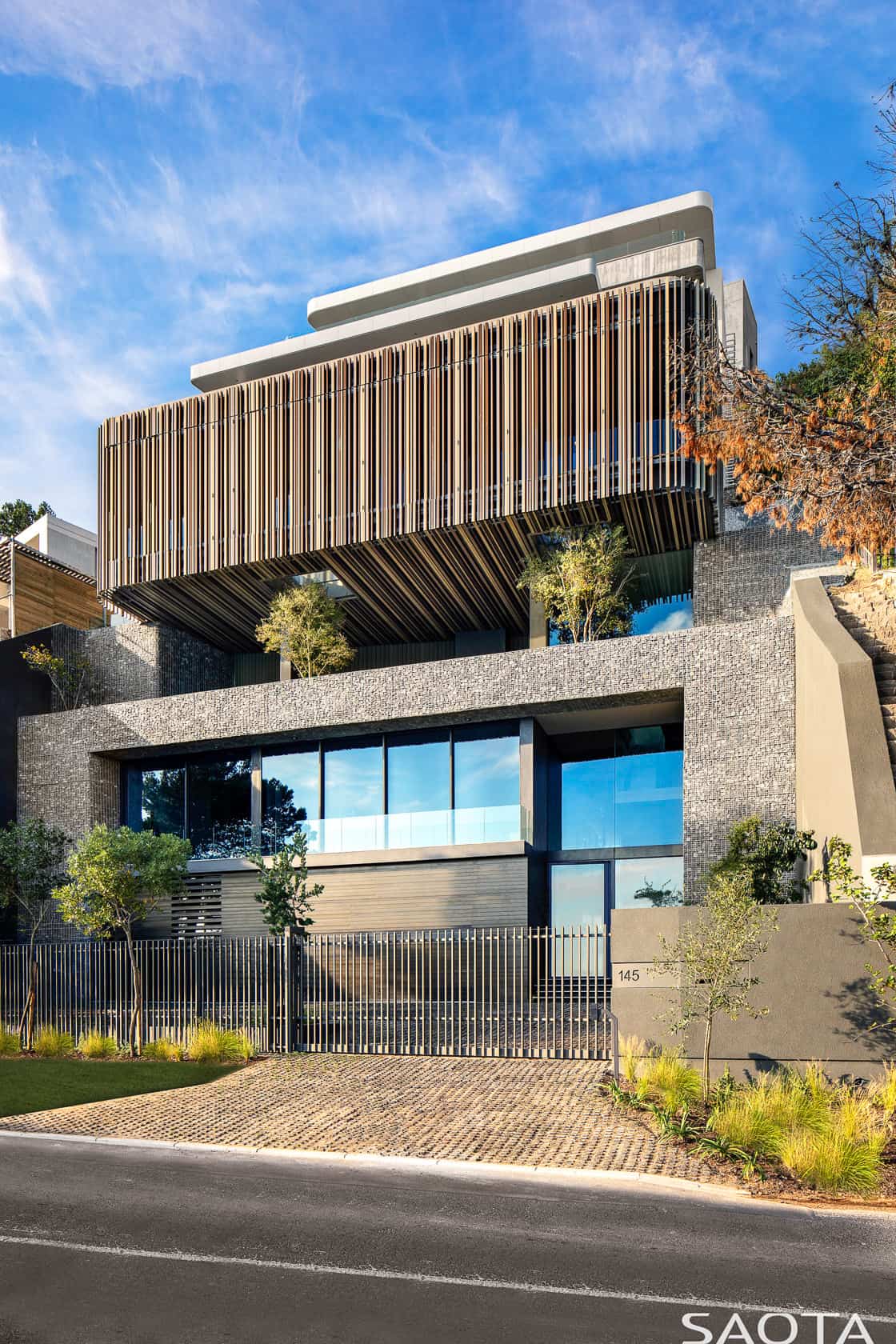 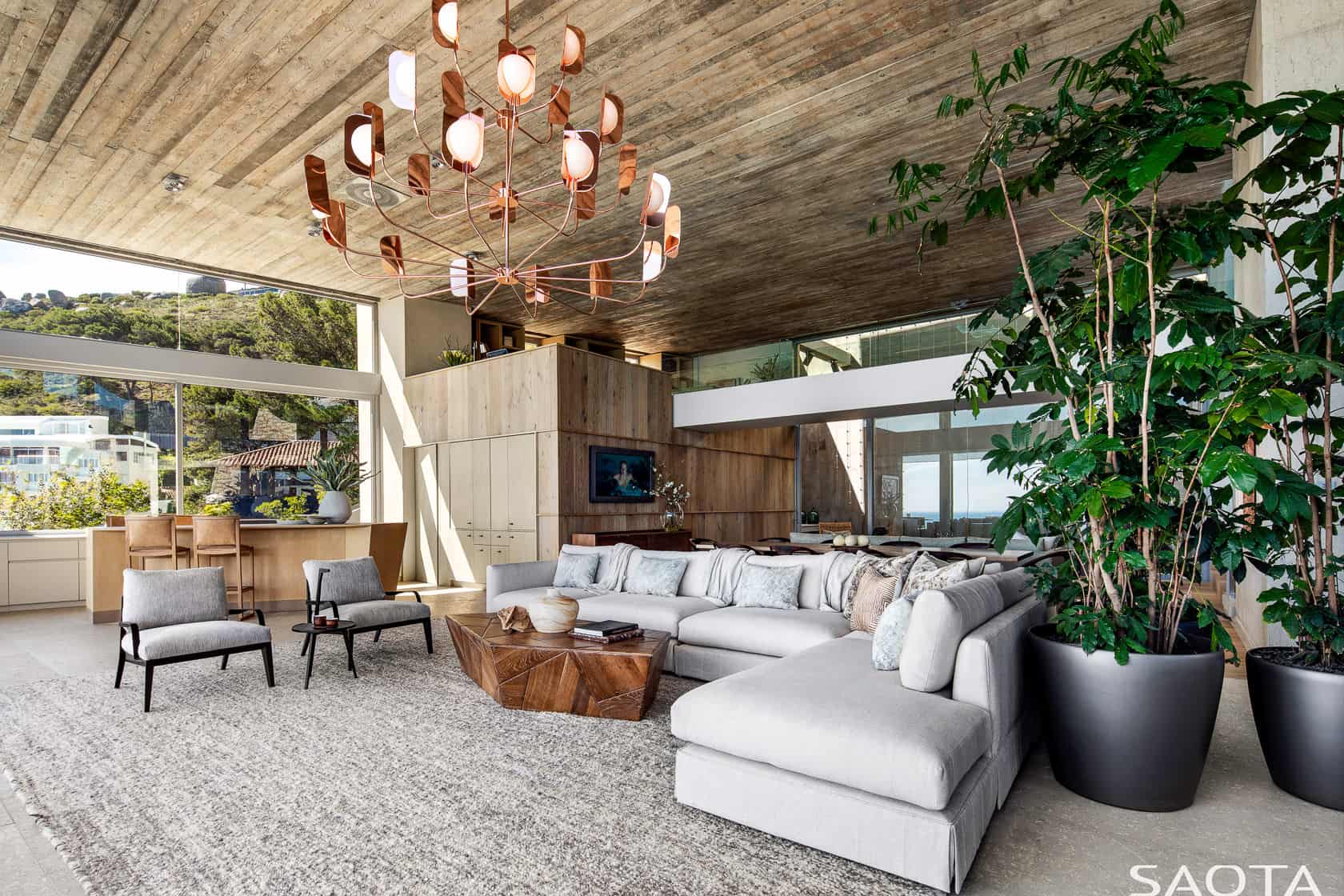 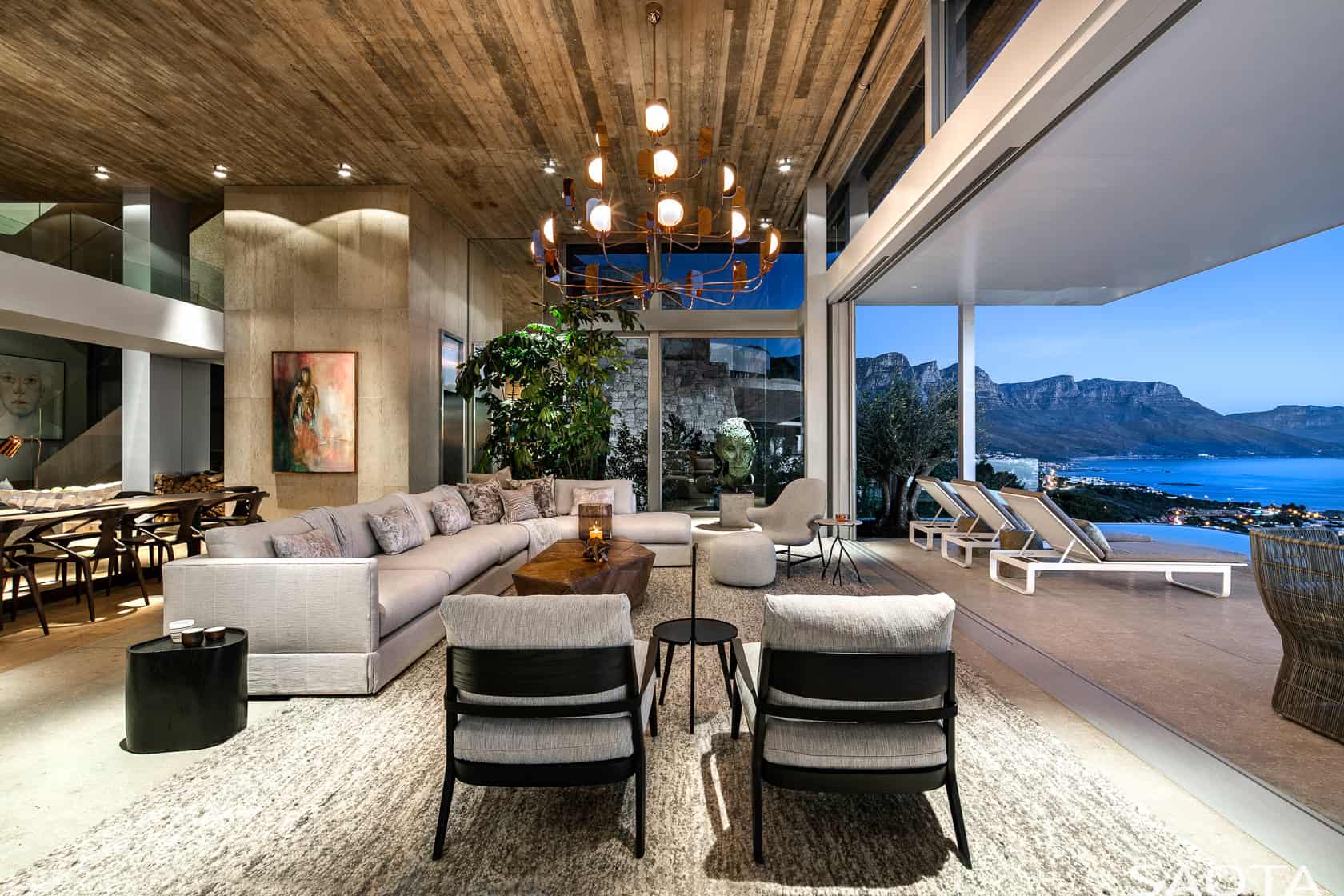 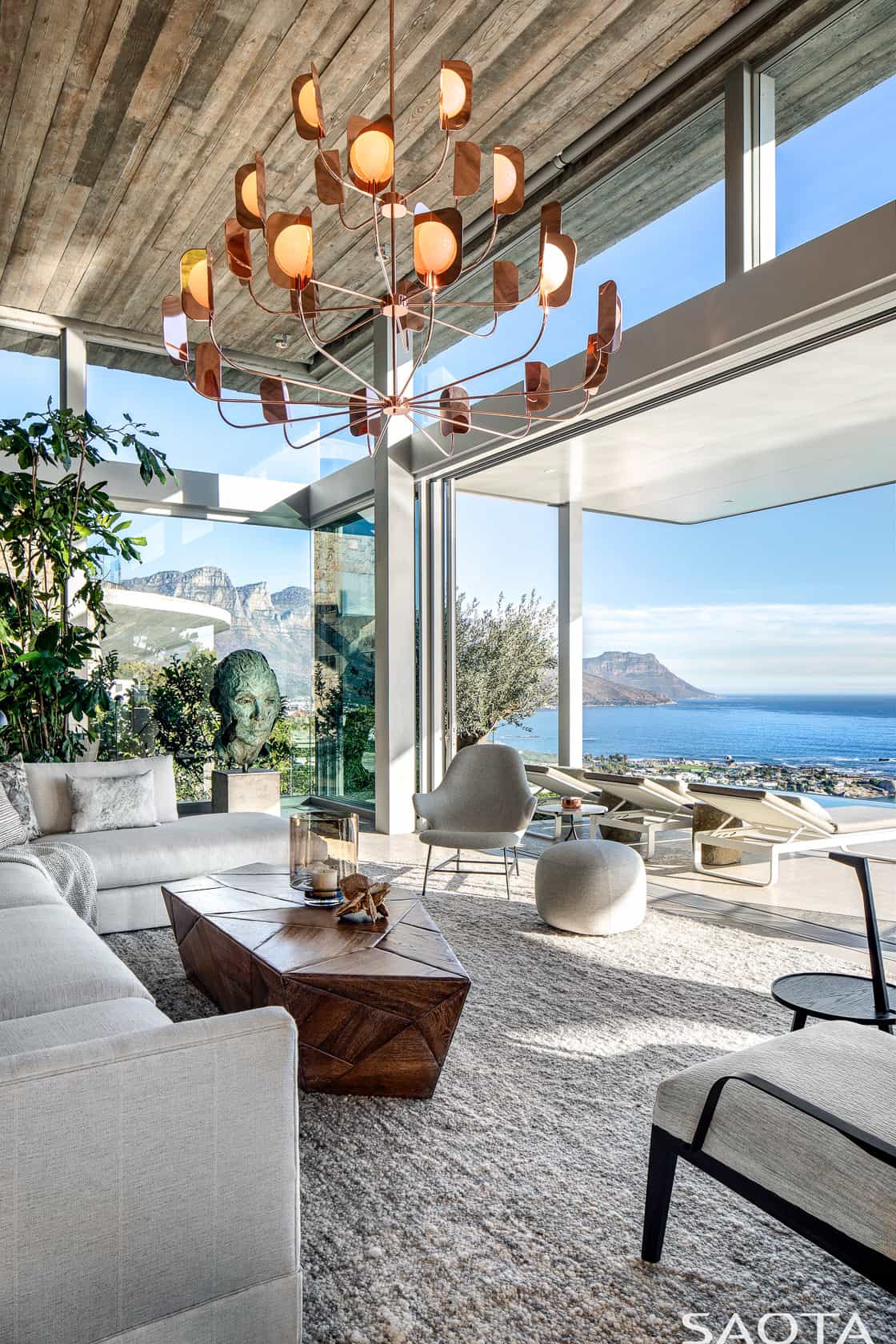 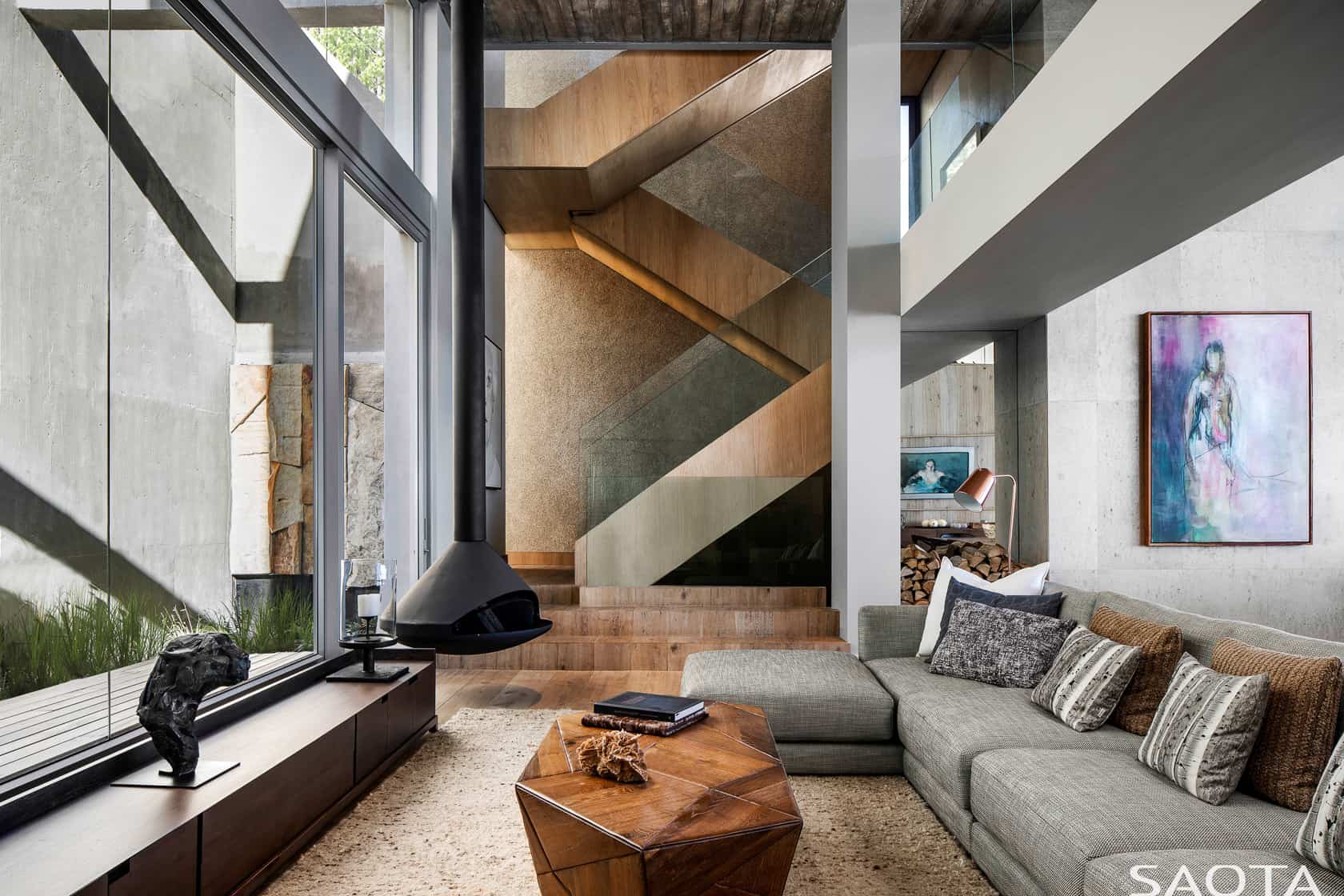 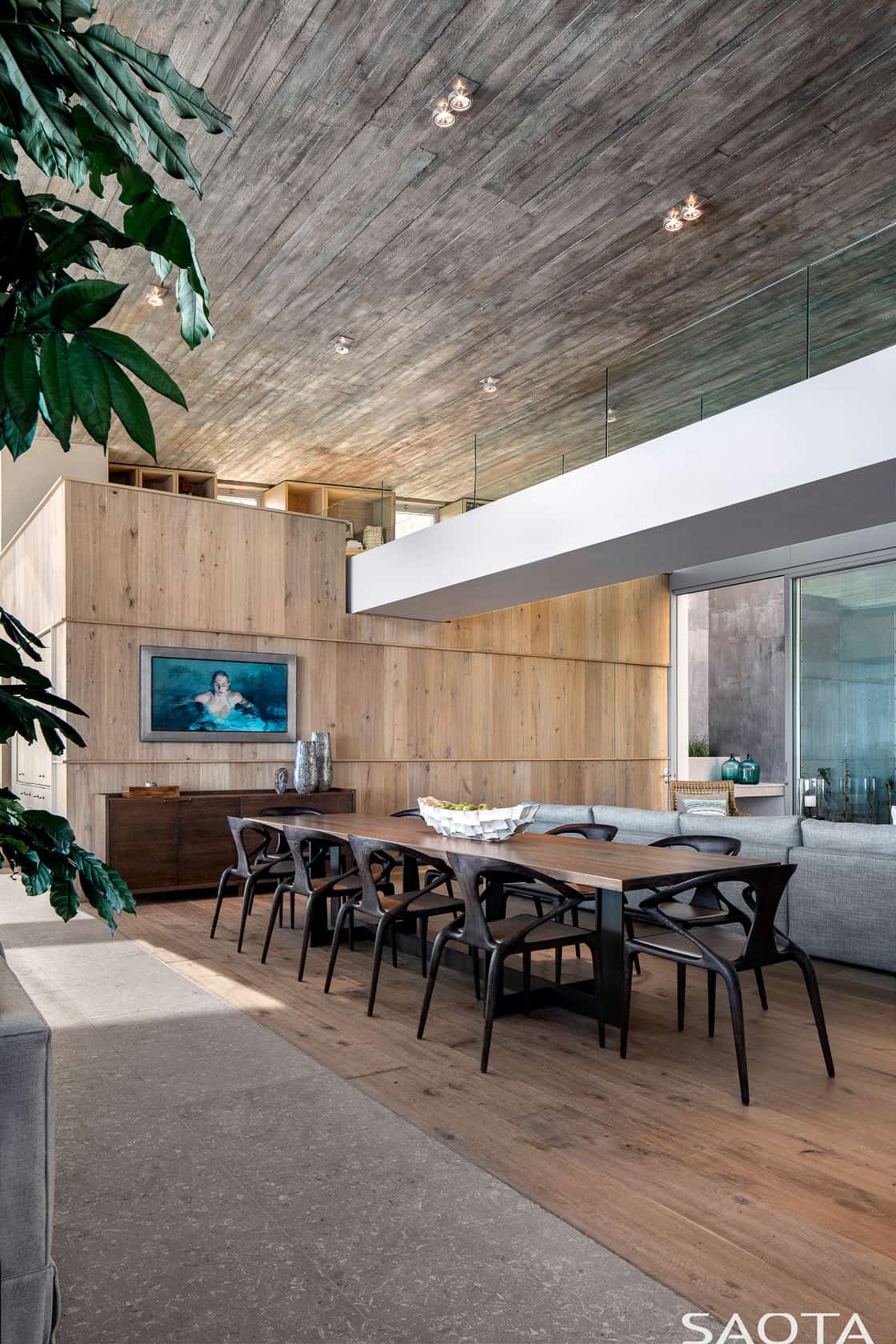 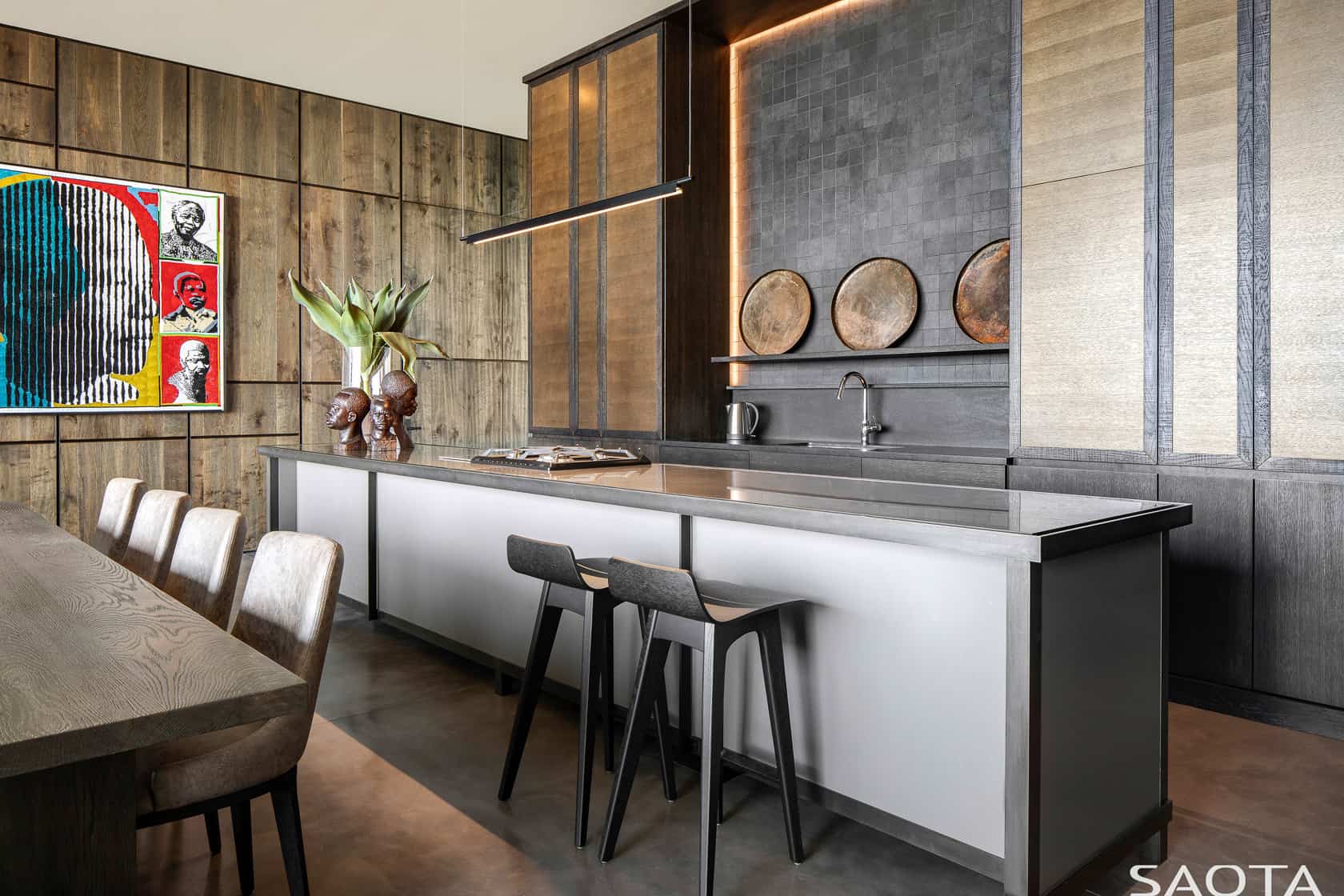 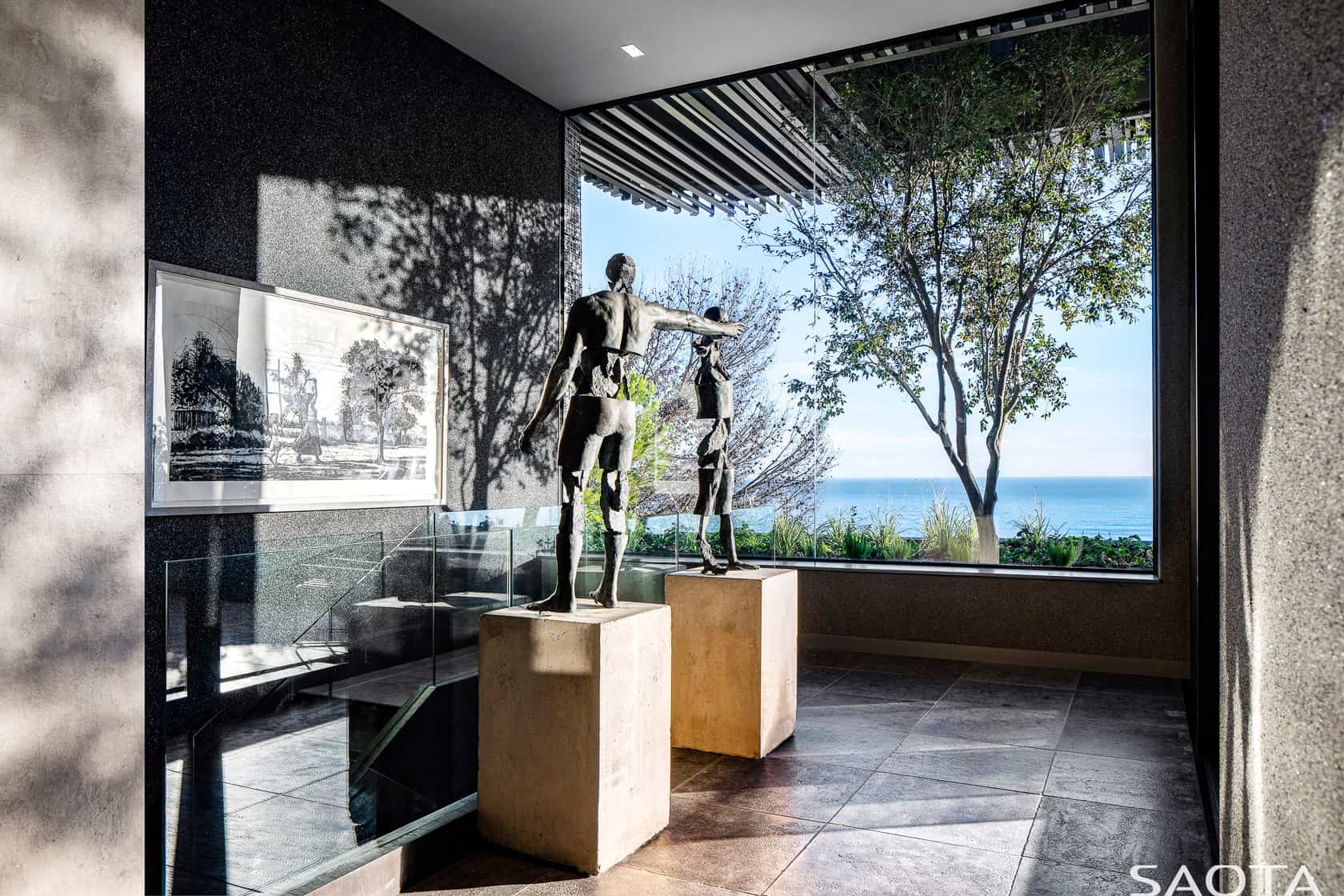 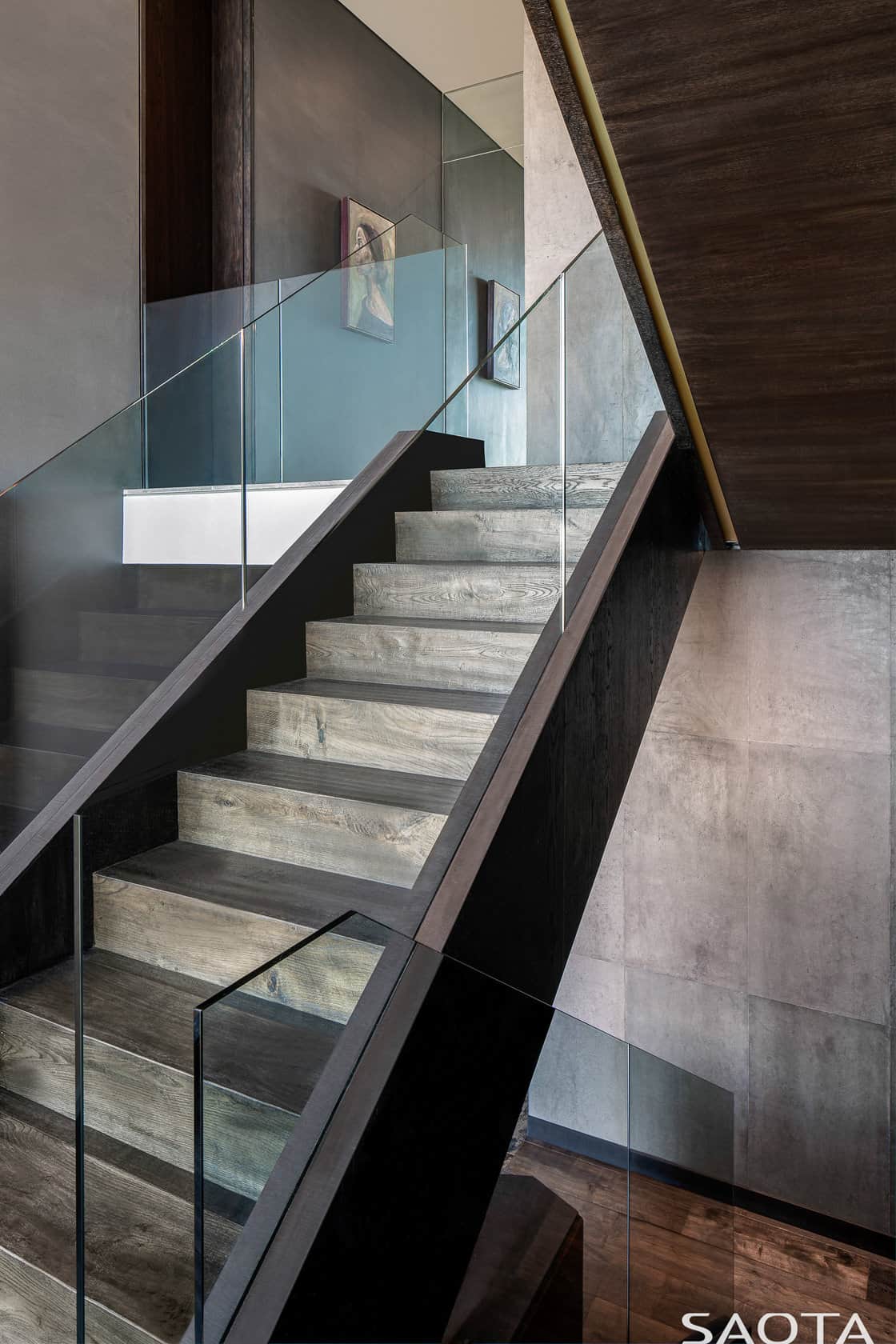 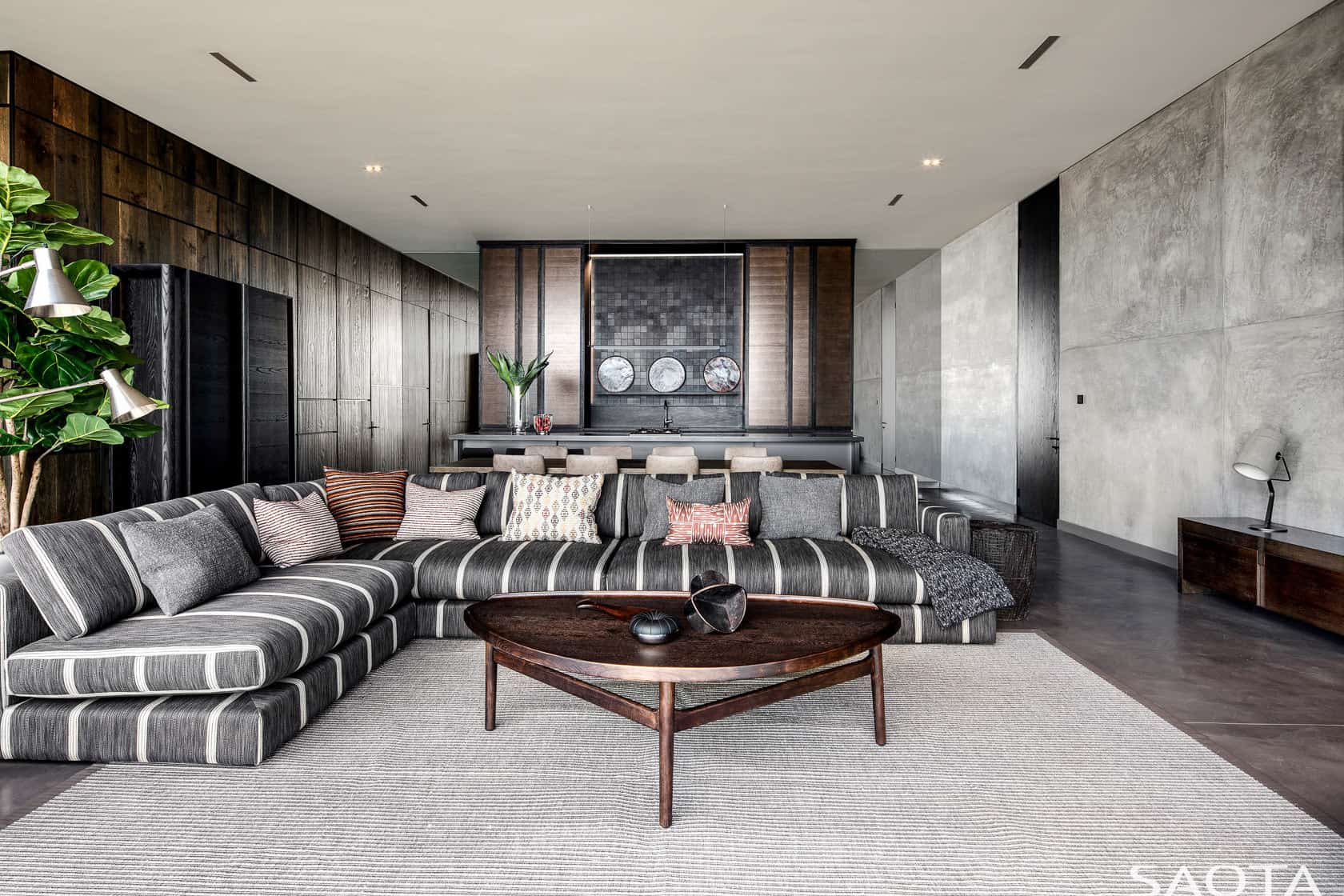 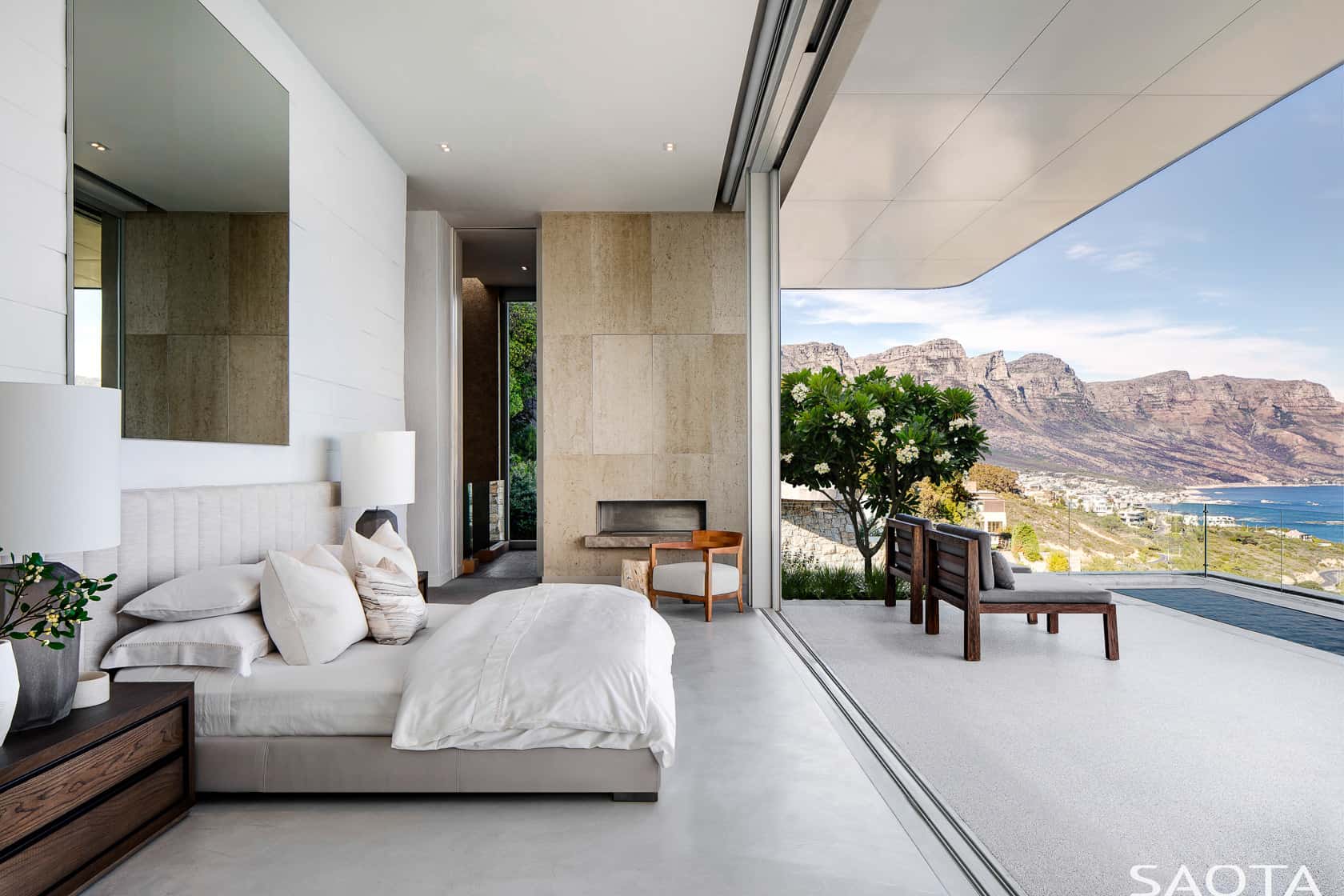 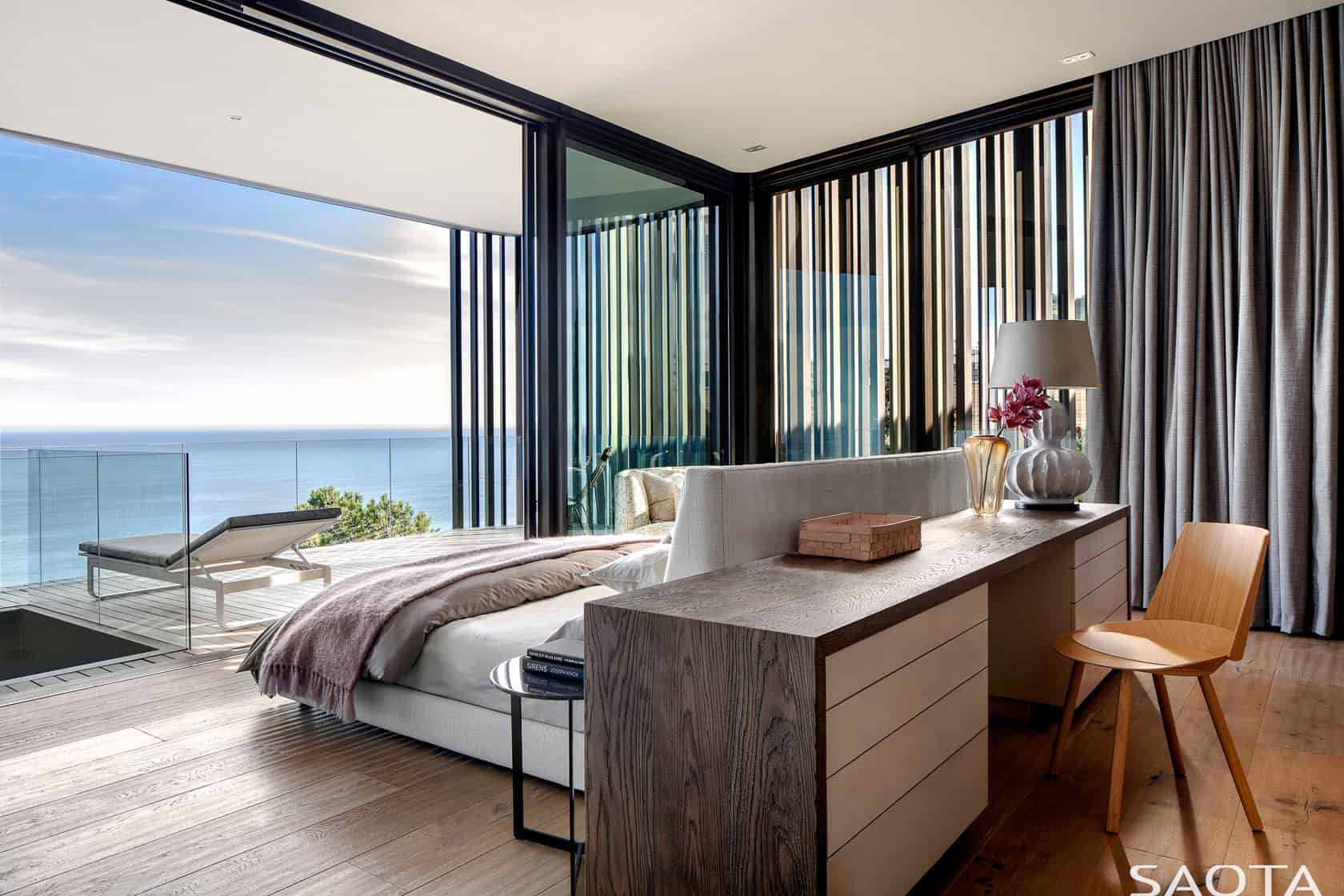 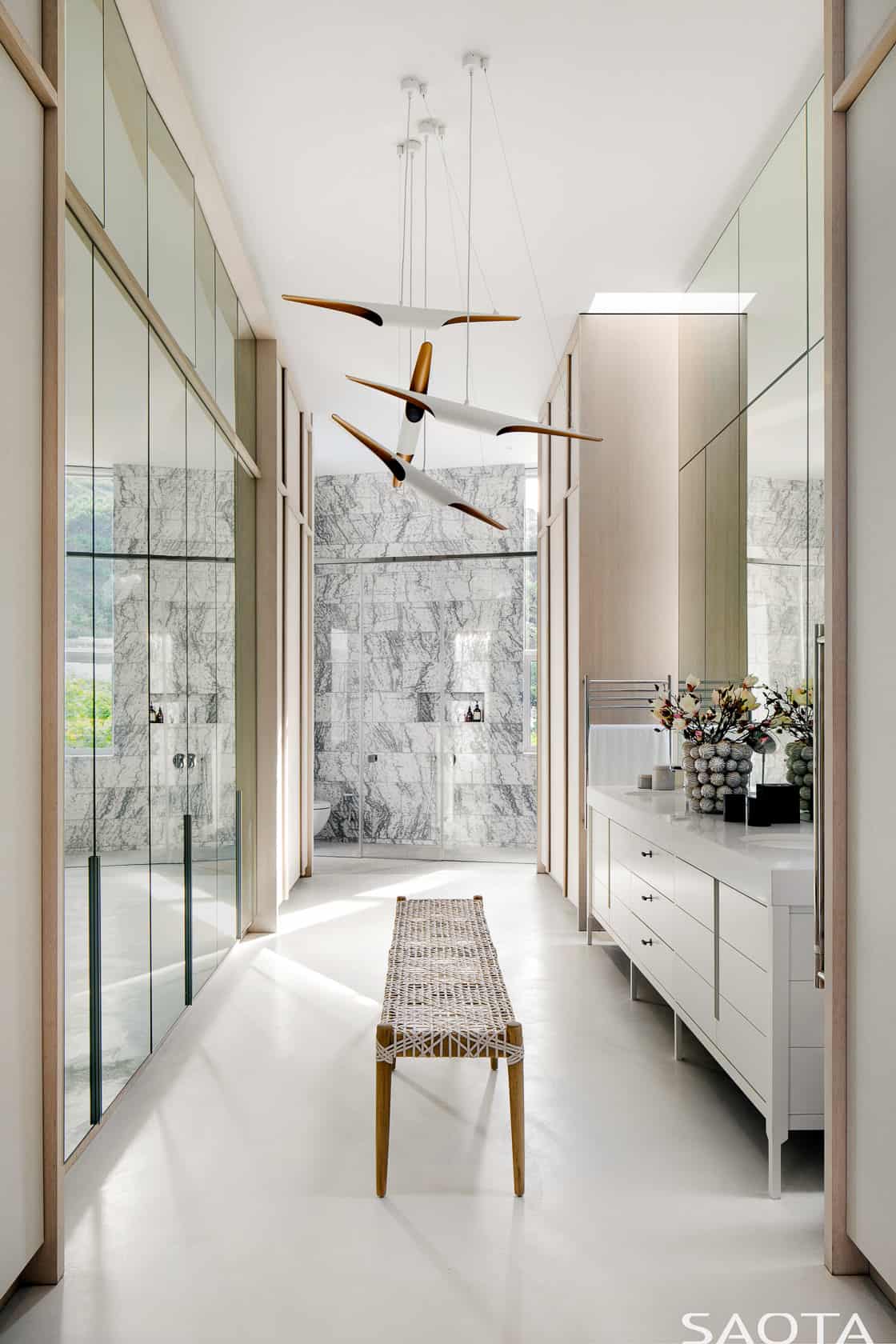 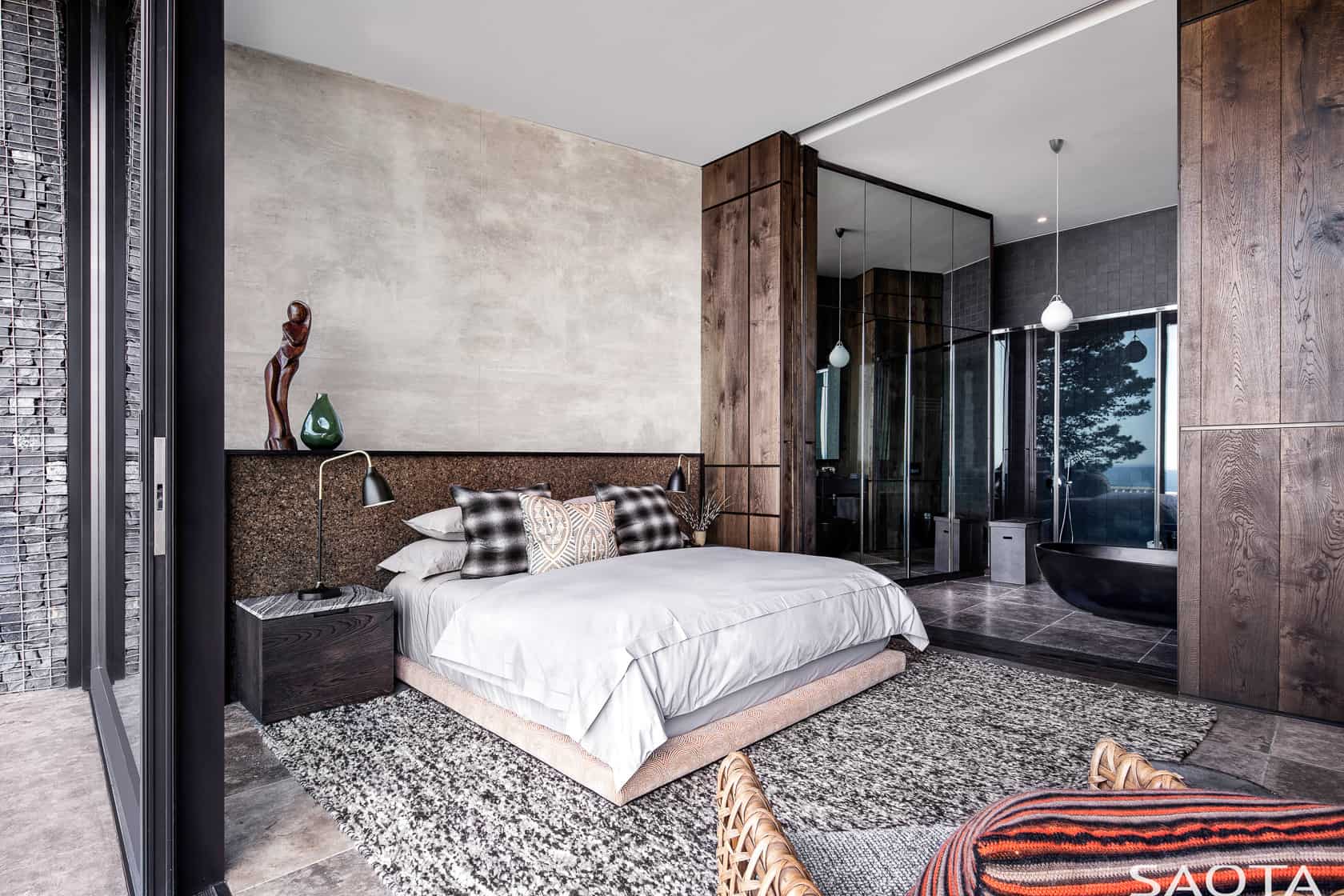 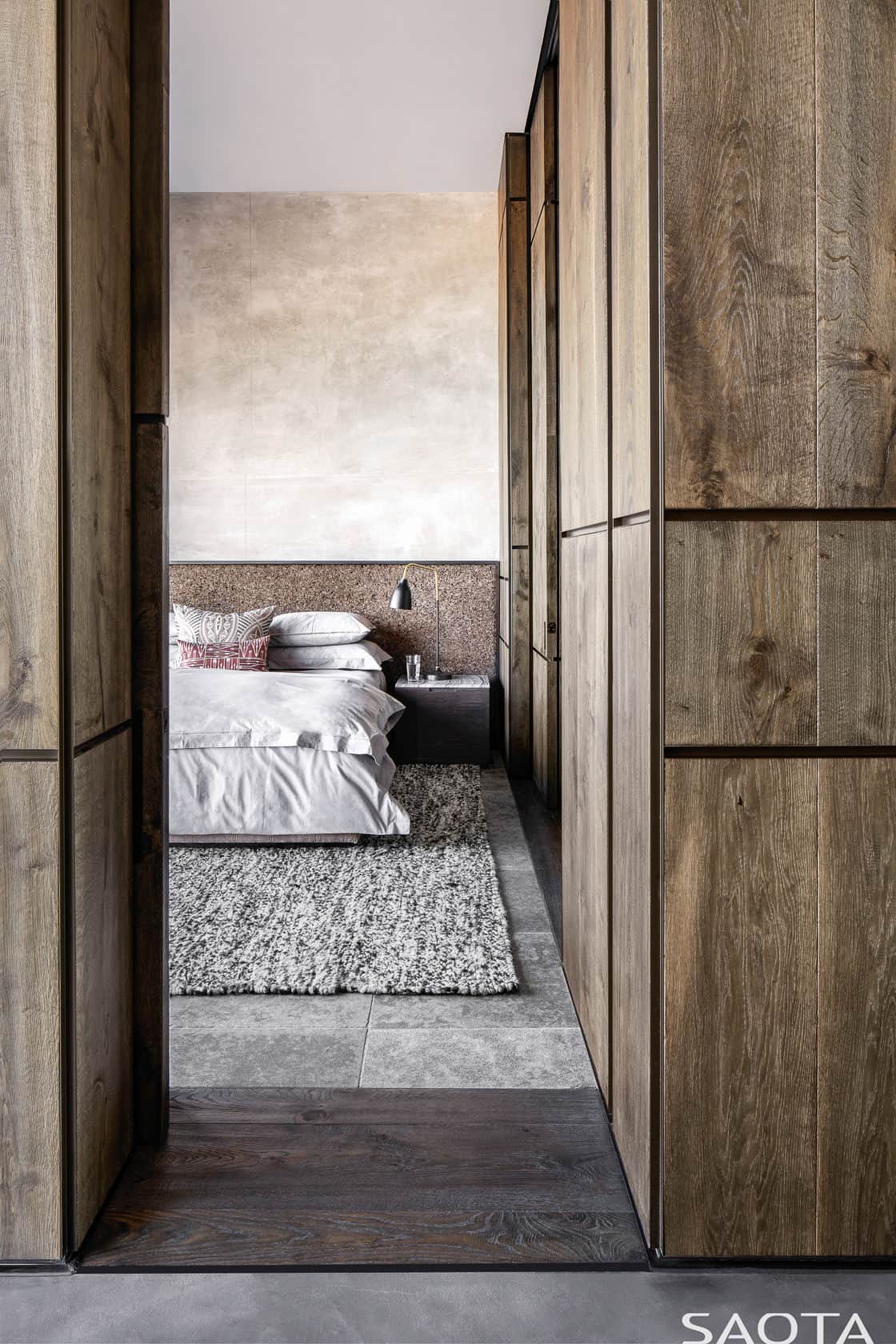 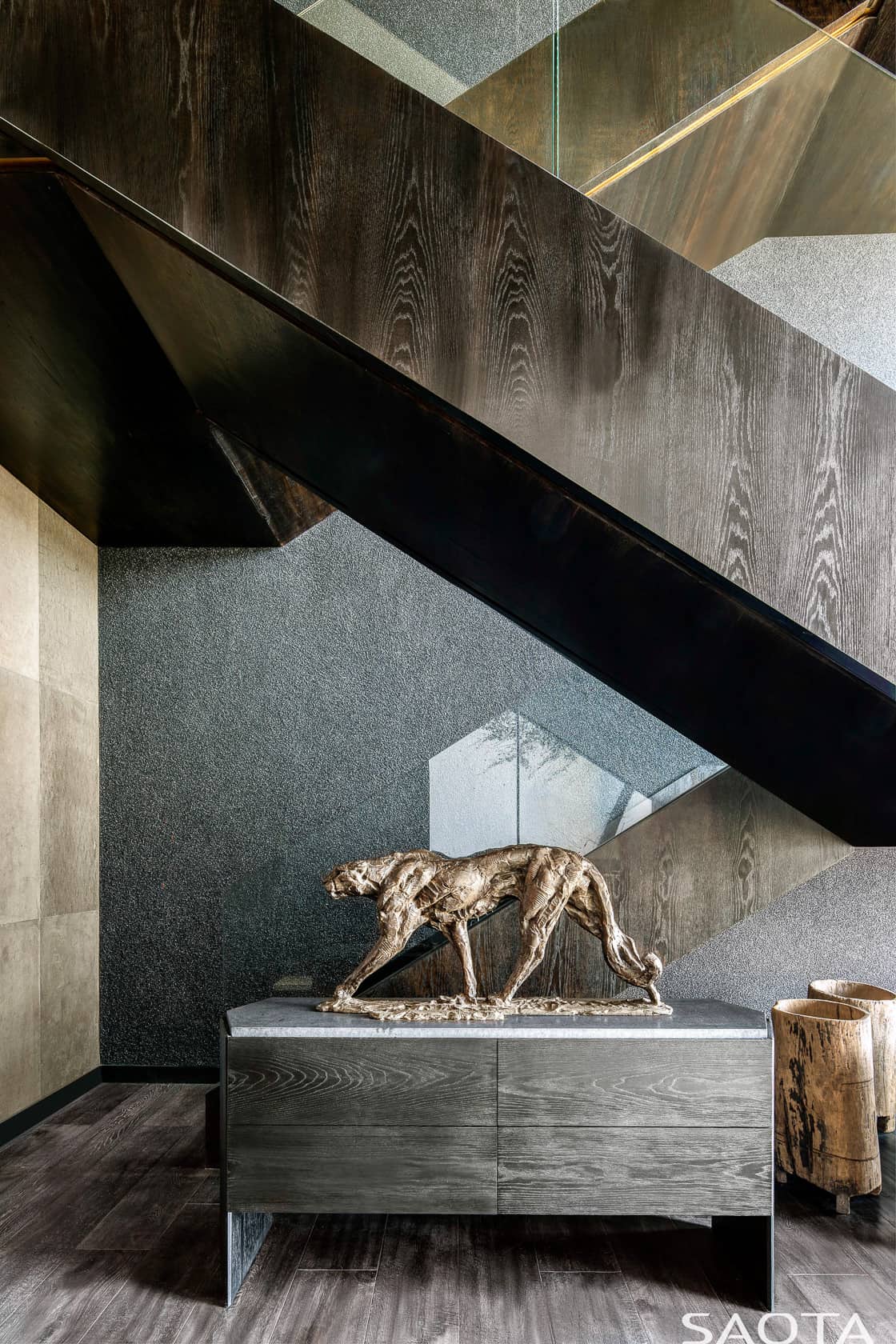 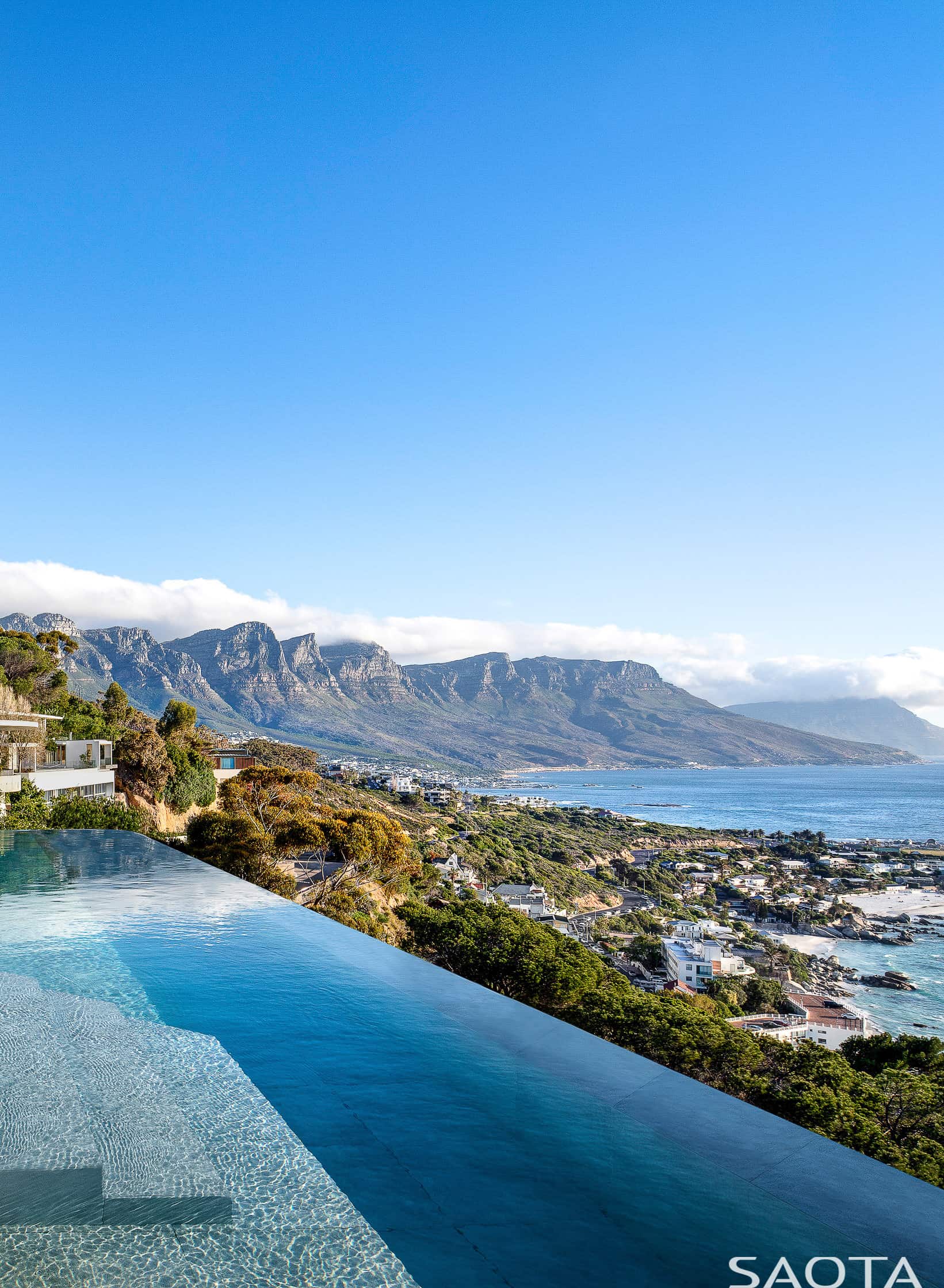 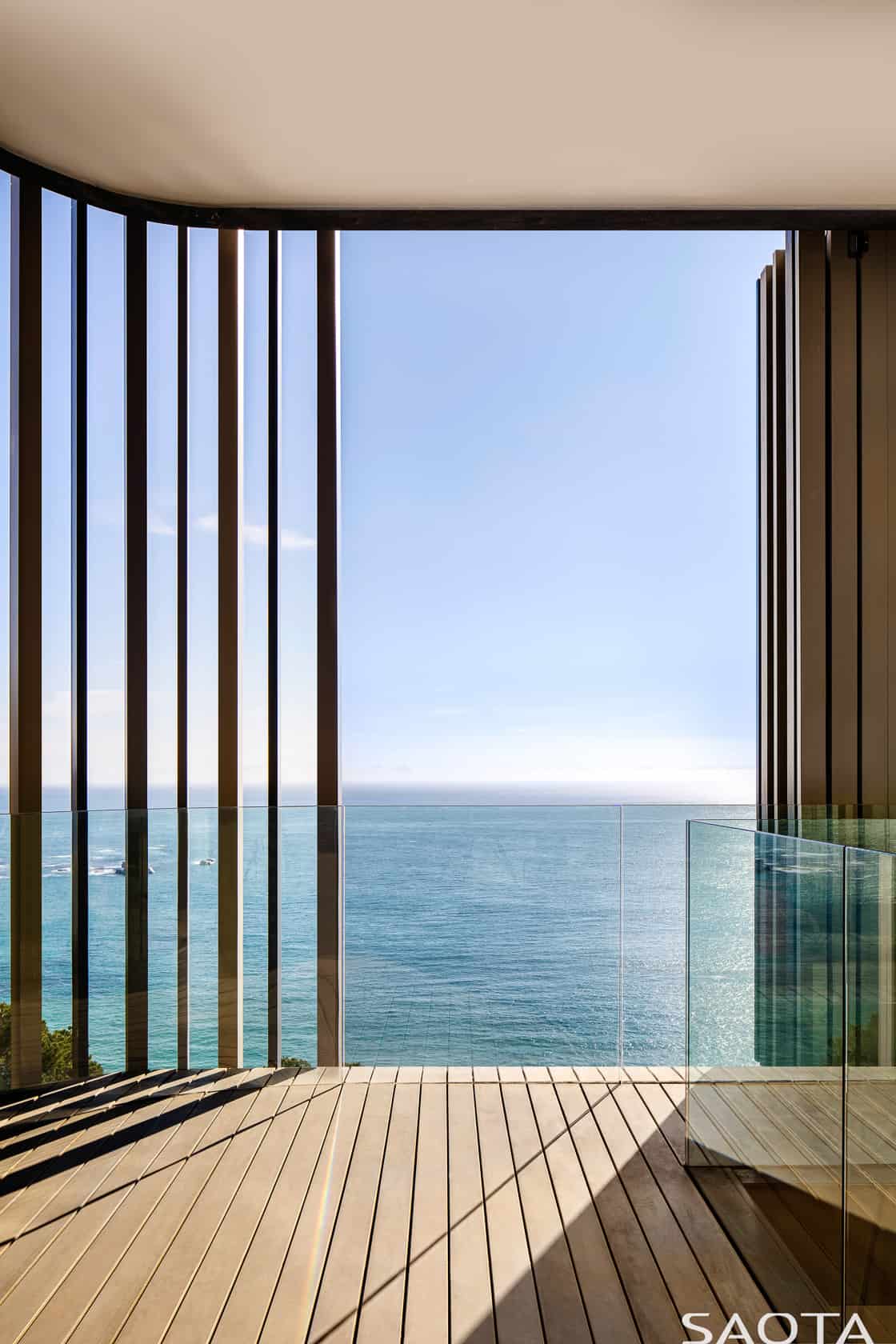 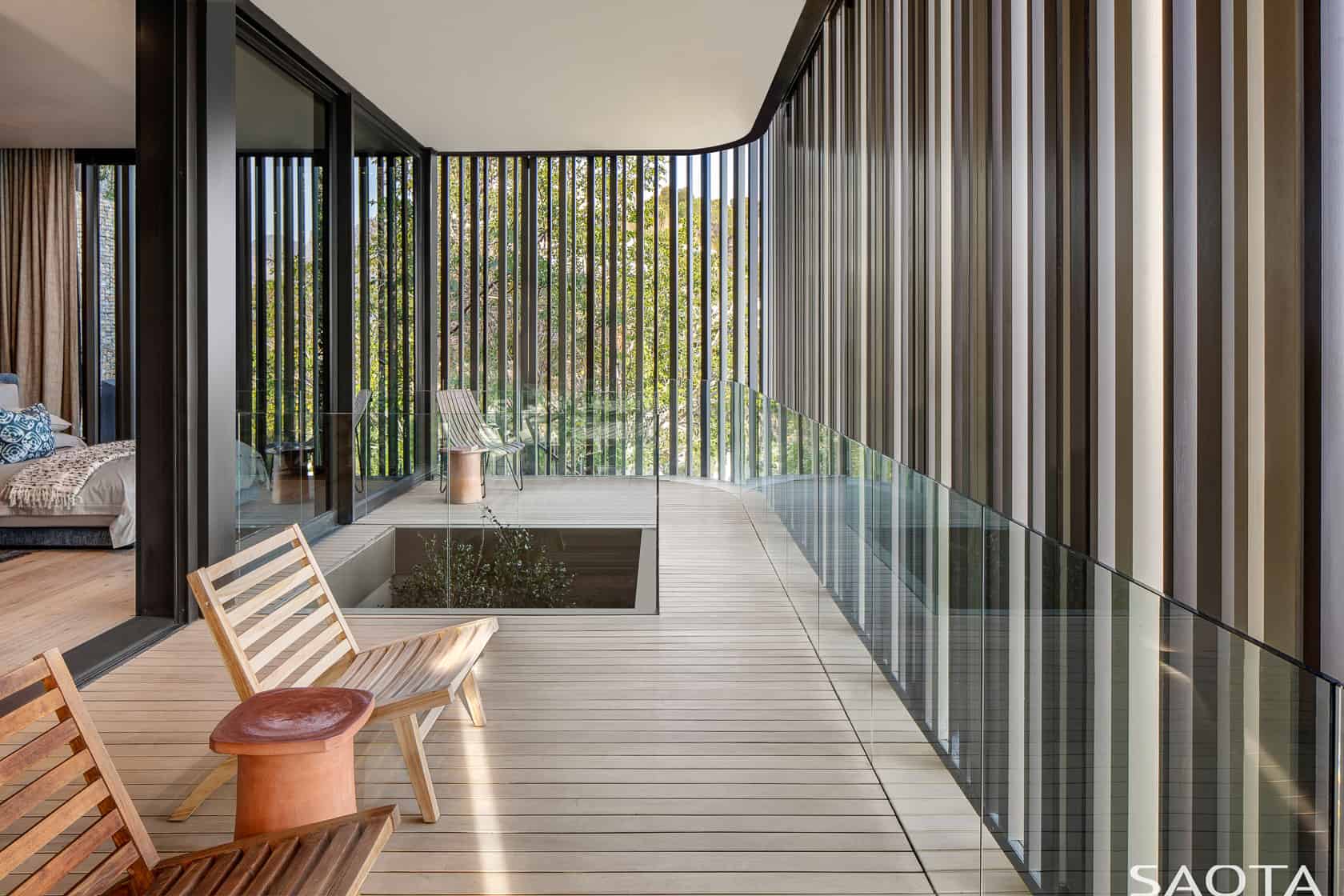 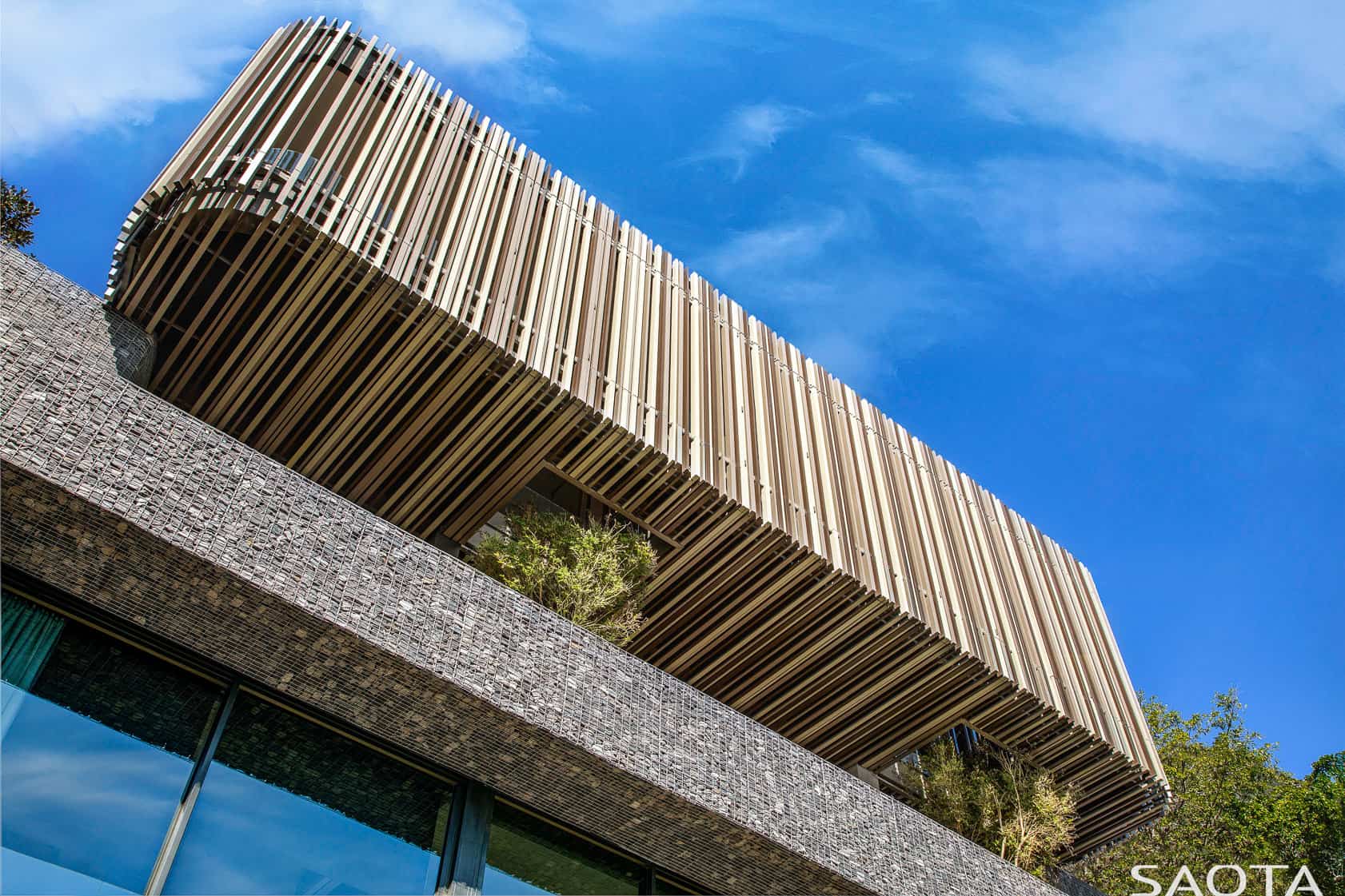 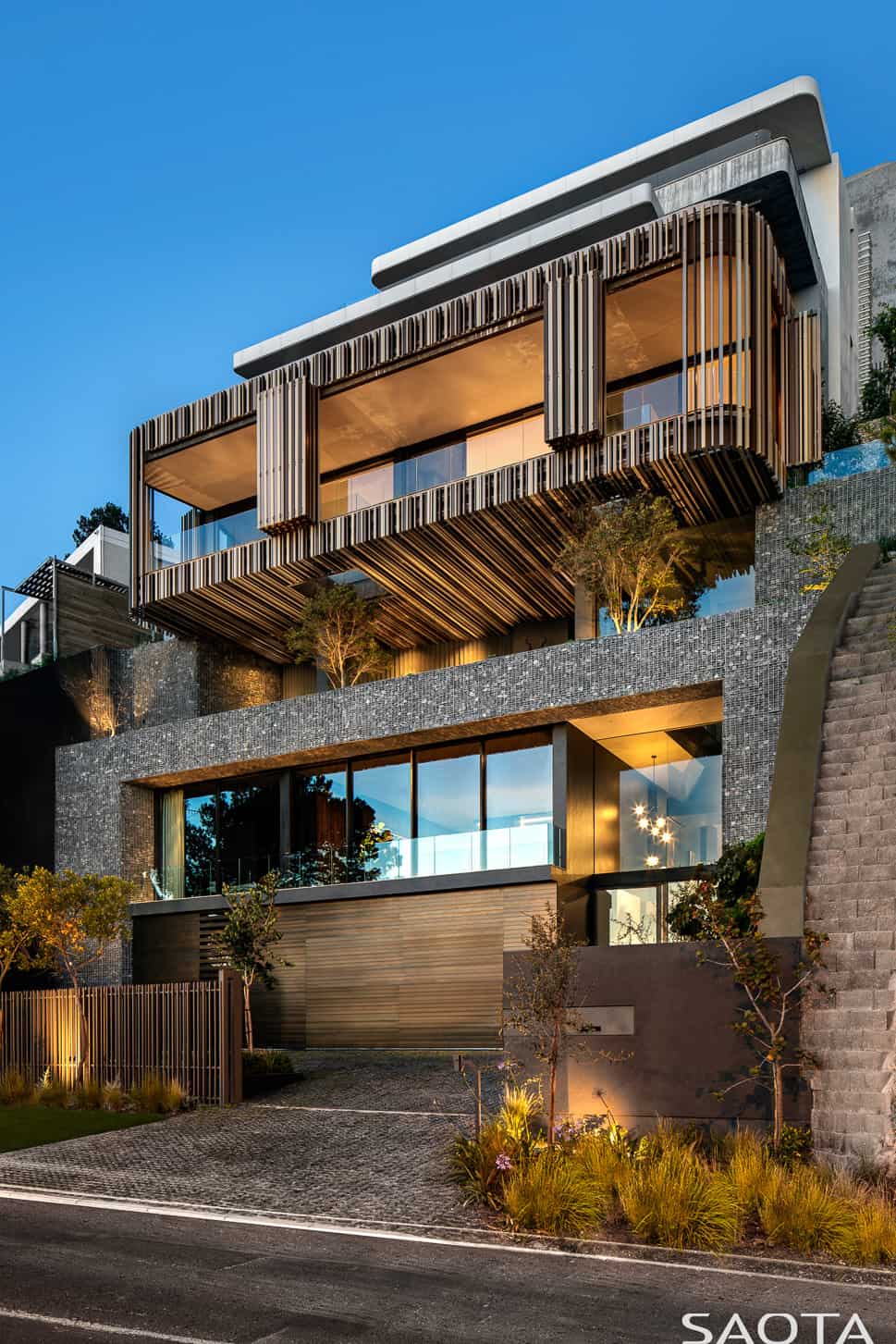 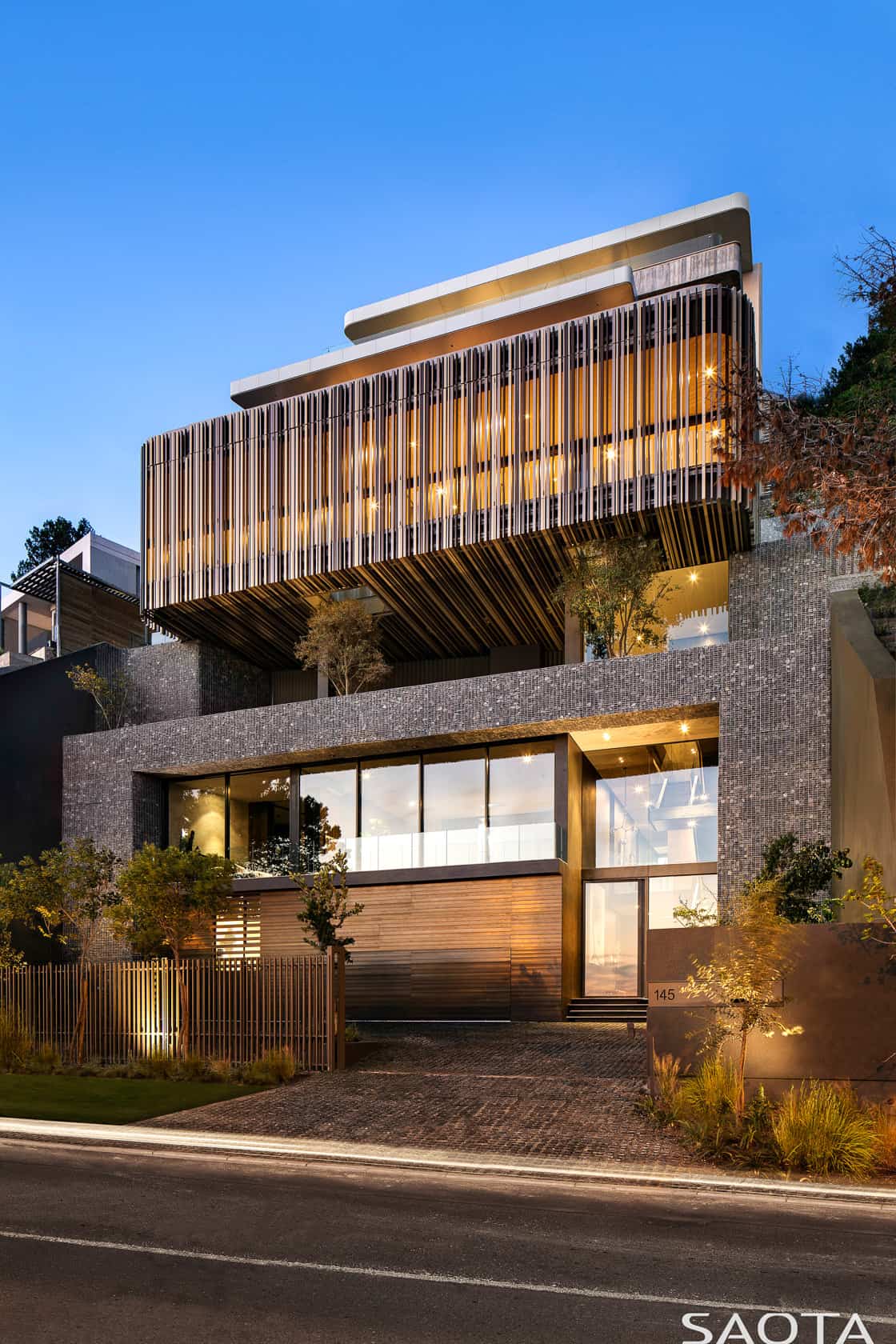