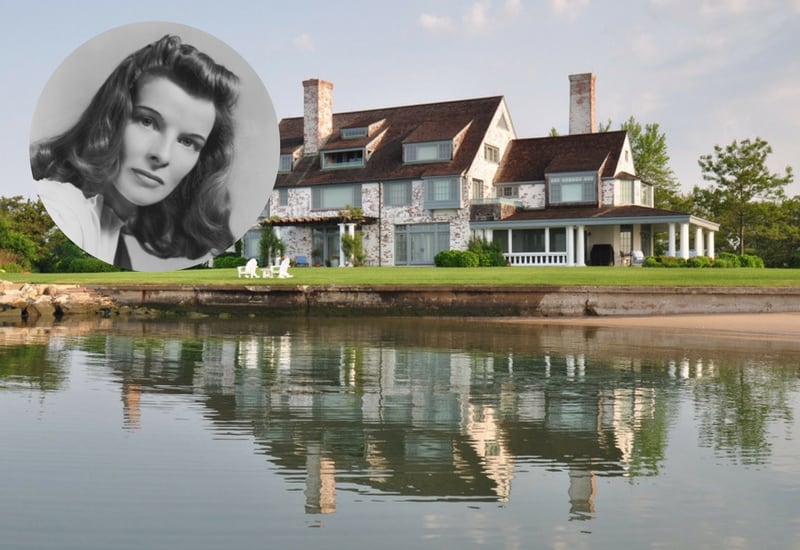 Katharine Hepburn’s Long Island Sound residence was built in 1939 and used by the actress as a family retreat for decades.

American actress Katharine Hepburn is considered by the American Film Institute as the greatest female star of Classic Hollywood Cinema. She holds the record number of four Academy Awards for Best Actress as well as 12 Oscar nominations for Best Actress, surpassed only by Meryl Streep.

Hepburn is recognised for her fiercely independent and spirited personality. She’s considered a cultural icon for having “broken the mold” for women in Hollywood after playing strong and independent characters for more than 60 years. She also defied conventions both in her personal and professional life. Hepburn pioneered wearing trousers and made it acceptable for women to wear at a time when it was still considered as radical. She’s recognised as the symbol of a “modern woman” in the 20th century.

The legendary actress married Ludlow Ogden Smith in 1928 and divorced in 1934. She had an offscreen relationship with her onscreen partner Spencer Tracy which lasted for 26 years. Hepburn died in 2003 at the age of 96.

Katharine Hepburn’s Long Island Sound residence was built in 1939 and used by the actress as a family retreat for decades. The Colonial-style home was also where the actress spent her final years. The three-storey mansion encompasses 8,368 square feet and has six bedrooms with a bathroom each, additional 1.5 bathrooms and 7 fireplaces. Architect and construction CEO Frank Sciame owned the estate since 2003 and renovated it in 2005.

Expansive outdoors: It’s a waterfront estate with uncontested views of the Long Island Sound. It includes a private dock, a pond and a private beach where the actress took daily a dip.

Bedrooms: The six bedrooms are bathed in white, are light-filled and have sweeping outdoor views.

Check out the full photo gallery below of Katharine Hepburn’s home.

Here’s a map of Connecticut: