Jacqueline Kennedy Onassis has long stood as a beloved icon for the height of American style and grace. Her life story as the wife of John Kennedy is both tragic and idyllic. Her classic Georgian mansion in Washington DC represents her very well with its perfect style and stately character.

Jacqueline Kennedy Onassis, commonly referred to as “Jacky O” or “Jackie Onassis,” was the wife of the most famous Democrat president of all, President John F. Kennedy. She endured one of the most horrific things a person can endure when her husband was shot to death in a presidential caravan in Dallas Texas. She, famously and heroically, attempted to reassemble his shattered cranium with her bare hands. 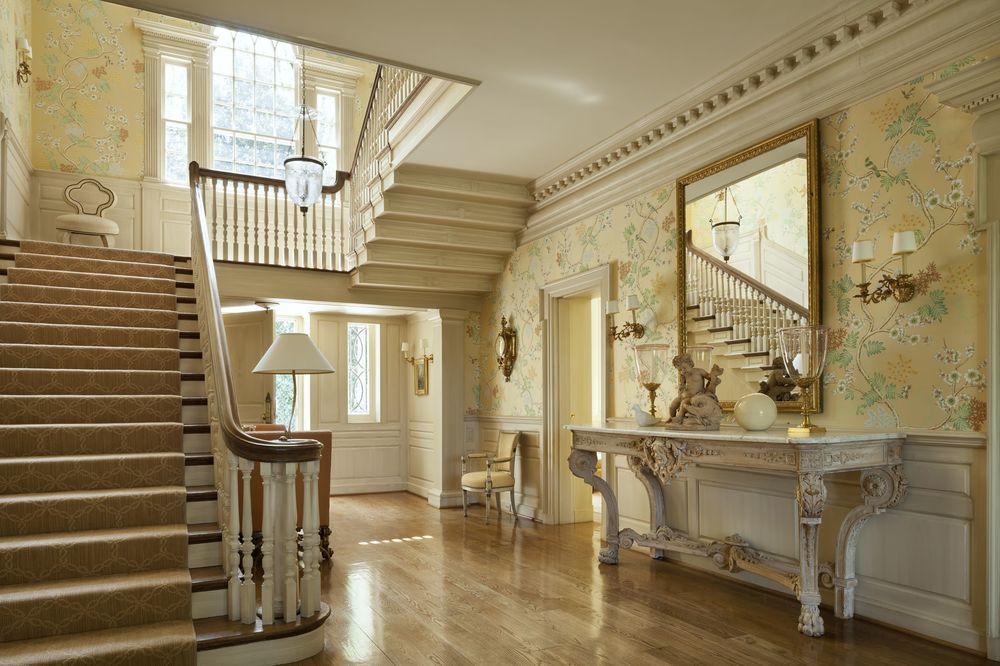 Upon entry of the house, you are welcomed by this charming foyer with elegant beige walls that match the console table on the side topped with a large mirror. Images courtesy of Toptenrealestatedeals.com. 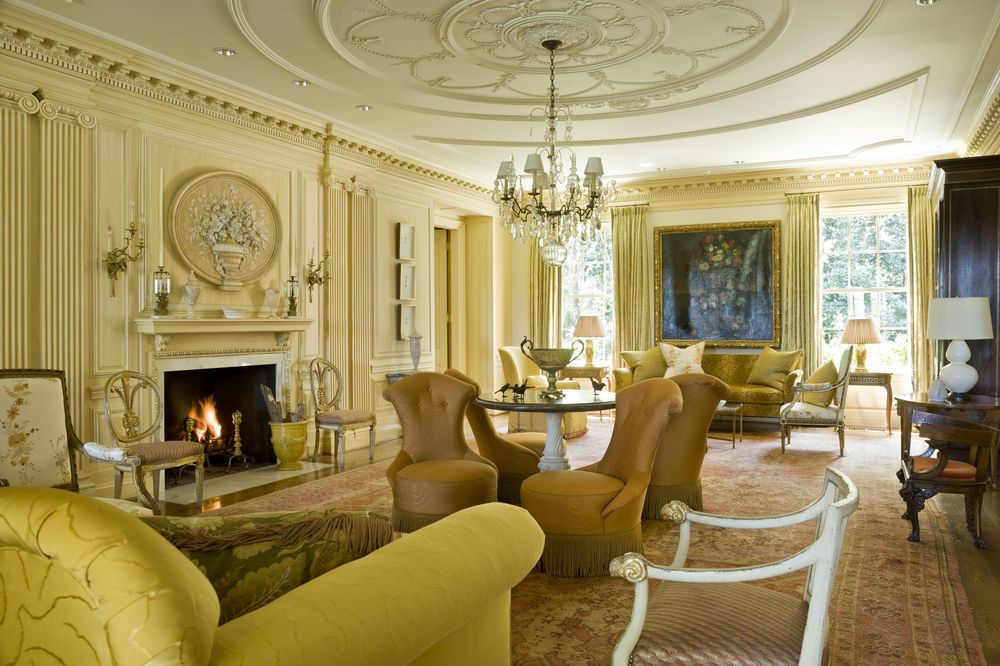 This is the spacious and elegant formal living room with a large fireplace in the middle. It has beige sofas, beige walls and ceiling with accents and a chandelier.Images courtesy of Toptenrealestatedeals.com. 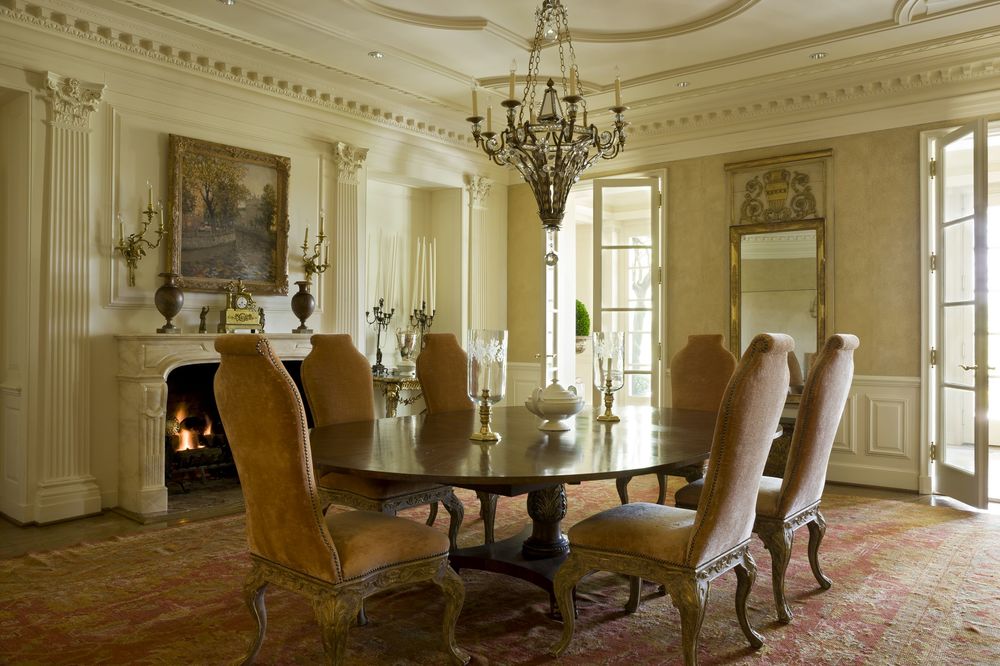 This is the formal dining room that has a large elliptical dark wooden dining table surrounded by cushioned chairs and warmed by the fireplace that is topped with a classic painting. Images courtesy of Toptenrealestatedeals.com. 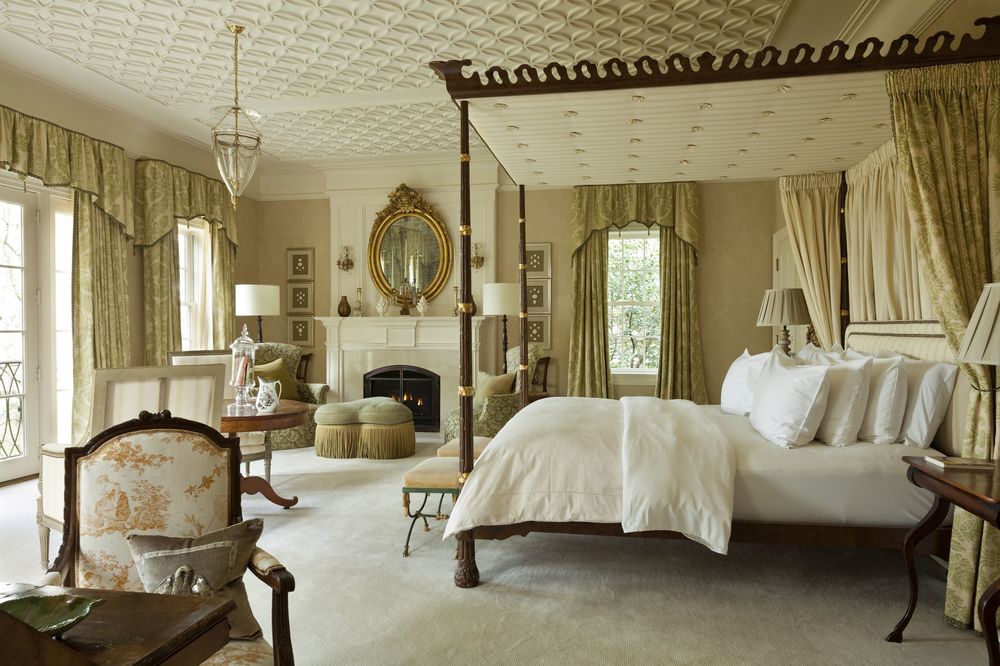 The primary bedroom has a beautiful four-poster bed and a charming patterned beige ceiling that matches with the walls and the fireplace mantle. Images courtesy of Toptenrealestatedeals.com. 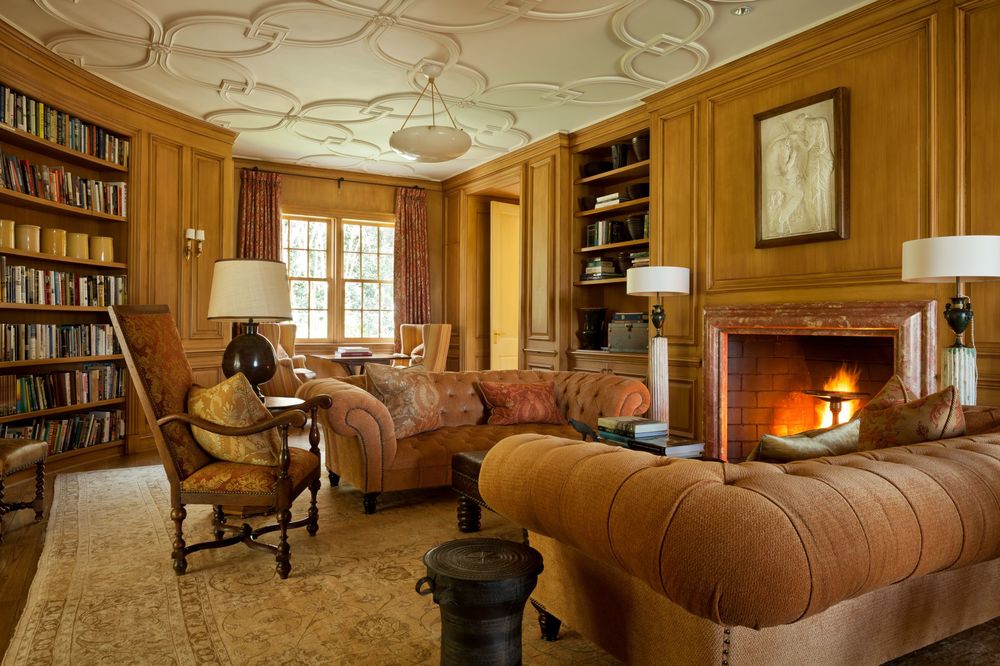 This is the charming and sophisticated library that has its own intimate living room with brown sofas beside the large warm fireplace. Images courtesy of Toptenrealestatedeals.com. 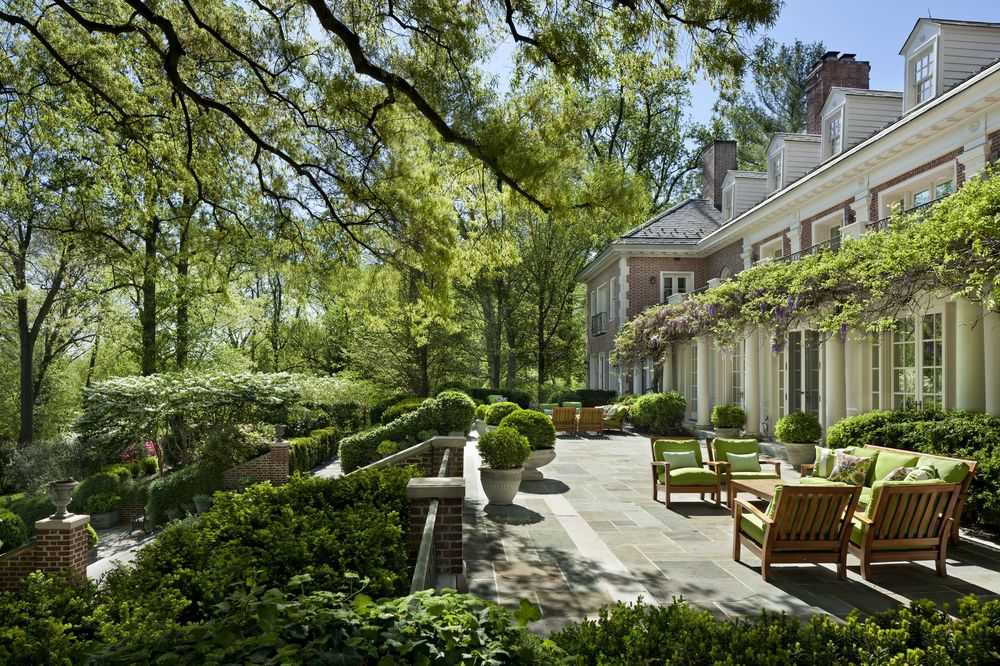 This is the large outdoor patio on the side of the house with a comfortable sitting area facing a scenic view of lush landscaping filled with shrubs, tall trees and potted plants. Images courtesy of Toptenrealestatedeals.com. 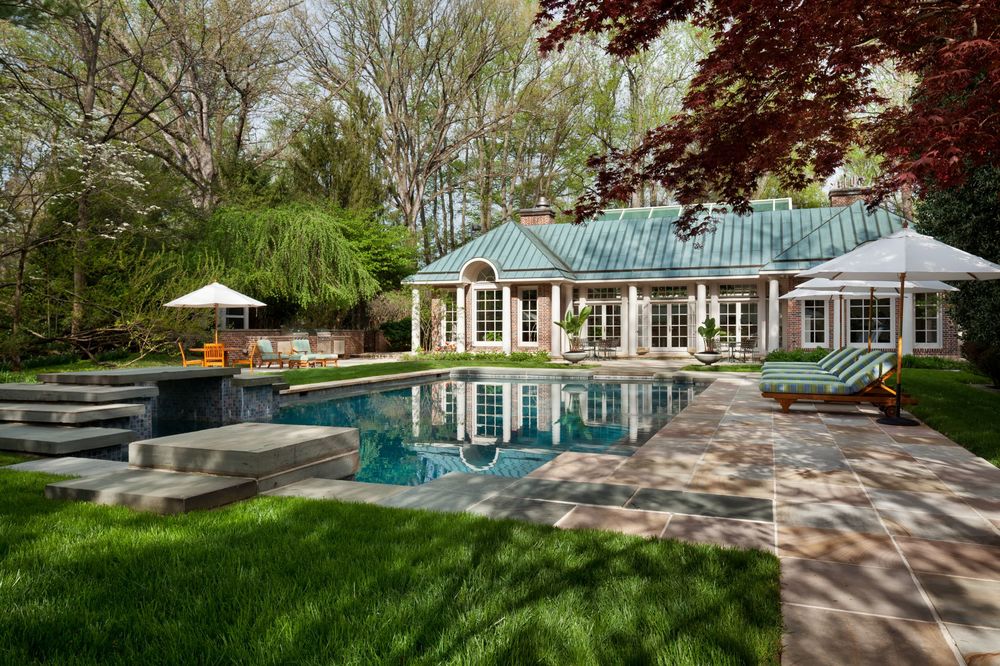 This is the gorgeous pool surrounded by concrete walkways, lush landscaping and a large pool house on the far side with a beautiful blue roof. Images courtesy of Toptenrealestatedeals.com. 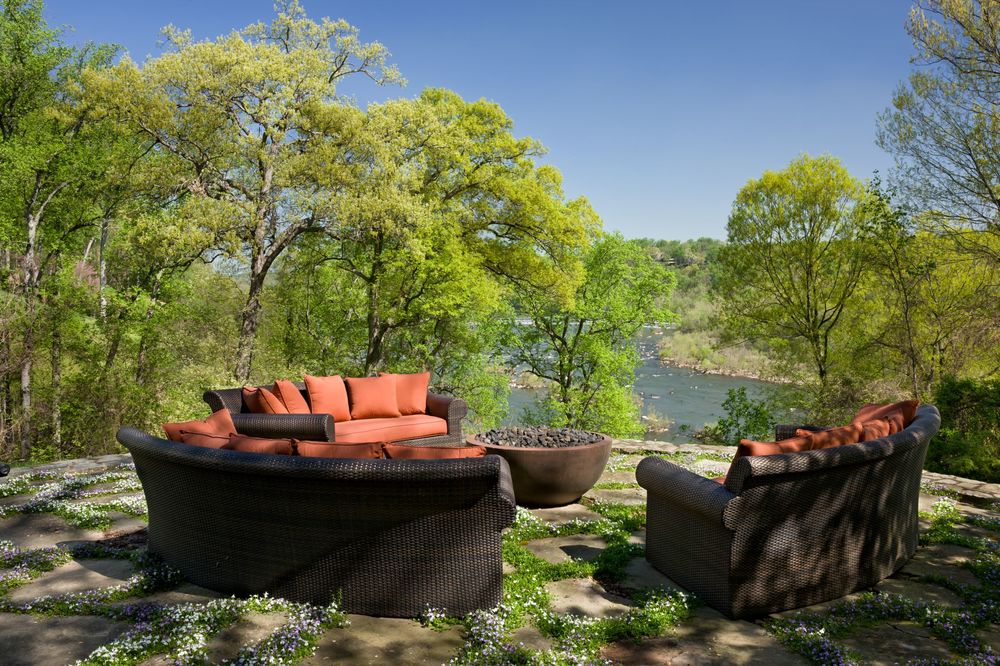 There is a corner of the property fitted with a firepit surrounded by dark brown woven wicker sofas and has a beautiful overlooking view of a serene landscape. Images courtesy of Toptenrealestatedeals.com.

Aside from the events of that grim day, Jacky O remains a symbol of American style and grace. She passed away in 1994 at the age of 64. Many people suppose that the extreme emotional trauma she sustained took at least a decade off her lifespan.

Today, Mrs. Kennedy’s home, the Merrywood Estate, is up for sale marked at $49.5 million. The 23,000 square foot mansion holds 13 bathrooms and 9 bedrooms, dining terraces, and a complete outdoor kitchen. The home is four stories tall and each floor is serviced by an elevator. It was built in the classic Georgian style and has been renovated extensively to preserve its original architectural details right down to the ornate plaster moldings that give the home so much style.

The aforementioned moldings are the signature feature of this classic, historical structure and they run throughout the building with exquisite detail in every single room.

The living room is as much for family comfort as it is for political deal making. The ever present molding takes the form of a stately looking lotus flower on the ceiling and horizontal bars which seem to form pillars astride the stately fireplace. The décor of the room itself is as American as it is suggestive of classical Roman settings in both form and coloration.

A formal dining room bears the same styling and color palette of the living room, but it is smaller and somewhat more dimly lit.

The primary bedroom features the same light beige and white that is common throughout the house. But the moldings are entirely different. Rather than emulating stately pillars and crests, a solid pattern of overlapping circles and diamonds cover the ceiling completely. The king sized bed is as massive as it is delicate with high and fine framework suspending a romantic canopy straight out of a classic Hollywood romance film.

The library is a true departure from the design of the rest of the home with its solid elmwood walls. The colors are darker, but light for a space that was clearly meant to look darker in comparison to the rest of the home. Two deep love seats appear luxuriant, yet seem to resist reclining – after all this is a place for study, not repose.

Outdoors, we find spaces that are as stately as they are verdant with complex plantings, charming tile work, and simple, inviting furnishings. In the back, a massive pool lies in the center of a deck of sufficient size to accommodate dozens. A diving platform made from layers of granite tile invites the bold to show off their form.