Rose Manor -- former home fashion's Eileen and Gerry Ford and previously named Belle Mead -- hits the market at $15.5. million. This elegant mansion sits on 2.4 acres of land in the Hamptons of Long Island, and boasts 15,700 square feet, 31 recently-updated rooms, and a six--car garage. 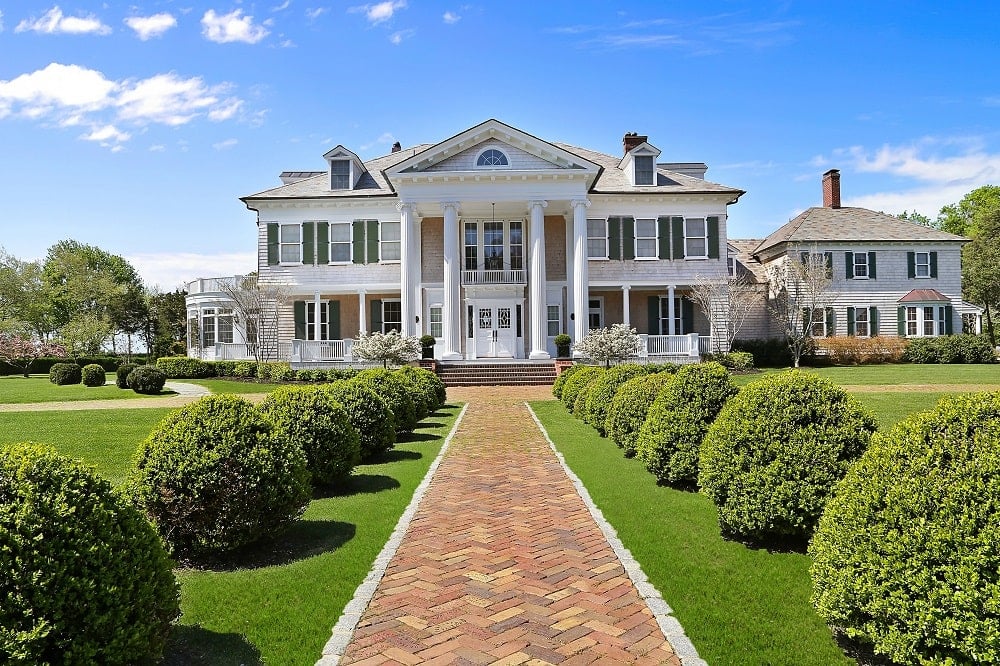 Eileen and Gerry Ford’s Rose Manor home in New York is on the market for $15.5 million. The founders of Ford Model Agency, which was a top player in ushering in the era of the supermodel, first bough the mansion in 1956. For a time, the house was also used to housetop models from the agency.

Rose Manor, formerly known as Belle Mead, is one of the last remaining relics of the Gilded Age — a summer “cottage” that has stood the test of time. It was built by society architect Stanford White in 1906 and was one of his last designs before his murder in June of the same year.

When it passed into the hands of Eileen and Gerry ford in 1956, they added a few additions to house some of their top models after their modeling agency became an international powerhouse. The mansion switched hands again in 2010, and was then updated; three years of updates replaced the electrical and plumbing, and revamped much of the interior, bringing it into the 21st century with strength and elegance. The latest updates to revamp a historic property and structure bring the listing today up to $15.5 million.

The mansion, now named Rose Manor, is a sprawling 15,700 square feet and sits on 3.4 acres of land in Quogue, New York on the eastern end of Long Island, one of the villages that makes up the Hamptons and less than 100 miles from New York City. Excluding a new addition of a 2,000-square-foot carriage house that abuts the main structure and includes a six-car garage, the mansion boasts 31 rooms: 11 bedrooms, 10 bathrooms, five elaborate fireplaces, and a private media room. Throughout, the house is host to 17 separate heating and cooling zones.

The main entrance to the mansion opens on a stunning foyer, with a beautiful contrast between dark hardwood floors and crisp white walls, with a sweeping staircase leading to the upper floor. Much of the flooring is done in style; the dining room is host to a sleek black and white checkered floor, while the living and sitting rooms have an opened patterned flooring that is complemented by the broad swath of windows that make these rooms open and inviting. Contrast is used throughout the design of the house to add an eye-popping style to every inch of the interior.

Eileen Ford was, and is, a true icon in the fashion industry. She was the founder and co-order of the Ford Modeling agency, which today is still one of the world’s most prestigious and successful agencies that launched the careers of more than one supermodel.

She pulled together what would be a revolution in the industry, changing the business practices of the fashion industry, and creating standards of conduct that put the interests of models and their careers first. As the agency took off, her husband joined her in the business and became the financial backbone of their work.

While the mansion Eileen and Gerry Ford bought in 1956 is now over a hundred years old, a three-year overhaul has updated it elegantly into 21st-century structure and style. The 15,700 square-foot home is now on the market for $15.5 million.