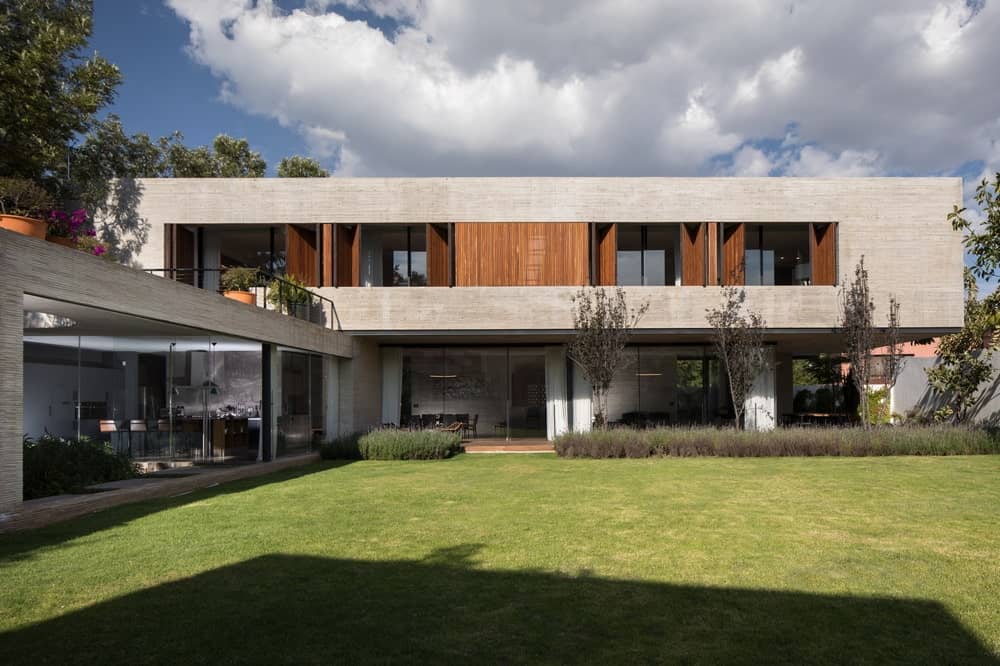 Casa Puebla displays a concept towards inside life where the visual motif is the Popocatépetl volcano, one of the most important natural icons in central Mexico.

The residence was conceived through inspiration regarding the aesthetic values of Mexican culture translating them into an avant-garde concept, in a fresh, contemporary and warm way, carefully selecting materials, as well as encouraging its residents to live both on the inside and to the outside through the openings towards the garden. Color and material palette seeks to blend architecture with its context, being an implicit tribute to the volcano.

Volumetric design is defined according to the intersection of two rectangular volumes, creating an L-shape structure. The volume scheme is perceived as a visual contradiction, where the heavier looking block was intentionally set on the lighter looking one, placing a closed concrete volume on top of one made of glass, generating a contrasting visual dynamic.

When approaching the house, the exterior can be perceived as blind and private, with a solid character that does not allow to see inside, however, upon entering the residence, a fluid and continuous space can be experienced, which opens to the exterior grounds and landscape, dissolving the boundaries between outside and inside.

One of the startling facts was that the location of the lot was compromised towards east and west, so on the upper floor, the roof overhangs 5 to 6 meters as a shading strategy, specifically with the intention to safeguard social areas.

At the entrance, a volume was defined as a double-height space that becomes the distributor of the project, both horizontally and vertically. In this area, the staircase becomes one of the main design details, thanks to its concrete structure and floating wooden footprints.

On the ground floor, the social and service areas were defined, where the distribution unifies the living and the dining rooms, being in direct communication with the kitchen, and offering an integral and transparent living experience. At the social area, large sliding glass doors were designed to join interior and exterior spaces, increasing space considerably according to specific needs or requirements, which encourages family interaction and is ideal for social gatherings.

On the upper floor, the private areas are located, including the family room and bedrooms. On this level, wooden shutters were used as sun protection for the rooms.

The material selection was based on the use of exposed textured surfaces to follow in a subtle way the regional tradition of tiles with identifiable textures.

Clearly, the board form concrete texture walls define a solid architectural identity for the house. Also, concrete joins wood on floor and wall applications, creating a contrast effect between both materials. It is worth noting that the light and shadow effect achieved on concrete walls due to natural lighting is one of the main design intentions, creating harmonious environments with great visual impact.

To promote interior space continuity and flexibility, a creative structural solution was proposed to reach an 8- meter span without having to use a post-tensioned slab structure. Considering this matter, a 20-centimeter double slab with intermediate rebar structure elements with a 1.50-meter separation was designed and constructed, defining a slab height of 80 centimeters, which can be considered a concrete open slab system.

For the ground floor, the solution was to use a structural hybrid system of steel columns that includes a concrete core, which solves the open space and has a good performance in relation to seismic events, and at the same time providing the necessary support for the upper floor which has a greater structural load. Likewise, this column system allows having an open social area and greater privacy in the family area.

The construction process is traditional, and even artisanal, taking special care during the casting process and finishing of all concrete elements, due to its final finishing condition and being one of the main design materials for the project.

Natural light is essential inside this house defining interior environments naturally lit, minimizing artificial lighting which decreases interior space temperature and energy costs.
To promote cool and shaded spaces, several reflecting pools, water features, and extensive vegetation were defined both for the garden and entrance, which contributes to thermal sensation improvement and encourages the use and appropriation of exterior spaces.

Regarding facades, double facades were used as solar protection, creating intermediate areas that serve as ventilation spaces or as terraces. Following the same intention, a series of shutters were used on the upper floor to avoid solar incidence over the building, which allows the architecture to transform from a completely blind facade to an open one, an interesting effect that is defined according to its inhabitants’ needs.

We are an architecture and innovation office, we are dedicated mainly to the development of architectural and executive projects, we are pioneers in the implementation of high-performance software which makes us leaders in the branch and a high internal infrastructure that leads us to develop high-quality projects

We work as a team of architects with different profiles and with external collaborations of architects, engineers, and real estate developers, achieving a high degree of specialization in each project phase.

In our office, we recognize that architecture is generated by people’s needs and an understanding of the physical context, culture, and climate of each place and region. We believe that architecture must be created from the sum of the elements that define a building: the structure, the form, the relationship with its context, the materials and its capacity to provoke sensations in its viewers and users.

As a team, we have a highly personalized service with which we offer a detailed approach to the project and according to specific needs. We work with the intention of questioning prior conceptions and trying new methods. The process of reinvention is an essential part of our design method, coupled with our duty to design responsibly and consciously.

Our design considers shape, color, and texture, and seeks to frame a contemporary architecture that awakens people’s interest in architecture and the use of space for which it was created, without forgetting the respect that habitat deserves and always emphasizing the importance of pedestrians, the relationship of the building with the street, the sidewalk, the environment and its relationship with the building and its location.