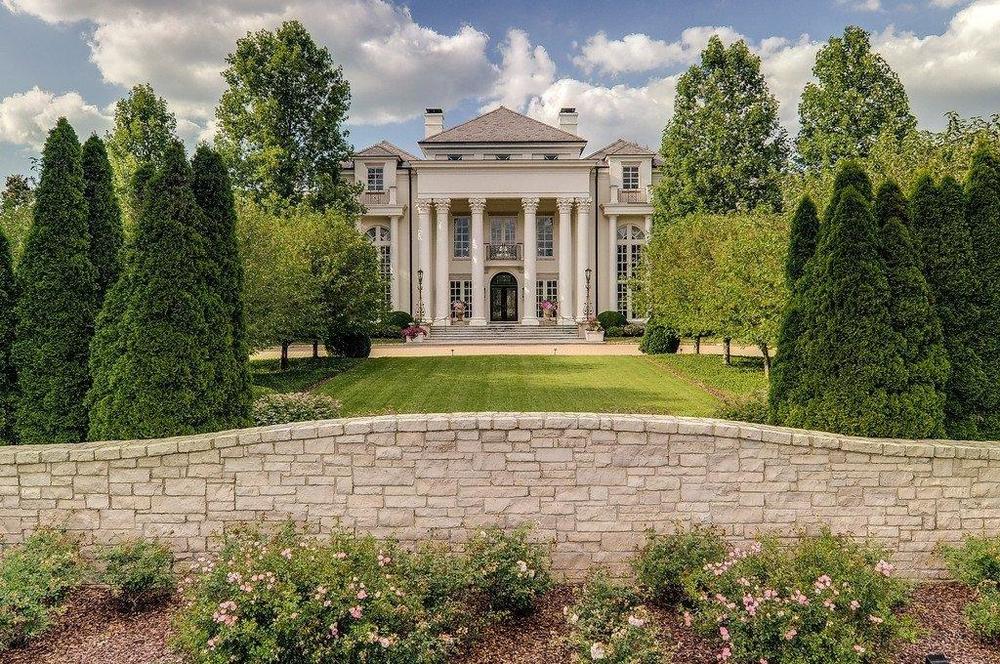 The lovely Bella Rosa Mansion is located in Franklin just outside of Nashville with marvelous gardens and opulent residence. This mansion is now listed with a reduced price of $13.5 million.

The property has over 22 acres of landscaped land. The mansion is measured at 19,000 square feet with four bedrooms, nine bathrooms, a hidden elevator, a wine cellar, a screening room, and a wood-paneled library. It boasts of vaulted 24-foot ceilings, stone columns, a hand-carved Macedonian marble fireplace, and wood floors inlaid with marble.

Back in December of 2012, rumors were flying that Johnny Depp was buying a Nashville area mega-mansion for his new girlfriend, actress and model Amber Heard and with whom he became engaged on Christmas Eve of 2013.

But apparently that transaction got lost in the shuffle due to squabbles about prenups and it’s back on the market awaiting the next A-Lister to take notice. After all, Depp, never having a shortage of places to stay, has almost as many homes as he does ex-girlfriends and spends much of his time at his homes in France and England and at his private Bahamian island.

Franklin, Tennessee is a bedroom city of Nashville where many music stars reside due to the privacy of large acreage farms where they can enjoy having their own personal palace, keep their horses, and entertain their celebrity peers without gangs of paparazzi breathing down their necks. Franklin is a quaint historical small southern town still entrenched in its Civil War roots and very proud of the battles fought there.

A lone statue of a Civil War soldier stands in the town square standing guard, should the townspeople need protection from marauding liberal Yankees. Franklin has been or is home to the likes of Kenny Chesney, Billy Ray, Miley and Trace Cyrus, Alan Jackson, Brad Paisley, and many music industry stars.

With Johnny Depp passing up the Bella Rosa estate, it opens the opportunity to other celebrities who like to be close to their recording studios. It also affords a lot of nearby mansion-hopping for parties with friends.

The wine cellar is temperature-controlled and has a built-in humidor and walls are paneled with onyx. There is also a screening room with ceilings that are said to almost glow and a Creston system to manage the house. The pillars surrounding the rose garden were repurposed from an 1800’s Franklin church. For more information.

Now awaiting its next owner, Bella Rosa, with its marvelous gardens and opulent residence just outside of Nashville, is now for sale. Previously listed at $17.5 million, the current list price is $13.5 million.