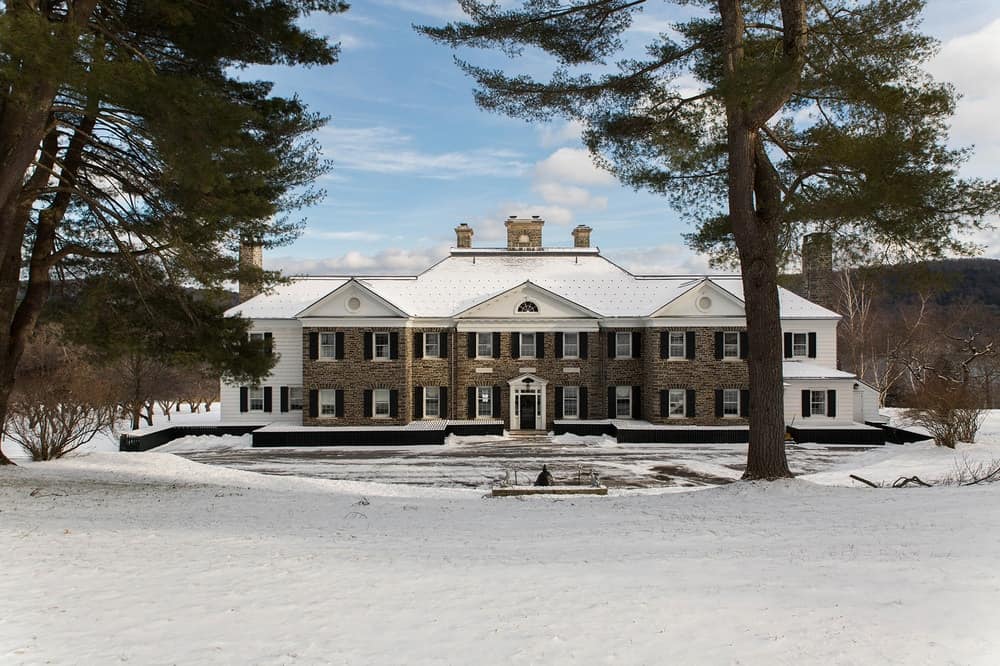 Anheuser-Busch has made inexpensive beers widely available in the US for over a century and a half. In the States, their products are commonplace, but the world over, they are looked on as luxury imports. The Anheuser-Busch family home in New York state reflects this legacy with style and class.

Anheuser-Busch is a brewing company based in the United States. Founded in 1862, they have been the parent of many popular beer companies for longer than most people can recall. Their list of beer production companies includes Budweiser, Michelob, Ultra, Busch, and others.

These are wildly popular low-alcohol content beers that are considered to be passe by many Americans. But in Europe, the beers these companies produce are looked on as luxury items. It just goes to show that the grass on the other side of the fence is always greener.

Speaking of green grass, the Anheuser-Busch family owns a beautiful estate on more than 600 acres of very green grass. In addition to the Busch family home, the property also contains the Baseball Hall of Fame.

The combination of America’s favorite beers and America’s pastime makes for a heck of a lot of visitors – which is probably the reason that the Busch family is selling their 12,000 square foot farmhouse on 18 acres for the listed price of just $7 million.

The home stands about 50 yards inland of the edge of the beautiful mountain body of water, Lake Otsego. It is a truly massive lake that looks a lot more like a river of epic proportions as it is much longer than it is wide. In fact, early settlers famously either confused it for a river or simply treated it as a river in their diaries since the task of crossing it was more practical than going around it.

From the air, the homestead looks rather humble. But it is a mansion, true to form, and holds six bedrooms, seven baths, with lavish sitting areas, living rooms, a stunning kitchen and dining room, and more.

The primary living space is as Americana as it gets. Simple, classic American couches and chairs stand on high wooden legs with floral print upholstery. The walls and molding bear the form of classical American statehouses but are painted in a soft green. The floor is white marble, and a fireplace of not overbearing size stands off to the right.

Moving through these rooms, one might agree that this is one of the most tastefully painted homes we have reported on. In the dining room, the walls are sky-blue from the middle-up, and from there down, they depict scenes of the American mountains and frontier – which are entirely appropriate for the Anheuser-Busch brand.

The furnishings in the dining room are refreshingly traditional, with all-wood chairs upholstered on the seat only. An entirely glossed oak table that seats six stands central atop a very quaint and traditional rug. A fireplace stands to the side, and the windows and molding are, again, classic Americana.

Possibly the most non-traditional and unique feature if this home is the outdoor sitting area. This space is furnished like a living room with traditional American style couches. But the bodies of the couches are made from weather-resistant wicker, and the cushions are also weather resistant.

It’s been nice to see the traditionalism this Busch family home adheres to, and it would be interesting to see their next home.