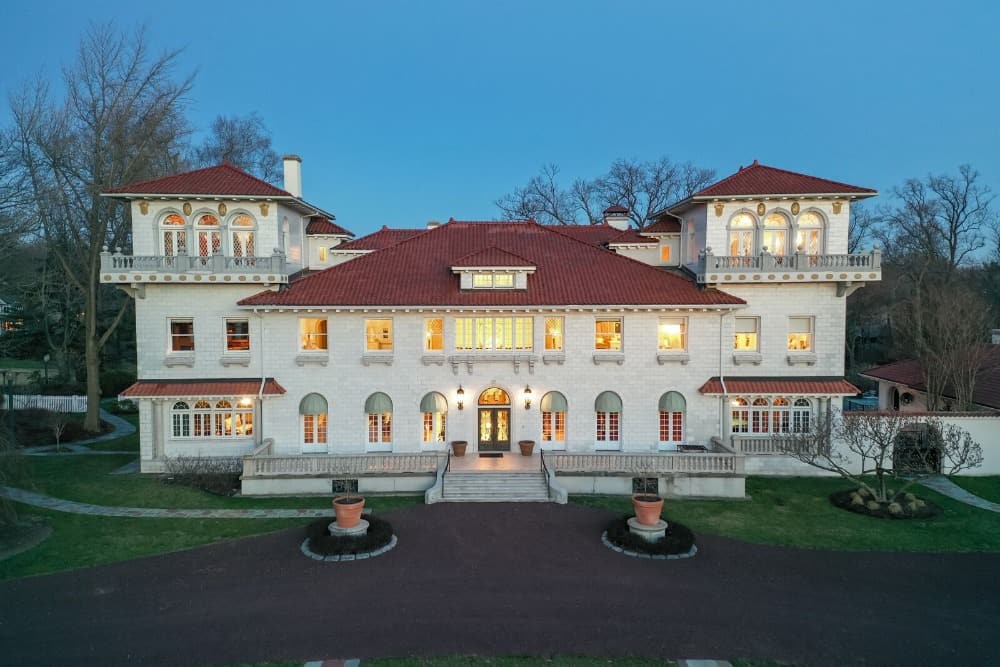 The love nest given to movie star Gloria Swanson by the patriarch of the Kennedy family is ornate, extravagant and on the market for $9.9 Million. The silent screen star was married to royalty when Kennedy gave her the mansion to keep her close by.

The 24,000 square foot New Jersey mansion that was a gift from Joseph Kennedy, Sr. to movie star Gloria Swanson is back on the market at a newly discounted price of $9.9 Million.

The 5-acre property is in the northern New Jersey town of Englewood. It features 8 bedrooms and 14 bathrooms and was built by a Polish count in the 1920s to resemble an ornate Italian villa. The mansion sits behind a gate on a property that includes a lake with a waterfall and cabana, an infinity pool and spa and lush landscaping. There is an eight-car garage and room for plenty of guests to park.

This home was built in the Renaissance Revival style with three-story towers at both ends of the building. The interior of the mansion is dramatic from the marble foyer with double staircases through multiple living rooms. The centerpiece of the kitchen is a floating island and the ceiling above it is crafted in stained glass. There is a home theater inside as well as a private gym and a home office. The Primary Suite is made up of three rooms and includes a sitting area with a fireplace and a marble soaking tub in the bathroom.

Silent-screen star Gloria Swanson received the mansion as a gift from Patrick Kennedy, Sr. in the 1920s. At the time Swanson was the most successful and highest-paid star in all of Hollywood – taking home about $20,000 a week. By all accounts, she lived an extravagant life and spent as much as she made. While married to Marquis de la Falaise, grandson of the founder of Hennessey Cognac, Swanson took up with Kennedy, father of the political dynasty of Kennedys including President John, and Senators Bobby and Ted.

They met when Kennedy,  a millionaire bank president, and Hollywood movie mogul, was introduced to Swanson as someone who could help her with financial troubles brought on by her spending habits. Kennedy reportedly bought the mansion for Swanson so that he could visit her whenever he was back on the East Coast. At the time the mansion was called “Gloria Crest”. The affair between Swanson and Kennedy would last for three years.

In the 1930s Gloria Swanson made the transition from silent movies to talkies but her career was in decline. She became a successful business owner after those running several companies including one promoting organic foods. Her comeback role on-screen in the 1950s was as aging star Norma Desmond in the Hollywood classic, Sunset Boulevard. Gloria Swanson died in 1983 at the age of 84.

The current price of $9.9 Million is a 75-percent reduction in price since the last time the mansion was listed, but didn’t sell.