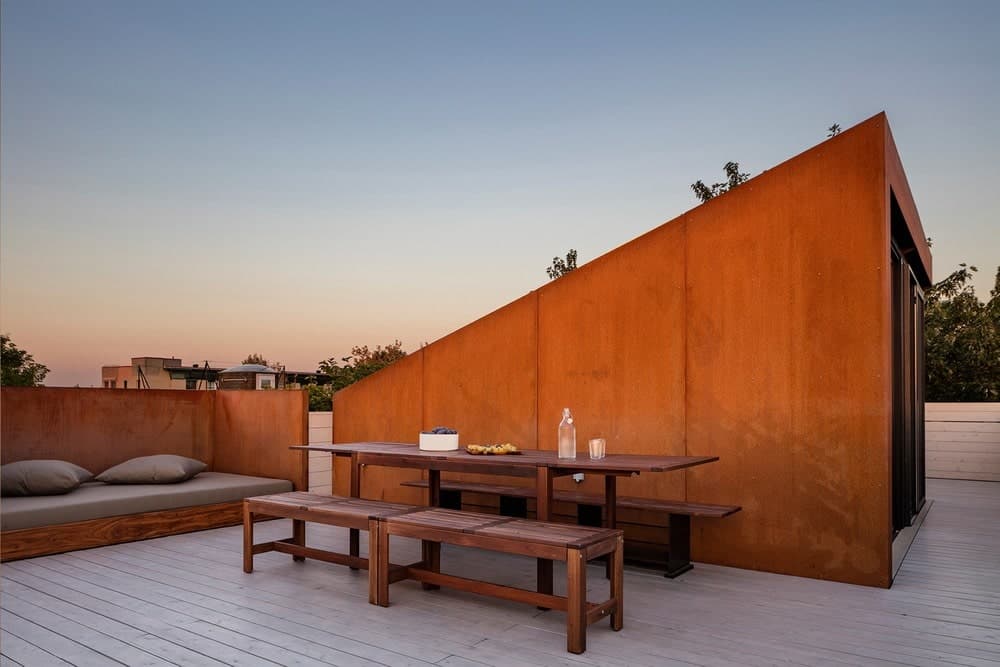 The yh2 architecture studio presents its new Maison Atelier, built in the backyard of the firm’s Maison Tour, built in 2000.

Over the last 20 years, the architectural firm has transformed this typical Montreal lot twice:

First, with the creation of the Maison Tour, a home/studio combination organized around an inner courtyard bracketed by a three-story vertical house and a workshop in a former garage at the back of the yard.

Second, with the creation, based on the existing building at the back of the yard, of a second three-story home, the Maison Atelier yh2, independent of the original Maison Tour.

The new Maison Atelier, completed in 2018, includes the yh2 offices on the ground floor and a new dwelling on the upper floors.

A lightweight structure on the second level links the two buildings, to comply with municipal by-laws prohibiting two detached buildings on a single lot. This aerial volume, made of patinated steel and glass, gives each house an extra room above the garden, without reducing the size of the courtyard.

The corresponding living spaces in each house are on different levels, giving both residences maximum privacy.

The Maison Tour’s ground floor living spaces open onto the courtyard, shaded by a large maple.

The Maison Atelier’s daytime spaces are on the top floor, providing unique views of urban rooftops and ample light in all seasons.

Accessed directly from the street, the yh2 architecture studio is located on the ground floor of the new structure, in two minimalist spaces featuring white concrete floors, mahogany paneling, and furniture in patinated and raw steel.

Above the studio, but with its own street entrance, the dwelling in the new Maison Atelier yh2 occupies the top two floors of the building.

The second floor, completely separate from the office, includes the bedrooms and family room. The composition of this cozy retreat is centered around the generous use of natural materials: brown wood floors, walls in pale hardwood and steel.

On the third floor, the living spaces boast expansive views of the cityscape thanks to large windows on three sides.

To compensate for the northerly orientation of the main façade, there is a large, glassed-in, southwest-facing penthouse on the roof, providing exceptional top lighting throughout the entire upper floor. Inside this brightly lit space, the living/dining room on one side and the kitchen on the other are open to each other, yet visually separated by a large raw-concrete wall. This wall/stairway crosses the house on all levels, from the ground floor to the rooftop patio. It serves as a backbone for the building as well as a vertical passage that brings the light from the penthouse along a circuitous route to all three floors.

On the roof, two patios are accessible from the penthouse, complementing the interior spaces and providing high-quality outdoor space, at once private and open to the city.

All built-in furnishings were custom-designed for the project: tables, bookcases, office storage, and furniture for the bathroom, kitchen, dining room and rooftop patio. Collectively these furnishings are an integral part of the architectural whole, and use the same materials as the rest of the project: steel – patinated, raw, white, perforated and stainless – mahogany and white marble.

The paired structures present a new urban residential model – an alternative to the traditional Montreal plex, in which dwellings are stacked on top of one another, leading to chronic noise issues.

The two vertical houses organized around the century-old maple are a green oasis in the heart of the neighborhood, despite their high-density character.

These are both spacious single-family homes with the privacy families demand, and a group of dwellings providing the high density needed to meet 21st-century urban needs. 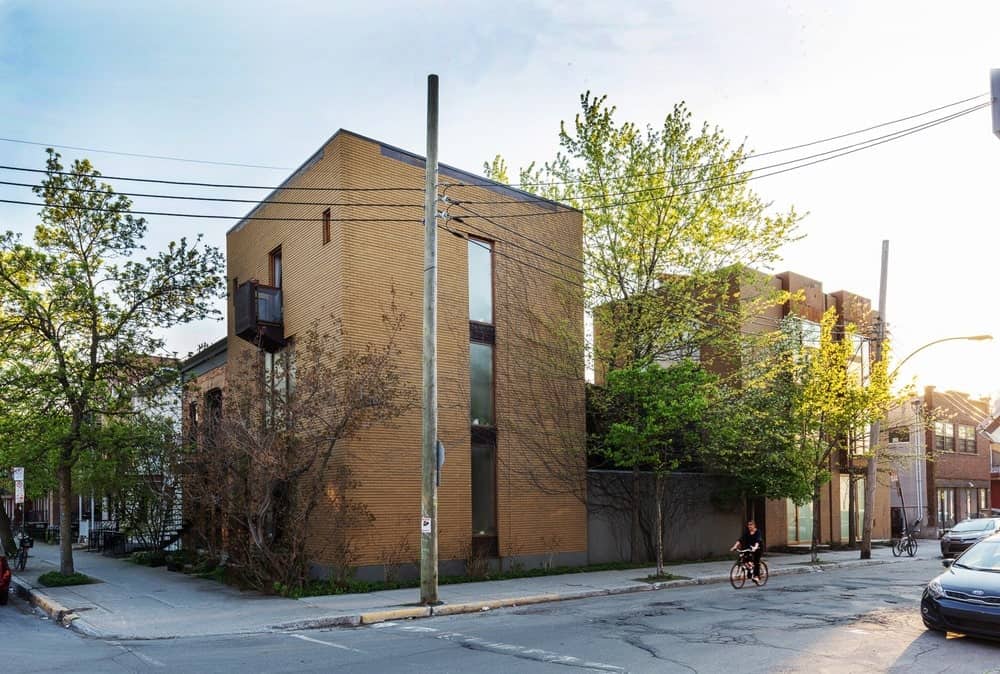 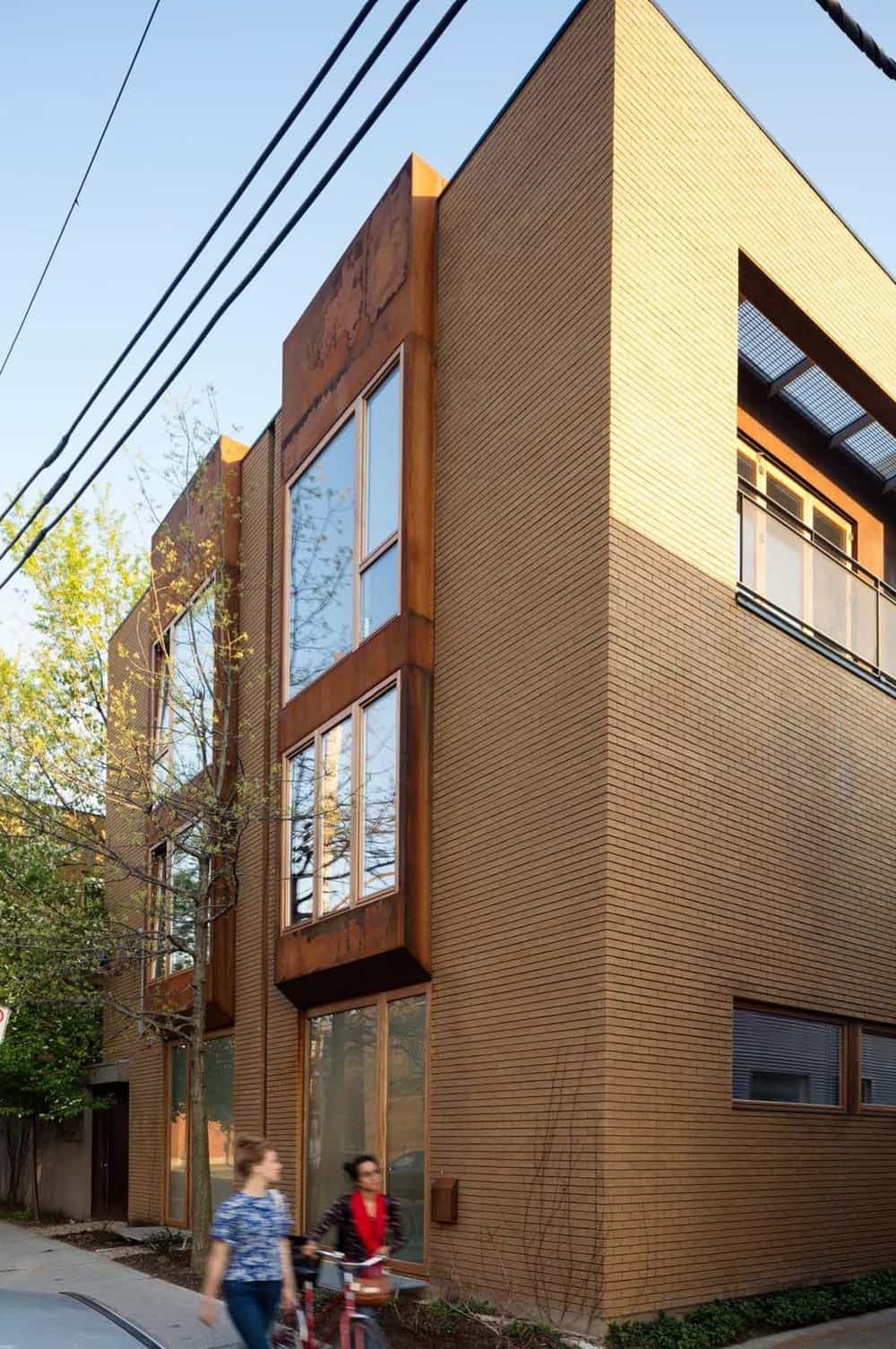 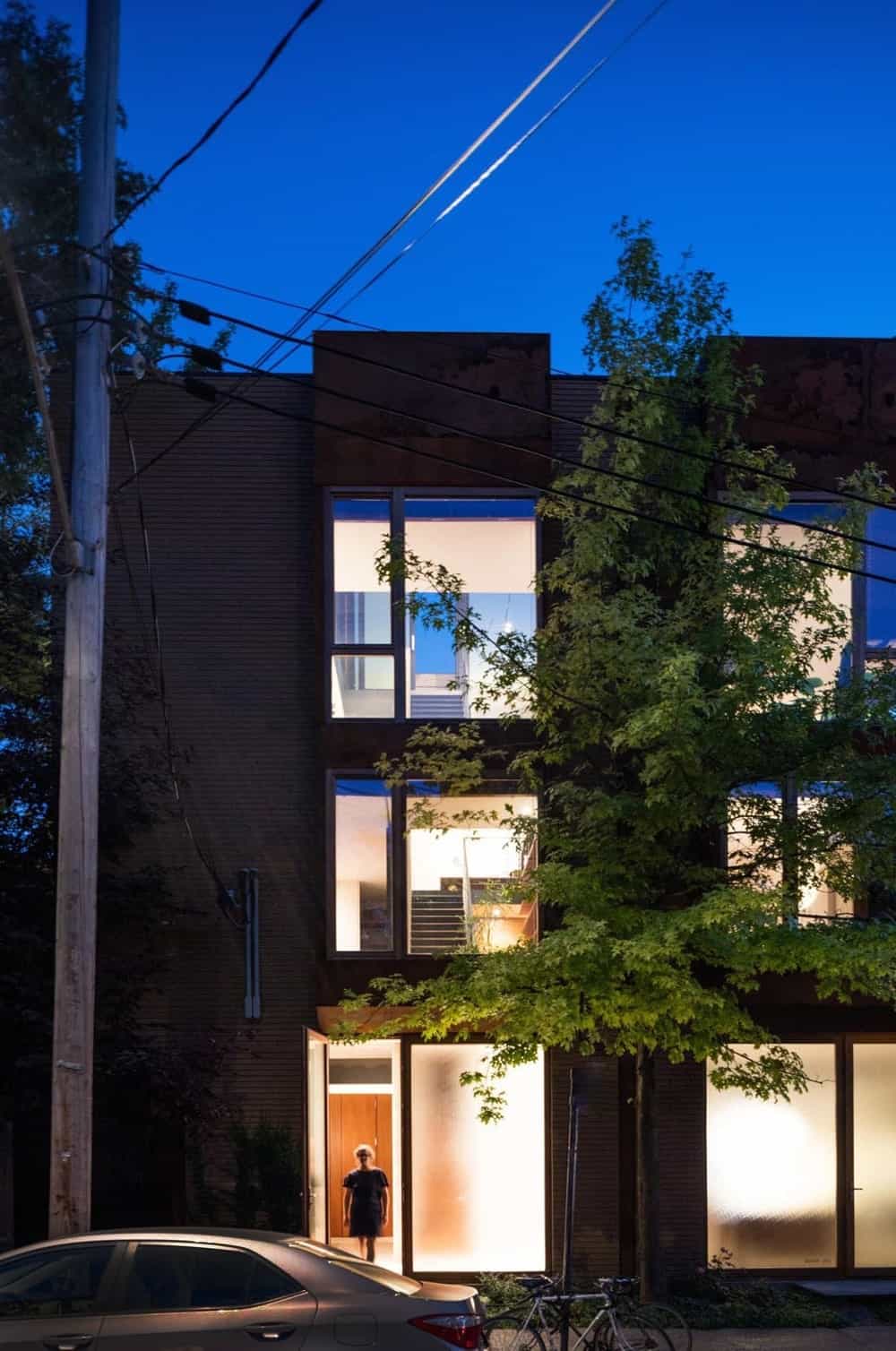 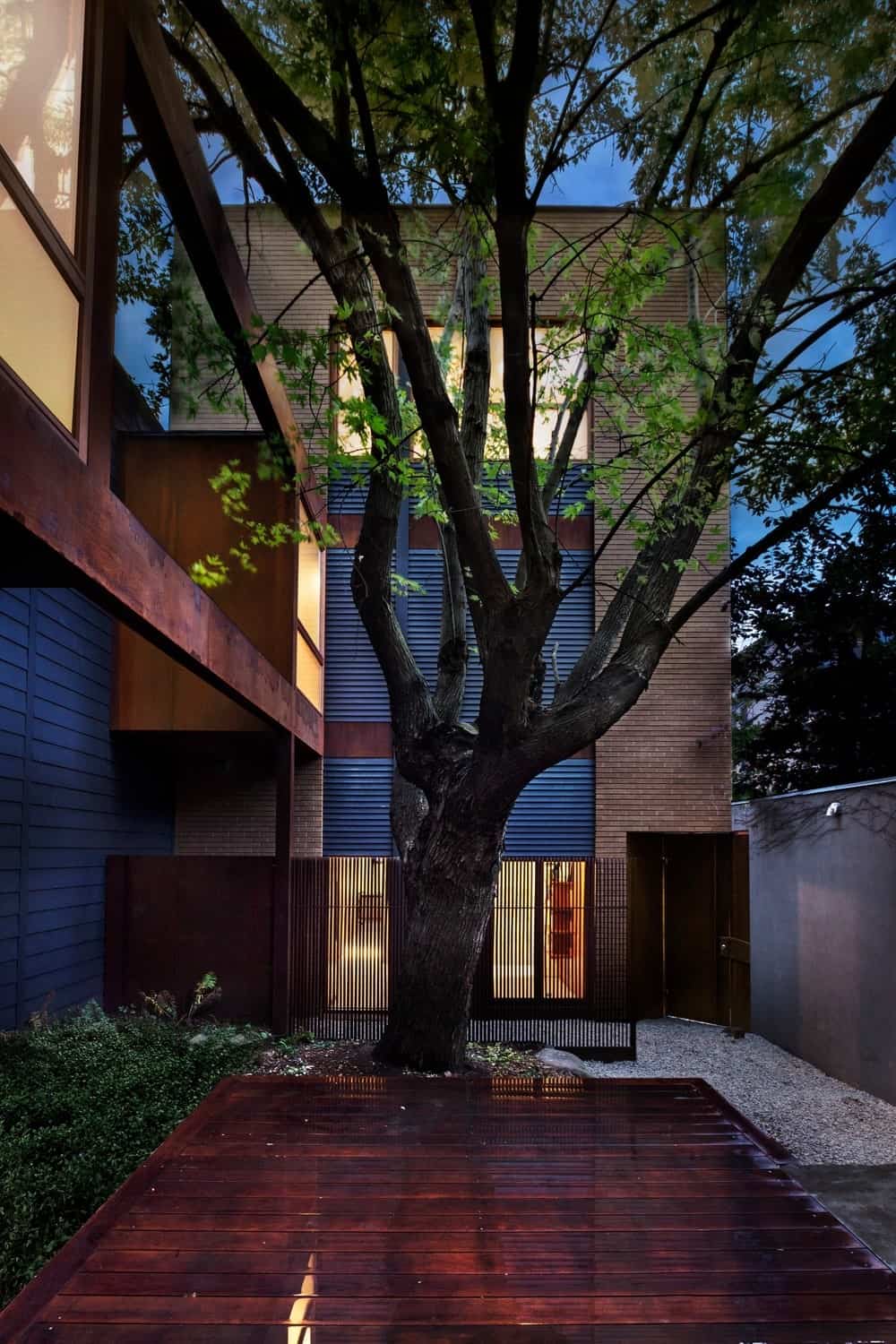 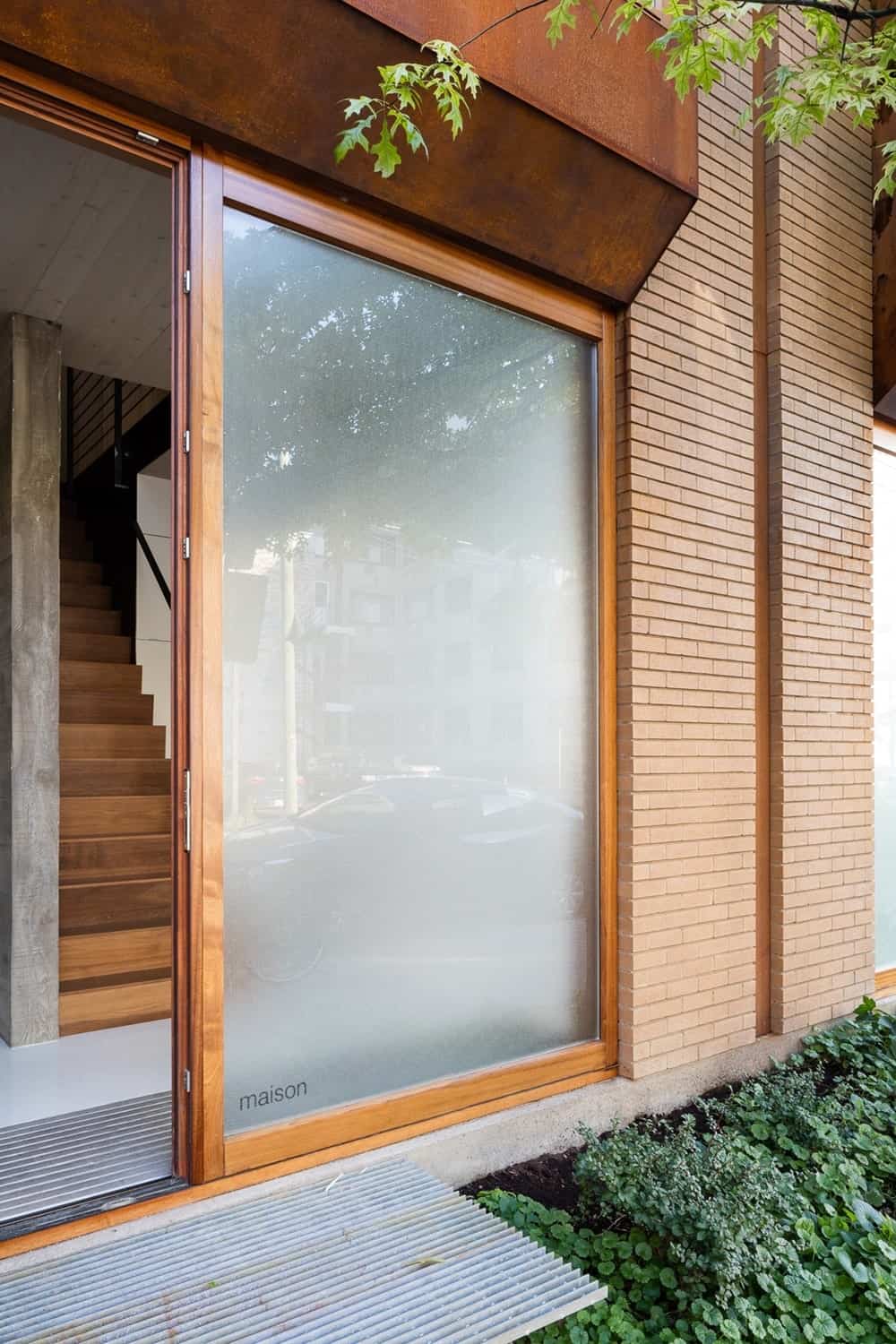 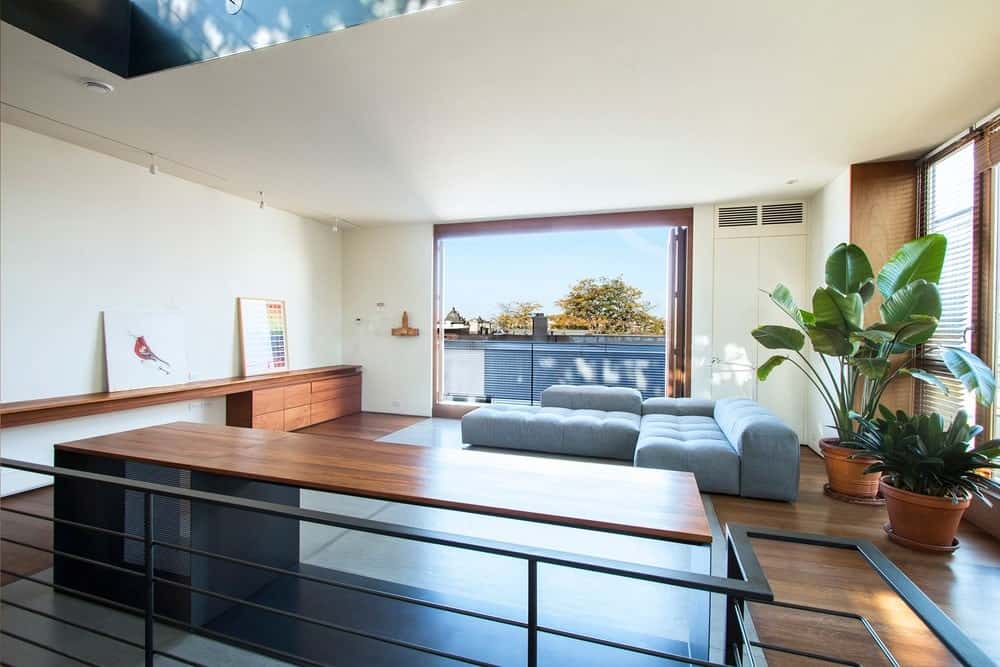 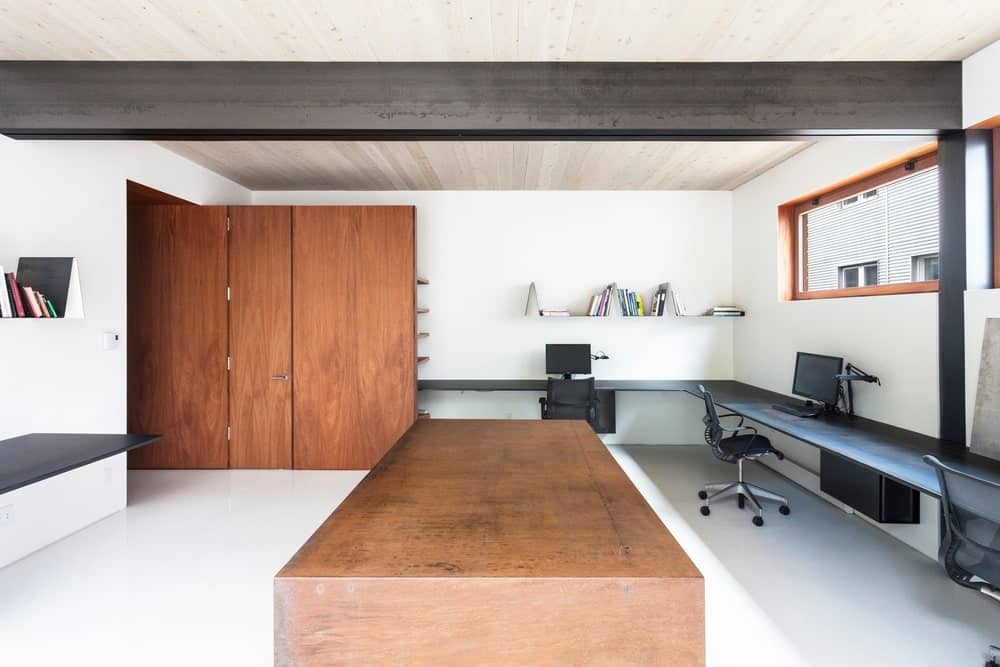 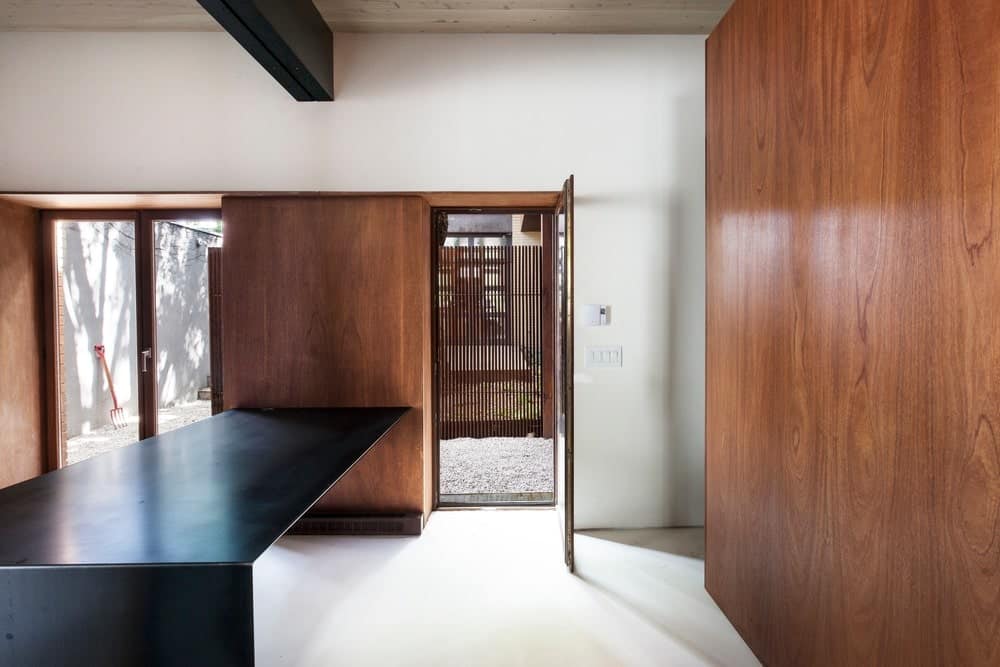 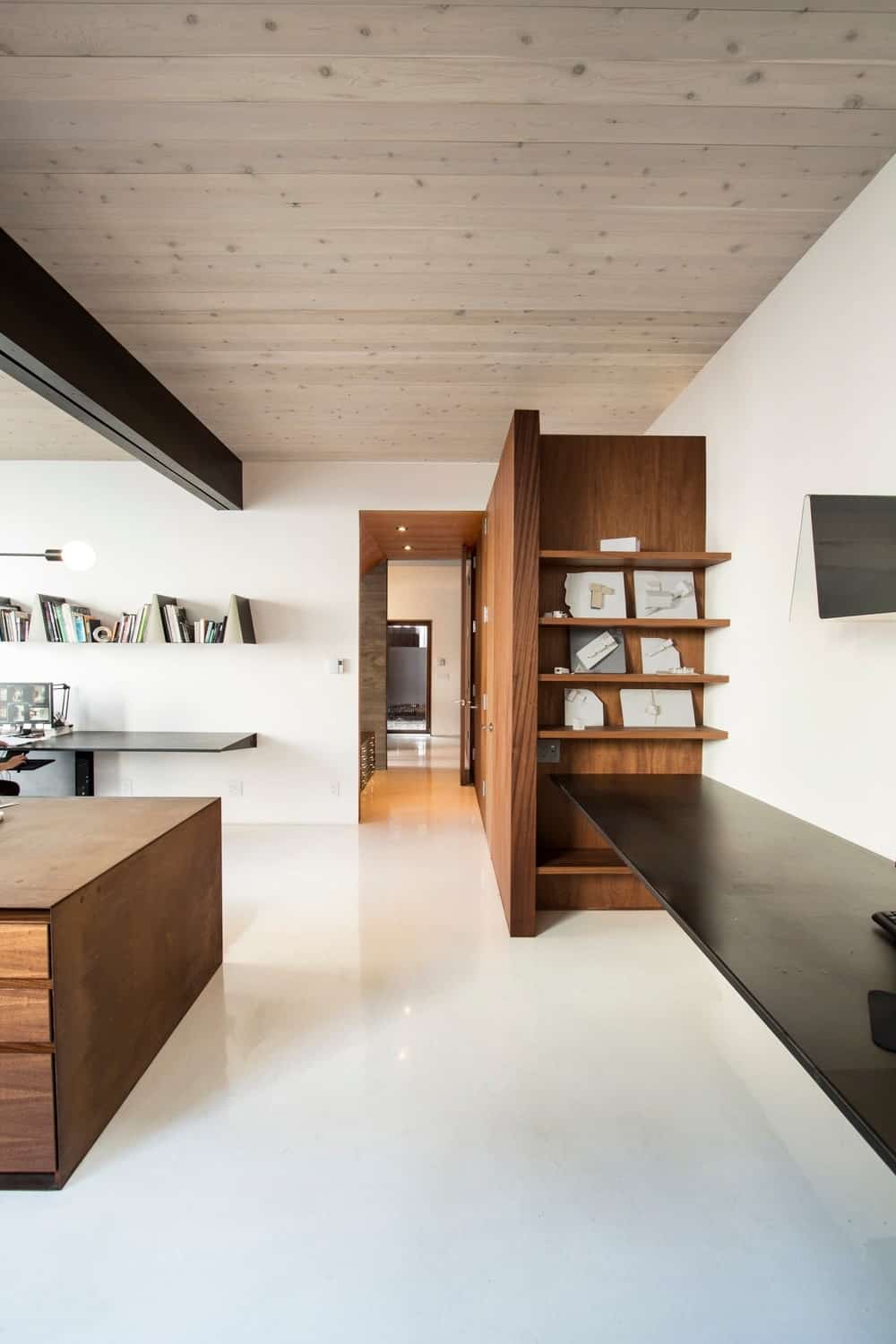 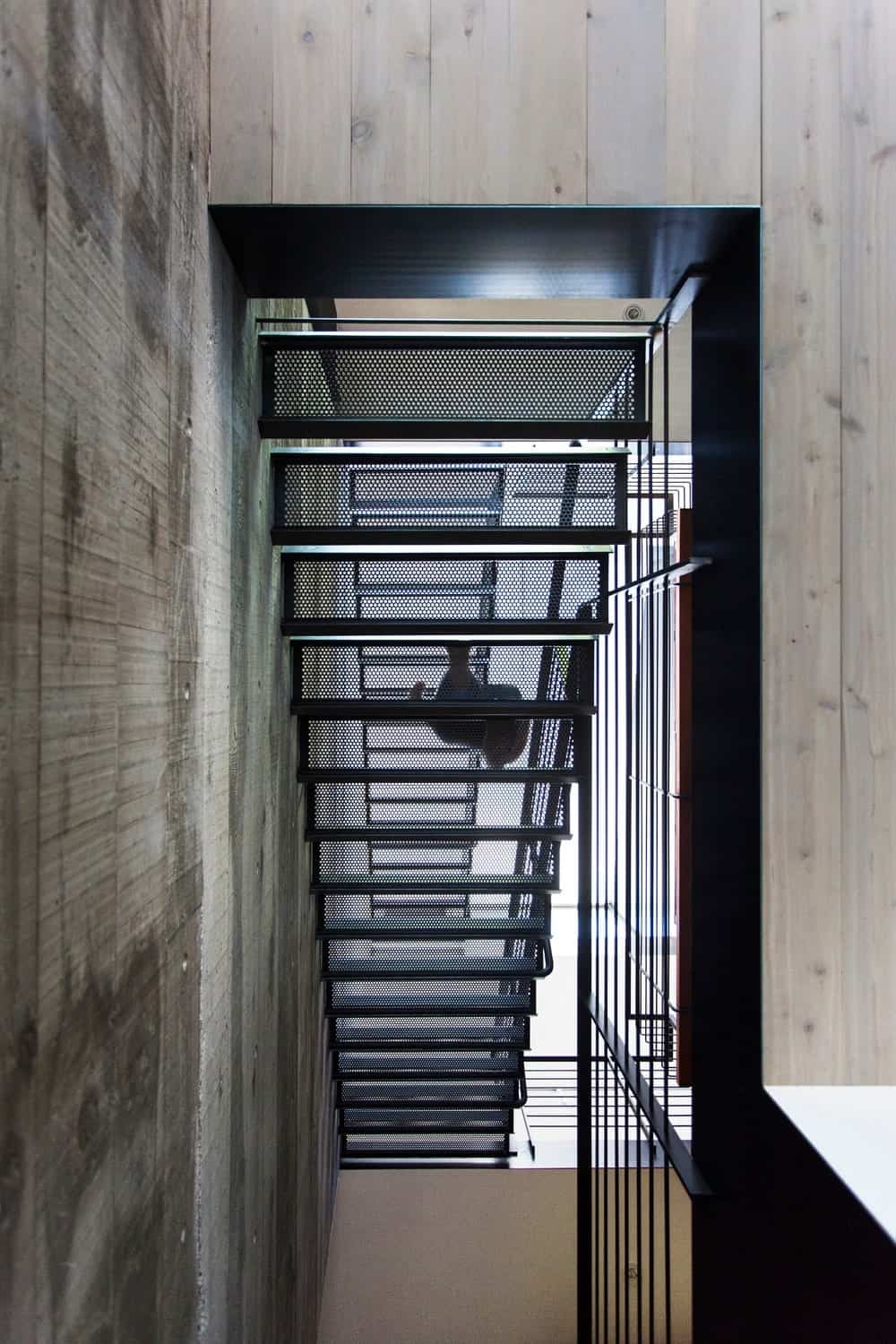 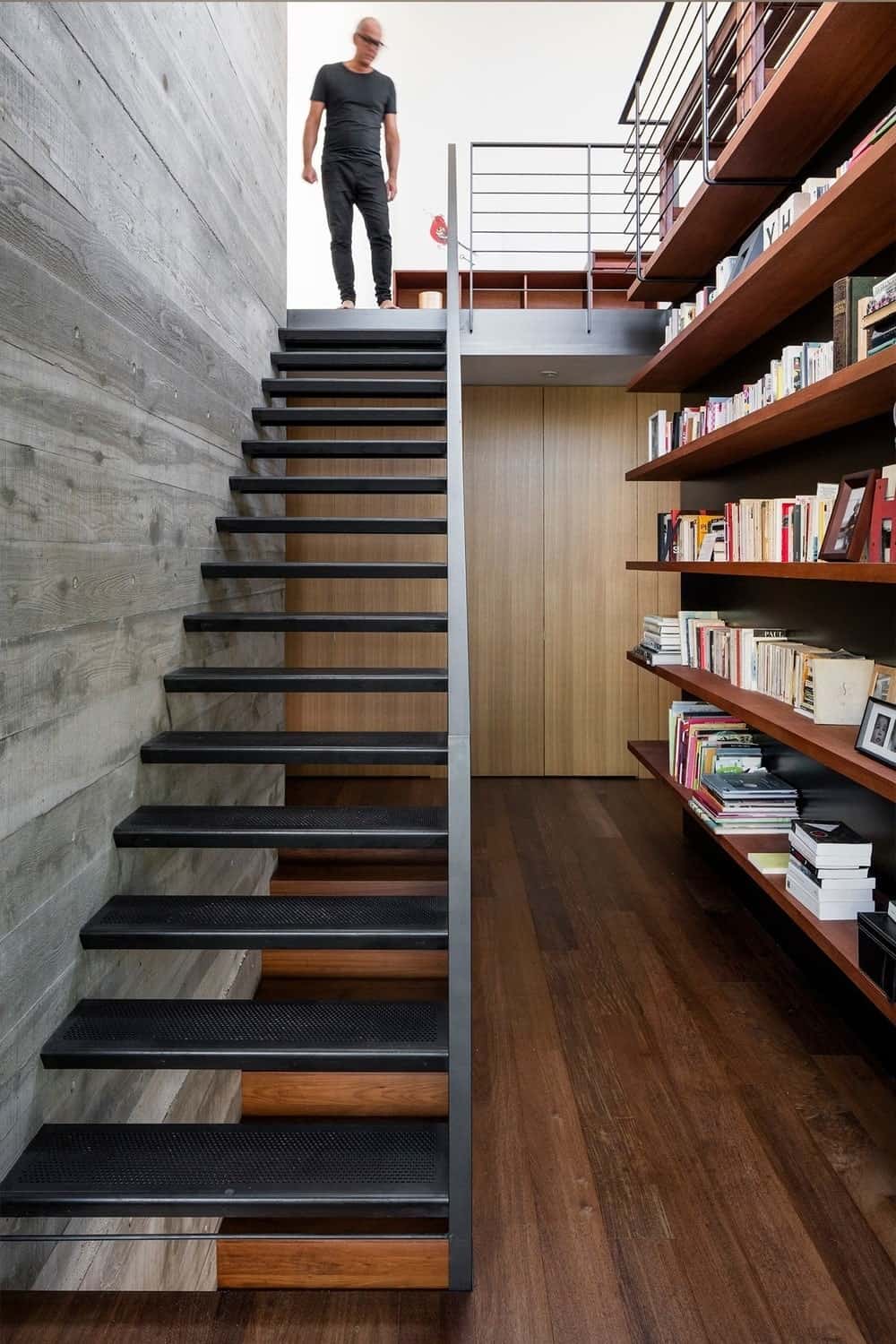 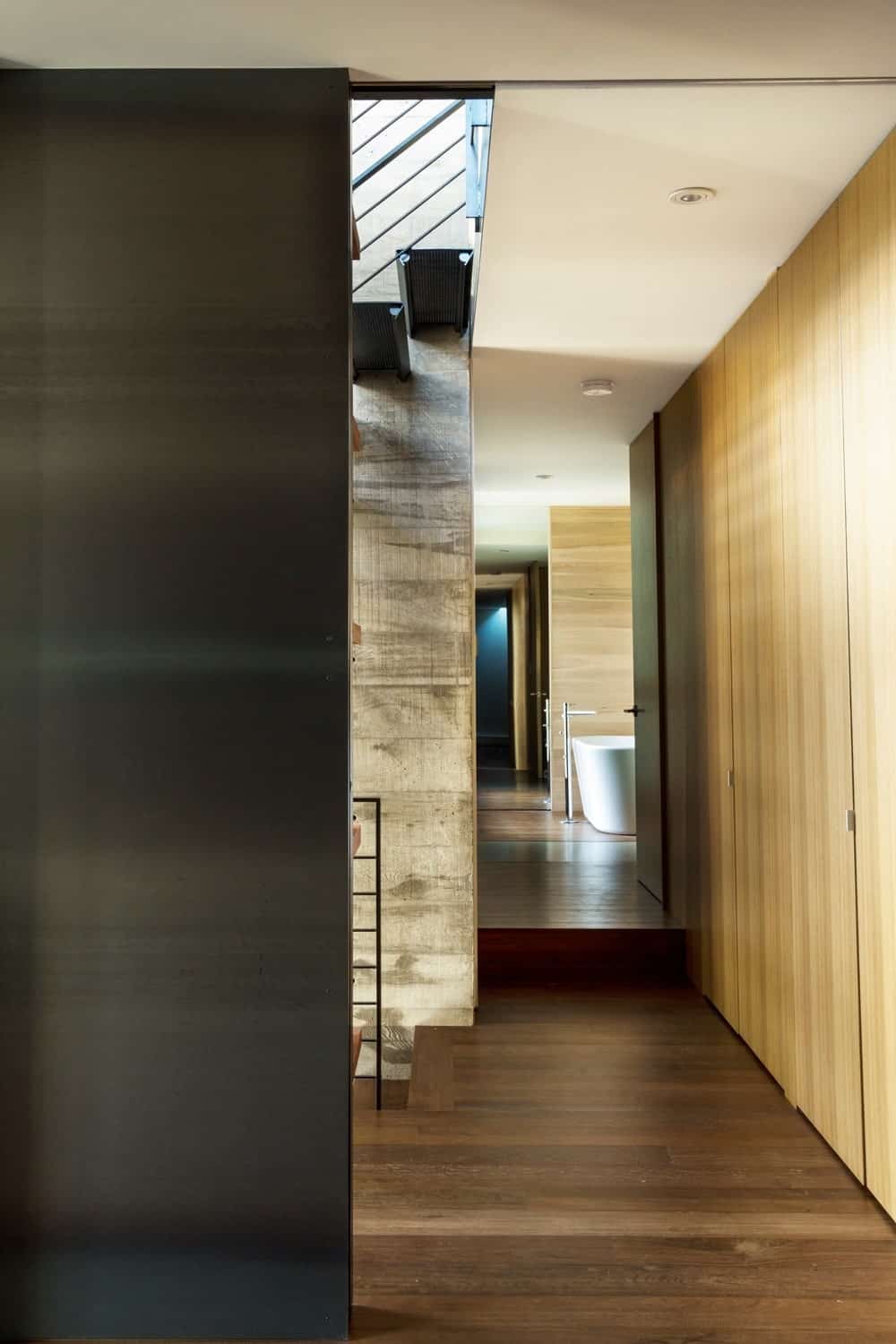 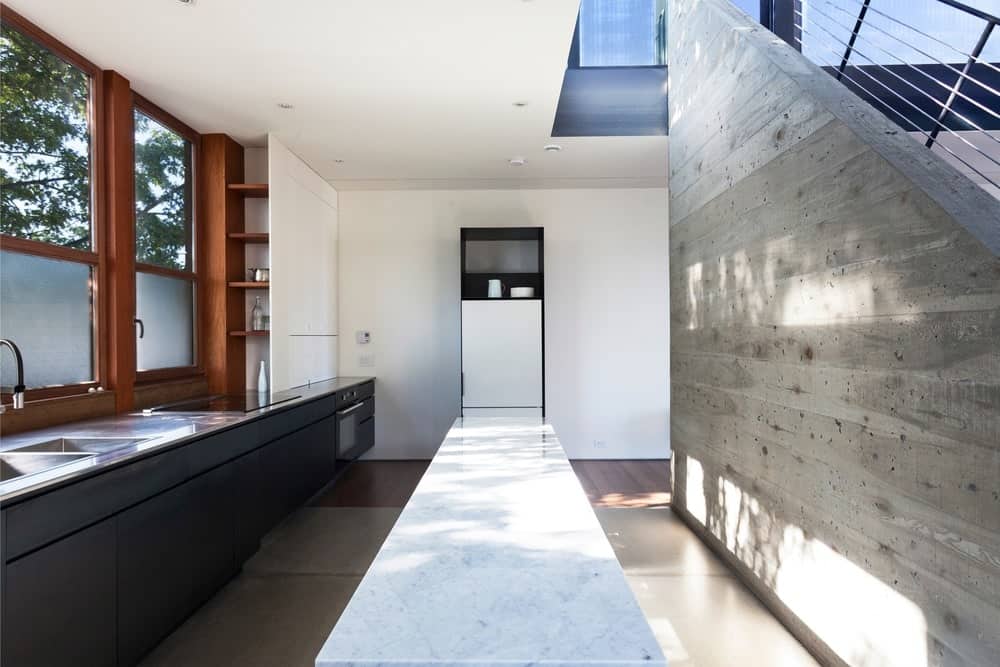 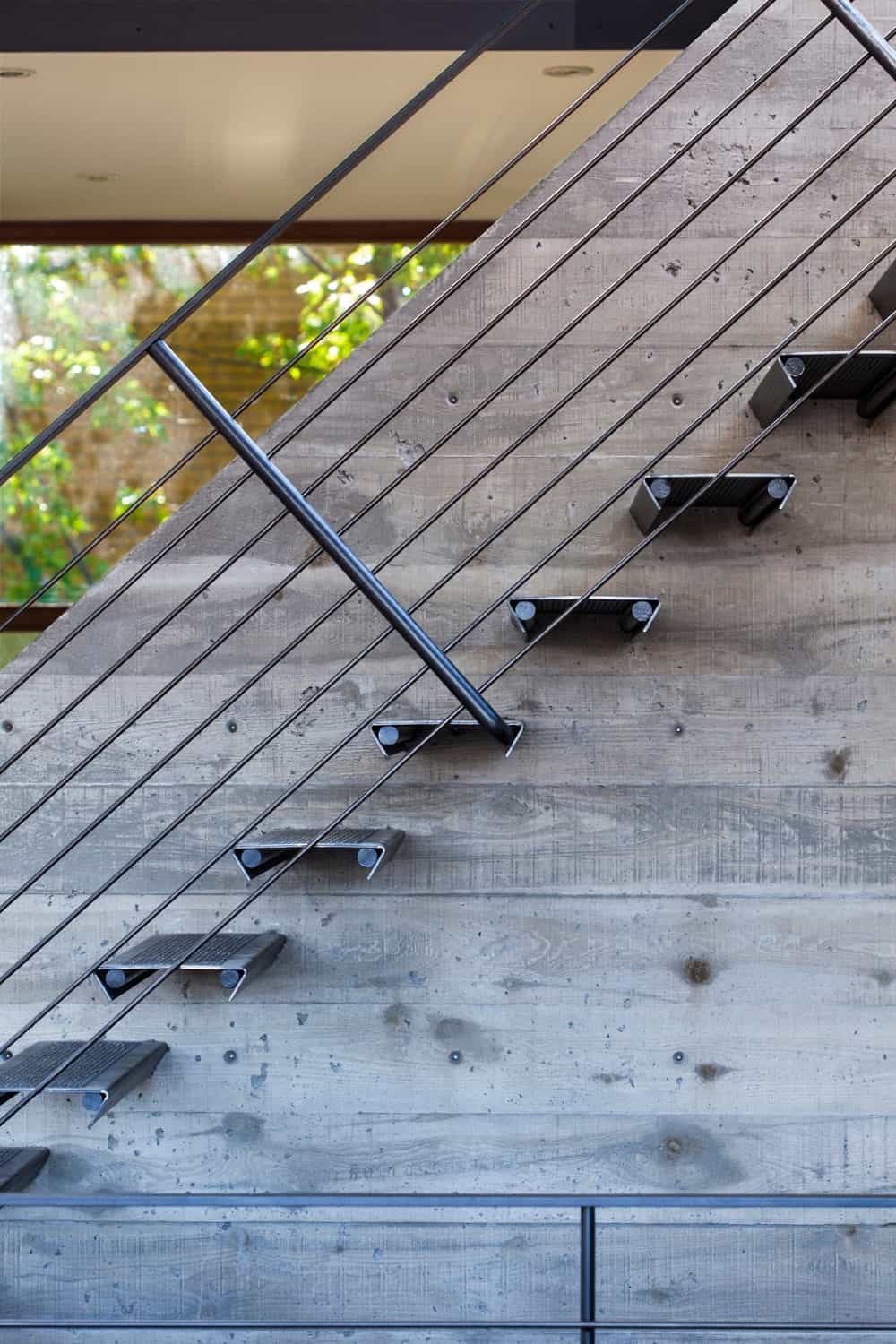 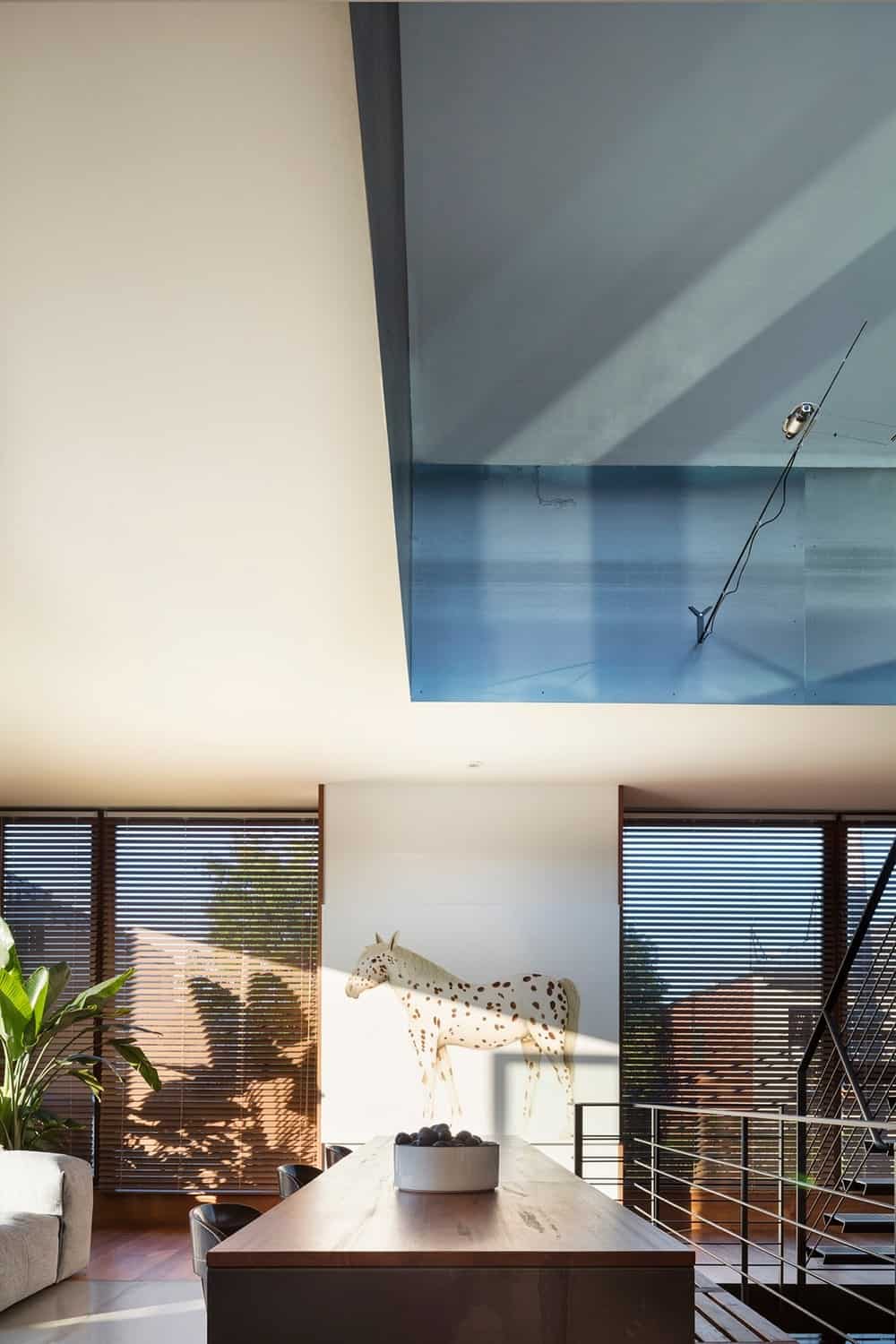 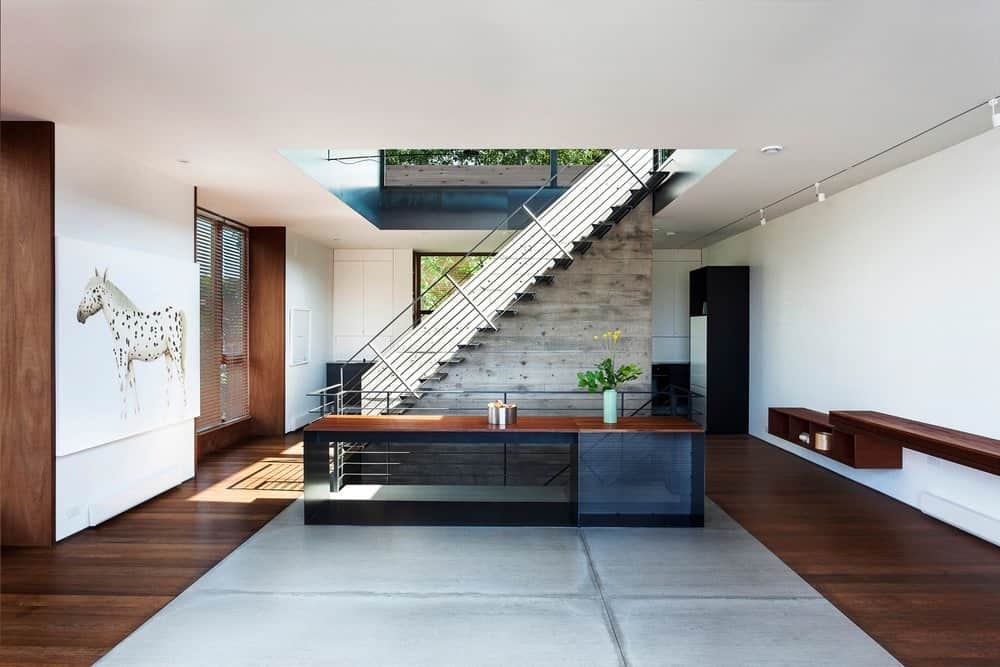 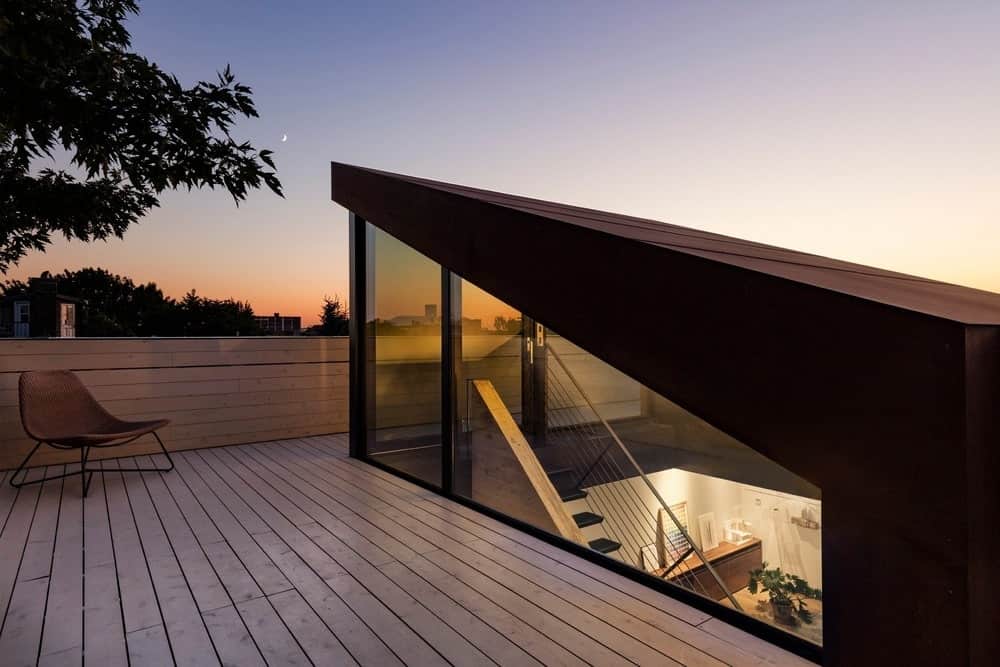 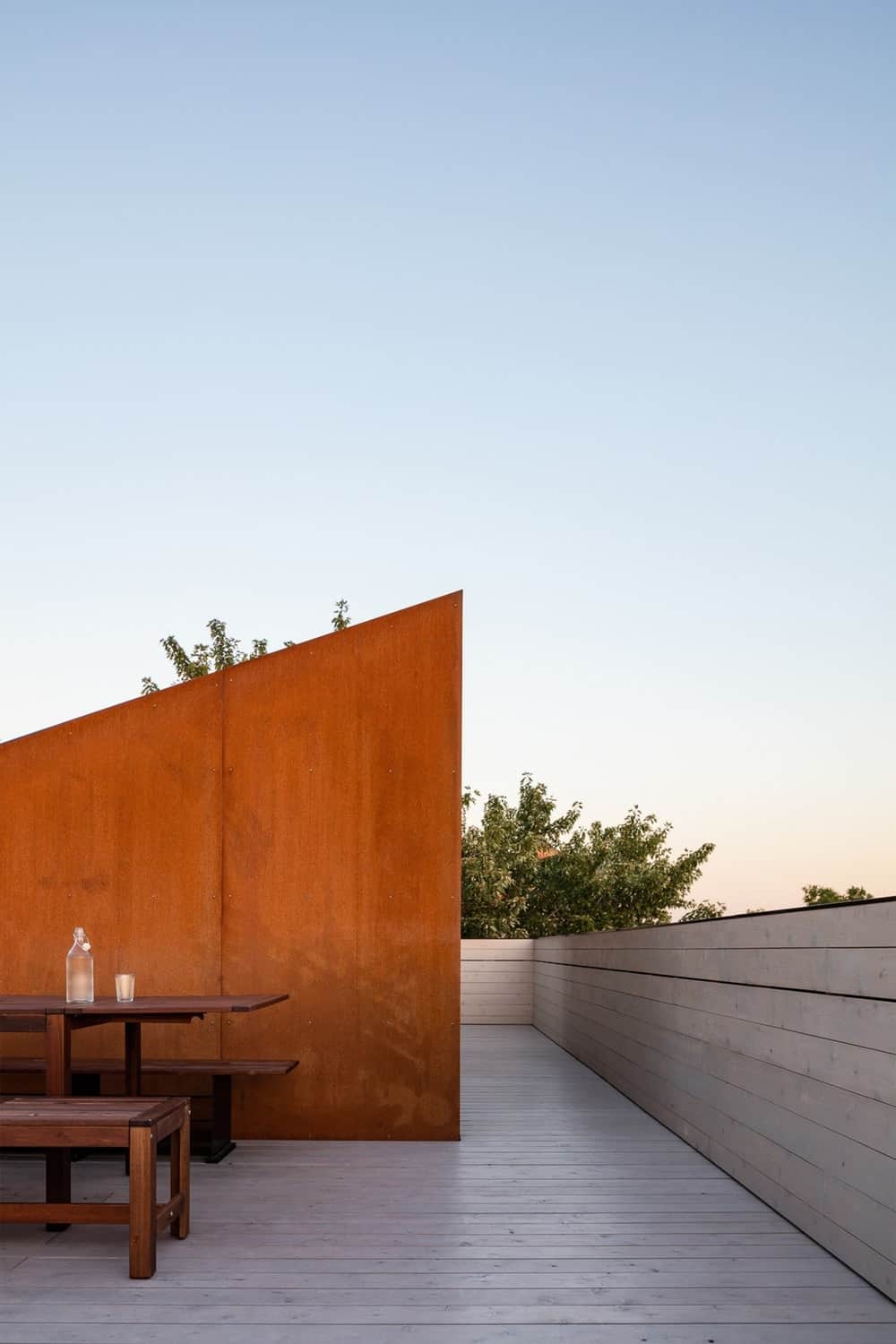 yh2 is a Montreal architecture firm founded in 1994 by architects Marie-Claude Hamelin and Loukas Yiacouvakis. For yh2, architecture is the art of place-making. It is a creative and transformative tool, a way to reinvent reality.

All aspects of a project are carefully studied: integration within a given context, conceptual design, working drawings, architectural details, interior design, and object design. Concepts are developed in such a way that each of the elements must play a part in the overall composition. Nothing is superfluous.

yh2 deliberately chose to concentrate on fewer projects. Headed by its two founding partners, the team dedicates its full attention to these projects, which have received numerous awards throughout the years.