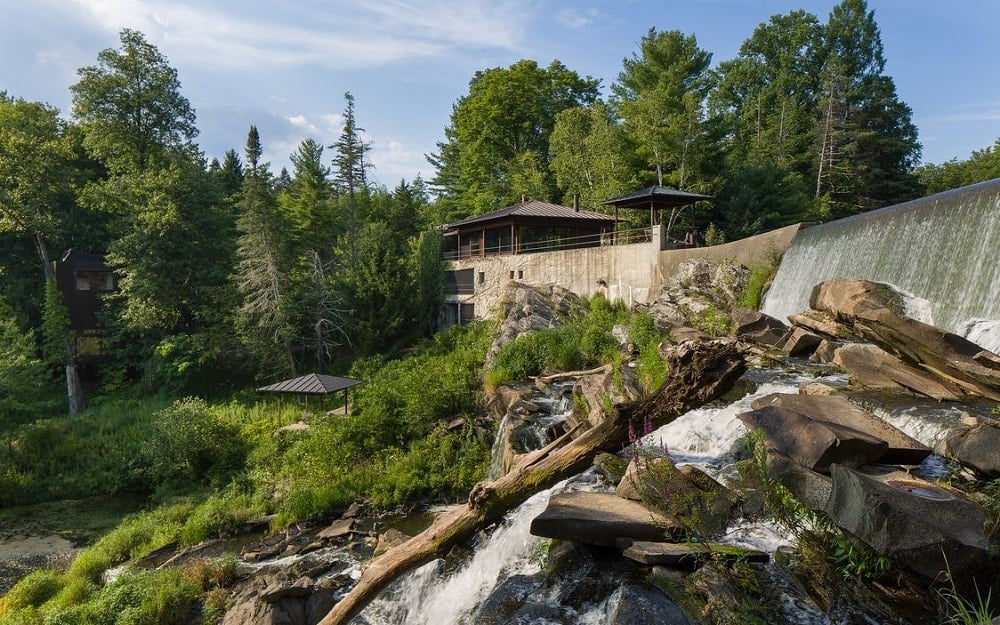 There is a 60-foot waterfall on the Landsman Kill River with a contemporary New York home on its side, suspended over the river’s cascading water and sharp rocks. This contemporary home is now on the market priced at $8.995 million.

The house is measured at 6,500 square feet with six bedrooms, seven bathrooms, ceiling-to-floor walls of glass, copper-roofed pavilions, an open-plan kitchen, dining room, living room with sliding doors, a primary suite, home theater, overhangs, extensive use of wood and built-ins. The property also features a two-story artist’s studio, a two-bedroom guest house and a picturesque suspension bridge over the river.

This contemporary glasshouse at the side of a waterfall is listed by Houlihan Lawrence of Sotheby’s International Real Estate.

This New York home perched next to a 60-foot waterfall on the Landsman Kill River that was recently featured in Architectural Digest is now for sale at $8.995 million. Similar to Frank Lloyd Wright’s Fallingwater, the contemporary home is suspended over the river’s cascading water and sharp rock formations framed by trees, sky and water. The home’s ceiling-to-floor walls of glass capture the crashing waterfall from the privacy of the home’s 26 wooded acres.

Just a short drive into the historical village of Rhinebeck, the home was built in 1985 and comprises four wood-framed, copper-roofed pavilions connected by a series of covered walkways. The main residence is at the water’s edge with an open-plan kitchen, dining room and living room with sliding doors that open to the falls and the river.

The main house includes a primary suite, two additional bedrooms, home theater and a number of other Wright similarities with flat and pagoda style roof lines, overhangs, extensive use of wood and built-ins. Also on the property are a two-story artist’s studio, a two-bedroom guest house and a picturesque suspension bridge over the river. Overall living space totals six bedrooms, seven baths within 6,500 square feet with stunning views in all seasons.