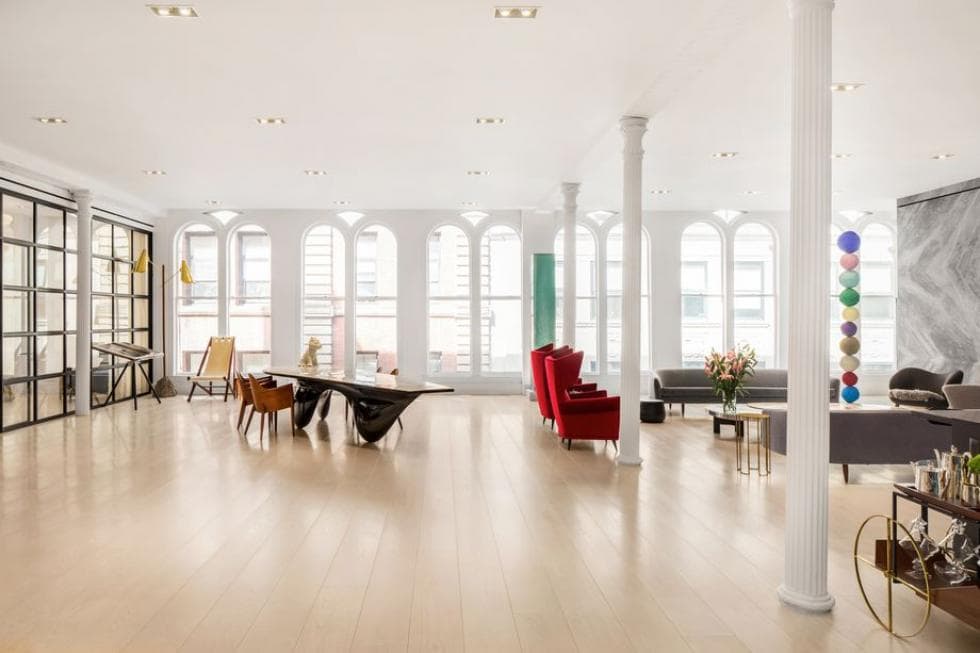 This loft in New York is considered as one of the largest lofts in Tribeca. This is now on the market priced at $15 million.

The loft is measured at 5,800 square feet with four bedrooms, five bathrooms, an exceptional art collection display, a wide-plank ash flooring, a large fireplace, and a totally new kitchen. The loft also includes a media room, a wet bar, cathedral windows, and a separate library.

The listing agents of this Tribeca, New York loft are John Gomes and Fredrik Eklund of Douglas Elliman. 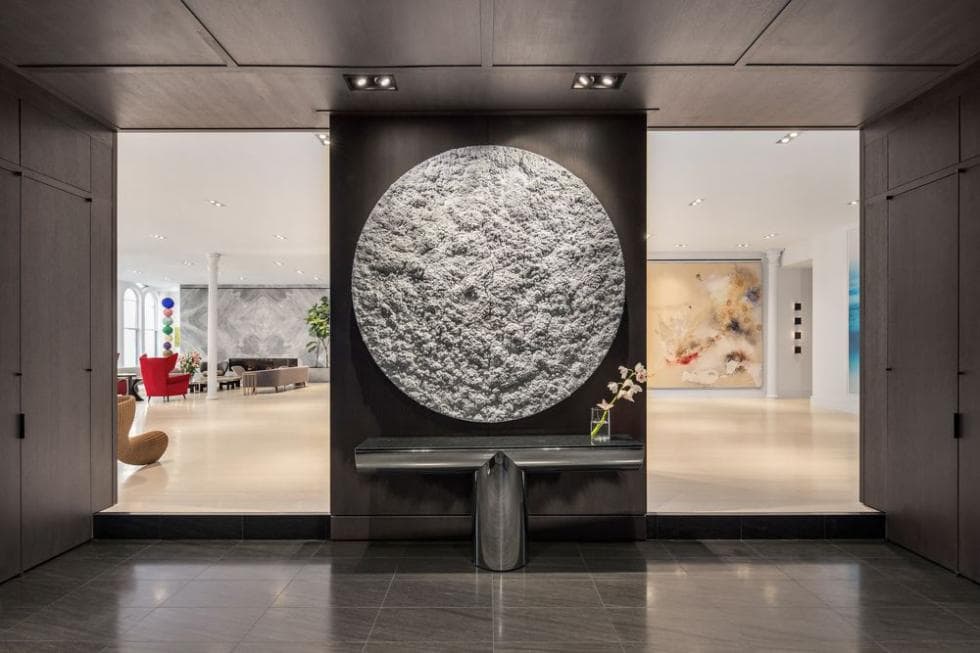 Upon entry of the loft, you are welcomed by this foyer that is adorned with a large stone disk artwork mounted above the console table. Image courtesy of Toptenrealestatedeals.com. 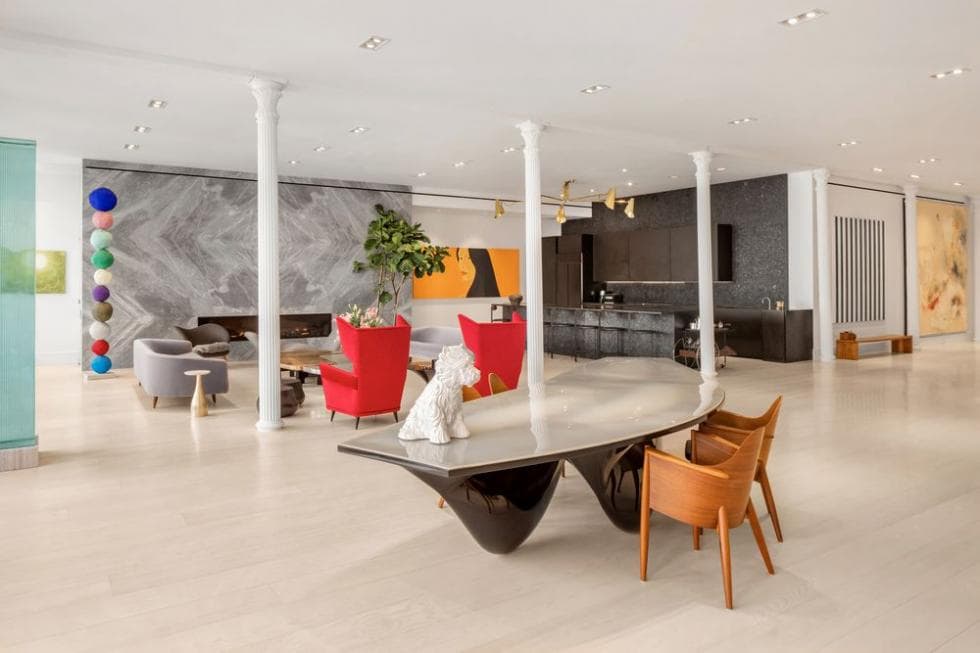 This is a look at the great room that houses the dining area with a modern table, living room with gray sofas and the kitchen with dark cabinets. Image courtesy of Toptenrealestatedeals.com. 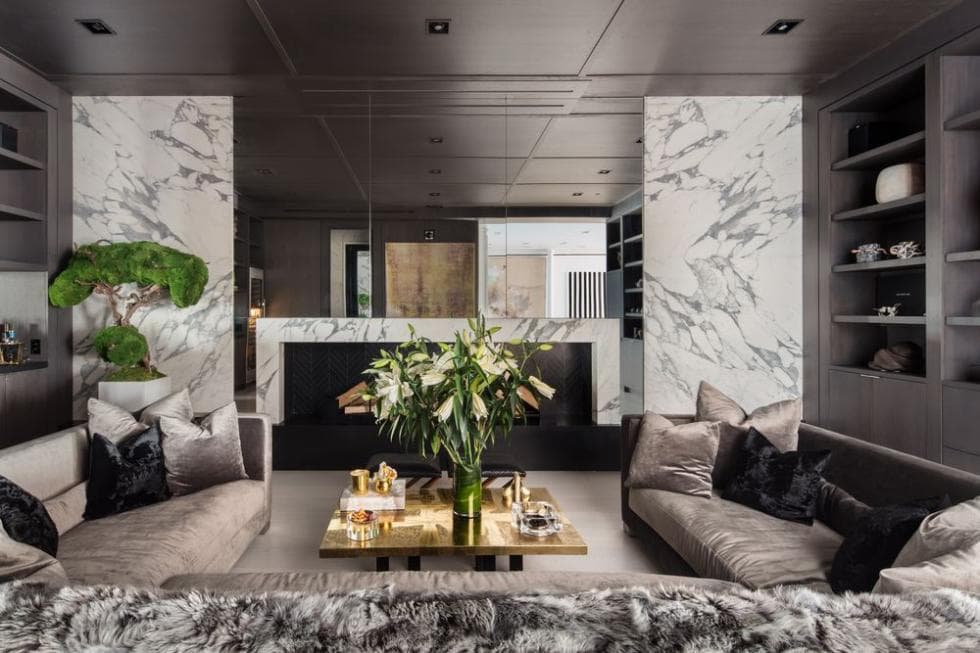 This is a closer look at the living room with white marble walls and gray sectional sofas paired with a coffee table. Image courtesy of Toptenrealestatedeals.com. 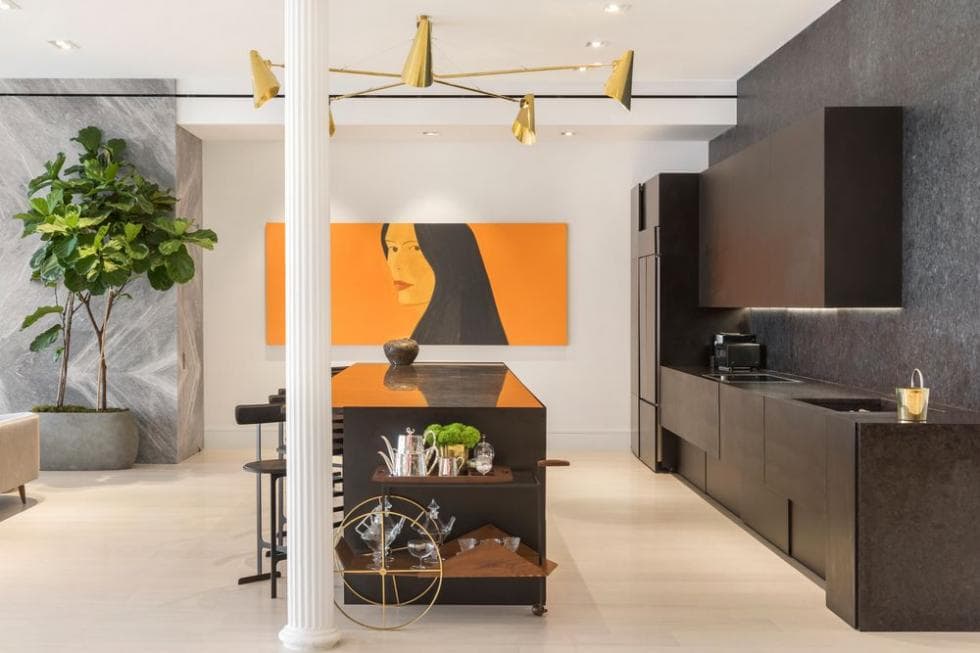 This is the kitchen that has a large dark brown kitchen island adorned with a painting on the far end and a chandelier on the other. Image courtesy of Toptenrealestatedeals.com. 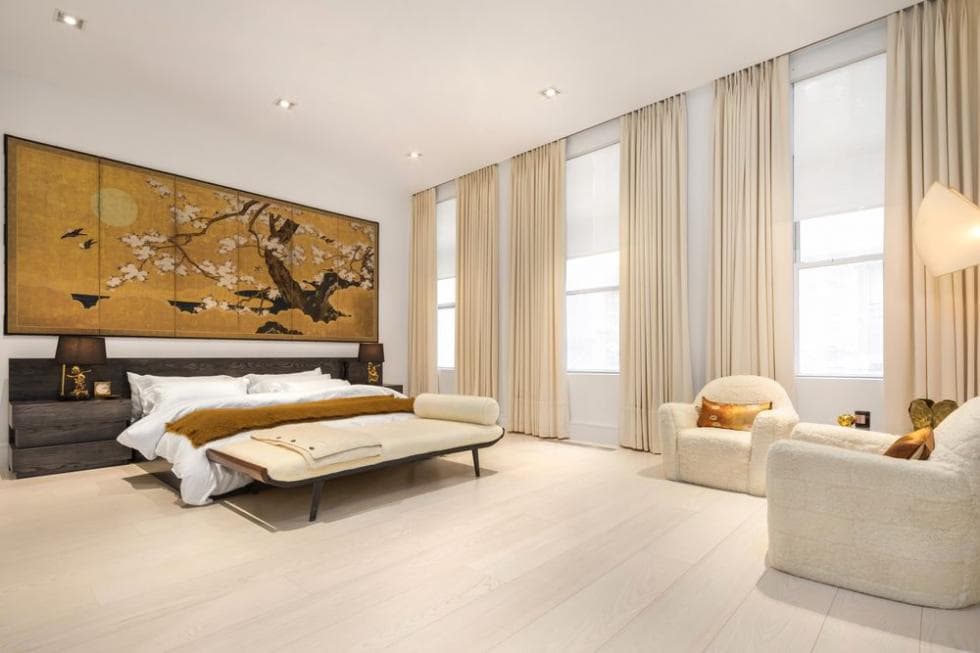 The bed is topped with a large oriental painting. These are then complemented by the row of windows on one side. Image courtesy of Toptenrealestatedeals.com.

The popularity of New York City lofts started back in the 1960s when artists, mostly of the hippy generation, needed large spaces to sling paint across massive canvases, creating the “art” of the day. Many factory buildings in SoHo, NoHo, NoLiTa, and Tribeca that had housed textile workers were deserted with the vast open spaces of their workshops.

They were filthy with dirt and dust, but they had the space these artists needed so they illegally “squatted” there and spread out the tools of their trade. When coffee shops and galleries took note and opened to serve the new artist population, factory owners paid attention, observed the increase in their property values, and started sprucing up and restoring their buildings. The city followed their lead and rezoned residential. The evolution in the popularity of loft living now draws the most affluent young trend and fashion-conscious real estate buyers.

Now for sale is one of the largest lofts in Tribeca. It last changed hands in 2014 at over $6 million and has since undergone multi-millions in renovations by a couple with an exceptional art collection. To do the work, they hired HGTV’s Stephen Fanuka, who transformed the loft into an architectural work of art. At 5,800 square feet of mostly open space, the options are many.

Now with wide-plank ash flooring, a large fireplace with an eye-catching surround of book-matched marble that extends to the ceiling and a totally new kitchen also included is a media room with a 100-inch projection screen and wet bar and a separate library. The four-bedroom, five-bath loft includes a 75-foot span of cathedral windows ensuring a bright and cheerful environment to display an art collection. The listing agents are John Gomes and Fredrik Eklund of Douglas Elliman.

One of the largest lofts in New York City designed by HGTV’s Stephen Fanuka is now offered at $15 million.