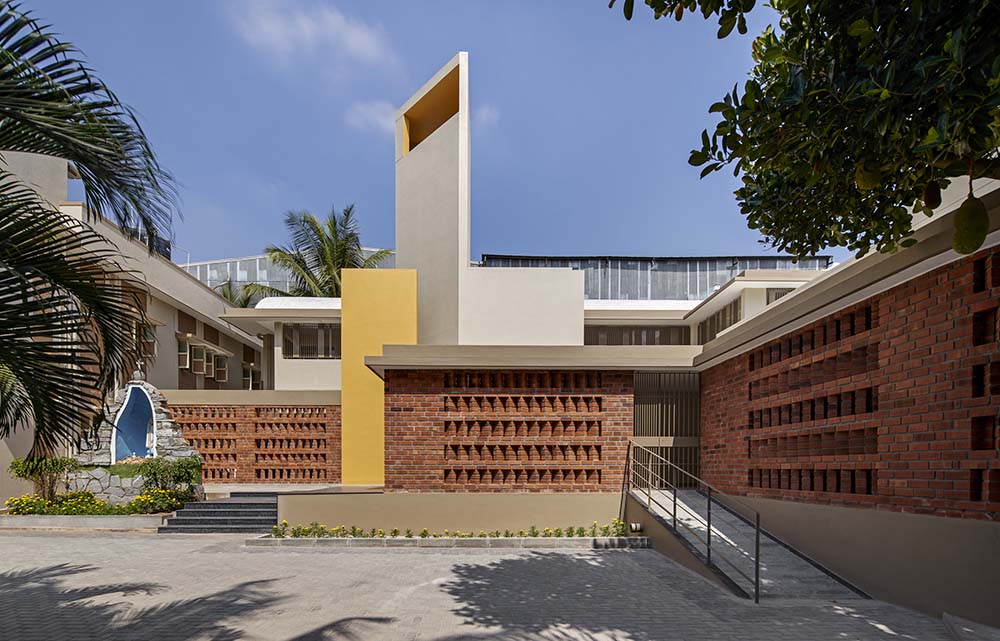 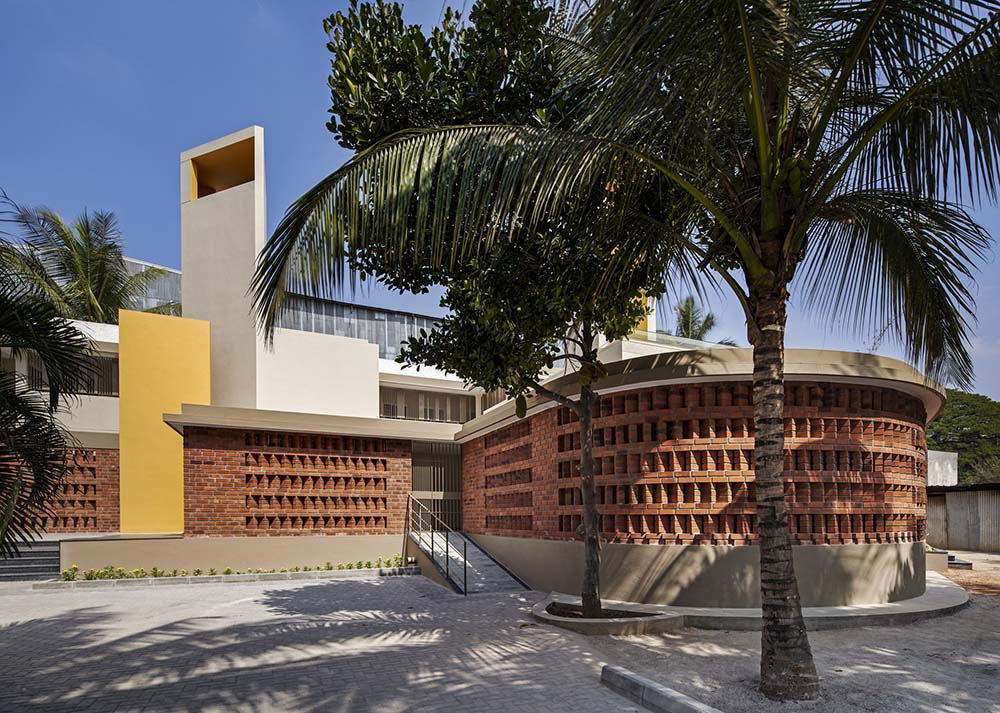 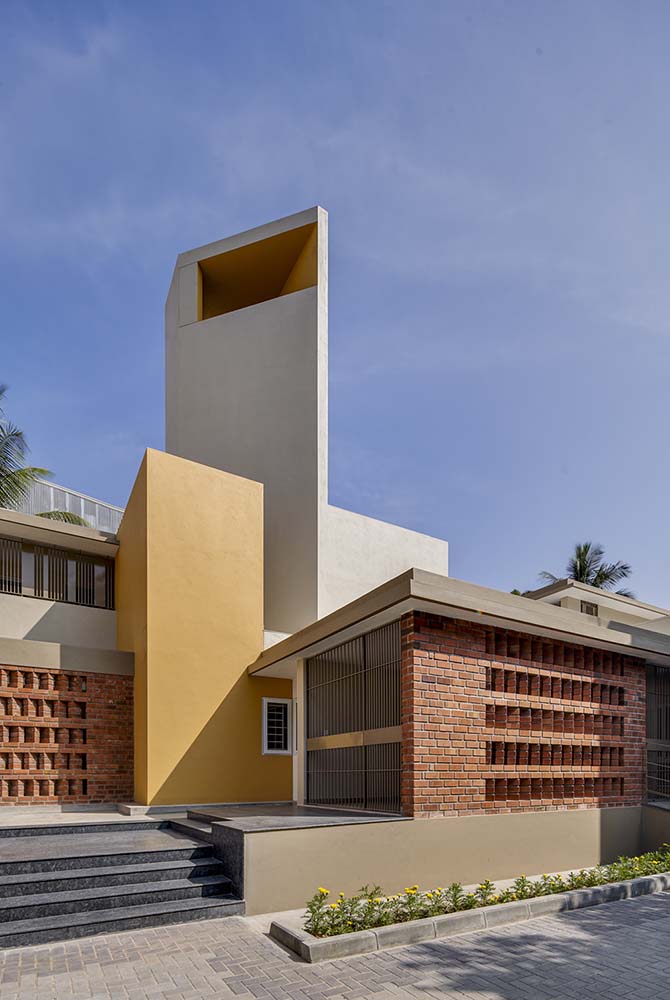 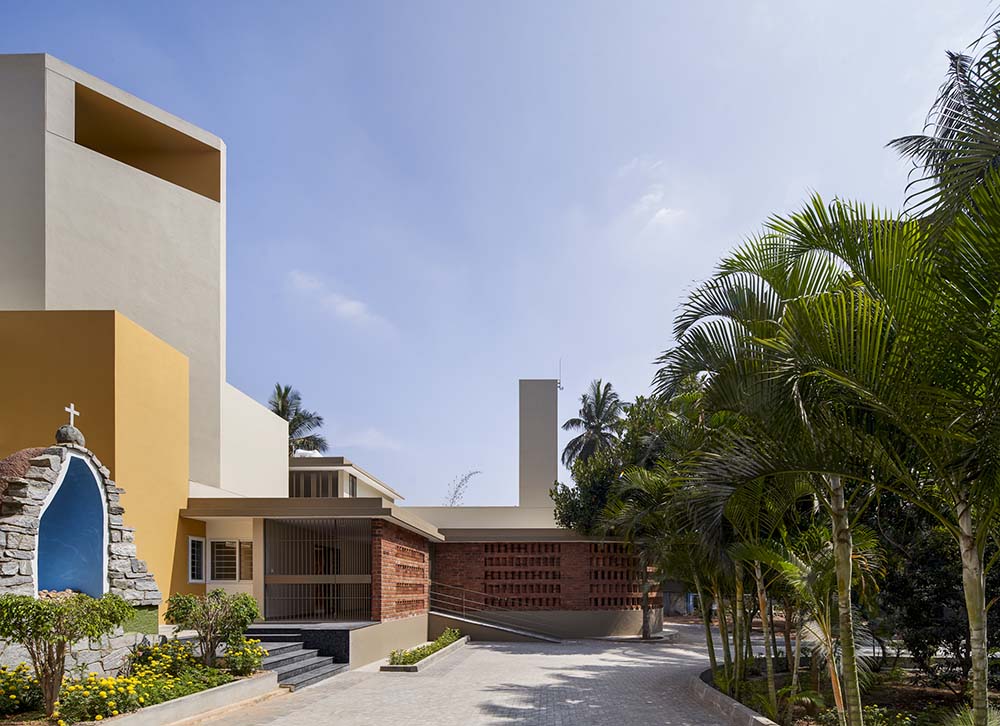 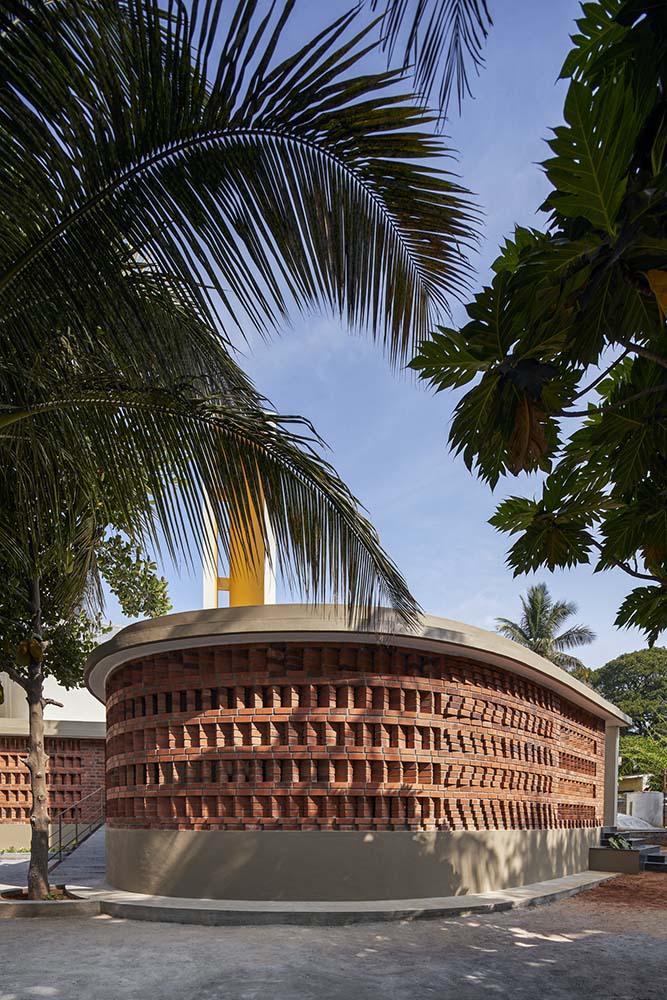 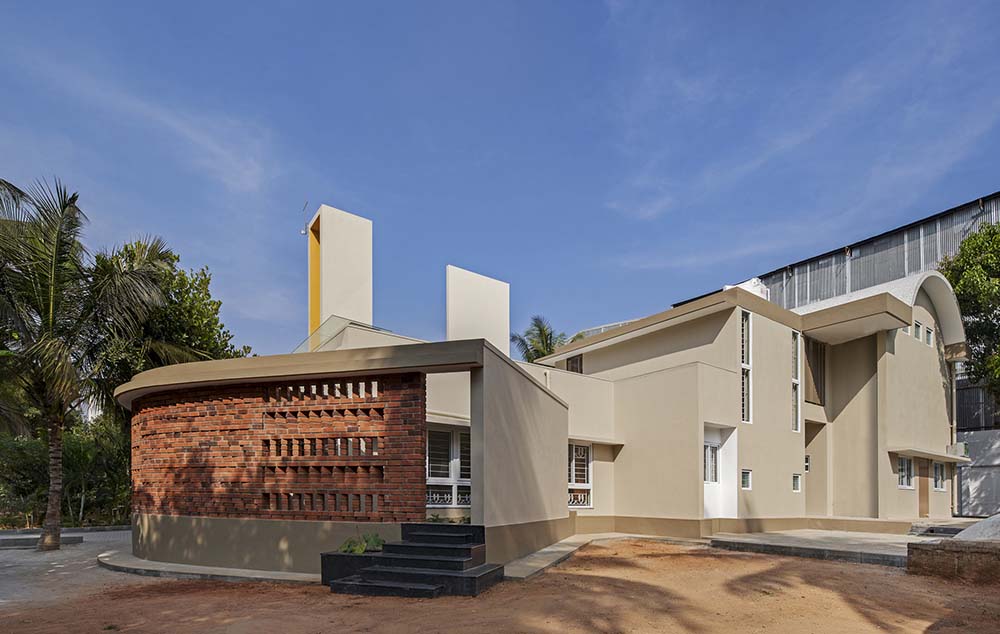 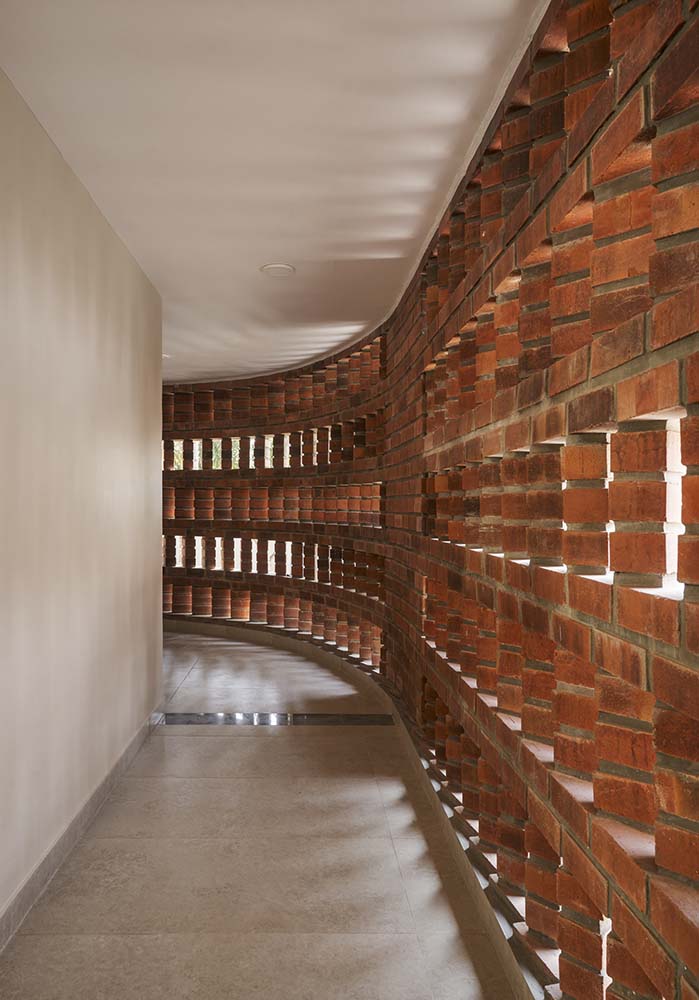 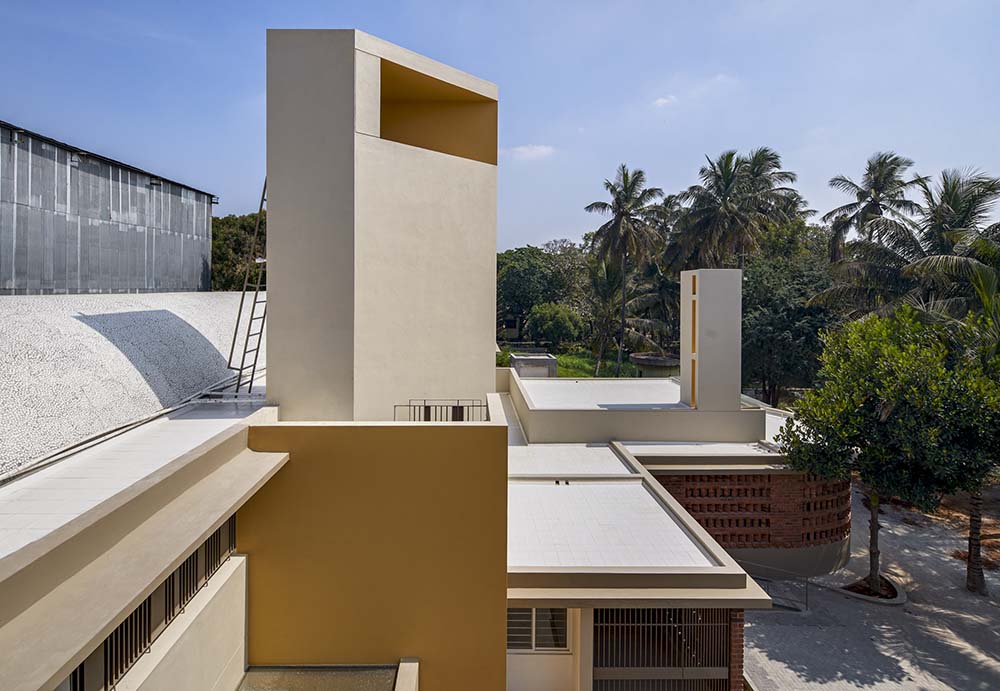 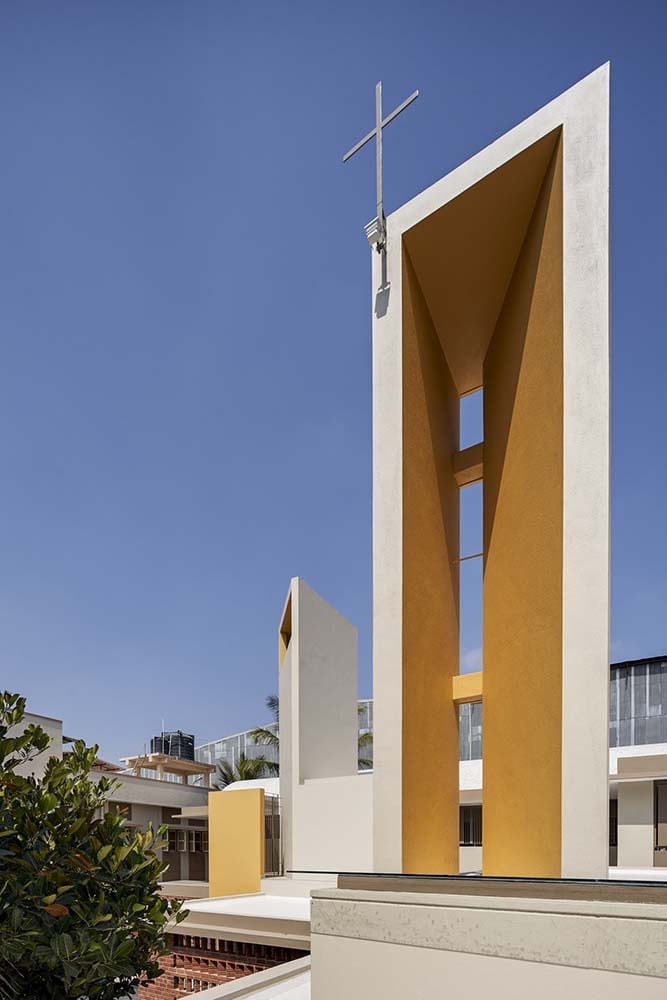 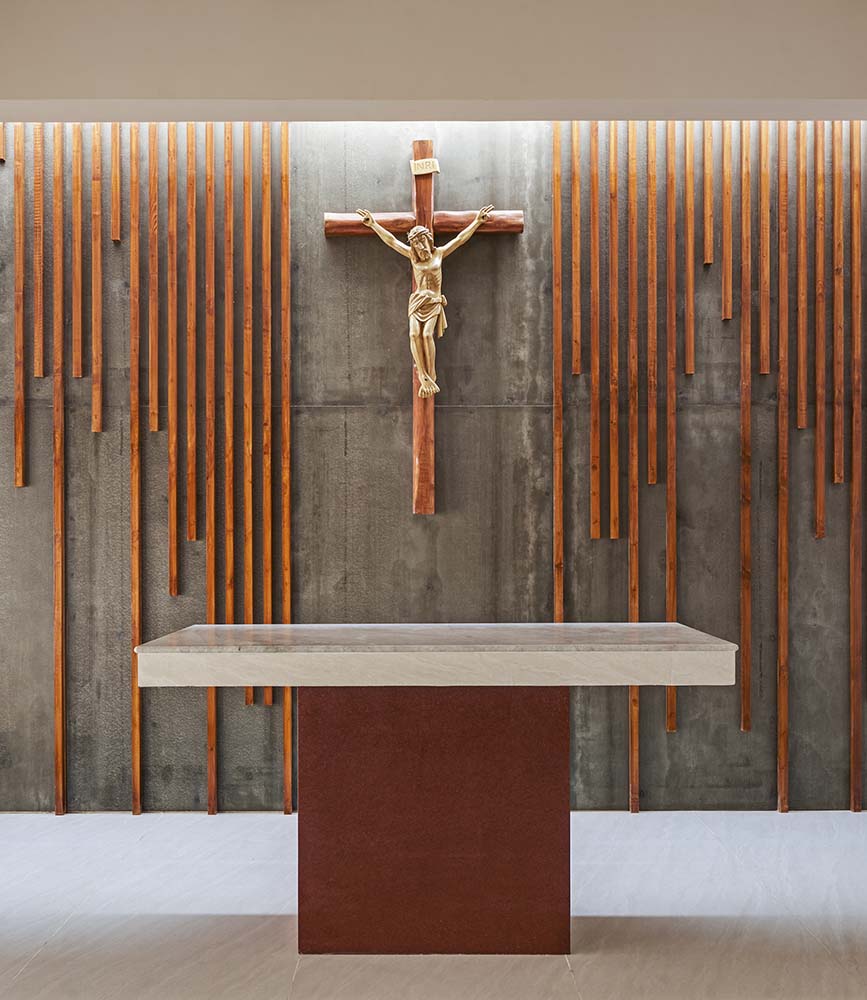 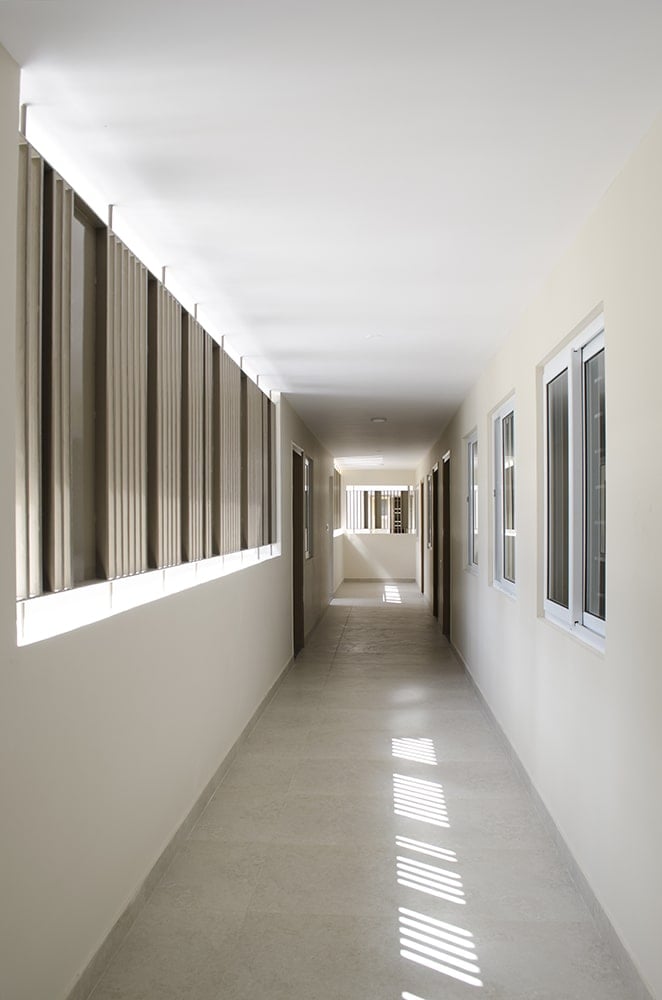 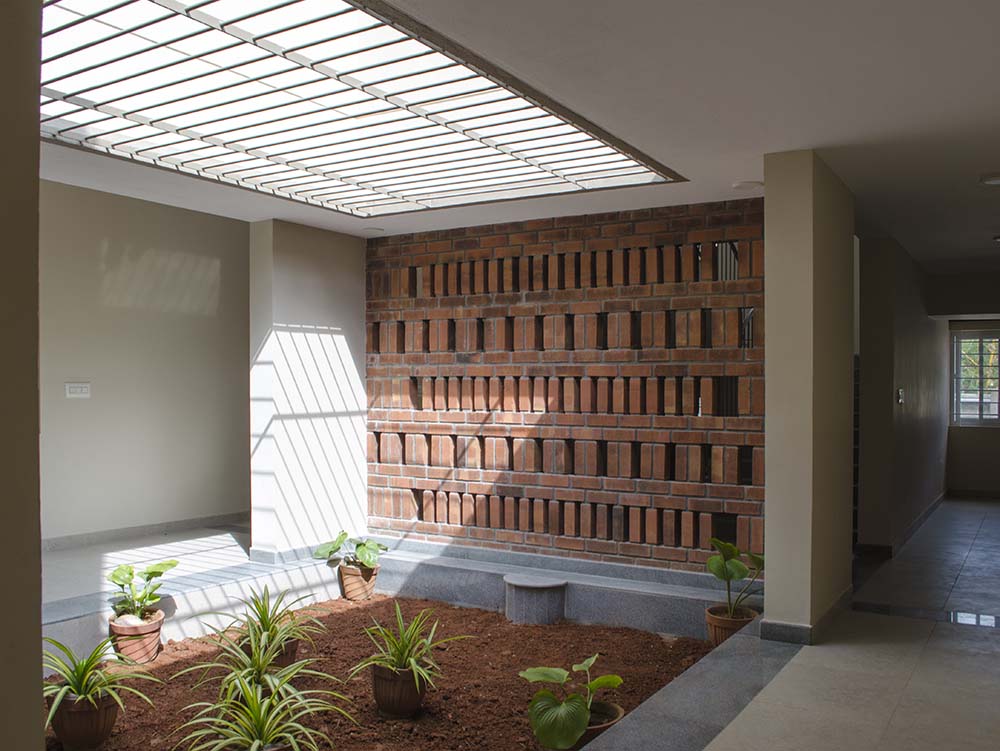 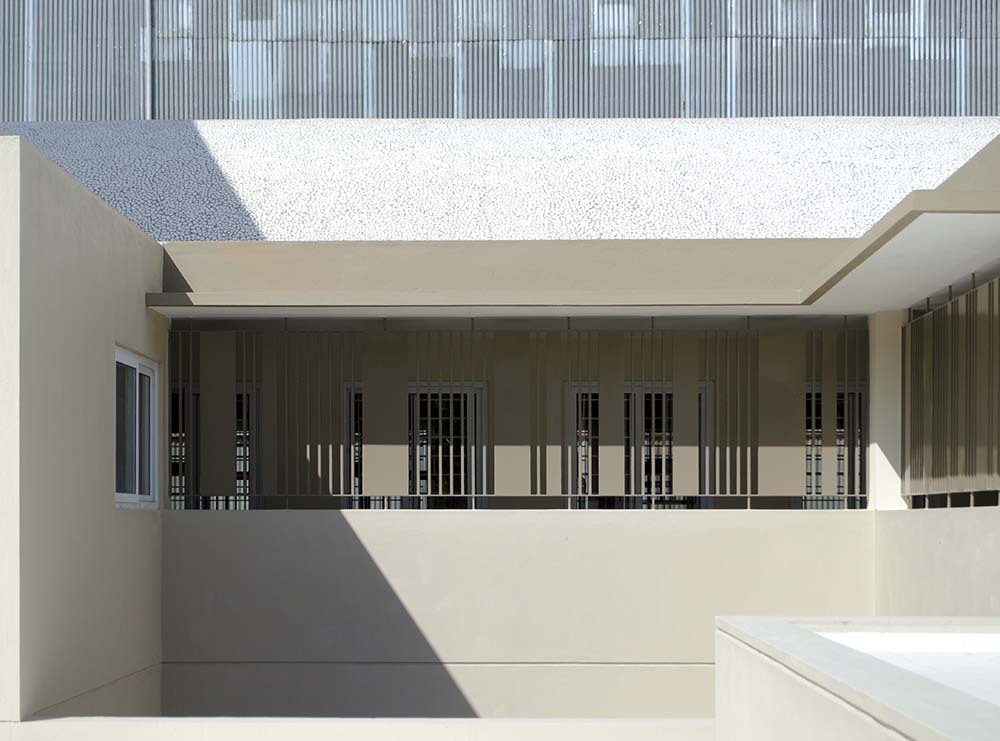 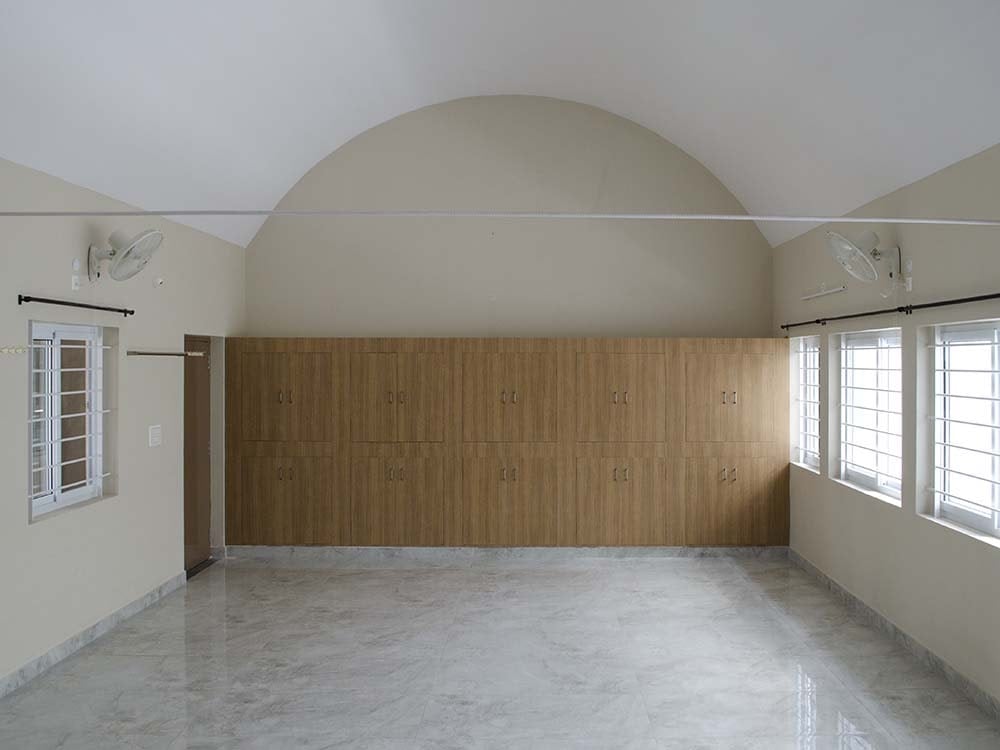 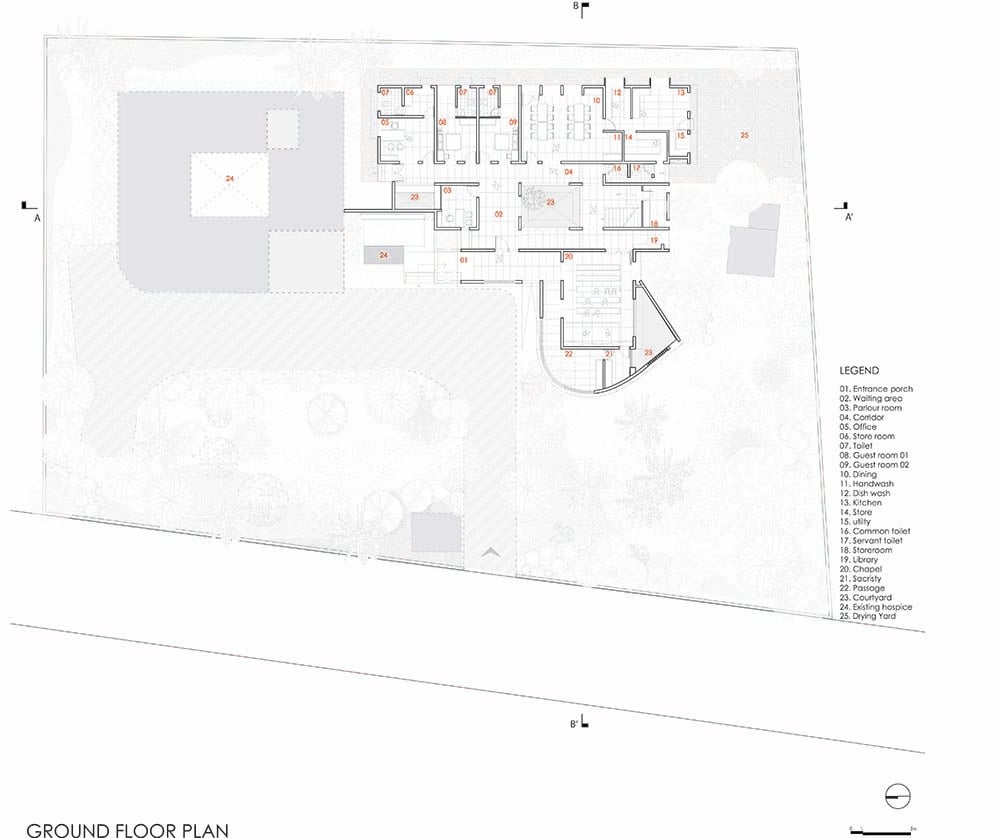 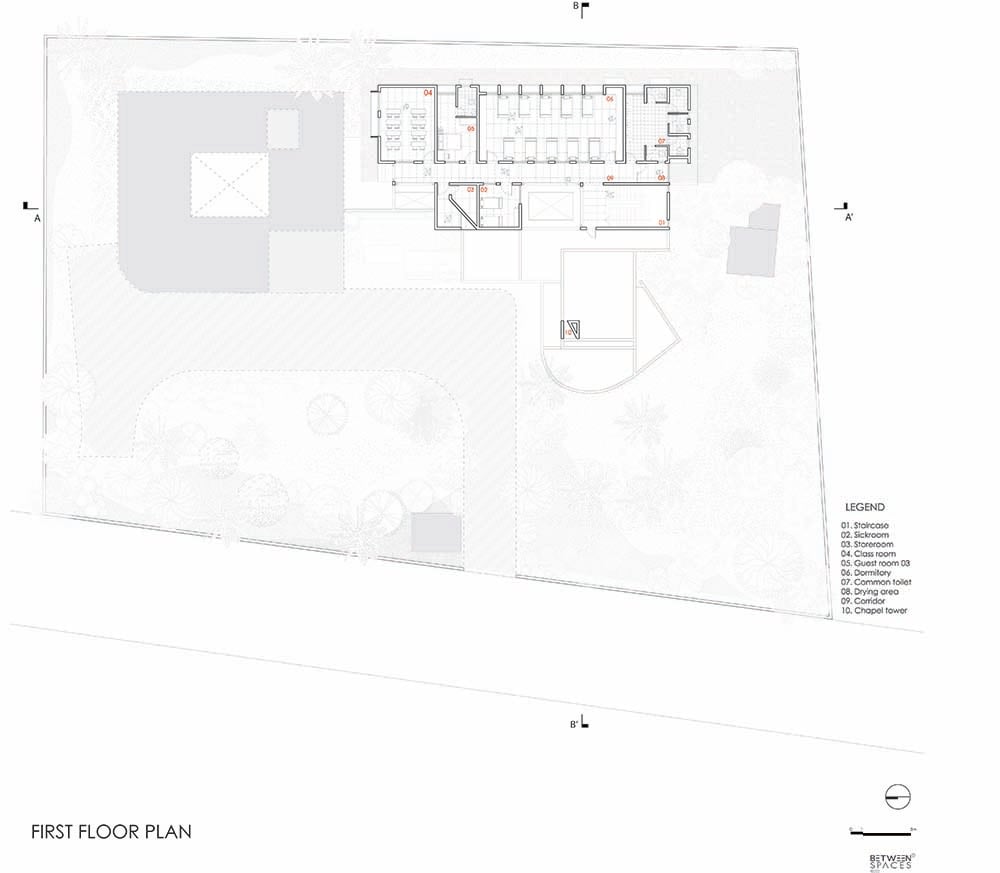 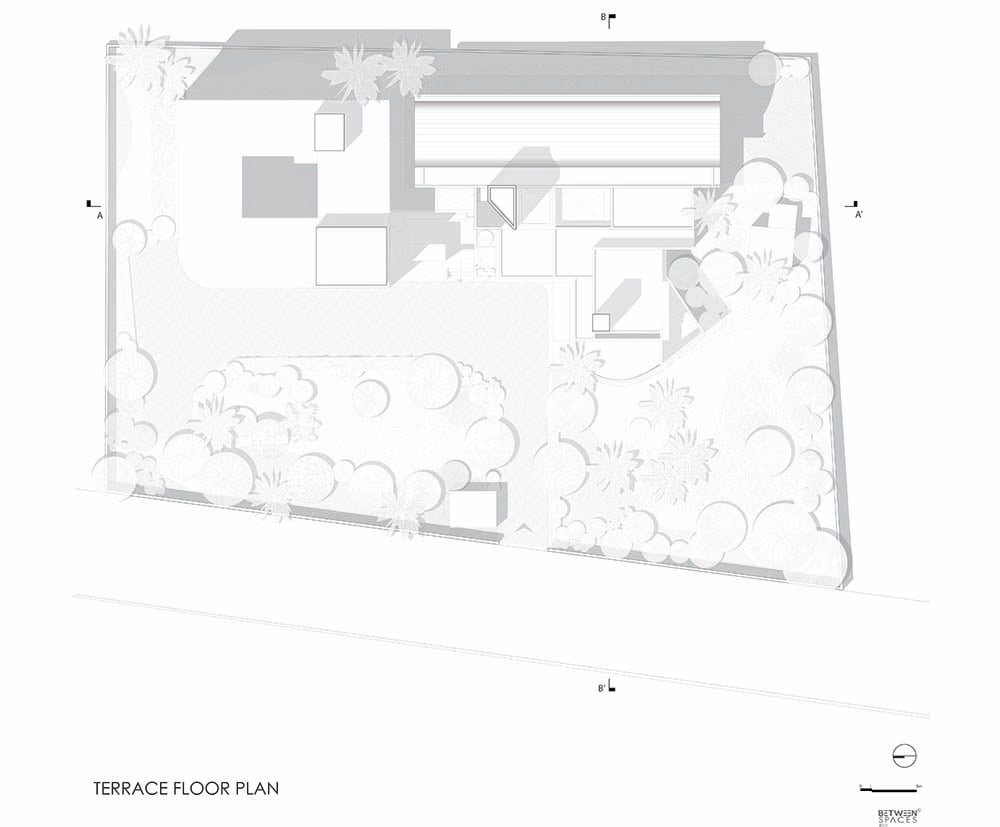 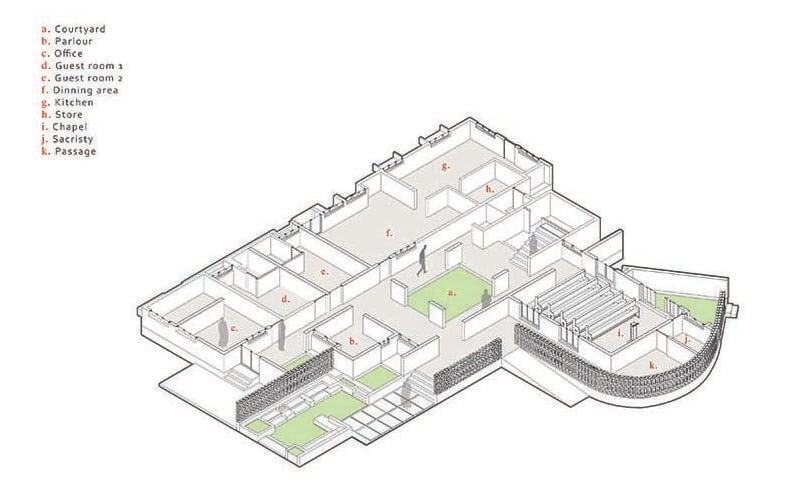 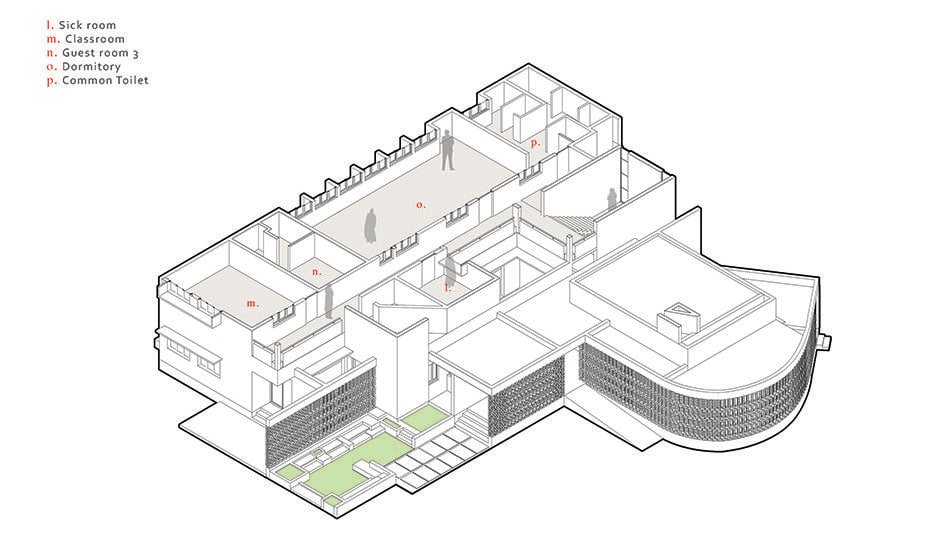 Nature begets Spirituality and so most religious centers are ensconced amidst nature. Shanti Sadan is a place for worship and service. The spatial planning of this facility, the materials used in construction, and the simple form that defines this building are all a reflection of the austere life of the nuns of this community.

The site had a two-storied structure, adjacent to an existing hospice, which had become weak due to disrepair and age and couldn’t accommodate the current and future needs of the congregation. Hence the Sisters of St. Ann, Luzern in Mysore invited us to design a new facility that could accommodate a few bedrooms, a dormitory, a classroom, a dining, and kitchen facility, an office, and a chapel.

Programmatically, the building has two important parts– the accommodation facility and the Chapel. The dormitory, the bedrooms, a classroom, an office, the dining, and the kitchen are all clubbed together in a linear arrangement over two floors, whereas the chapel has been detached from the main block and pulled out into the greenery around. Metaphorically, this arrangement helped us in detaching ourselves from worldly affairs while in the place of worship.

The overall aesthetics of the building drew its inspiration from Buddhist caves at Ajanta with vaulted ceilings, the apsidal planning of Durga temple at Aihole, Buddhist caves at Ajanta, and the typical Byzantine, Romanesque, and Gothic Church plan. The two-storied linear mass on the northern side has an RCC vault roof finished in China mosaic to reflect the summer heat.

This not only creates a more heightened spatial experience akin to the ones we get in all religious buildings but also keeps the interior cool by pushing the ceiling higher and accommodates the bunker beds in the dormitory.

Spatially, the double storied linear mass in the rear is connected to the single-story programs in the foreground through two small courtyards. These courtyards bring in the pause points in this small building and allow good cross ventilation.

The linearity of the vaulted roof is punctuated by the verticality of two towers – a small one over the Chapel, more symbolic in nature, and another in front of the vaulted roof which in fact is an overhead water tank. The second tower was deliberately given a certain mass to give it a sign of a typical church spire.

The entire southern façade has an apron of intricate lacing of bricks. The brick screen shields the habitable spaces from the southern sun and gives a very sublime visual experience on arrival. The brick screen wraps around the chapel defining the passage leading to the sacristy which would enable the priests to get ready before entering the chapel. The entire construction is load-bearing, which helped in a significant saving on the cost of concrete and steel.

Our approach to this project was to understand the semiotics associated with religious architecture and separate it from the pervasive image of what architectural forms and shapes define a specific religion.