Danny Thomas is but a sweet memory. However, the Thomas mansion is up for sale for $135MM. Erected by Thomas in 1970, the splendid 11,880-square-foot home sits on a promontory with a grand view of LA, the mountains, and the ocean...Trousdale Estates, Beverly Hills...gold detailing, hand-painted ceiling, Baccarat crystal chandeliers... 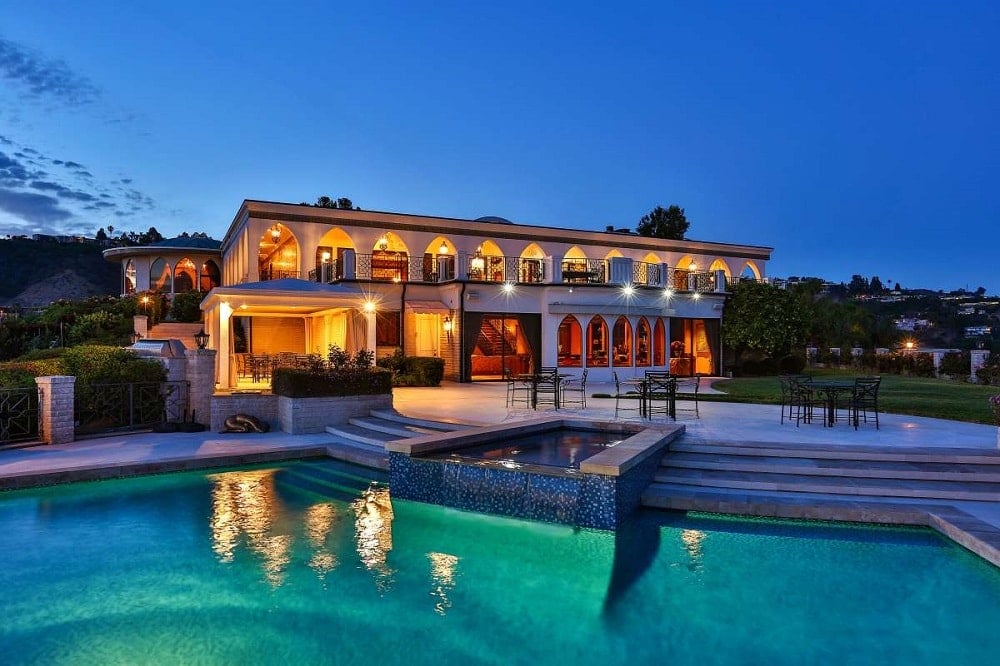 Best-known as an actor, Danny Thomas was so much more than just that and the nightclub comedian he played as Danny Williams on the TV sitcom Make Room for Daddy. Later the show also became known as The Danny Thomas Show. It was on first-run broadcast syndication for 13 years. In the June 20, 2004 issue of TV Guide, he was ranked #5 in their list of the “50 Greatest TV Dads of All Time.”

His career began in 1932 when Detroit heard him perform on WMBC radio, a show called The Happy Hour Club. Later he performed on The Big Show alongside the legendary Tallulah Bankhead. Of course, there was his own radio show, The Danny Thomas Show, which ran on ABC from ’42-‘43, then, on CBS from ’47-’48.

Thomas also did some film works, like the 1951 film biography I’ll See You in My Dreams co-starring with Doris Day, and the 1952 remake of The Jazz Singer co-starring with a vocalist, Peggy Lee.

Thomas eventually became a successful producer, as well, co-producing TV shows like The Mod Squad and The Andy Griffith Show with Aaron Spelling and Sheldon Leonard. He also produced The Real McCoys for Walter Brennan. In 1990, Danny Thomas was inducted into the Television Hall of Fame.

In 1962, in Memphis, Tennessee, St Jude’s Children’s Research Hospital was built by Thomas to honor St Jude Thaddeus, the saint of hopeless causes. That hospital has now treated children from across the US and around the globe.

Danny Thomas is but a sweet memory. However, the Thomas mansion is up for sale for $135MM.

Erected by Thomas in 1970, the splendid 11,880-square-foot home sits on a promontory with a grand view of LA, the mountains, and the ocean. The panorama is breathtaking. This exquisite residence can be found on North Hillcrest Road in Beverly Hills, California, in Trousdale Estates, an exclusive community.

The majestic mansion has 7 bedrooms and 10 bathrooms. That grand view wraps around the formal dining room, which shines on its own merit with gold detailing, hand-painted ceiling, and Baccarat crystal chandeliers. There are trompe l’oeil archways and splendid crown moldings in the large living room where you walk on hand-woven carpets.

Any of your elegant, formal functions can be held in the palatial ballroom. There is also a media room where you can enjoy an extra-large top-quality home theater with surround sound that rocks the room. Best of all, there are Miele and Viking appliances in the chef’s kitchen.

Outside, the 2.5 acres of the estate offers another 6,120 square feet of living space outside the home in the form of a large swimming pool with a waterfall spa, patio, dining and viewing pavilions, staff quarters, and a 20-car motor court.

Every detail of the Moorish-designed home is included in the sale. You must see the home to understand how unbelievably grand it is. It is a masterpiece.

Thomas was healthy and active until death.