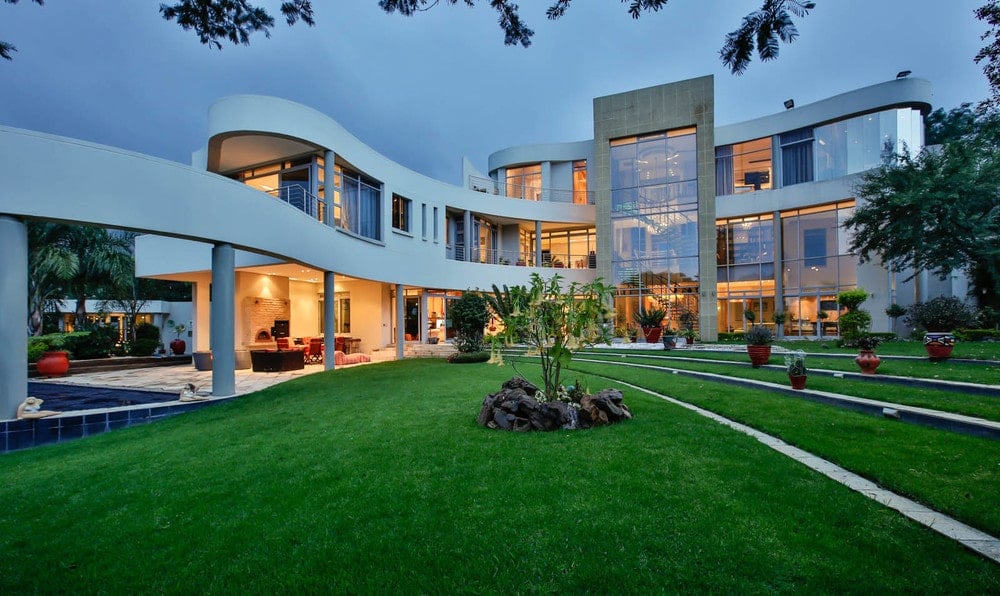 There is a house in Johannesburg, South Africa with a stunning contemporary design that is perfect for the executive who loves to entertain. This house is now on the market priced at $1.275 million.

The house has four bedroom suites, six bathrooms, five living areas, a heated pool, and gardens. It has walls of glass, a newly redecorated kitchen with granite countertops and appliances, and a separate bar and wine room. The grounds include staff quarters, a separate studio, and a four-car garage.

As more Americans seek retirement havens overseas and as entrepreneurs investigate which country they would like to live and start up their new company, eyes turn toward Johannesburg, South Africa. A city that evolved from South Africa’s gold rush, Johannesburg is largely cosmopolitan and English speaking and is the source of a large scale gold and diamond trade due to its mineral-rich Witwatersrand hills.

Already ranked as a top worldwide center of commerce, it is predicted to become one of the largest urban areas in the world. Served by O.R. Tambo International Airport, the largest in South Africa, it is a gateway for international air travel. It has the largest man-made forest in the world and greenery providing large parks and suburban tree-lined streets.

Close to game reserves, safaris, and wine country, South Africans are very social and could be attending public lectures on particle physics one day with a dinner party that night or musical events ranging from classic to underground. There are a plethora of shopping malls and farmers markets to browse and shop or visit one of many area restaurants – much serving outdoors in the year-round comfortable climate.

It may also be the only place in the world where one can actually play with lion cubs in Lion Park. Sports consist of soccer, cricket, and rugby with running also being a major sport. British and American expats have their own social circuits, and for entrepreneurs, the business climate is entrepreneurial and invigorating.

Currently for sale is a stunning contemporary home perfect for the executive who loves to entertain. The curvilinear design contains four bedroom suites, a total of six baths, and five living areas that spill out to the heated pool and gardens. Walls of glass capture the views and the curving glass stairwell to the second floor is a unique focal point. The newly redecorated kitchen is large enough to enjoy the company of friends and family with the latest granite countertops and appliances.

A separate bar and wine room add to the ambiance for entertaining. Included are staff quarters, a separate studio, and a four-car garage. Domestic help and gardeners, many full-time, are de rigueur for many Westerners living in South Africa. For more information.