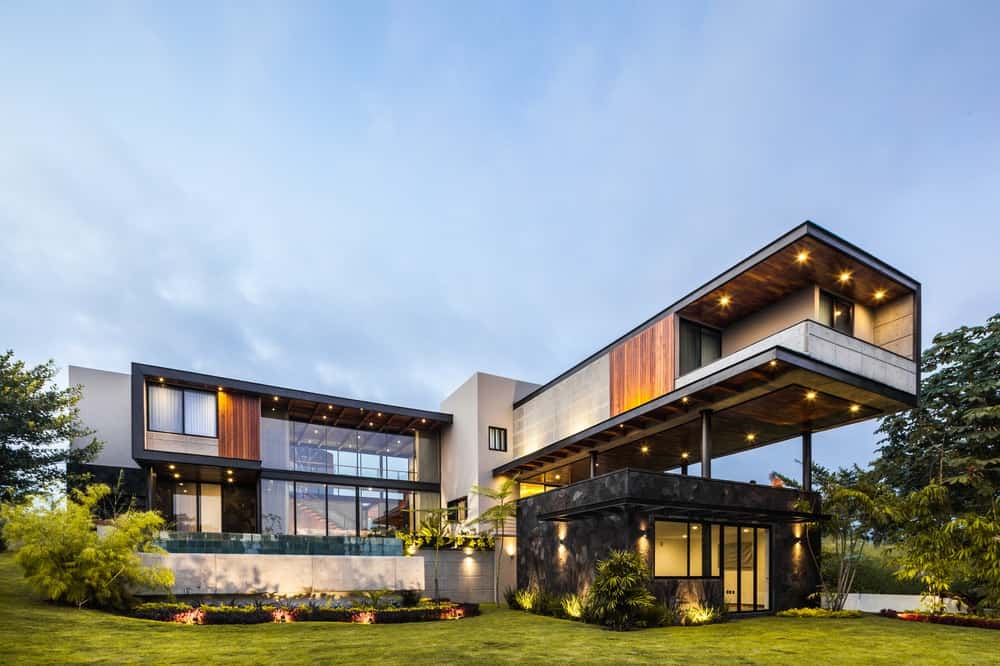 Facing nature and framed by a vast vegetation of primaveras, parotas and papelillos, a terrain with two clearly marked axes that open in a trapezoid-shaped way, is displayed. With 12 meters on the front and an opening for up to 50 meters in the back, the proposal should solve the complexity of the lot, which arises the concept that projected Casa Kaleth.

The design exposes a discreet front facade. In it, the variety of proposed and perfectly combined textures start to show up. A concrete “L” is placed and opposed over a permeable wood and crystal entrance, followed by a solid stone volume. The designed language in the back facade was directed to the contrary, where the answer was an invasion that collided with imposing and geometric bodies, which channel the user’s view to the landscape, creating a “telescope” effect in the phenomenology that is experienced when touring the house.

Reinterpreting the existing topography of the site, the project plays with levels and with an evident horizontality in its volumes, which generates a long perspective and allows the opening of most of the spaces, letting the wind and the views pass by to advocate what happens outside.

The material selection, was determined to choose components that were extracted from the surroundings, and became a poetic gesture when incorporating stone from Colima Volcano, which ends the panoramic view of the house.

Homogeneity achieved under the composition of natural elements such as stone or the parota wood, and their combination with others of industrial affinity, such as steel and concrete, provoked a balance and a perfect order that gave richness to the aesthetics of the house.

This way structural solutions, not only fulfilled the design’s function, but also made possible the exceptional cantilever which extrudes from the volumes on the back facade. Thereby, the assembly of steel columns and beams with concrete where key on the project’s configuration.

The architectonic program is distributed in 3 floor plans: the lowest level shelters the bar and T.V room; completely social spaces that are favorably related to the house’s garden.

One level above; the pool, terrace, living room and kitchen, share unique landscape views and a transformable atmosphere, that allows you to enjoy the intimacy or company of more guests.

At last, a much private area is provided on the upper level, that wraps the bedrooms in a secluded environment, and that does not set aside the preeminence for enjoying the horizon.