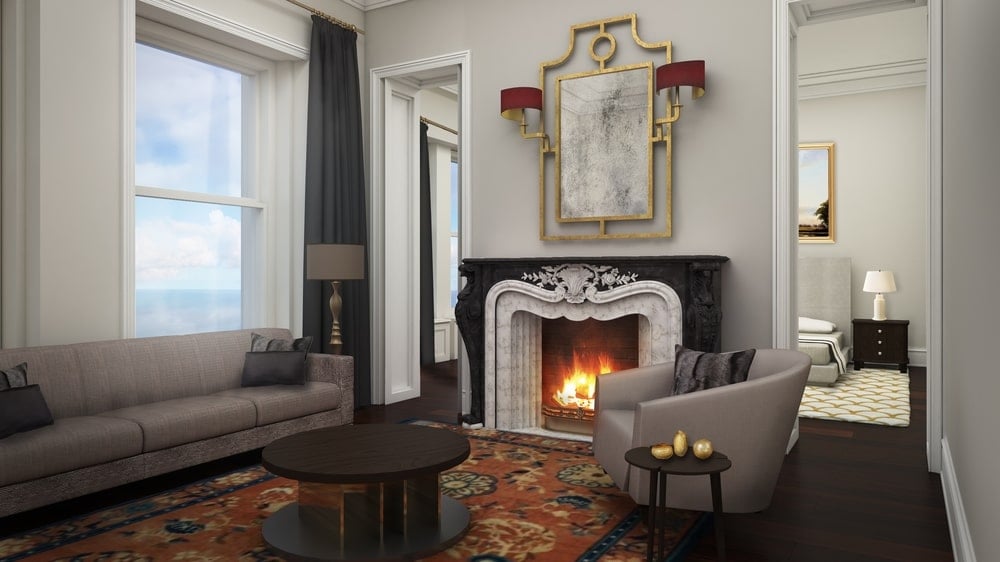 Actor Vince Vaughn has listed his three story penthouse in the charming, art-deco Palmolive Building for $13.9 million. The penthouse features game and billiards rooms, media room and a well-appointed kitchen with top of the line appliances. The highlight of this property is the amazing Lake Michigan views.

Chicago is a city with a lot of history. It has a plethora of well known, historic buildings such as the Willis Tower (formerly Sears Tower), Water Tower Place, The Chicago Theater, and the art deco Colgate Palmolive building, which had infamously been the Playboy Building.

The Palmolive building was designated a landmark in 2003. Popular actor and comedian Vice Vaughn purchased an opulent three-story penthouse in the Palmolive Building in 2006 but has now put his luxury penthouse on the market for $13.9 million.

Vince Vaughn has made no secret of his love for his hometown and his dedication to the local sports teams. Since getting married and starting a family, Vaughn has invested in family-oriented homes in the Hollywood Hills and Manhattan Beach in California, he still held onto his former three-floor penthouse from his bachelor days.

Vaughn purchased the penthouse in 2006 from Hugh Heffner. This opulent three-story penthouse has about everything a bachelor could want. The property is 12,000 square feet with five bedrooms and five baths and occupies the top three floors of the building.

The 35th floor (the bottom floor of the penthouse) features the primary bedroom/bath and the four other bedrooms. The second floor contains the formal living and dining room and top-of-the-line kitchen appliances like Sub-Zero refrigerators and Wolf double oven and stove.

The top floor is the entertainment floor and would be a dream for any bachelor or young couple that enjoys entertaining. It has a built-in bar with big-screen TVs perfect for watching local sporting events. It also has a media room, billiards, and a game room. One of the best features of this penthouse is the views of the Lake Michigan shoreline and the many windows that bring in lots of natural light.

There must be something in that Lake Michigan water as the city is also responsible for turning out a nearly endless number of celebrities. Actors such as Harrison Ford, Bernie Mac, Jim and John Belushi, Frances McDormand, and Jenny McCarthy.

Politicians like President Barak Obama was born in Hawaii but later made Chicago his home; first lady Michelle Obama was born in Chicago. Presidential hopeful Kanye West is another Chicagoan. Let’s not forget that the comedy troupe Second City started in Chicago and went out to produce a plethora of talented comedians.

Many musicians and groups grew up and got their start in Chicago, namely the band Chicago (CTA) Styx, Smashing Pumpkins, Jennifer Hudson, Chance the Rapper as well as blues icons like Willie Dixon and Buddy Guy were from Chicago.

Though Vince Vaughn was born in Minnesota, the family soon moved to Lake Forest, Illinois, a well-heeled suburb north of Chicago. Vaughn was interested in theater from a very young age and had his first acting gig in a Chevy commercial.

His first movie was Swingers with his pal Jon Favreau; he has gone on to work on many hit movies as both a serious actor and as a comedic actor. Some of his hits include Wedding Crashers, Couples Retreat, Dodgeball, and the Lost World: Jurassic Park. Altogether Vince Vaughn has been in over 40 movies.