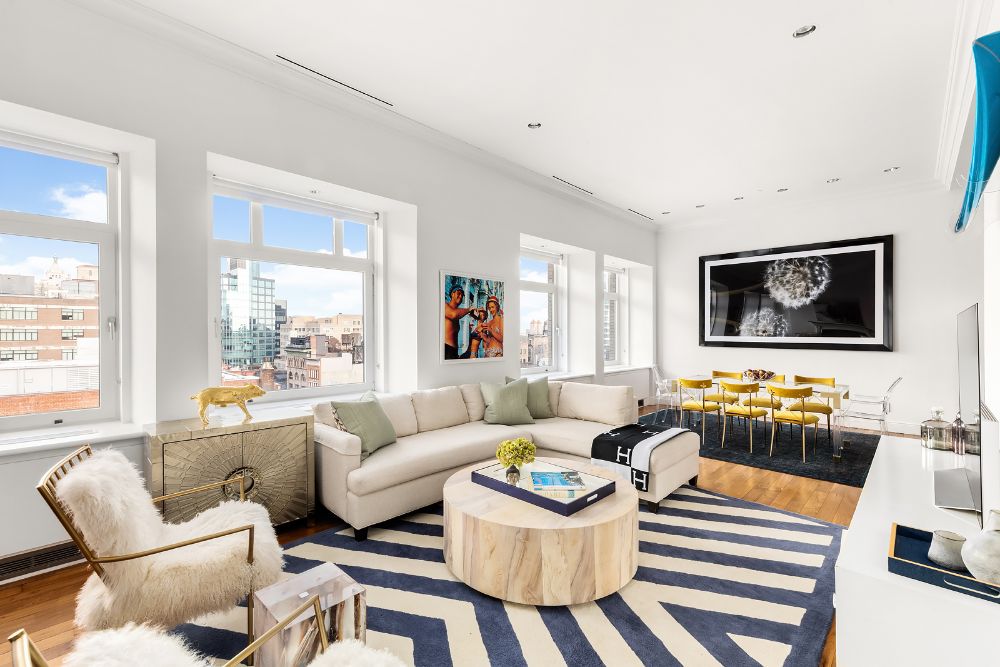 A penthouse apartment in Manhattan’s NoHo neighborhood that was once owned by Cher and Brittany Spears is now being listed for sale at a whopping $6.995 million. The 3,785 square foot property encompasses four levels and has been home to a long line of A-list celebrities. Let’s take a closer look at this stunning apartment. 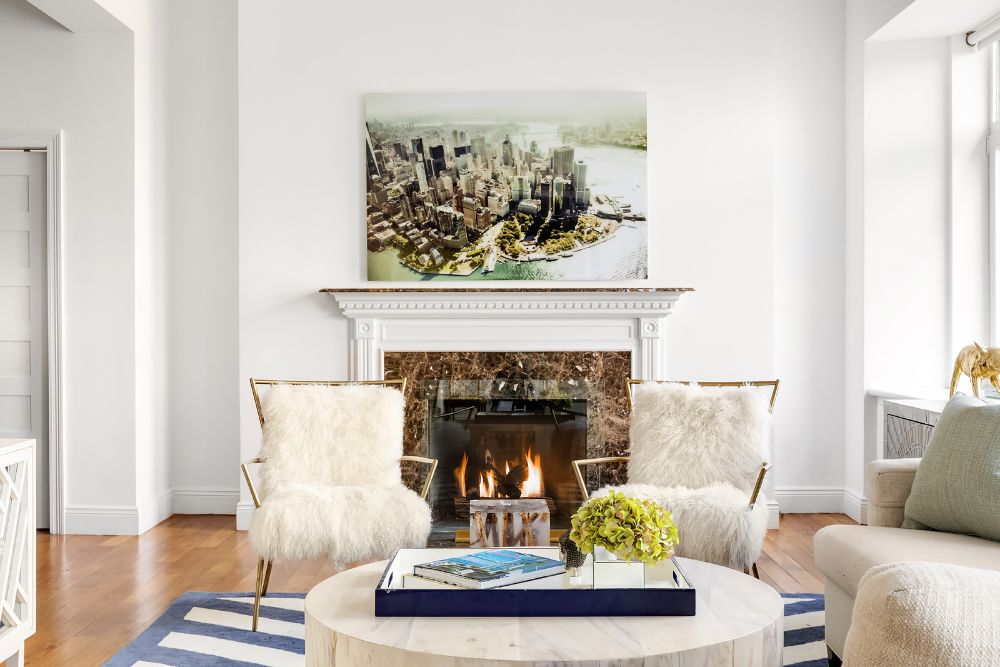 This is the living room, with multi-sided fireplace with artwork above it, two comfortable white hairy chairs, and a white wooden round center table. Image courtesy of Toptenrealestatedeals.com. 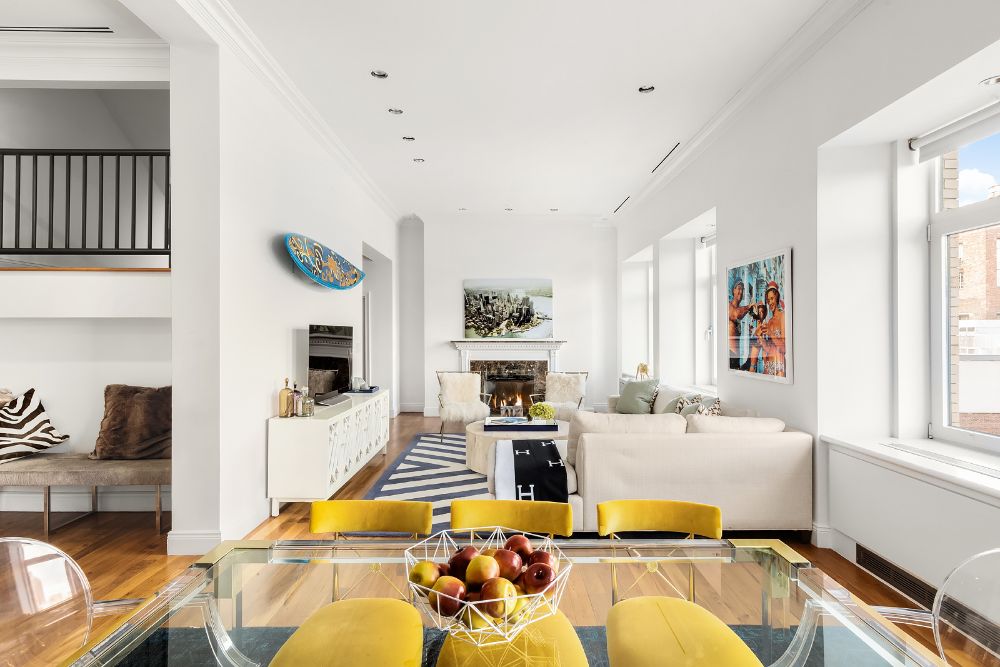 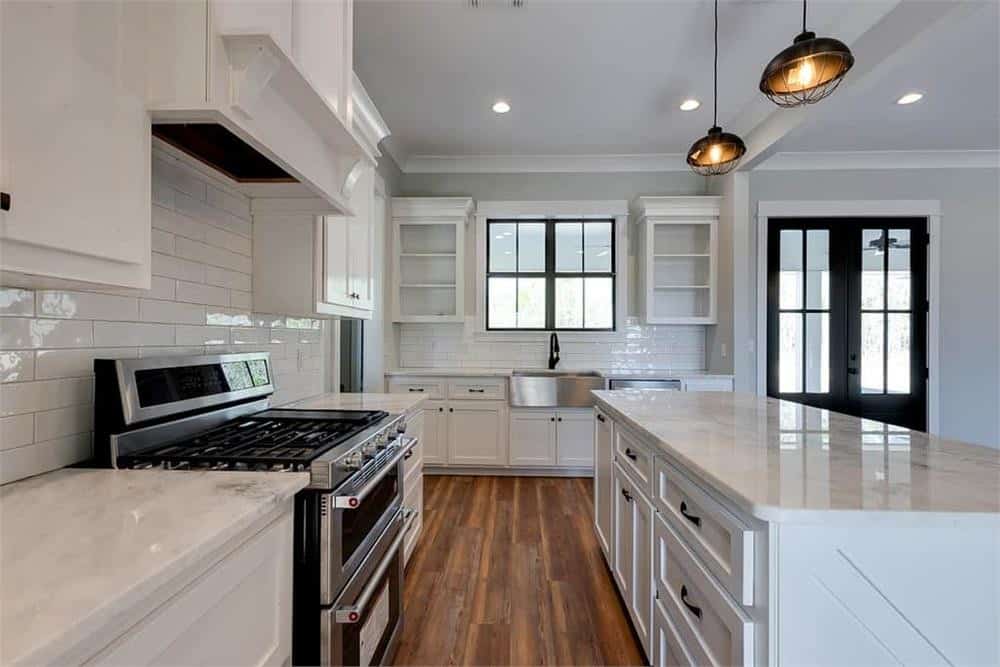 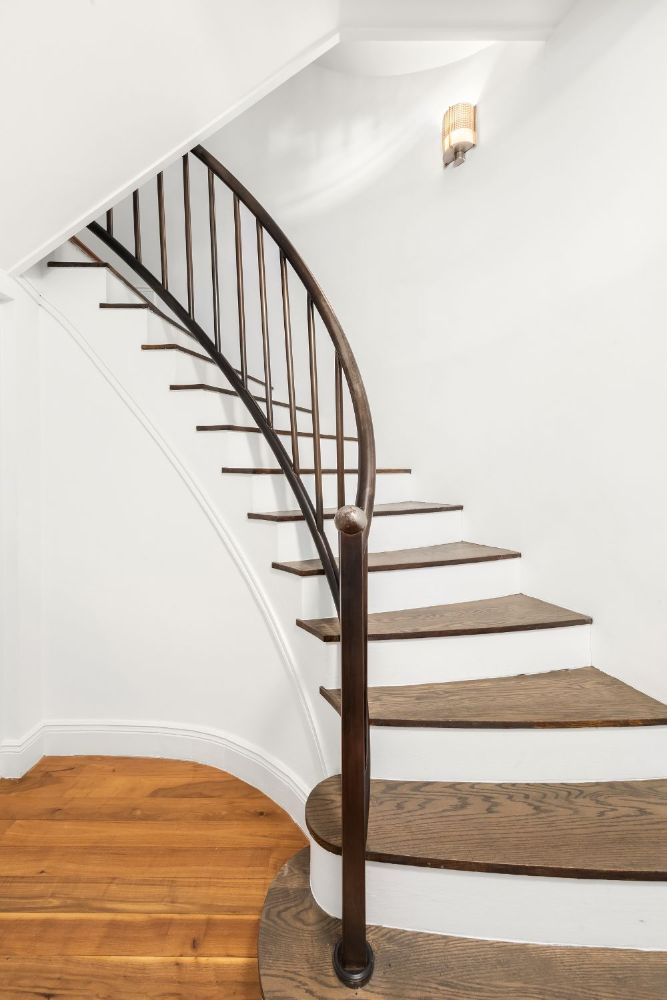 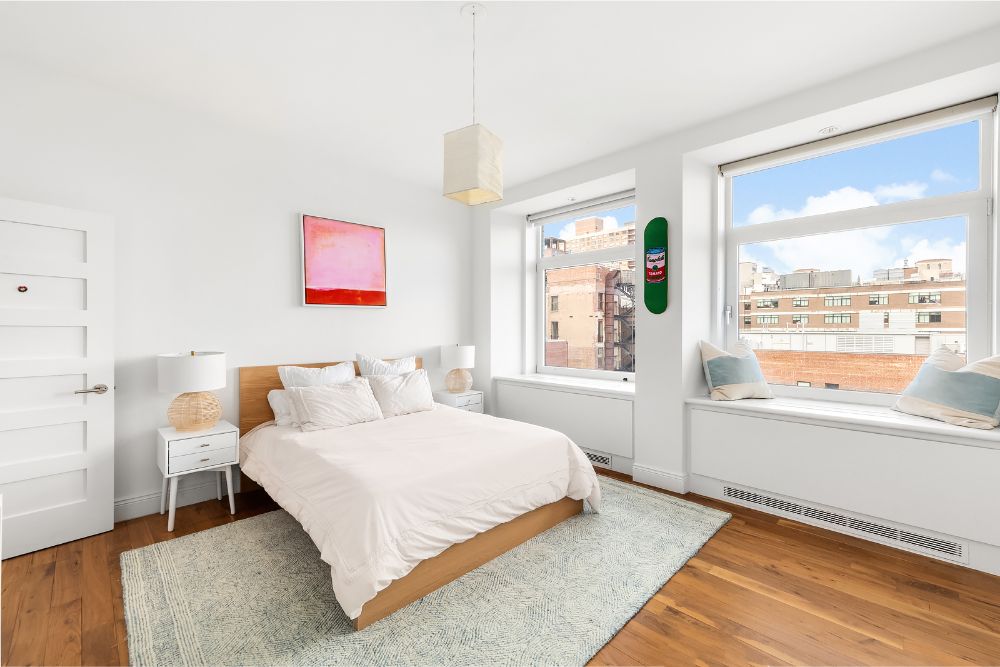 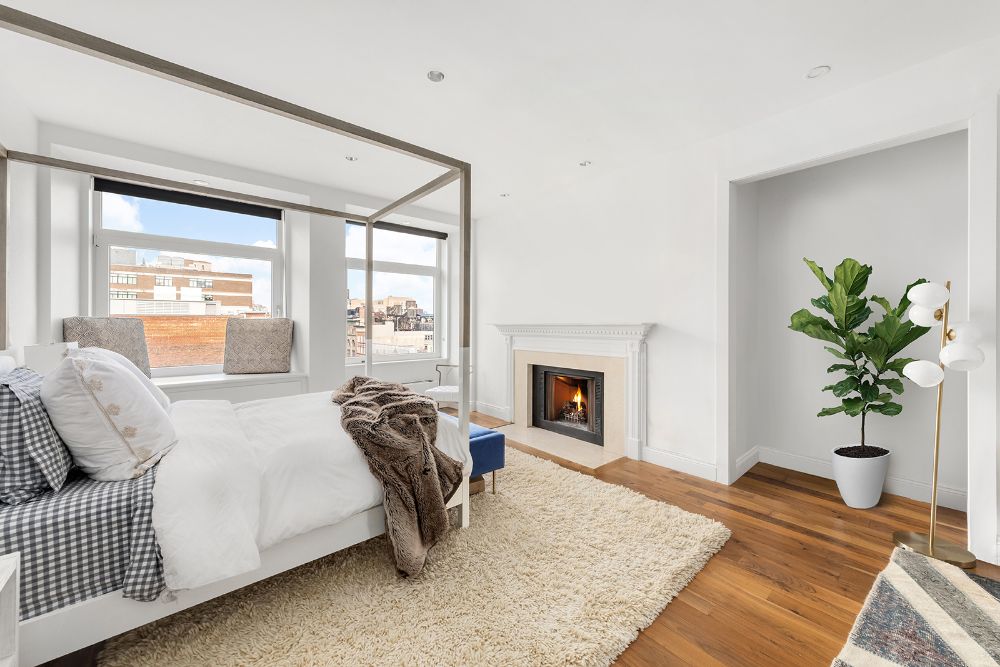 This is the bedroom, which features checkered and white bedsheets, floor rug in hardwood floor, and a multi-sided fireplace next to a plant in a white plant pot. Image courtesy of Toptenrealestatedeals.com. 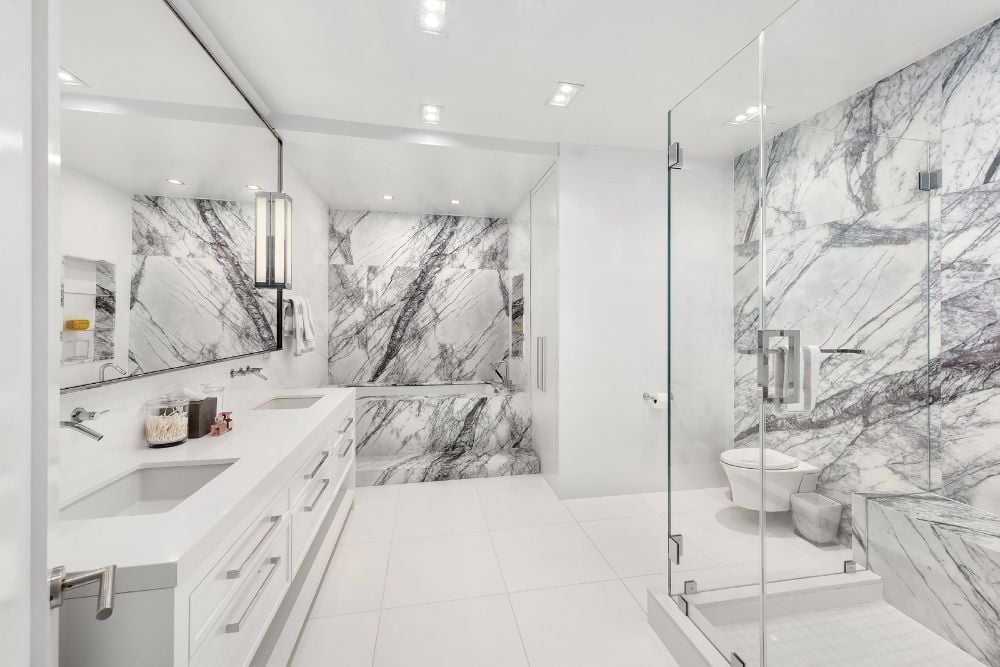 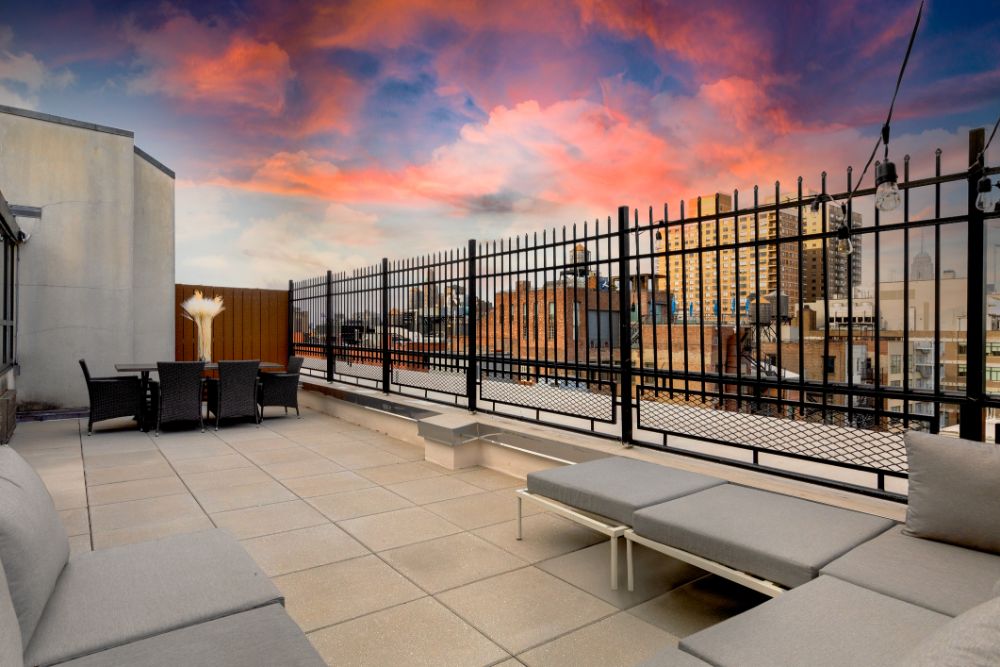 This is the balcony area, which features leather chairs, a six-setters dark-colored table set, a spear-top iron bar fence, and a stunning sky view. Image courtesy of Toptenrealestatedeals.com.

The penthouse apartment is located in the Silk Building, a historic Italian-Renaissance style building constructed in 1908. It was part of a neighborhood designed by John Jacob Astor that was once a popular location for garment factories and related businesses. The 12-story building contains 55 apartment buildings and occupies an entire block along East 4th Street between Broadway and Lafayette in what is now Manhattan’s NoHo neighborhood.

The penthouse apartment that is now for sale has been home to a long line of famous residents. In 1983, the retail space on the ground floor was rented to a famed music vendor, Tower Records. Today, that space is occupied by Blink Fitness.

Cher was the first owner of the penthouse apartment after it was converted into residences. Cher is an entertainment icon who is one of the best-selling music artists of all time, having sold over 100 million records throughout her career. She lived in the penthouse until 1990 when she sold it to music mogul, Russel Simmons, for $1.6 million.

At some point, the penthouse was purchased by Britney Spears along with the unit underneath it, which she combined to create the four-story quadplex it is today. The pop star lived there for four years and even reportedly wrote the hit song Toxic inside the apartment. It’s also been suggested that Rolling Stone’s guitarist Keith Richards once occupied the unit as well, where he had his own private recording studio.

The penthouse itself is a massive 3,785 square feet and occupies four floors. It features four bedrooms, four and a half bathrooms, and a 400-square foot outdoor terrace.

The living room and kitchen feature an open concept layout that makes it easy to navigate and entertain. There is an ornate, multi-sided fireplace in the living room that offers a sense of sophistication and charm. The penthouse also features high ceilings and large windows that let in tons of natural light. There is even a wet bar in the primary bedroom suite.

The balcony area comes equipped with a spear-topped wrought iron fence and picturesque views of the Manhattan skyline. Plus, a rooftop den could easily be converted into a fifth bedroom.

This stunning penthouse was designed to accommodate the celebrity lifestyle. It offers charm, elegance, and plenty of space. So, it’s no wonder that it was once home to some of America’s most beloved musical icons. The apartment is currently being listed for just under $7 million.