Everything from the 90s is back at the movies, on clothing racks, you name it. But should interior design be on that list? 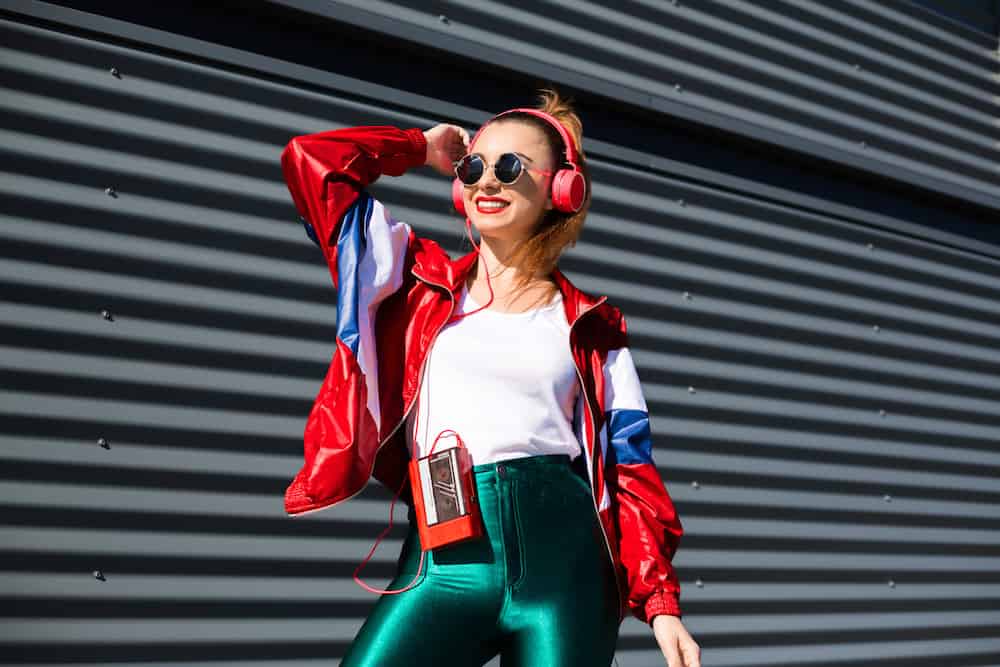 It’s happened, kids. The Roaring Twenties: Take Two will commence in less than six months. 1999 was twenty years ago. We’ve hit that point of the nostalgia cycle where everything from the mid-late 90s is coming back: angry acoustic ballads sung by musicians in floral dresses with Doc Martens. Fluorescent colorblock in everything from album covers to bedding and clothes. Lava lamps and neon-tube bar signs as home decor when the last time you lived in a college dorm, Twitter and Facebook were embyronic or didn’t even exist yet (although we’re still living with six roommates well into our thirties because aw yeah, housing crisis!)

Too much nostlagia can be a deadly thing, though. It’s one thing to pick up those cool things we saw in the 90s we couldn’t buy yet or missed the first time around, but it feels like we’re TRULY stuck in the decade now. What with almost every TV show we watched getting reincarnated on Netflix with most of the original casts, it’s like we’re trying to move forward but are being prevented from it. So, what should stay with us in this gnarly 90s revival and what should go?

The Staples of 1990s Home Design

The 90s were just as multifaceted when it came to interior design and home accents as they were when it came to fashion and graphic aesthetics. Clothing had a huge variety of bold colors and prints that were a blend of holdouts from the late 80s and coming into their own around 1992. Inversely, there was also a push towards very clean and sleek design, simple minimalist styles, and going for a “natural” look that strayed from Dayglo realm most of us strongly recall from that time. This same principle applied when it came to commercial design: Taco Bell interiors in the 90s were notorious for basically being the closest you could get to The Max from Saved By the Bell in real life. 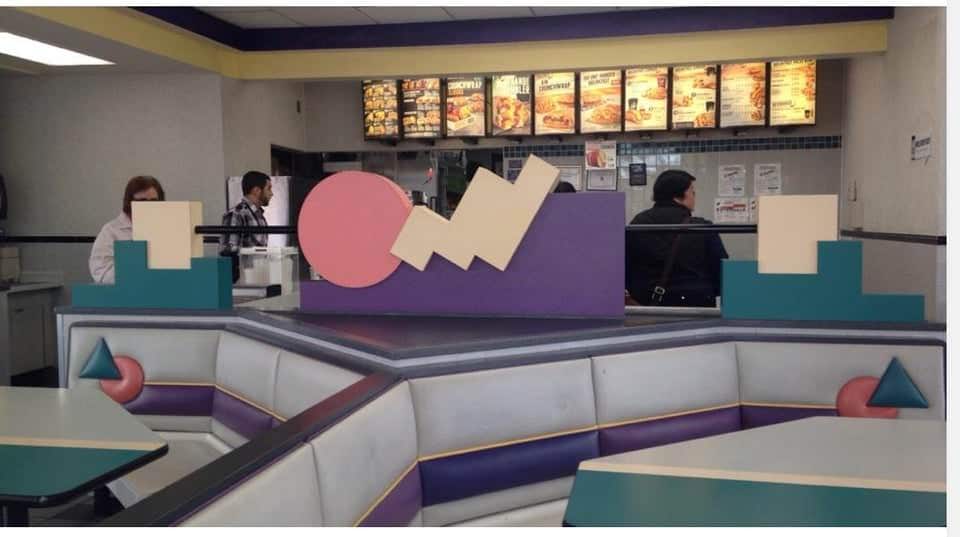 Oh, the geometry and bright color combinations! This style would go on to influence TV and movie poster graphic design, and then we got real-life versions with Trapper Keeper patterns and Yikes! erasers that came in funky shapes like this. I had a whole Ziplock full of Yikes! erasers I never actually used on my homework or drawings because they were just too beautiful and esoteric to have their forms sullied!

The love of geometry gave way to mathematically-generated fractals which frequently adorned 90s kids’ school supplies, but what didn’t make it to clothing made it more adaptable and removable things like wallpaper, wall hangings, and objets d’art. 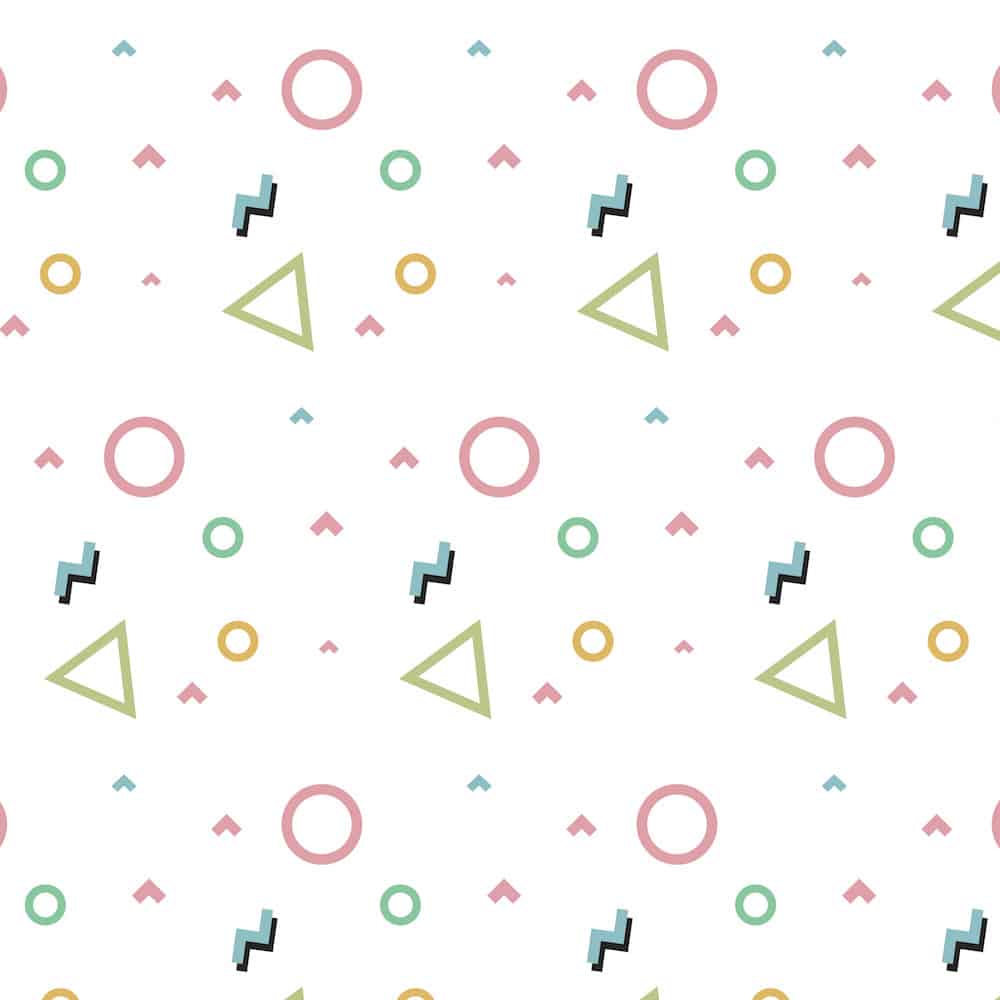 This is known as a “Memphis pattern” and while it featured more prominently in commercial properties than homes, you’d be hard-pressed to find kids and young adults who were around in the 90s who didn’t want a room in this pattern. Some were lucky enough to get bold Memphis pattern wallpaper or borders, or at least get to paint with the bright colors they called for like teal, pink, and lemon yellow with black and white. Despite their moniker, these patterns were highly associated with Miami and California inspired designs with beachy colors.

For further contrast, black became the new black. It never, ever went out of style but had a special moment in the 90s. Then as our mothers attempted to fight off the grunge and goth styles that were starting to spread from our closets and into decorating (it’s postulated that Behr had record sales numbers for Evening Hush between 1997-1999 when twee mall goths started getting their first paychecks), we were given this horror to behold. 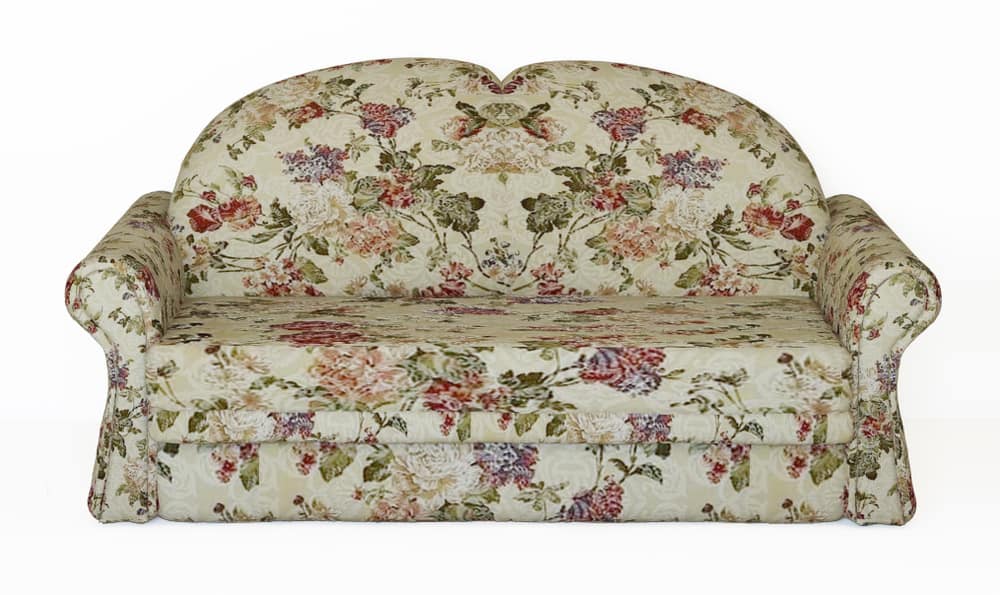 MY EYES, I AM SUFFERING RETINAL DAMAGE FROM THIS CURSED IMAGE

Who else had a living room full of those hideous overstuffed floral couches that you couldn’t even sit on because they were covered in those frilly, lace-trimmed dusty pink and forest green pillows that may or may not have been joined by some creepy-looking dolls your mom ordered from QVC in the dead of night? I never saw the appeal of trying to make a living room look like a Laura Ashley eyeglass case.

But there was a huge push towards garden-oriented decor and the “natural” look back in the early-mid 90s. Floral print broke out like swine flu as did white wicker furniture, and dried flowers were a common wall decoration. if you didn’t have those blond wood furnishings everywhere then your house probably had the original wood paneling from the 70s. Blond wood cabinets and beige carpets were a common holdout in the 90s to contrast all the brightness that was exploding everywhere. 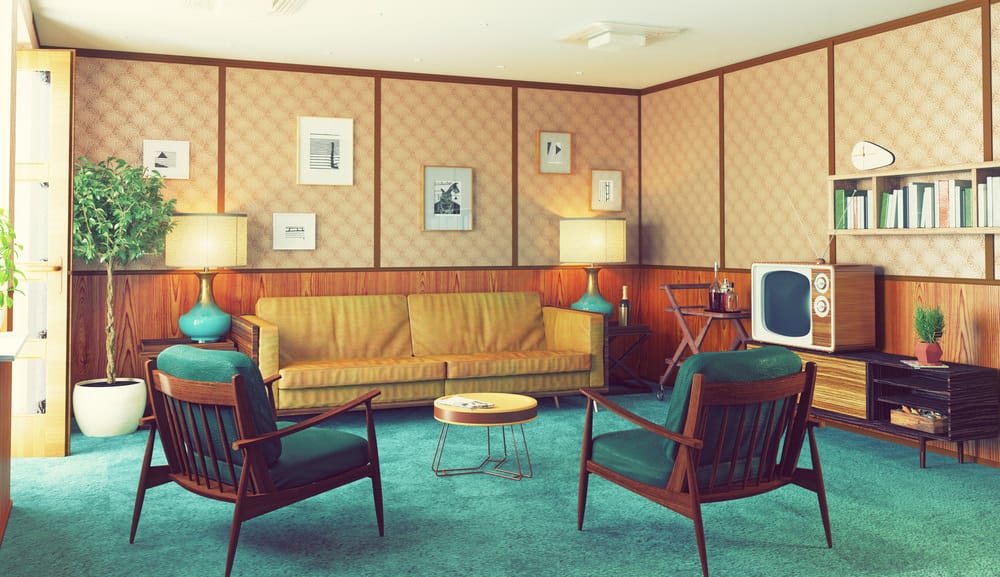 There was the Bronze Age then the Wood Age to go with that endless sea of brown. *shudders*

I remember being in many a house that had those sage and dusty rose throw pillows with more lace than a Frederick’s of Hollywood outlet store, atop those couches that had so much stuffing to the point they were practically taxidermy. Florals were inescapable and never should’ve made it to furniture because almost nothing goes with them, they’re just a poor excuse for turning old tea dresses into furniture. But holy crap, this is not an English garden where you’re getting delicate sandwiches and a cup of Assam in the parlor. It’s an overly cluttered tract house somewhere off the New Jersey Turnpike where a bunch of rowdy kids are about to lay ruin to that thing. You’re not fooling anyone, Karen.

From Bright and Flashy to “Meditation and Nature as Fashion Statements” 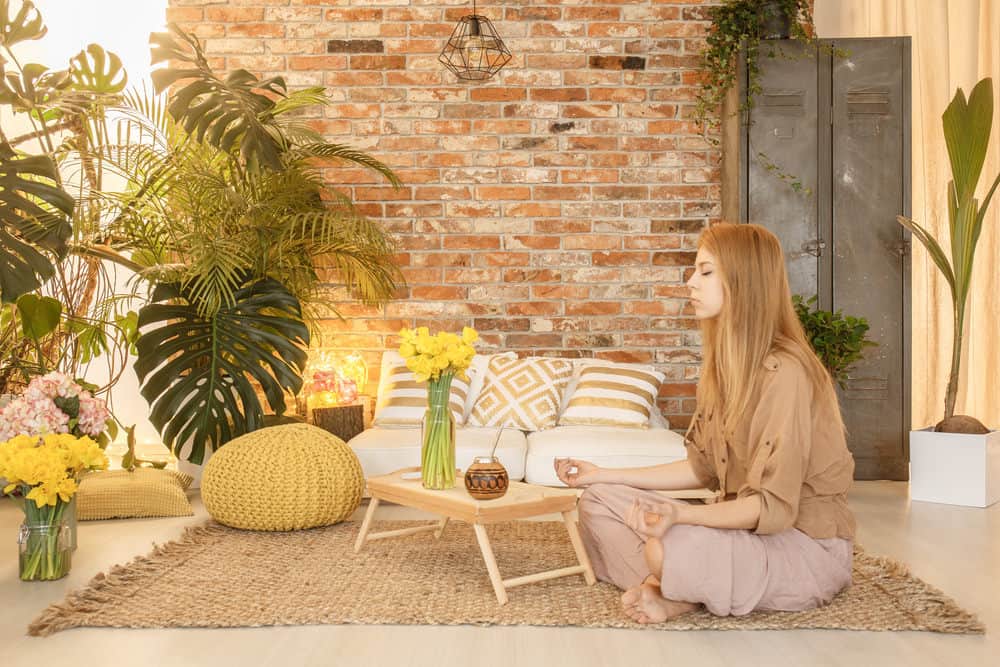 Did you just miss the hippie movement, or sell out in the 80s then start to regret it come the mid-90s when that McMansion just wasn’t giving you the happiness you thought it would? New Age was the next stop on that train. Long before Instagram influencers would post their cultural appropriation porn about chakras in flouncy Anthropologie frocks, New Age went from a music genre to a contemporary adult subculture. Enya and Pure Moods CDs were all the rage. You cranked them up on a boombox or that incredible new device called the CD-Man while waving your rain stick from Natural Wonders. You remember, that place where your kids begged for geodes that was tucked between The Gap and Cinnabon? 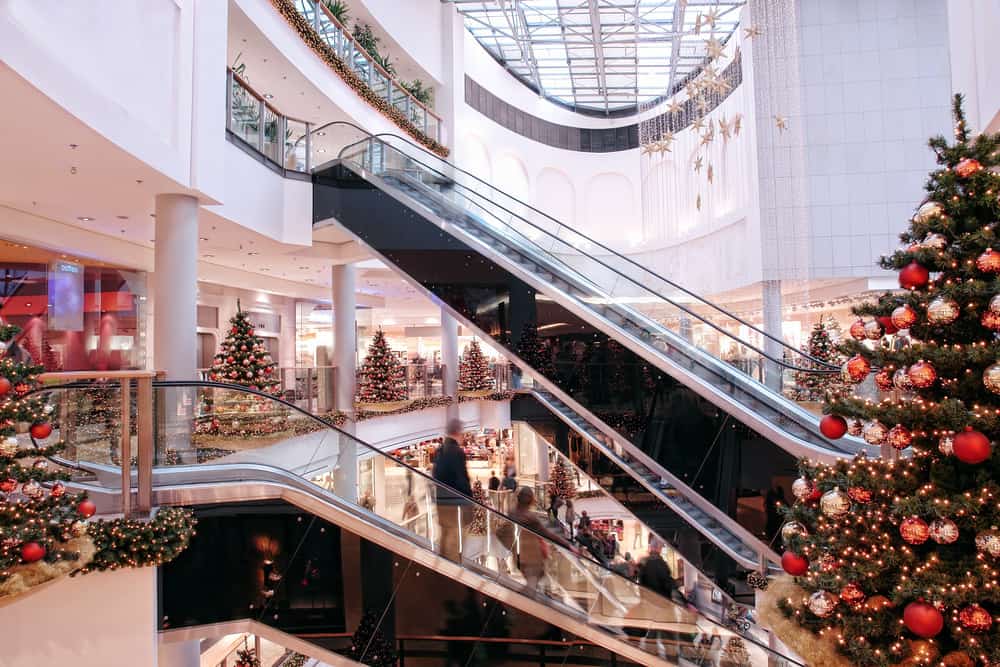 Mall culture was a bastion of the American experience in the 90s, and many of us who grew up in this time try to replicate those 90s aesthetics in both home and industrial design. Nowadays, it’s incredible how malls have simultaneously thrived and completely died out depending on what part of the country you’re in.

New Age as a music genre was around long before the 90s in that just like the punk scene, it was about a lifestyle and not just music and fashion. The music was meant for meditative purposes and not just ambient noise for a spa or yoga class. Ergo, New Age-inspired home decor was HUGE in the 90s. It was like the centrifugal point between nature goth, aging hippies, and blond wood and the natural look. Nature symbols and wood burning cutouts were found in many New Age-inspired homes, and symbols from other cultures like runes and dreamcatchers were common sights.

Hand-in-hand with the dried flowers trend, rain chimes proliferated on American porches like welcome mats. Framed inspirational messages and proverbs? Check! New Agey home designs incorporated simple lines and natural-looking colors like beiges and grays with black and white, Pops of color were cold tones on the muted side like dark blues, greens, and purples but depending on which culture you were trying on like a T-shirt, sometimes sunny yellows and oranges were seen in wall hangings or painting one wall this color to contrast that neutral beige.

Crystals also played a prominent role in both meditations and spiritual practices by Silicon Valley types looking for meaning in life, but around America they appeared in all kinds of homes in place of the tchotchkes normally seen in curio cabinets. You’d be hard-pressed to find a middle or upper middle class home that didn’t have at least one amethyst formation laying on a shelf because it was a way that you could own a precious gem and show off without totally ruining its natural state. 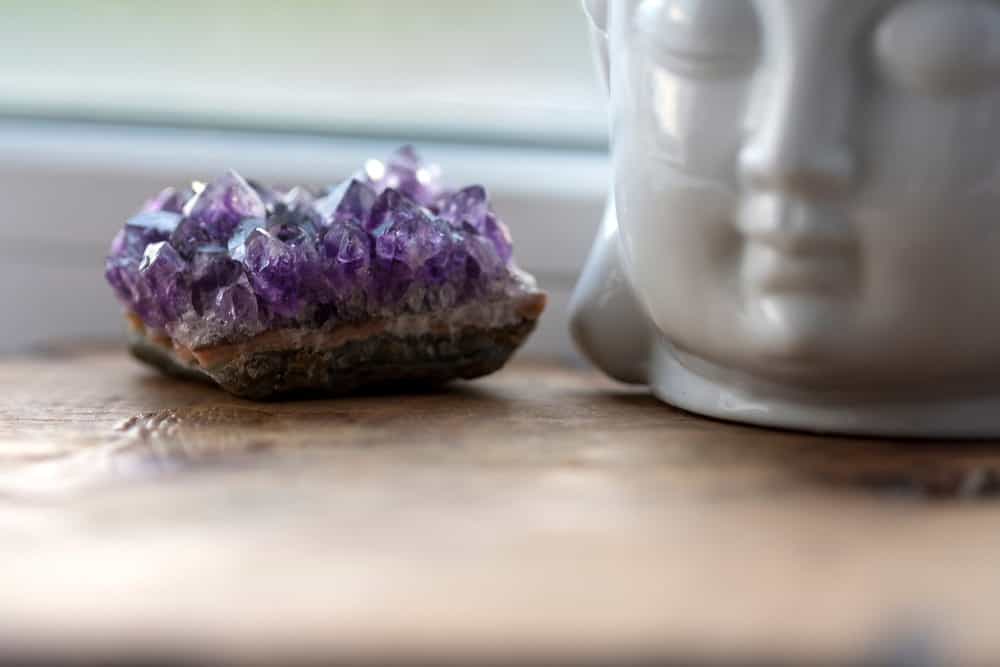 Crystals were just the next evolution after dried flowers and frankly, more allergen-friendly even if they didn’t necessarily ward off evil spirits like the saleslady at Natural Wonders said they would. You had to go a few doors down to Sharper Image for that.

So, What Should Stay and Go?

Those T-shirts with the teal and purple Solo cup design? Two thumbs up. They’re an amazing study in graphic design and how to make these everyday objects in your home and life totally memorable. But there’s so many other things that really just shouldn’t come back from the halcyon days of petting your Furby while watching Daria. Like, check out this Furby: 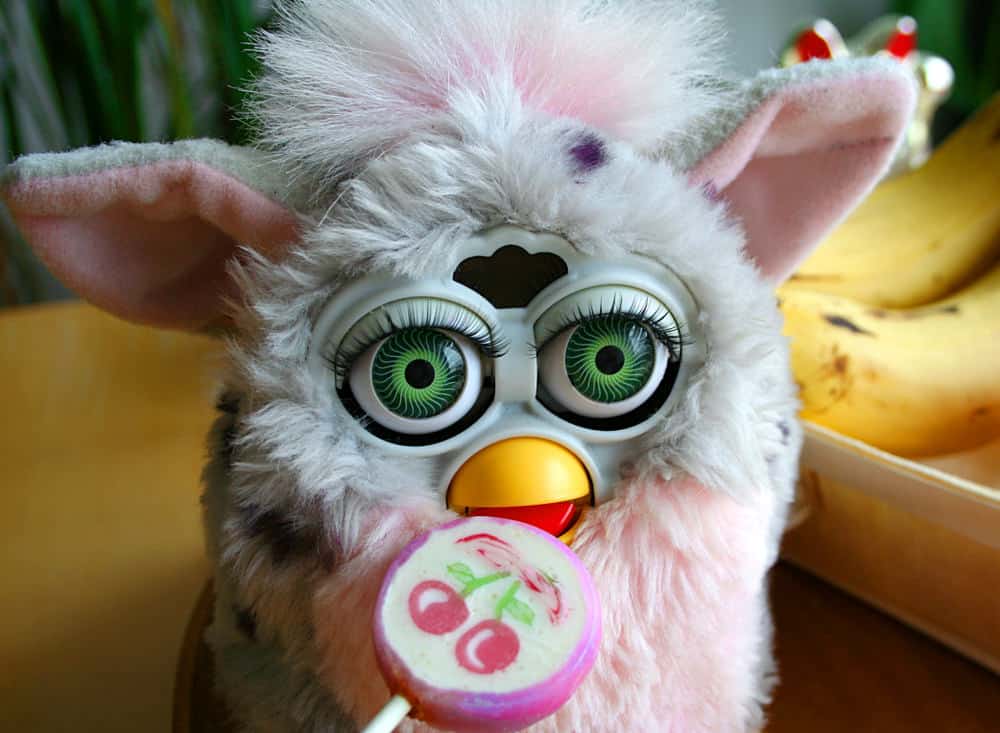 Sapphire blue lipstick that matches the Jello chair? Wait no, that can stay. I just rocked some at E3 after my color refresh was nice and bright.

Who else remembers salivating over dELiA*s and the lesser-known but more comprehensive Just Nikki catalogs and sighing in envy not just over what was for sale, but the sets they used? Bright colors had become a staple by the late 90s and it wasn’t just for tween girl bedrooms anymore. We were entering not just a new decade, not even just a new century, but a new MILLENNIUM! And you had to paint up that Y2K bunker full of Pop-Tarts in style, man. 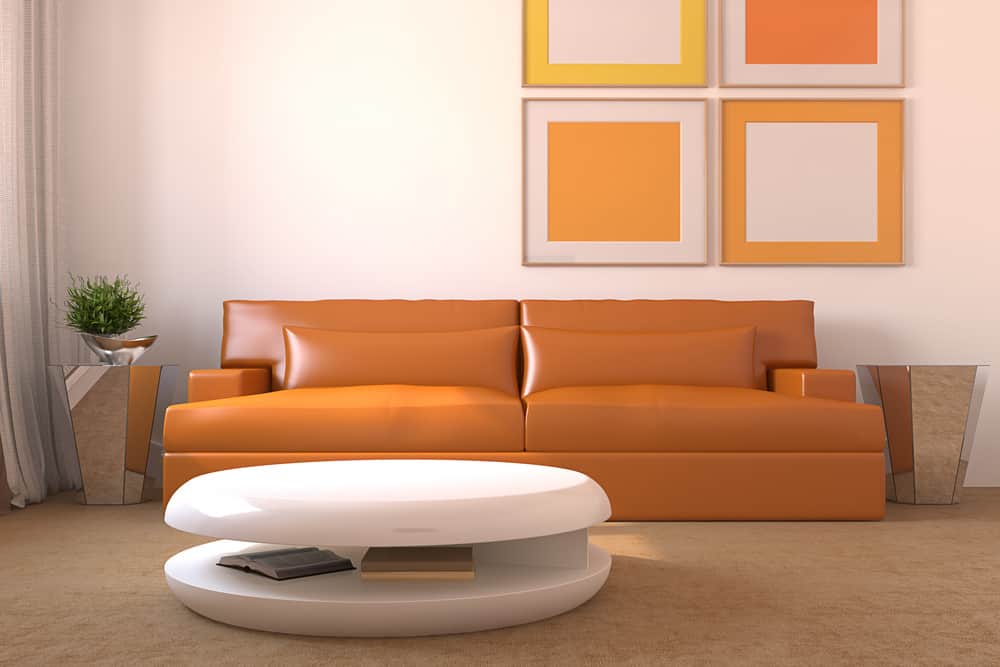 Futuristic whites and silvers were frequently accompanied by tangerine or lime walls, accents, and borders. The neon craze had died down a little, New Agers swapped out their rain sticks for tech IPOs, and goth kids frantically looked for black couch covers after grudgingly accepting those ugly, but free, floral couches for their first apartments. The era was coming to an end and the early 2000s were going to come into their own. Pendant lights were really hot for how 90s people envisioned the future would look, so if you didn’t have tangerine accents amidst white and silver then you tried to find matching lights that went with your couch. Some of these pieces still have such elegance and orange is such a gorgeous, joyful color when applied well to a sunny room. It’s also interesting looking at how previous decades envisioned the future.

Jello chairs were all the rage. The Just Nikki catalog even had Jello COUCHES and beds, and while my 13-year-old self thought that was unfathomably cool, my adult self says “This is the one time I agree with the phrase ‘the free market at work’.” They came in every color of the rainbow, I recall having a lovely frog-green one for my room that was comfortable only if you never ever wore shorts or sleeveless garments. Inflatable furniture is easy to move but not something you want to sit on for prolonged timeframes. Let’s keep this one confined to the era when The Simpsons was still good.

Ditto for the bead curtains. They were a throwback to the 70s as the nostalgia cycle cranked up around 1997 and didn’t stop until I was on my way to college, as all these attempts to recreate the 60s and 70s were made. Those plastic bead curtains every teen girl had around her bed looked fun in catalogs and at Spencer’s Gifts, but getting hit in the face with them on a windy night wasn’t as fun. Neither was getting your hair stuck in the clasps.

What’s your favorite 90s aesthetic? What SHOULDN’T come back? 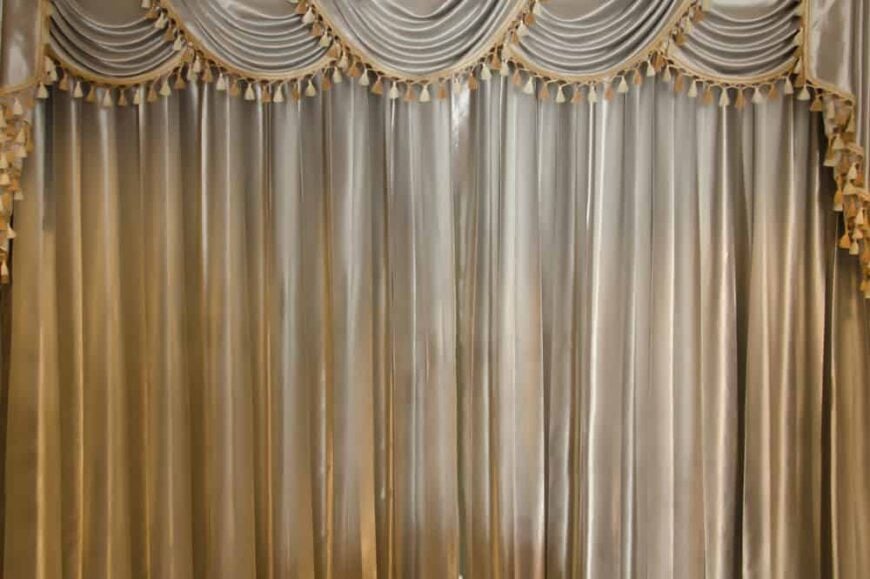 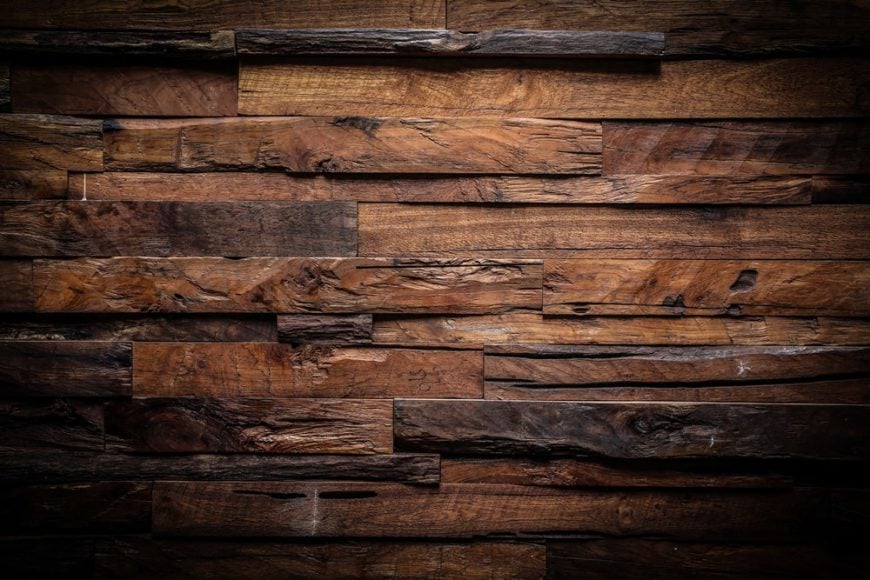 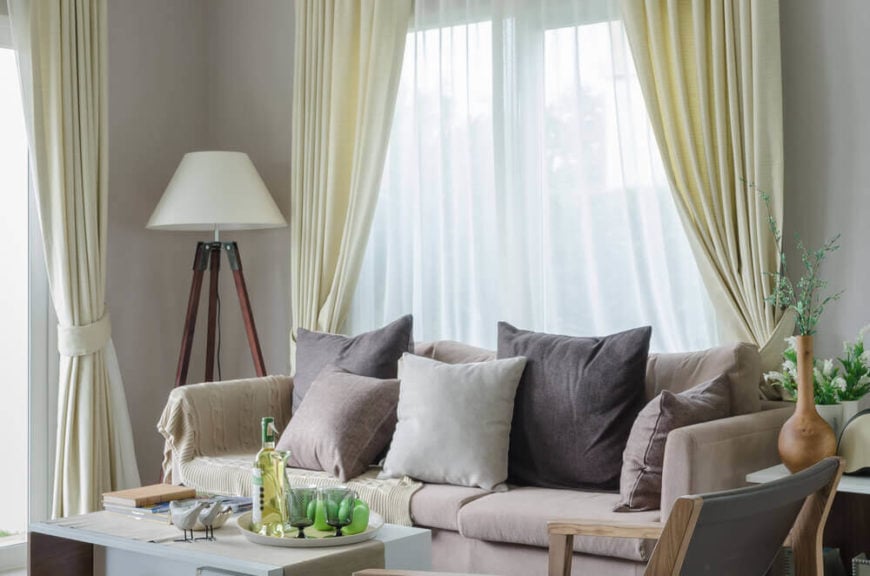 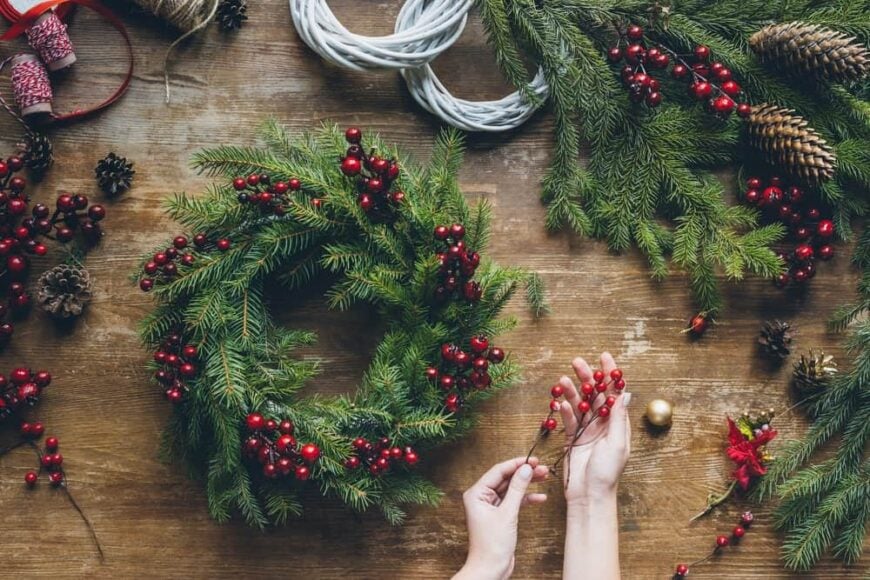