During the 2020 Covid 19 pandemic lock-downs, people watched way too many videos on social media sites like TikTok, YouTube, and Facebook. Content creators responded, making videos about all sorts of things, from gardening to cooking to coffee making. Some providers posted videos of making coffee drinks. One trend that exploded in the United States due to social media videos was the making of a special kind of coffee that has been popular for years in places like Asia and Eastern Europe–making whipped coffee.

This kind of coffee is called by many names. In some places, it is called whipped coffee, while in others it is called thick coffee, fluffy coffee, frappé coffee, or cloud coffee.  In Greece, this coffee is called Greek iced coffee and in India, it is called an Indian cappuccino. In Korea, the name is Dalgona coffee, so named because the fluffy topping resembles a kind of candy named dalgona that is popular there. Whatever the name, this delicious and appealing beverage consists of a fluffy layer of beaten, sweetened coffee that resembles frosting atop some kind of milk over ice. 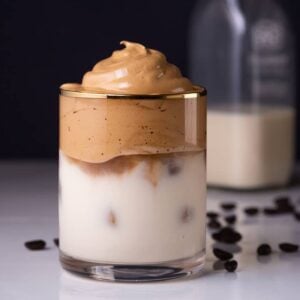 April Freeman
Thick, rich, and easy to make, whipped coffee looks like a coffee flavored version of whipped cream. Whether you want to make our recipe for whipped coffee using a non-dairy milk like almond milk, soy milk, or oat milk, or you prefer conventional dairy products, this recipe is a show stopping drink that you can make and serve any time of day. You do not have to wait to go to the coffee shop to snap an Instagram worthy coffee picture. With our recipe for Whipped Coffee and just a handful of easy to find ingredients, you will always be ready to serve this beverage.
Print Recipe Pin Recipe Add to Collection Go to Collections
Prep Time 2 mins
Whipping Time 3 mins
Total Time 5 mins
Cuisine American
Servings 1 Serving

The prep is simple for the coffee foam. You simply mix together hot water, instant coffee crystals, and sugar. After the sugar and coffee crystals are dissolved, you can whip and beat the mixture. In less than five minutes, the magic happens. The mixture starts out the color of a cup of black coffee. After a minute or two, it begins to lighten to a deep brown. Continue beating and eventually the mixture turns to a light caramel color. Air begins to become trapped in the mixture, and it starts getting fluffy. Keep beating until it can hold soft peaks.  The coffee foam is then spooned on top of a glass of iced milk. You can use whatever kind of milk that you prefer. Vegans love this recipe because they can make a creamy, delicious coffee drink without having to use any animal products. Almond milk, soy milk, rice milk, or oat milk all work equally well in this recipe. Alternatively, if all you have on hand is traditional cow’s milk, the drink will still be tasty and delicious. One thing to keep in mind, however, is that this recipe can only be made with instant coffee crystals. Other kinds of coffee will not work. Instant coffee crystals are designed to dissolve into a liquid, so other kinds of ground coffee are just not effective in this recipe. Additionally, instant coffee has an additive called xanthan gum which helps the whipped coffee whip into soft peaks and keep its shape. We have shared the basic recipe for Whipped Coffee. However, like all good recipes, this one can be tweaked and adapted for your specific tastes. You can pour chocolate milk into the glass rather than plain milk for a drink with a more mocha flavor. You can drizzle caramel in the inside of your glass to make an impressive beverage with a caramel flavor. As you are whipping the whipped coffee froth, you can add vanilla, rum, maple, or almond extract to change the flavoring of the foam.  While our recipe uses an electric hand mixer, if you don’t have one in your kitchen, that is perfectly fine. There are other alternatives to make this tasty drink. In places like rural India, this recipe is made by hand, with the coffee maker whipping the froth with a spoon or a wire whisk. This may take awhile and will probably wear out your hand. Another option is to put the mixture into a Mason jar with a tightly fitting lid and shake the mixture until it becomes fluffy. It won’t whip up quite as thick, but it will work in a pinch. If you have a high quality milk frother, that would work as well.  For the quickest frothing, you want to put the mixture in a container that is rather deep. If you have a wide-mouthed mason jar that will work well if you are using an electric mixer. When you use a narrow, deep container with an electric mixer, use a single beater in the mixer. A small mixing bowl works fine too, but make sure that it’s about three or four times the volume of the initial ingredients to allow space for lots of fluffing.
Keyword Recipe, Snack, Whipped Coffee