What’s Up with the Backyard Chicken Farm Craze? - Home Stratosphere Skip to content

Move over, toilet paper: people are now panic-buying LIVE CHICKS. But just like the pets that people get for Easter which wind up being horribly neglected, we could unfortunately be seeing the same with adult chickens in the near future. 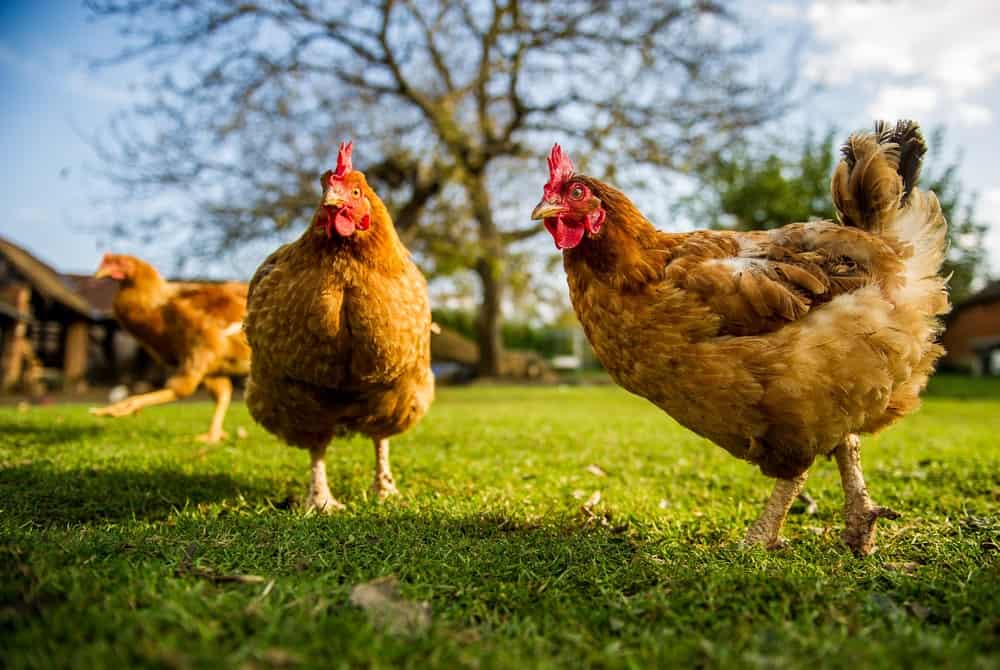 After the pandemic was declared, people began to panic-buy at the grocery store. Toilet paper shortages are being reported all over the US, and no one can get bread so making your own has become an essential skill. Depending on where you live, canned goods are in abundance while fresh produce rots, or you can still get canned beans but you’re out of luck if you want to get anything other than tomatoes and eggplant.

Some people are mitigating their risk of catching coronavirus by ordering through grocery delivery services like Instacart and Peapod, others are getting shelf-stable dry goods shipped through places like Amazon, Nuts.com, Vitacost, and others and limiting grocery hauls to fresh and frozen foods only then dashing out.

As a result, more people are trying to grow their own food than ever before. (Make sure your garden welcomes toads if you’re doing this!) If you already had a garden, you were ahead of the curve and probably seeking out more seeds. But plenty of people who are new to gardening are starting to turn their thumbs green now because it’s a perfect storm of needing to go out for food less, and having more time and energy for this endeavor. City folk like me are screwed, but this is a good time to live in a suburban or rural area where growing your own food is more plausible.

But what about dairy and eggs? Not everyone eats these foods, and most people don’t have a cow in the yard to get fresh milk and make their own cheese and yogurt like we’re all up in some Little House on the Corona Prairie kind of shit.

Well, that is apparently not stopping people. Cows are hulking beasts and your HOA would probably flip out if one started started munching the chemically-treated grass adorning your subdivision. But chickens? They’re the new breadmaking. People are buying them at record rates so they don’t have to buy eggs often.

Oh lordy. We’re going to have to explain that raising chickens is nothing like Stardew Valley. 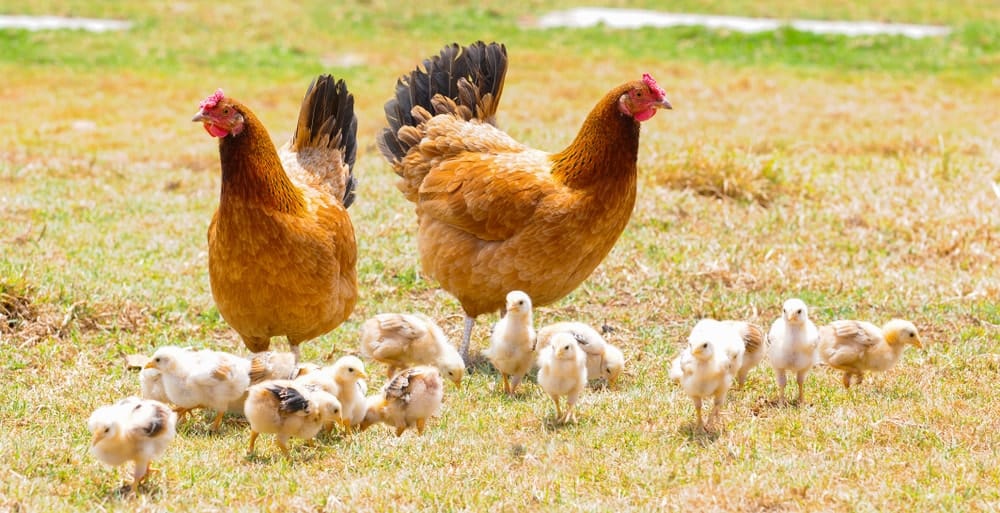 So, some people already engage in this questionable practice of buying chicks around Easter. A lot of rabbits also end up at animal shelters about a month after Easter as well. Please think really hard before getting any kind of non-traditional pet, they are a commitment! You’re not shooting a commercial for Easter candy then bringing that chick back to the farmer.

Subsequently, this time of year is when chicken farmers usually see an uptick in business. But while countless sectors of the economy are struggling, chicken hatcheries are seeing an unprecedented business boom.

Interestingly, live chicken sales also tend to go up during hard times and periods of uncertainty, like the Great Recession and presidential election years. With the United States now facing a 30% unemployment rate exceeding that of the Great Depression, a contentious election year, and a once-in-a-century pandemic? Wholesale egg sales rose over 50% and have been on an upwards trajectory to the point that eggs are becoming as scarce as bread, if not scarcer, at grocery stores. Chicken farmers and hatcheries are doing fantastic, unlike restaurants right now.

But just like the pets that people get for Easter which wind up being horribly neglected, we could unfortunately be seeing the same with adult chickens in the near future. Because farmers are concerned that people aren’t going to care for them properly, just to avoid a trip to the store. 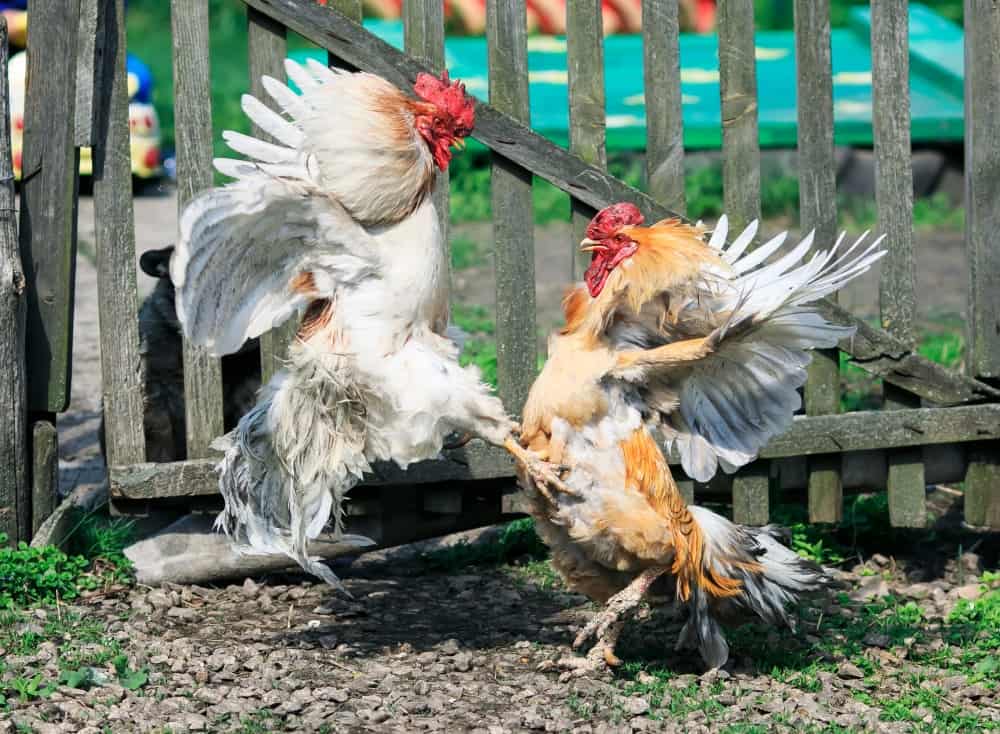 For instance, did you know that chickens were not actually initially bred for food, but for fighting? That plate of buffalo wings you devoured used to be an animal that packed a punch like Liston! While chickens are actually pretty intelligent animals, some of which even communicate some form of affection to humans if well cared for, they can also be pretty aggressive if you’re not careful and they have a living situation that’s the fowl equivalent of the misery dorm.

Just like with more ubiquitous pets like dogs and cats, there’s dozens of chicken species. Some of them are going to be needier than others with specific needs like diet, climate, living space, and more.

If your primary goal of getting chickens is so you don’t have to buy eggs, don’t forget that they need to eat too! What kind of chicken feed do you have on hand? How will you get it? It’s not like in the cartoons where you just open up a bag of dried corn and let them have at it. Depending on the chicken species and age, they have fairly specific nutritional needs and you really should do your research first. Talk to a livestock expert and look up chicken-rearing resources, such as My Pet Chicken. (I need to make the toad equivalent of this website, stat.)

Which according to them, chickens begin laying eggs about six months from hatching, though larger breeds like Plymouth Rocks can lay eggs as quickly as 16-18 weeks (about four months). However, according to other chicken experts, you can only expect these chickens to be in their egg-laying prime for about two years.

In that time though, chickens can get sick, injured, and be at risk for theft and devouring from neighbors, their pets, and wild animals. As I covered in my piece on prepping for the arrival of exotic pets, PLEASE make sure that you can get proper veterinary care before you adopt! This is no different for chickens as it would be toads and dinosaur puppies. Do you have a vet in your area who’s an expert in avian health? A livestock vet, or do they only see large animals like cows?

At the time of writing, only cats have been found to also be transmissible for the novel coronavirus and a tiger at the Bronx Zoo was found to have it. But the Bronx Zoo has in-house zoologists and infectious disease experts who watch for how wild animals can transmit them, all you have is Google. And us, apparently. So while chickens are likely not at risk so far for COVID-19, bear in mind that they can get avian flu. If you were around for that in the Bush years, it was like a drone strike on goose populations and some livestock before it got to humans. Not trying to scare you here, but the H5N1 flu strain transmitted from chickens to humans directly in the 90s in Hong Kong, killing six on impact.

While you’re unlikely to get bird flu, it could be likely in your area regardless of what happens with humans and COVID-19. But while it was already a challenge finding veterinary care for nontraditional pets before, it’s even MORE challenging now, so make sure that you not only have access to a vet who knows chickens, but also one who is able to make house calls if they get sick (you can communicate by text while they’re outside with the birds).

Is Your Yard Actually Amenable to Raising Chickens? 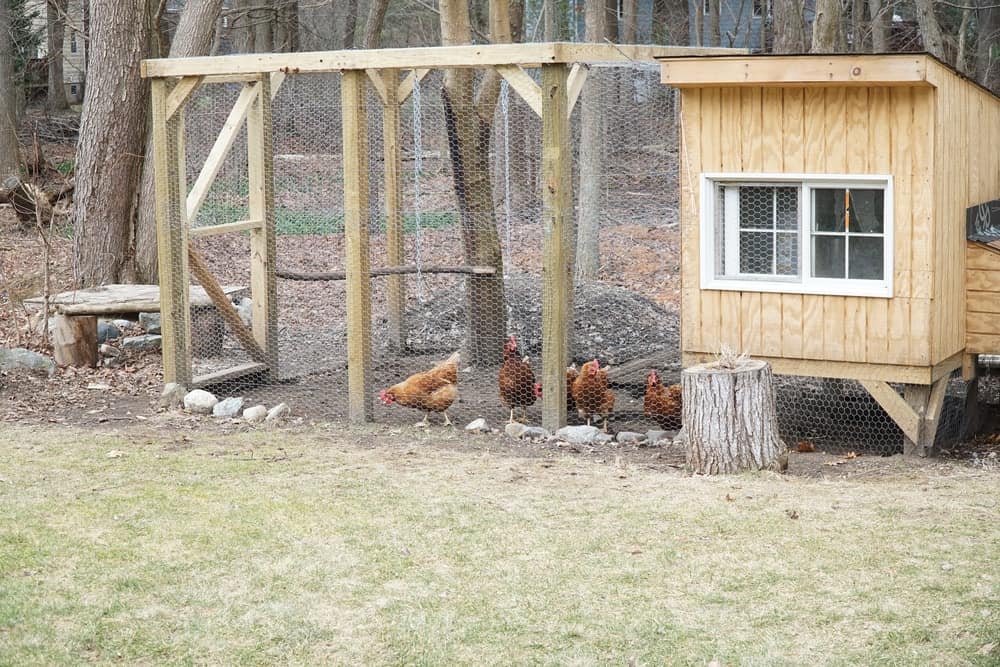 On that note, chickens are outdoor animals. You need to get the right type of enclosure for them, that Treehugger piece we linked recommends at least two square feet per bird. My Pet Chicken comes to the rescue with blueprints you can purchase for different coop sizes plus free care sheets, though it begs the question if you’re handy enough to build this sucker.

Because it’s now become difficult, if not impossible to buy anything beyond food, cleaning supplies, and digital goodies right now, you should check if you have the materials on hand to build from this blueprint. If you’re not handy and need to hire someone to do this for you, see if you can keep with social distancing guidelines by communicating via text or direct message from inside your home, and Venmo them for their services. But we’re not playing Stardew Valley, you don’t get a fully-built and operational chicken coop in 2-4 days here.

You also need adequate fencing to keep wild animals and hungry neighborhood dogs out. Like with the building materials, can you put up a fence securely? Do you have a way to buy chicken fencing, or wait for a delivery?

It can cost anywhere from $150-5,000 to build a chicken coop. Repurposing garden sheds is an easy and economical way to house your chickens, and before the pandemic, people would also use leftover shipping pallets to build coops. Nonetheless, if your main goal here is to avoid buying eggs and gassing the car despite those low prices right now, you should bear in mind that a coop can be a significant financial barrier if your income is gone or took a major hit.

Depending on how your yard is set up, it may be completely inhospitable to raising chickens. If any hatcheries near you still have chickens, ask the farmer what kind of setup they recommend and if you need to make any other modifications to your yard first. You need to know what you’re getting into, that includes making any necessary changes to your home. 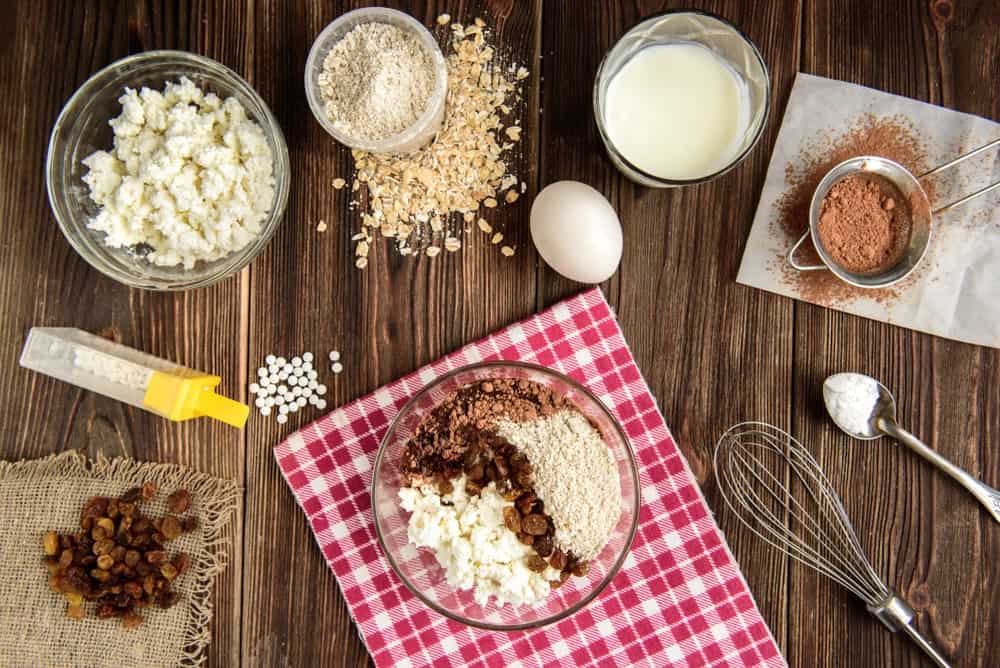 If running out of eggs is your main worry, you don’t even need chickens. There’s plant-based substitutes!

I am giving the following suggestions not to be preachy or anything–I’m pretty live and let live. Rather, these egg substitutes are common knowledge in the vegan and egg-free baking communities. My experience with them comes from years of not feeling like buying eggs in good times because these substitutes are more convenient and shelf-stable than fresh eggs. After all, if an egg falls on the floor, you lost an egg and it creates this gross mess you have to clean up. If some flax or chia seeds fall on the floor, there were plenty more in the jar or bag.

Not going to dive into the semantics of vegetarianism vs. veganism, but the latter eschews eggs while the former can be open to eating them or foods made with them. It turns out that people with alternative diets, or very specific dietary needs from gluten allergies or needing to cut carbs, were a step ahead of the game with flour and yeast shortages we’re currently facing.

The following probably won’t cut it if all you want is some scrambled eggs or a souffle. But if you’re craving a brownie at 3AM and don’t have eggs, don’t panic! You don’t need to turn your backyard into an impromptu chicken coop just because you want to have them on hand for cakes and “stuffing waffles”, but you can also make egg-free quiches! (The linked recipe is a great and cheap way to use up random bits of veggies you have laying around.)

Whether you want to give these healthy plant-based egg substitutes a try, or just hold out until the store has eggs again, you want to give raising chickens as much extra thought as possible. Things seem really bad and awkward right now, but think about if you really want to add a bunch of avians to the mix.

At least if you panic buy toilet paper, it WILL get used! Panic-buying live animals doesn’t end well. Ever. 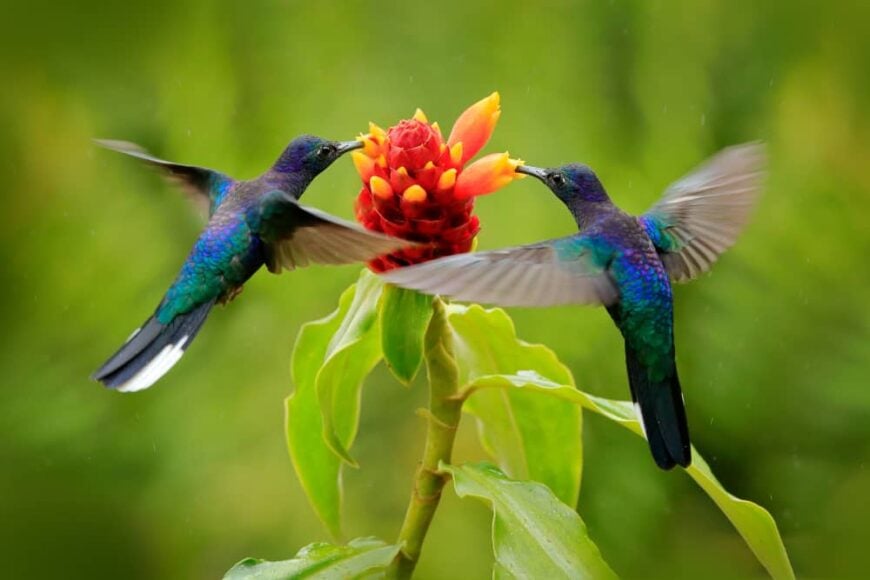 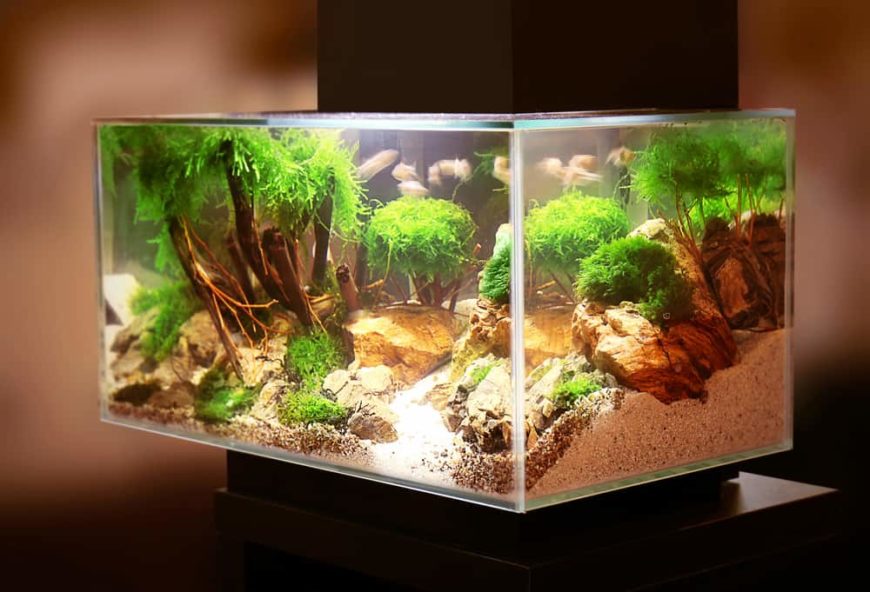 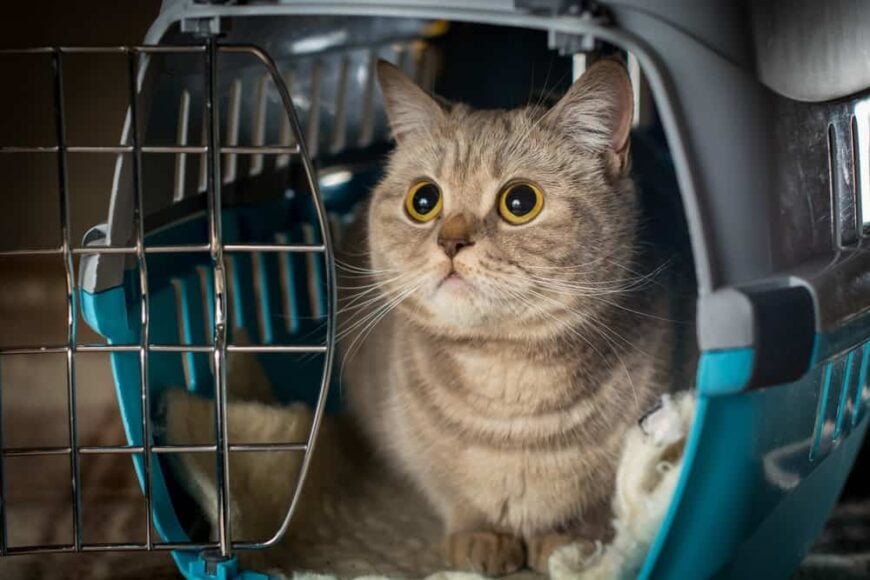