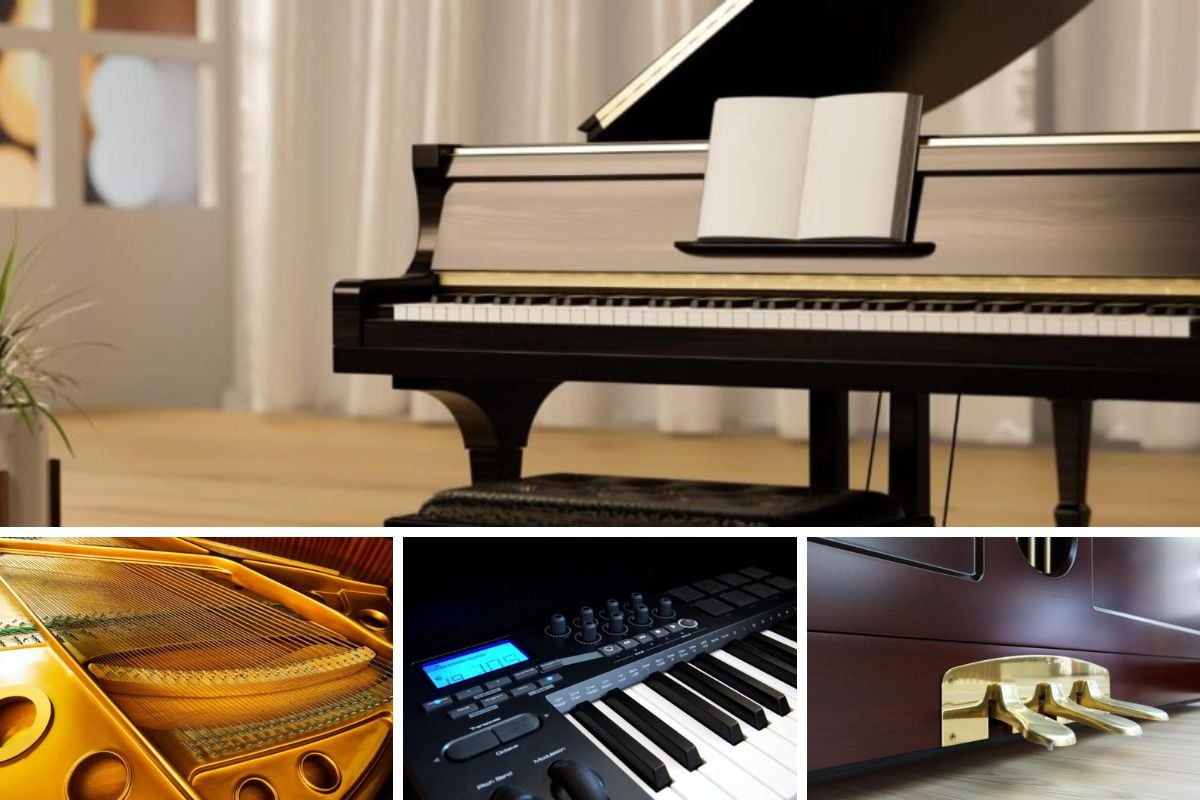 I remember taking piano lessons as a child, and a piano tuner came to the house. We had an upright piano at the time. When the tuner opened the top, he asked me if I wanted to look inside the piano.

I was amazed at all the strings and hammers inside. When I practiced, agonizing over reading the music and matching my fingers to each note, I never thought about what was going on inside the piano.

Learn more about pianos and how the strings create beautiful music when you hit the keys.

Table of Contents Show
What type of instrument is a piano?
The pianoforte was the first piano and made its appearance over three centuries ago.
How does a piano make musical sounds?
Soundboard
Piano harp
Action
How do the three piano pedals work?
What is the difference between a grand piano and an upright piano?
Grand Piano
Upright Piano
Is a digital piano a string instrument?
Are digital pianos the same as electronic keyboards?
Should I buy an acoustic upright piano or a digital piano for a beginner?

What type of instrument is a piano?

A traditional acoustic piano is a string instrument, also known as a chordophone, although they’re often called keyboard instruments.

For decades, the piano was a fixture in homes and most children took piano lessons. Today, traditional pianos are being replaced with digital pianos and portable keyboards that imitate the sound of a string piano.

But, let’s talk about how traditional pianos came about, with their history that dates back over three centuries.

The pianoforte was the first piano and made its appearance over three centuries ago.

Pianoforte is Italian for ‘soft-loud’. This piano was the first of its kind, invented by an Italian harpsichord repairman. It was able to play softly or loudly.

The tone depended on how hard the player struck the keys. At the time, this was an amazing technological advancement.

Soon, most aristocrats had a pianoforte in their homes.

The pianoforte went through many revisions during the sixteenth and seventeenth centuries. For example, pedals were added to make different tones.

How does a piano make musical sounds? 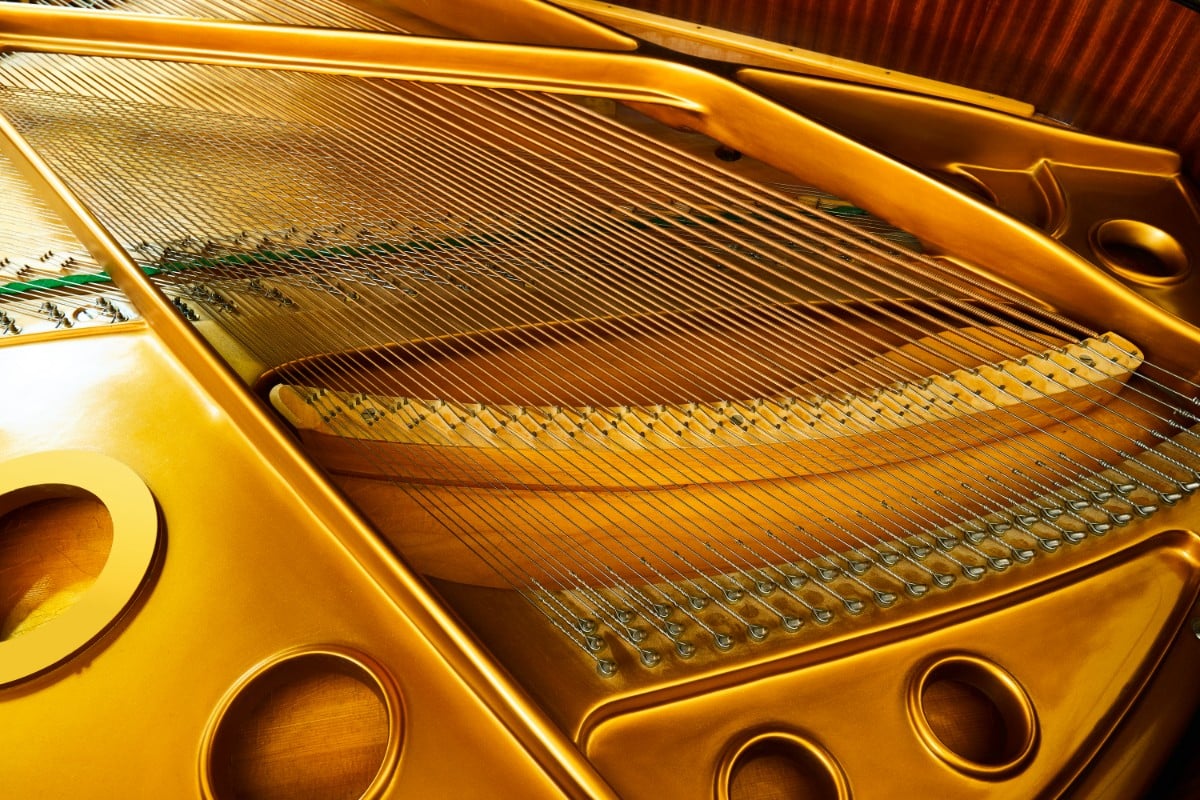 You make musical sounds on a piano by striking the keys on the keyboard. As you press the keys, a hammer strikes the strings inside the piano.

There are three basic parts of every piano, whether it’s a grand piano or an upright.

A piano soundboard produces the rich, resonant sounds you hear from the piano. The standard wood used to make soundboards is spruce, but you can find other types of wood used for soundboards too.

The piano harp is constructed of a cast iron frame. It gets its name because it’s formed in the shape of a harp. The frame holds 30 tons of high-tension steel strings inside the piano.

When you look inside a grand piano, you see the cast iron piano harp positioned above the soundboard.

The action is the part of the piano that puts the hammer into action. As you press the keys on the keyboard, the hammer strikes the string, then falls away, making the string vibrate. Think of the piano keys as levers. A damper stops the vibration when you release the key.

You can change the vibration when the hammer hits the keys by pressing down on the right foot pedal. This lets the string continue vibrating.

How do the three piano pedals work? 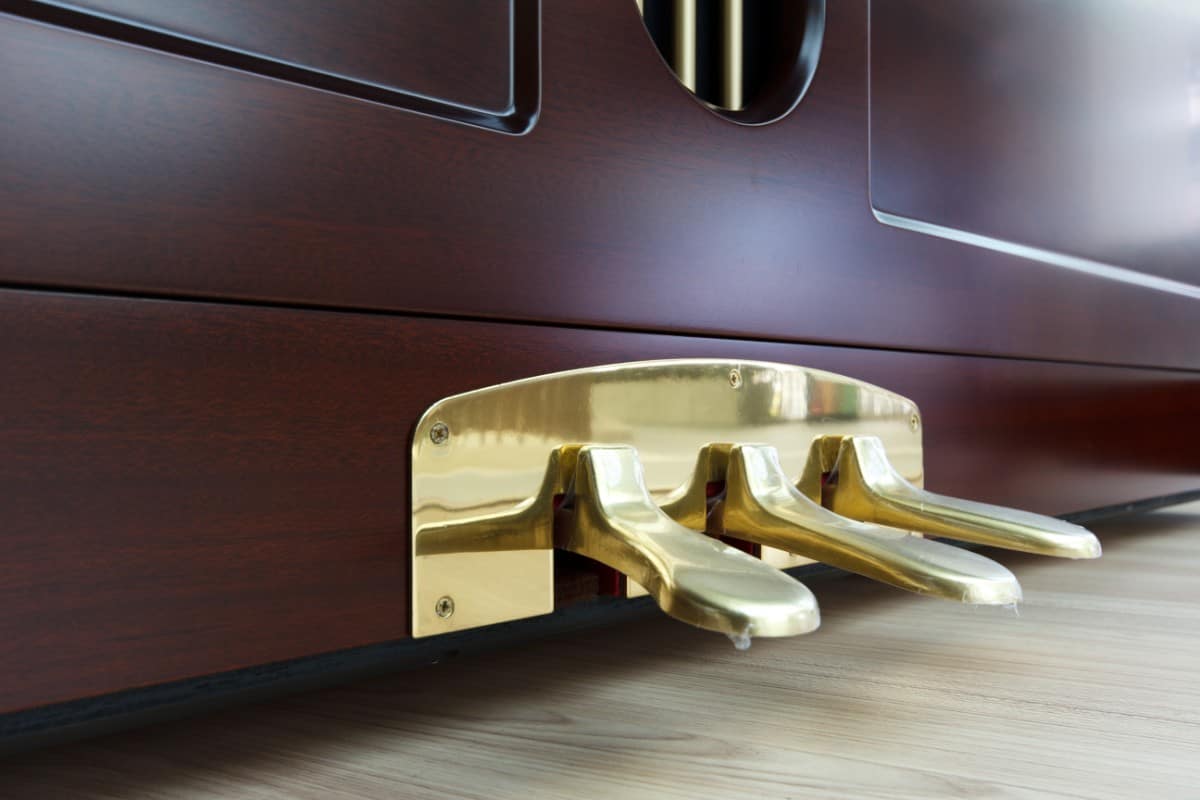 Knowing how to use piano pedals is an art in itself. Using them correctly, adds interest, color, and personal interpretation to the music you play. It takes a lot of practice to play the piano with two hands, read two music staffs, and apply pedal techniques.

If you can do all of these while you play the piano, you’ve developed a musical instinct and feeling that is rarely heard.

The three pedals are the soft pedal on the left, the sostenuto or silent pedal in the middle, and the sustaining or damper pedal on the right.

The damper pedal is the one that creates extended vibrations of sound, and the soft pedal quiets the music.

The middle or silent pedal mutes the sound. This pedal is for practicing.

You have to find the right balance of when to use the pedals. If you’re lucky, the sheet music will have damper pedal marks, so you know when to lift the damper pedal up and down.

If you’re playing delicate music, the soft pedal and the damper pedal are often used at the same time. This keeps the tone quiet while letting the sound continue vibrating.

What is the difference between a grand piano and an upright piano?

The grand piano and the upright piano both have 88 keys and three-foot pedals. Grand pianos have a richer sound than uprights because the soundboard is larger, but both resonate with beautiful music. 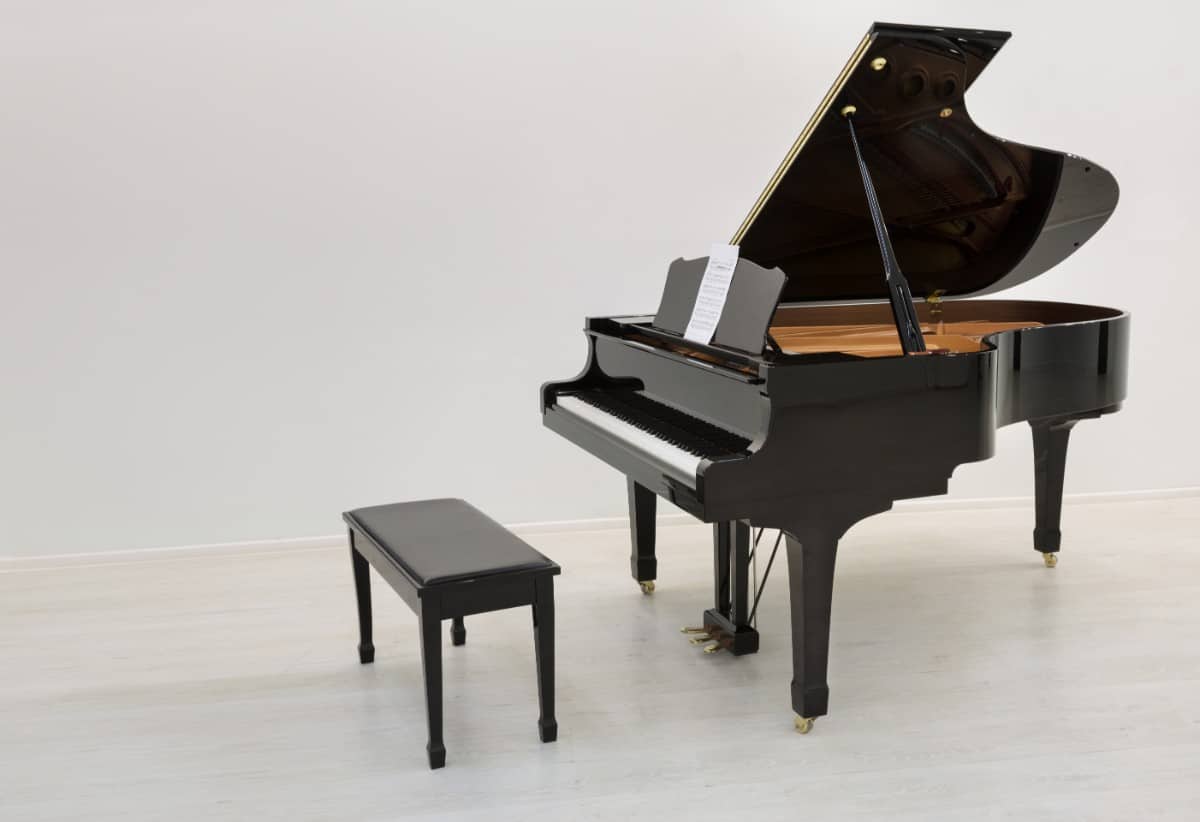 Grand pianos feature soundboards that are laid out horizontally, parallel to the floor. Usually, grand pianos are the most expensive and feature superb key response, rich tones, and powerful sound.

These pianos are the first choice of professional musicians and orchestras.

Not all grand pianos are the same. They are available in various sizes. A Baby Grand piano starts at about 5 feet long, while a Concert Grand piano can be up to 9 feet long.

They also feature a large top that lifts, for more dynamic sound. 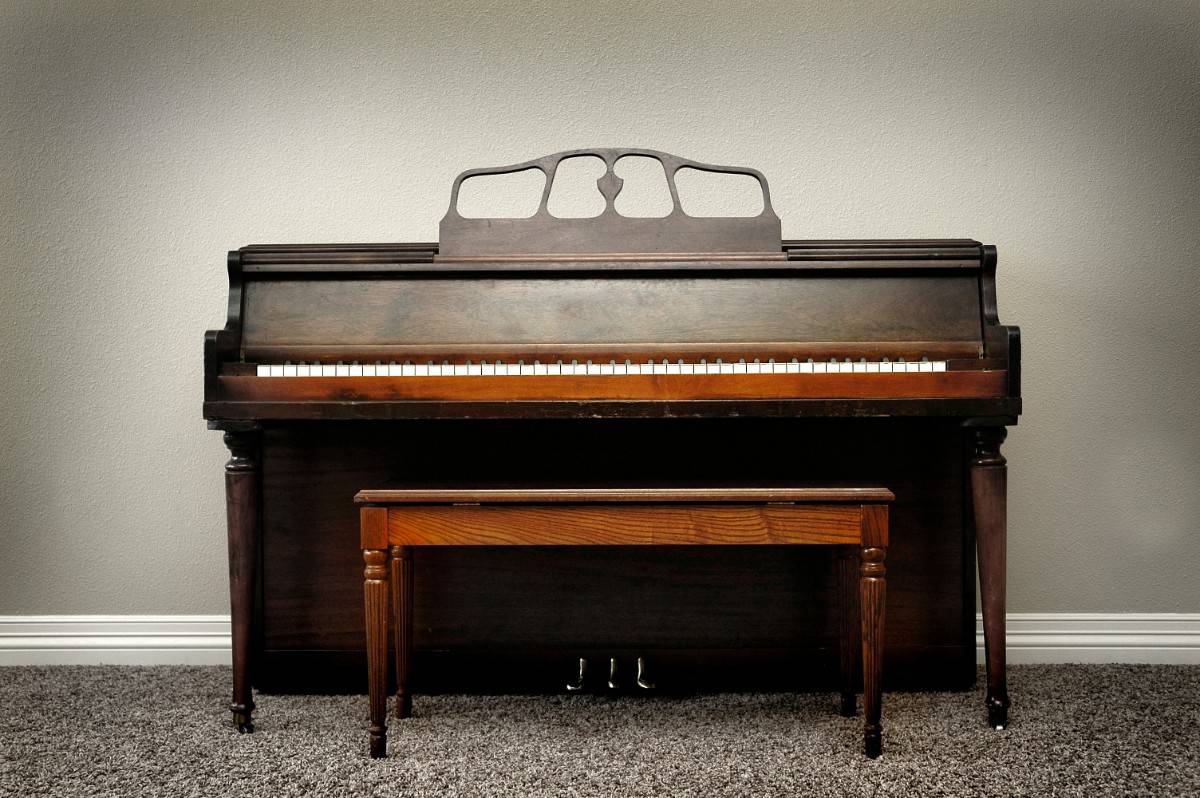 The wooden soundboard on an upright piano is vertical and runs parallel to the wall. The strings stretch downward on the piano harp and the hammers are horizontal.

Upright pianos are available in various sizes. For example, the Spinet piano is about 3 feet wide, while the Studio and Console pianos are usually 5 feet wide.

Is a digital piano a string instrument? 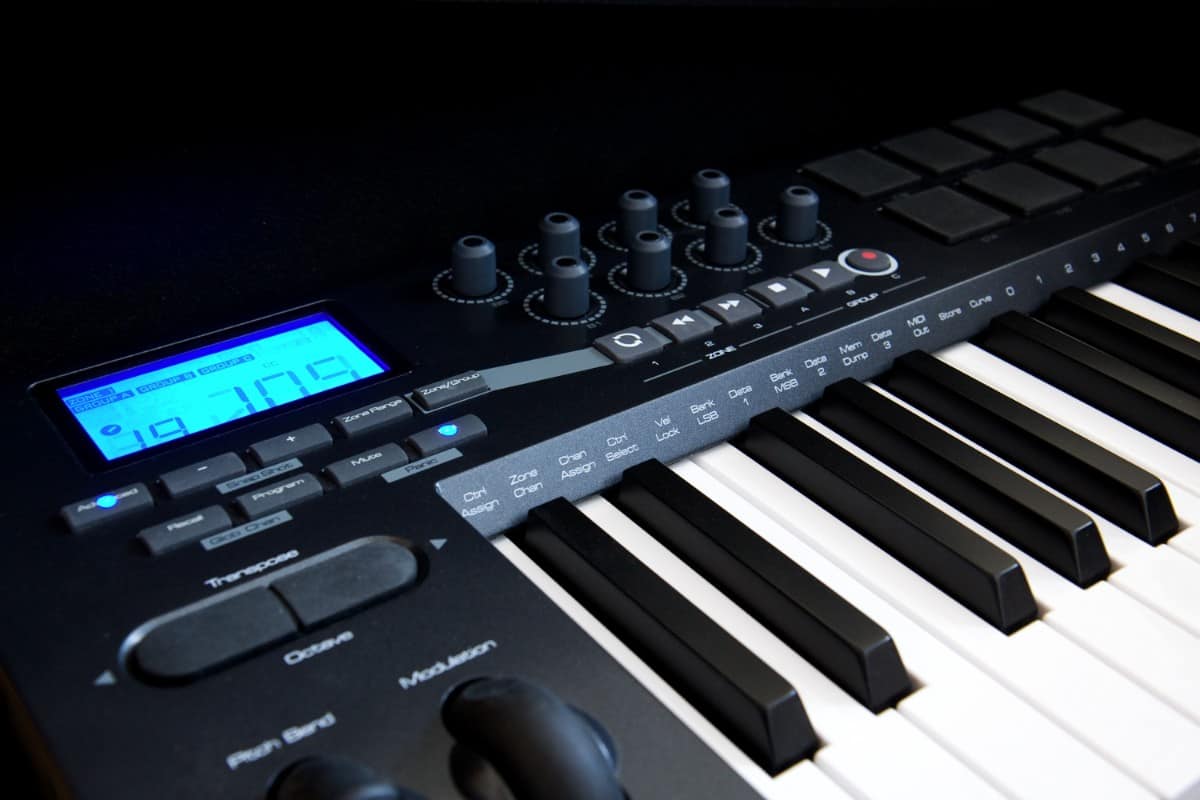 No, digital pianos create sounds electronically, but they look and feel like acoustic pianos. They also need electricity to produce sound. You can also use headphones while you play, so you’re not disturbing anyone else in the room while you practice.

Digital pianos are full-size pianos with a cabinet and foot pedals, just like acoustic pianos. They also have 88 keys that imitate the piano sound. The keys feel the same as piano keys, so you can play any piano music.

Are digital pianos the same as electronic keyboards?

Many people think digital pianos and electronic keyboards are the same instruments, but they’re different.

An electronic keyboard is inexpensive, light, and portable. It features built-in sounds of other instruments that can accompany you as you play. It also has a headphone jack, and many can connect to your computer.

They don’t have a cabinet but use a collapsible stand, or you can just put it on a table to play. Many electronic keyboards are smaller than digital pianos and have fewer keys, so if you want to play piano sheet music, make sure you get a full-size electronic keyboard.

Should I buy an acoustic upright piano or a digital piano for a beginner? 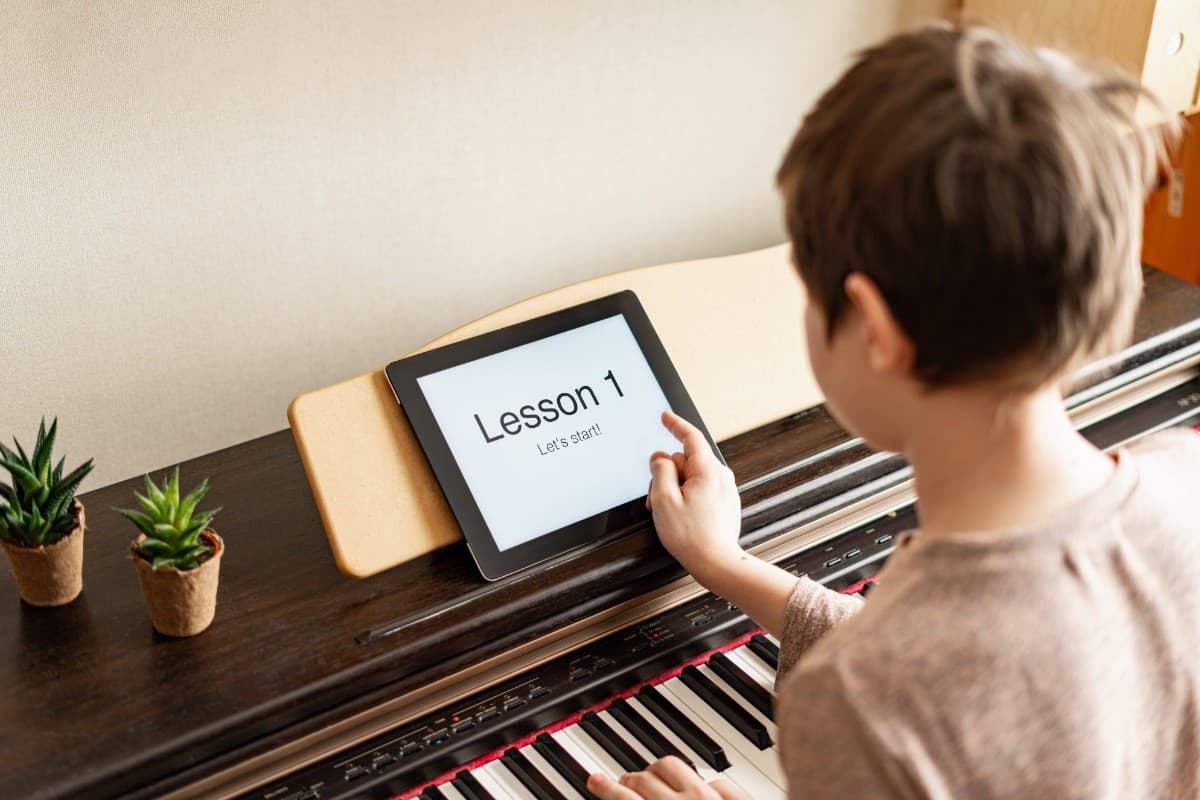 It’s really personal preference which type of piano to purchase for a beginner player. If you’re a traditionalist, then an upright is a superb instrument for beginners to learn piano.

Both upright pianos and digital pianos are perfect for beginners. You also don’t have to worry about purchasing another piano as the player becomes more advanced.

Whether playing concertos, sonatas, waltzes, or pop music, these two types of pianos are outstanding for beginner to advanced piano players.