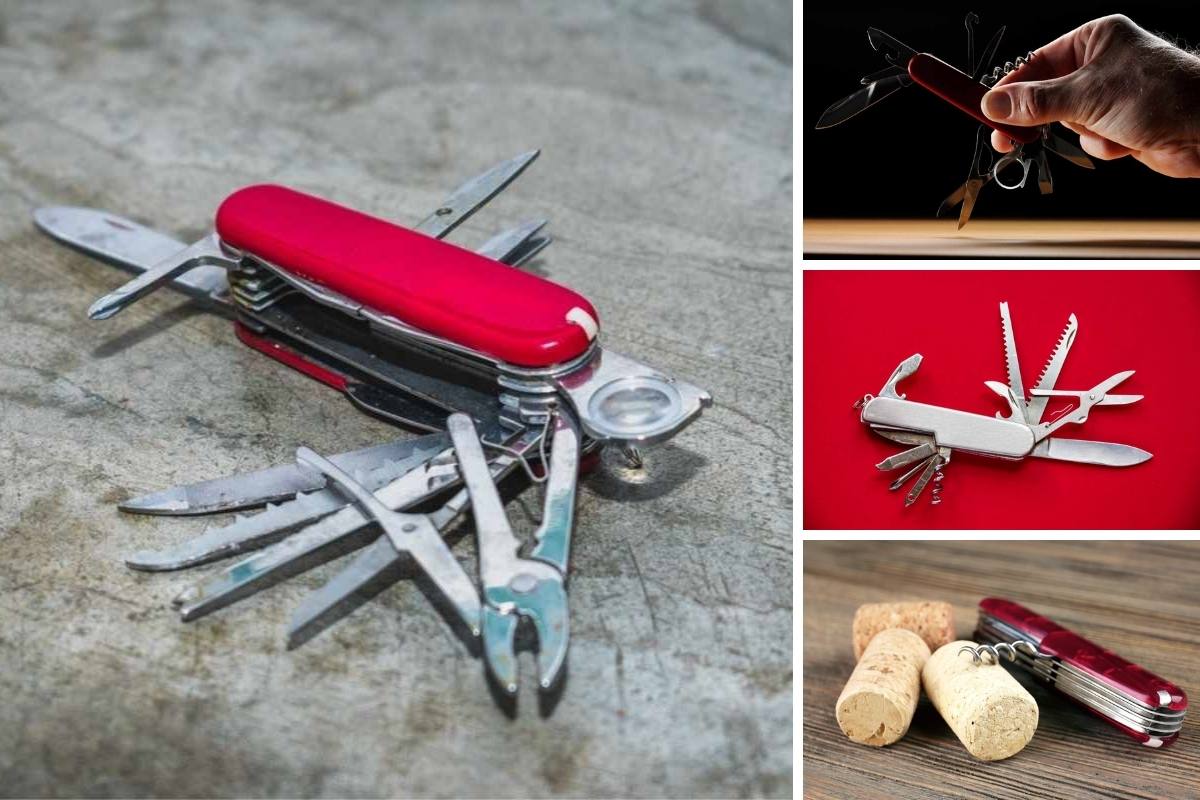 Swiss Army Knives are widely considered one of the most essential tools for outdoor survivalism — or almost any outdoor activity. These all-in-one toolkits have been produced since the 19th century and are still issued to every member of the Swiss military. In this article, we’ll explore all the tools you can generally find on most Swiss Army Knives (and a few less common ones).

What is a Swiss Army Knife?

A Swiss Army Knife — often abbreviated as SAK — is one of the most famous multifunction tools in the world. This device is a small, fold-up compartment with a wide variety of included tools, which can be swung out on a hinge whenever they are needed. Official versions can be recognized by their red case featuring a red cross.

Because of the huge variety of tools included in a Swiss Army Knife, it is considered a highly desirable piece of equipment for campers, hikers, and wilderness explorers. But because of its range of functionality, many people consider it beneficial to carry a SAK at all times.

History of The Swiss Army Knife 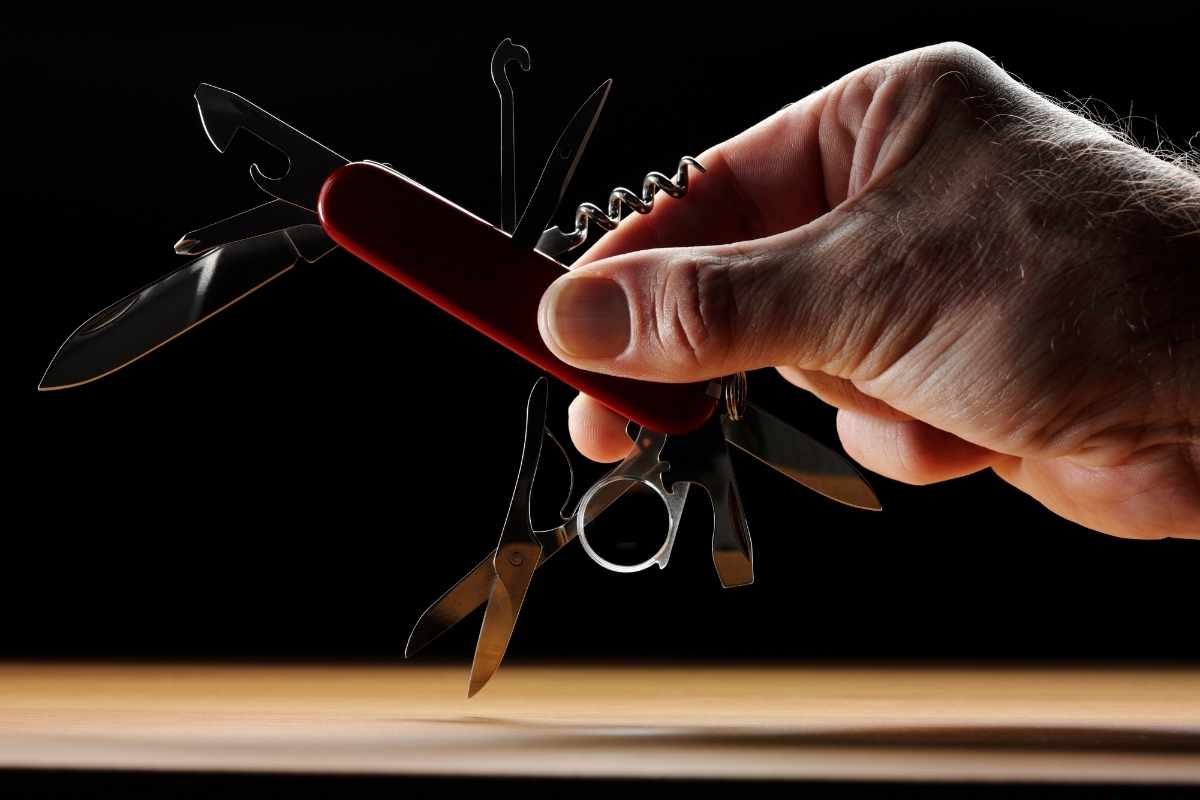 The Swiss Army Knife was first produced in 1891 for mass production for members of the Swiss army, as the name implies. The tool was issued to soldiers and became widely known outside of Switzerland during the First World War. However, English-speaking soldiers had difficulty pronouncing the tool’s official name, Offiziermesser (officer’s knife), and began calling it simply a Swiss Army Knife.

It is worth noting that the variations produced in the 1890s were far from the first multi-tool pocket knives that were used. Similar items were described as early as the 1850s. The original army-issued knife was intended for Swiss soldiers to open canned food and perform regular maintenance on their weapons, which required a screwdriver.

The original 1890 model included a pocket blade, reamer, can opener, and screwdriver. In the next several years, new versions were introduced that included corkscrews and a more efficient spring for opening the knife. The knives were also produced for public use, which helped to spread their popularity to other countries.

Other developments through the first several decades of the 20th century included the use of stainless steel, which was first produced in 1921. Manufacturing eventually passed to two Swiss companies, Wenger and Victorinox. In 2005, the companies merged; Victorinox still manufactures SAKs for both public sale and for military issue to this day.

What Tools Are on a Swiss Army Knife? 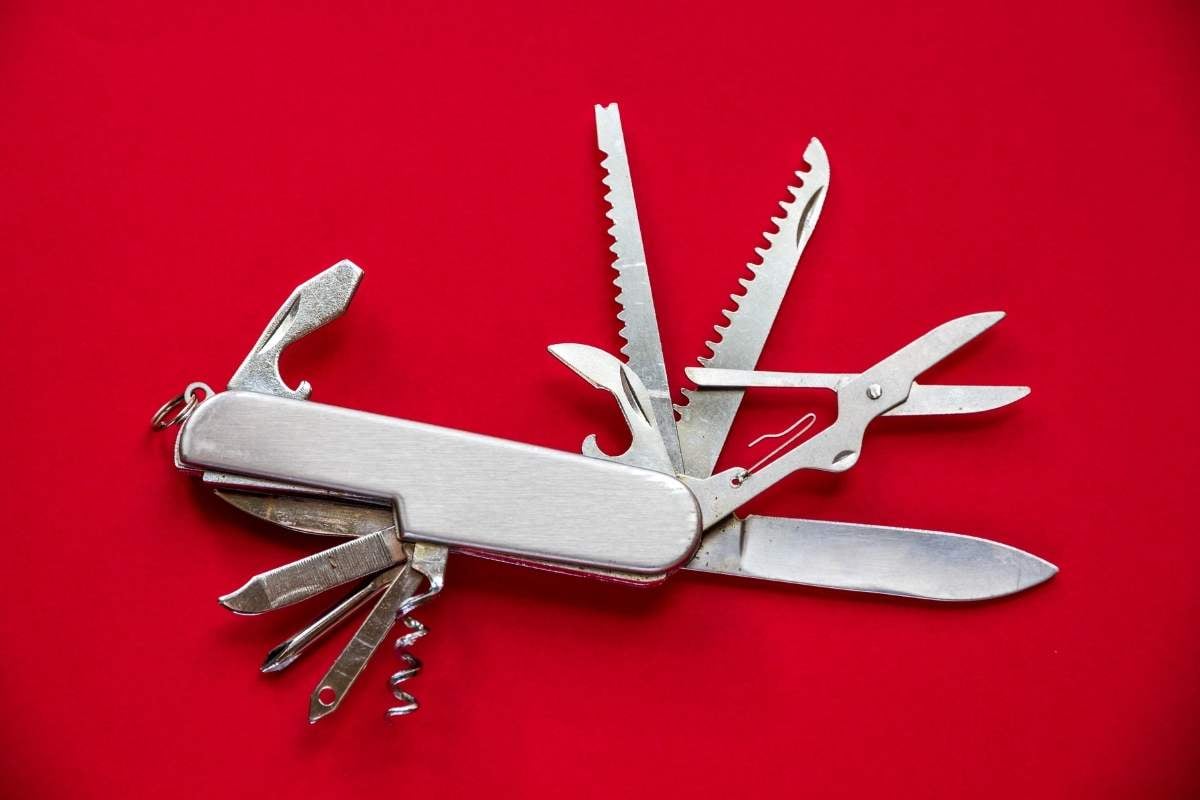 There have been many versions of SAKs, and today, you can even get ones custom-made to include specific tools. So it is hard to say what tools you should expect to be on most knives you come across. Here are a few of the basic tools that most Swiss Army Knives include: 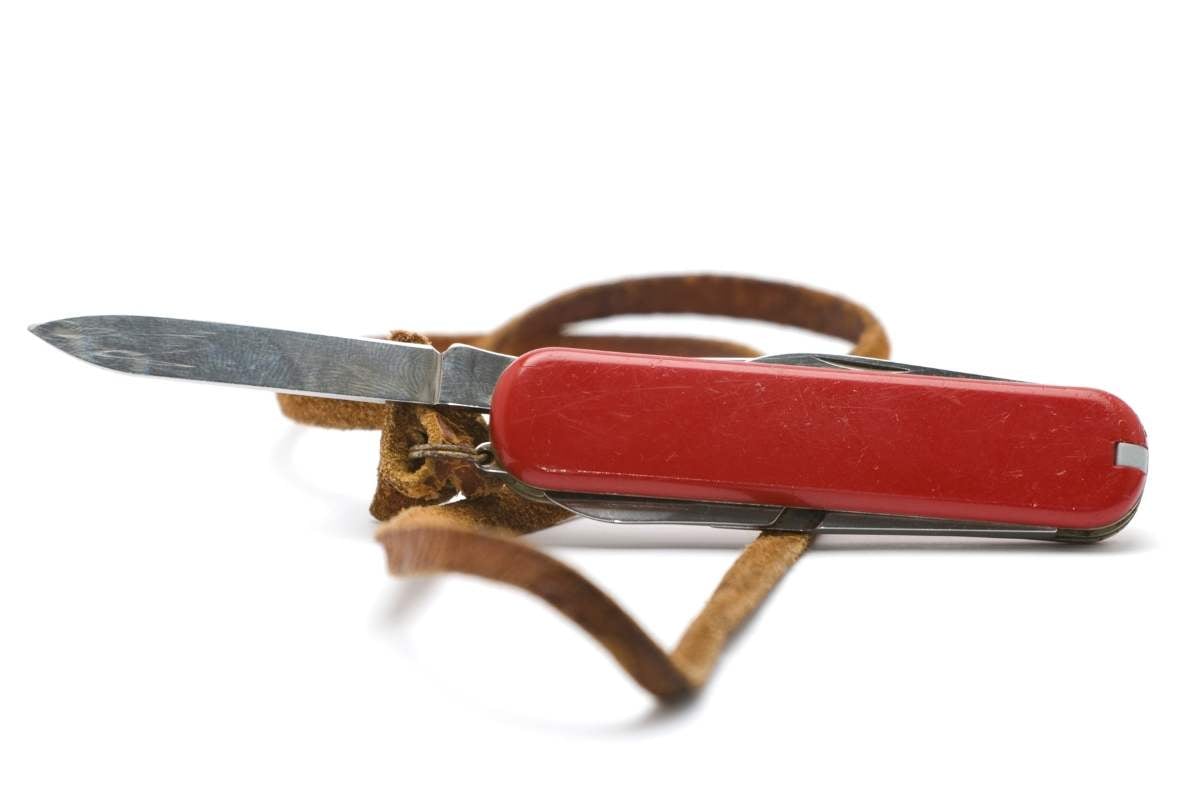 Almost every Swiss Army Knife includes at least one blade, though many include two — one large and one small. Many people look at the smaller blade as a backup for the larger one, which tends to become duller faster because of heavier use. But the smaller knife is also well-suited for a variety of more intricate tasks such as undoing knots, carving wood, opening packaging, or removing splinters.

One of the original uses of SAKs was to help soldiers on the battlefield open canned food, and this is considered a standard tool for most models to this day. These are usually old-fashioned can openers that require you first to puncture the can with the top hook and then unscrew it. 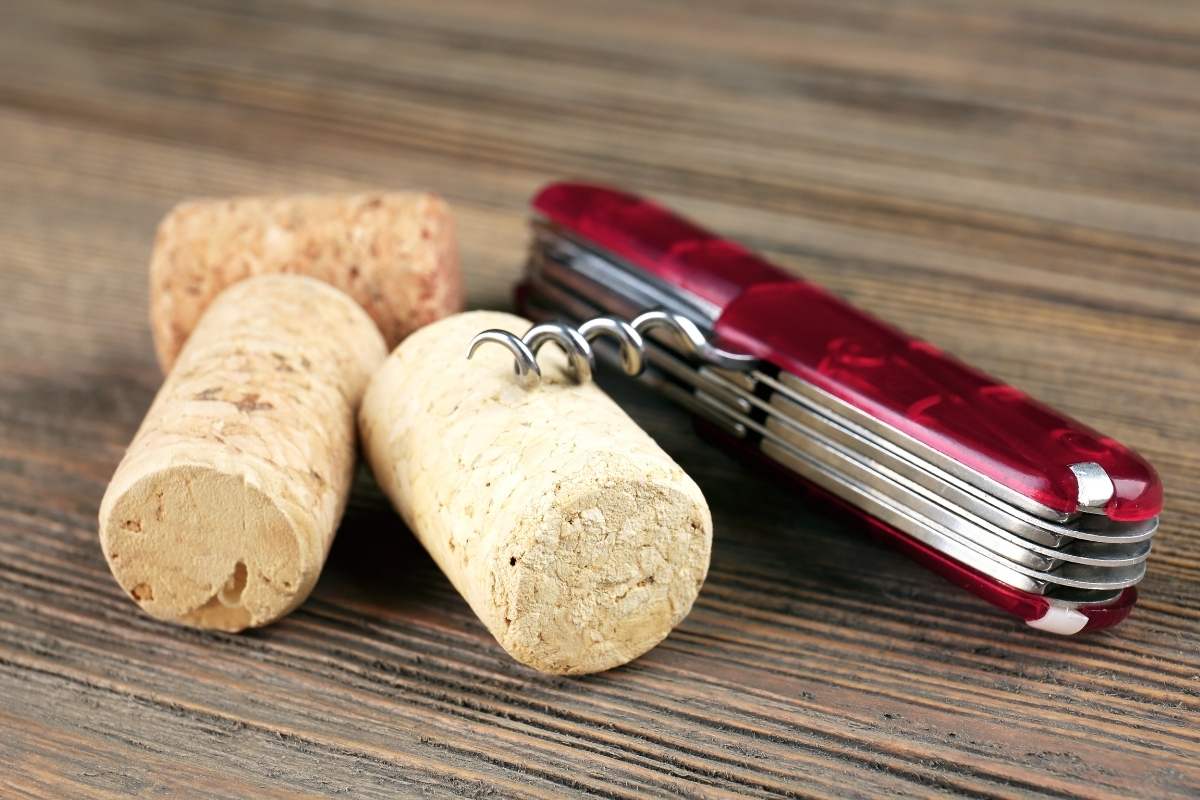 Not every Swiss Army Knife includes a corkscrew, though it is still considered fairly standard. Seasoned outdoorsmen have found many uses for SAK corkscrews aside from simply opening wine bottles. Scope the internet and you’ll find people using them to hand mosquito netting, undo knots, and more.

SAKs are extremely useful for opening prepackaged food, making them an ideal tool for camping or hiking when you are relying on packaged, shelf-stable food that you carry with you. Bottle openers are routinely included on most Swiss Army Knives.

While the original SAKs did not include scissors, they have been included in most models for many years. These small scissors are operated with a spring, which lets them stay open. Some types include a screw or hook so that you can replace the scissors if needed. 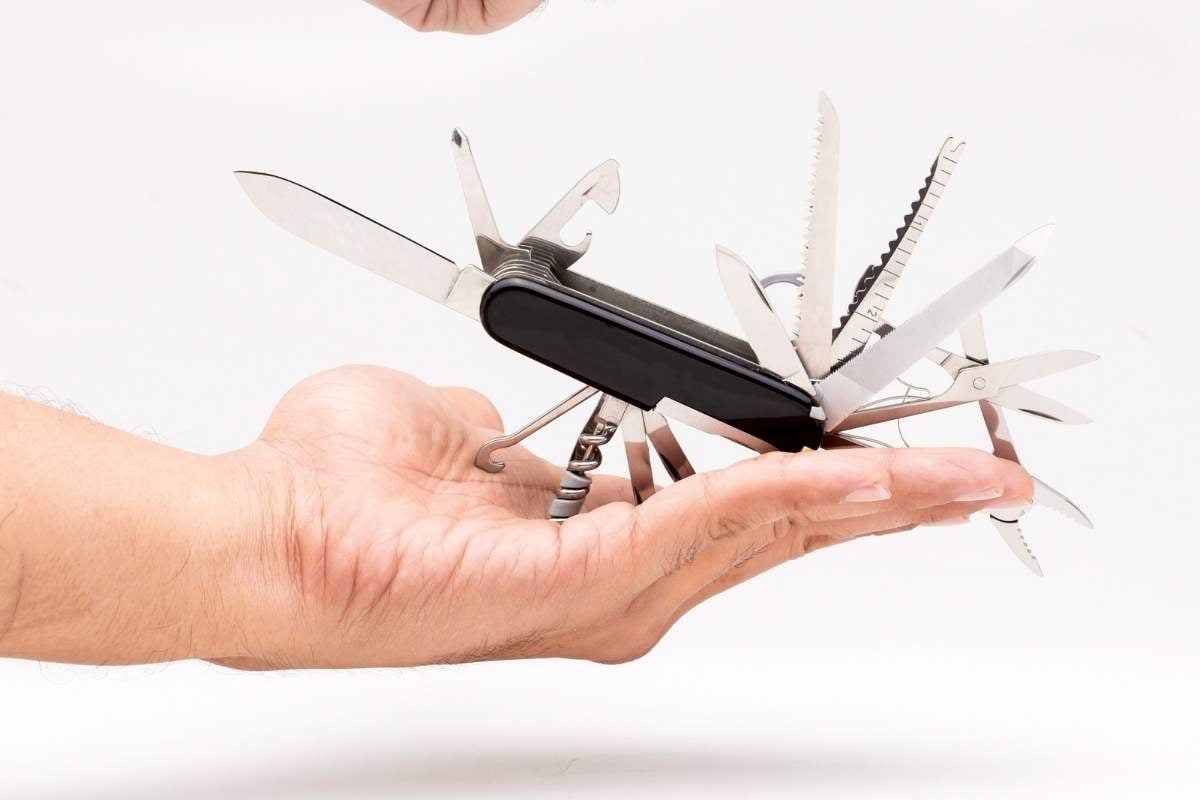 While one of the main uses of SAKs is opening food on campgrounds or battlefields, another is basic hygiene. Tweezers are often included. This can be extremely useful for removing splinters or other debris from your skin.

Some SAKs include a wire stripper tool, often included in the side of the bottle opener. These are used to remove insulation from electrical wires (though creative outdoorsmen have found many other uses for them as well).

Another basic tool of almost any Swiss Army Knife, many models include two or more. These might be a flathead and Phillips head or two of the same variety in different sizes. It’s not uncommon to find a SAK with two Phillip head screwdrivers, one for large screws and one for small ones.

A reamer is a tool for punching holes in thick material such as leather. It can be useful for enlarging holes in materials while camping.

Many SAKs include a multipurpose hook, which can be used to carry several heavy items at once. Some hooks can support up to 200 lbs at a time. 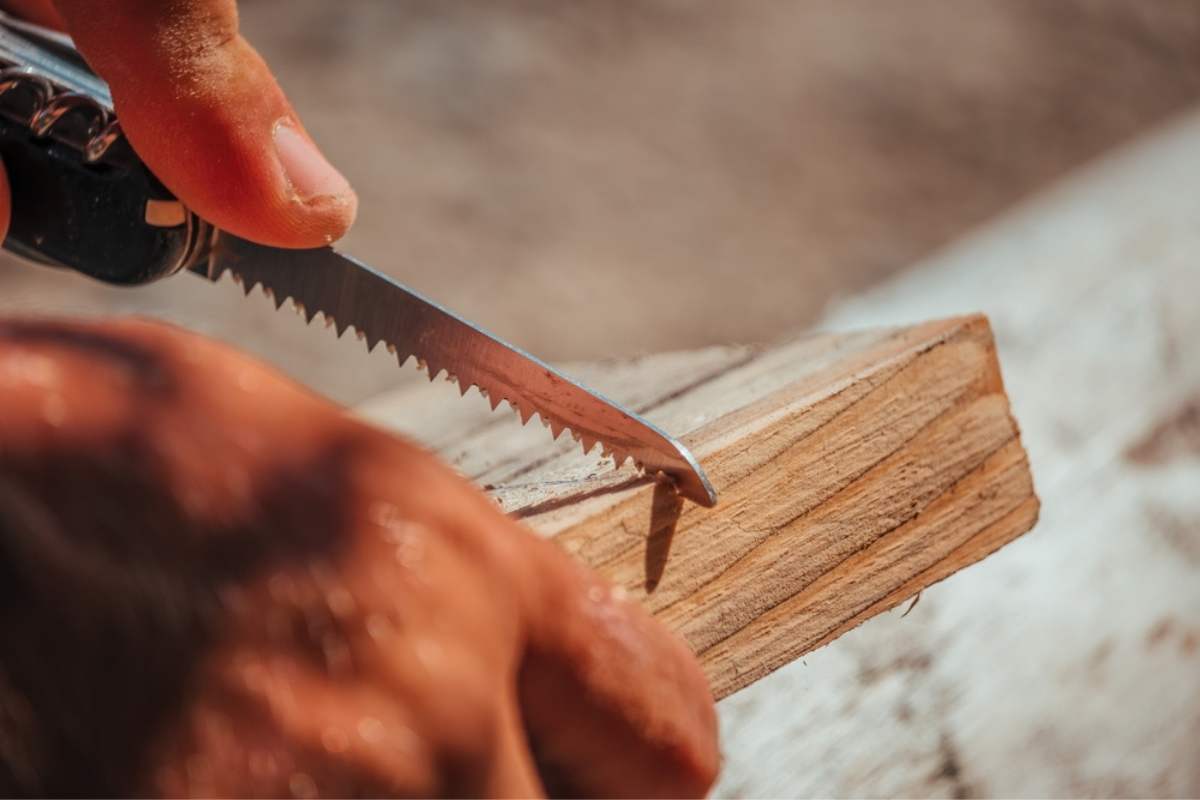 Not necessarily a basic tool on every Swiss Army Knife, a wood saw may be found on many models. This small saw is a miniature version of standard wood saws and can be useful for cutting small pieces of wood.

Some SAKs include a fish scaling tool. This can be useful if you are on a fishing trip or generally trying to live off of the land while you go hiking or camping.

Finding ways to keep your nails clean and trimmed can be a challenge if you are out in nature. Many SAKs feature a nail file that you can use to maintain your nail hygiene wherever you are.

A chisel isn’t necessarily a standard tool in every Swiss Army Knife, but you can find many models that include this handy feature.

Many SAKs feature pliers, which can be extremely useful for many tasks, especially while camping or hiking.

Magnifying glasses aren’t included in every model of SAK, but many of them do include one. This can be especially helpful for doing fine or detailed work such as removing splinters.

Some SAKs include a ballpoint pen. This is usually a pressurized model that lets you write at any angle and in any direction, making it useful for marking things even if you are raising your arms above your head (or upside down for some reason).

Is Every Swiss Army Knife The Same?

Simply put, no. Not every Swiss Army Knife has the exact same tools. The simplest varieties may include basic tools like a single knife blade, tweezers, a nail file, and a toothpick. The most recent versions may include high-tech tools such as digital clocks, laser pointers, LED flashlights, and even flash drives.

The internet has also made it possible to find even more specialized SAKs. These can be customized to include niche tools such as ski wax applicators or scrapers, cigar cutters, choking first aid tools, and whistles. 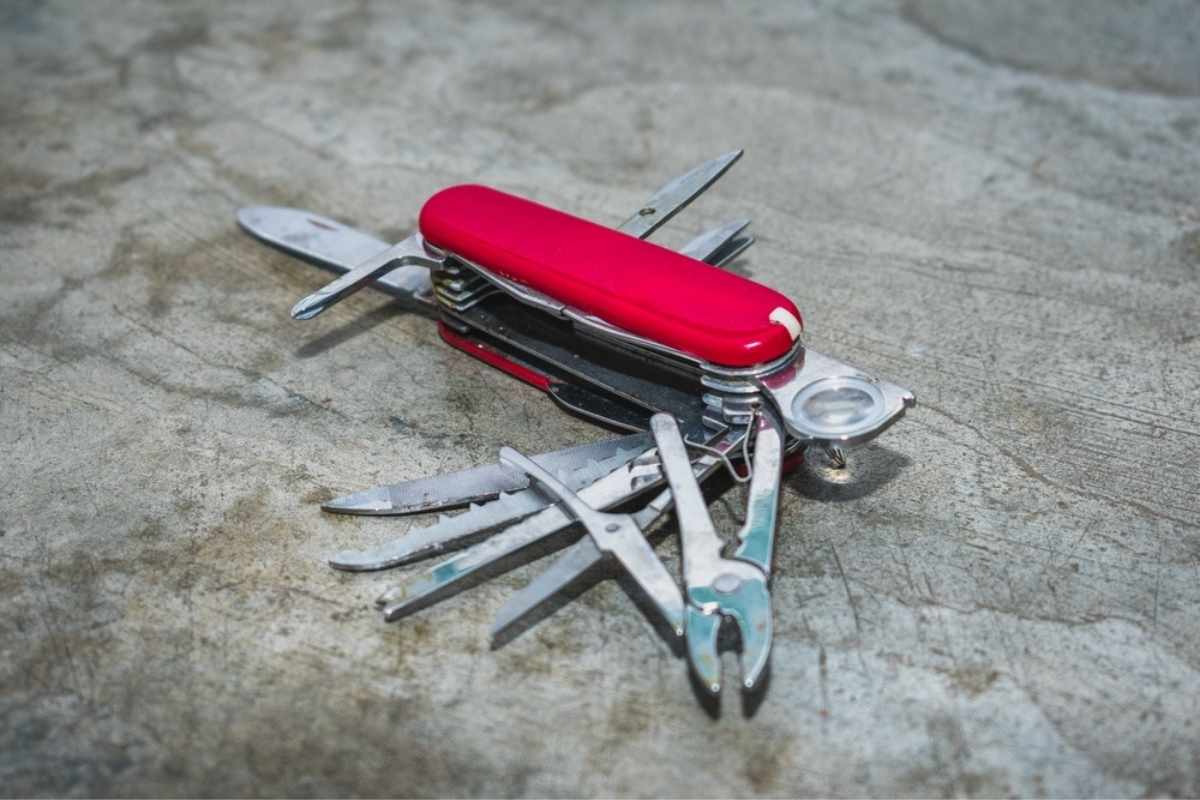 Choosing the right Swiss Army Knife all comes down to your needs. You can find a huge variety of included tools these days and even customize them for yourself. However, many people prefer more basic models with all the standard tools.